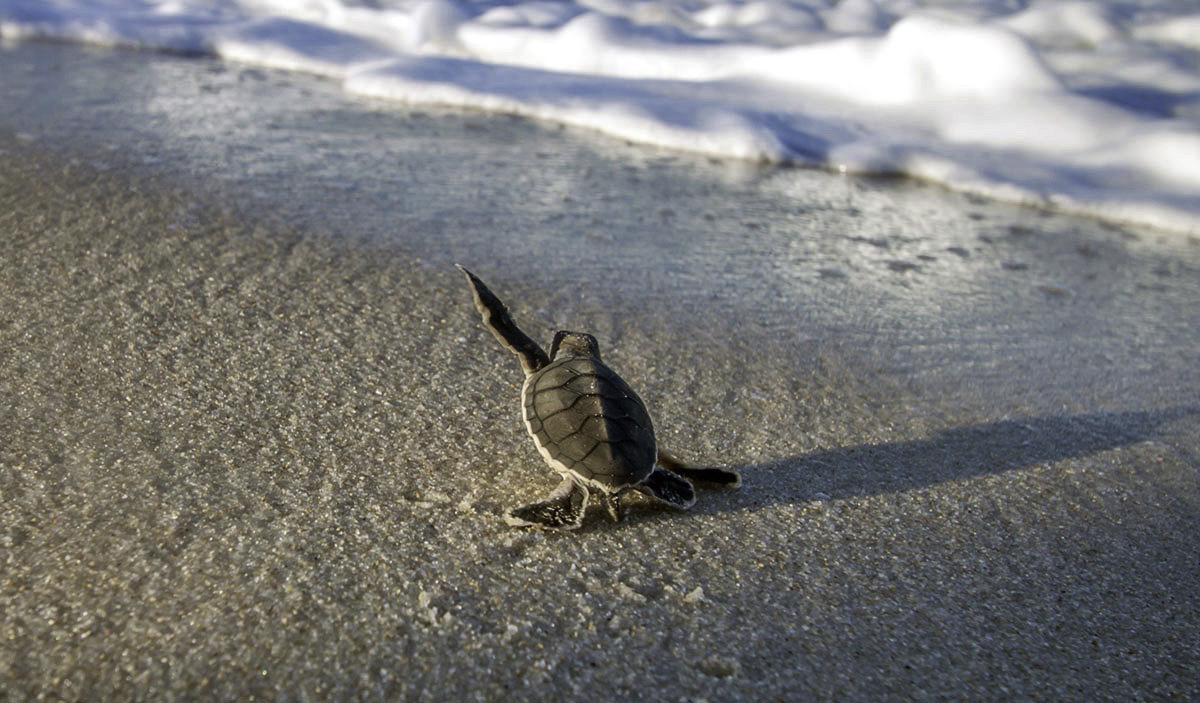 Cover Photo (above) Credit and Caption: Having finally reached the wet, surf-hardened sand, this hatchling is in fast-forward mode on its final sprint to the sea. (Photo courtesy of Courtesy of Boca de Tomates Turtle Camp and Red Tortuguera A.C.)

HATCHLINGS AWAY!
During the most recent period in Earth’s history—the Anthropocene Epoch—human activities have had a profound and irreversible impact on our planet’s climate, the oceans, marine and terrestrial ecosystems, and global biodiversity. We have single-handedly tipped the scales against the survival of our ancient sea turtle mariners. The IUCN Marine Turtle Specialist Group has identified five major threats to sea turtles worldwide: coastal development and widespread habitat loss, climate change, fisheries bycatch, ongoing harvest for meat and eggs, and marine pollution. In the first (#118) of our final three ePostcards in the sea turtle series, I highlight the hatchlings’ perilous journey from the nest to the sea.
Watching sea turtle hatchlings emerging en masse from their sand nest is a reminder of the remarkable resiliency of the natural world—a survival story that continues to unfold today against all odds. The palm-sized hatchlings embark on their first navigation challenge—finding their way to the sea— the moment they emerge from the nest. Before you imagine the hatchlings duck-diving wave after wave as they fearlessly head out to sea, you must also remember that to reach the relative safety of the water they must survive the rogue’s gallery of potential predators that gather on the nesting beaches at hatching time. As you saw in the video in ePostcard #117, hatchling emergence is a largely cooperative effort, but getting to the sea safely is a race against time on a beach fraught with danger. Being part of a “hatchling herd” provides a slight measure of protection (the group advantage) by overwhelming predators with the sheer bounty of easy prey.
Before the sand-to-sea marathon gets underway, hatchlings pause just long enough to get their bearings in the strange new world they find themselves in. Hatchlings mostly rely on visual cues to find their way, but their sense of smell and hearing may also help with orientation. Most hatchlings emerge after sunset or during the night, when temperatures are cooler, and tend to move as a group in the brightest direction. On a beach without interference from artificial light sources, the brightest direction is the visible horizon and the sky’s reflection on the surface of the ocean. Hatchlings do not depend on the moon or the stars to lead them seaward and their sea-finding strategy works at night or during the day, during any phase and position of the moon, and with or without cloud cover. For hatchlings unlucky enough to start life on a beach awash with artificial light pollution and a distracting cacophony of urban sounds, their instinctual sea-finding cues may lure them towards the brighter artificial light sources, often with deadly consequences.
Thousands of hatchlings and occasional adults are killed each year in light polluted areas along the Atlantic seaboard of North America. Managing light pollution is especially important along Florida”s beaches, where approximately 90% of all sea turtle nesting in the United States takes place. The growing popularity of light-emitting diode (LED) lamps prompted wildlife biologists to determine how LED lighting colors, brightness, and the light-throw direction affects wildlife, including migration and attraction, predator-prey relationships and circadian rhythms. They found that the worst nighttime LED lights are those with intense blue and white colors, and those were shown to be three times more disruptive and disorienting than those designed with amber, yellow or green wavelengths. This finding is important because LED lights, which conserve energy and last longer than other lamps, are expected to surpass more than 70 percent of the global lighting market in 2021. Thankfully, animal-friendly lighting is finally gaining ground thanks to community-driven conservation efforts and dark sky campaigns. 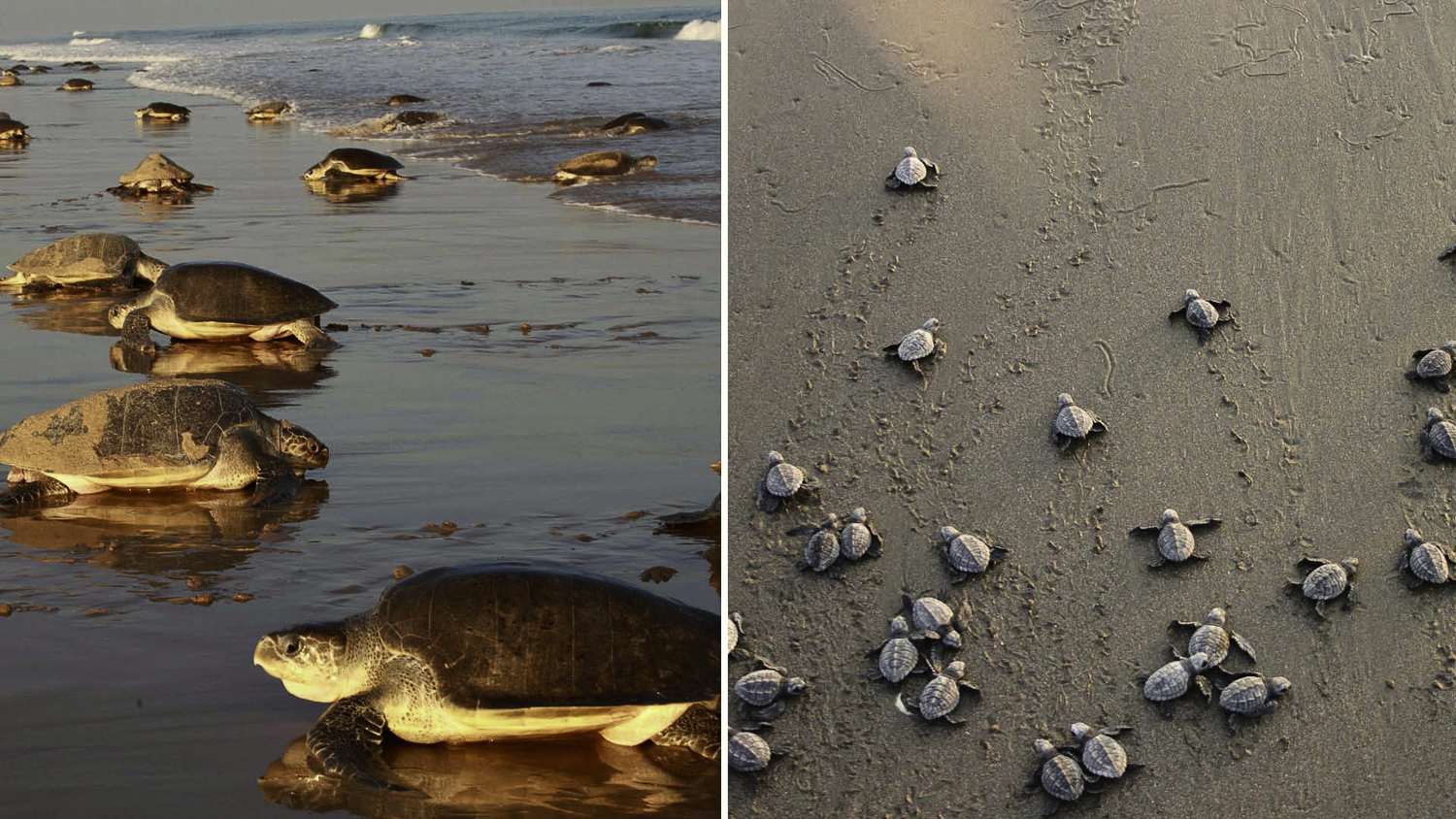 #2. Photo Credit and Caption: Courtesy of Travel + Leisure India and the Velas Turtle Festival organizers. Caption: The lefthand photo shows female olive ridleys arriving and departing their nesting beach as part of the mass nesting event known as an arribada. On the right you see freshly emerged olive ridley hatchlings heading towards the sea. Females reach sexual maturity at about 15 years of age and nesting activity occurs in many coastal locations around India. The beaches at Odisha are famous for hosting one of the largest arribada aggregations in the world.  During an arribada, thousands of females may nest over the course of a few days to a few weeks. Arribadas occur in Mexico, Nicaragua, Costa Rica, Panama, Australia, India and parts of Africa. The largest ones occur in Costa Rica, Mexico, and India. Nicaragua has a significant beach in La Flor Wildlife Refuge. Other solitary nesting areas include Guatemala, Brazil, Myanmar, Malaysia, and Pakistan. Worldwide, olive ridleys nest in approximately 40 countries. 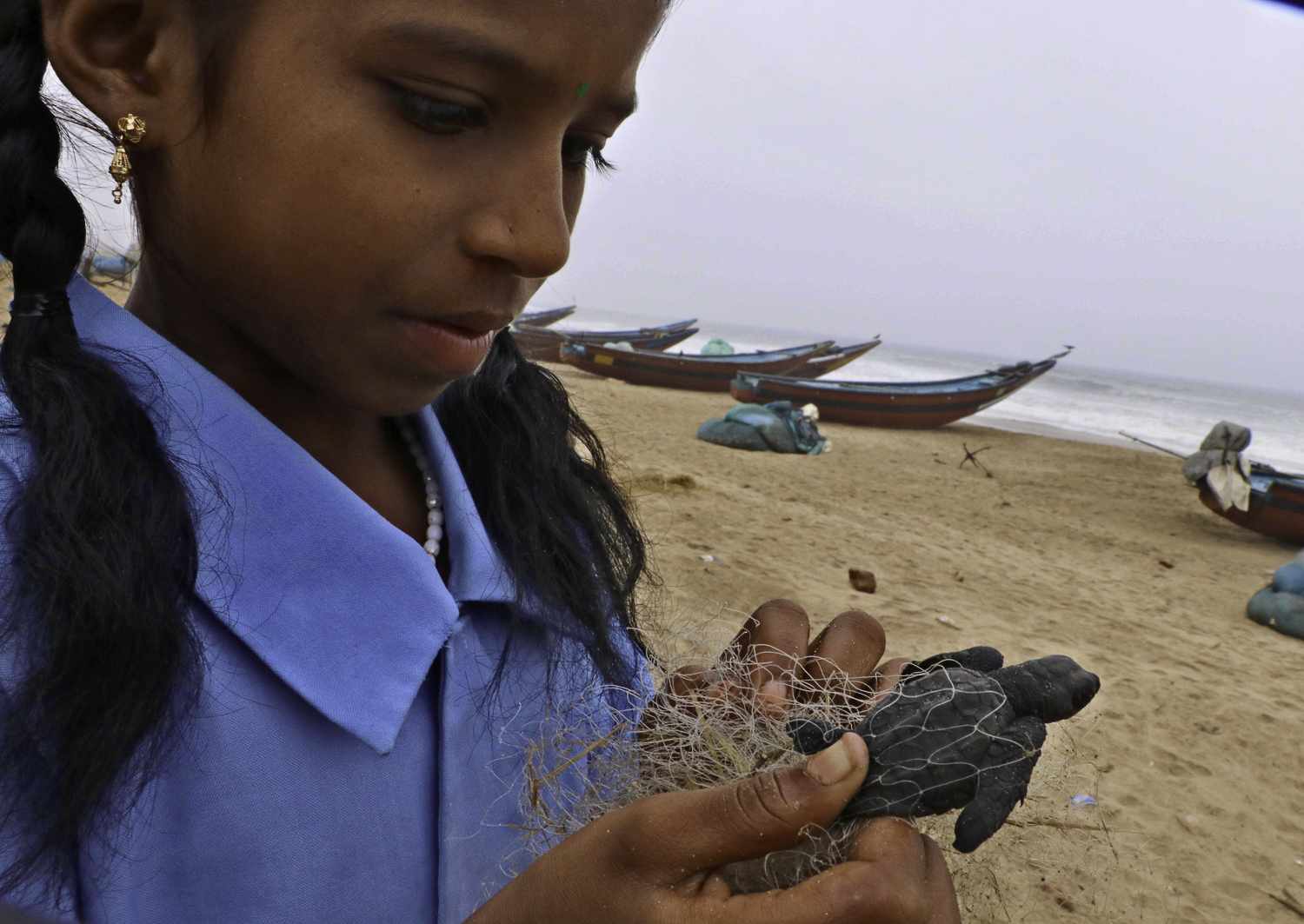 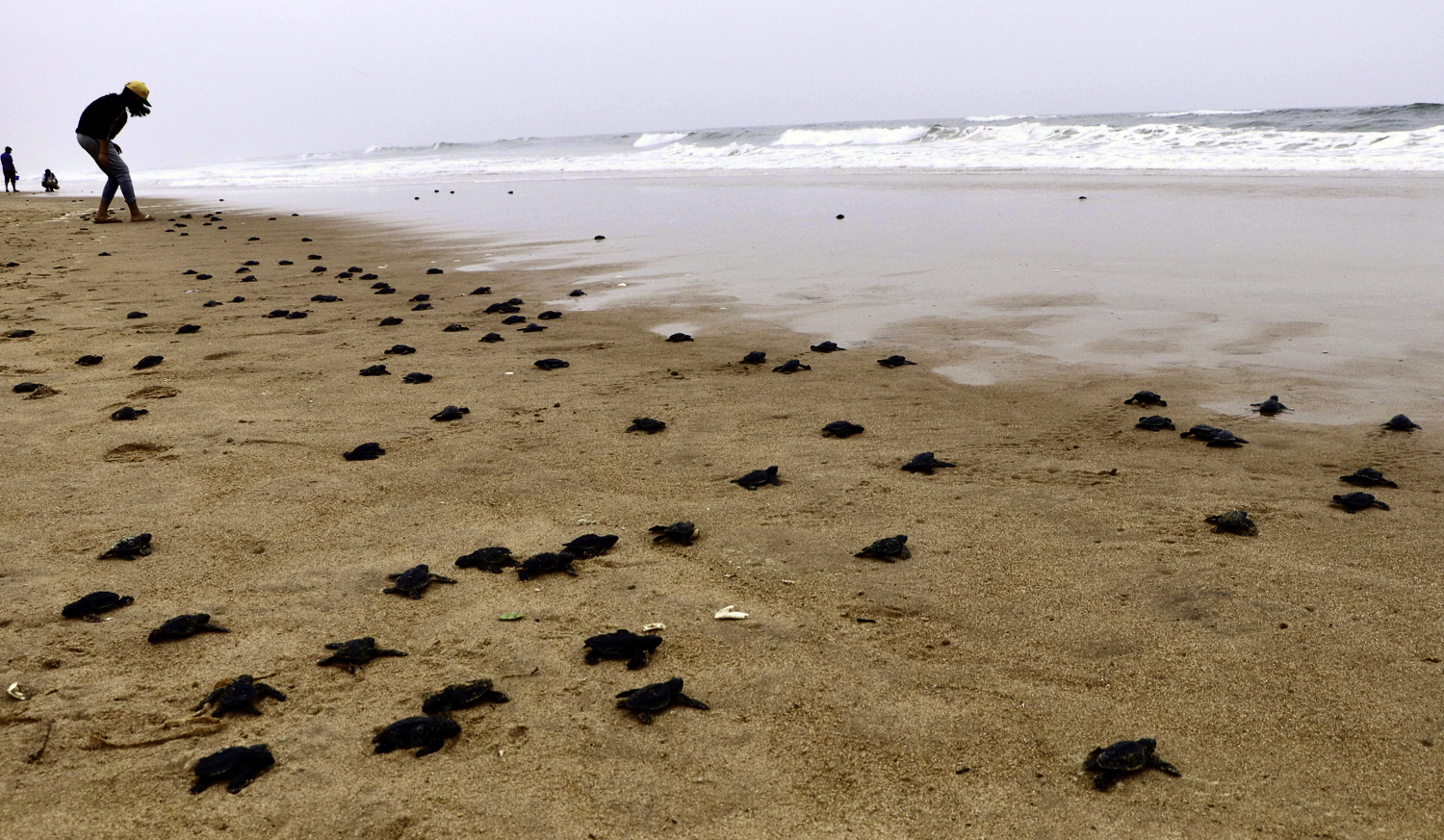 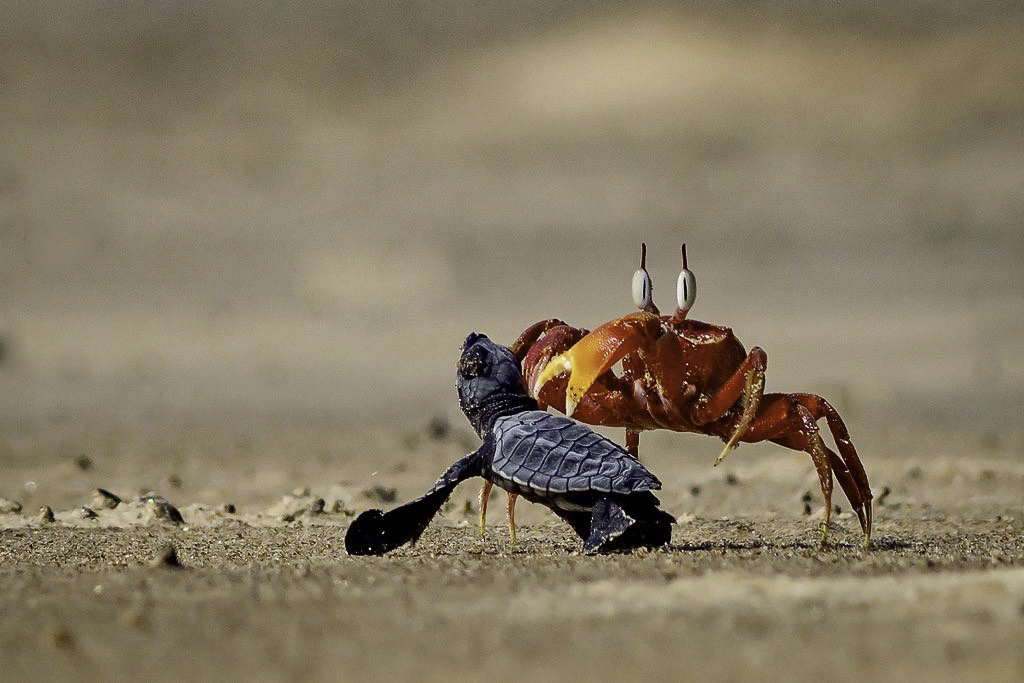 Photo Credits #3, #4 and #5. Courtesy of Shamim Qureshy| (EPS), The Hindu and The New India Times.
A student volunteer in India, a member of the Students Sea Turtle Conservation Network (SSTNC), carefully disentangles an olive ridley hatchling from a discarded fishing net on Rushikulya Beach near the village of Podampetta. It’s estimated that commercial fisheries in the Indian Ocean contribute to the deaths of thousands of sea turtles each year, most of which become entangled in discarded fishing gear or trapped in longlines, gill nets and shrimp trawls. Throughout the world, even in countries where sea turtles are protected under laws, they continue to be killed and traded on the global market for their meat and eggs, oil for traditional medicines, as a source of exotic leather (leatherbacks), and for their beautiful shells (hawksbills).
From the minute the olive ridley hatchlings emerge from their nests they will met by a gauntlet of predators, including seabirds, vultures, crows, feral dogs and remarkably aggressive ghost crabs. This ghost crab is about to grab a hatching with its claws to keep it from escaping into the water. Under the watchful eyes of these SSTCN volunteers, the key beaches along India’s Odisha coastline will be patrolled during the hatching season to redirect disoriented hatchlings and provide a measure of protection against predators. 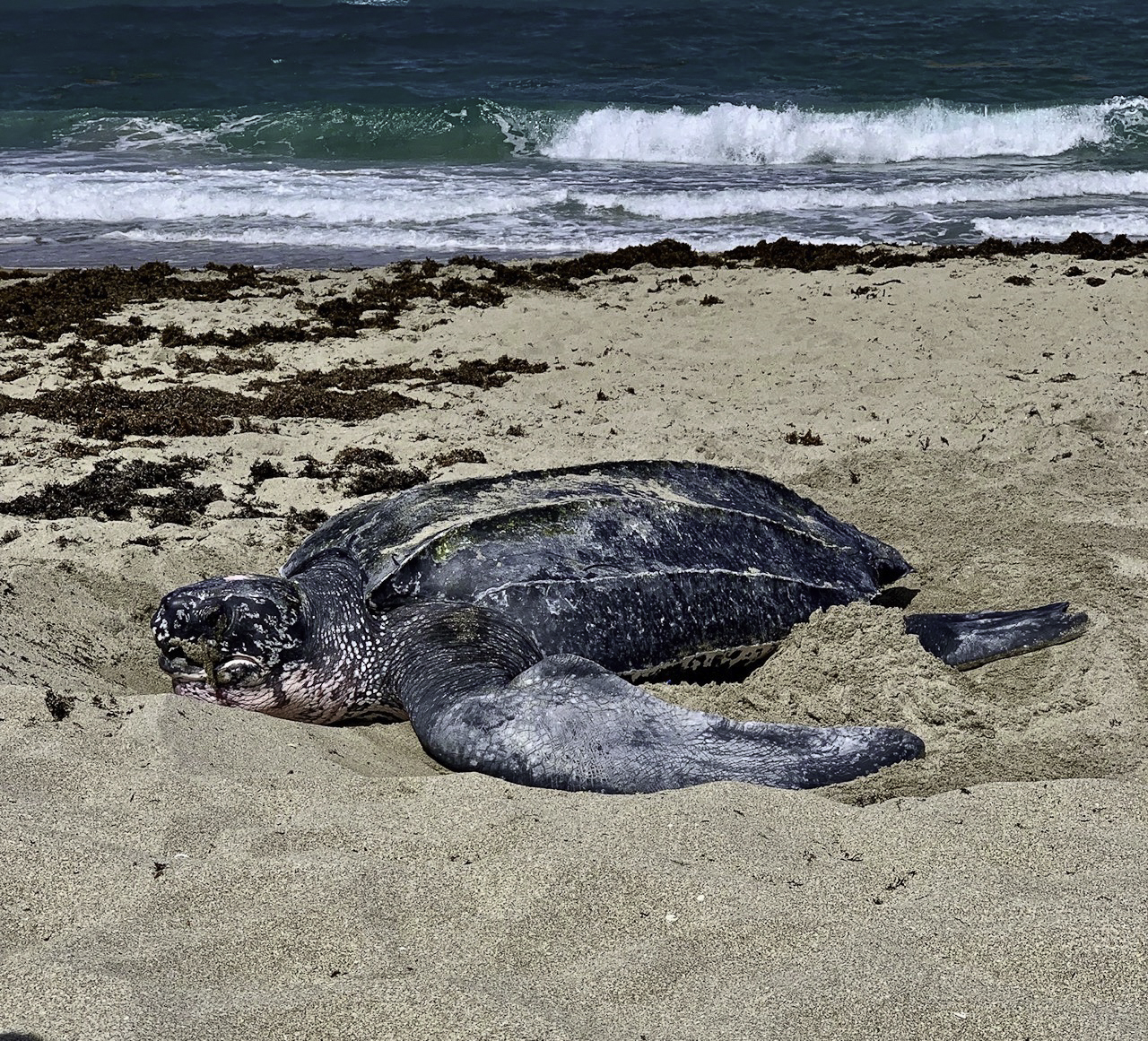 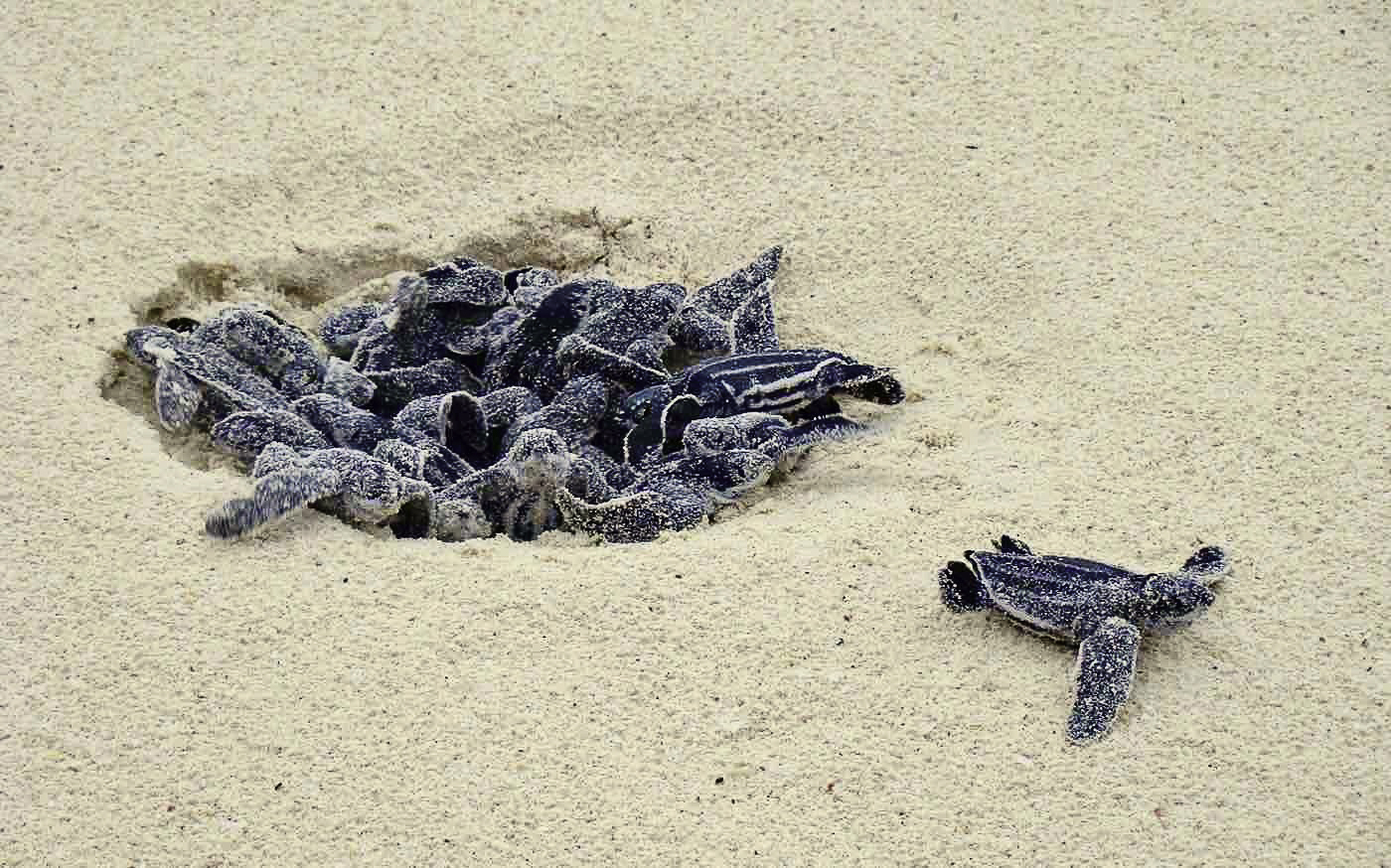 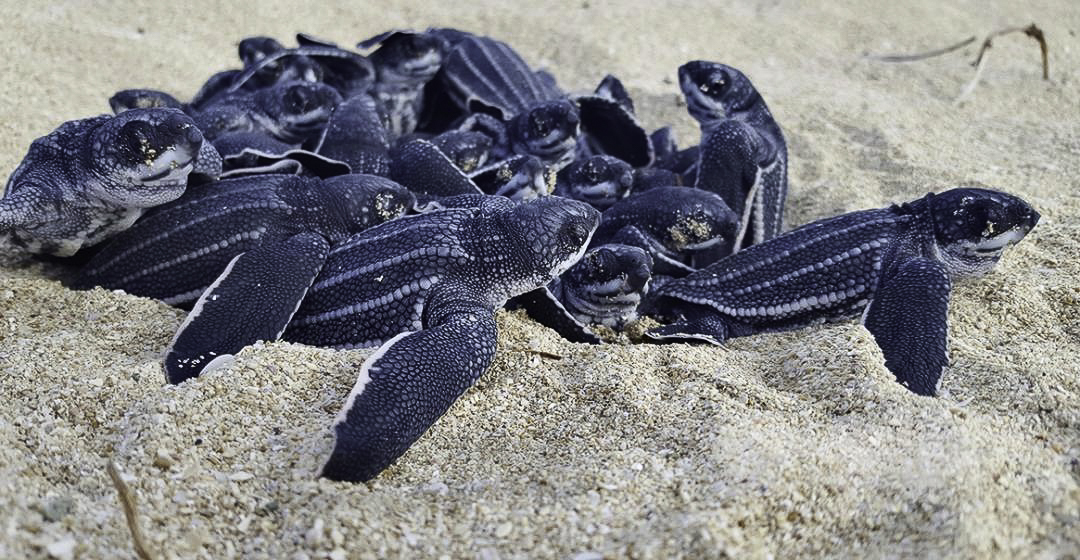 Caption: The mass emergence behavior of turtle hatchlings—a “boil” of leatherbacks in these photos—is an effective strategy (called “predation dilution) that appears to improve hatchling survival rates in areas with higher densities of predators. 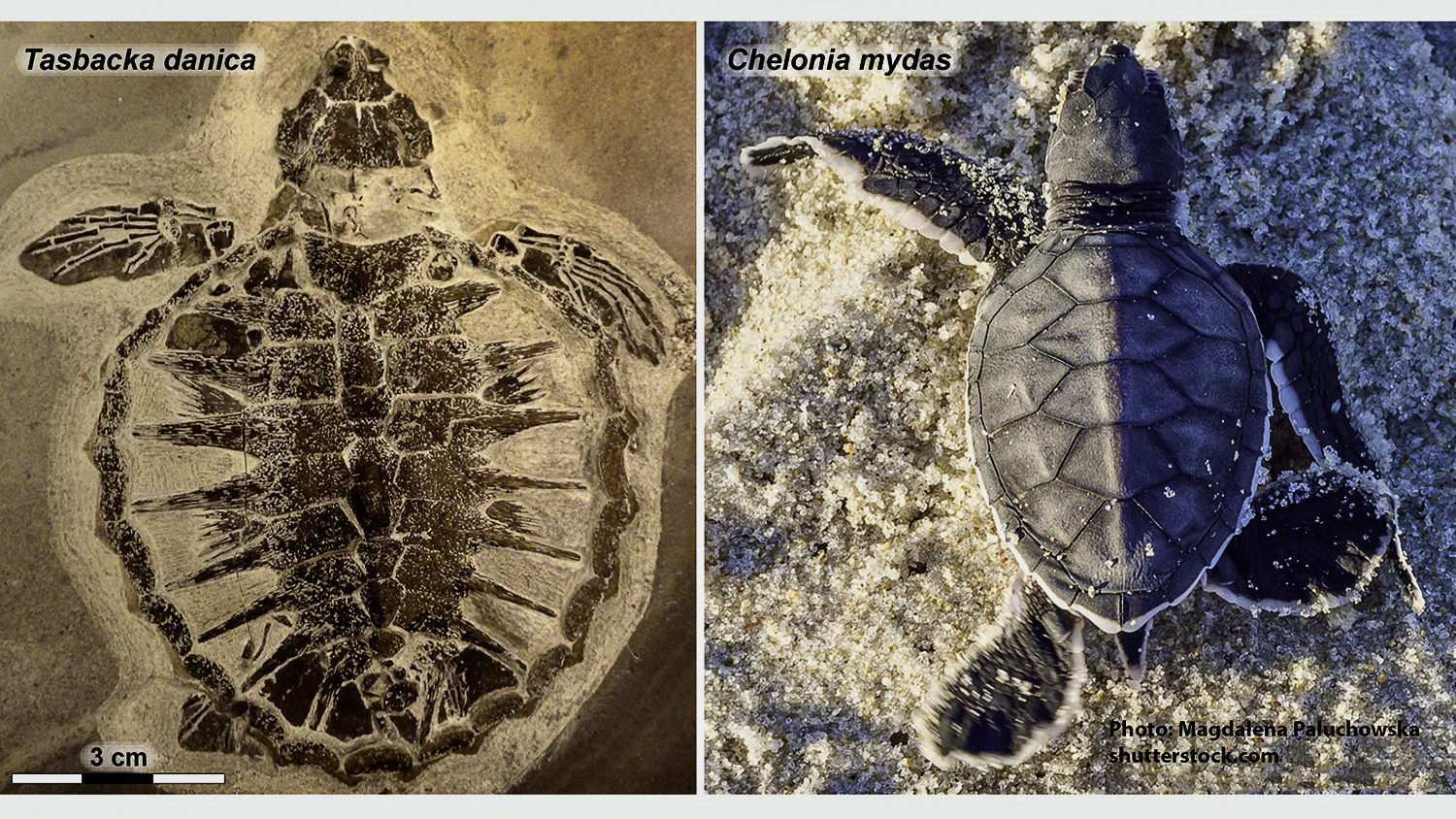 Caption: Researchers from North Carolina State University, Lund University in Sweden and the University of Hyogo in Japan have retrieved original pigment, beta-keratin and muscle proteins, from a 54 million-year-old sea turtle hatchling. The work adds to the growing body of evidence supporting persistence of original molecules over millions of years and also provides direct evidence that a pigment-based survival trait common to modern sea turtles evolved at least 54 million years ago. The shells of modern sea turtle hatchlings, like this green sea turtle hatchling, are dark colored – pigmentation that gives them protection from aerial predators (such as seagulls) as they float on the ocean surface to breathe. Since turtles are reptiles, and therefore cold-blooded, the dark coloration also allows them to absorb heat from sunlight and regulate their body temperature. This elevated body temperature also allows more rapid growth, reducing the time they are vulnerable at the ocean surface.
HATCHLINGS AND LIGHT POLLUTION 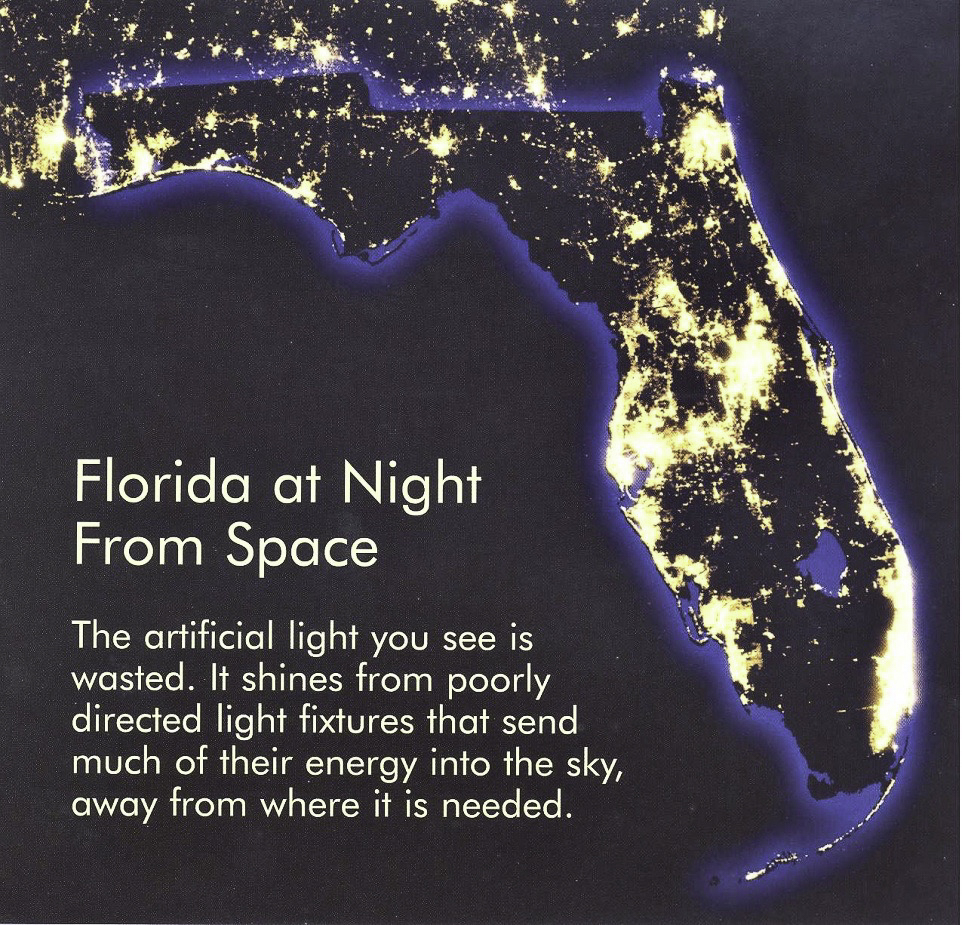 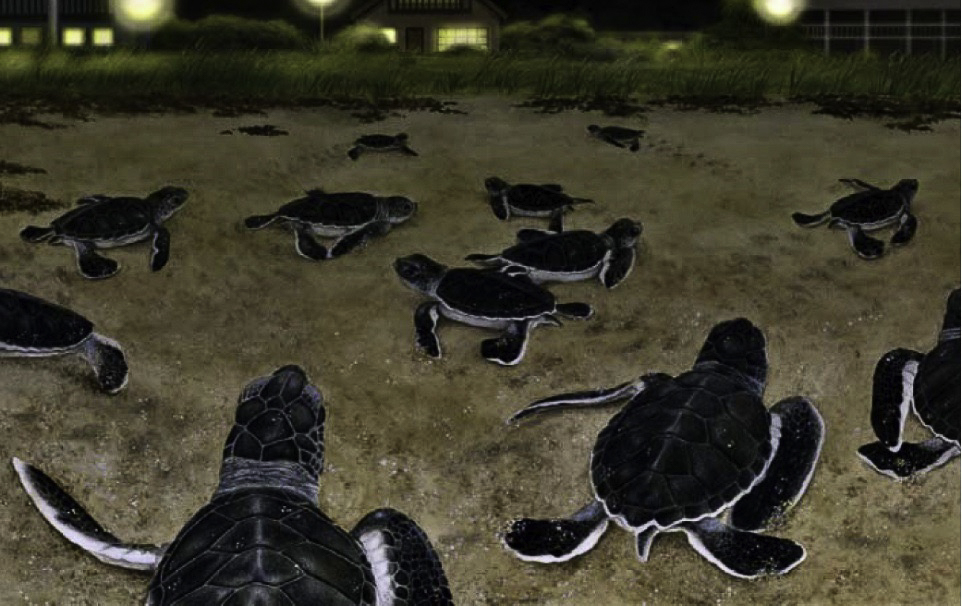 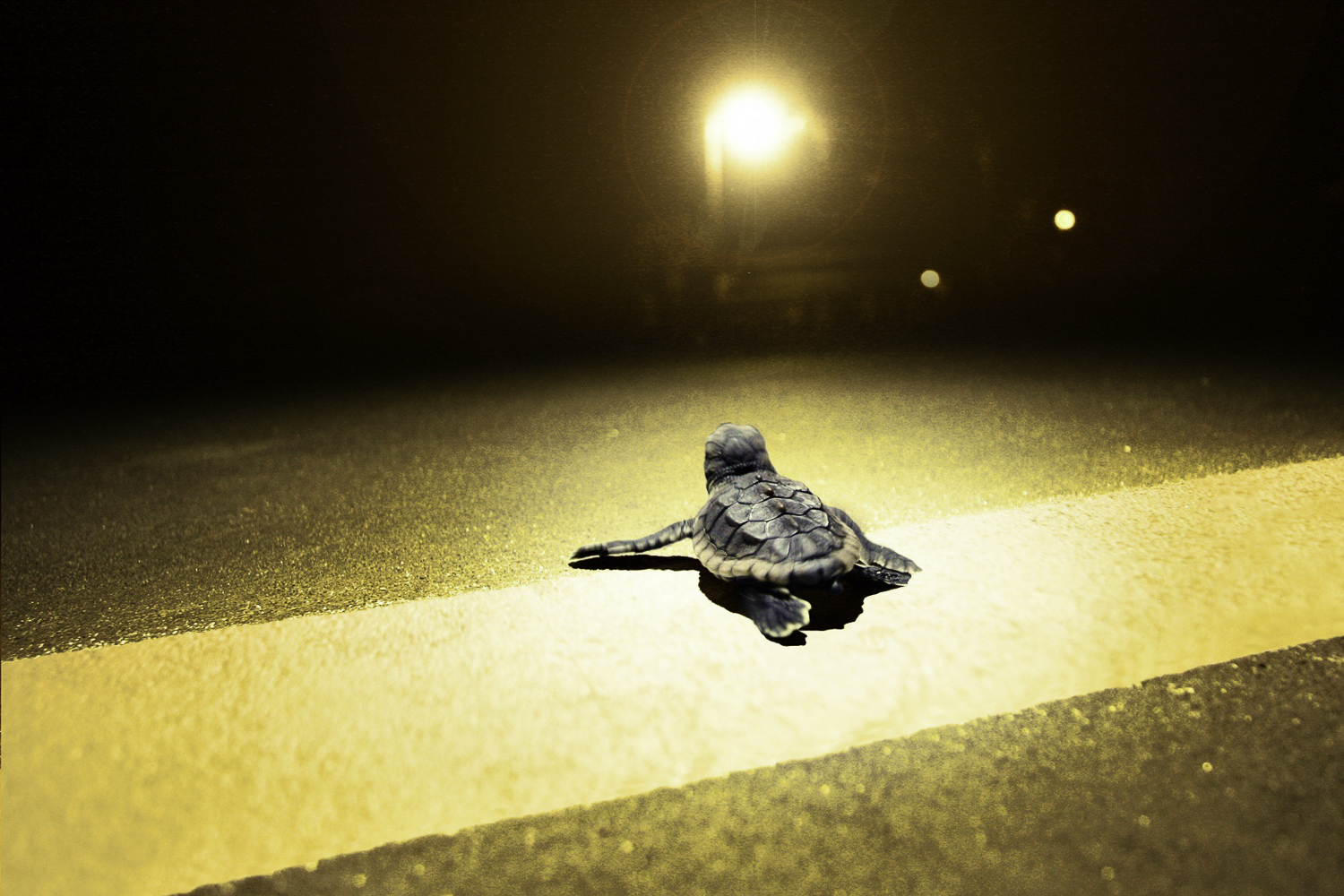 Artificial lights cause problems for hatchlings as they emerge from their nests and instinctively crawl toward the brightest direction, which would be towards the ocean on a naturally dark beach. Bright artificial lights attract and disorient hatchlings, causing them to crawl inland and away from the ocean or to wander aimlessly on the beach, all the while burning up vital stored energy that is crucial for survival if they do ever manage to reach the sea. Disoriented hatchlings often die from dehydration, exhaustion, terrestrial predation and as roadkill. If they do manage to eventually make it to the ocean, disoriented hatchlings have a lower chance of survival due to energy loss, which makes it harder for them to reach important off-shore habitats for feeding and increases their susceptibility to marine predators.