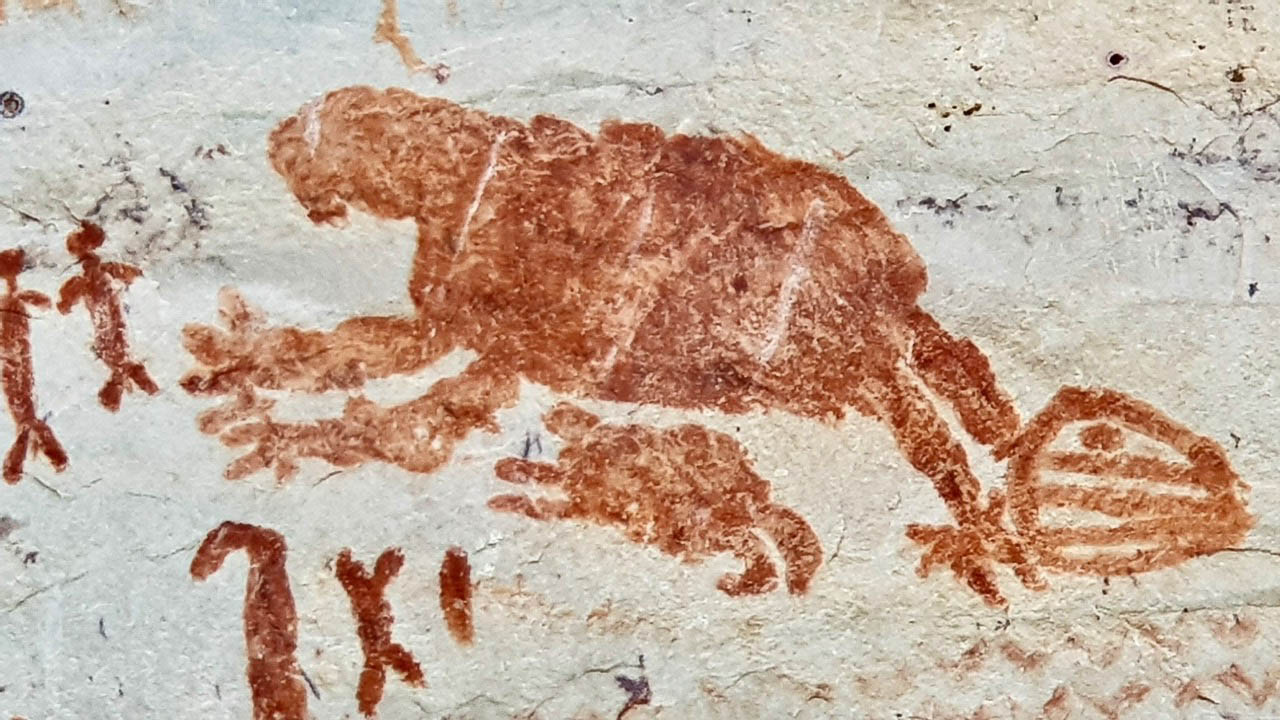 Dateline: December 3, 2020. A major discovery at the archeological site of Cerro Azul in the Serranía La Lindosa, Colombia, provides proof that the Amazon rainforest’s earliest inhabitants lived alongside now-extinct Ice Age mammals such as giant sloths and mastodons. The site is located in the Serrania de la Lindosa mountain range in the middle of the Colombian jungle, about 400 kilometers southeast of the capital, Bogota. 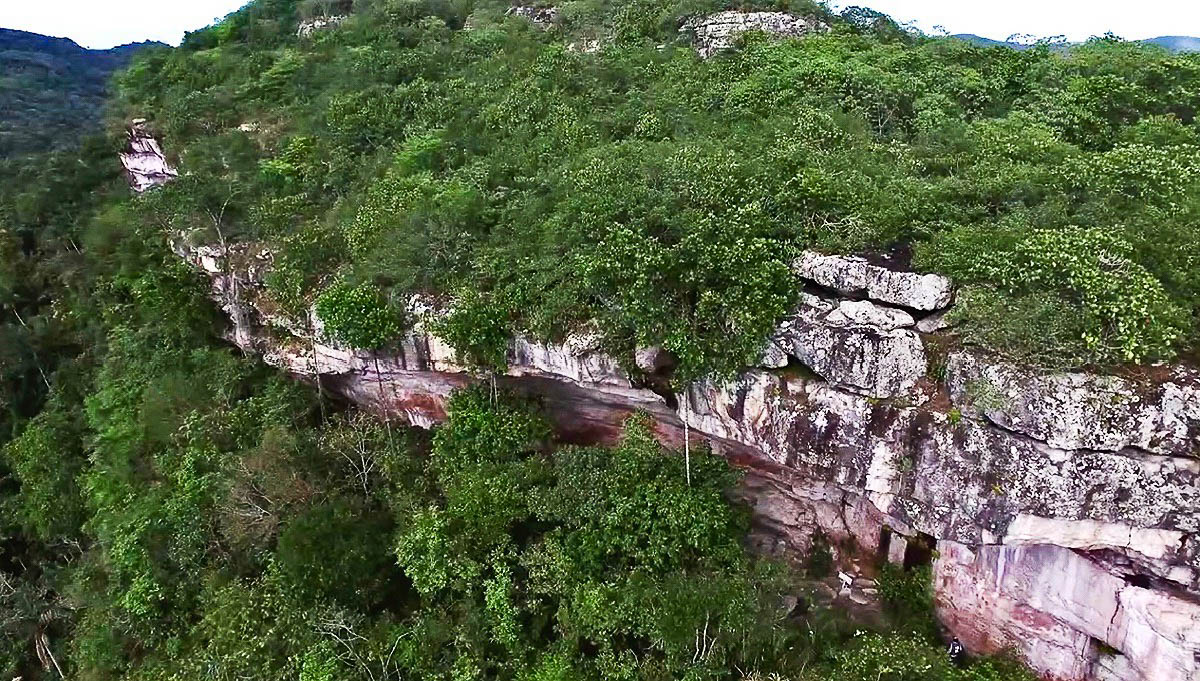 On satellite images, the area around the Serrania de la Lindosa simply looks green; to the north, the Rio Guaviare meanders through the dense Amazon rainforest. Guaviare, a department of south-central Colombia, includes the northwestern reaches of the Amazon rainforest. One of the most biodiverse regions in the world, this is also a contested landscape, the focus of competing interests, ranging from those of indigenous communities to those of wildlife conservationists. During the 1990s, while the FARC dominated the region, Colombian researchers, led by Carlos Castaño-Uribe and others, were nonetheless able to identify tens of thousands of remarkable rock art paintings and engravings in what is now Colombia’s largest national park, Chiribiquete, which was declared a World Heritage Site by UNESCO in 2018. The ceasefire between the government and the FARC in 2016 allowed for more intensive investigation of region, resulting in some of the earliest evidence of human occupation in the Amazon region. 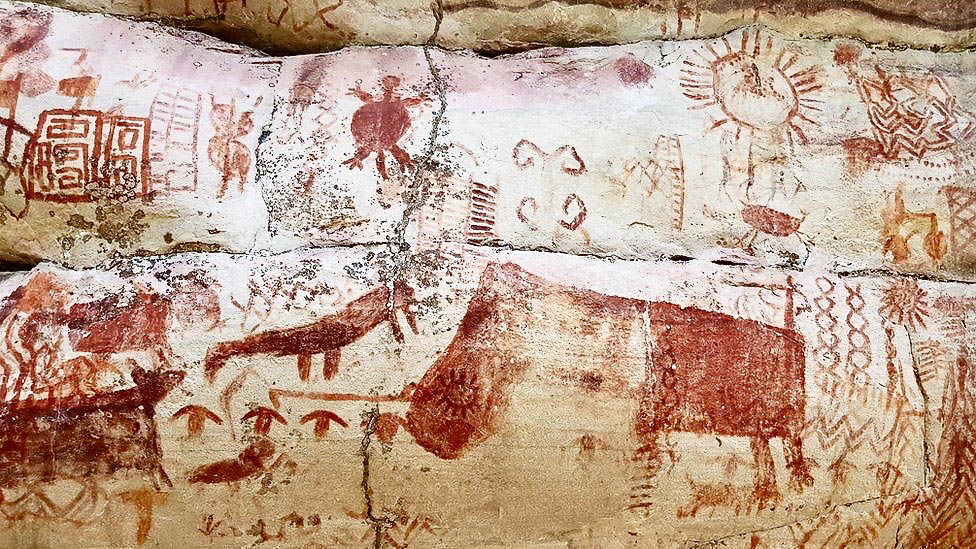 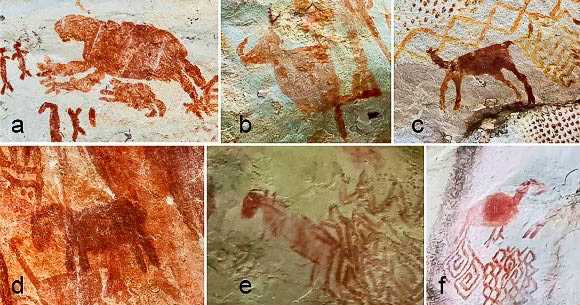 Announcing the discovery of thousands of prehistoric paintings of animals and humans in a remote area of Colombia marked an historic step for archeologists studying the peopling of the New World. At La Lindosa Guavire, in Colombia’s Chiribiquete National Park, extraordinary rock art panels are changing the minds of archeologists and paleontologists about the antiquity of human interactions with Ice Age megafauna. The paintings, which include depictions of what appear to be now-extinct animals, such as the mastodon, giant ground sloths and prehistoric horses, are estimated to have been made between 11,800 and 12,600 years ago—proof at last that the Amazon rainforest’s earliest inhabitants lived alongside now-extinct Ice Age animals.

In recent years, international research teams led by José Iriarte, professor of archeology at Exeter University and a leading expert on the Amazon and pre-Columbian history, Mark Robinson, Iriarte’s colleague at the University of Exeter, Gaspar Morcote-Ríos and Jeison Chaparro-Cárdenas of the National University of Colombia, and Francisco Javier Aceituno of the University of Antioquia, have expanded the scope of their efforts to include the entire gateway corridor leading to Chiribiquete.

Serranía La Lindosa’s rock art, newly brought to light by Morcote-Ríos and his colleagues, has now been documented along the entire 8-mile long corridor. The paintings are found in rock shelters and on the sharply sloping faces of tepuis: limestone table-top mountains that form a striking feature of the Amazonian landscape, a great pale gash in the green of the tropical forest. The paintings, created with a red mineral pigment, depict an astonishing array of fauna, along with humans – many of them armed, as if on a hunt. Many are located high on the rock walls, which would have required the use of ladders or perhaps another type of scaffolding; in the paintings themselves, wooden towers are depicted. 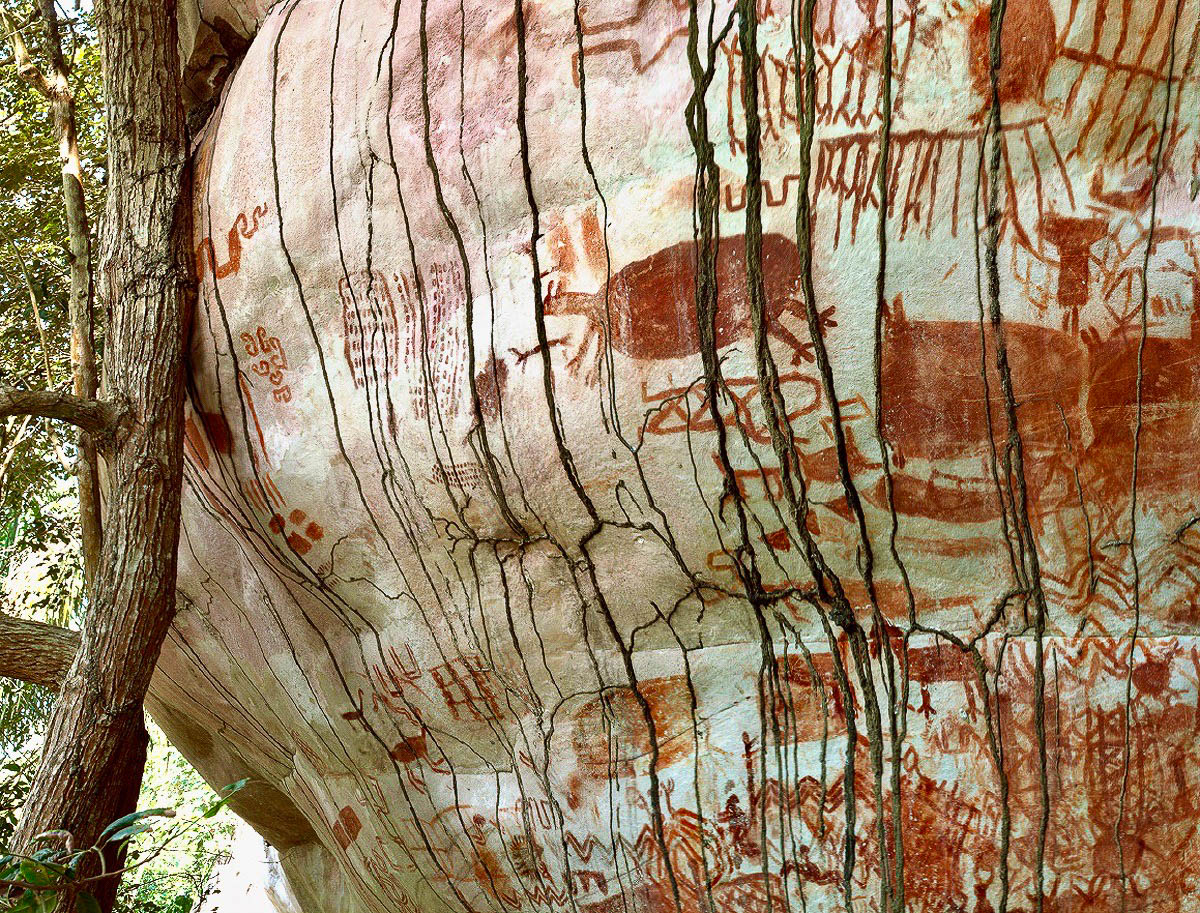 In the words of José Iriarte: “When you’re there, your emotions flow. We’re talking about several tens of thousands of paintings. It’s going to take generations to record them. Every turn you do, it’s a new wall of paintings. We started seeing animals that are now extinct. The pictures are so natural and so well made that we have few doubts that you’re looking at a horse, for example. The ice-age horse had a wild, heavy face. It’s so detailed, we can even see the horse hair. It’s fascinating.” 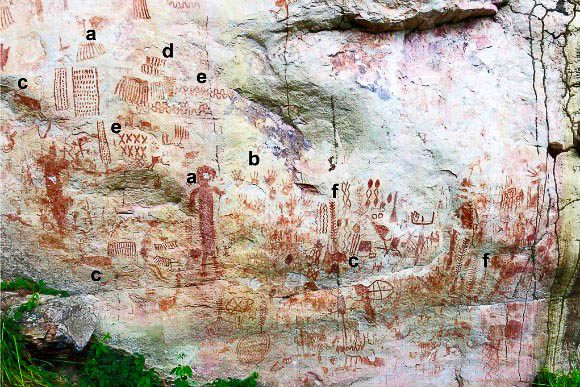 LAST JOURNEY project archeologists, a team led by Francisco Javier Aceituno of the Universidad de Antioquia, Gaspar Morcote-Rios of the Universidad Nacional de Colombia, and José Iriarte and Mark Robinson of Exeter University, have discovered spectacular pictographs in three separate rock shelters at Cerro Azul, Limoncillos and Cerro Montoya archaeological sites in the Serranía La Lindosa. The rock shelters are far from modern settlements and trails, but were known to some local communities, who helped the researchers explore them. “These rock paintings are spectacular evidence of how humans reconstructed the land, and how they hunted, farmed and fished,” said Professor Iriarte.

The vibrant red pictures were drawn using mineral pigments, especially ochre, which provides them with their characteristic terracotta color. They were produced over a period of hundreds, or possibly thousands, of years. The most abundant motifs recorded by the team are anthropomorphic, zoomorphic, and geometric and plant themes. Many of them depict hunting and ritual scenes, showing humans interacting with plants, forest and savannah animals. Among the most abundant zoomorphic figures are deer, tapirs, alligators, bats, monkeys, turtles, serpents, and porcupines, among many others. Importantly, the rock paintings also depict what appear to be extinct Ice Age megafauna.

The people who made these works of art were, it is believed, among the earliest humans to occupy the region, after migrations across what is now the Bering Strait some 25,000 years ago. The archeologists also discovered stone tools and animal and plant remains. No megafauna bones were found at the sites, so it is presumed that the people who painted the rocks were either not big-game hunters or dealt with the carcasses of large animals elsewhere. At the time the drawings were made temperatures were rising, starting the transformation of the area from a mosaic landscape of savanna, thorny scrub, and tropical montane forests into the broadleaf tropical Amazon forest we see today. “These really are incredible images, produced by the earliest people to live in western Amazonia,” said Dr. Mark Robinson, “They moved into the region at a time of extreme climate change, which was leading to changes in vegetation and the make-up of the forest. The Amazon was still transforming into the tropical forest we recognize today. The paintings give a vivid and exciting glimpse into these communities.”

The extinction of Pleistocene megafauna and the role played by humans have been subjects of constant debate in the Americas. Previous evidence from the Pampas region of Argentina suggested that this environment might have provided a refugium for the Holocene survival of several megafaunal species. Recent excavations and more advanced accelerator mass spectrometry radiocarbon dating at Campo Laborde site in the Argentinian Pampas suggest direct human impact on the Pleistocene fauna, with definitive evidence for hunting and butchering of Megatherium americanum (giant ground sloth) at 12,600 cal years BP. 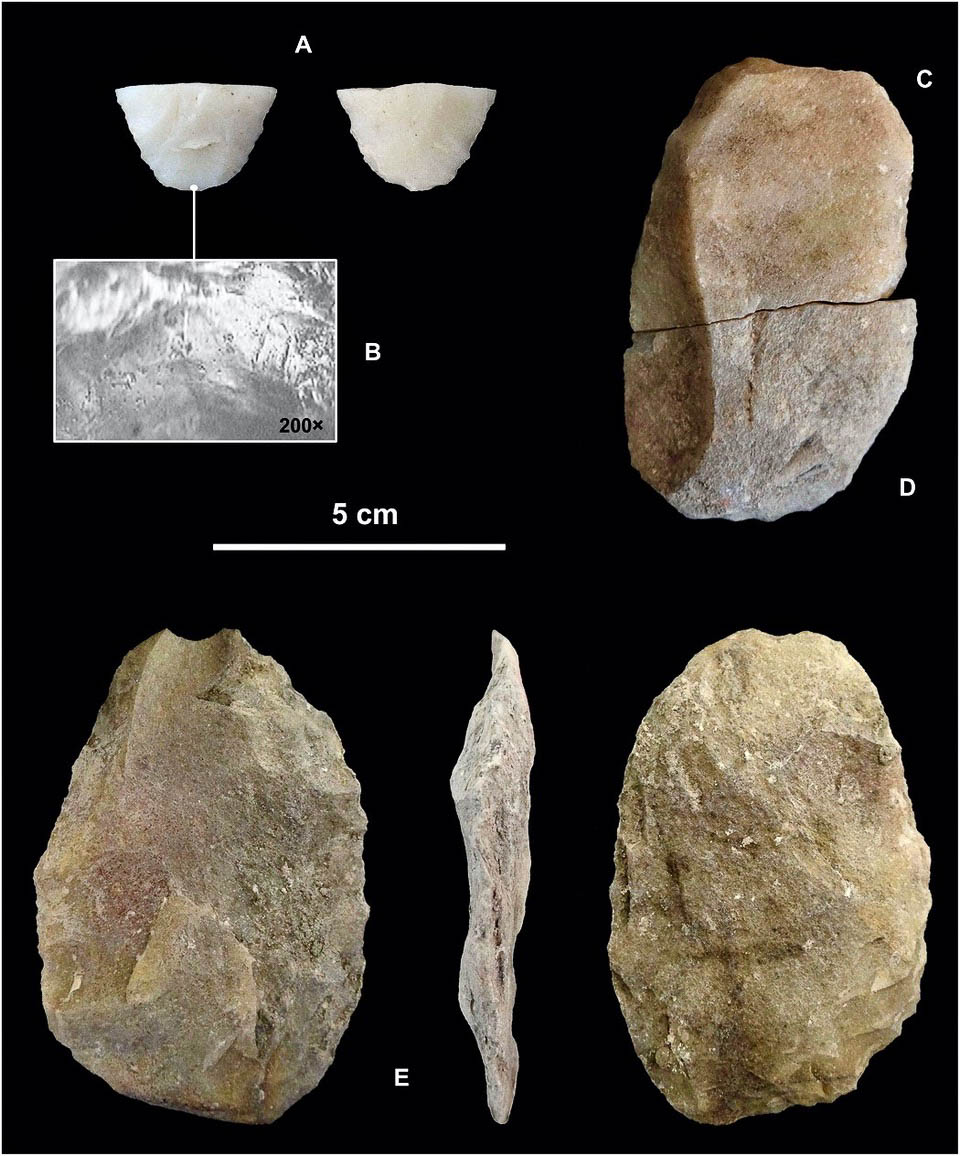 Leave a Reply to B. Sadie Bailey Cancel reply