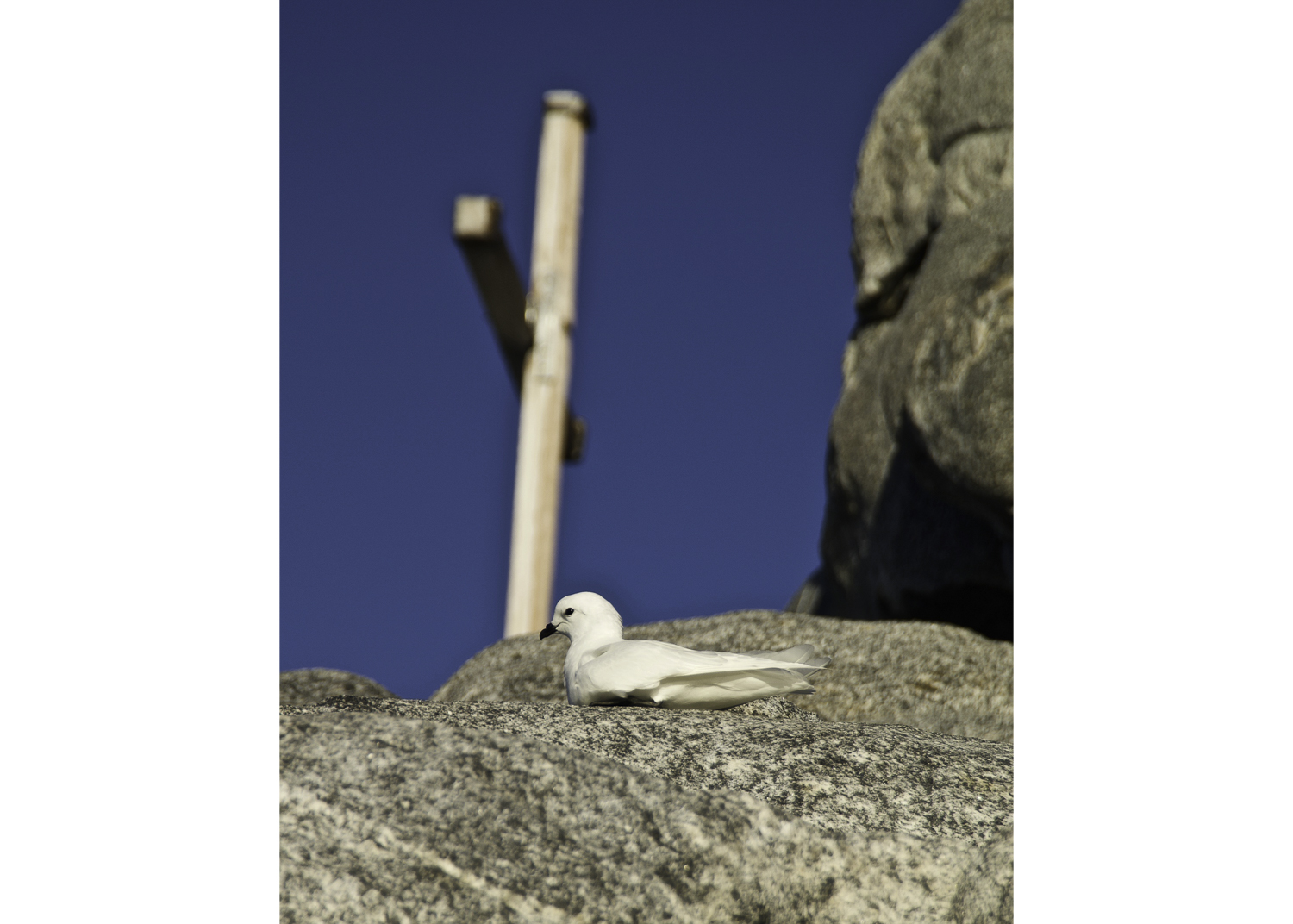 Seeing your first snow petrel on a trip to the Antarctic is always exciting, but for my group to see this one perched like a sentinel at the foot of the cross Mawson’s team erected at Cape Denison in memory Dr. Xavier Mertz and Lt. Belgrave Ninnis seemed a special gift. Dr. Dee Boersma, the renowned penguin expert, and Bay Roberts were the first to spot this snow petrel. The Adélie penguins had also established a small colony on the other side of the cross. Snow petrels are small, sparkling white seabirds, with coal-black eyes, a black bill (note the tube) and bluish-grey feet. There are two subspecies of snow petrel (the greater and the lesser), differing only in size. This one is the greater snow petrel, and the scientific name of the species is Pagodroma nivea, “nivea” being the Latin word for snow. These lovely small petrels are members of the tubenose group of seabirds, which includes the albatrosses, shearwaters, petrels and storm-petrels. The snow petrel, antarctic petrel and the south polar skua have the most southerly breeding sites of any bird, and they are also the only birds ever seen at the Geographic South Pole.

Snow petrels are almost entirely restricted to cold antarctic waters and are associated with pack ice, icebergs and ice floes. You often see flocks sitting on icebergs. At sea, snow petrels eat mainly fish, some cephalopods (squid), other molluscs, and euphausiids (krill). They also feed on seal placenta and the carcasses of dead seals, whales and penguins, and occasionally eat other carrion on land. Skuas are major predators, but severe weather conditions, especially heavy snow that blocks nest entrances, may cause adult snow petrels to abandon their eggs or chicks. Snow petrels tend to fly low over the water but very high over land to avoid predators such as the south polar skua.

Snow petrels nest in small to large colonies on cliffs, usually near the sea, but also inland on suitable rocky habitat. Some birds remain at the colony all year, but the main influx of birds to the colonies is from mid-September until early-November. They are largely pelagic except during the breeding season. Their nest is a simple pebble-lined scrape usually in a deep rock crevice with overhanging protection. One white egg is laid in late November to mid-December. The egg is incubated for 41–49 days and the chick is brooded for 8 days. The chick remains in the nest for an additional seven weeks, leaving the nest in late-February to mid-May. Egg mortality is approximately 50% while chick mortality is typically 10–15%. Snow petrel populations appear to be stable, but accurate counts are exceedingly difficult to obtain. 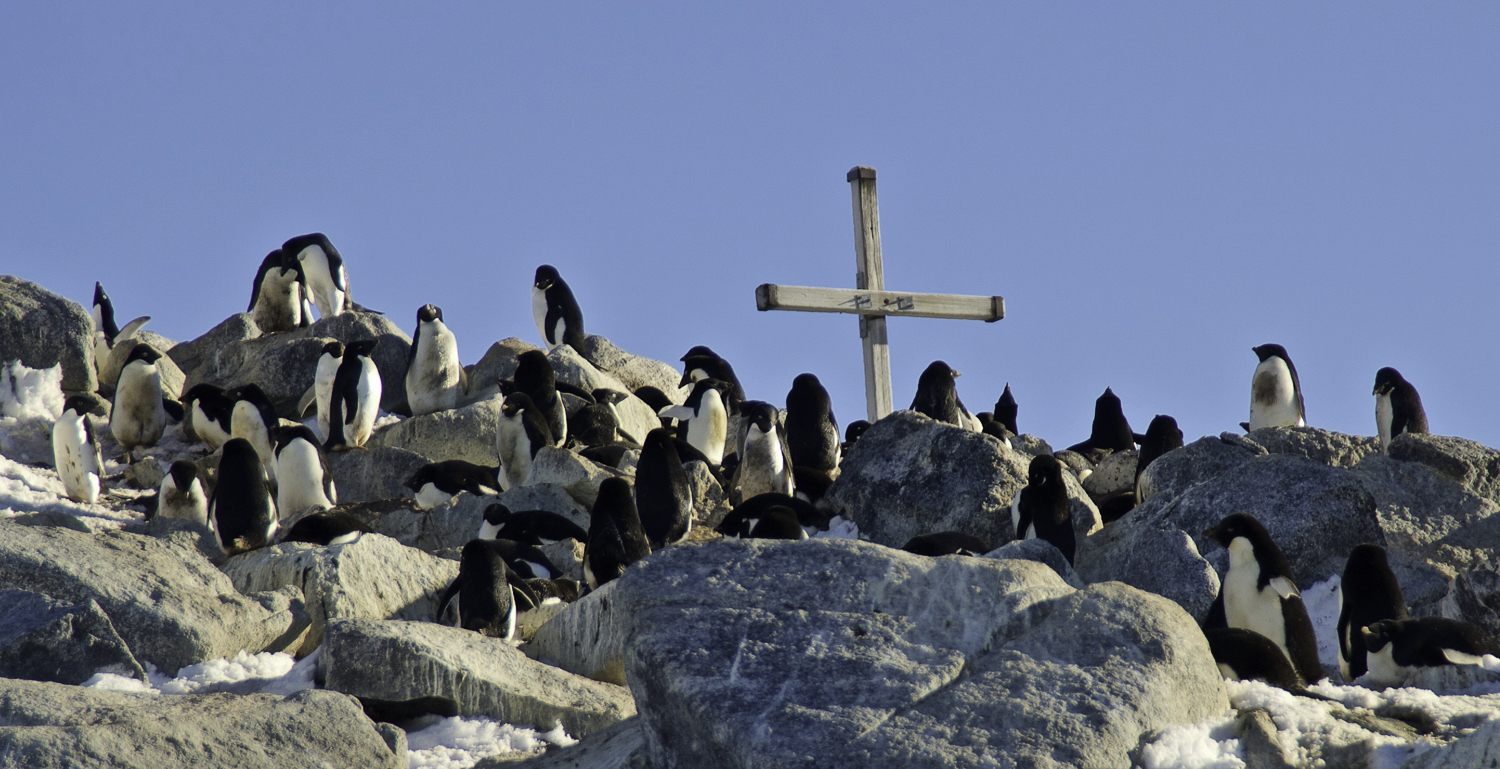 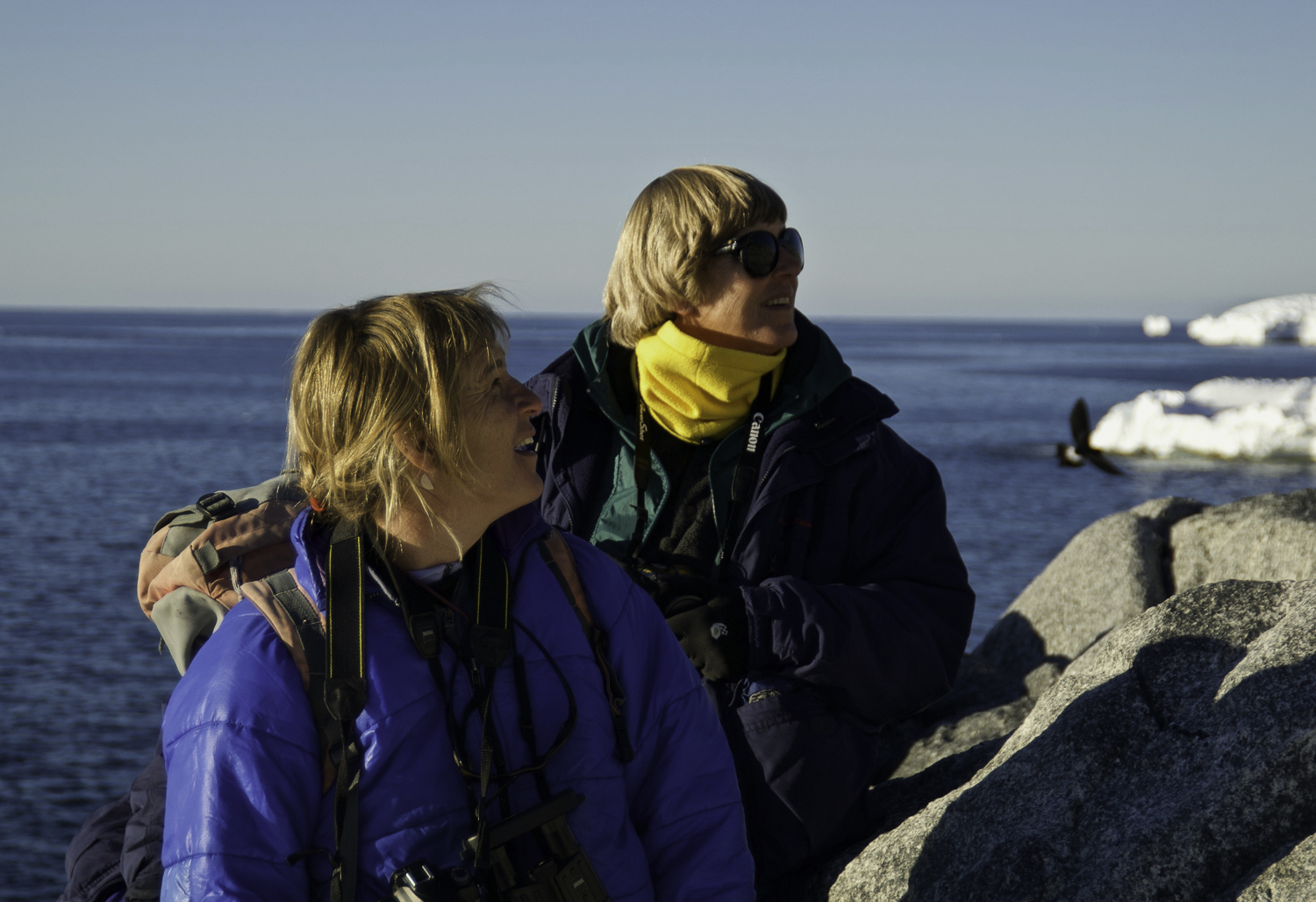 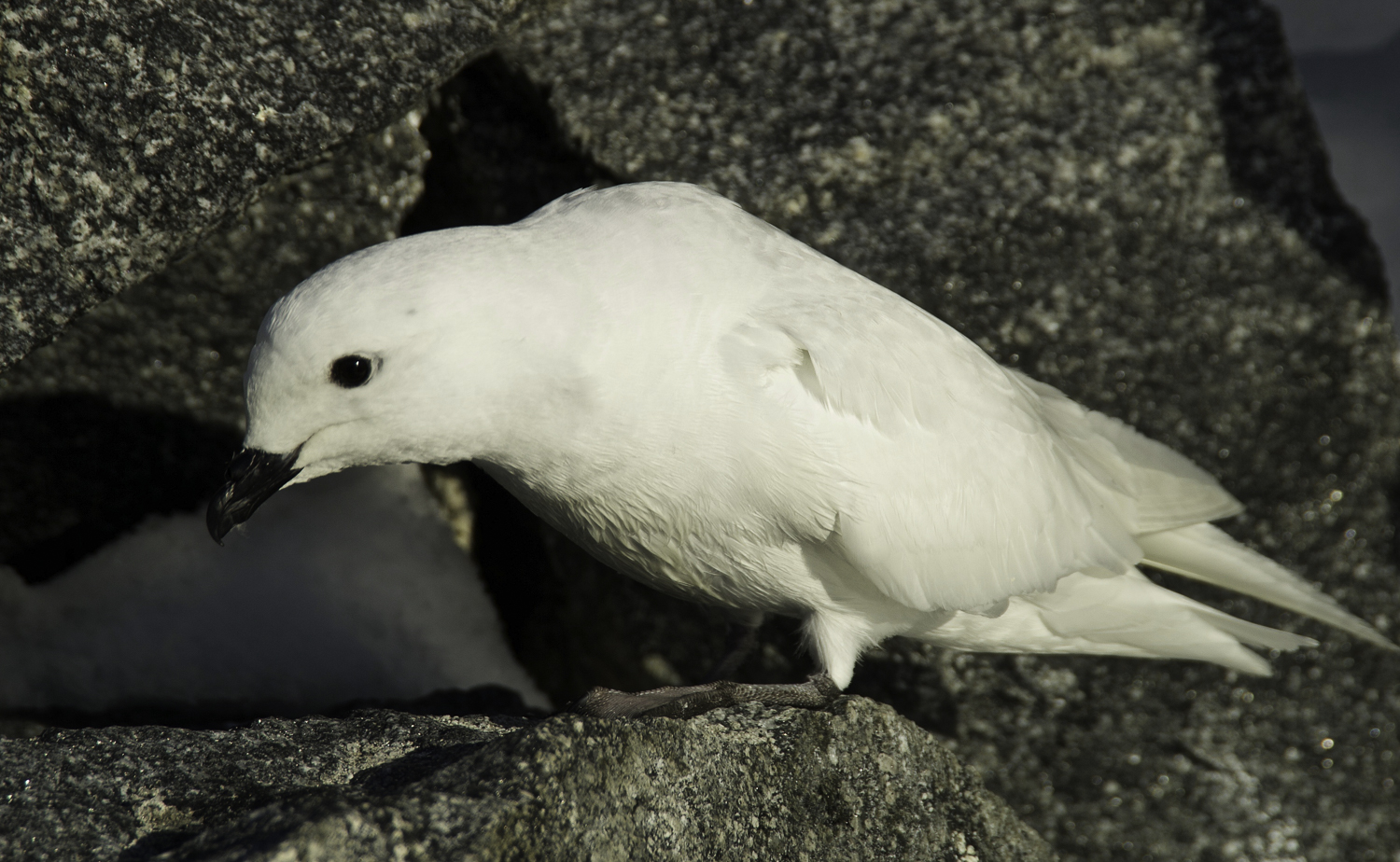 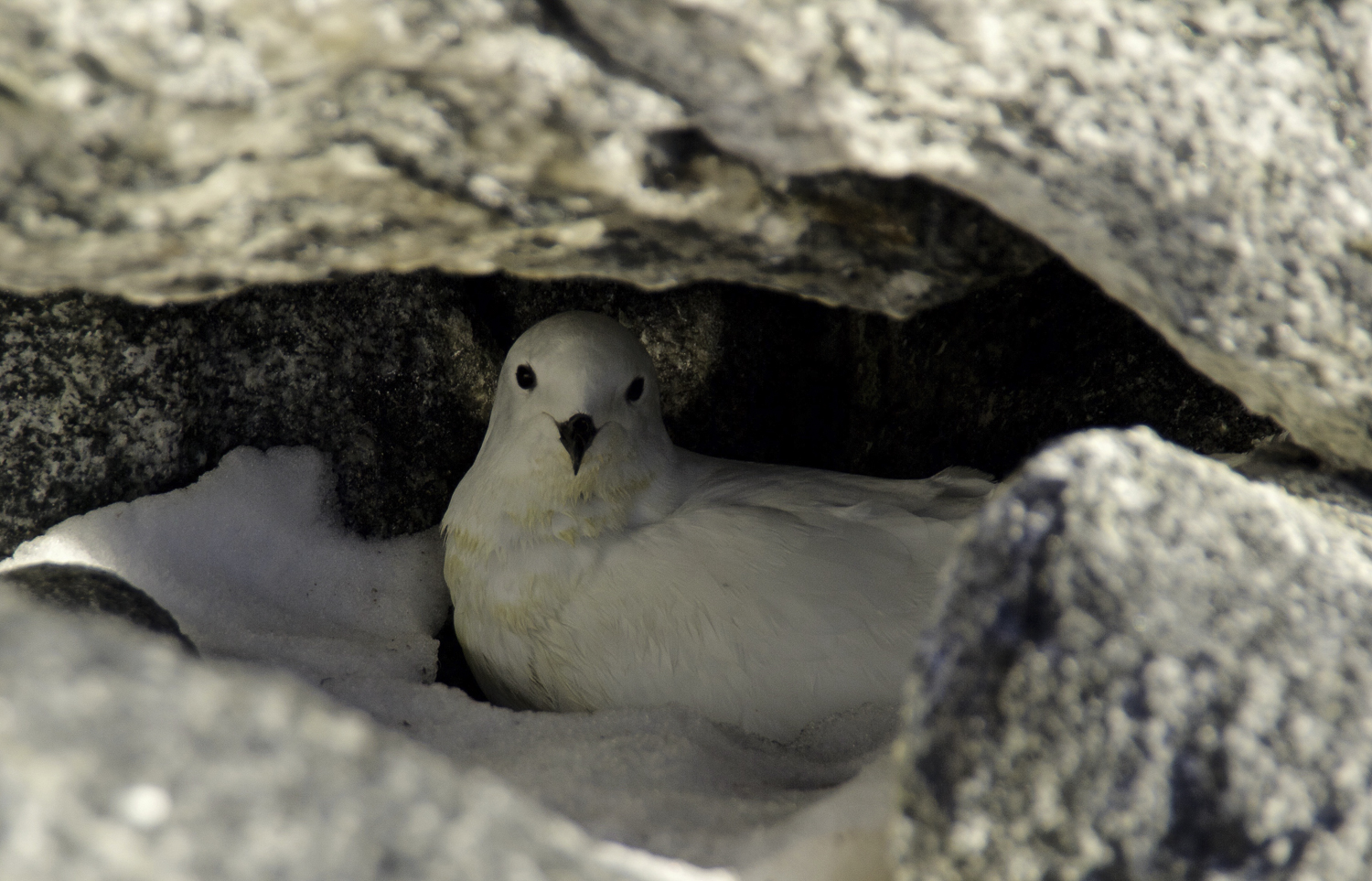