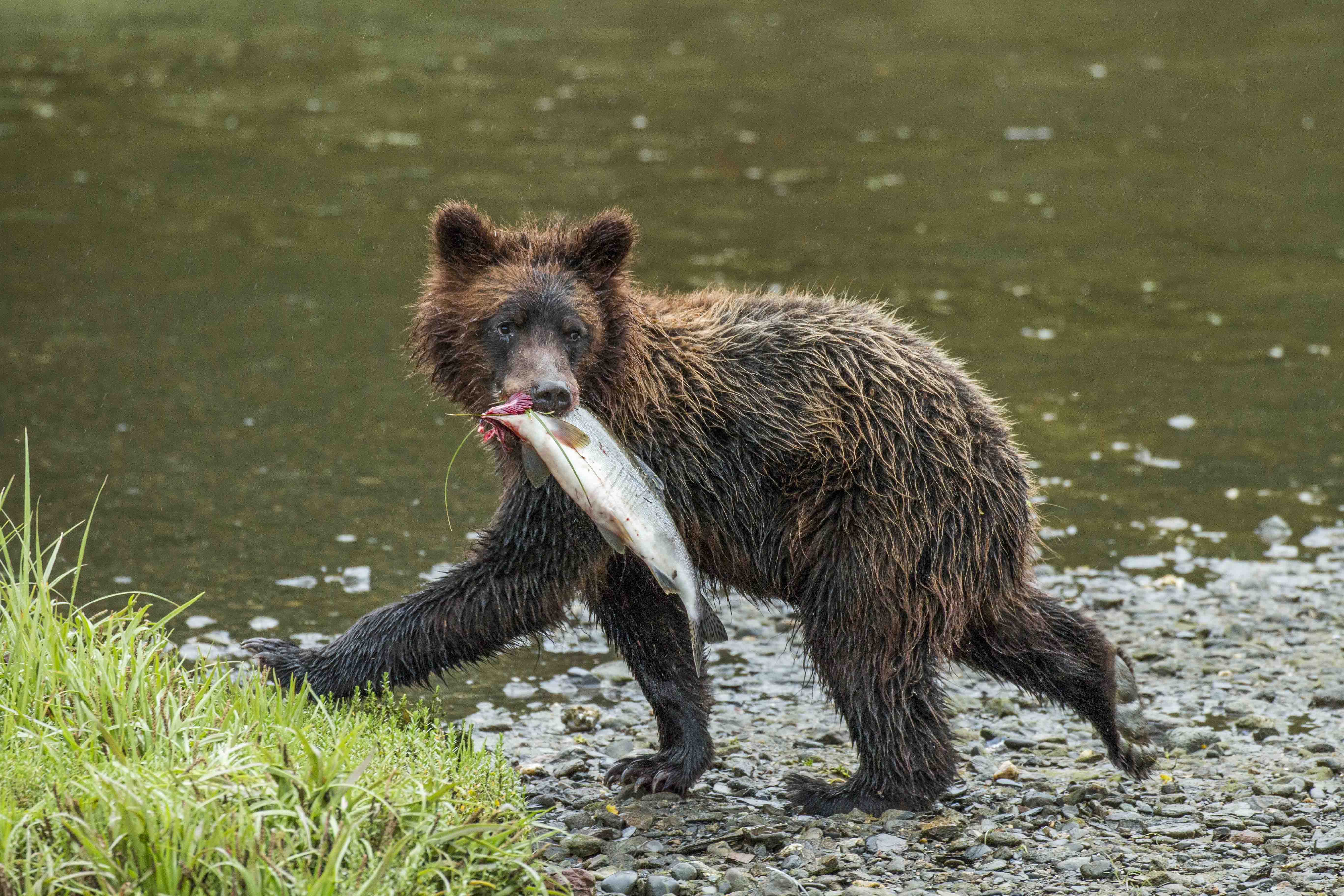 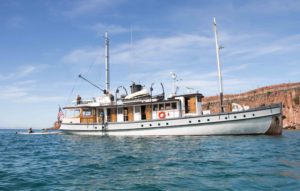 Few places in North America rival the scenic beauty and wildlife diversity of Southeast Alaska. Join us for an all-new voyage between Sitka and Juneau aboard the M/V Westward—our “classroom afloat.” We’ve been exploring these waters with Pacific Catalyst since 1996 and we know you’ll agree that there is no finer way to experience Southeast Alaska. Unlike big cruise ships, Westward is trim enough to explore the narrowest of fjords, slipping quietly past electric blue icebergs, and to wander amidst the rocky islands on the outer coast. The use of sea kayaks allows us a special seal’s-eye view of the marine world. Beginning sea kayakers will find this an ideal setting in which to learn.

We begin our adventure in Sitka, which sits in the shadow of Mount Edgecumbe, a volcano named by Captain Cook in 1778. Sitka would eventually become the political and cultural hub of Russian adventurism in Alaska and the North Pacific during the 19th century. First settled by pre-Tlingit people about 10,000 years ago, Sitka offers a unique window into Tlingit history and their struggle to preserve cultural identity in the face of a burgeoning European and American presence. Visits to the Totem Trail National Historical Park and the Sheldon Jackson Museum reveal the powerful cultural and artistic influences that shaped the indigenous lifeway. 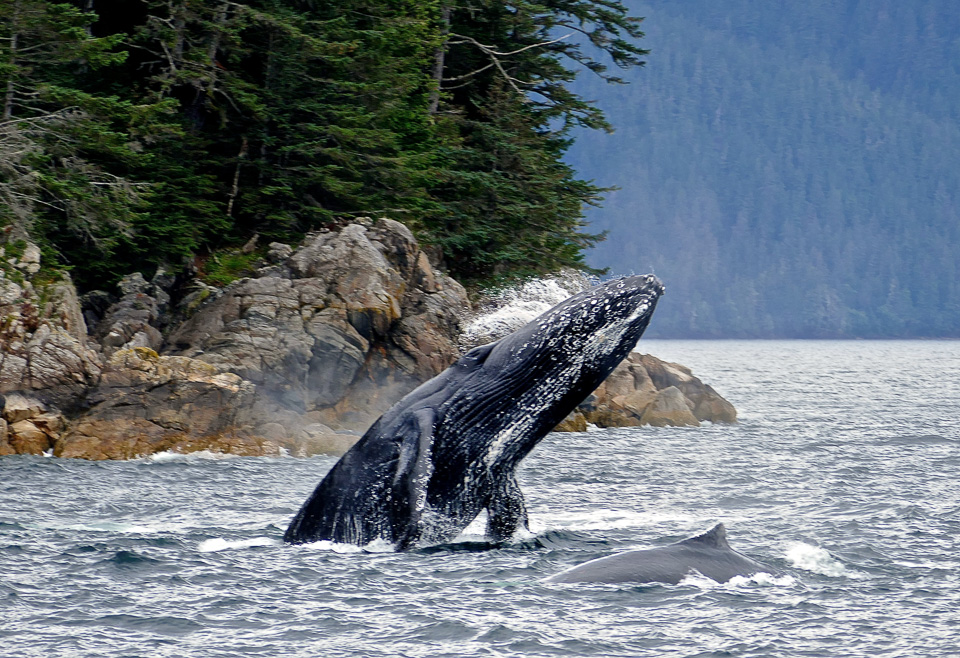 The siren call of the wild Pacific edge beckons and we board Westward, casting off for Krestof Sound. This will be the first of several anchorages as we island-hop our way northeast to Sergius Narrows and into Peril Strait. In Peril Strait, anchoring in Hanus Bay, we’ll hike to Lake Eva and then enjoy a paddle in our quiet cove. The 4 junction of Peril Strait and Chatham Strait is especially rich in forage fish, attracting a diversity of marine mammals and seabirds. If we are lucky, we may see the spectacular bouts of synchronized lunge-feeding behavior that occurs when groups of humpbacks work cooperatively to entrap schools of small fish or krill by creating a near- surface “bubble net.” With this bubble net in place, the humpbacks lunge upwards with their baleen-rimmed mouths agape, engulfing hundreds of small prey fish in one fluid motion.

Our Southeast Alaska voyages offer myriad photographic and natural history opportunities. Although wildlife sightings are unpredictable, we should see both brown and black bears visiting their traditional salmon spawning streams, raucous groups of Steller sea lions at their haul-outs, harbor seals and their pups, bald eagles, and fascinating seabirds, such as the marbled murrelet, pigeon guillemot, and tufted puffin. 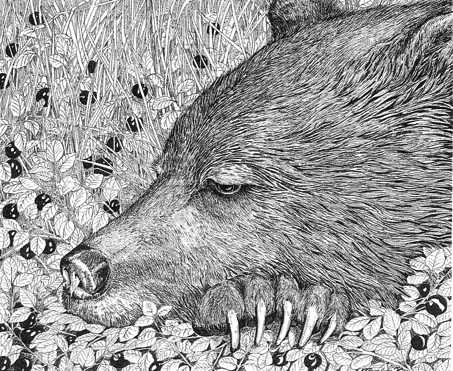 Bear watching is always a highlight of any trip and we’ll anchor in an estuary system that supports a large population of brown bears, spending several hours ashore following paths created by generations of bears. We’ll learn to identify their day beds, scratching trees, lookouts, and then hike to a fish ladder that allows returning salmon access to their natal streams and where we’ll hope to see large numbers of feasting bears.

Are there really salmon in the trees? The answer is a coevolutionary story—and bears and many other salmon-loving species play a crucial role in the rich cycle of life that links the forest with the sea. To see thousands of spawning salmon, tail to tail in the swaying current and making their final journey is a soul-stirring experience. We’ll “talk salmon,” and learn why the Alaska wild salmon fishery has earned a reputation as one of the most carefully managed and environmentally conscientious fisheries in the world. We’ll also discuss how changes in prevailing ocean currents and water temperatures are affecting the forage fish population that marine mammals and seabirds depend on for food. 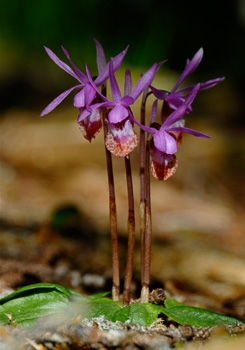 Several cultural opportunities on this voyage offer glimpses of how people have adapted to the challenges of life in a coastal wilderness. Crossing Chatham Strait to Admiralty Island, we’ll visit the Tlingit village of Angoon. There a Tlingit elder will welcome us and introduce us to local carvers who’ll show us their current projects. The traditional Tlingit stories our host shares provides a window into the many ways that their lives are shaped by forest and sea. Listening to the Tlingit language you can hear the music of water and ice—and the ever-present spirit voice of Raven.

Rounding the southern tip of Admiralty Island, we head towards our rendezvous with the Dawes Glacier, a magnificent tidewater glacier. Crossing the terminal moraine that guards the entrance to Endicott Arm, we are quickly immersed in the magical world of a glacial fjord. At Ford’s Terror, the glacially-etched bedrock walls of the fjord resemble a flooded Yosemite. Kayaking here introduces us to a world of indescribable beauty. Arriving at the towering face of the Dawes Glacier compels us to address global warming realities. Continuing south along Frederick Sound, we explore the Brothers Islands and spend our final evening in the dramatic embrace of Scenery Cove. Creating a photo book will capture the essence of Southeast Alaska—as well as the challenges looming on the horizon.

Price includes: 1 night’s lodging in Sitka (8/2) and 1 night’s lodging in Petersburg (8/10), 8 days / 7 nights aboard Westward, all meals and beverages (wine/beer included) aboard and onshore, the services of our 3 naturalist leaders, gratuities to Westward’s crew, full sea kayak outfitting and instruction, boat/hotel transfers, and copy of the trip’s photo book. The price quoted is per person based on double occupancy; single accommodations unavailable.

Not included: Roundtrip airfare from your point of departure to Sitka on 8/2 or return from Petersburg on 8/11/18.

We begin our adventure in Sitka

Rounding the southern tip of Admiralty Island, we head towards our rendezvous with the Dawes Glacier, a magnificent tidewater glacier.

Continuing south along Frederick Sound, we explore the Brothers Islands and spend our final evening in the dramatic embrace of Scenery Cove.