Voyages to the Sea of Cortez & Baja California

Voyages to the Sea of Cortez & Baja California 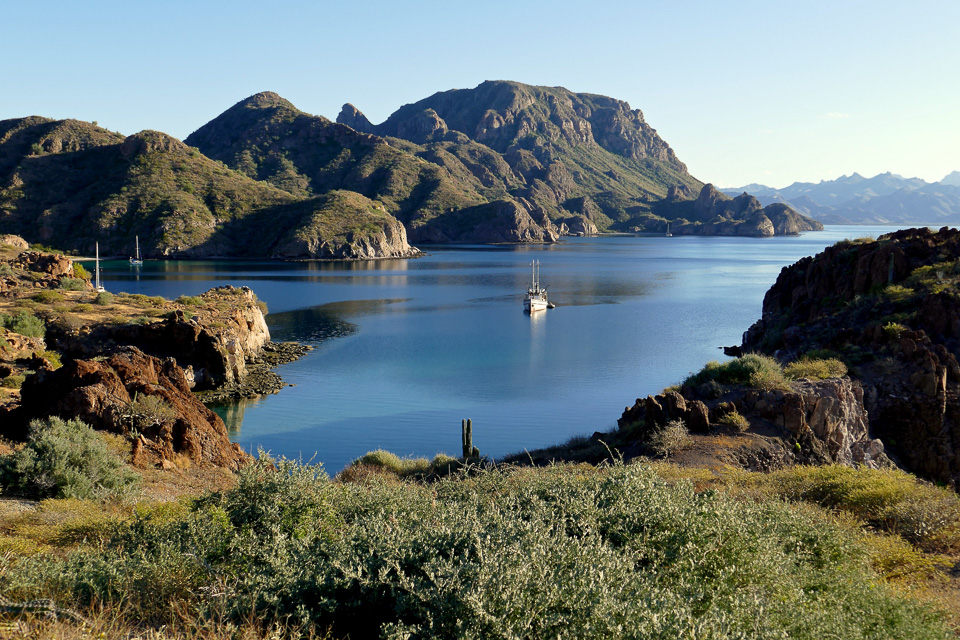 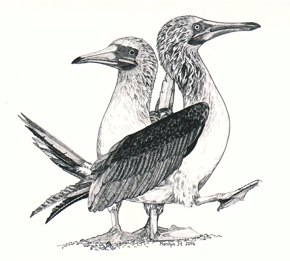 IN THE SPIRIT OF ED RICKETTS AND JOHN STEINBECK: VOYAGES TO THE SEA OF CORTEZ & BAJA CALIFORNIA

Standing on Westward’s foredeck, we see an arc of cloudless sky and a jagged spine of cactus-clad mountains towering above turquoise-hued water. Rising mirage-like out of the Pacific Ocean, Mexico’s Baja California Peninsula stretches south as a slender 800-mile-long cul-de-sac of the Sonoran Desert. Along its austere eastern shoreline, the Sea of Cortez (Gulf of California) separates the Baja peninsula from the rest of mainland Mexico. From Baja’s western coast, the Pacific Ocean stretches across one-third of the globe’s circumference before reaching the shores of another continent. 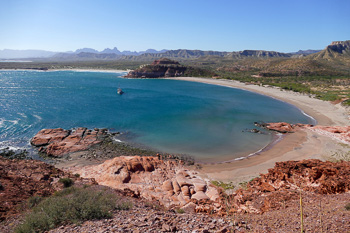 The sense that Baja California seems a world apart reflects its remarkable plate tectonic history and its biological setting. Baja California sits atop the oceanic Pacific Plate while mainland Mexico is situated on the continental North American Plate. Deep-seated plate movements along the southern trajectory of the great San Andreas Fault caused the peninsula to begin rifting northwest in relation to mainland Mexico about 25 million years ago. By 5 million years ago, the Pacific Ocean had flowed into the gulf-like breach between the plates, ultimately creating the Sea of Cortez. Episodes of intense volcanism along the peninsula’s mountainous spine and the resulting uplift of its eastern flanks produced the spectacular scenery we see today and triggered the region’s climatic transformation.

Tethered to the North American mainland by a narrow land bridge and surrounded by Pacific waters on three sides, Baja California is a treasure trove of biodiversity. With the evolutionary stage set by a million years of virtual isolation, the Sea of Cortez’s 44 major islands and 900 smaller islands host the largest number of endemic plant and animal species in North America. Of the 695 species of island-dwelling vascular plants, 20 genera are endemic. These islands are also among the world’s richest in terms of reptile diversity, with at least 50 endemic species. 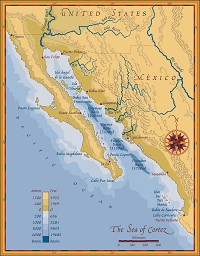 The late Jacques Cousteau, ocean explorer and renowned conservationist, described the Sea of Cortez as “the aquarium of the world.” Of the 891 species of fish that occur in these waters, 90 are endemics. The region also contains 39% of the world’s total number of marine mammal species and one-third of the world’s cetacean species. In fact, many biologists refer to the Sea of Cortez and its islands as the “Mexican Galapagos.”

In 2005, with tourism pressures, overfishing, and other environmental threats taking a drastic toll, UNESCO and the Mexican government protected much of the Sea of Cortez and nearly 50% of Baja California Sur as a World Heritage Site.

Our southbound expeditions to Baja California begin in Loreto, a picturesque town located on Baja’s eastern shore, and end in the city of La Paz. Traveling by van across the Baja peninsula’s jagged spine to Magdalena Bay, we’ll visit one of the sheltered lagoons on Baja’s west coast where migratory gray whales gather in large numbers each winter to give birth and breed. Our base is a delightful small hotel 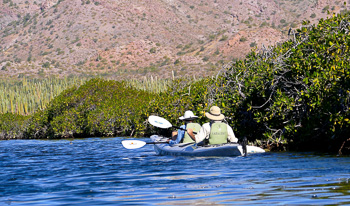 located on a beautiful and bird-rich estuary. Whale watching guides take us into the lagoon in their small boats (pangas) in the afternoon and again the next morning, affording us two magical opportunities to drift quietly in the midst of gray whale mothers and their calves. The whales seem to be as curious about us as we are of them. Some whale mothers may even bring their calves right up to the boats. With memories of gray whales tucked away in our hearts and minds, we return to the Westward and begin our voyage in the Sea of Cortez.

Why voyage “In the Spirit of Ed Ricketts and John Steinbeck?” Legendary marine biologist Ed Ricketts is known for his pioneering studies of marine ecology along the Pacific coastline of North America. His famous book Between Pacific Tides, first published in 1939, remains the classic reference for the Pacific intertidal zone. In the spring of 1940, Ed Ricketts and his ocean-loving friend, novelist John Steinbeck, embarked on a 4,000-mile expedition aboard the Western Flyer, a sturdy 76-foot purse seiner. Their voyage would take them from California’s Monterey Bay south around Baja California and into the Sea of Cortez.

Ricketts and Steinbeck shared a profound passion for understanding the marine world. They believed that their 6-week collecting trip in the Sea of Cortez would open a window on this little known region as wide and horizonless as Charles Darwin’s explorations had aboard the Beagle. Their expedition resulted in two books—Sea of Cortez: A Leisurely Journal of Travel and Re- search (1941), which included Ricketts’ collection catalog, and The Log from the Sea of Cortez (1951), Steinbeck’s shorter version published following Ricketts’ tragic death in 1948. John Steinbeck described their expedition as “bright with sun and wet with sea water.” We follow happily in their wake.

Westward’s naturalist, sea kayak and snorkeling guide, Carlos Gajon, is a La Paz native and leads our naturalist team in exploring this desert and marine wilderness. Once aboard Westward, we’ll be watching for red-billed tropicbirds and elegant terns swooping over the water and brown pelicans fishing the turquoise shallows. Trips ashore introduce us to the Sonoran desert biome and the plants and animals adapted for life here. You’ll see giant cardón cacti towering over a prickly understory of shrubs and desert-adapted wildflowers. Desert birds include white-winged doves, pyrrhuloxias, Gila woodpeckers, and the endemic Xantu’s hummingbird. We’ll use sea kayaks to explore the labyrinth of mangroves in San Jose’s expansive lagoon, ever-watchful for yellow-crowned night herons, white ibis, and mangrove warblers. At sea, we’ll hope to see foraging pairs of Craveri’s murrelet, the tiniest of murrelets, both blue-footed and brown boobies, Heermann’s gulls, and magnificent frigatebirds. 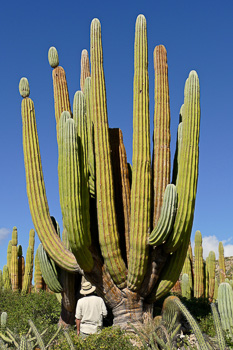 Island hopping, we’ll drift quietly through the nutrient-rich waters of the “blue triangle,” where we hope to spot both blue and sperm whales as they congregate to feed on the bounty of plankton and squid. We’ll learn how the infamous El Niño and La Niña cycles in the Pacific influence the abundance of marine life and drive the storm systems that deliver nurturing moisture to the Baja peninsula and the islands of the Sea of Cortez. The aerial displays of mobula rays never fail to amaze and, if we are lucky, long-beaked common dolphins may converge at our bow wave.

At Los Islotes we’ll observe the raucous action at a haulout of California sea lions. Anchoring off Isla Partida and Caleta Cardonal, we’ll wander the island’s mangrove-fringed shore and enjoy a cross-island hike. At Isla Espiritu Santo, we’ll kayak the crystalline waters and spend time photographing a spectacular colony of magnificent frigatebirds—a treat for all the senses. But wherever our final anchorage finds us, we’ll celebrate and savor the highlights of our trip over another fabulous dinner, raising our glasses to yet another Baja sunset and shared adventures in a desert paradise.

Includes: 4 nights’ hotel accommodations (including 2/22 at the Westin Airport Hotel near LAX), and the Alaska Airlines flight from LAX to Loreto on 2/23. Also included is van transport on the peninsula, all meals ashore, a week’s nights and all meals aboard Westward, all wine and beer, 3 Cloud Ridge naturalist leaders, Westward’s 4- person crew, complete sea kayak outfitting and instruction, gratuities throughout, and a copy of the photo book of our voyage.The price quoted is per person based on double occupancy. Single accommodations are unavailable for this trip. Does not include roundtrip airfare to Baja from your home airport (except where air segments are noted in the trip description) or travel insurance.

Our southbound expeditions to Baja California begin in Loreto, a picturesque town located on Baja’s eastern shore, and end in the city of La Paz.