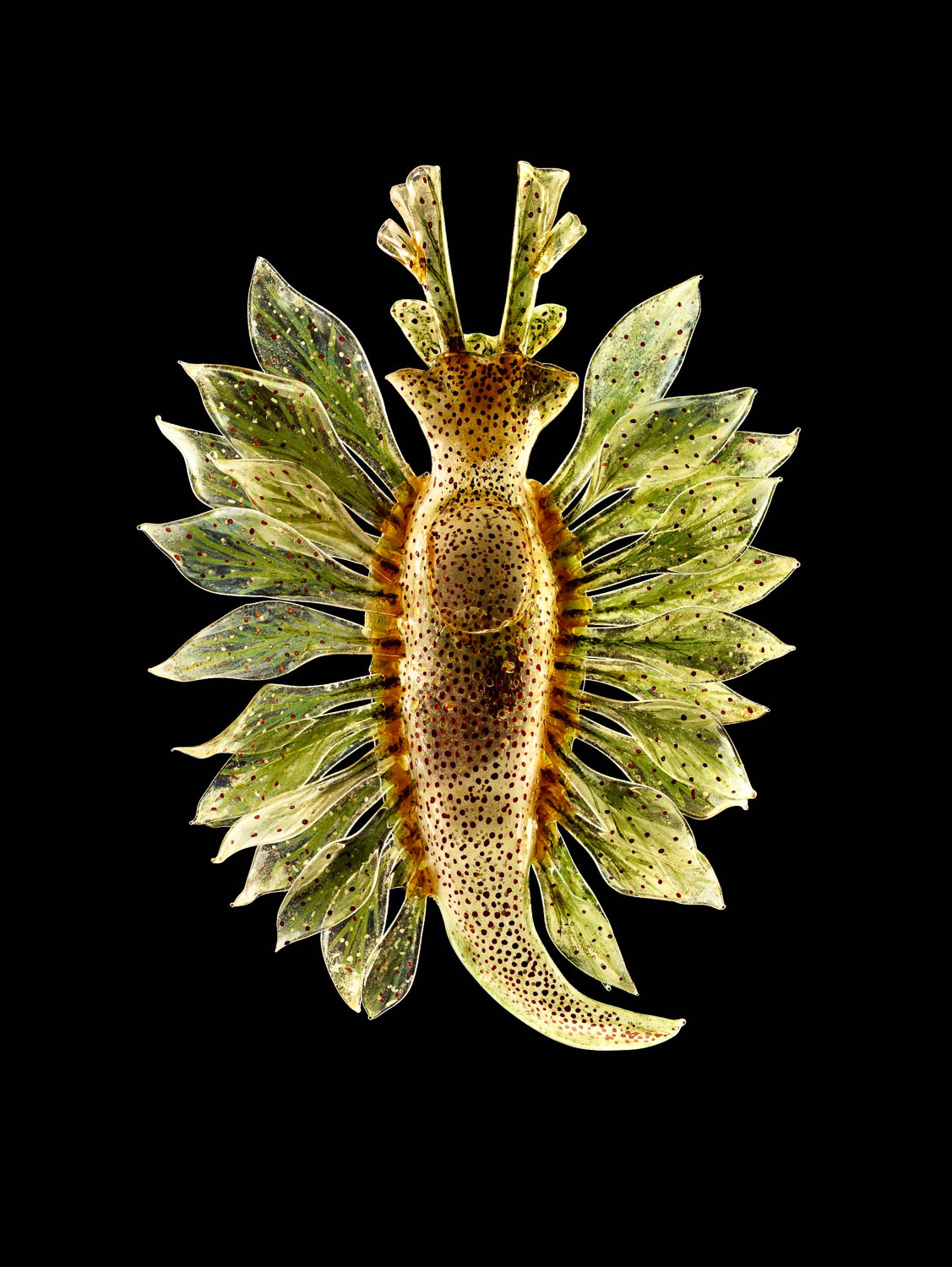 Photo Credit: Courtesy of photographer Guido Mocafico and the Natural History Museum of Ireland. This Blaschka masterpiece in glass is of a type of sea slug called the spotted sacoglossan (Caliphylla mediterranea),

I subscribe to the stewardship vision best expressed by the great Senegalese environmentalist Baba Dioum—we are moved to conserve what we understand and love. Every so often, in researching the topics for our ePostcard series, I discover a book that deserves special mention for the sheer pleasure of reading good writing interwoven with excellent science. I’ll be interspersing A Naturalist’s Bookshelf whenever thematically appropriate in our ongoing ePostcard series. My intent is not to write a book review per se, but simply to introduce books that I think you will enjoy. I hope that A Naturalist’s Bookshelf becomes a new tradition for you—one that inspires you to learn more about a subject that you found interesting in our ePostcards. 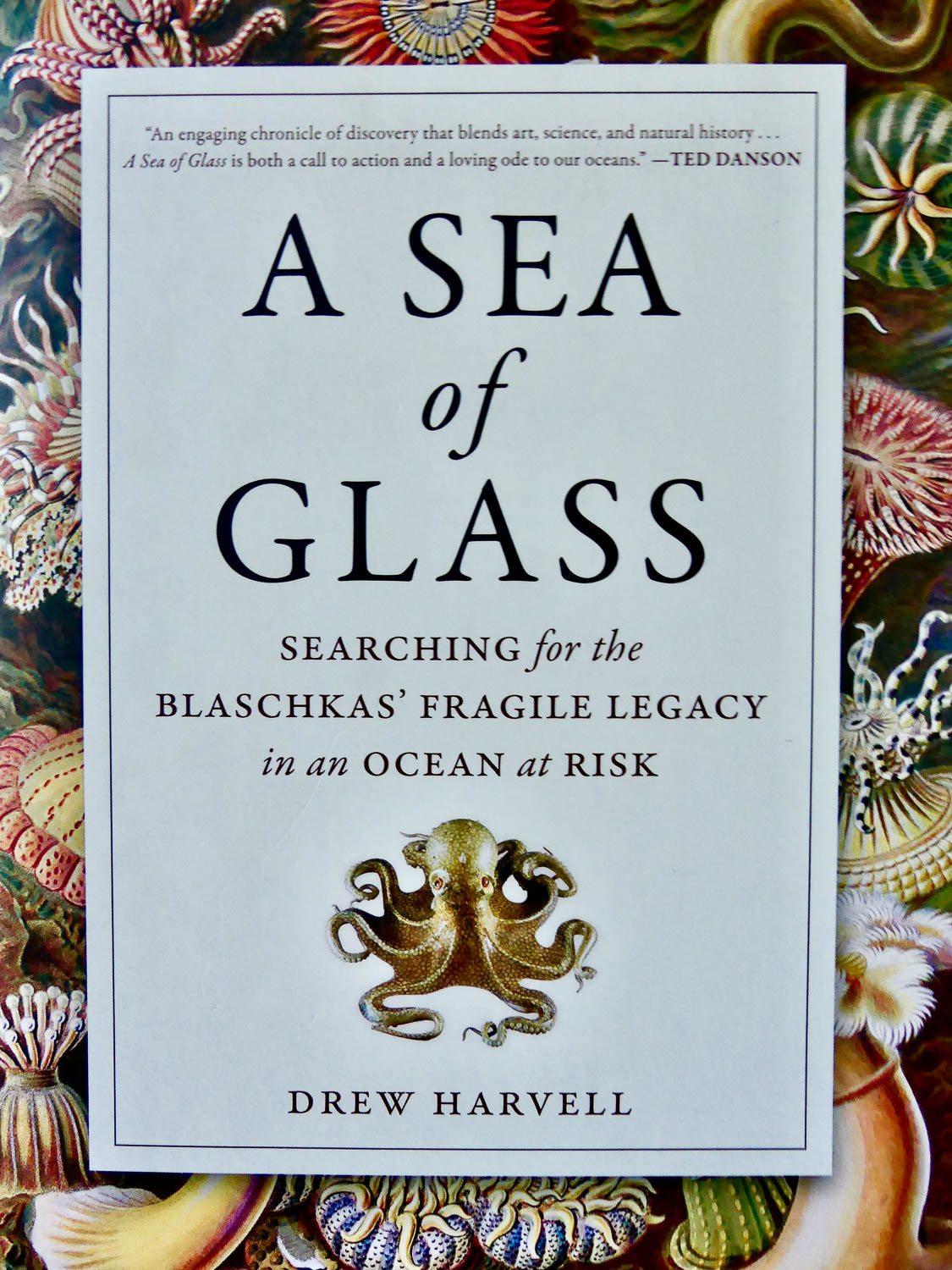 A Sea of Glass: Searching for the Blaschkas’ Fragile Legacy in an Ocean at Risk
By Drew Harvell (2016)
University of California Press (illustrated; 232 pp.)

The stunning legacy of father and son glassblowers, Leopold and Rudolf Blaschka, is vividly portrayed in Drew Harvell’s A Sea of Glass: Searching for the Blaschkas’ Fragile Legacy in an Ocean at Risk. The author, a professor of ecology and evolutionary biology at Ithaca, New York’s Cornell University, is also the curator of the Blaschka Collection at the Corning Museum of Glass. Although the Blaschkas lived in landlocked Dresden, Germany, and were best known for their glass models of flowering plants, their fascination with marine invertebrates resulted in glass artistry that has never been replicated in modern times. These scientific glass models were commissioned in the late 19th century for Harvard, Cornell and other then-young universities because they were three-dimensional (unlike paintings or drawings) and bore no resemblance to the colorless, spirit-preserved corpses in jars that were used as teaching material at that time. Working from drawings and watercolors made during ocean-faring expeditions, the Blaschkas created more than 10,000 life-size, glass sculptures of marine life found in oceans not yet significantly impacted by climate change or large-scale human activity.

In her global journey to determine how many of the species depicted in the Blaschkas’ glass masterworks could still be found in the world’s oceans, more than 150 years later, Harvell was accompanied by fellow diver and cameraman David Brown (who worked with Harvell on the documentary, Fragile Legacy). Her book weaves together the anatomical perfection of the Blaschka’s glass artistry with her own natural history ode to marine invertebrates—jellies, anemones, sea stars, tubeworms, sea slugs, squid, octopuses and cuttlefish—in a way that is inspirational and compelling in equal measure. One consistent thread—the blurring of the boundaries between science and art, makes this book a marvelously unique introduction to the world of marine invertebrates. I hope you will enjoy it! 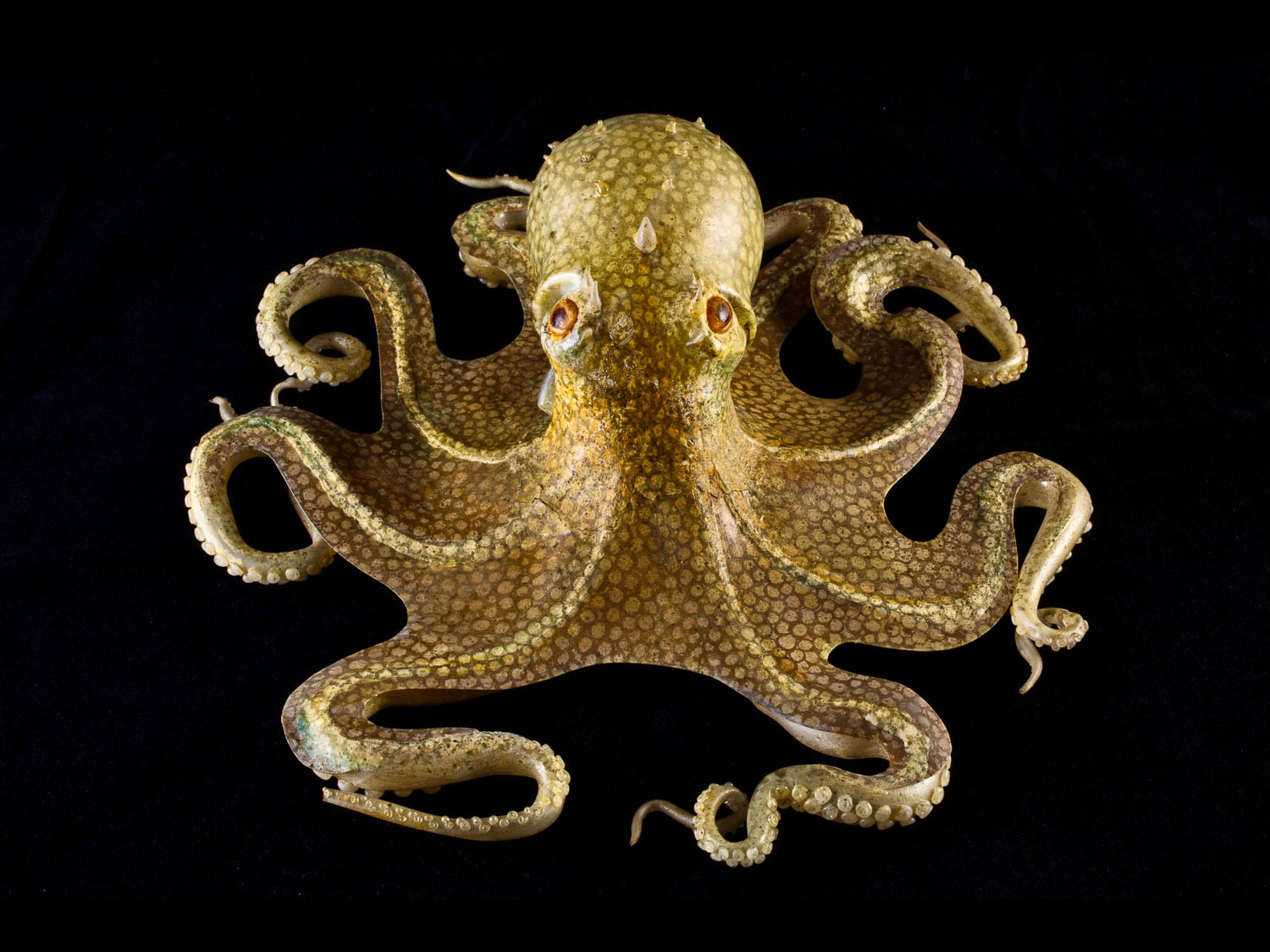 This common octopus (Octopus vulgaris) is from Cornell’s extensive collection of glass marine models created by Leopold and Rudolf Blaschka. The specimen is one of thousands of meticulously detailed marine invertebrate models fashioned between 1863 and 1890 by the father-son duo for research and education. Collectively, their work depicts more than 800 different species—including various anemones, squids, and sea stars—found in waters around the globe. 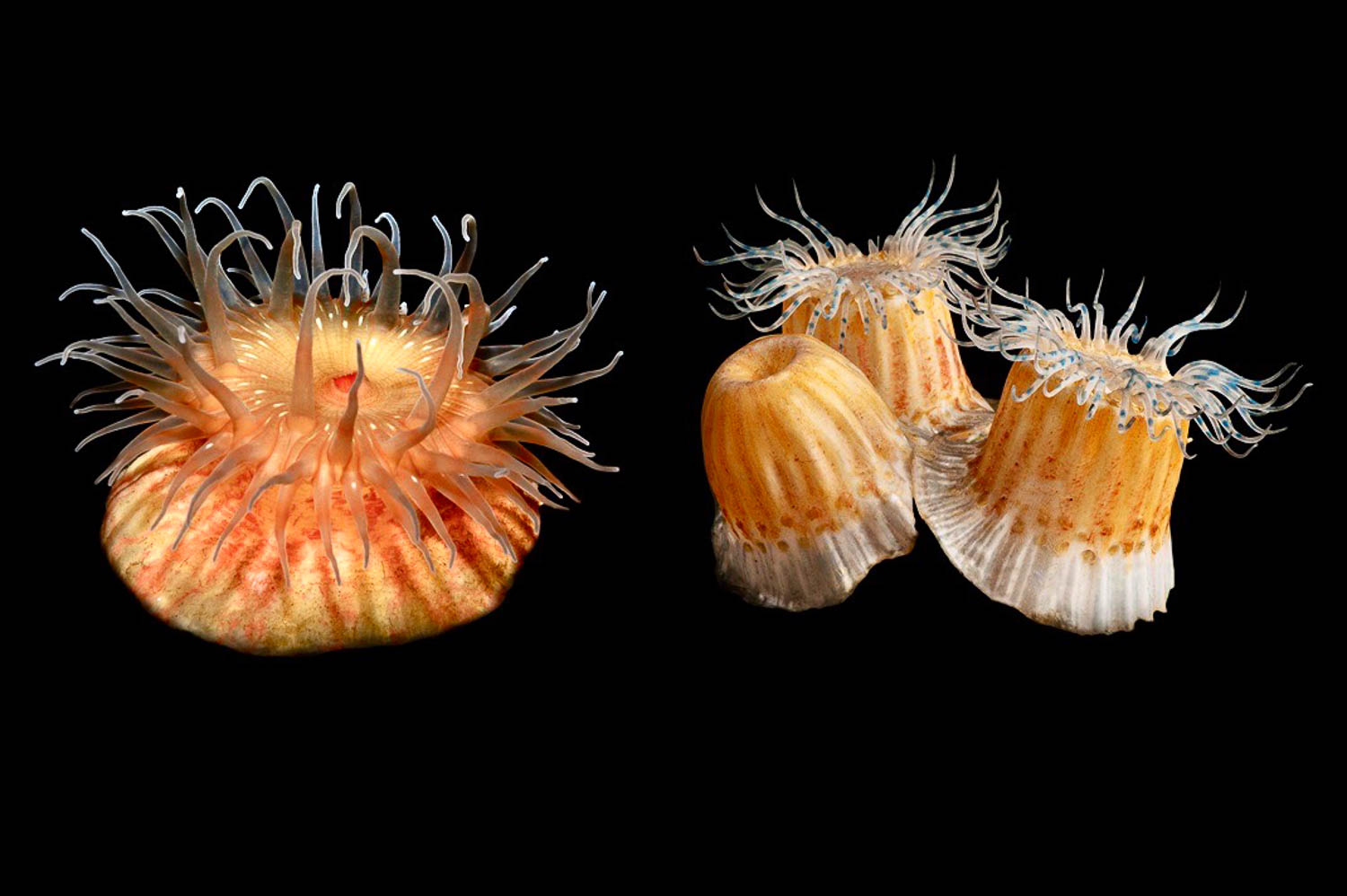 Photo Credit: Courtesy of Drew Harvell and Claire Smith. Swimming anemone (Stomphia coccinea) alive in the San Juan Islands, left, and on the right in glass by Leopold and Rudolf Blaschka 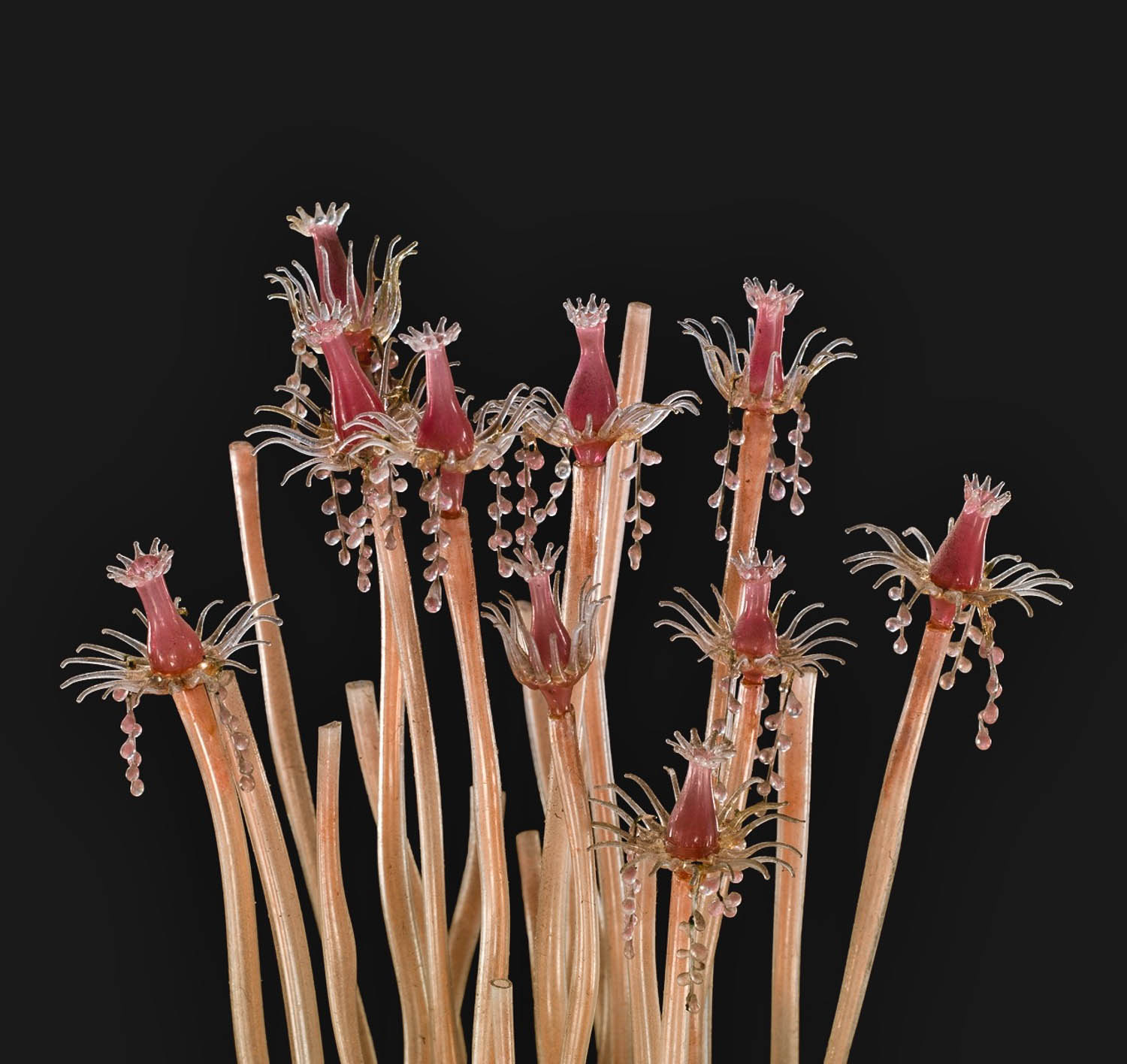 Photo Credit: Courtesy of Corning Museum of Glass. This magnificent glass model of the marine worm, Tubularia indivisa, is from the Blaschka Marine Life Collection and was created in 1885 by master glass artists, Leopold and Rudolf Blaschka.

← ePostcard #138: Windows on the World ePostcard #140: In Darwin's Footsteps--A Naturalist's Journey to Patagonia →