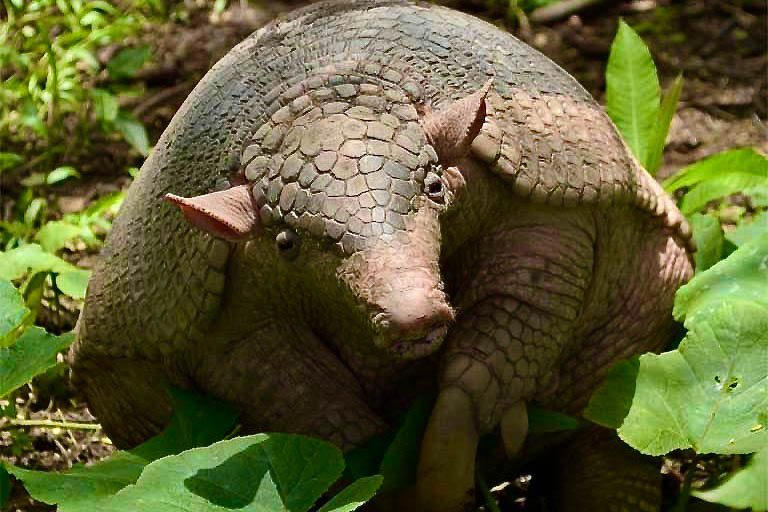 Photo Credit (above): Courtesy of Fernando Trujillo for IUCN. The Giant armadillo (Priodontes maximus) is one of the largest species of armadillos, and ranges in length from 2 to 3 feet. It is easily recognizable due to its powerful, enlarged central claw and the carapace, covered with tough bony scales.

After an exhilarating day hunting on horseback with some local gauchos, Darwin was treated to a traditional feast —armadillos roasted in their cauldron-like shell. Did he dine on giant or a hairy armadillos? We’ll never know for sure. A few weeks after his culinary introduction, of course, Darwin would collect a fossilized glyptodont carapace in Argentina at Punta Alta that he aptly described as an ‘armadillo on a grand scale’.

There are currently 20 living species of armadillo, and they all share a feature unique among modern mammals—beneath their outer scaly case is an inner shell made up of hundreds of small, interlocking bony plates. Armadillos belong to the order Cingulata, with only two surviving families: Chlamyphoridae containing the fairy armadillos, and Dasypodidae which encompasses the more common banded armadillos. They are xenarthran, placental animals unique to the Americas and have an evolutionary path that goes back some 59 million years to the Paleocene period. Armadillos are beautifully adapted survivors and also ecosystem sentinels in our modern world! 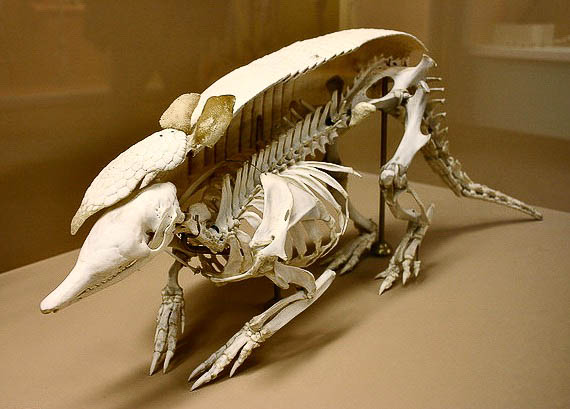 The giant armadillo is often referred to as a ghost species because they are largely nocturnal and difficult to observe. South American biologists see their efforts to o save this species as emblematic of the global struggle to save biodiversity. Lead conservationist Arnaud Desbiez worked in the Brazilian Pantanal for eight years before he set eyes on a giant armadillo. On one level this is surprising: a giant armadillo is as big as a pig. But it’s also rare, solitary and nocturnal, spending up to three-quarters of its life underground.

Giant armadillos reside in deep burrows, and they dig a new one every two days. So, even when a researcher locates a burrow, the giant armadillo may have already moved on. Their ecosystem role in providing burrows for other animal species is profoundly important. Brazilian researchers used camera traps to record activity at a vacated armadillo’s burrow and discovered that it hosted 80 different species, including ocelots, foxes, tamandua (anteater), porcupines, peccaries, tapirs and other smaller armadillo species, who were attracted by the burrow’s newly turned soil to forage for insects and roots, to hunt occupants seeking shelter, or as a nursery. I encourage you to take a look at the video link I’ve provided below. Imagine what it might be like to be the armadillo researcher, headlamp on your forehead and dangled by your ankles into the burrow’s entrance to check out the current occupants.

VIDEO LINK ( Behind the scenes with David Attenborough and BBC’s “Hotel Armadillo” ): 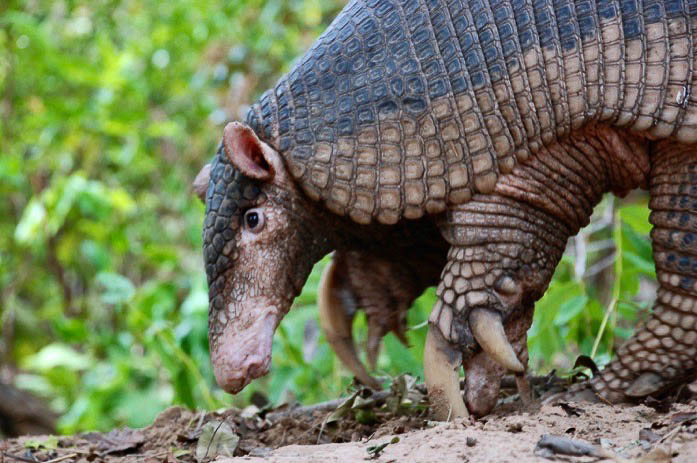 Like most armadillo species, giant armadillos are insectivores. Their diet primarily consists of termites, though they also consume ants, spiders, larvae and worms. Their preferred diet is described as myrmecophagous, which literally means “ant eating” (Ancient Greek: murmēx, “ants” and phagein, “to eat”). Termite specialists are referred to as termitophagous, but the two diet preferences often overlap. Giant armadillos live in a variety of habitats, preferring areas with a large population of termites. Giant armadillos are mainly nocturnal, and usually forage alone and socialize only for mating. When another giant armadillo appears on its home range, they do not defend the territory, preferring to simply ignore the intruder. They dig large burrows for resting, using their large claws like spades. Giant armadillos are not only strong diggers, they are also excellent swimmers, being able to their hold breath for up to 6 minutes.

Giant armadillos are quite rare (listed as Vulnerable/VU on the IUCN Red List) throughout their range, which includes southeastern Venezuela, the Guianas, northeastern Brazil, Paraguay and northern parts of Argentina. Ongoing population threats include subsistence hunting for meat, loss of habitat due to deforestation, killed as a pest by farmers, and illegal wild animal trade to wealthy collectors. 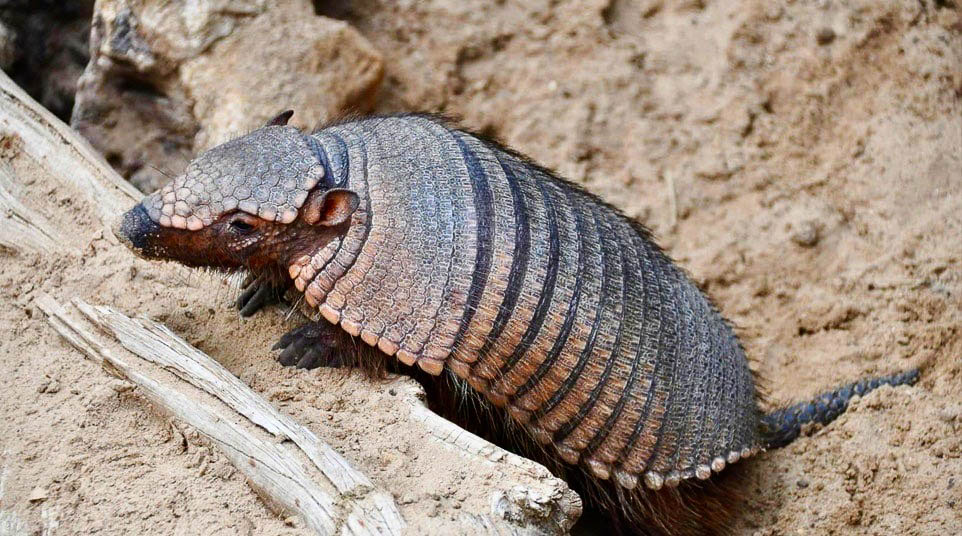 The large hairy armadillo is one of the biggest and most numerous armadillos in South America. It lives from sea level to altitudes of up to 4,250 feet across the southern portion of South America, and can be found in grasslands, forests, steppes and, increasingly, in agricultural areas. It is an insectivore and an accomplished digger that spends most of its time below ground. It makes both temporary and long-term burrows, depending on its food source. The armadillo can use specially evolved membranes in its nose to obtain oxygen from the surrounding soil particles without inhaling any of the soil itself. Armadillos are moderately well protected from predators by their carapace, a series of thin, bony plates along the head and back. The hairy armadillo reaches sexual maturity at around 9 months and has been known to live over 30 years in captivity. Though this animal is routinely harvested for its meat and its shell, or simply killed as a pest by farmers, it has shown amazing resiliency, and populations seem to be handling this level of exploitation. It is listed as Least Concern on the IUCN Red List. 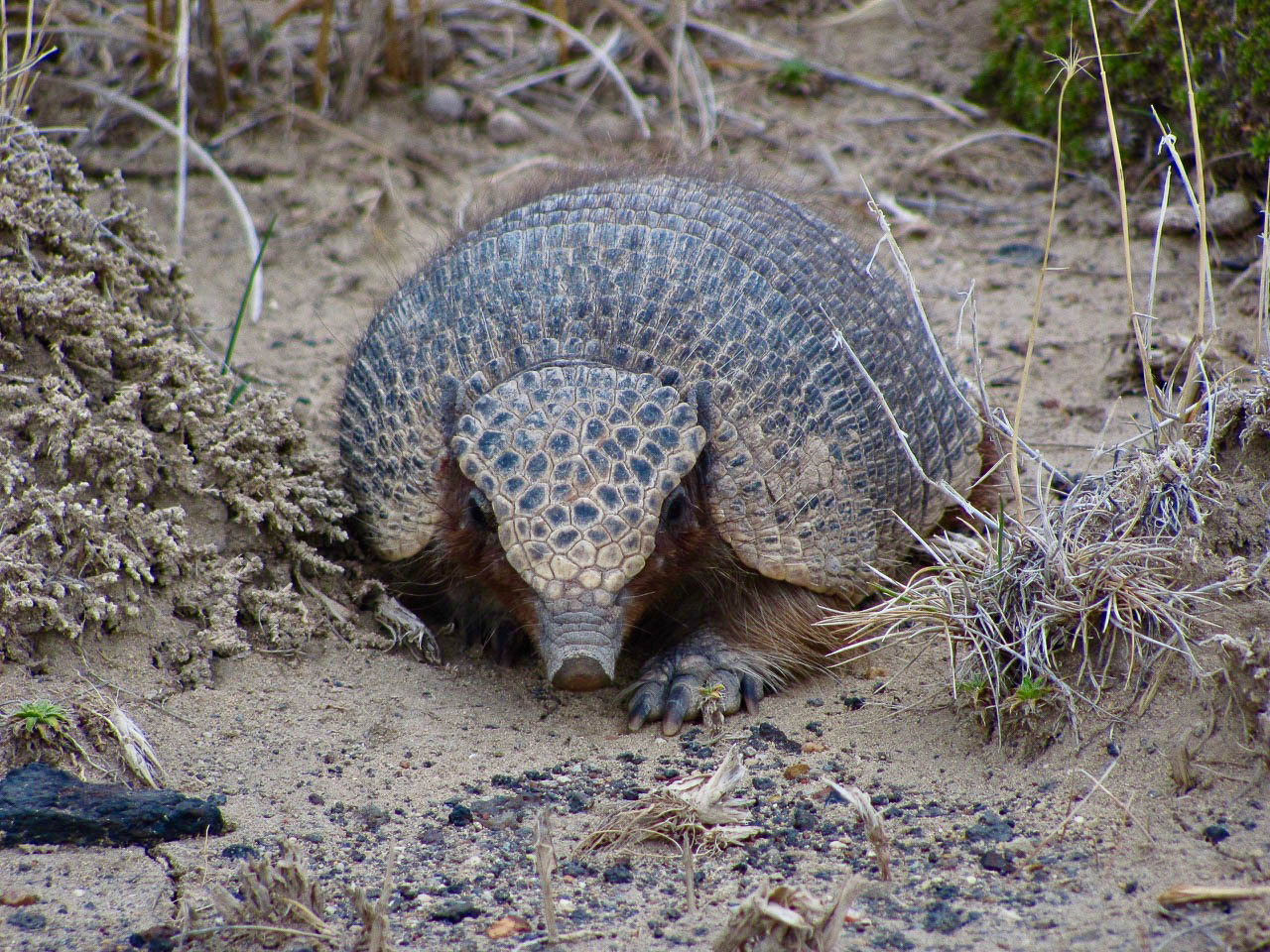 The pichi, also known as dwarf or pygmy armadillo, is native to Argentina and Chile. It is the only living member of the genus Zaedyus, and the only armadillo to hibernate during the cold season. This solitary species can also enter torpor during periods of environmental stress. Pichi have a relatively large home range within their arid habitat, and can be found in desert, xeric grassland and shrubland, and Patagonian steppe habitats, typically in sites with easy to dig sandy or volcanic soils. They can also be found in some degraded habitats, such as pastures and tree plantations. They are opportunistic omnivores with a preference for insects. They feed on beetles and their larvae, a variety of ant species, plant material, scorpions, spiders, other insects, soil-nesting bees, vertebrates such as lizards and small mammals, and fungi. Reproduction is restricted to the months of March-May, and the female gives birth to one or two young. The Pichi is currently listed as Near Threatened on the IUCN Red List. 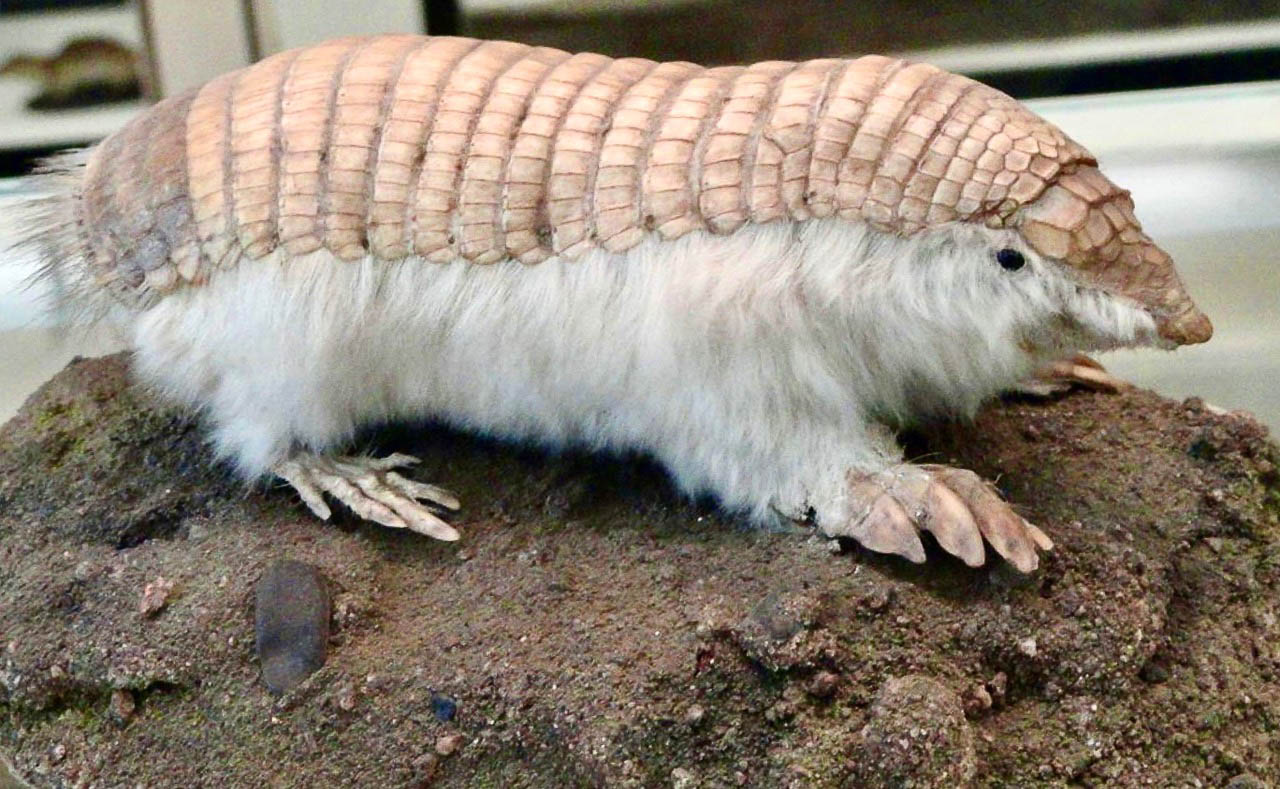 Photo Credit: Courtesy of animalia.org and a Wikipedia CC0 1.0 Universal (CC0 1.0 )Public Domain Dedication by an unknown photographer. The Pink Fairy Armadillo (Chlamyphorus truncatus), or pichiciego, is the smallest species of armadillo, with a maximum length of just under 5 inches. It is the only armadillo which has a dorsal shell that is almost completely separate from the body.

The pink fairy armadillo, the smallest species in the family, lives in central Argentina, and occurs south of Mendoza province and north of Rio Negro as well as south of Buenos Aires. They inhabit dry grasslands or sandy plains with cactus and thorn bushes. Pink fairy armadillos are generally solitary and nocturnal, staying protected underground and only coming out to feed at night. It digs burrows beside large ant colonies that provide a constant source of food. They have very small eyes and rely on hearing and touch to navigate. These tiny armadillos are amazing diggers, moving sand with their large front claws effortlessly, as if swimming through water. They dig so fast that they can bury themselves in their burrow in seconds when threatened, their armor plate functioning as a cork to seal the entrance to the burrow. They typically abandon their burrows during heavy storms because of the very real threat of drowning and dying of hypothermia. With an estimated population size of about 100 animals, the pink fairy armadillo is considered endangered. As is true for many armadillo species, the major threats include habitat destructions due to agriculture (the plowing of fields and soil compaction related to cattle ranching), predation by domestic dogs and cats, and poaching for the pet trade or the black market. Sadly, most specimens taken from the wild will die within 8 days. 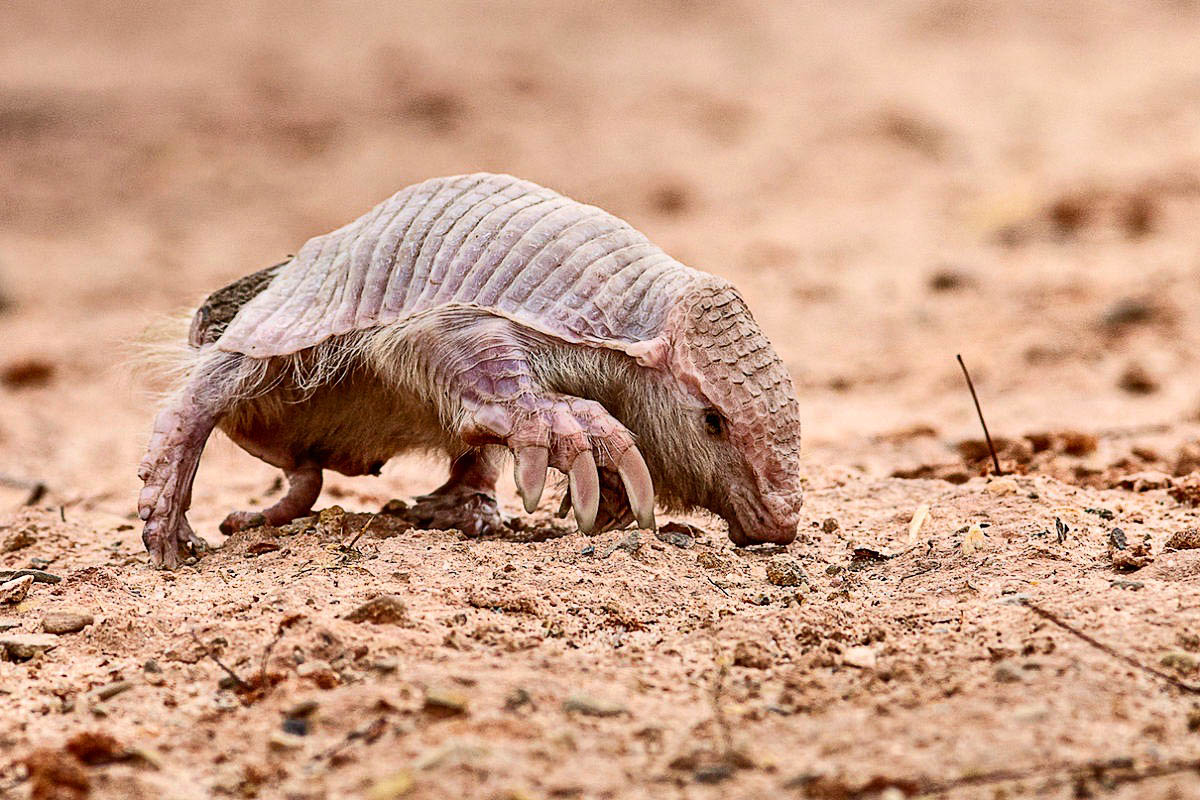 Photo Credit: Courtesy of Ivan Gutierrez Lemaitre. The six-inch long Chacoan fairy armadillo fits in the palm of your hand, and is the second smallest of its kind.

In 2020, a team of Bolivian biologists, including Nick McPhee, Huáscar Bustillos Cayoja, and Paula Silva, were fortunate in spotting one of the rarest mammals in the world, the elusive Chacoan fairy armadillo (Calyptophractus retusus), also known as the greater fairy armadillo. This almost mythical armadillo is known as culotapado in local lore or tatujeikurajoyava to the Guaranis of the Bolivian Chaco. It may be tiny but it is a digging machine when it locates buried prey. Note that its claws are huge, strong and very well-developed, and its front legs are extremely large, muscular and strong. This tiny amadillo lives among the Gran Chaco dry forests of Argentina, Bolivia and Paraguay–and is considered ‘data deficient’ by the IUCN, and is likely endangered.