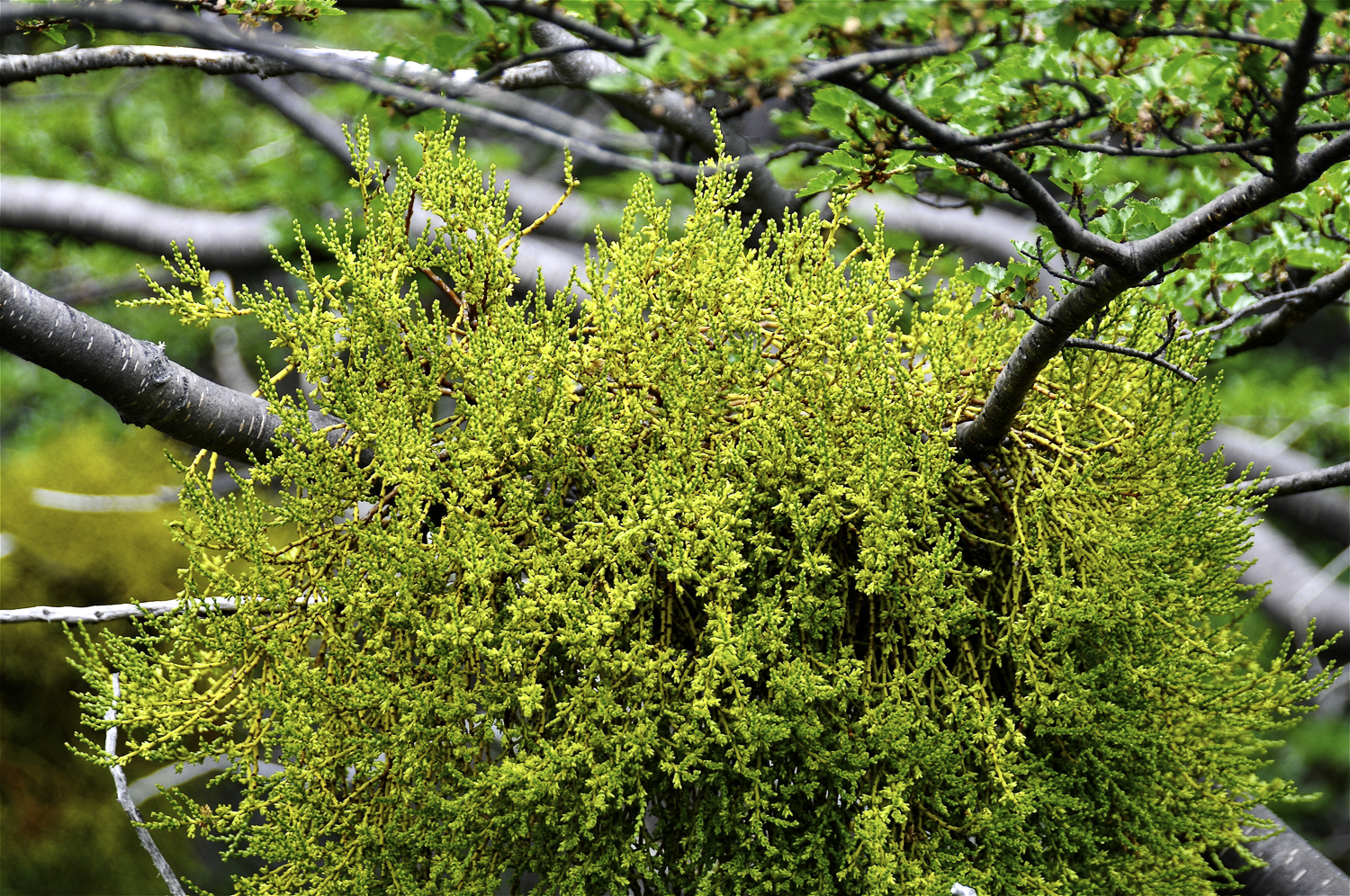 The traditional yuletide mistletoes that most of us are familiar with are the native European species, Viscum album, and the native North American species, Phoradendron leucarpum. References to mistletoe date back to when Great Britain was occupied by Rome (43-410 A.D.). The Romans themselves associated mistletoe with peace, love and understanding and hung sprigs of the white-berried mistletoe over their doorways to protect the household. Roman writings describe Celtic Druids cutting mistletoe from oak trees with golden knives and laying white cloth under trees so the mistletoe would not touch the ground as it fell. The Druids considered the plant sacred and used it as a symbol of fertility in ceremonies and hung it over windows to fight off evil. Many Pre-Christian cultures in Europe regarded mistletoe’s white berries as symbols of male fertility, with the seeds resembling semen. Some historians also trace mistletoe’s symbolism back to a dark tale in Norse mythology about Loki and the god Baldur. Mistletoe continued to be associated with fertility and vitality throughout the Middle Ages, and by the 18th century had become part of a Christmas tradition in which lovers kiss “under the mistletoe,” in order to gain protection from witches and demons. The timing of mistletoe’s emergence in Christmas celebrations in North America appears to coincide with the publication of Washington Irving’s The Sketch Book in 1820. In his chapter “Christmas Eve,” Irving’s footnote reads, “The mistletoe is still hung up in English farm-houses and kitchens at Christmas, and the young men have the privilege of kissing the girls under it, plucking each time a berry from the bush. When the berries are all plucked the privilege ceases.”

Mistletoe is the common name for a group of obligate semi-parasitic plants in the family Santalaceae, which are attached to their host tree or shrub by a structure called a haustorium. The parasitic plant produces carbohydrates on its own using the process of photosynthesis, but obtains water and nutrients through modified roots that penetrate the bark of its host. Mistletoe usually causes little to no harm to its host tree. These so-called “true mistletoes” should not be confused with a witches’ broom, which is an outgrowth of the host plant’s own tissues, rather than those of the parasite. Over the centuries, the term “mistletoe” has been broadened to include many other species of parasitic plants with similar habits, found in other parts of the world and classified into different genera and families. The family Misodendraceae, which occurs in Chile and Argentina, and is represented by just one genus, Misodendrum, includes several different species.

In Tierra del Fuego there are four species of Misodendrum, the most common of which is Misodendrum punctulatum. This mistletoe is native to the southern half of Chile and the foothills of the Patagonian Andes in southern Argentina, growing at altitudes of up to about 6,560 ft. (2,000 m). In terms of its ecology, Misodendrum mistletoe species prefer south-facing slopes both in shade and in deep shade. It requires humid conditions with abundant rainfall and dry periods that last no longer than a month. Misodendrum punctulatum grows as a hemiparasite, which means that it is partially photosynthetic but also obtains part of its nutritional needs from its host. It infects southern beech trees (Nothofagus), including the deciduous N. pumilio and N. antarctica, and the evergreen N. dombeyi and N. betuloides. The “leaves” of the hemiparasite are actually scales with reduced photosynthetic activity. Small flowers are produced in spring in the axils of the leaves on second-year growth. These are followed by small, bristly achenes (one-seeded fruits). Misodendrum disperses to new trees by means of its wind-borne seeds, the bristles helping the seeds adhere to small branches of suitable host trees. These branches are usually less than four years old, suggesting that the germinating seedling is unable to cope with penetrating thicker bark. There is an incubation period lasting several years during which the new mistletoe plant obtains its nourishment from the host tree before producing aerial shoots. Mistletoes in the genus Misodendrum are the only wind-dispersed hemiparasites. 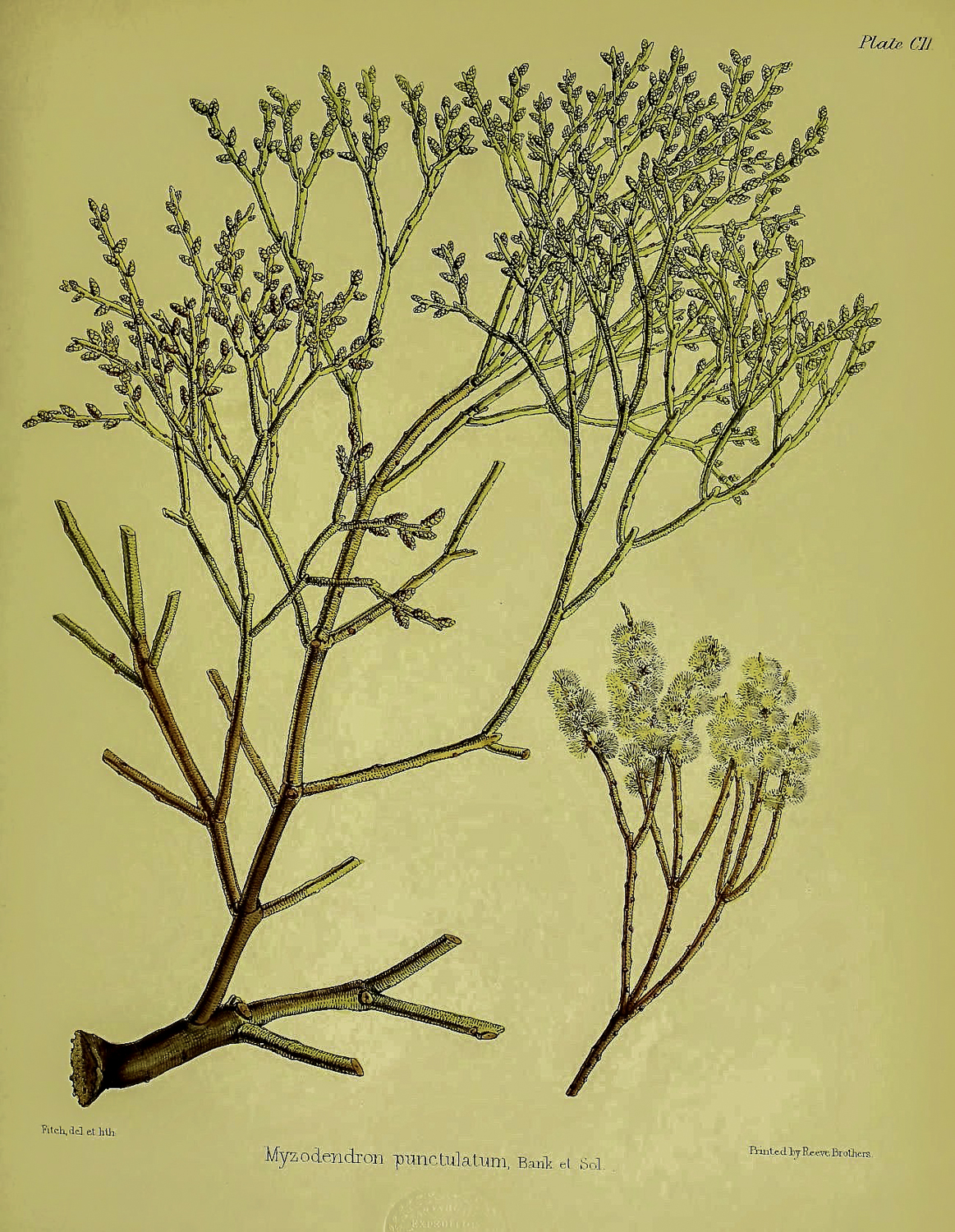 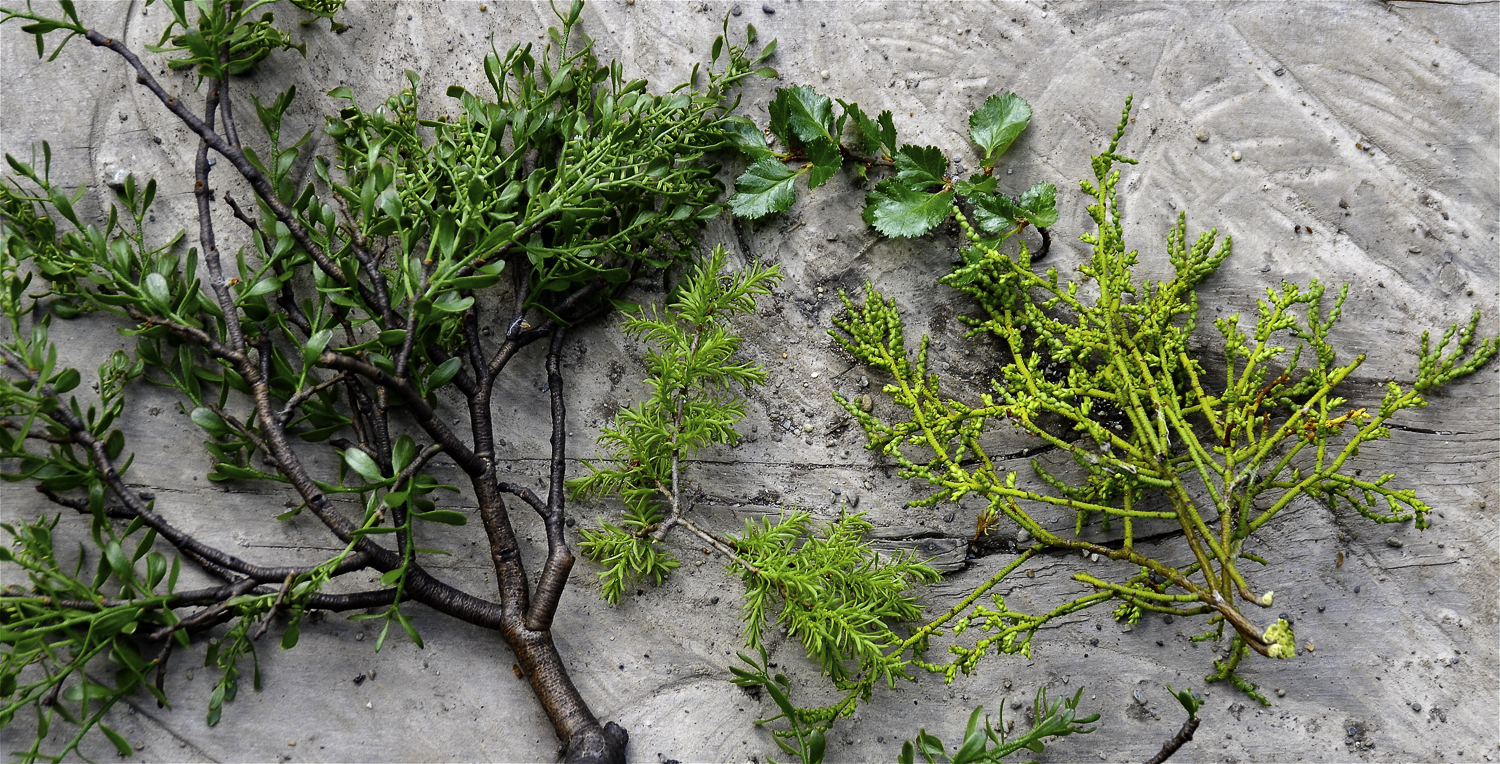 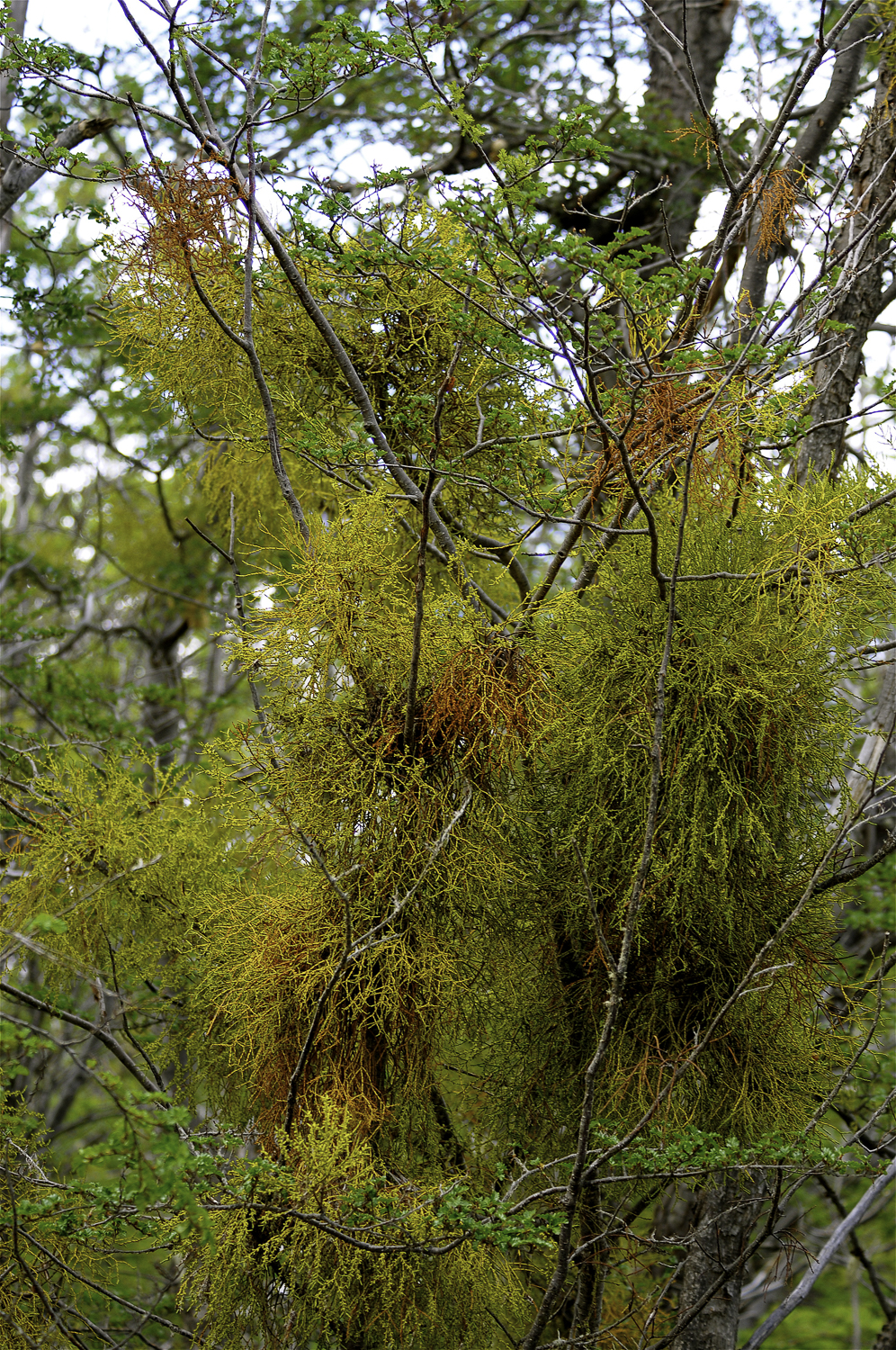