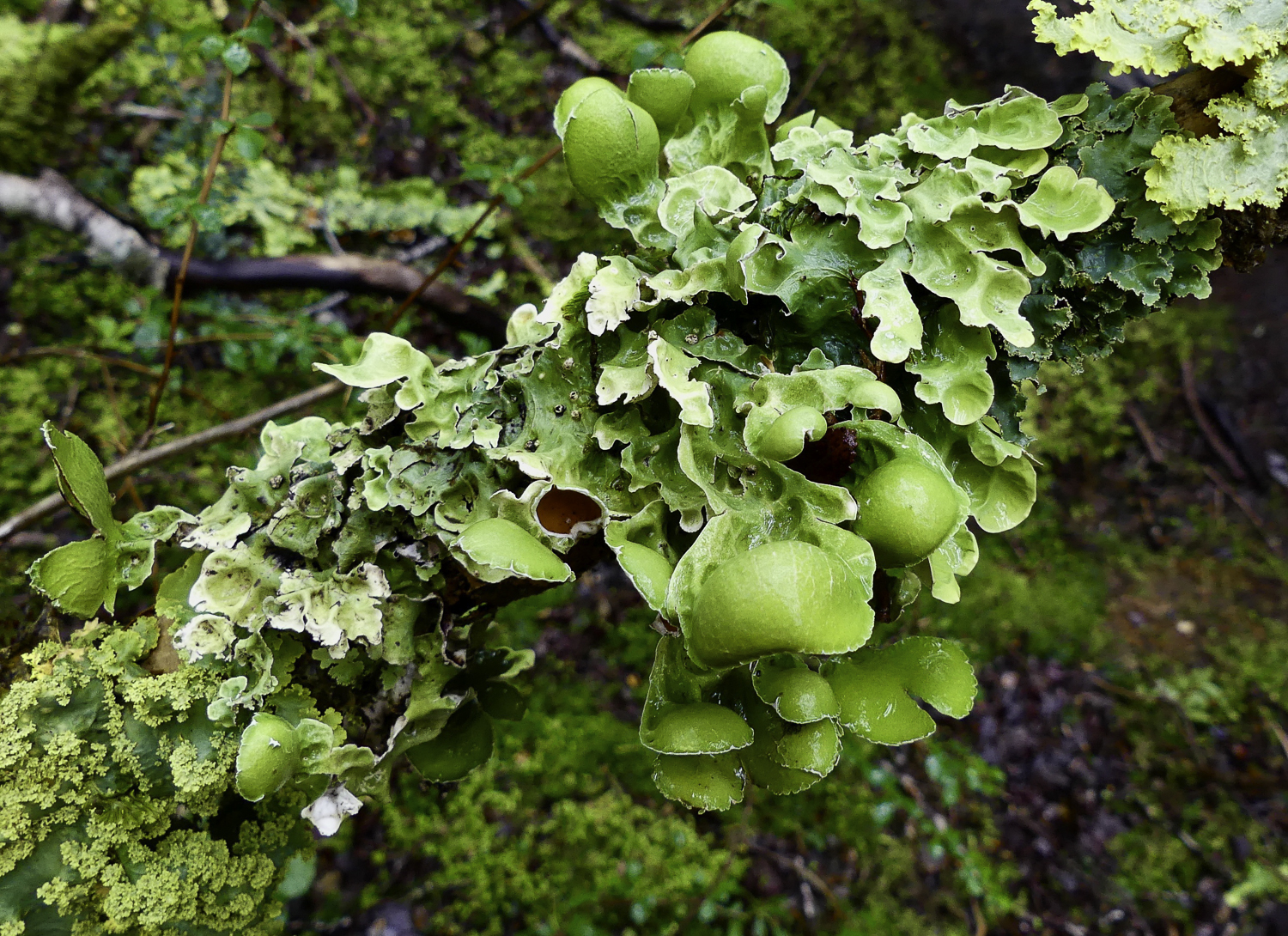 Exploring the beautiful lichen gardens that grace the trees and forest floor of the Magellanic rainforest in Tierra del Fuego opens a window on an amazing world. If you were able to count all of the different kinds of “little plants” growing on the trunk and branches of a single Nothofagus tree you would find more than 100 species of liverworts, mosses, and lichens. Observing the diversity of growth forms, reproductive strategies, textures and luminous colors of these non-vascular plants is a stunning experience and you’ll want a 10x hand lens and a camera with a good macro lens. With this ePostcard, I’ve focused my introduction on lichens and, more specifically, on the foliose (leafy) lichens. I have provided a basic primer on lichen biology, with illustrations and diagrams drawn from a lichen course I took years ago, to help you understand what you are seeing in my photographs and on your own explorations. Although temperate rainforests are a great place to begin discovering the “world of little plants,” either in the Pacific Northwest or the Southern Hemisphere, I would encourage you to explore wherever you live as a reminder of the wonders of the natural world.

A lichen consists of a simple photosynthesizing organism, usually a green alga or cyanobacterium (the photobiont), surrounded by filaments of a fungus—a symbiotic association that benefits both partners. Generally speaking, a lichen is mostly made up of interwoven fungal filaments, and the fungus is called a mycobiont. Lichens are sometimes referred to as the “fungi that invented agriculture.” Fungi, instead of producing their own food by photosynthesis as vascular plants do, need to “eat” something. The body of most fungi consists of pale, hairlike filaments called “hyphae.” Hyphae are the organs fungi use to acquire food, either by secreting extracellular digestive enzymes and then directly absorbing the digested food (mushrooms do this), or, as in some parasitic and symbiotic fungi (including lichens), by using special absorptive hyphae to adhere closely to, surround, or even directly enter the cells of other organisms to obtain food. In both molds and the underground portions of mushrooms, the hyphal strands are loose and sparsely arranged. Often, however, hyphae are packed tightly together, forming a firm, macroscopic (visible to the unaided eye) complex structure such as a toadstool, a shelf fungus, or a lichen.

There are 3 types of lichens—crustose, foliose, and fruticose (refer to #5 ). We’ll focus on foliose lichens, which are flat and leaf-like (refer to #6). Growth occurs at the outer margin and is usually in a circular pattern.  Areas of faster growth produce lobes which may be large or small depending on the species.  Some species of foliose lichens may grow together, coalescing into large indistinct patches. Some foliose lichens lie very flat on the substrate while others may have edges that curl above the substrate. As shown in drawing #6, most foliose lichens are stratified into four layers: the upper cortex, algal layer, medulla and lower cortex. The skin-like outer surfaces, composed of firmly compressed cells, are the upper and lower cortex. Most of the area between the upper and lower cortex is occupied by a loose, cottony tangle of hyphae termed the medulla. Sandwiched between the medulla and the upper cortex, where sunlight and moisture can penetrate, is the thin but crucial algal layer. This is a colony of single-celled photosynthesizing organisms, typically green algae, which are “farmed” by the fungus. Rhizines, the tiny hold-fasts that resemble roots and anchor the lichen to the substrate, are typically found on the lower surface.

Lichen reproduction and colonization can occur in two ways: through the production of sexual spores, or by some form of asexual fragmentation. Spores are microscopic, single cells that can develop into new multicellular organisms. The fungus group to which the great majority of lichens belong, the phylum Ascomycota, are sometimes called “cup fungi,” because the specialized spore-producing hyphae (the asci) are packed together in a neat little button-shaped cup, called the apothecium. When the fungal spores are released into the air from the apothecium and blown to a new site where they can potentially germinate, they must immediately locate their correct photosynthetic algal partner or they will die, unable to acquire food.

When lichens reproduce asexually, by fragmentation, a small portion of the lichen thallus containing both partners breaks off and is transported to a new location where it grows into a new thallus. Many lichens have specialized structures that enhance fragmentation. The most common asexual propagule (the small particle capable of forming a new organism) is a soredium. Soredia are very tiny (barely visible to the unaided eye), dust-like or granular balls of hyphae intertwined with algal cells. They are usually aggregated into easily-seen rough patches, called soralia, that are located on the flat surface of the lichen, or along its margin. A somewhat less common asexual propagule is the release of isidia, which are tubular projections containing bits of fungal cortex and the underlying algal layer.

#1. There are basically 3 species of foliose lichens in this photo. The beautiful species in the center (with the brown apothecia) is Nephroma antarcticum (Nephromataceae), and its main photosynthetic partner is a green alga. . Note that the foliose thallus of the lichen is a  lighter shade of green than the brilliant green lobes that hold the brown apothecia.

#2. Another view of Nephroma antarctica with more apothecia.

#3. This species, Pseudocyphellaria granulata (Lobariaceae), forms large green-yellow thalli of elongate lobes with conspicuous granular soredia along the lobe margins and on the surface. Its photosynthetic partner is a green alga. Isidia are small surface outgrowths of the upper surface of a lichen which break off to form new lichens.

#4. Another view of Pseudocyphellaria granulata. If you look closely, you’ll spot several brown apothecia in addition to the granular soredia. This indicates that the species reproduces both sexually and asexually.

#5. This diagram (with examples) shows the three types of lichens—crustose, foliose, and fruticose.The foliose and fruticose lichens are called macrolichens because they are generally easy to see without magnification. The crustose lichens are sometimes called microlichens.

#6. This is a labeled cross-section of a foliose lichen.

#7. This photo shows a cross-section of a foliose lichen thallus. Note the layer of single-celled, photosynthetic green algae and the cup-shaped apothecia (brown center).

#8. This diagram illustrates the algal and fungal association that creates a lichen. 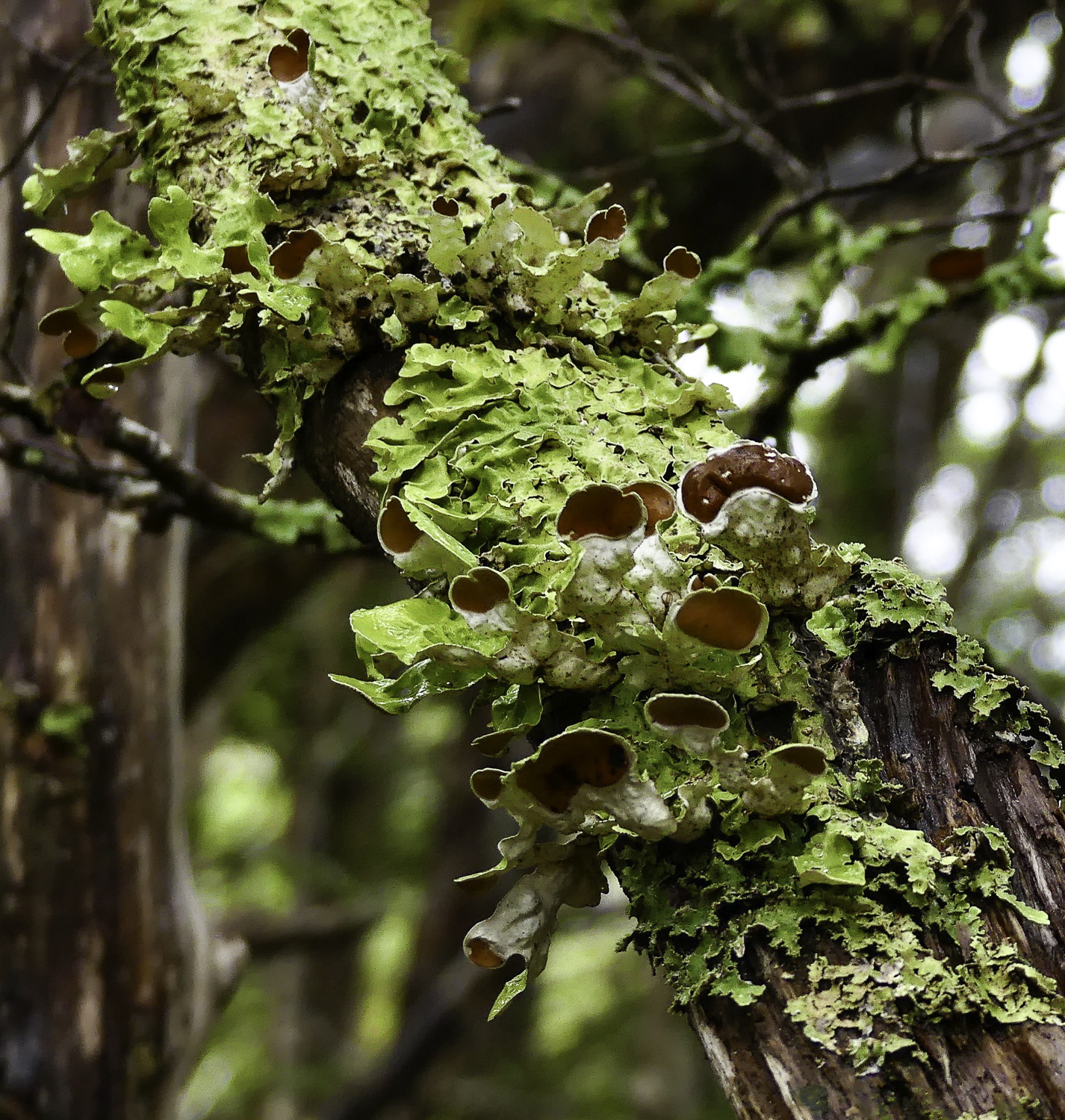 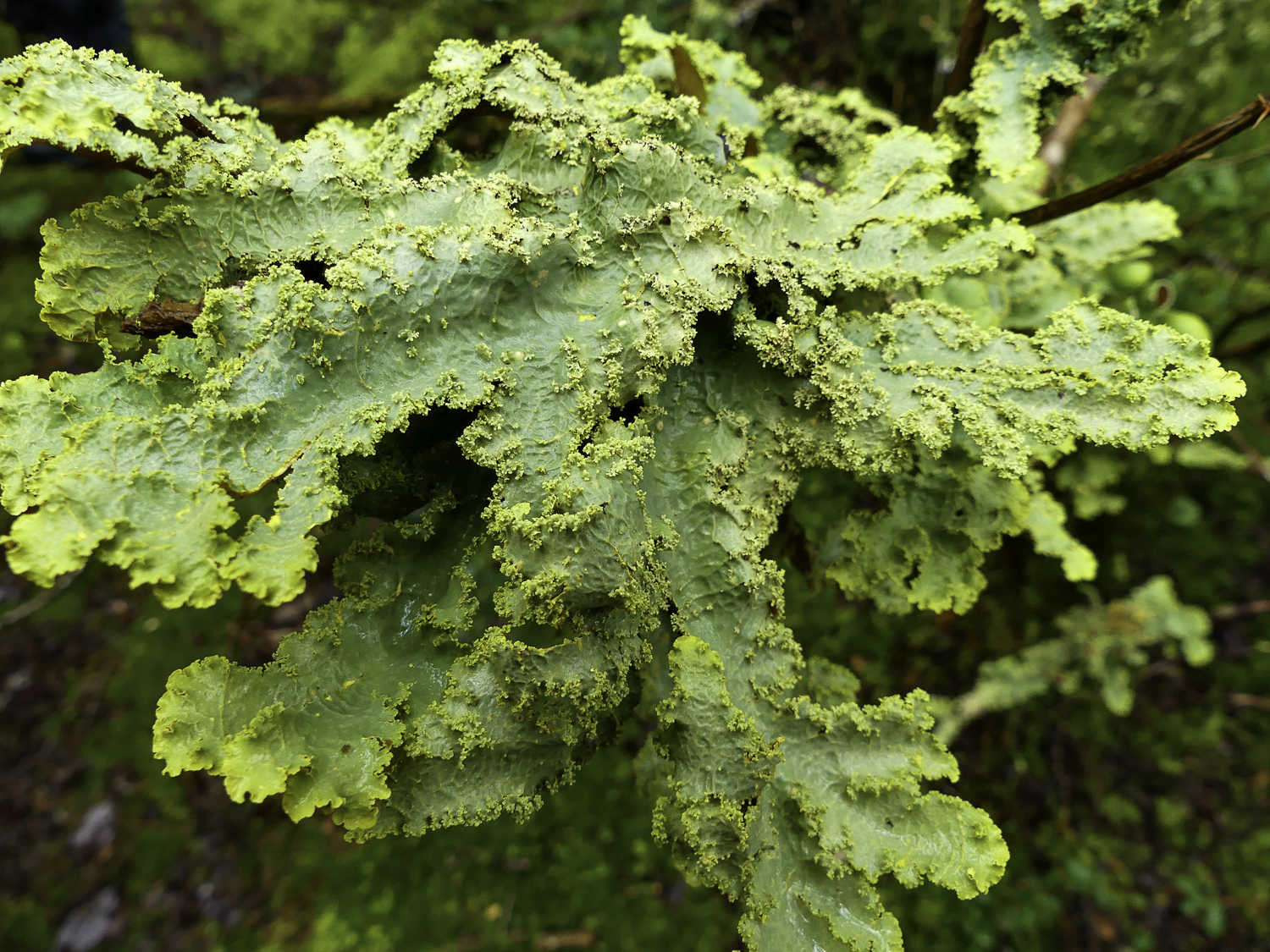 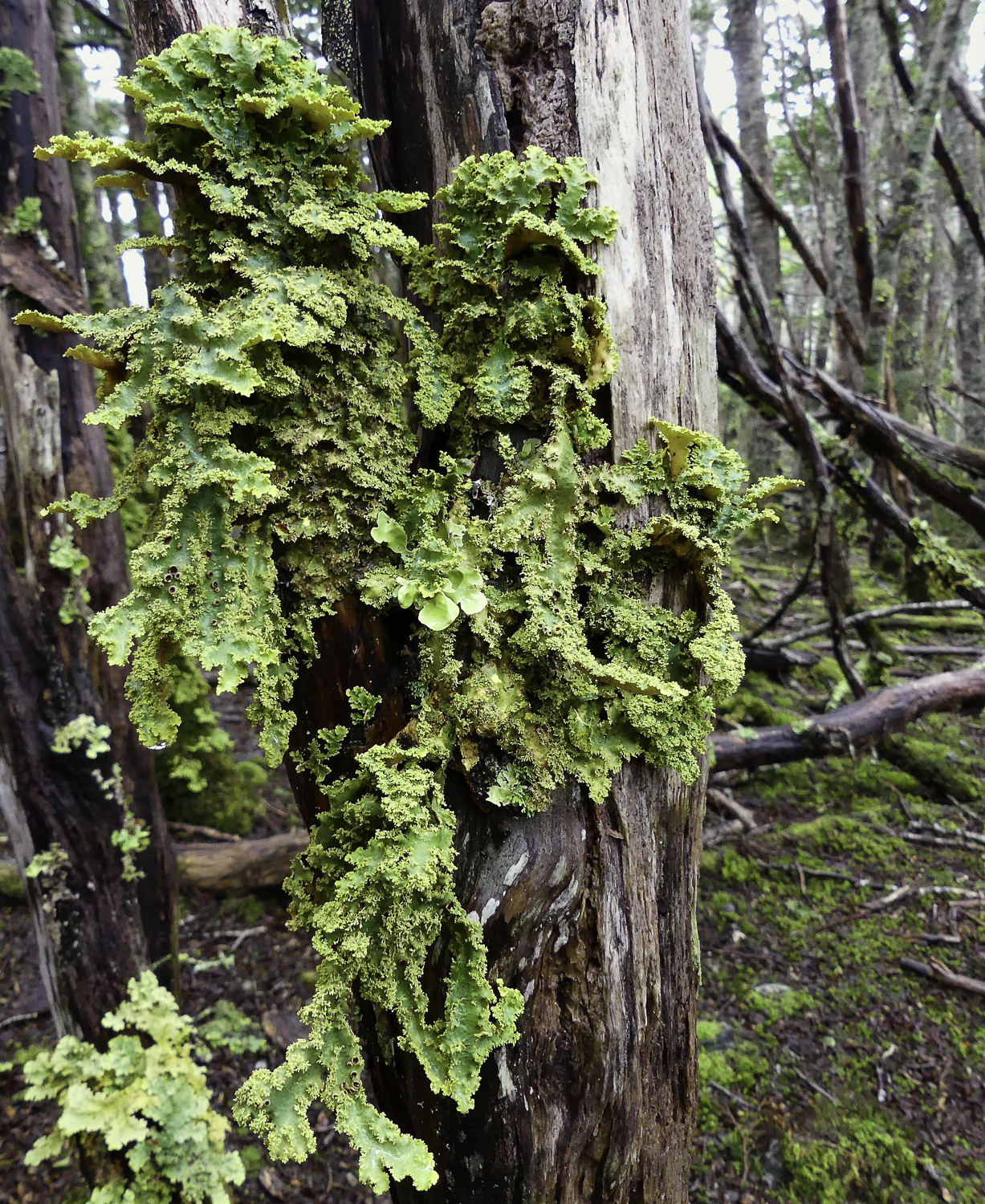 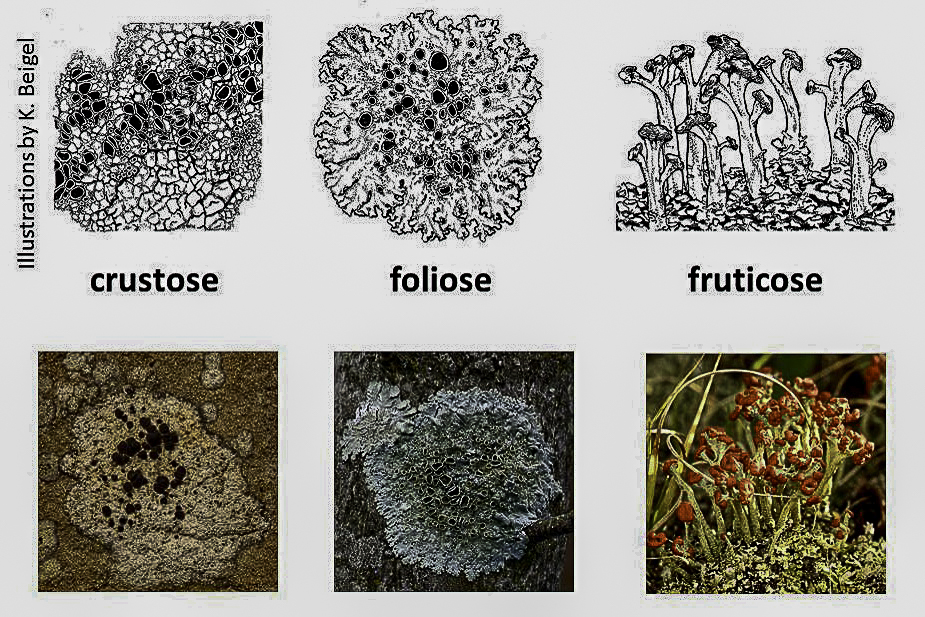 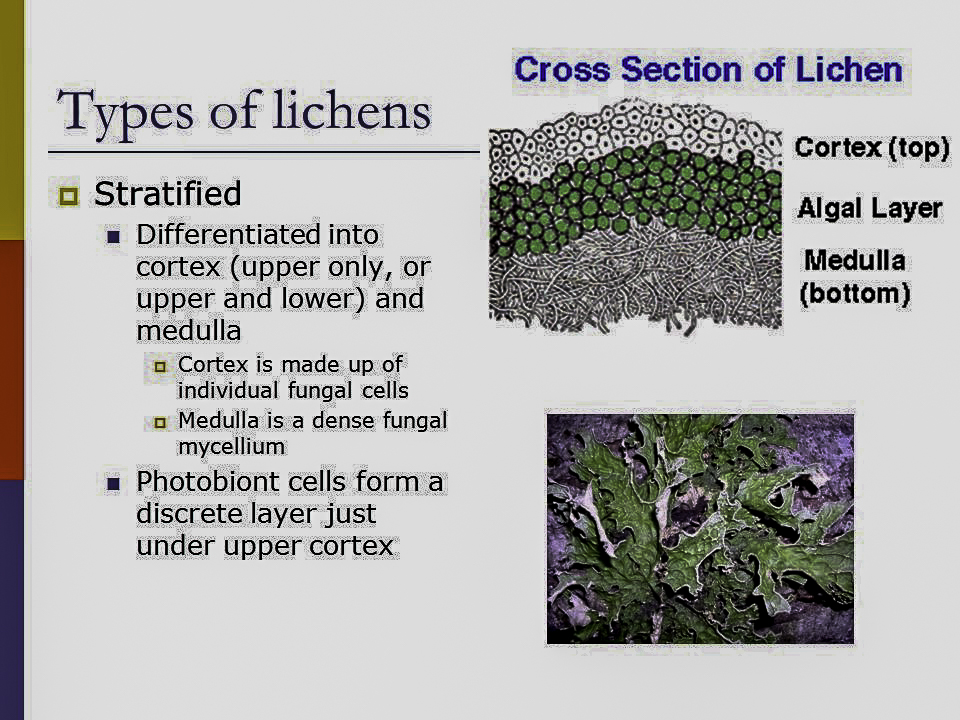 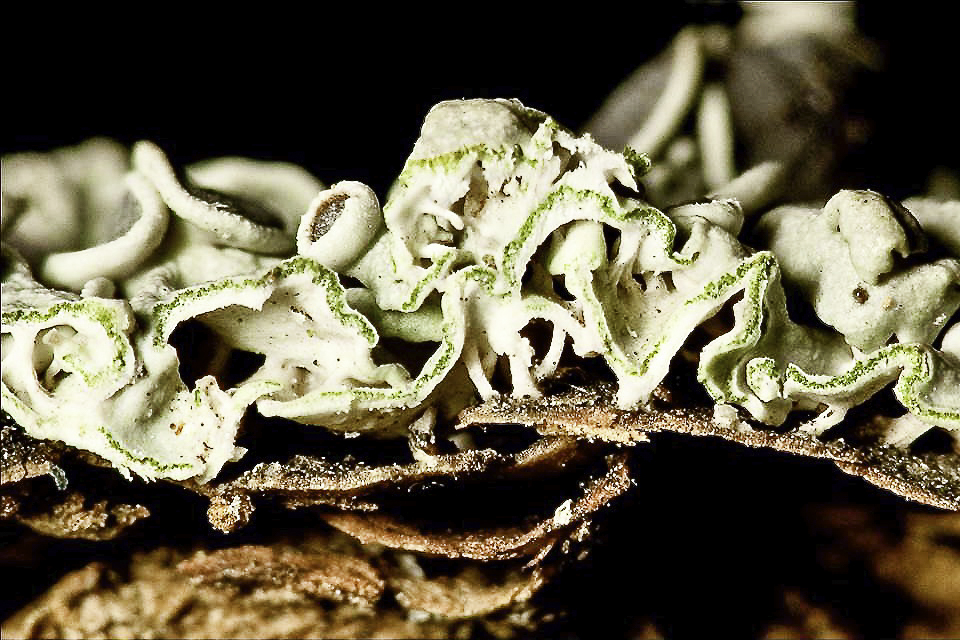 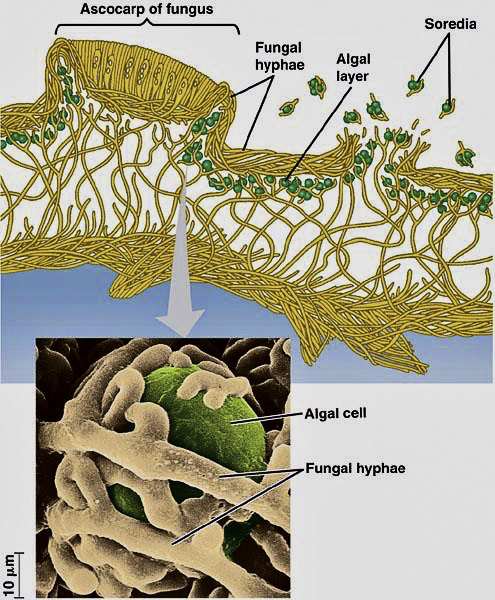