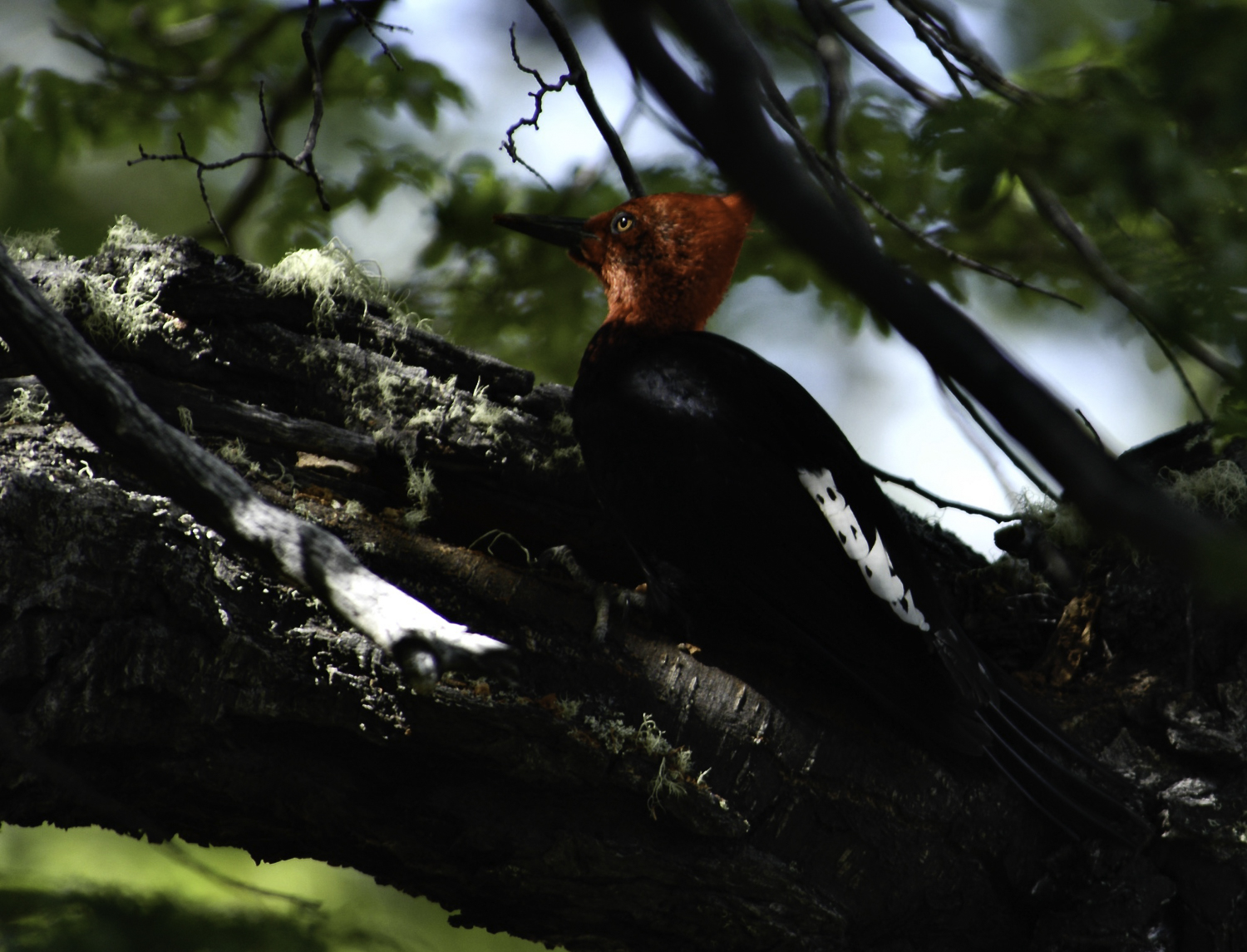 My first trip to Patagonia and Tierra del Fuego was in the austral spring of 1999. It was not a Cloud Ridge trip, but I certainly had one in mind for the future. Our guide was the inimitable Carol Passera, a naturalist in the classic tradition, and we became life-long friends and colleagues. When we were in Tierra del Fuego, I was excited to see my first Magellanic woodpecker and Carol explained that the best way to locate and observe this elusive woodpecker was to listen for the loud, double-knock drumming sound that it makes with its bill. In the profound quiet of these forests, where any intruder is readily detected, this isn’t as easy as you might imagine.

Magellanic woodpeckers are somewhat shy, especially during the breeding season, and have a tendency to keep on the move when disturbed. On this particular morning, as soon as we heard loud percussive drumming, we stopped and scanned the trees with our binoculars. Spotting several freshly excavated holes in the Nothofagus trunks where the woodpeckers had been foraging we approached closer. We heard an explosive series of nasal calls and saw a flash of white as an all-black female flew off towards a silvery snag with a large, oval-shaped cavity hole near its top. She didn’t land on the snag and we could see no sign of her in the direction she’d flown. Carol, using a rock, began a perfect rendition of Magellanic woodpecker drumming on the nearest trunk, repeated at intervals. The “real” drummer responded, louder and closer than before. We watched as three woodpeckers, two adults and a juvenile female, flew to the snag and landed on its trunk. We could hear the juvenile’s shrill begging, watching as she was fed a huge white grub. I’ve always loved watching woodpeckers, but this chance to observe a family trio of Magellanic woodpeckers was an amazing experience.

Magellanic and Patagonian temperate forests, dominated by either Nothofagus or Auracaria, have existed as “ecosystem islands” for several million years and are home to a unique fauna that includes several endemic species, including the Magellanic woodpecker, rufous-legged owl, and the tiny arboreal marsupial, monito de monte (Dromiciops gliroides). Many bird species choose to nest or roost in tree cavities in these forests, which provide shelter from the weather and a measure of protection from predators. Woodpeckers are “primary cavity nesters,” which means that they have the ability to excavate the cavity holes that they use for breeding and night roosting. In doing so, albeit unintentionally, they increase the availability of cavities for birds and small mammals, the “secondary cavity nesters,” who are unable to excavate cavities on their own. The life histories of these cavity-nesting species are complexly interwoven with those of the primary cavity builders, such as Magellanic woodpeckers, striped woodpeckers and Chilean flickers. In fact, Magellanic woodpeckers play such a major role in the structure and function of these temperate forest ecosystems that biologists refer to them as a “keystone species” because the ecosystem services they provide are critically important to many species.

Learning more about this keystone species, and the critical role that it plays in the Magellanic and Patagonian temperate forests of Chile, Argentina and Tierra del Fuego, inspired me to offer a Cloud Ridge seminar emphasizing the natural history of these temperate forest ecosystems. Thanks to Carol’s efforts and with the help of researchers from the Departamentos de Ecología y de Zoología, at the Universidad Nacional del Comahue in San Carlos de Bariloche (Argentina), we explored the complex ecological relationships that define these forests and the species that depend on them. One of the highlights was a day with wildlife biologist Dr. Valeria Ojeda, one of the foremost experts on Magellanic woodpeckers, and her Projecto Carpintero Gigante research team. The hike into one of their key research sites in the Valle del Challhuaco provided a superb introduction. I have followed the research of Dr. Ojeda and and several of her colleagues over the past 20 years and this ePostcard shares photographs from our experience in the field and a brief overview of their research into the breeding behavior of this iconic woodpecker.

Magellanic Woodpeckers are highly territorial birds, defending large territories that include old-growth forests that provide large trees suitable for nest-cavity excavation and an abundance of wood-boring insects. During territorial disputes, the adults warn the intruders off with double-knocks, but sometimes the whole family, including juveniles, perform defensive behaviors such as wing spreads and chase flights. These woodpeckers, like most species in the woodpecker family, form monogamous pairs. Their mating system involves year-round residency in their established territory and a full-time partnership requiring a high level of parental investment by both adults.

Both woodpecker sexes excavate the nest hole, carving out an entrance hole just large enough for an adult to enter, and an interior chamber spacious enough for rearing young and roosting. The breeding season extends from October to January, and takes about 65 days. Two eggs are laid on consecutive days or after a 1-day interval. Nestlings are altricial and second-born nestlings nearly always die within 48 hours of hatching, due to starvation, so a single young is reared. In addition to the initial nest excavation, the monogamous pair shares duties such as incubation (lasting 15-17 days), brooding (lasting 45-50 days), nest sanitation and feeding of nestlings. Parental care is divided almost equally between partners for most activities except nest sanitation and night care, where males dominate. Nestlings are fed directly by their parents, without regurgitation, and a single prey is carried per delivery. The nestlings are fed inside the nest until they are able to reach the rim of the cavity entrance and be fed there (about day 22). Juveniles stay with their family group for up to 2 years or more, and are fed by both adults during their first year and sometimes longer. Adults normally breed every second year, a feature that has not been reported for any other woodpecker species and clearly reflects the intense parental investment in rearing a Magellanic chick. Nest cavities are seldom re-used and may eventually provide housing for secondary cavity nesters, including any of at least 20 species of small cavity-nesting birds, the rufous-legged owl, austral pygmy-owl, austral parakeet, Chilean swallow, several bat species, and monito de monte. 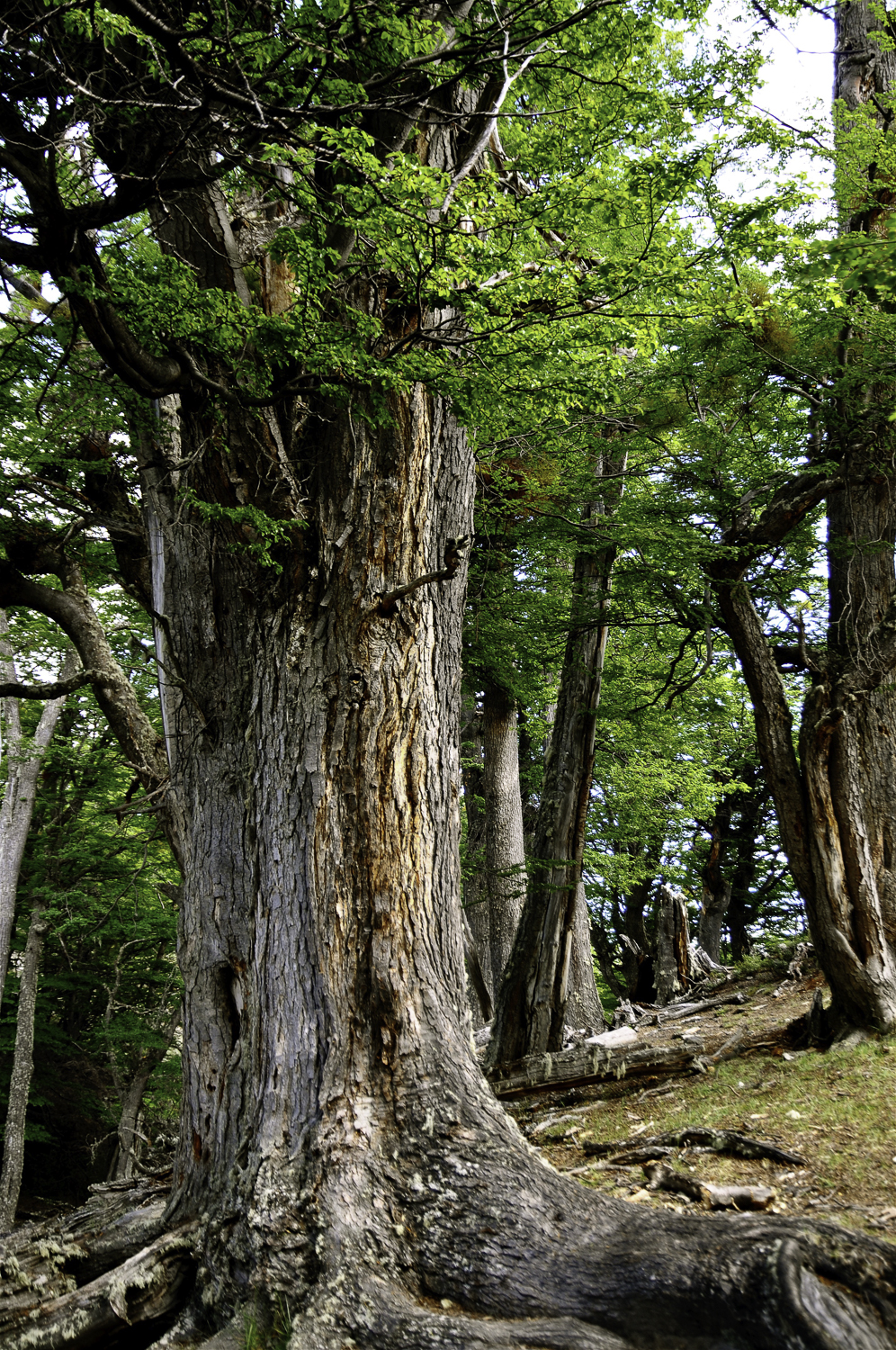 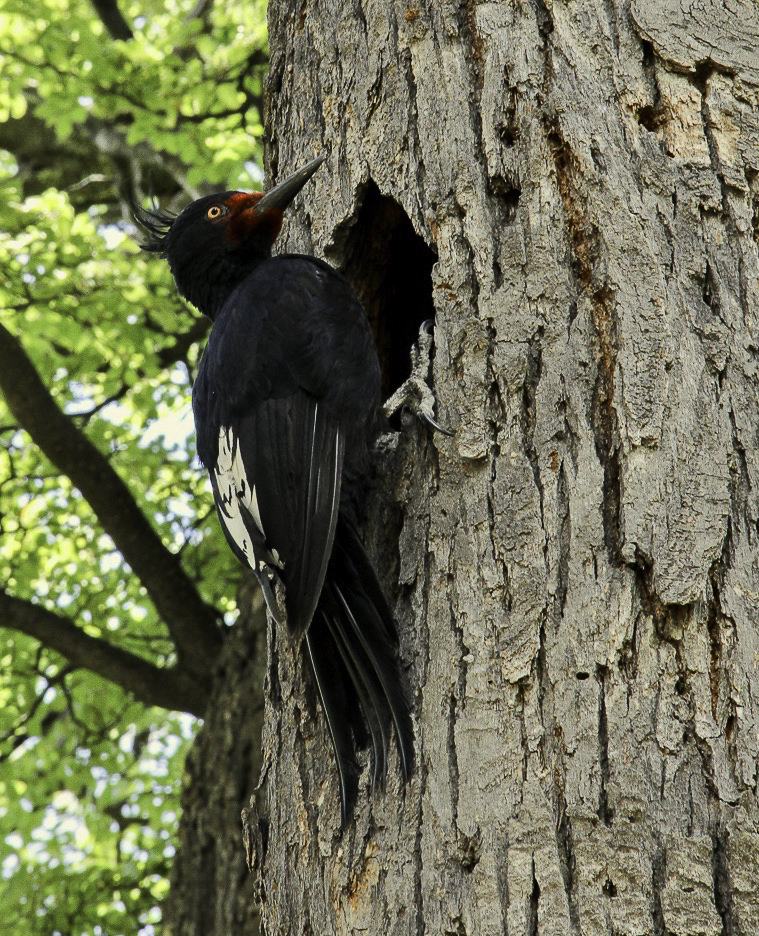 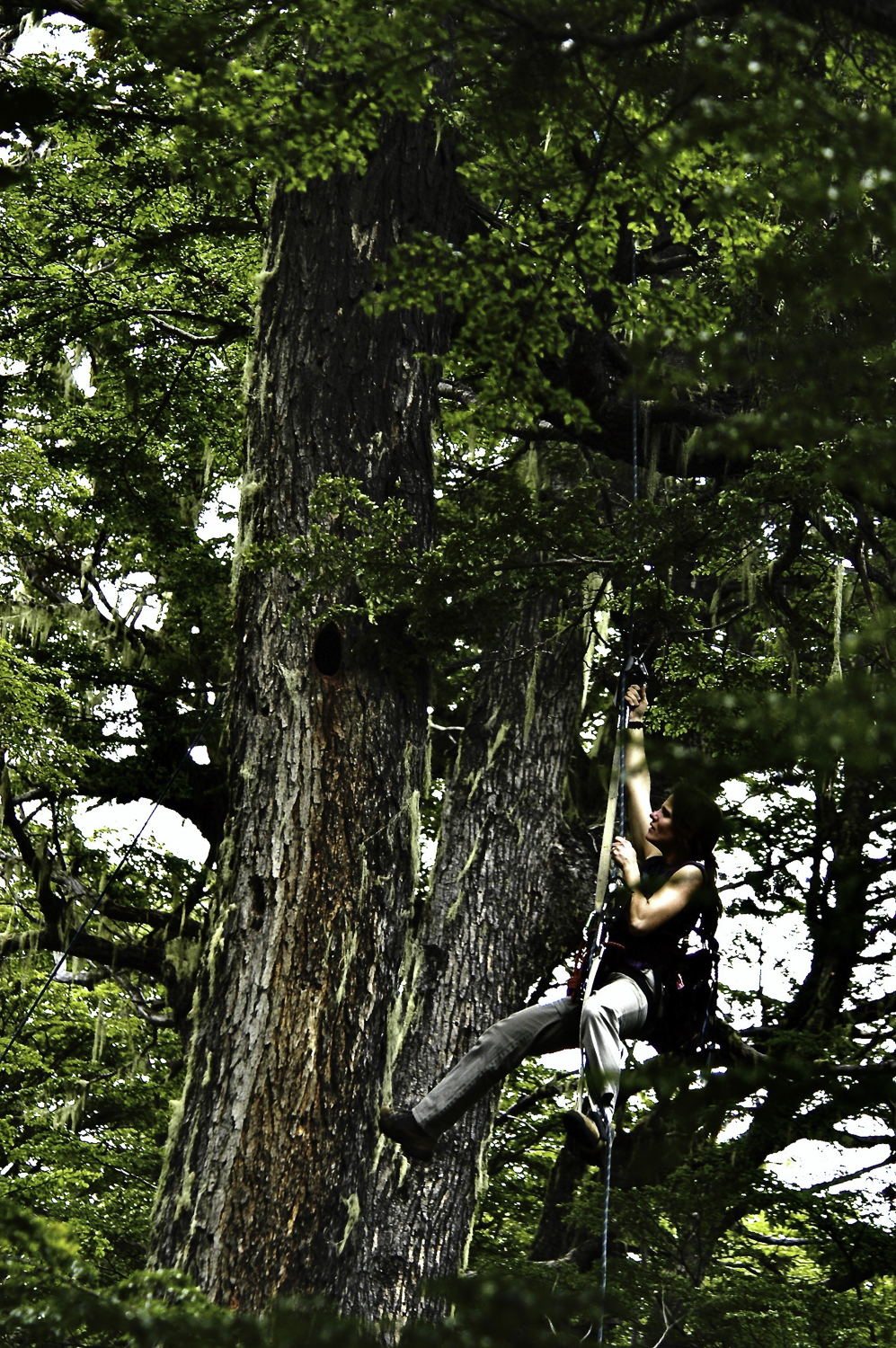 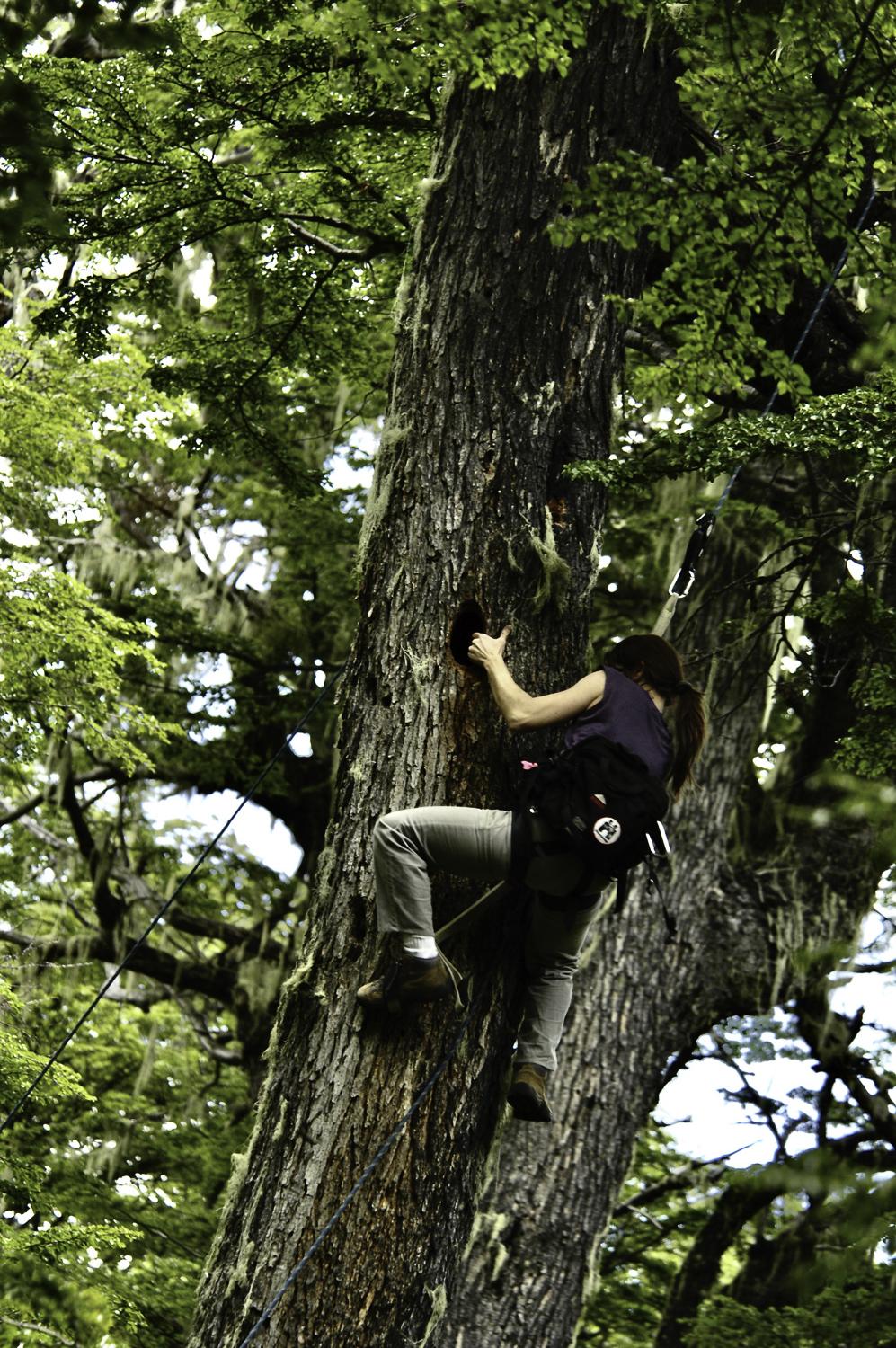 #4 & #5. Photo Credits: Audrey Benedict.
Caption: Joining Dr. Valeria Ojeda in her research area in 2004 helped us understand the logistical challenges and hard work required by a field project like this. Here you see Dr. Ojeda climbing up a nest tree of the Magellanic woodpecker (Campephilus magellanicus) to weigh and band the single nestling in Nahuel Huapi National Park, Argentina (2004). Dr. Ojeda gained access to the nest cavities by secured free climb. She did not use any techniques or equipment (spurs, pole climbers, cavity probes etc.) that could be harmful to the trees, nests or nest contents. Nests were examined with a mirror and flashlight, and contents were sometimes taken out for inspection. Eggs and nestlings were weighed and eggs were measured with a caliper. Valeria used a collapsible ruler and steel tape for measuring nest dimensions and height.
#6. Photo Credit: M. Lammertink. Dr. Valeria Ojeda with nestling Magellanic woodpecker in Nahuel Huapi National Park, Argentina in 2004. 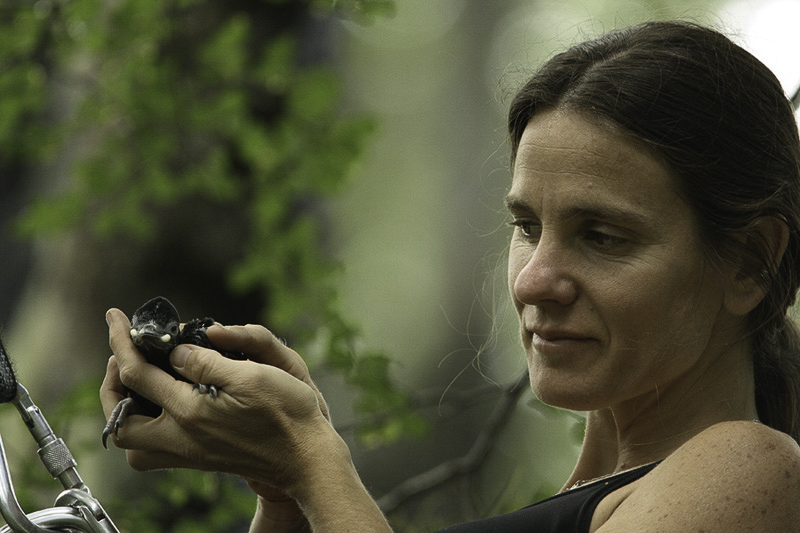