ePostcard #108: Do Woodpeckers Get Hammer Headaches? 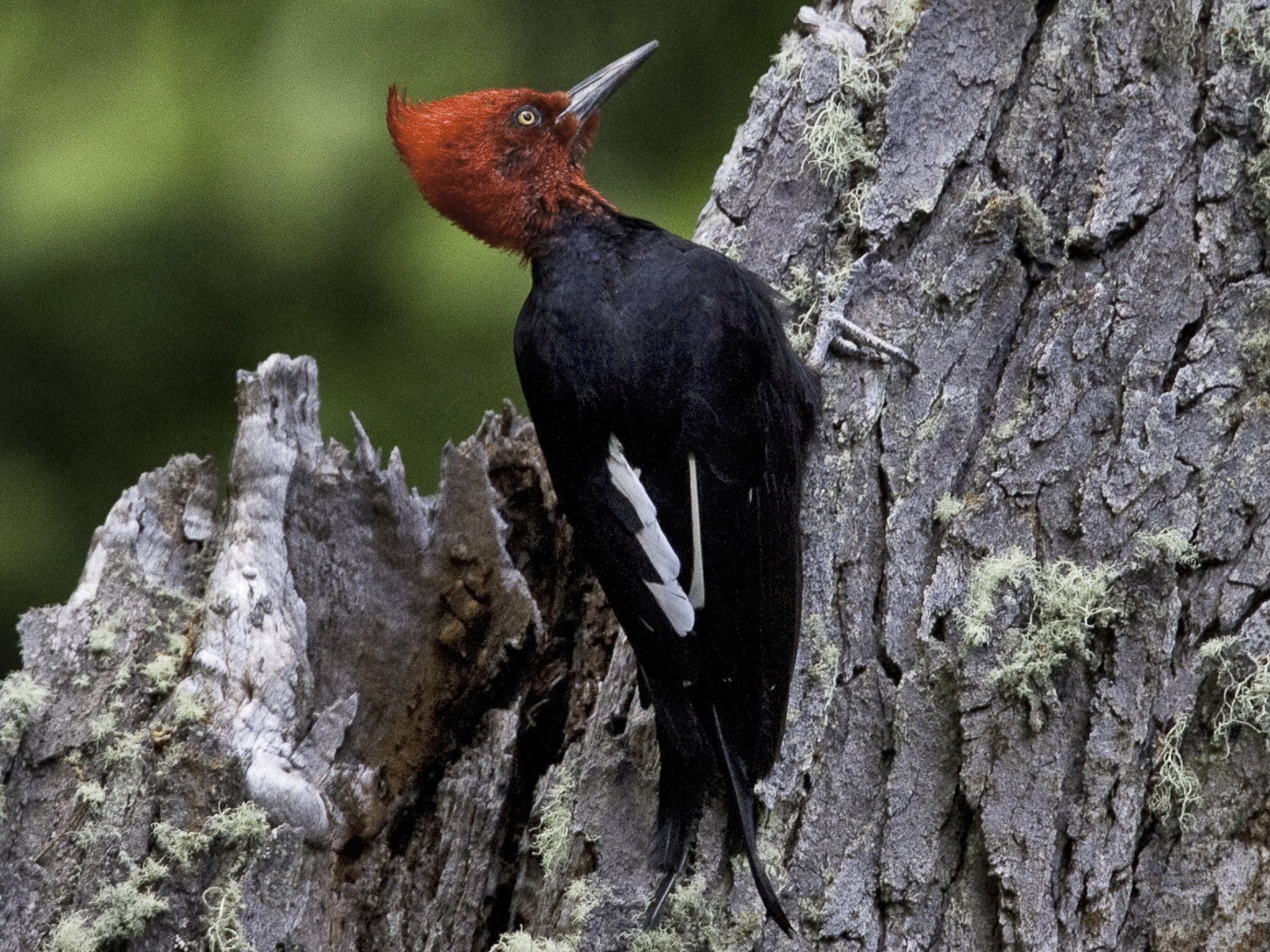 ePostcard #108: Do Woodpeckers Get Hammer Headaches?

Woodpeckers are unique among birds, and indeed in the whole animal kingdom, in producing rhythmic instrumental sounds by drumming their bill on a resonating “sounding board,” such as a patch of bare wood, a hollow branch, or even a sheetmetal roof. There is no denying that woodpeckers are the original drummers, and that these charismatic birds have been tap-tapping their way into the human imagination for millennia, well before there were drums and drumsticks. The woodpecker family has an almost worldwide distribution, absent only from the polar regions, Madagascar, New Guinea, Australia, New Zealand, and small islands remote from continents. In the Western Hemisphere, woodpeckers are distributed from the northern limit of trees in Alaska and Canada to Tierra del Fuego.

South America is home to about 80 species of woodpeckers, of which the most awe-inspiring is undoubtedly the Magellanic woodpecker. This woodpecker, known as “carpintero gigante” in Spanish, is the largest extant woodpecker in the Americas and an endemic resident of the old-growth Patagonian and Magellanic temperate forests of Chile, Argentina and Tierra del Fuego. The male, averaging about 18 inches in length, is easily recognized by its jet-black body, crimson-red hood, and short crest. Elegant in black, the slightly smaller female has only a bit of red around the base of the bill, and a much more flamboyant curl to her black crest. Both sexes have white patches on their flight feathers that are conspicuous in flight. I’ve always loved watching woodpeckers and have long marveled at the diversity of ways in which they communicate in the forested ecosystems where most species live.

Magellanic Woodpeckers make their presence known with a loud, double (and occasionally single) drumming “ta-dap!” that carries for a long distance in the old-growth, lichen-laden temperate forests that they inhabit. The sound is made by both sexes and also by juveniles and subadults, especially when an intruder enters an established territory or when neighboring groups are in close proximity, and sometimes also as a location note for members of a pair. At the beginning of the breeding season, pairs frequently make double knocks as a way of marking their nesting territory. Foraging woodpeckers incessantly tap, hammer, and excavate throughout the day, and observers often first detect these birds by their foraging sounds. [Click on the YouTube video link in the “Photo Credits & Captions” section below – Sir David Attenborough’s BBC series, “The Living Bird.” ]

With all that hammering have you ever wondered if woodpeckers get headaches? I suffered a brain injury a couple years ago as a result of a concussion, and my prolonged recovery got me thinking about the potential of brain injury in woodpeckers as a result of their incessant drumming and hammering. Clearly, the woodpecker has undergone some remarkable evolutionary fine-tuning. The foraging strategy of woodpeckers requires two specialized adaptations: The first is the ability to hammer into wood and throw aside the chips, whether excavating a nest cavity or digging for tasty beetle grubs. The woodpecker’s bill strikes with at least 1,000 times the force of gravity (1,000 g), and it does so in bursts of 10 – 20 pecks at a time, many times a day, yet the bird suffers no apparent harm. Fighter pilots need specially designed g-suits so as not to lose vital biological functions at only a handful of g’s. Pecking apparently puts a lot of force on a woodpecker’s brain. This force is around 10 times greater than what would cause a concussion in humans. In fact, any human who experienced a 100 g impact would surely die. So why don’t woodpeckers damage their brains, or at least get headaches?

A woodpecker’s anatomy is specifically designed to absorb this force and prevent the woodpecker from getting injured. Several anatomical features contribute directly to the woodpecker’s shock-absorbing capabilities: They have a self-sharpening, chisel-like bill that carves into the wood rather than stopping abruptly, and strong neck muscles that get the job done quickly. The woodpecker’s specialized beak and skull direct most of the energy associated with this force into the rest of its body. Woodpeckers have a bony, tongue-supporting structure that starts in its mouth, wraps around its skull, and attaches between the eyes (refer to #4). This is called the hyoid, and it essentially acts like a seatbelt around the brain, absorbing some of the energy from the impact. When a woodpecker strikes a tree, it directs the full force of its bill in a direct straight line, which avoids any rotational or shearing impact on the brain that could result in damage or a concussion. Another protective advantage for the woodpecker is the limited amount of time that its bill is in contact with the tree—just one-half to one millisecond. By comparison, a typical human head injury happens between about three and 15 milliseconds. Finally, the woodpecker has a third inner eyelid which prevents the eyeball from popping out when it pecks.

Researchers at Beihang University, Beijing, China, studied great spotted woodpeckers using high-speed cameras, torque sensors, and scanning electronic microscopy. In parts of the bird’s skull and lower mandible, they discovered micro-modifications in bone structure that allow sliding (deformation) that helps absorb the impact of pecking. They also found that the tissue layer covering the woodpecker’s upper beak was longer than the layer covering the lower beak, while the boney structure of the lower beak was longer than the upper. This mismatch, the scientists believe, allows energy to be directed through the lower beak and away from the brain case.

Woodpeckers have tiny brains—averaging about 0.07 ounce. The bigger the brain, the higher the mass and thus the higher the risk of brain injury. Woodpecker brains are surrounded by a thick, plate-like spongy bone, which helps to absorb and lessen the force of the impact (refer to #5). Impact injuries typically happen when the brain moves around in the skull. A woodpecker’s brain is also packed very tightly inside its skull. This means that there is no space for the brain to move around in the skull and potentially get bruised. When the brain is really small, it has a high surface area to weight ratio. This is another way that helps spread the impact force over a much larger area, causing less damage. This is not what happens in the human brain. Since our brains are larger, when we receive an impact force it causes damage to that specific area of the brain, which was the situation in my concussion.

So do woodpeckers ever get hurt? When it comes to getting hit or impacted, woodpeckers are just as vulnerable as other birds. For example, woodpeckers are just as likely to get injured or killed from flying headfirst into a window as other birds are. Also, thanks to recent research, scientists can’t be totally sure that woodpeckers don’t suffer any brain damage at all. According to a study published in 2018, woodpecker brains can contain a protein called tau. In human brains, tau is associated with brain damage. Scientists don’t fully understand how this protein works in human or bird brains. But this finding is a good reminder of how, in science, every new discovery prompts new questions. More and more, engineers are turning to nature for “bio-inspired” solutions (a field called “biomimicry”), and what scientists are learning about the biophysical characteristics of woodpecker heads shows promise in designing better helmets for humans to prevent head injuries.

Many of you, as I did, probably watched Sir David Attenborough’s BBC series, “The Living Bird,” in the late 1990’s. Each of the 10 episodes in the series illuminated the private lives of birds in unique ways that set a high bar for nature programming in the decades since. One of those episodes included Magellanic woodpeckers and in this segment from his 1998 series, Attenborough summons a male Magellanic Woodpecker by mimicking it’s signature double knock on a tree in Patagonia. Video link: https://youtu.be/MNmh5w6cj78 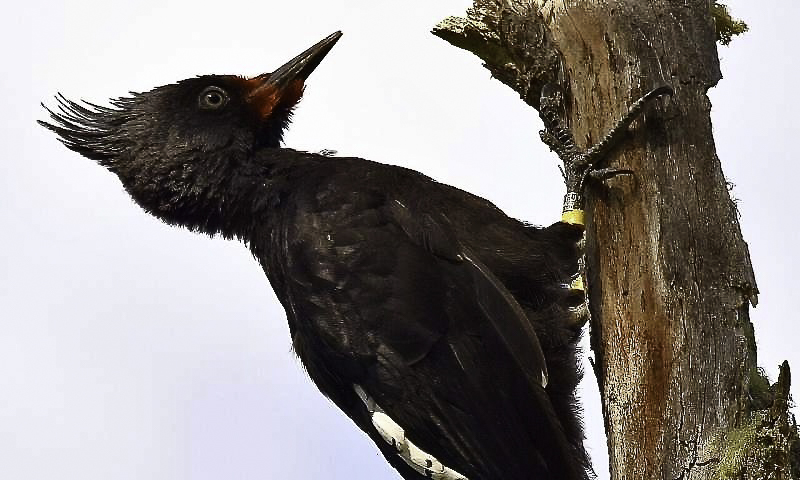 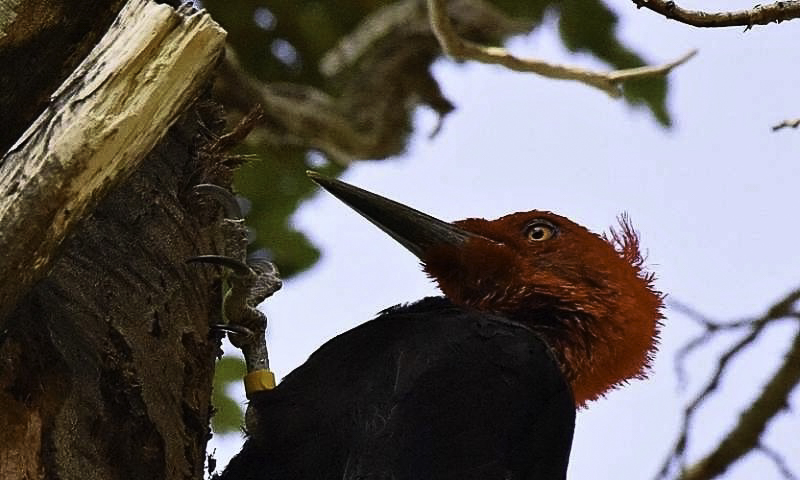 #2. (female) & #3. (male). Photo Credits: Both photographs, of a banded male and female, are by Amy Wynia, a Doctoral student in Biological Sciences at University of North Texas under Dr. Jaime E. Jiménez, Sub-Antarctic Biocultural Conservation Program, Department of Biological Sciences and Dept. of Philosophy and Religion Studies, University of North Texas. 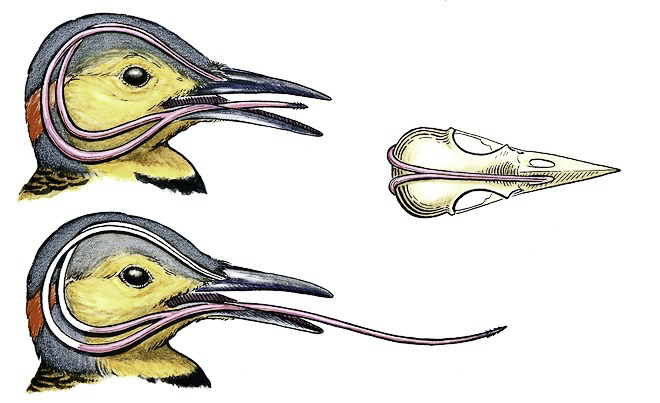 #4. Illustration Credit: Denise Takahashi. Caption: This illustration shows how the curving complex of cartilage and bone within a Great Spotted woodpecker’s head permits the bird to extend and store its exceptionally long tongue. A woodpecker’s tongue can be up to 3 times the length of its beak! This helps them reach insects within trees or holes. 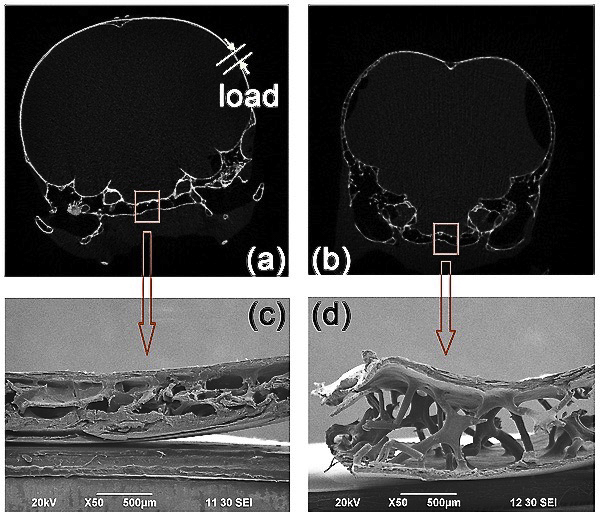