In the mountains where I live in Colorado, one of my favorite springtime traditions was visiting an elegant ponderosa pine snag on the ridge above my home, where generations of woodpeckers and flickers had excavated multiple nesting holes. Over the years, these holes had become “community housing” for several species of cavity-nesting birds. Decades of observations, which ended when this venerable snag lost its top in a windstorm, revealed that these cavities were “rented” by a changing cast of characters—northern pygmy-owls, mountain bluebirds, tree swallows, house wrens, red-breasted nuthatches, and several other secondary cavity-nesting species. Some years as many as three of the snag’s cavities were occupied at the same time by different species. Just a few years ago, as the winter sun was setting, I was fortunate to see at least a dozen pygmy nuthatches disappearing into the snag’s remaining cavity, which I presumed was now serving as a communal night roost for these diminutive birds. Snags like this are in high demand and provide essential habitat for approximately one quarter of all breeding birds in the western coniferous forests of North America.

I can only imagine what it might be like to watch a Magellanic woodpecker excavating its cavity nest, with its sturdy tail feathers fanned out against the trunk to provide support and its head a blur as the bill hammers away, wood chips flying in all directions. When the builder is finished, the cavity hole’s horizontal entrance is just large enough for an adult woodpecker to enter and leads to an interior chamber with a platform nest for rearing young or for night roosting. The Magellanic and Patagonian temperate forests of southern Chile and adjacent Argentina are home to a unique fauna that includes several endemic animal species, including the Magellanic woodpecker, rufous-legged owl, and the tiny arboreal marsupial, monito del monte. As primary cavity-nesters, the lives of Magellanic woodpeckers revolve around old-growth southern beech (Nothofagus spp.) forests, which provide an abundance of snags and mature trees in the early stages of tissue decay and heart rot. Natural cavities develop over time from fungal decay and wood-boring insects, as well as by physical damage caused by fire and wind. Heart rot may sound dire, but this fungus-born disease generally does not kill the tree. Heart rot leaves the sapwood (conductive tissue) alive, effectively shielding the cavity nest from the elements, much like weather-proof siding on a house. I have often observed woodpeckers and flickers tap-tap-tapping on trees and flaking off bark as they prospect for patches of rot-weakened wood, either for easier access to wood-boring insects or for potential natural cavities that give the excavators a head start in hole construction.

In addition to nesting habitat, snags provide an abundant source of insect food for both primary and secondary cavity nesters. Although Magellanic woodpeckers are mainly insectivorous, preying chiefly on the larvae of wood-boring insects, they also consume fruits, phloem sap, and even small vertebrates such as small mammals, lizards, and the eggs and nestlings of smaller birds. In Tierra del Fuego, Magellanic woodpeckers often create a grid-lke patch of phloem sap-wells by pecking into the succulent cambium of young Nothofagus trees (especially N. betuloides). These sap wells are often conveniently situated close to their nest sites, and at least three other bird species take advantage of these sap wells, including austral parakeets, Patagonian sierra-finches and white-crested elaenias. The abundance of these species observed in areas with sap wells suggests yet another example of the many ways in which the Magellanic woodpecker’s role as a keystone species provides essential “ecosystem services” for forest-dwelling animals.

The subantarctic Magallanic evergreen rainforest ecoregion, which runs along the Chilean Pacific Coast from Golfo de Penas (48º S) to Cape Horn (56º S), has been identified as one of the 37 most pristine areas in the world. Omora Ethnobotanical Park is located on Navarino Island in Chilean Tierra del Fuego, in the vibrant heart of the Cape Horn Biosphere Reserve. The Omora research center attracts scientists from all over the world and specializes in providing longterm research opportunities focused on biodiversity, conservation biology and climate change. The park provides a network of trails through forests of southern beech, including lenga, nirre, and coihue trees.

Magellanic woodpecker researchers Dr. Jaime Jiménez, Dr. Amy Wynia  and their colleagues from the Sub-Antarctic Biocultural Conservation Program at the University of North Texas are using radio-telemetry to study Magellanic woodpecker home ranges, foraging behaviors and habitat preferences in these southernmost outposts of Magellanic temperate rainforest. Among many fascinating discoveries, the researchers observed increased woodpecker dependance on decaying and dead trees in areas impacted by expanding populations of introduced American beavers. Preliminary evidence suggests that beaver-built impoundments, while destroying large tracts of old-growth beech forest, may also be creating high-quality woodpecker foraging habitat (=more insect prey) and increasing the number of trees suitable for nest cavity excavation. In Tierra del Fuego, the researchers view forest fragmentation by humans and beavers and the predation threat posed by the introduced North American mink as the major challenges to conservation efforts to protect a species already at risk.

The Magellanic woodpecker is now considered Endangered or Vulnerable throughout its distributional range, a classification resulting from substantial losses in old-growth forest habitat and ongoing forest fragmentation. The life histories of secondary cavity-nesters, such as the rufous-legged owl, austral pygmy-owl, austral parakeet, Chilean swallow, at least 20 species of small cavity-nesting birds, several bat species, and monito del monte, are complexly interwoven with those of primary cavity nesters such as the Magellanic woodpecker and Chilean flicker. The photos I’ve provided below give you an introduction to just a few of these fascinating cavity nesters. In our rapidly changing world, the role of the Magellanic woodpecker as an ecosystem sentinel is undeniable—silencing their voices by failing in our conservation efforts is not an option.

More credits below in captions: 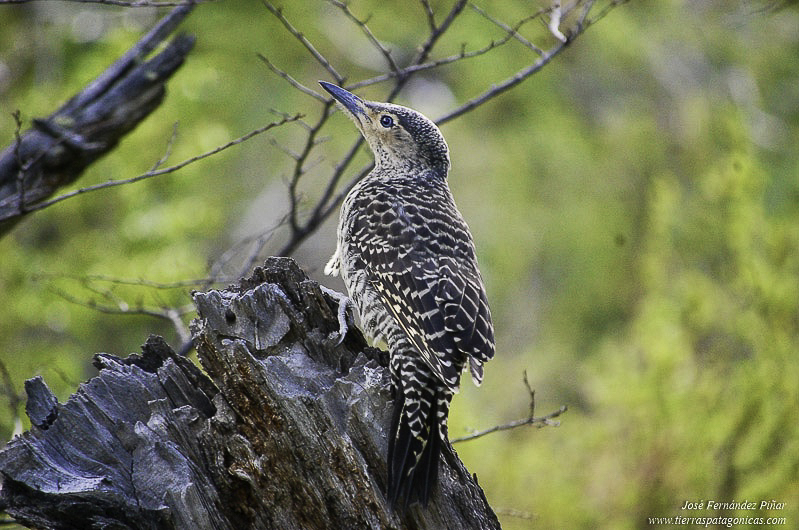 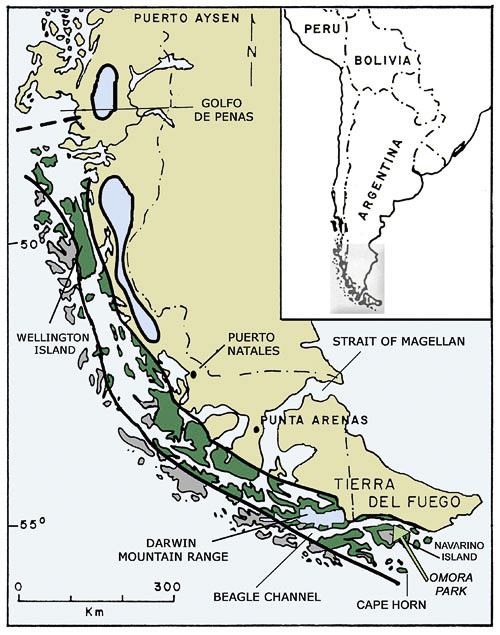 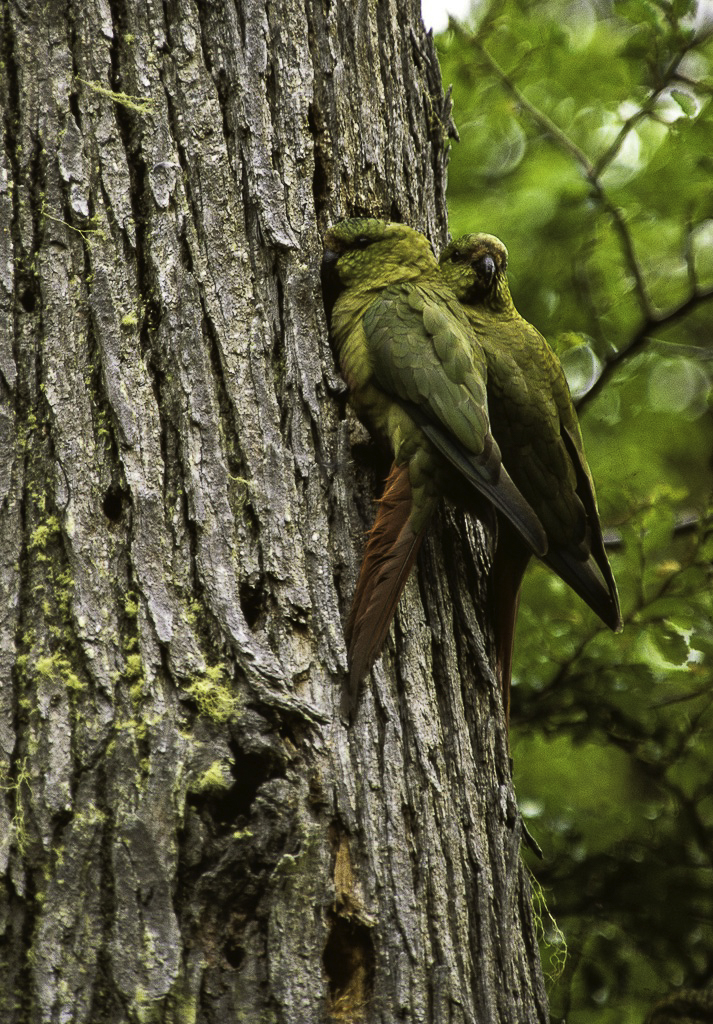 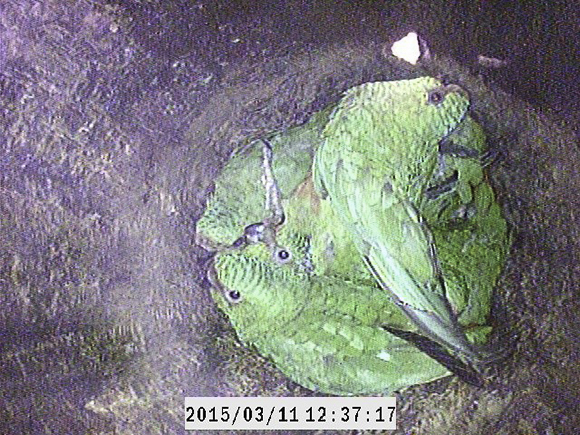 #7.  Photo Credit: Courtesy of Dr. Amy Wynia (University of North Texas). Careful and creative use of a tiny research camera, allowed Dr. Wynia to photograph this active cavity nest and its austral parakeet occupants on her research area on Navarino Island in Chilean Tierra del Fuego. 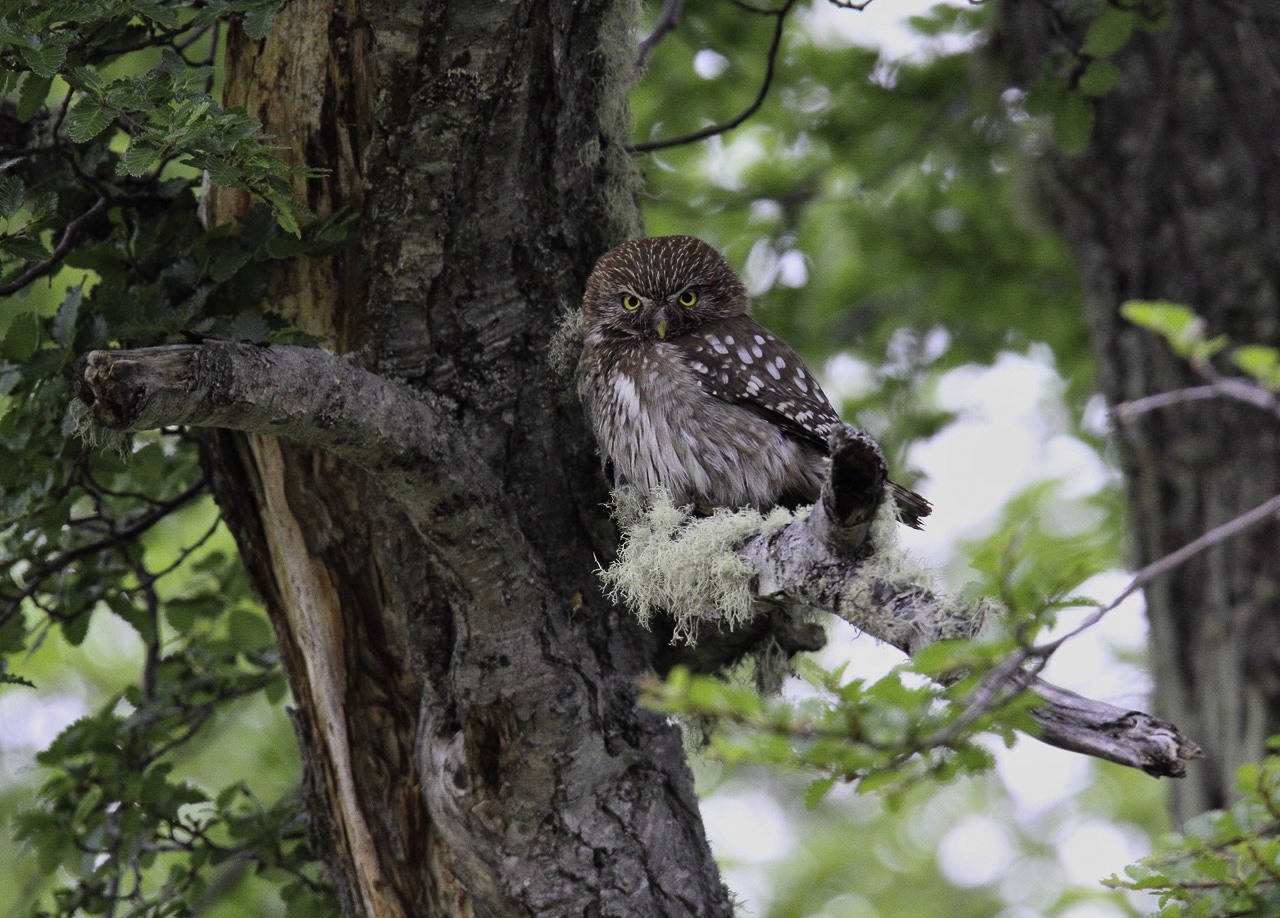 #8. Photo Credit: Austral pygmy-owl photo courtesy of the Raptor Research Foundation. Caption: Austral pygmy-owls are secondary cavity-nesters in holes created by both Magellanic woodpeckers and Chilean flickers. The researchers in the study referenced below used remote cameras to observe the hunting behavior and preferred prey of these small owls, discovering that they frequently entered cavities in use by other species in an attempt to prey on the occupants to feed their own young. Cavity-nesting birds often have lower nest-predation rates than birds that construct open cup nests. Interestingly, in this study, pygmy-owl attempts to prey on cavity nests of songbirds were mostly unsuccessful, illustrating the relative security of cavities. Source: Tree–cavity Nesting of Austral Pygmy–Owls (Glaucidium nana) in Andean Temperate Forests of Southern Chile. Author(s): José Tomás Ibarra Tomás A. Altamirano Kathy Martin F. Hernán Vargas Cristián Bonacic. Journal of Raptor Research, 48(1):82-85. 2014. URL: http://www.bioone.org/doi/full/10.3356/JRR-13-00037.1 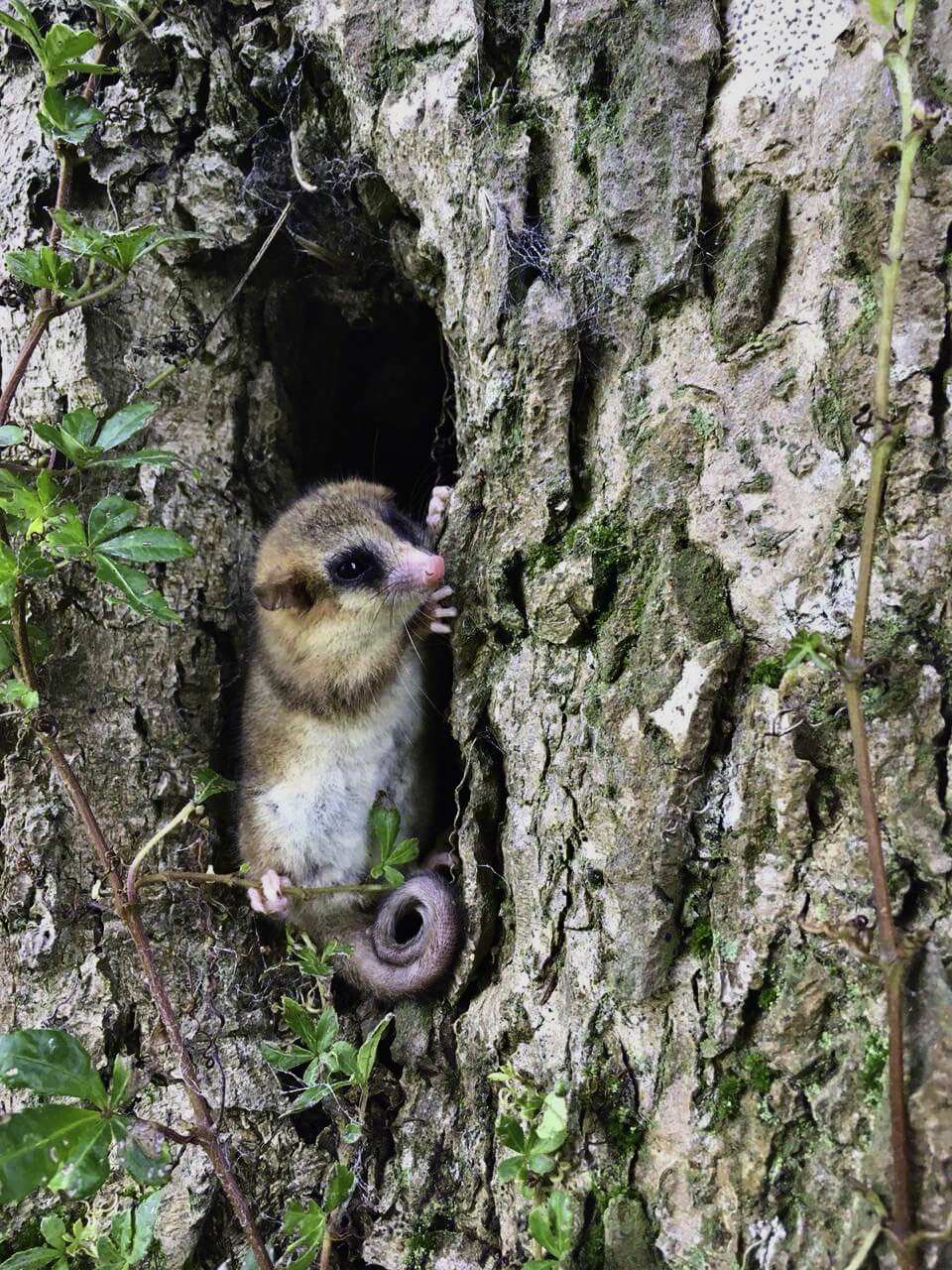 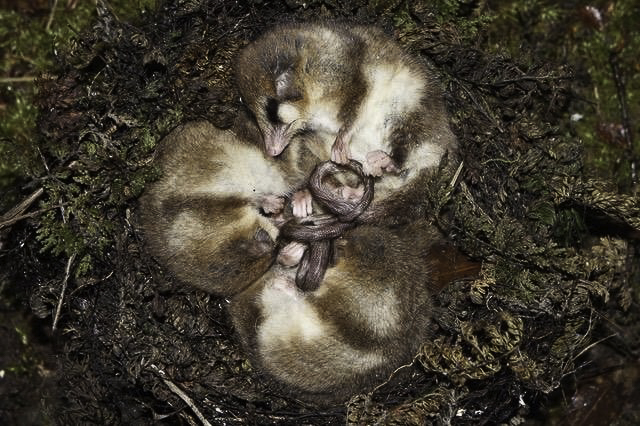 #9 & #10. Photo Credit: Courtesy of photographer Andres Charrier. Caption: The monito del monte, or ‘monkey of the mountain’, is a small South American marsupial and is the only extant species  (a ‘living fossil’) in the order Microbiotherial. This mouse-like marsupial is nocturnal and is found in dense, humid forests in southern Chile and in mountainous areas of Argentina. The 2nd photo shows a group of monitos in a cavity-nest. Source: Ecological Society of America (AAAS and EurekAlert!) at https://www.esa.org/esa/south-american-marsupials-discovered-to-reach-new-heights.