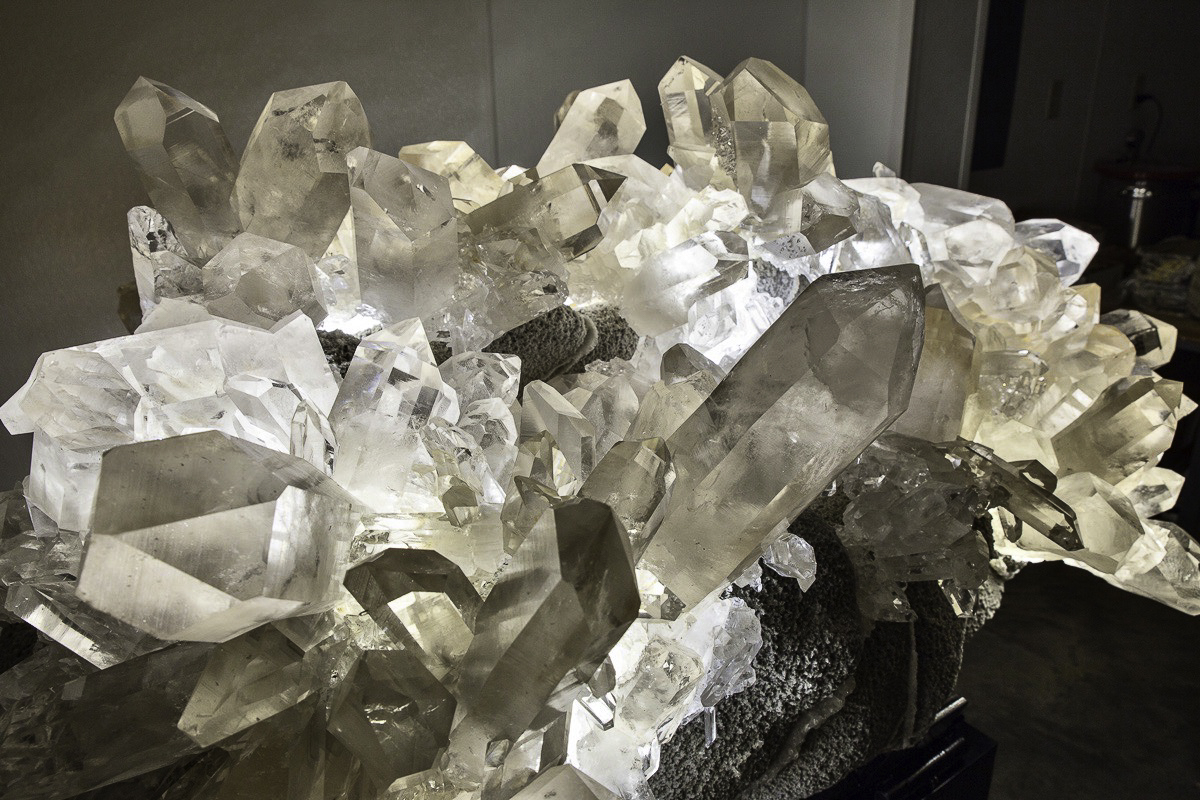 Photo Credit: Courtesy of Brandon Markin, James Zigras and Avant Mining (Blue Springs, Arkansas). The “Bouquet” quartz cluster photographed here is displayed at Avant Mining, which has become the largest quartz crystal mining company in the world, with over 11,400 acres of land and 20 crystal mines in Arkansas.

Twelve different crystal modifications of silica are known, the most common being quartz. It is the second most abundant mineral in the Earth’s continental crust, and it is a major constituent of sand globally and rocks such as granite and sandstone. Quartz also occurs in a pure form (without impurities) as a clear, colorless rock crystal, as you can see in the photo of the Arkansas “Bouquet” quartz crystal cluster. Most examples of quartz are clear, frosted, or found as milky-white grains of small size that don’t display crystal faces. The colored quartz crystals that you may be familiar with as semi-precious stones used in jewelry include rose quartz, smoky quartz, amethyst, and citrine, all of which owe their colors to various impurities, such as titanium, iron, manganese or microscopic inclusions of other minerals. Examples of poorly crystalline (mostly opaque) but beautiful forms of quartz include chalcedony, carnelian, agate, onyx, jasper, and flint.

The clarity and form of Arkansas quartz crystals puts them in a league of their own, unrivaled in the United States and comparable to spectacular finds in Brazil. These extraordinary crystals were formed about 300 million years ago from dissolved silica that poured into fissures created by the folding of the crustal plates that created the Ouachita Mountains. Tens of millions of years later the mountains were eroded enough to reveal their treasure trove of quartz crystals. The DNA “fingerprint” of the crystals — the subatomic pattern of pure silicon dioxide — can be seen in their outward form. The most dramatic concentrations of quartz crystals in Arkansas are found in the radiating folds that trace a jagged oval surrounding Lake Ouachita.

Photo Credits: Herkimer diamond photos (above and below) are courtesy of the Herkimer Mining Museum. 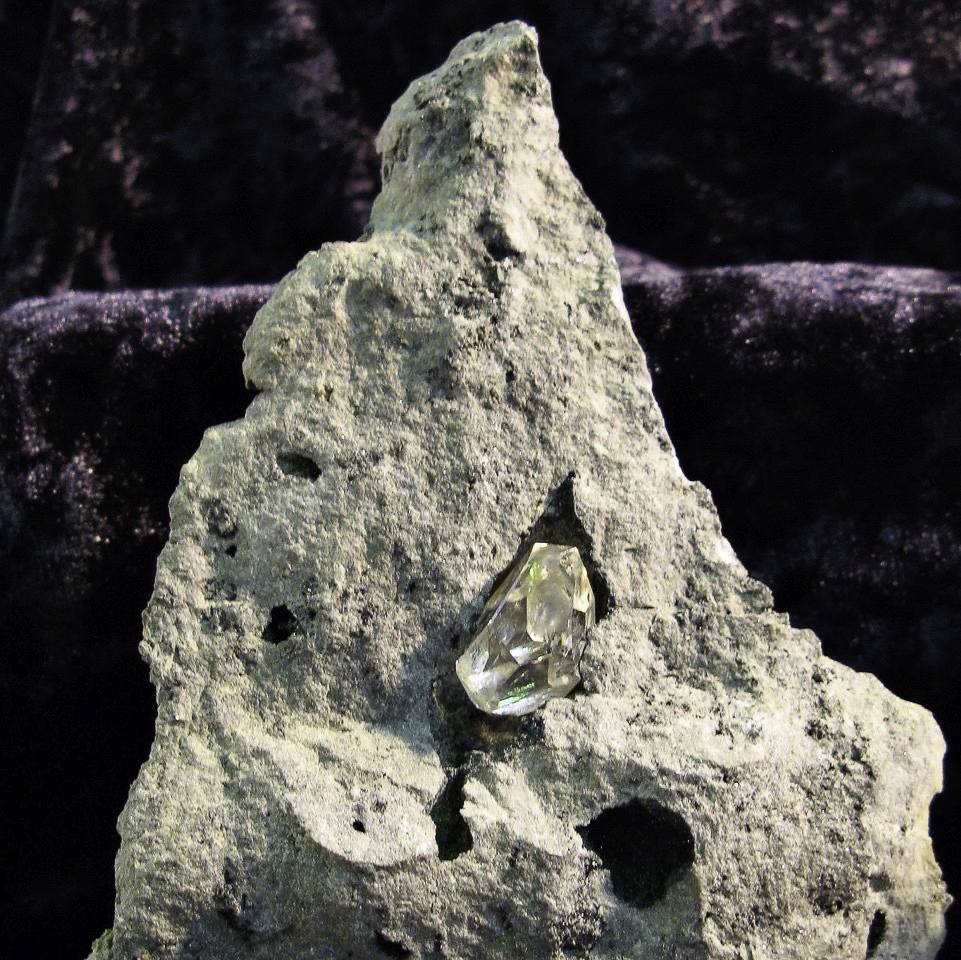 When I was growing up, hunting for “Herkimer Diamonds” in the Mohawk River Valley was a special treat and a unique way to learn about geology. The moniker “Herkimer” refers to New York’s Herkimer County, where these unusual crystals were first “discovered” in the late 18th century by miners quarrying a sedimentary bedrock outcrop (dolomite) for use as a building stone. Although indigenous people and early settlers were well aware of these beautiful semi-precious gems, their formal discovery set the stage for a thriving tourist industry, a fine museum, and attracted both professional and amateur geologists.

Despite their beauty and superficial resemblance to diamonds, “Herkimer Diamonds” are not true diamonds. In contrast to the Herkimers, which are silica quartz crystals, the crystallography of most diamonds consists solely of carbon atoms (no silica). Carbon (C) is the fourth most abundant element in the universe after hydrogen, helium, and oxygen. Most diamonds (except for those that result from the scorching heat of an asteroid impacting Earth), require super-high temperatures (2,000+ degrees F) and pressures that are found only deep within the Earth’s mantle, at least 90 miles or more below the surface.

Herkimer diamonds are similar to other types of quartz in having a hexagonal crystal shape (six sides), but their crystallography is unique because each crystal is pointed at both ends. Double-pointed quartz crystals have been found in a few other locations in the world, including Arizona, Afghanistan, Norway, Ukraine, and China, but only those found in Herkimer County can be called “Herkimers.” These crystals are very rare in nature and are sought by mineral and crystal collectors, and are often faceted for use in jewelry and as collector gems.

The geologic history of Herkimer diamonds begins about 500 million years ago, with the erosion of the ancestral Adirondack Mountains and thousands of feet of eroded sediments being deposited in the Cambrian-age sea. As the sediments accumulated, they compacted and lithified to form a dolomitic limestone, a sedimentary rock made up of calcium magnesium carbonate (CaMg(CO₃). The specific dolomite that hosts the Herkimer diamonds is known as the Little Falls Formation. Geologists believe that the porous dolomite was infiltrated by water at least twice: once by salt water, which created cavities in the rock (called vugs), and later by silica-rich liquid, possibly from the erosion of the rising Adirondacks to the north and Appalachians to the south. The silica in the vugs accreted into quartz crystals because they had little to no contact with the cavity walls of the host rock, which accounts for the point at either end. Herkimer diamonds are completely formed at both ends, lying loose in their pockets, waiting to be found!