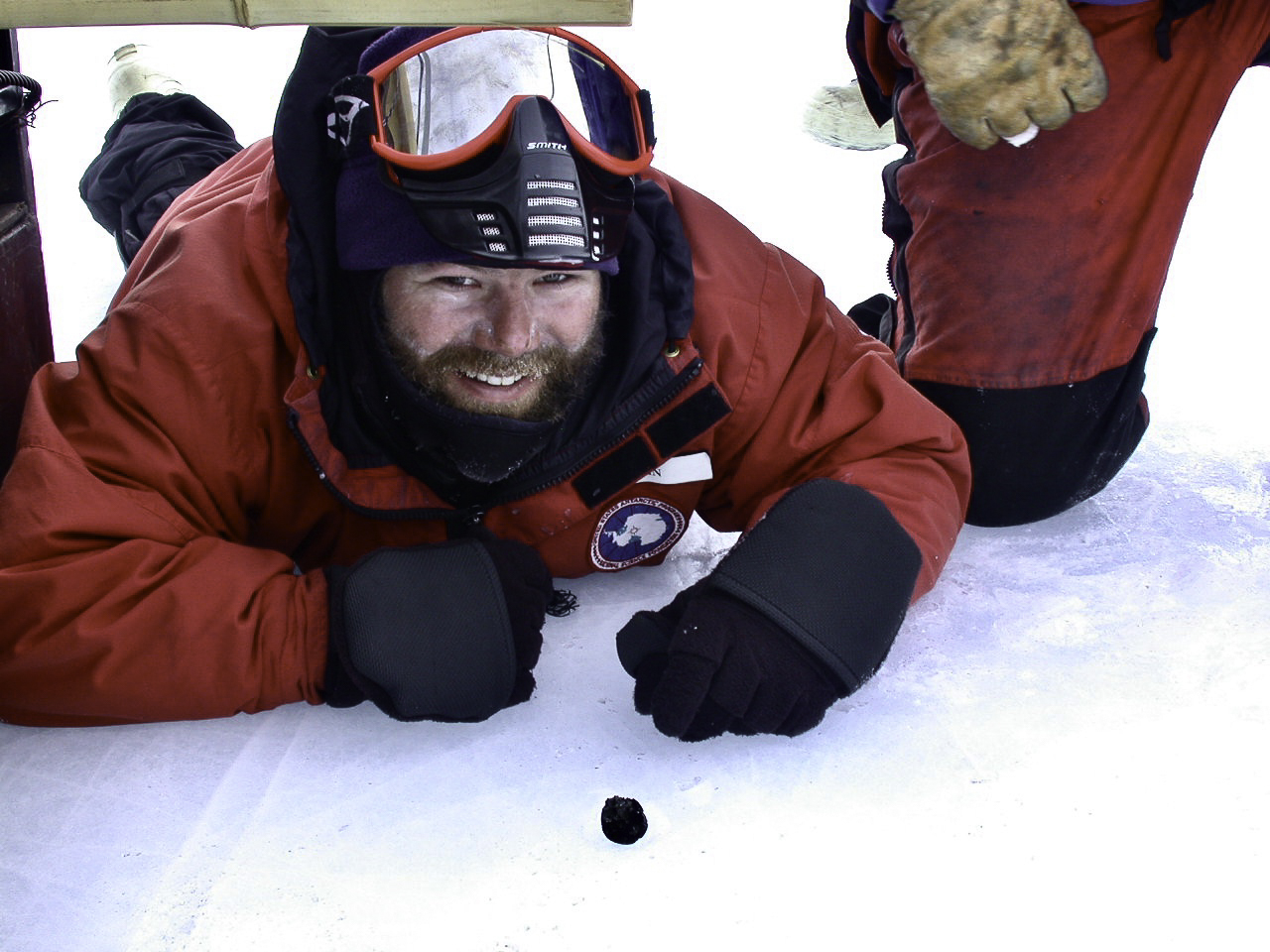 NASA Goddard astrobiologist Daniel Glavin poses in 2002 next to a meteorite he had just found during an expedition in Antarctica.

During a 2012 expedition to Antarctica, a team of Japanese and Belgian researchers picked up a small rock that appeared coal black against the icy snow. Now known as meteorite Asuka 12236, it was roughly the size of a golf ball. Despite its modest size, this space rock was a colossal find. As it turns out, Asuka 12236 is one of the best-preserved carbon-rich meteorites ever discovered. The Antarctic-based setting of its recovery means that the meteorite has undergone minimal parent-body alteration (contamination by water, thermal metamorphism etc.), a bonus that provides scientists with a largely unmodified sample of presolar and nebular materials. And now, astrobiologist Daniel Glavin and his colleagues at NASA’s Goddard Space Flight Center have shown that Asuka contains microscopic clues that could help them solve a universal mystery: How did the building blocks of life flourish on Earth?

Meteorites like Asuka 12236 are pieces of much larger asteroids. These fragments were flung into the solar system during asteroid collisions more than 4.5 billion years ago, ultimately making their way to Earth’s surface after surviving a fiery descent through our atmosphere. On the timeline of the solar system, Asuka 12236 is situated at the very beginning – in fact, some scientists think that tiny pieces of the meteorite predate the solar system, and might provide a record of the earliest planet formation processes. 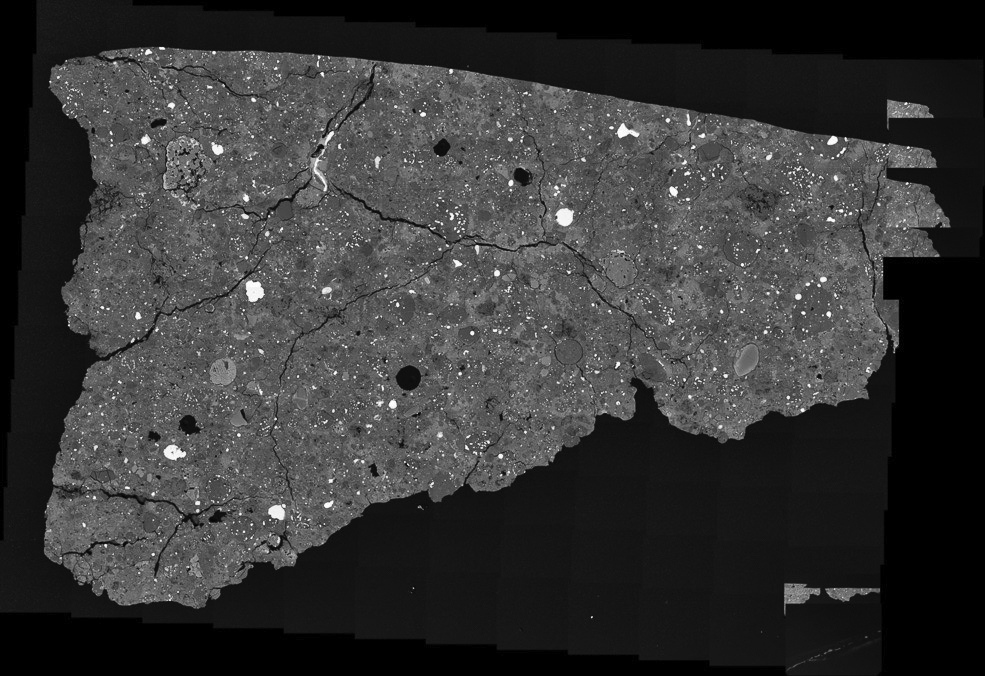 The Asuka (A)-12236 meteorite has recently been classified as a CM carbonaceous chondrite of petrologic type 3.0/2.9 and is among the most primitive CM meteorites studied to date. The image above is of a polished thin section of Asuka 12236, and was made made with a scanning electron microscope. The section is about a third of an inch, or about 1 centimeter, across. Most of the bright grains in the image are iron-nickel-metal and/or iron-sulfide. The grey is mostly silicate, with the darker grey areas more magnesium-rich, while the lighter grey areas are more iron-rich. The roundish objects, and some fragments of them, contain most of the small, bright metal grains called “chondrules,” which formed as molten droplets. They are set in a very fine-grained matrix, which is where the organic compounds and pre-solar system age grains are found.

With Asuka 12236, scientists are getting a peek at the very first amino acids produced in the solar system and the conditions that led to the variety and complexity of these molecules. The Goddard researchers found that an abundance of amino acids were locked up inside Asuka 12236, double the concentration seen in a space rock called Paris, which was previously thought to be the best-preserved meteorite of the same class. These primordial molecules included aspartic and glutamic acids, which are among the 20 amino acids that form themselves into countless arrangements, making up millions of proteins. Proteins power the chemical gears of life on Earth, including essential bodily functions in animals. The Asuka meteorite also contains an abundance of silicate grains with unusual chemical compositions that indicate they formed in ancient stars that died before the Sun began to form. Since these silicate minerals are typically easily destroyed by water, scientists don’t find them in meteorites less pristine than Asuka 12236.

“It’s fun to think about how these things fall to Earth and happen to be full of all this different chemical information about how the solar system formed, what it formed from, and how the elements built up in the galaxy,” said Conel M. O’D. Alexander, a scientist at the Carnegie Institution for Science in Washington, D.C., who collaborated with Daniel Glavin’s team on the Asuka 12236 analysis, which was published in August 2020 in the journal Meteoritics and Planetary Science. Space rocks are the only source of this information, because erosion and plate tectonics on Earth have wiped away the chemical history of our planet. They are among the most interesting rocks to study for scientists who focus on the origin of life since many contain a highly complex mixture of organic compounds associated with living things. Differences in the types and amounts of amino acids preserved in these rocks allow scientists to build a record of how these molecules evolved through time and circumstances, including exposure to water and heat inside their parent asteroids. Glavin and his team are learning that the key for amino acids, when it comes to forming and multiplying, is exposure to the perfect conditions inside asteroids. “You need some liquid water and heat to produce a variety of amino acids,” he said. “But if you have too much, you can destroy them all.”