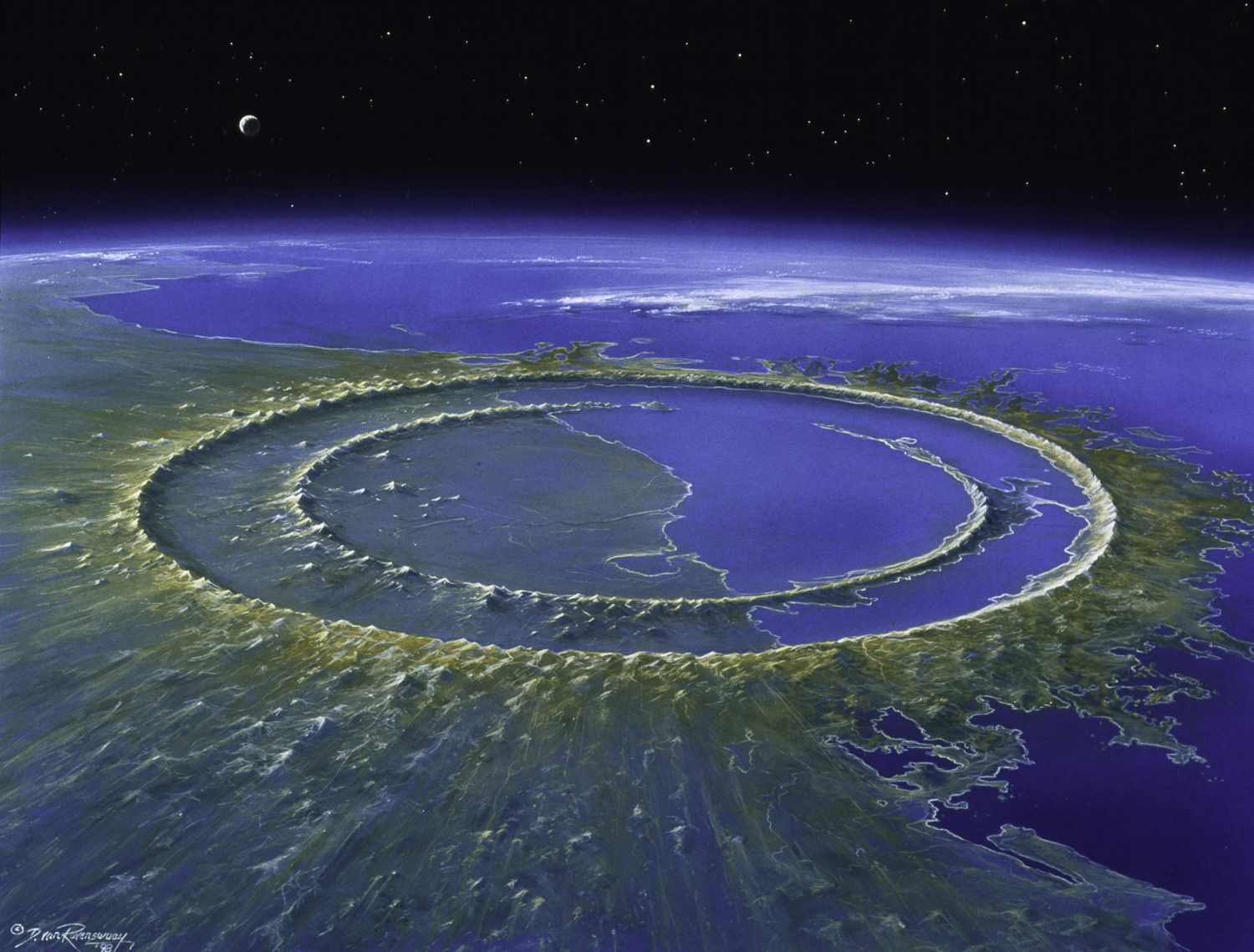 This illustration is an artist’s rendering of the 100-mile-wide asteroid strike scar—Mexico’s Chicxulub Crater—as it might have looked soon after impact.

The meteorites, comets and asteroids that have slammed into Earth have done so with a force many times greater than the most powerful nuclear bombs ever created by humans. There are roughly 180 known impact craters worldwide and fully a third of them—including some of the biggest—are located in North America. In addition to causing tremendous immediate devastation in the impact zone where they land, extraterrestrial collisions of such magnitude are often associated with earthquakes, firestorms, and giant sea waves (tsunamis), and are capable of perturbing Earth’s environment globally by throwing large quantities of fine debris high into the atmosphere. Scientists now know that the climatic consequences of such catastrophic collisions included sudden decreases in the amount of solar energy reaching the Earth’s surface and a sharp decline in surface temperatures—inducing a so-called impact winter—that could lead to significant losses in photosynthesizing plant life and result in widespread starvation and disease.

The Chicxulub Crater (pronounced CHEEK-she-loob), which is located at the northwestern point of Mexico’s Yucatán Peninsula, is perhaps the world’s most famous impact craters and one of the largest ever discovered. In the Mayan language, Chicxulub means “tail of the devil,” an appropriate name for the asteroid impact that forever altered life on Earth about 66 million years ago. The Chicxulub Crater is easily identified on land, even beneath dozens of yards of sediment, and about half of the crater is submerged in the Gulf of Mexico. The buried structure of the crater measures more than 100 miles across and the Yucatán coastline bisects the crater almost horizontally through its center.

In 2016, a team of UK/US-led geophysicists successfully drilled into the Chicxulub impact zone and collected rock samples from the site where this life-changing asteroid struck Earth with the same energy as 100 million atomic bombs. From these rocks, the research team should be better able to understand how the crater formed, the energy involved in its excavation, and the volume of material that was dispersed by the impact. The cloud of dust and carbon gases that resulted from this catastrophic event played a significant role in the mass extinction that followed. 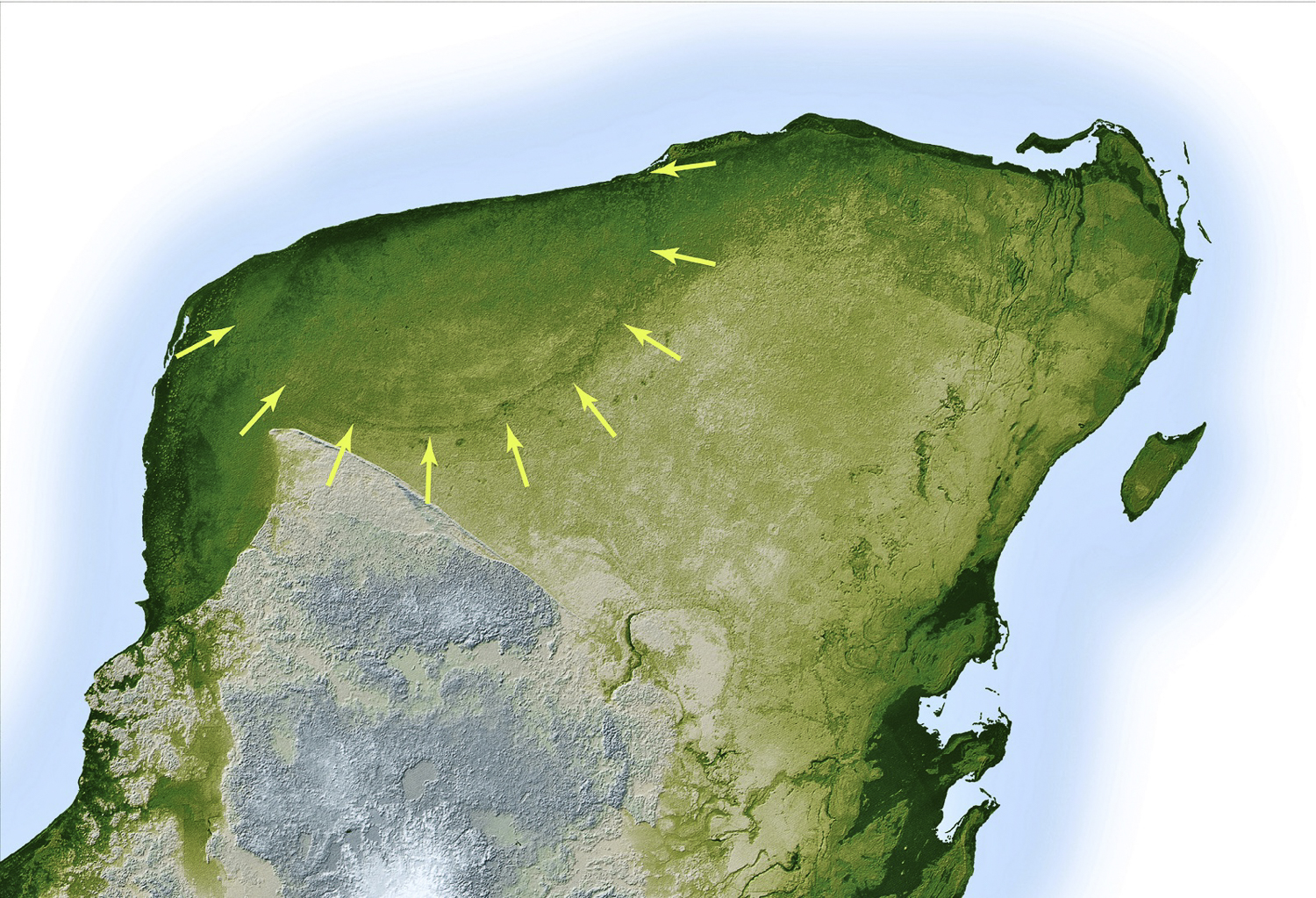 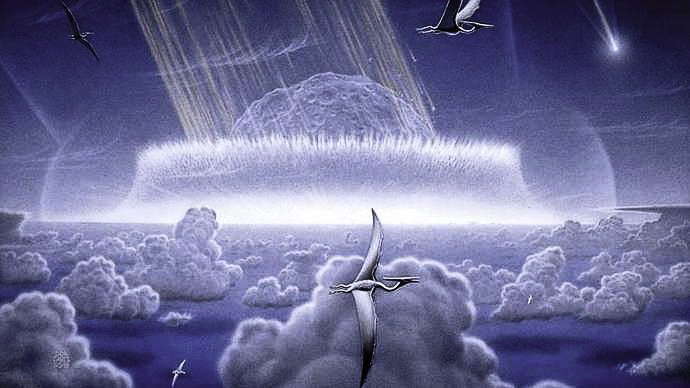 This illustration is an artist’s representation of the giant Chicxulub asteroid slamming into Earth 66 million years ago near what is now Mexico’s Yucatan Peninsula.

The story of the Chicxulub Crater begins about 66 million years ago, when an asteroid or comet measuring between 9 and 18 miles across crashed into the Gulf of Mexico with the explosive violence of 100 million atomic bombs. This catastrophic impact created a fireball that burned at 18,000 degrees Fahrenheit. Even before the molten impact debris rained down from the sky, lighting unquenchable fires across the world, a shockwave of air pulverized plant and animal life within a 1,000-mile radius of the impact site. This devastation was followed by magnitude 10 earthquakes, volcanic eruptions and killer tsunamis up to 1,000 feet tall.

The collision ejected 100 billion tons of sulphate-rich dust into the atmosphere that, along with the smoke from raging fires, blocked out the sun. Global temperatures dropped by 78 degrees Fahrenheit, with up to 16 years of subfreezing temperatures worldwide. Most scientists now believe that the large meteorite that created the Chicxulub Crater triggered not only the demise of the dinosaurs that had ruled the Earth for 135 million years but also the mass extinction of 75 percent of all species on land and in the sea at the end of the Cretaceous Period (about 65 million years ago). Evidence for this theory grows more ironclad over time – yet only 30 years ago it was often thought to be nonsense.