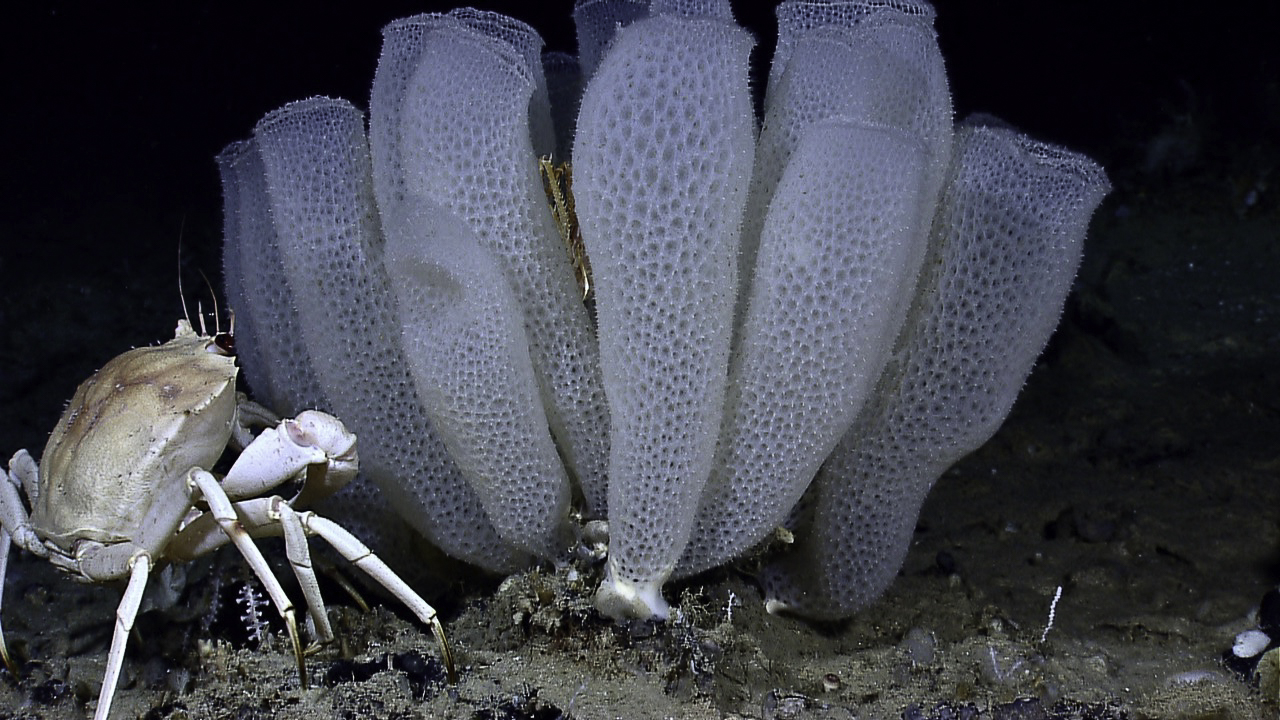 The hunt is on! This golden crab appears to have spotted a smaller golden crab hiding in a spectacular group of Venus flower basket glass sponges. The intended prey might just have found the ideal predator-proof refuge because the Venus flower basket’s sturdy silica skeleton can easily withstand the larger crab’s claw-driven crushing action.

Among the most unusual types of natural glass structures are those produced by biological processes that enable some marine organisms, including certain sea sponges, microscopic algae, and planktonic organisms (diatoms, radiolarians, silicoflagellates etc.), to construct complex silica-rich “houses” by extracting siliceous salts from seawater. Silicon commonly occurs in nature as silicon dioxide (SiO2, or silica) and it cycles through the marine environment, entering the sea primarily through riverine runoff.

Silica is removed from the ocean by organisms such as diatoms and radiolarians that use an amorphous form of silica in their cell walls. After they die, their skeletons settle through the water column, and the silica redissolves. A small number reach the ocean floor, where they either remain, forming a siliceous ooze, or dissolve and are returned to the photic zone by upwelling. Our ePostcard #136: Life in Glass Houses (Part 2) will feature these wondrous plankton.

With no head, eyes, or organs, the sea sponge is an unusual animal—and they are animals, members of the Phylum Porifera (meaning ‘pore-bearing’), and are the oldest of all multi-cellular animals. For those of you unfamiliar with sea sponges, it should be noted that a sponge is not a single animal, but a colony consisting of thousands of cells. Sponges lack true tissues but have many cell types that serve a variety of physiological functions. They are also unique in the animal kingdom because nearly all their cells can change function (called totipotency ) as required. Sponges have flagella, whip-like structures that work to set up water currents so that the sponge can sieve food particles from the water. The water comes in through an inhalant pore and leaves the sponge via an exhalant pore. The other special cells of the sponge include those that filter sea water; cells that are phagocytic (that engulf and digest food particles); those that form the external ‘skin’, breathing pores and tubes through which water enters and leaves the body; and those that secrete the mineral and organic skeletons, called spicules and fibers, respectively.

The history of the sponges in the marine fossil record extends back approximately 750 million years, to the Cambrian. Some of the oddest and most beautiful of the marine sponges are the so-called “glass sponges” or hexactinellids, which have a prominent 6 pronged type of spicule and a “skeletal” structure composed of silica, a component of glass. Hexactinellids, which include about 679 living species, are exclusively marine and are found throughout the world in deep oceans (>3,000 feet). Unlike other filter-feeding poriferans, hexactinellids do not possess the ability to contract and obtain nutrition from direct absorption of dissolved substances and small organic particles in seawater.

In 1841, the English biologist Richard Owen marveled at the intricate skeleton of a new sea sponge species found near the Philippines. It resembled “a delicate cornucopia,” he wrote, one woven from “stiff, glistening, elastic threads, resembling the finest hairs of spun glass.” The sponge skeleton is indeed made of glass, which the animal, Euplectella aspergillum — nicknamed “Venus’ flower basket”— creates using acid extracted from seawater. Scientists still marvel at this sponge 180 years later. Its notable properties include stunning longevity — some glass sponges are thought to live many thousands of years, placing them among the longest-lived animals — and the remarkable ability to channel light through its silica strands in the manner of fiber optics. 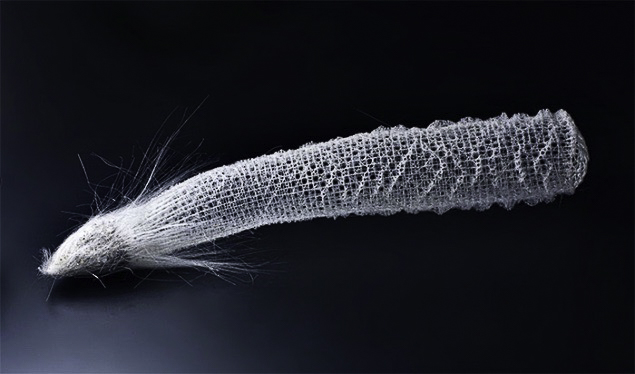 Photo Credits: All courtesy of Michael Monn and physics world.org.

The photo above is of a whole “skeleton” of a Venus flower basket sponge colony. Each colony attaches itself to the sea floor using very strong fibers called spicules, which in this photo are seen rising up from the pointed base of the colony and lying alongside the column. When these sponges are collected by biologists, they are almost always bundled in this manner for shipment; however, in their natural habitat, these long threads serve as an anchor for the colony and extend down into the seafloor. A scientific study focused on the substructure and refractive properties of the Venus flower basket found that the glass sponge’s silica spicules transmit light in a similar way to the optical fibers used in telecommunications. In fact, these silica glass threads are optically superior to any fiber optic we can yet create.

For the last two decades, a group of biologists, materials scientists and engineers at Harvard University have focused on the feature of Venus’ flower basket that attracted Richard Owen: the intricate design of its glass skeleton. The researchers noted that the glass beams that form the skeleton of the Venus’ flower basket have much in common with trusses, the assemblages of beams used to stabilize bridges and skyscrapers. The skeleton of the Venus’ flower basket, however, has pairs of diagonals running in both directions rather than the single diagonals crisscrossing a typical truss. These pairs are spaced apart so the grid looks like a checkerboard, with diagonals crossing every other square. In experiments and computer simulations, a lattice modeled on that of the Venus flower basket was able to withstand significantly more compression than other lattices used in human-engineered construction. Glass sponges have few known predators, which is probably because the sponges possess very little organic tissue; the siliceous skeleton accounts for 90% of the sponge’s body weight.

The Venus flower basket sponge often houses two small, shrimp-like Stenopodidea, a male and a female, who live out their lives inside the sponge. The crustaceans breed, and when their offspring are tiny, they escape to find a new Venus flower basket of their own. The pair inside the basket clean it and, in return, the basket provides food for the crustaceans through its waste. The animals eventually grow too large to escape the sponge. 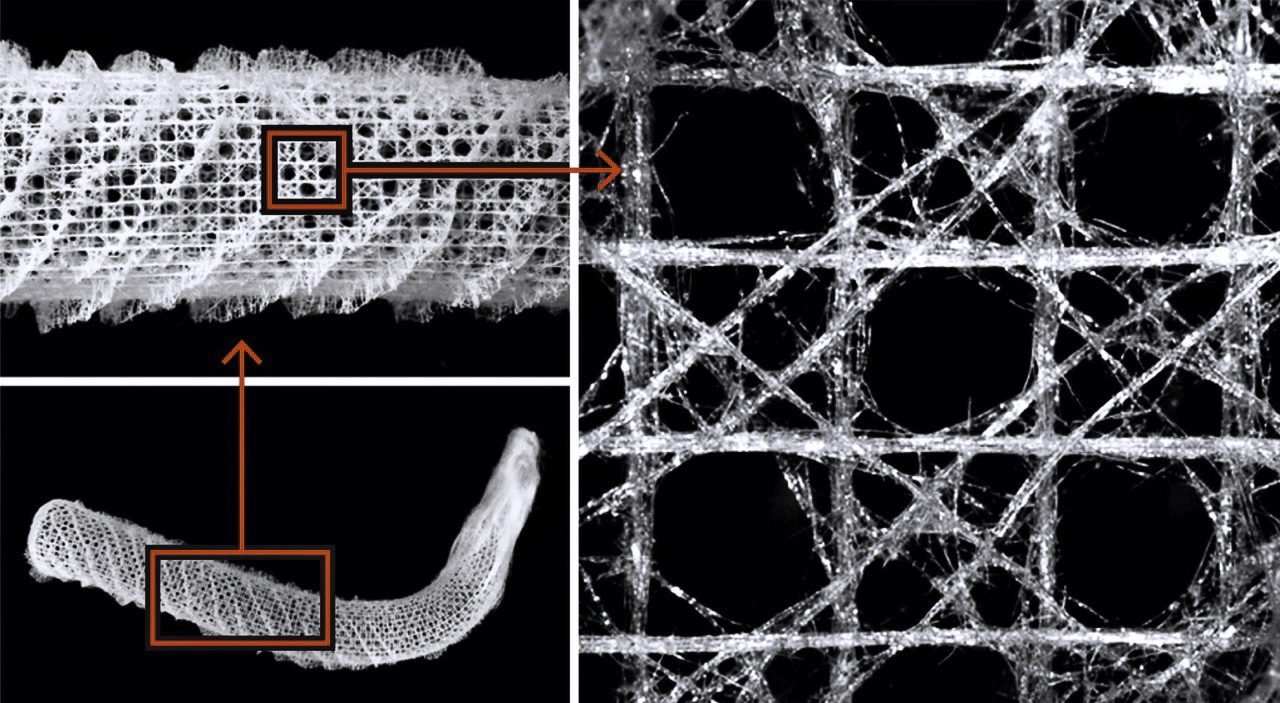 The Hexactinellids, or “glass sponges,” are characterized by a rigid framework of spicules made of silica, and many glass sponge species have holdfasts of spicule mats or rope-like structures, which allow them to inhabit soft muddy substrates of deeper depths. Despite being no thicker than a human hair, each spicule has a remarkable load capacity, and can transmit significant forces from the anchoring barbs to the rest of the sponge’s skeletal structure.

The clever design underlying the remarkable strength of a sea sponge’s anchoring fibers was recently revealed by a team of U.S. scientists, who were able to show that the strength of each fiber is made up of about 25 concentric silica cylinders. The researchers believe that this natural design could be copied to make strong artificial materials for use in larger structures such as buildings and airplanes. This quote from Dr. Pablo Zavattieri, a professor in civil engineering at Purdue University, speaks eloquently to the amazingly biodiverse world that we live in: “The process of trial and error over millions of years of evolution brings out the best in materials and design in the animal world.” 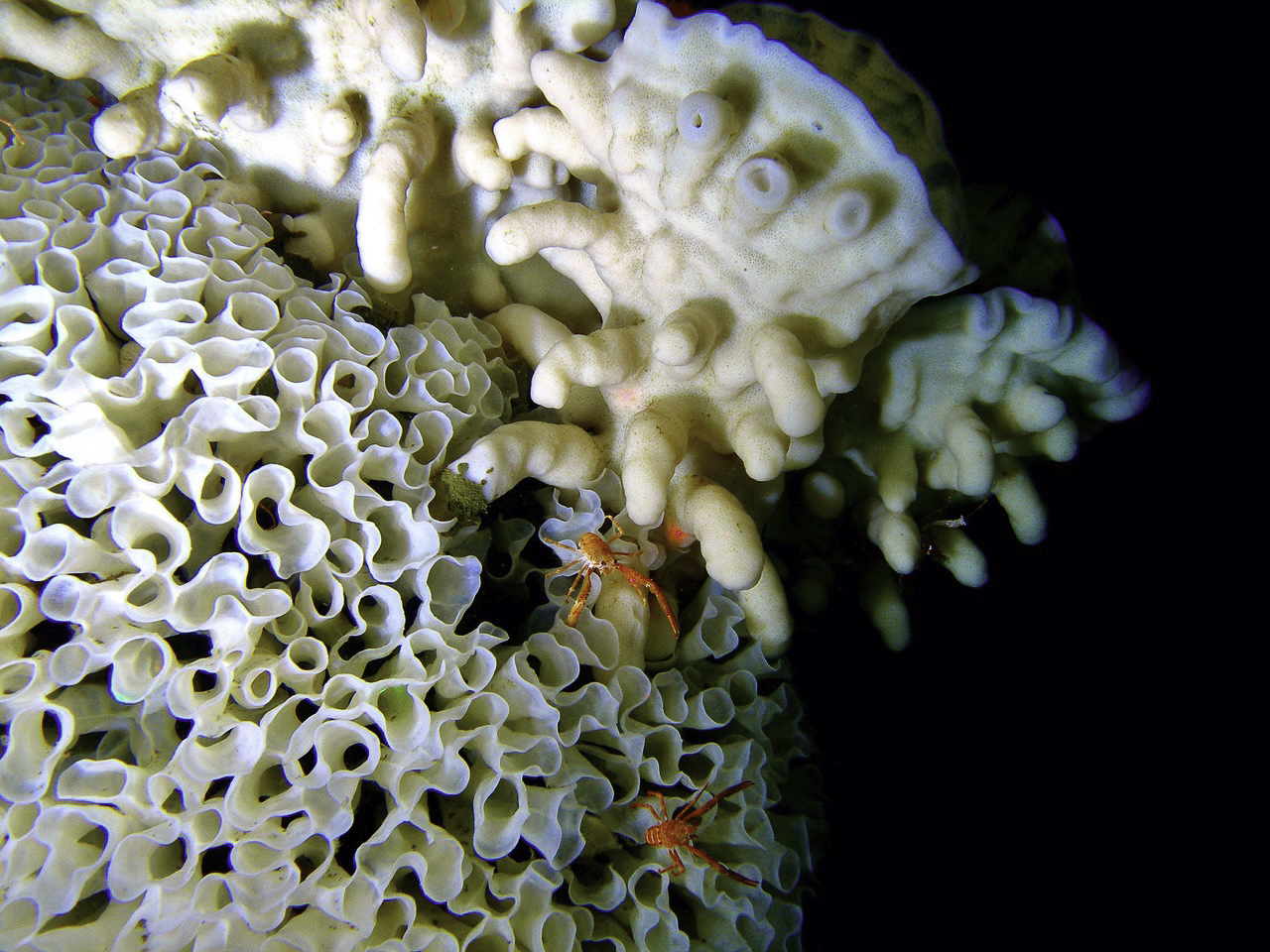 Most glass sponge species live attached to hard surfaces and consume small bacteria and plankton that they filter from the surrounding water. As you see in the photo above their intricate skeletons provide many other animals with a home. The glass sponge reefs in British Columbia are a rare and natural wonder. Previously thought to have gone extinct 40 million years ago, the sponges were rediscovered in B.C. in 1987. Despite their name, glass sponges are not soft! Their structures are fragile and can be broken if handled roughly. When asked to describe the towering ivory-hued glass sponge reefs she’s exploring by submersible within British Columbia’s Hecate Strait, Dr. Sally Leys, a professor of biological sciences at the University of Alberta, replied that she found sea glass sponge reefs to be comparable to underwater old growth forests. The comparison is apt. Much like an old growth forest, the reef is ancient, complex in terms of its ecosystem biodiversity, enigmatic and an area of extreme concern for conservationists.