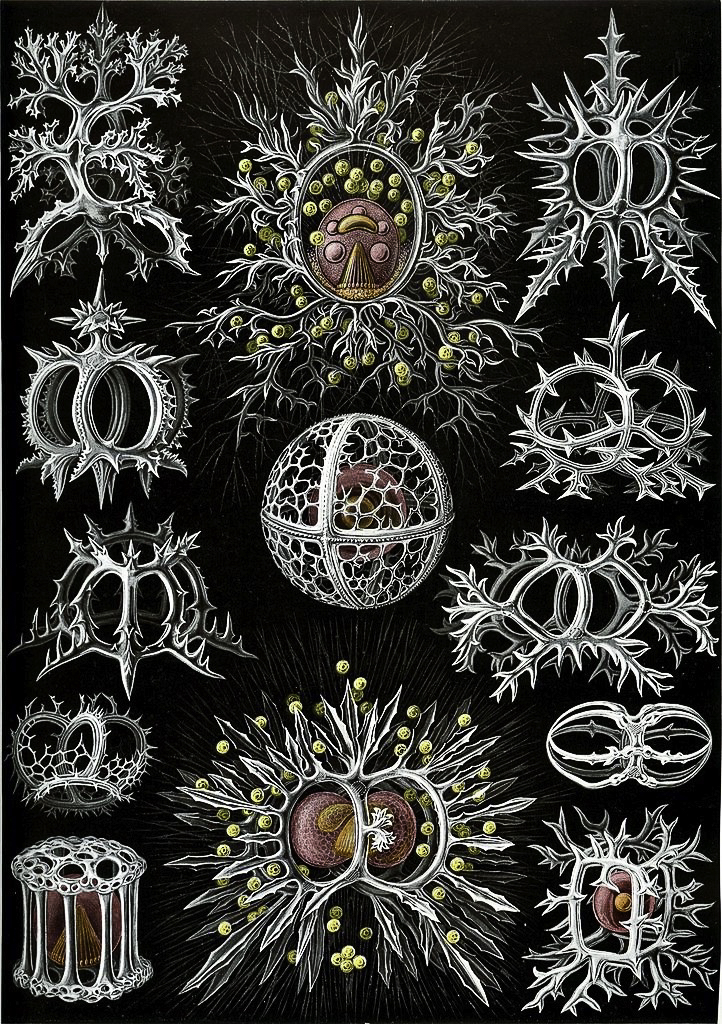 Scientific Illustration Credit: Courtesy of Wikimedia Commons/Public Domain. Ernst Haeckel’s Kunstformen der Natur (1904), plate 71: Drawings by artist and zoologist Ernst Haeckel of the silica exoskeletons of Stephoidea (radiolarians). The individual radiolarian specimens in the plate above, representing just one family, the Cyrtoidea, were identified scientifically to genus and species, and drawn from living animals and mineralized skeletons extracted from marine sediments.

Modern marine sediments and the marine microfossil record include the remains of a remarkable diversity of planktonic and benthos (deep sea) organisms. The microfossils are especially important because they include the exquisitely fossilized “hard parts” of these beautiful unicellular organisms, exoskeletons made of silica (SiO2) or calcium carbonate (CaCO3). Many of these marine plankton species, such as the diatoms (algae) and radiolarians (protozoans), have intricate siliceous (silica) exoskeletons, while other plankton species, which include the foraminifera and the coccoliths, have equally complex shells made of calcium carbonate. The ubiquity and persistence of these organisms in the fossil record over millions of years makes them remarkably useful in studying paleoenvironmental conditions in the ancient oceans.

The zoologist and artist Ernst Haeckel, a contemporary of Charles Darwin and a champion of his evolutionary theory, made exquisitely detailed drawings of unicellular protozoan organisms. Of all of the species Haeckel described, he is most famous for his illustrations of radiolarians. Their name—radiolaria—speaks to the radial symmetry of most species. They are an important part of zooplankton populations throughout the global ocean, and their skeletal remains often cover large portions of the ocean floor as radiolarian ooze. As you can see above, Haeckel’s drawings of radiolarians are precise and detailed, based on living animals and mineralized skeletons, and definitely not the renderings of an overactive imagination. Despite being single-celled protozoans, Radiolaria are complex, sophisticated organisms. He first encountered these beauties while at Messina in Sicily, and it was this experience that prompted him to pursue doctorate studies in zoology. Haeckel helped popularize these animals through his 1862 monograph Die Radiolarien, his 1887 report as part of the H.M.S. Challenger expedition, and his illustrations in Kunstformen der Natur. 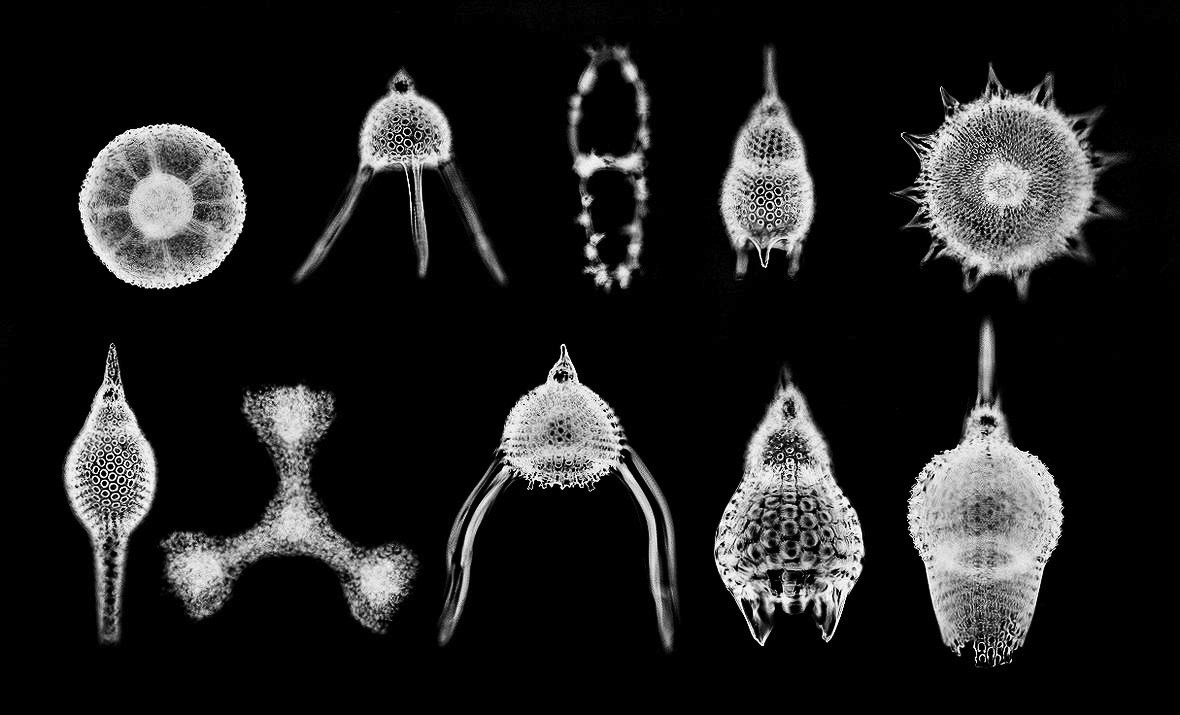 Radiolarians have been part of marine plankton populations since the earliest Cambrian, and possibly the late Precambrian. Along with the siliceous glass sponges described in ePostcard #135, they would have played a significant role in the silica cycle of the ancient oceans. The multiple body compartments of a radiolarian are surrounded by an elaborate mineralized exoskeleton (called a test), which is what so captivated zoologist Ernst Haeckel. Their exoskeletons consist mostly of silica (SiO2) and are unique to each species, which makes them important diagnostic microfossils because they allow scientists to identify strata and to correlate strata at different sites as they work—fossil by fossil—to reveal the history of life on Earth.

The exoskeleton is generally organized around spicules, or spines, which extend from the main skeletal mass. The fusion of many of these spines forms the outermost exoskeleton, or test. Connecting the exoskeleton to the many concentrically organized inner portion of the test are bars or “beams,” which strengthen and support the structure. Inside the exoskeleton there is a central capsule, which divides the radiolarian cell into inner (endoplasm) and outer (ectoplasm) portions. Look at the two photos below and marvel at the exquisite glass models (manmade) of two radiolarian species created in the 19th century by glass artists Leopold and Rudolf Blaschka

Photo Credit: Courtesy of The Natural History Museum at South Kensington (UK) and the Paleontology Collections. This glass model of the radiolarian Eucecryphalus schultzei was created in the 19th century by Leopold and Rudolf Blaschka. 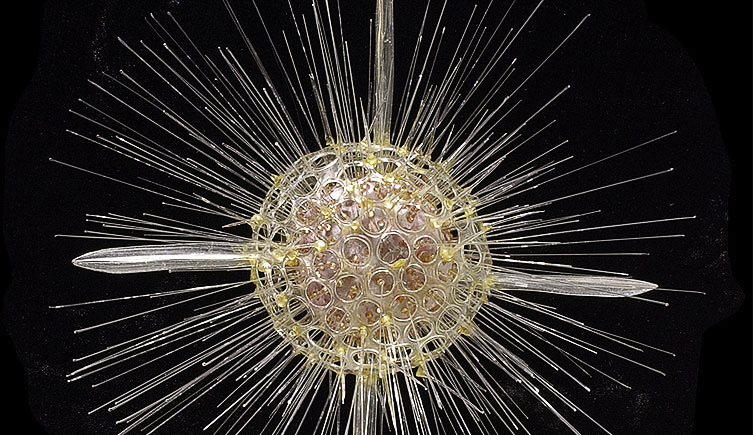 Photo Credit: Courtesy of The Natural History Museum at South Kensington (UK) and the Paleontology Collections.
Glass model of the radiolarian Actinomma asteracanthion created in the 19th century by Leopold and Rudolf Blaschka.

Foraminifera, or forams for short, have amoeba-like bodies within exoskeletons (tests) that are generally made of calcium carbonate. They have lived in the oceans for millions of years and are found throughout every ocean on Earth. The planktonic forams first appeared in the fossil record in the Jurassic period, about 201-208 million years ago, and their ubiquity and persistence through geologic time makes them remarkably useful in studying ancient oceans. The Foraminifera are divided into two groups: benthic foraminifera that live on the sea floor, and planktonic foraminifera that live suspended in the water column.

The name “foraminifera” is derived from the Latin word foramen, which means ‘opening’, referring to the apertures in their tests. They have one or more openings (the apertures) in their tests through which the foram can extend its body by means of thin, threadlike projections called pseudopods. Pseudopods are basically used for functions such as food capture and moving around. When hunting, they use their sticky pseudopods to snare food and draw it in towards the aperture, where they can dissolve and absorb it. Many species of Foraminifera feed on small marine plants and other detritus, while some are carnivorous and feed on other smaller plankton species. Forams have been observed eating phytoplankton, marine snow (organic materials that fall through the water) and even the small crustaceans called copepods.

The exoskeletons (tests) of Foraminifera are grown chamber-by-chamber to accommodate the cell as it matures, sort of like adding rooms onto a house. These chambers often coil or stack in a spiral pattern. As you can see in the photomicrographs below, foram tests have many shapes, ranging from sphere, cone or disc to a popcorn-like ‘globose’ profile. A single, average-sized foram test is generally about half a millimeter long, barely visible to the naked eye. 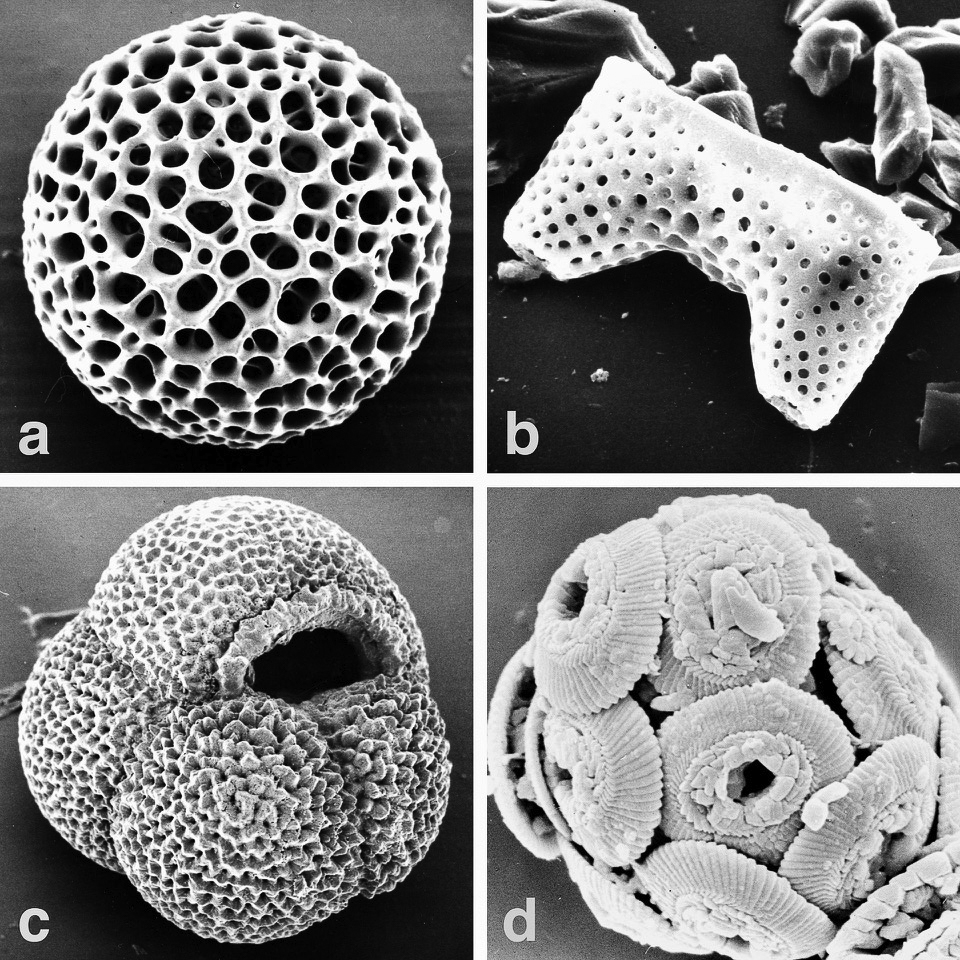 Star sand is made up of remnants of tiny foraminifera organisms, known by their scientific name is Baculogypsina sphaerulata, but more commonly referred to as “living sand.” The calcium carbonate-rich exoskeletons of these microscopic animals wash up by the millions on shore after the foram dies. This particular species is found only in East Asia along the Pacific Ocean in coral reefs. Star Sand Beach and the other coastlines where B. sphaerulata live and die are key destinations for fossil collectors. 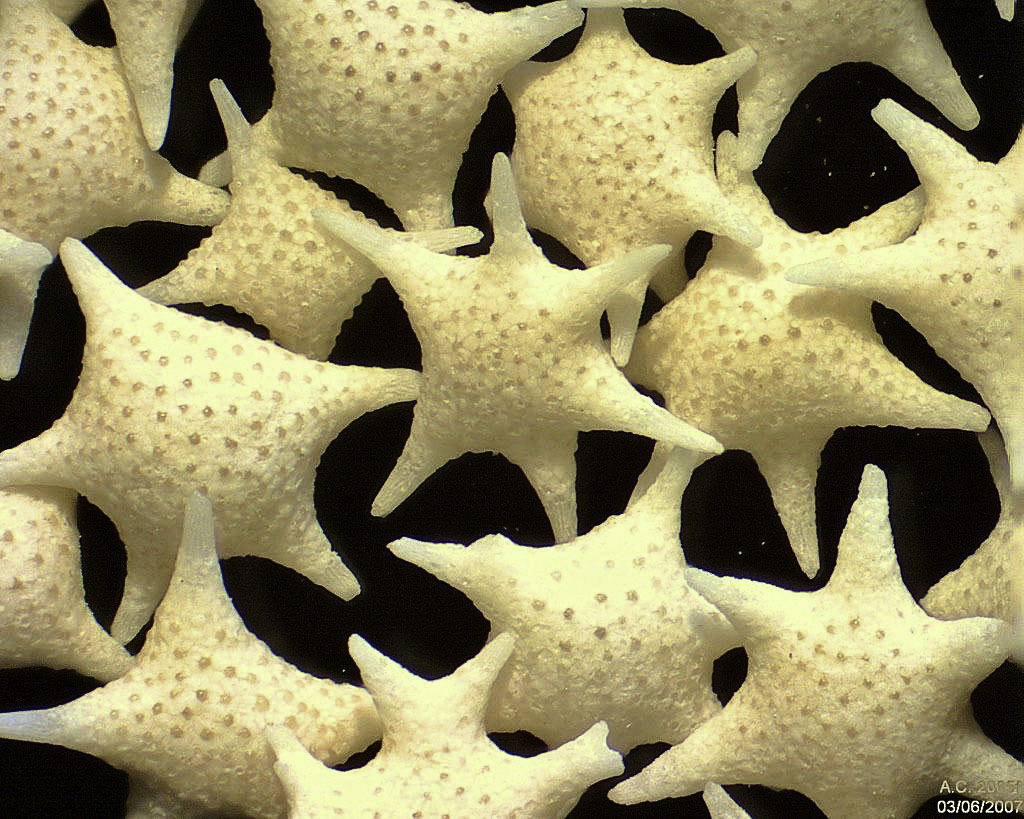 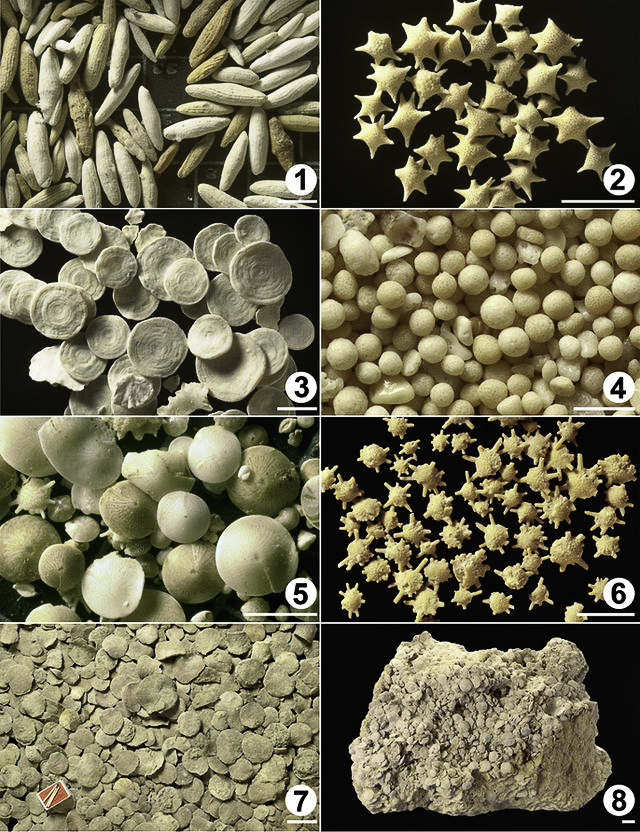