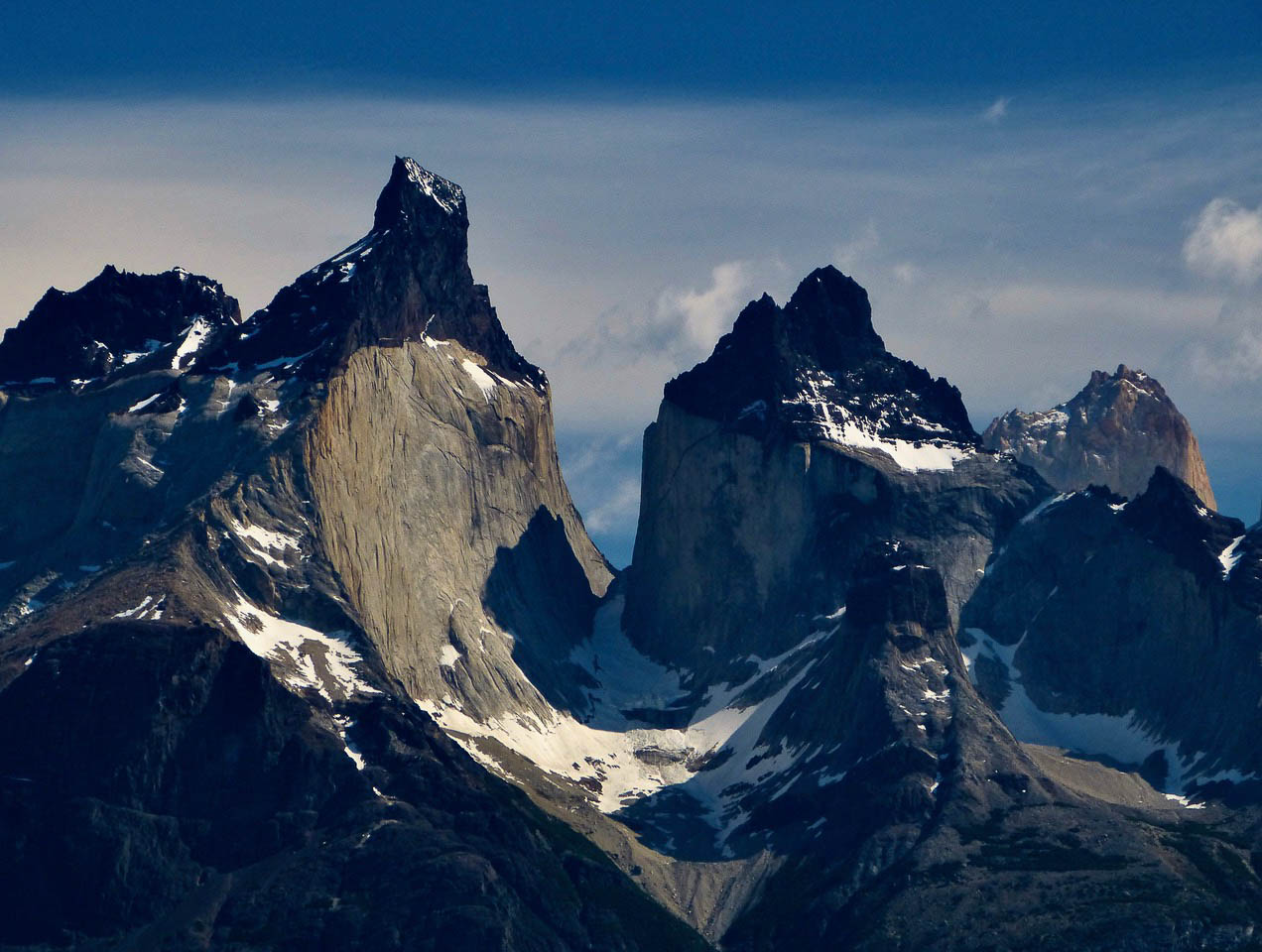 Photo Credits (above and below): Courtesy of Audrey DeLella Benedict.

There are only a few places on Earth where you can imagine the ground shifting beneath your feet, where the dynamic natural forces shaping our planet are never at rest. Patagonia is one of those places. Along the Pacific edge of Patagonia, tectonic plates continue to move eastward and downward, diving into the molten caldron of the mantle, lifting the Andes slowly skyward, and fueling volcanic fires along the Andean crest. Icefields and glaciers still grace the highest reaches of the Andes and a maze of deepwater fjords sculpted by ancient glaciers render much of Patagonia’s Pacific coastline accessible only from the water. Although Charles Darwin wasn’t able to reach the headwaters of the rivers flowing eastward across the Patagonian steppe towards the Atlantic Ocean, he correctly guessed that meltwater flowing from massive Andean snowfields and glaciers must be their source. I can only imagine how much Darwin would have enjoyed the aerial perspective provided by the NASA/Landsat 8 images I’ve included in this ePostcard. 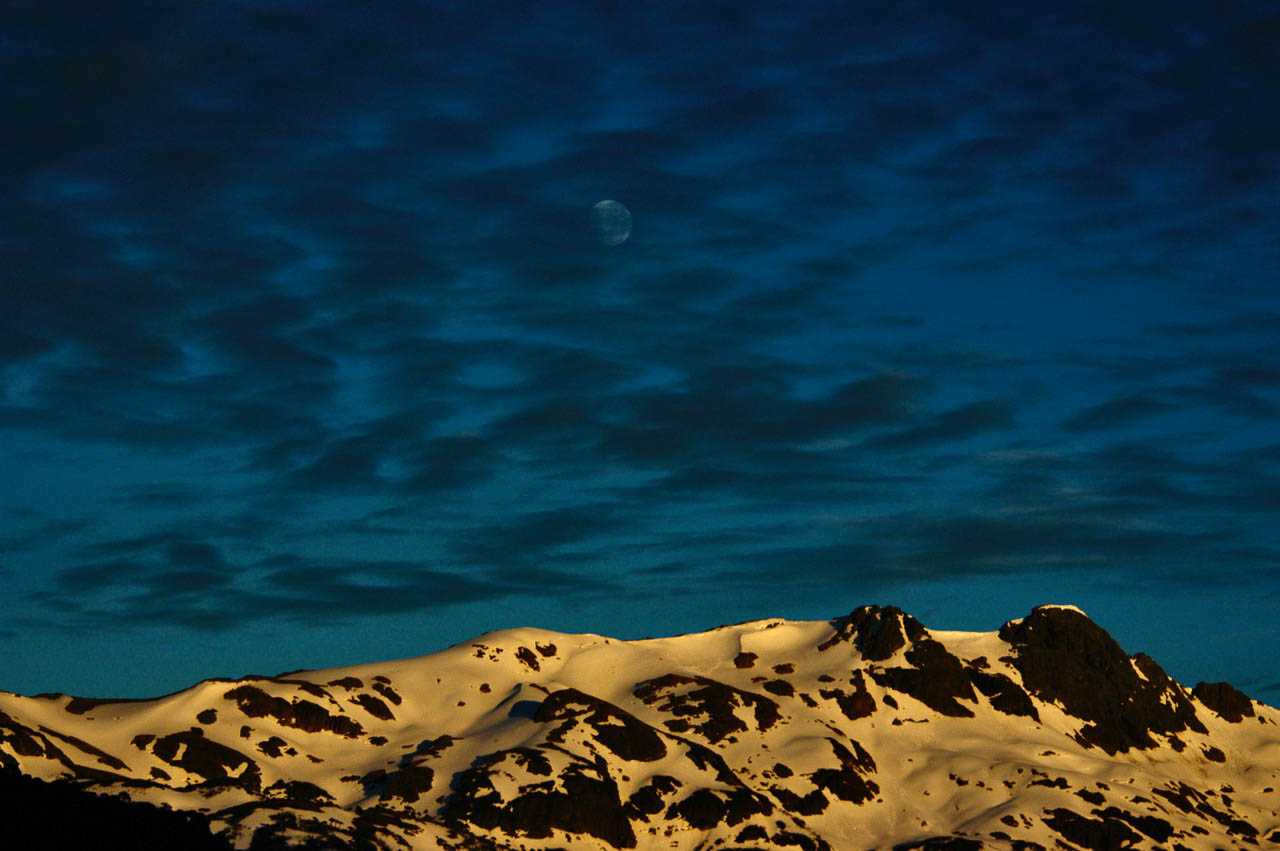 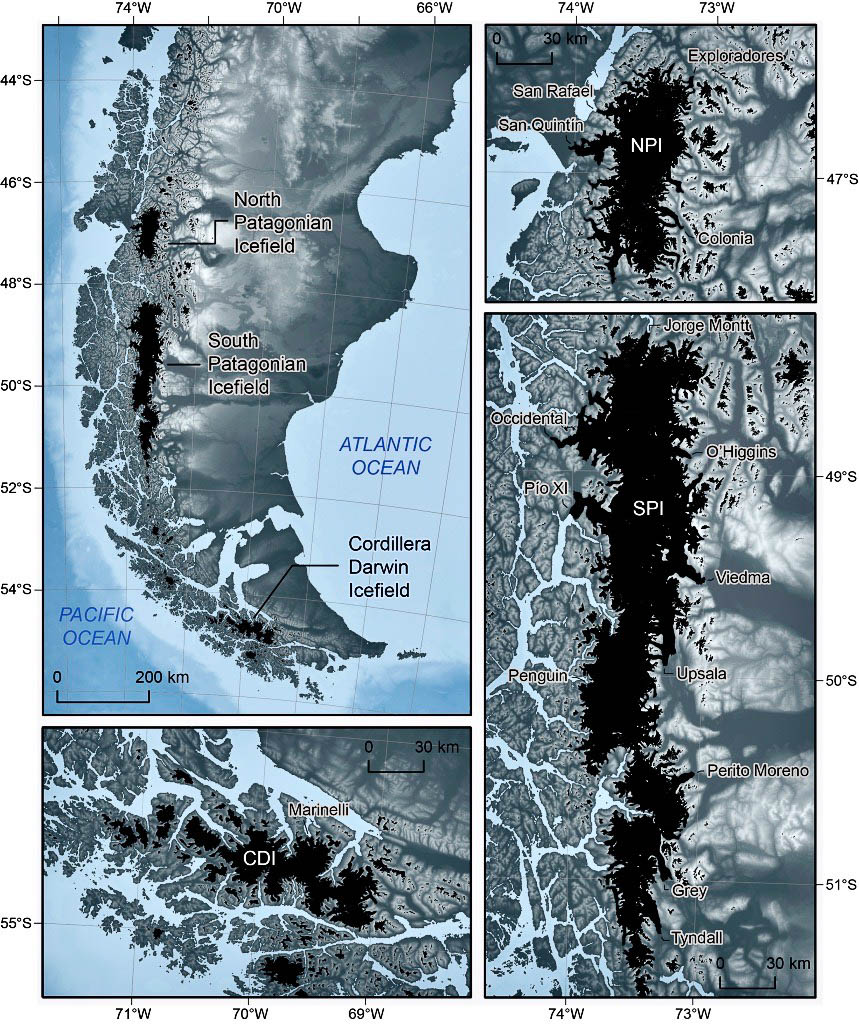 Patagonian weather can often be fierce, but clouds cooperated for these expansive space-based views of the Patagonian Icefields. In the broad mosaic view above, the differences between the western and eastern sides of Patagonia are clear. The landscape west of the icefield is much greener, driven by the intense precipitation that drops out of warm, wet Pacific air masses as they ascend the mountains. Land around the fjords support large trees and lush forest cover. Precipitation can be intense on the west side of the icefields, which receive up to 160 inches (4 meters) of rain and snow per year; it is more moderate in the east, which receives less than 40 inches (1 meter) per year. Glaciers on the eastern side of the icefield end in some of the largest proglacial lakes in the world. As you will note in the images below, the lakes are filled with so much fine sediment from the glaciers—also known as glacial flour—that their turquoise color can be seen from space.

While the Patagonian Andes are home to hundreds of small caps and valley glaciers, most ice is locked up in three major Patagonian Icefields, which occur south of ~46°S and are called the North, South, and Cordillera Darwin Icefields (see the map below). Together, these icefields contain around 5,500 gigatons of ice and represent the largest expanse of ice in the Southern Hemisphere outside Antarctica. While large, today’s icefields are the remnants of a much larger Patagonian Ice Sheet, which formed during the global Late Glacial Maximum around 21,000 years ago. Many of these glaciers come to an abrupt end on land, while others terminate in water. The water-terminating glaciers San Rafael and San Quintín are among the largest glaciers draining ice from Patagonia’s northernmost icefield.

Patagonia has a temperate maritime climate, with a strong west-east precipitation gradient as a result of the year-round passage of westerly winds over the Patagonian Andes. Chile’s Bernardo O”Higgins National Park, running more than 200 miles from end to end, encompasses Patagonia’s Southern Icefield, which with its northern counterpart forms one of the largest expanses of glacial ice outside the polar regions. Ice creeps downslope through mountain valleys and exits through so-called “outlet glaciers.” Outlet glaciers of the Patagonian Icefields are fed by heavy snowfall in the accumulation area, and have high melt rates at lower elevations.

The majority of Patagonia’s glaciers are now in retreat, a melting icescape that bears witness to the collateral damage attributed to climate change. “The rapid thinning of the icefield’s glaciers illustrates the global impact of climate warming,” said glaciologist Dr. Eric Rignot, of NASA’s Jet Propulsion Laboratory and the University of California-Irvine. “We have shown that Patagonia glaciers experience some of the world’s most dramatic thinning per unit area, more than Alaska or Iceland or Svalbard or Greenland.” Meltwater from the Patagonian Icefield as a whole contributes to sea level rise, although the amount is less than what will come from Greenland and Antarctica. Scientists plan to keep studying the region from space, from the air, and on ground as a means of understanding the evolution of these glaciers and what glaciers in Greenland and Antarctica may look like in the future in a much warmer climate. 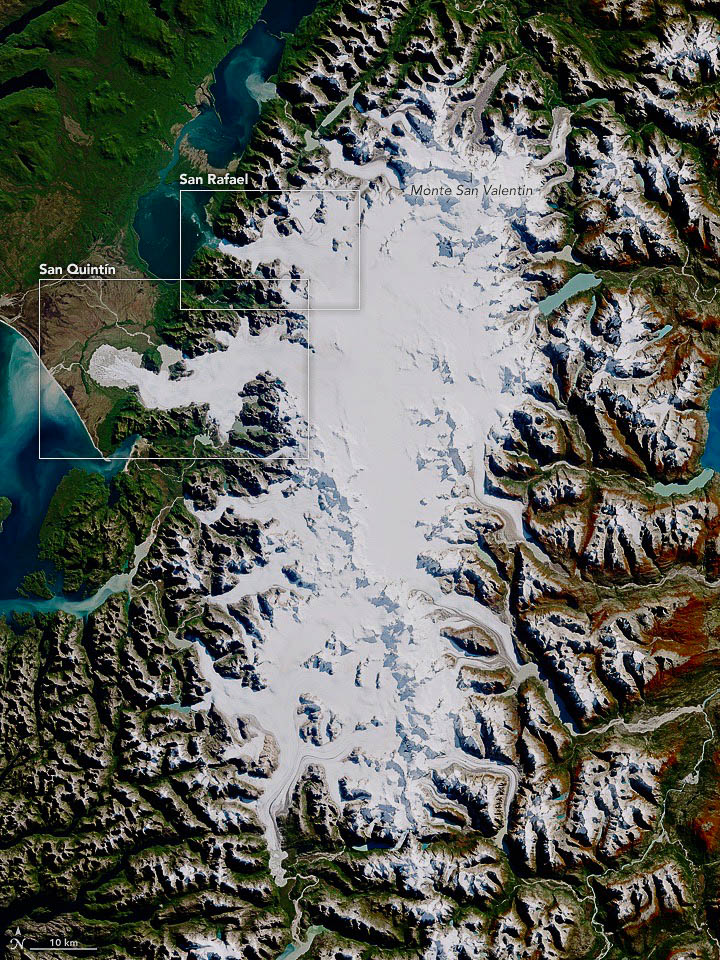 In April of 2017, the Operational Land Imager (OLI) on Landsat 8 captured this rare cloud-free image of the entire North Patagonian Icefield (NPI). The North Patagonian Icefield stretches over 100 km from 46°30’S to 47°30’S (see map above). Its current size is estimated at ~3,700 km2. While the northern icefield is about a third the size of its southern counterpart, it still has 29 main outlet glaciers along its perimeter, with glacial tongues that terminate either on land (11), in lakes (17), and only one, Glacier San Rafael, terminates in the sea. 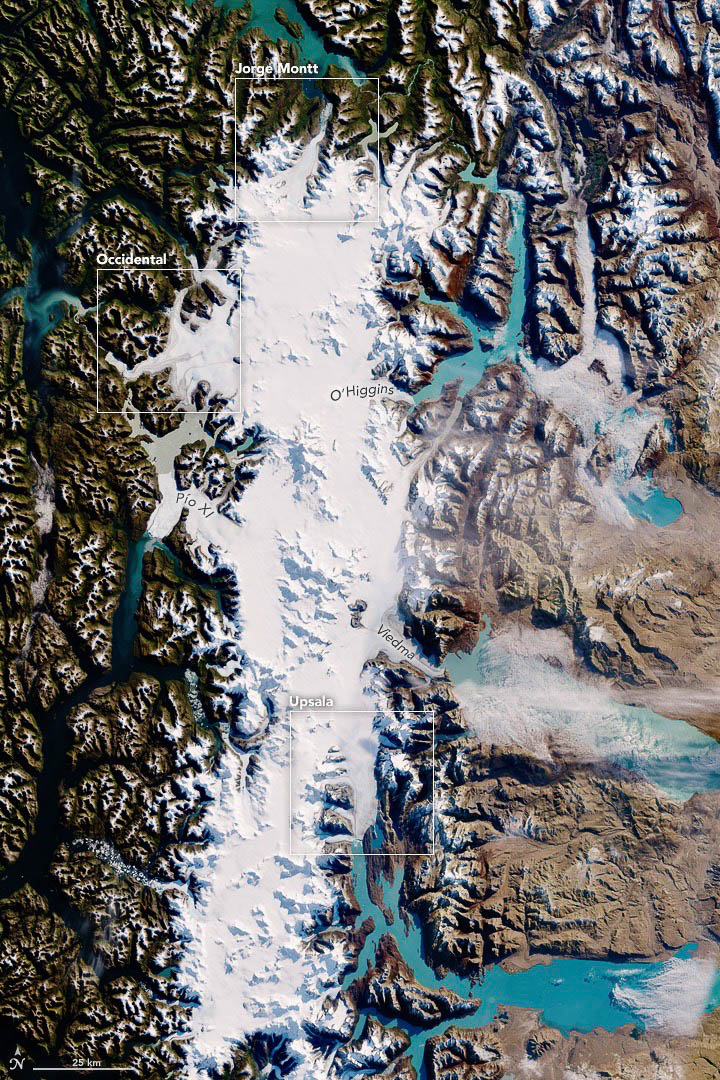 Detailed images provide a closer look at some of the icefield’s largest, most notable glaciers. Jorge Montt, located on the north end of the South Patagonian Icefield, flows south to north and empties into a fjord that ultimately angles west toward the Pacific Ocean. Many of the fjords are choked with icebergs, especially in front of Jorge Montt. The presence of icebergs indicates the rapid disintegration and retreat of these glacier systems. In the image above, you can clearly see the glacier’s former extent in the 1980s, visible as the tan-gray area devoid of vegetation around the ice. This glacier has thinned and retreated so fast that vegetation has not yet had a chance to fill in. During peak retreat, the glacier was thinning vertically at a rate of 31 meters (100 feet) per year. 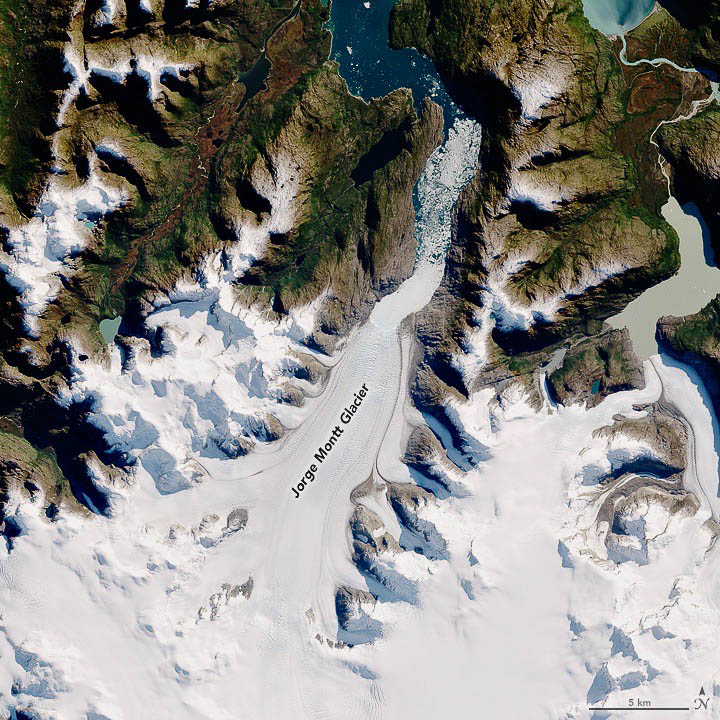 As you can see in the image above, the Jorge Montt outlet glacier of the Southern Patagonian Icefield, flowing out into a Pacific Ocean fjord that is choked with icebergs. 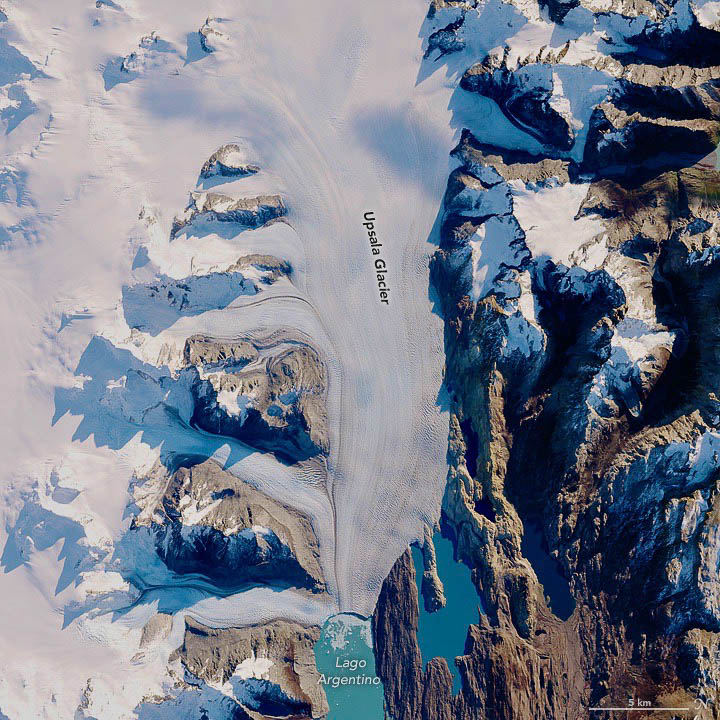 Upsala Glacier, on the eastern edge and flowing into Lago Argentino, is also among the icefield’s largest and longest glaciers. Its retreat has been ongoing since the glacier was first documented in 1810. The light brown rock along the glacier’s edge would have been covered with ice in the 1980s. 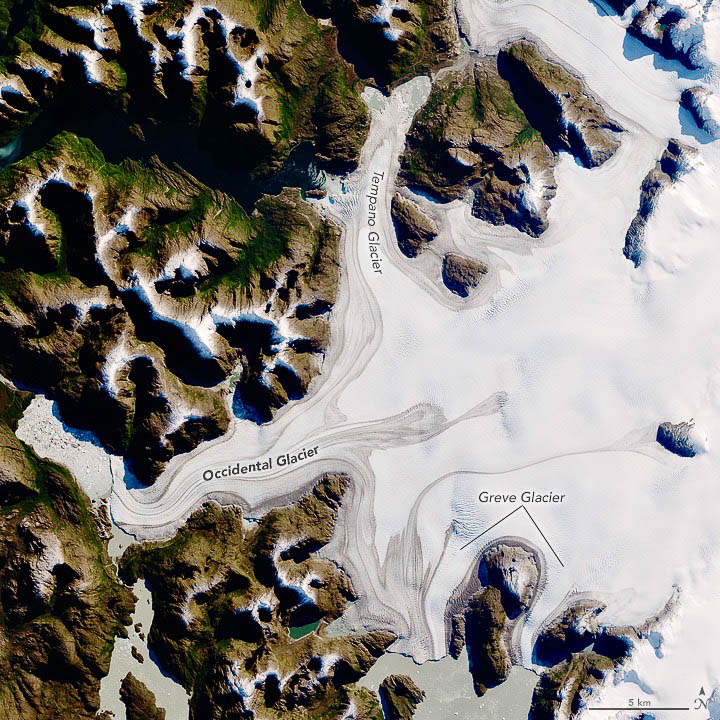 Occidental, another of the larger glaciers, has retreated less than its neighbors—only about 1 kilometer since the 1980s. It drains ice from a basin that nearly spans the entire icefield; the ice flows via a deep trough that extends below sea level. Both Occidental, and Greve Glacier to the southeast, flow along the flank of the active Lautaro volcano. Bands of volcanic ash are visible atop these glaciers at low elevation.