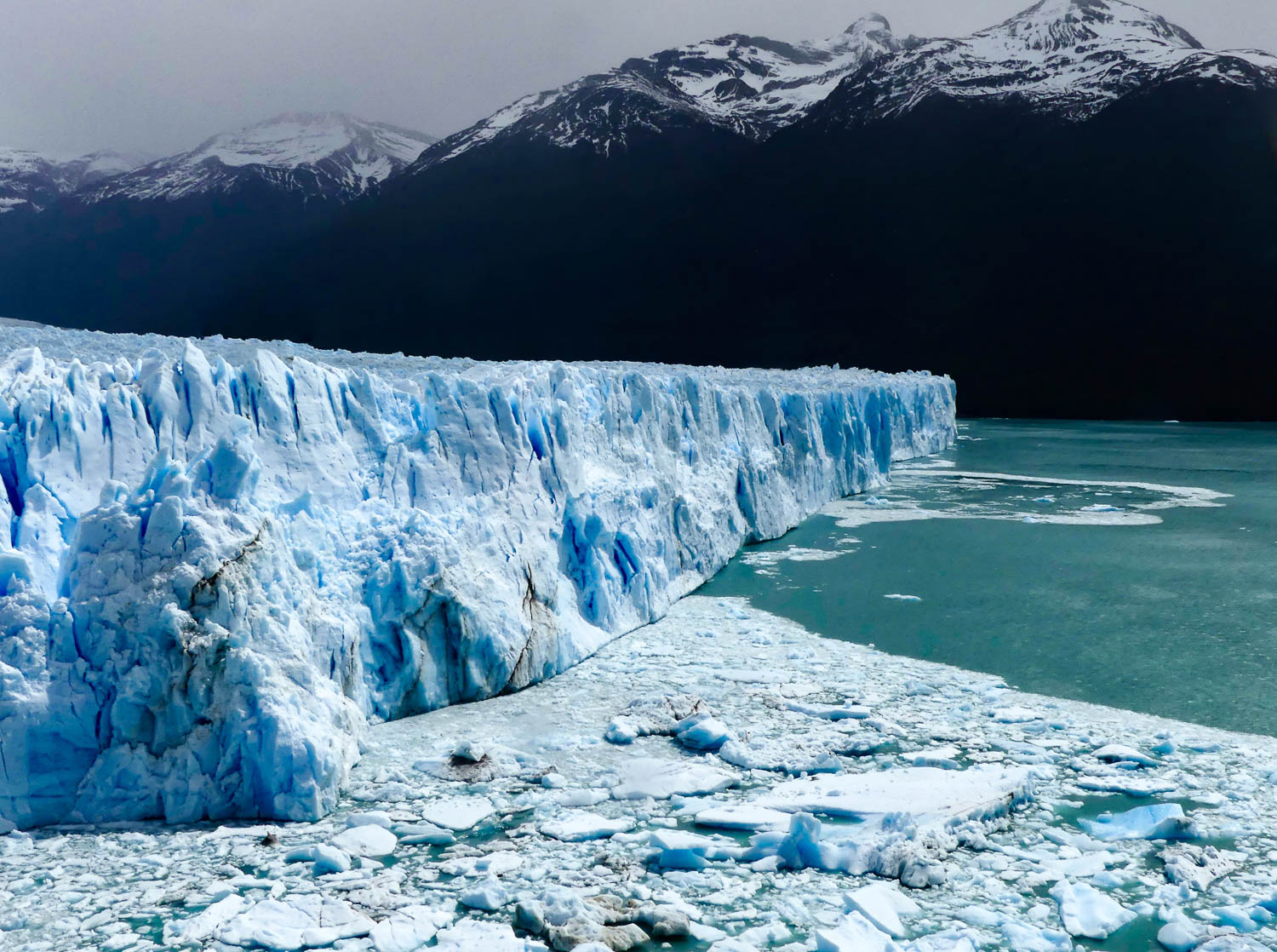 The extraordinary ice-sculpted scenery that captures the heart and imagination of everyone who visits Patagonia is the legacy of millions of years of glaciation and erosion. The Patagonian Ice Sheet originated as a large, elongated mountain ice mass that developed over the Andes mountains of southern South America during cold periods. It was divided into two main parts: a western part and an eastern part that spread out from a central ice-divide along the Andes. The ice sheet advanced and retreated at least 5 times in the last 1 million years in response to changes in global climate (i.e. cooling and warming).

The Patagonian Ice Sheet was drained by at least 66 major outlet glaciers. These glaciers transported ice from the interior parts of the ice sheet to the margins and ultimately controlled the overall form of the ice sheet. Rather than simply ﬂowing east or west from the main ice-divide, these outlet glaciers were strongly influenced by topography. On the western side, these glaciers flowed from higher elevations towards the sea along a complicated network of bedrock valleys. During the Last Glacial Maximum (LGM) around 21,000 years ago, the Patagonian Ice Sheet almost completely submerged the Patagonian Andes between around 38 to 56°S. In length, the distance between the most northern and southern tips of the ice sheet was around 2000 kilometers. Please refer to Map #1 below. 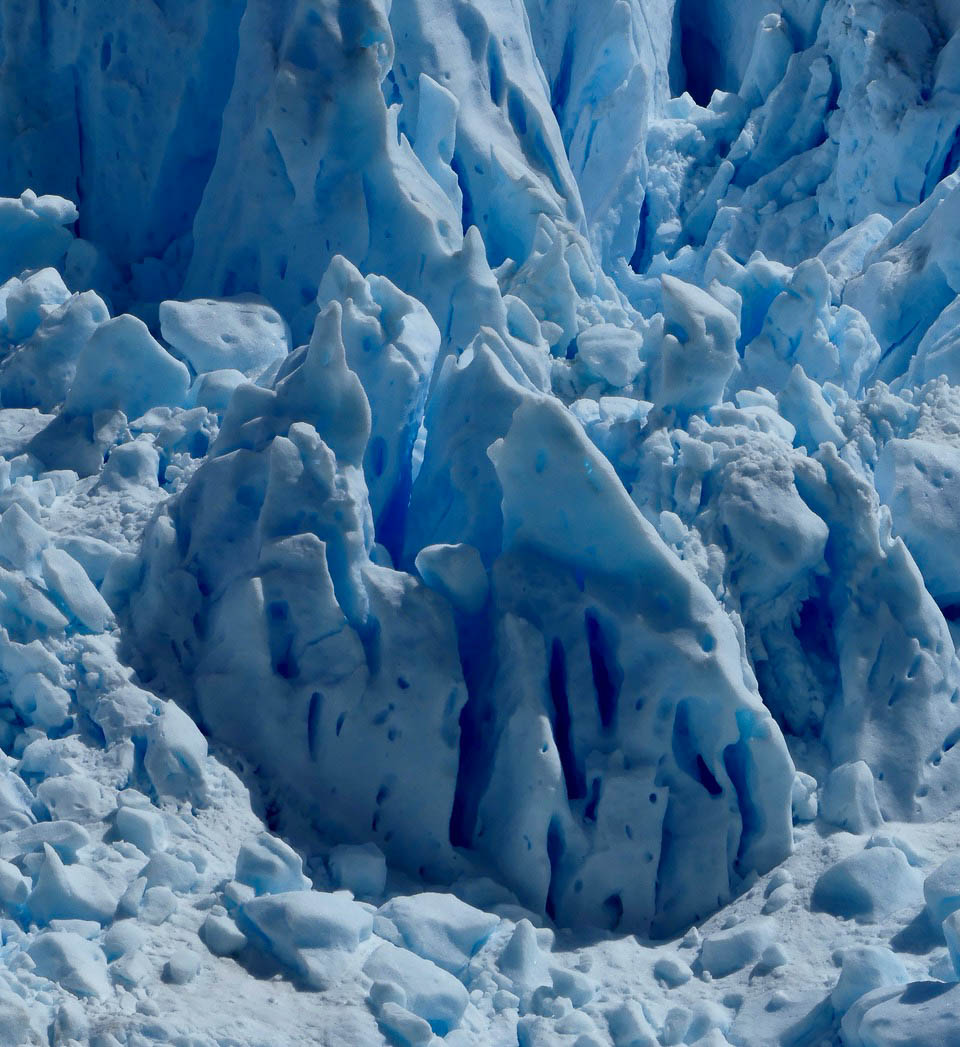 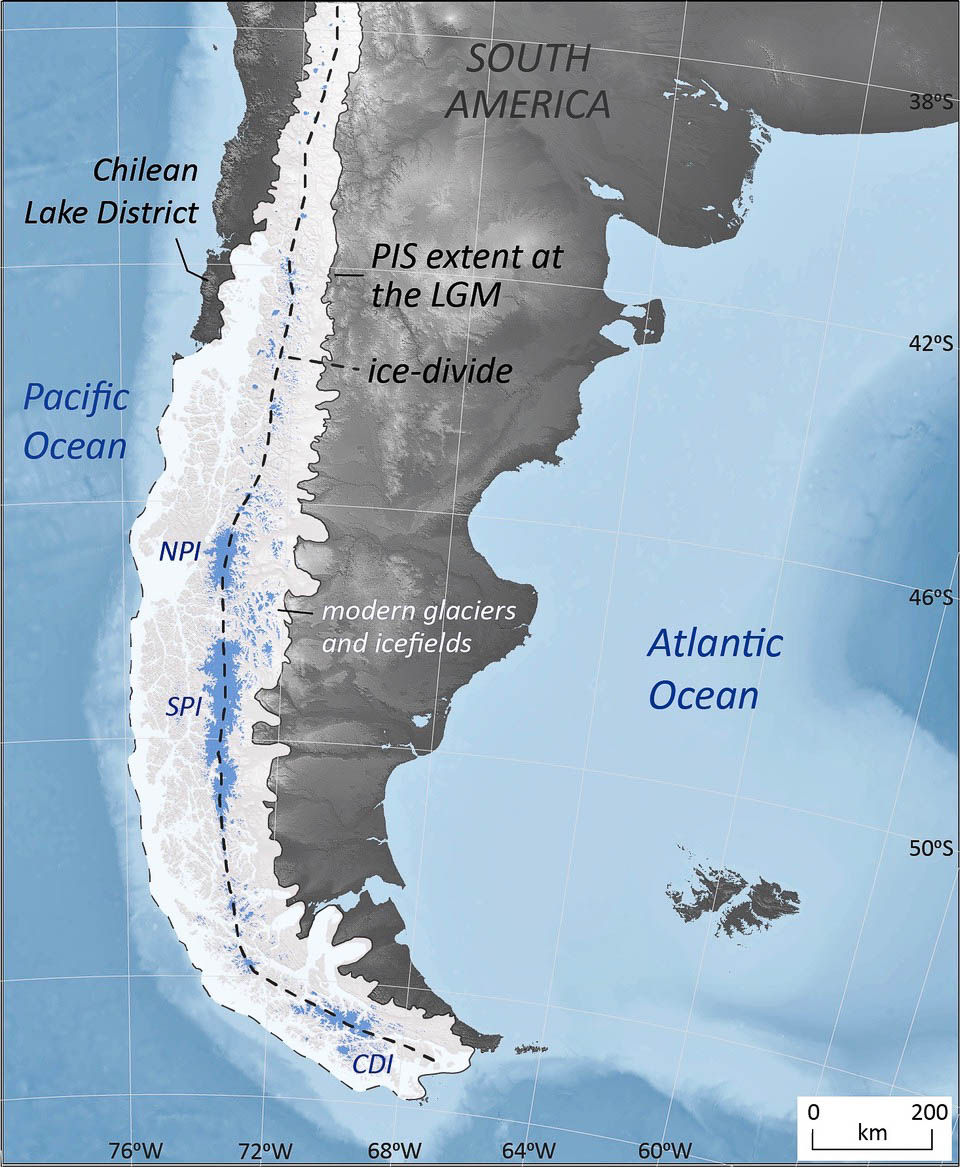 All 3 Map Credits: Courtesy of AntarcticGlaciers.org and Royal Holloway University of London.

Map #1 (above): This map shows the Patagonian Ice Sheet (in white) at the Last Glacial Maximum (LGM), around 21,000 years ago. The modern North (NPI), South (SPI), and Cordillera Darwin (CDI) Iceﬁelds, and other smaller mountain glaciers, are shown in light blue for comparison. 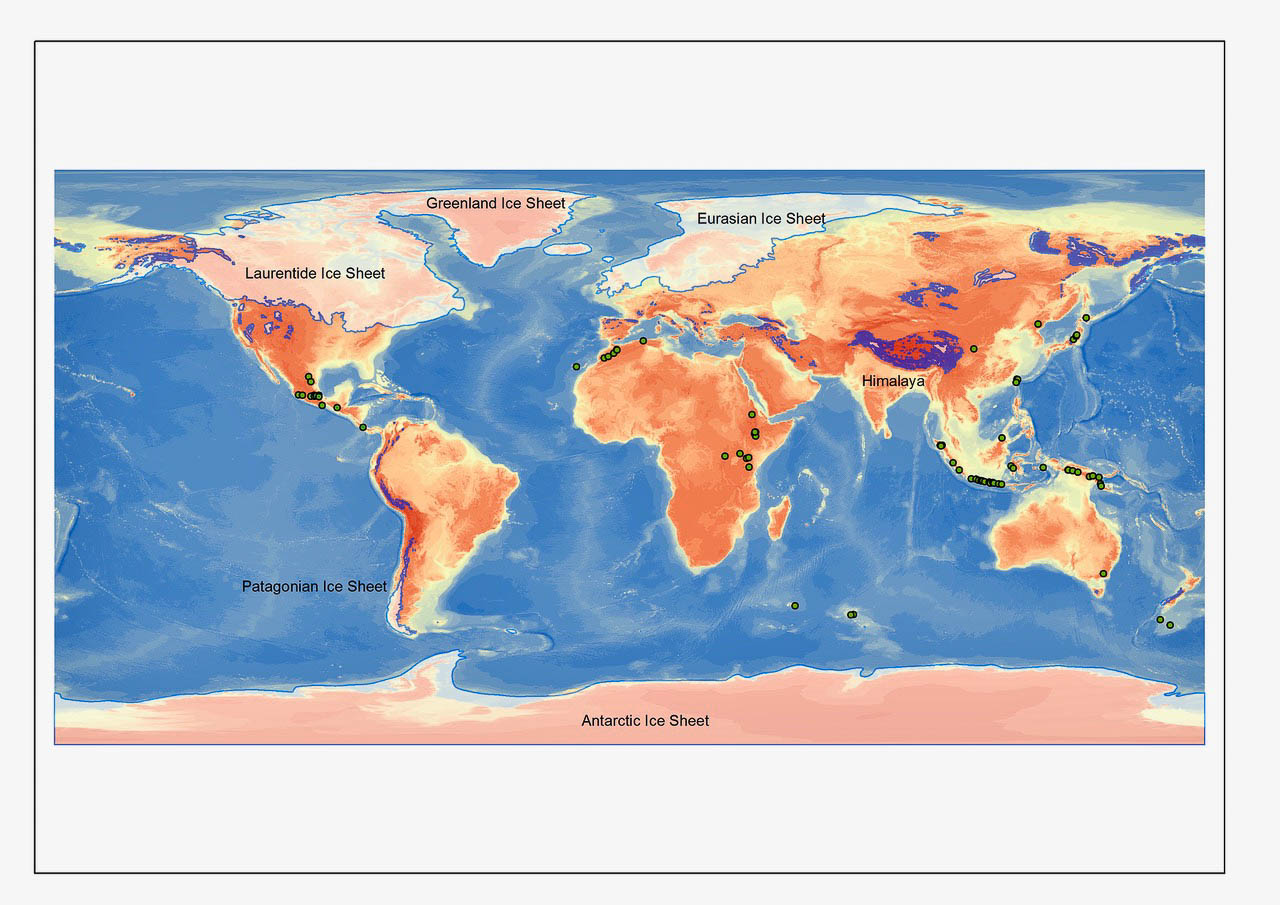 Map #2 (above): This map shows the ice sheets (in solid purple or as a purple perimeter line) and the major glaciers (green dots) at the Last Glacial Maximum worldwide, around 27,000 to 21,000 years ago. 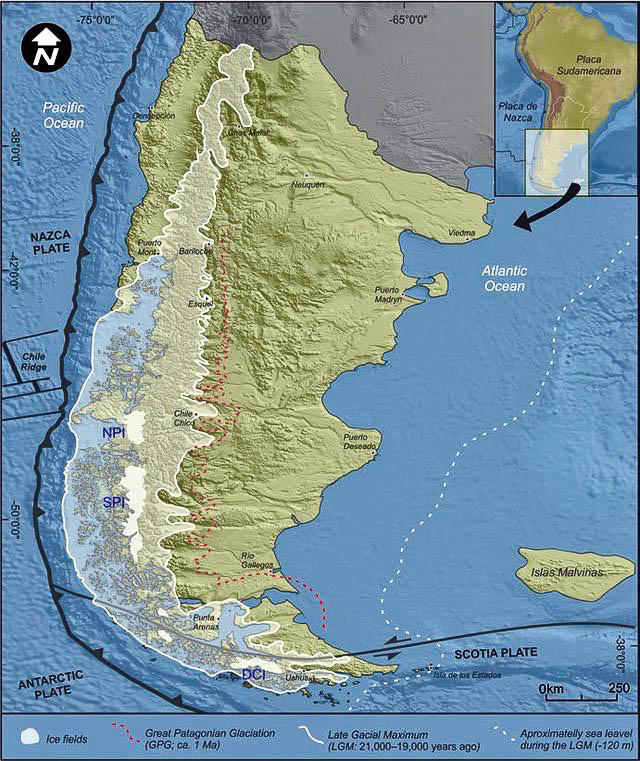 Map #3 (above). This map shows the modern North (NPI), South (SPI), and Cordillera Darwin (CDI) Iceﬁelds (in white). The red dotted line indicates the maximum extent of the Great Patagonian Icefield (or Ice Sheet) on the eastern side of the Andes 1 million years ago. The black lines with arrows delineate tectonic plate margins and the direction of movement.

The modern Patagonian Icefields contain around 5,500 gigatons of ice and represent the largest expanse of ice in the Southern Hemisphere outside Antarctica. Our lead photo is of the Perito Moreno Glacier in Parque Nacional Los Glaciares (Argentina). While large, today’s icefields are mere remnants of the Patagonian Ice Sheet, which reached its greatest extent during the global Late Glacial Maximum around 21,000 years ago. With a few unique exceptions, these ice masses are currently in rapid retreat mode as a result of global warming.

Ice sheets are extremely sensitive to changes in the temperature and circulation patterns of the atmosphere and oceans. Regarding glacial extent and its relationship to changes in temperature, there are other factors that play a role as well, most importantly, changes in precipitation and radiation. In the Southern Hemisphere, which is dominated by oceans, Patagonia is one of only a few areas of land from which scientists can develop records of past environmental change. These records of long-term glacial change allow us to more fully understand how the Southern Hemisphere climate system works, and how it may interact with climate changes happening at the global scale. For scientists this means that the ongoing reconstruction and dating of former ice sheet activity can be used to better understand ice sheet-climate interactions. This body of knowledge will become critical in understanding how modern ice sheets will respond to continued global warming.

Let’s return to space and look down at the west side of the modern South Patagonian Iceﬁeld. You can see that some icecap and valley glaciers now terminate abruptly on land, while other outlet glaciers ﬂow into a maze of fjords along the Pacific Ocean coastline. We cannot currently be sure how far these outlet glaciers advanced, because the seafloor has not yet been explored for glacial landforms. However, computer simulations suggest that most of these outlet glaciers would have reached the continental shelf edge at the Late Glacial Maximum. These simulations also show that, on the western side of the ice sheet, glaciers were fast-ﬂowing, with ice velocities of up to 400 meters per year due to plentiful snowfall over the Andes. You can see in the satellite image below that the glacier in the upper right corner flows into a deep, midnight blue glacier-sculpted valley—a fjord—filled with sea water. We cruised through dramatic, ice-choked fjords that looked much like this in Tierra del Fuego (Cordillera Darwin Icefield) on our In Darwin’s Footsteps expeditions. 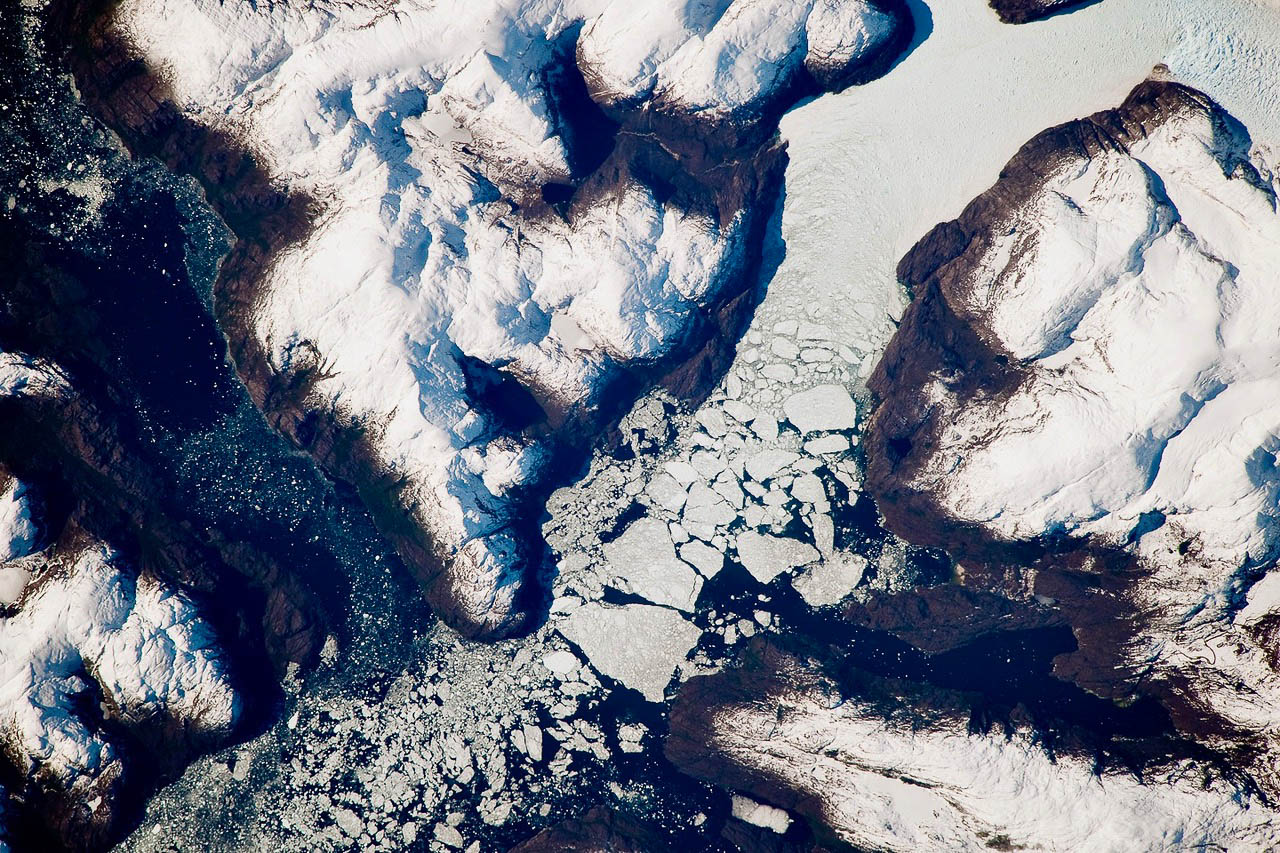 Ice sheets and glaciers form from partially melted snow that has accumulated over thousands of years. Each layer of snow slowly builds a thick and dense ice mass. Because the packed snow traps dust particles and gases, ice sheets contain an excellent historical record of Earth’s climate for researchers to analyze. The distinctive and transformative landscape features that result from glaciation are easy to identify once you learn what to look for. The evidence for past glaciations of the Patagonian Icefield are preserved in the Andean landscape in the form cirques, horns, arêtes, u-shaped valleys, hanging valleys, moraines and glacial lakes (tarns). Fine-grained lake sediments and massive quantities of rock debris and coarse, poorly sorted glacial outwash sediments reveal the presence and passage of these great glaciers. The quantity and variety of glacial landforms in Patagonia make the historic record of Patagonian Ice Sheet activity one of the longest and most complete anywhere in the world.

I encourage you to try to identify some of these distinctive glacial landforms and features in the following selection of my photographs. Why some glacier ice is blue and not white is a  common question for first-time glacier observers. Think about the ice you’ve seen on a stream, which typically includes a lovely mosaic of bubbles in the ice matrix. Whereas white glacier ice (basically clear) retains air bubbles, blue is the color of pure glacier ice because most of the air has been squeezed out due to the weight of the overlying ice. Pure ice has the properties of minerals. Like sapphires, glacial ice reflects the blue colors of the light spectrum, so that beautiful blue color is what reaches our eyes.

What about those blackish bands? Dirt and debris bands are formed as stratification bands in the accumulation area of the glacier on an annual basis. The darkish bands consist of organic and inorganic materials, such as lichens, volcanic dust or the rock debris that falls from the surrounding mountainsides and from airborne storm deposits, which become compacted over time. These bands are often upturned and contorted as a result of shearing during the glacier’s downslope movement, and are often easily visible in areas where the glacier arrived at an abrupt change in slope or when its bedrock channel narrowed and changed the glacier’s flow dynamics. A great deal of rock debris and sediment is also transported sub-glacially (along the base of the glacier) by the ice and meltwater, and may ultimately spread out to create a broad glacial outwash plain that persists long after glacial retreat. How do you think the blue hole formed in the final photo of my selection? 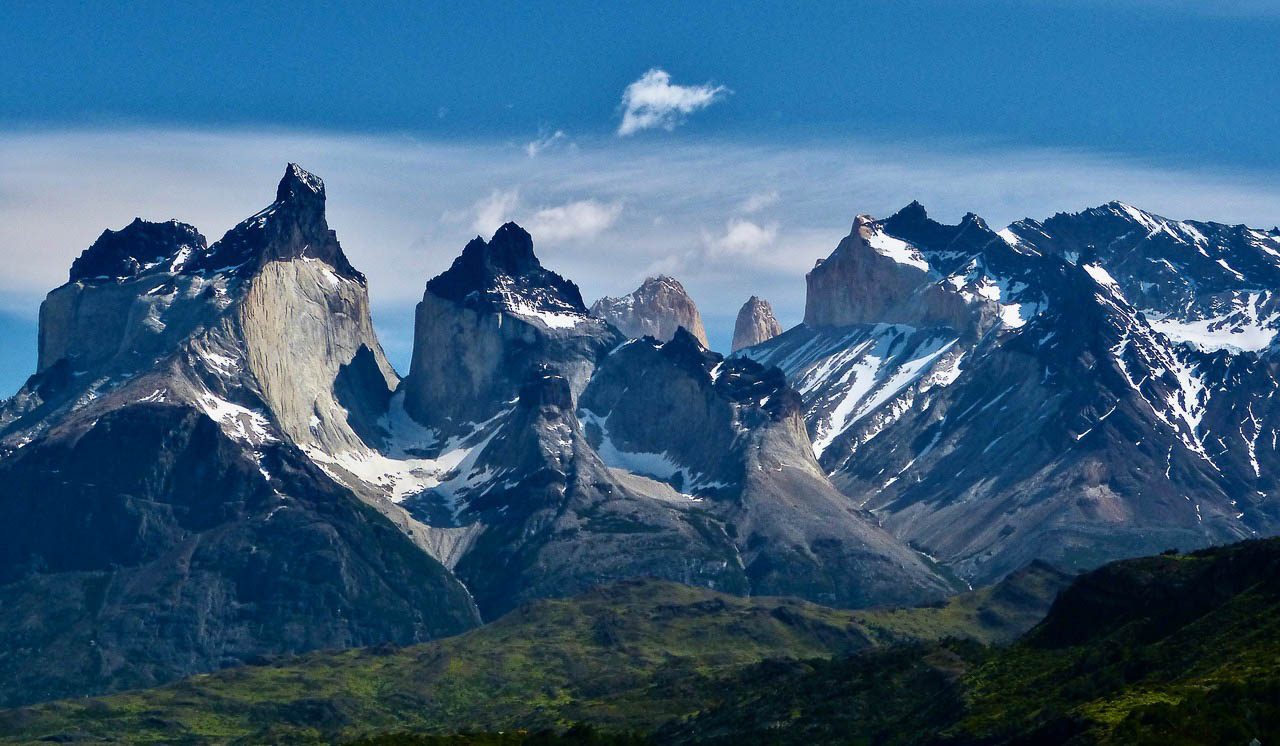 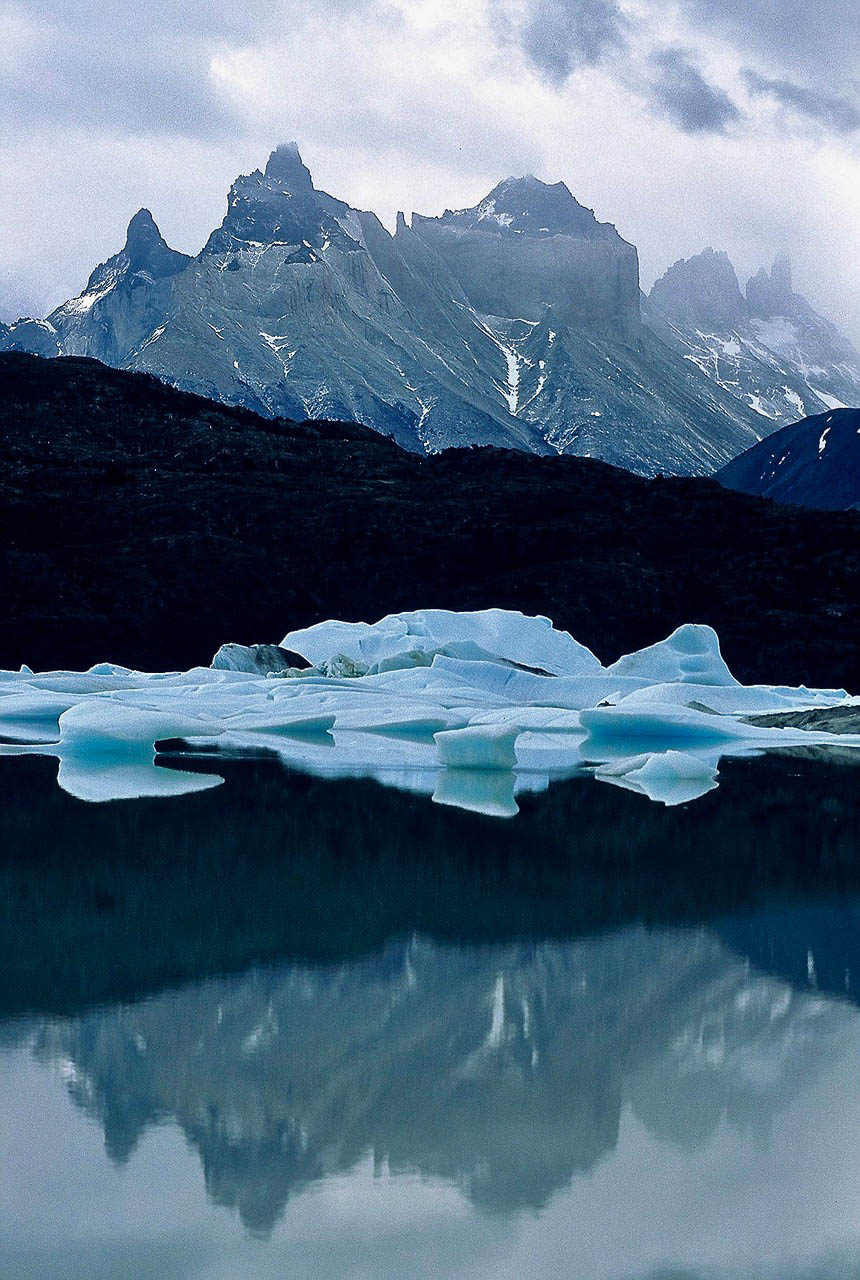 Here you see the Torres, Lago Grey and icebergs that have “calved” from the Grey Glacier, one of the most spectacular glaciers in the South Patagonian Icefield (Torres del Paine National Park). 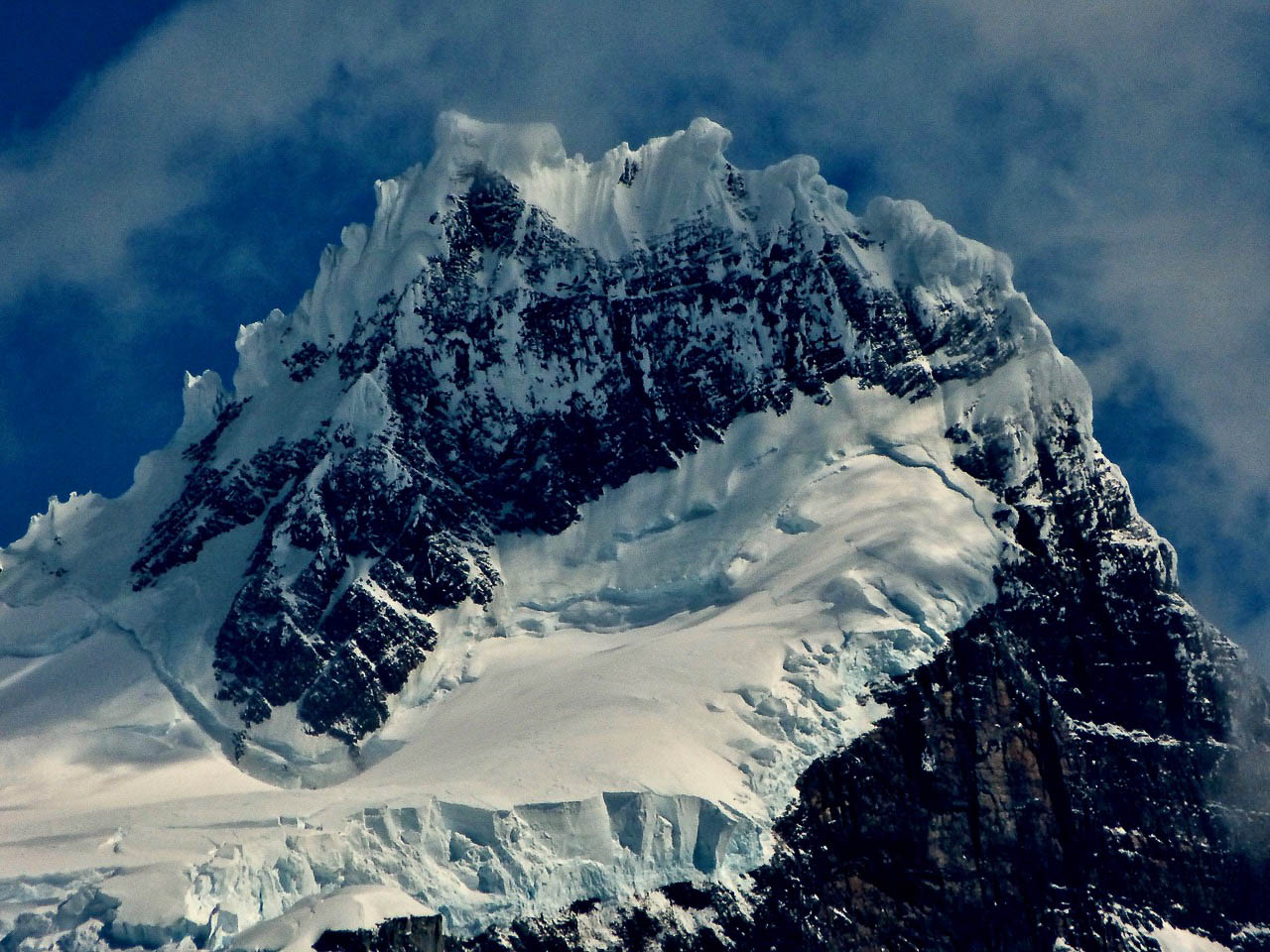 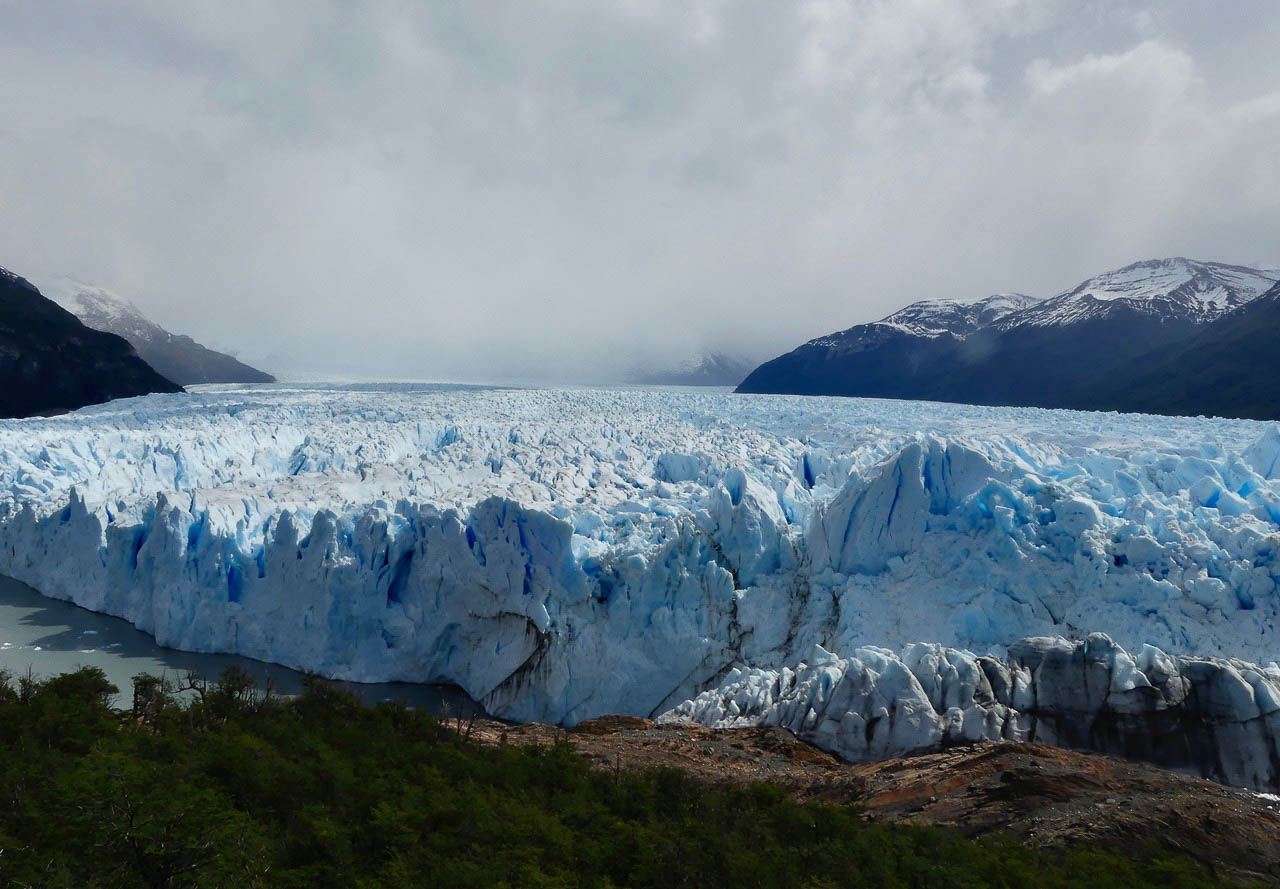 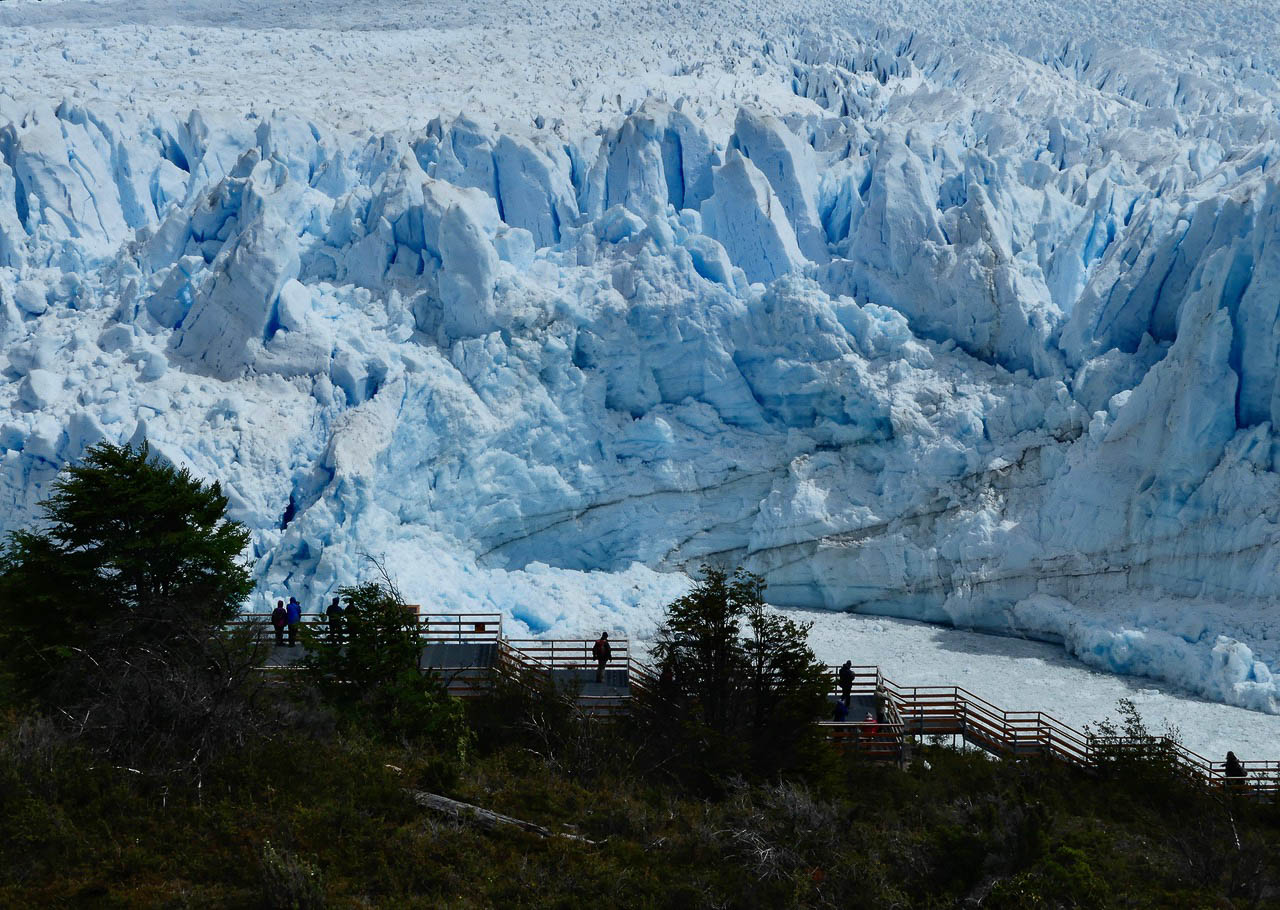 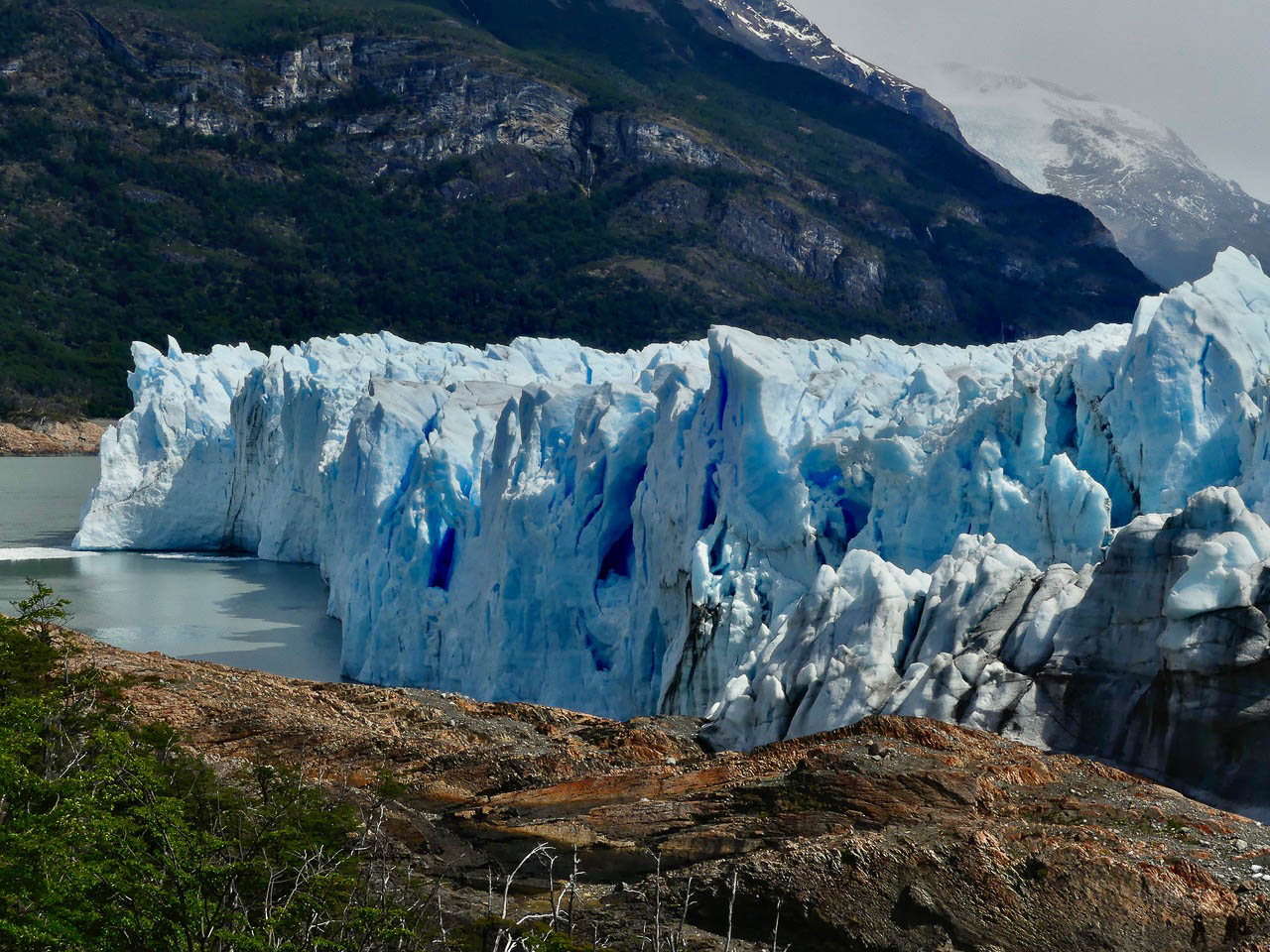 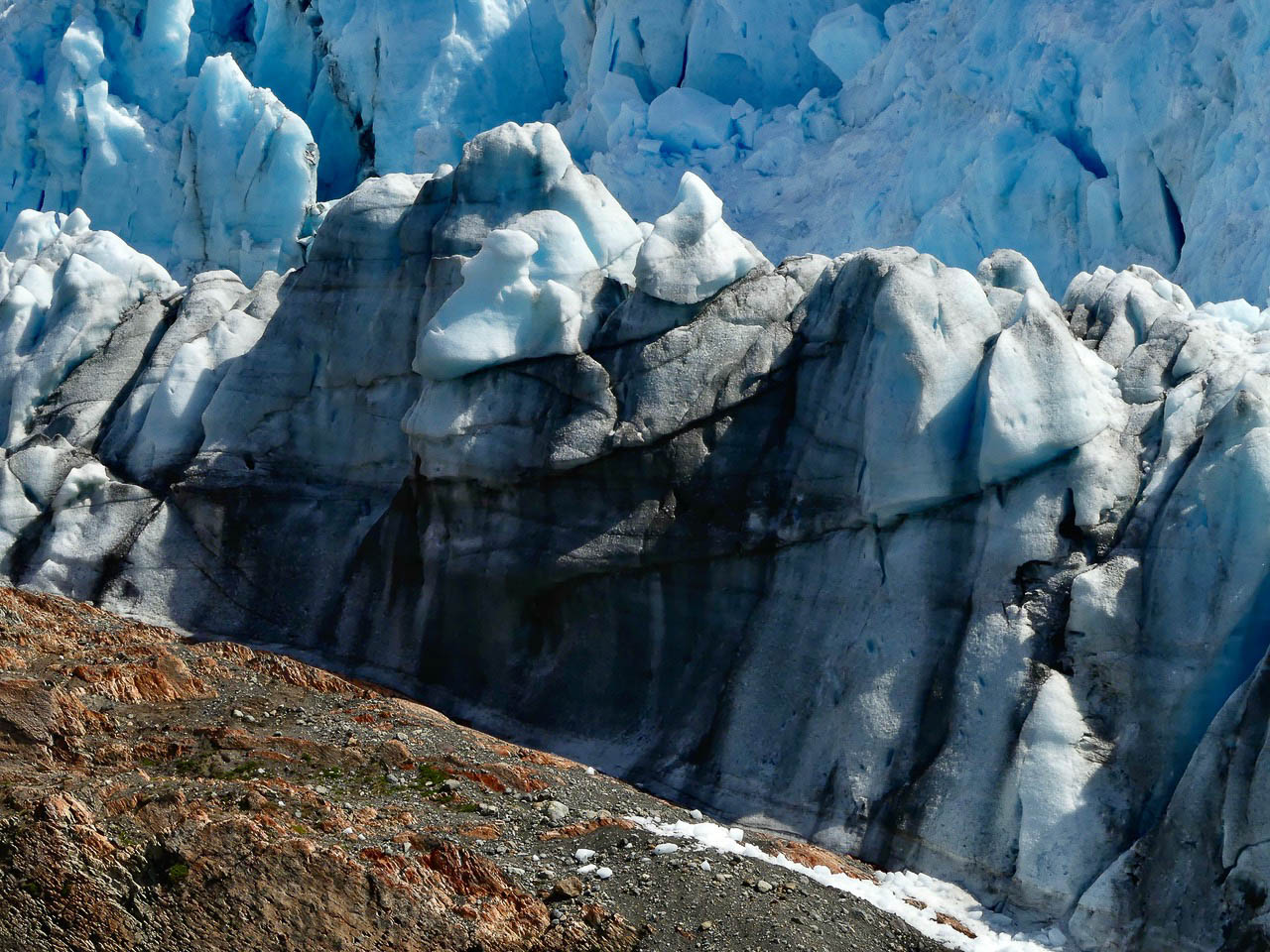 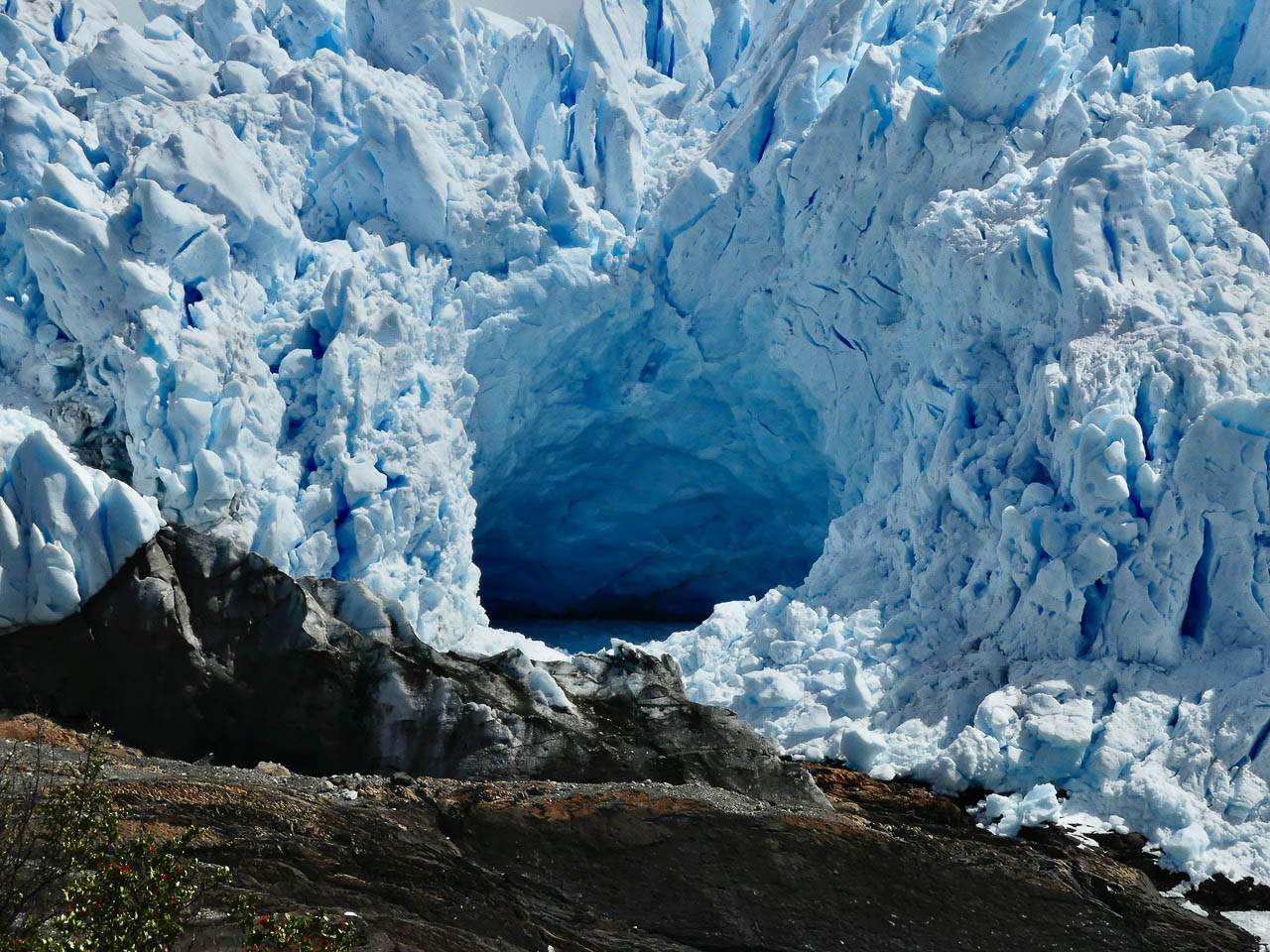