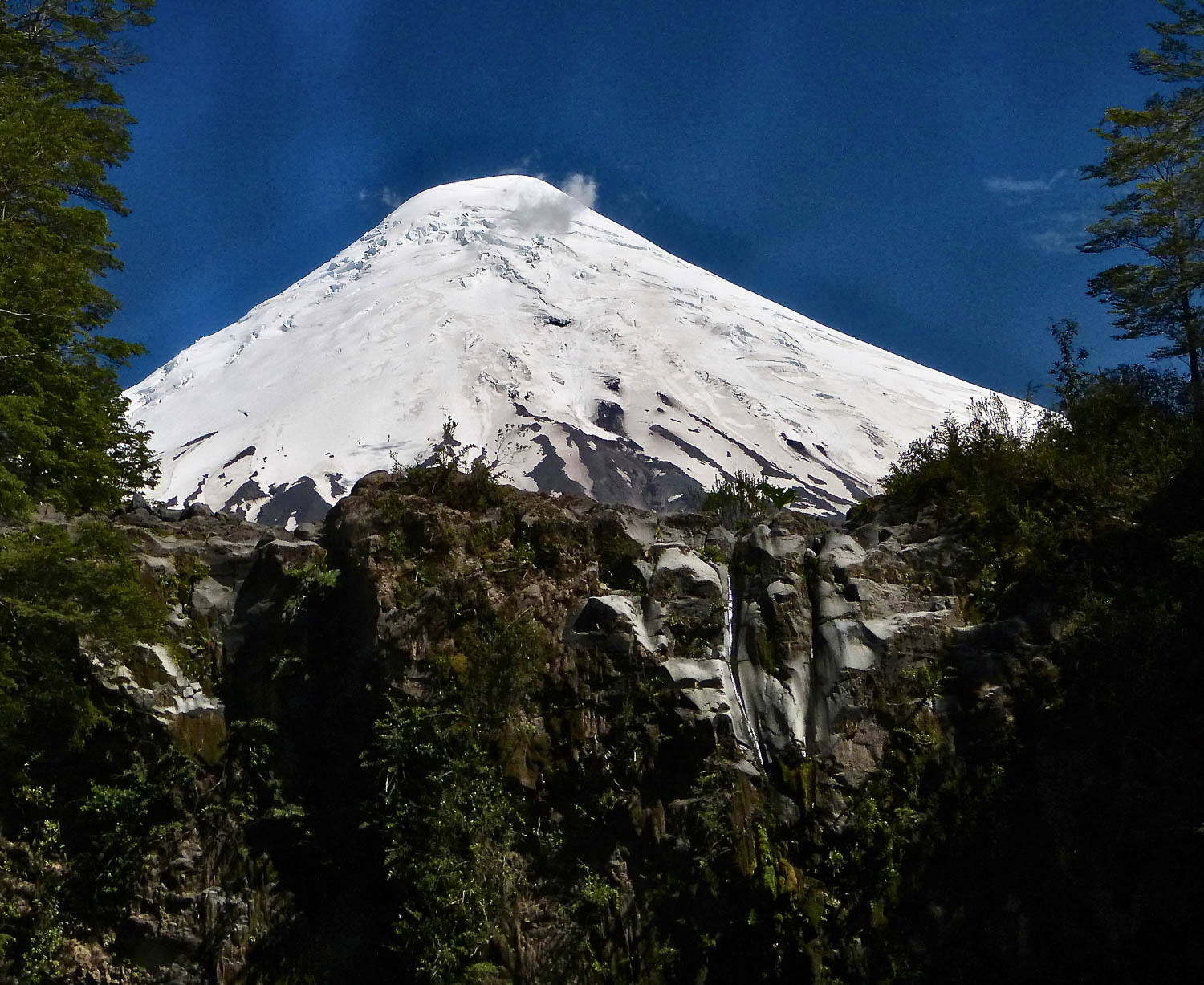 Photo credits: All Volcán Osorno photos are courtesy of Audrey DeLella Benedict. This 8,724 foot high (2659 m) stratovolcano and its lava-bench waterfall are located in the stunningly beautiful “volcano country” of the Chilean Lake District.

When viewed from the air, the snow-covered volcanoes of the Andes rise skyward like sentinels as they guard their mountain stronghold. The first time I saw Volcán Osorno I couldn’t help but think of the passage in Charles Darwin’s journal where he describes standing on the Beagle’s deck on January 19,1835 and watching as the night sky lit up with the spectacular, molten-red eruption of this Fuji-like volcano. The Beagle was anchored off Isla Grande de Chiloé at the time, and only a few weeks later Darwin and Captain Fitzroy would witness the effects of the devastating earthquake at Chiloé and at the city of Concepción. Darwin later learned that hundreds of miles to the north, Volcán Aconcagua and Volcán Coseguina (the later in Nicaragua, thousands of miles north of Aconcagua) erupted violently on that same night and that an earthquake associated with the Coseguina eruption was felt 1,000 miles away. The simultaneity of the earthquakes and eruptions inspired Darwin to theorize that certain volcanically-active zones must be interconnected and they “were parts of one and the same great phenomenon” (Darwin). He would later argue that the “force which elevates Continents” is the same as “that which causes volcanic outbursts.” Along with his many accolades, we might also add “first volcanologist and tectonic theorist” to the list!

THE PACIFIC RING OF FIRE

The Pacific Ring of Fire is an area in the Pacific Ocean basin where many earthquakes and volcanic eruptions occur as a direct result of plate tectonics: the movement and collisions of lithospheric plates. The Andean Volcanic Belt is a major volcanic belt along the Andes mountain system in Argentina, Bolivia, Chile, Colombia, Ecuador and Peru. It is formed as a result of subduction of the Nazca Plate and Antarctic Plate underneath the South American Plate. The Andean Volcanic Belt is segmented into four main areas of active volcanism: the Northern, Central, Southern, and Austral volcanic zones, each of which is a separate continental volcanic arc. These four zones are separated from each other by volcanic gaps (zones that lack volcanic activity). The volcanoes of the belt are quite diverse in terms of eruptive style, products and morphology. The volcanoes that dot the Andean highlands of central Chile and Argentina are part of the Southern Volcanic Zone, and geologists have identified some 2,085 volcanoes within this zone, and 55 are currently classified as “active.” 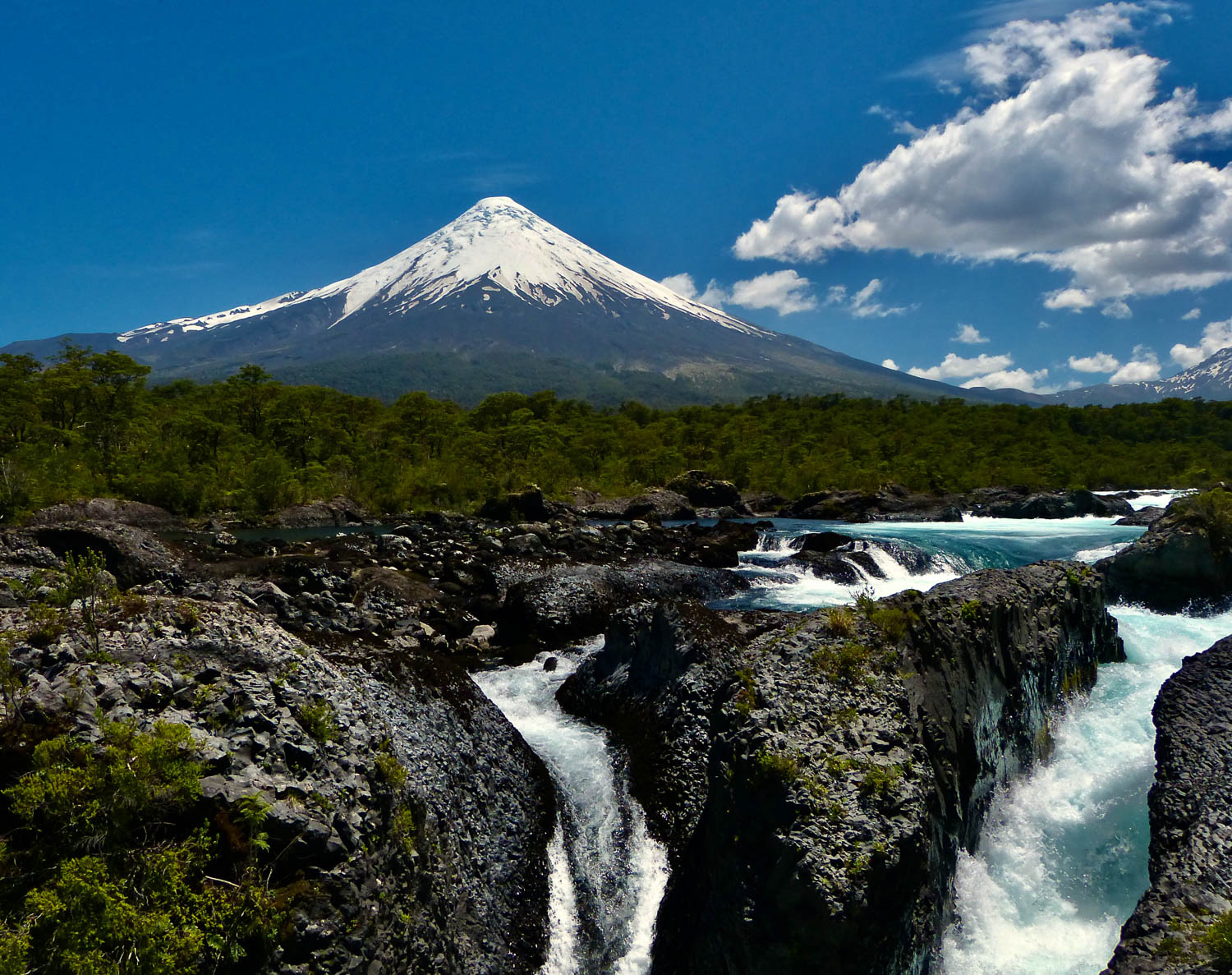 This photo of Volcán Osorno and the waterfalls along the upper reaches of the Petrohué River was taken in 2011 in Vicente Pérez Rosales National Park, just a short distance downstream from the river’s source at Todos los Santos Lake and a popular stop along the international travel route between Puerto Montt in Chile and Bariloche in Argentina.

Volcán Osorno, which sits between the turquoise-hued waters of Todos los Santos and Llanquihué Lakes, is one of the world’s most beautiful volcanoes. The classically-symmetrical, glacier-covered stratovolcano is located in the heart of the Chilean Lake District. Osorno is one of Chile’s most active volcanoes, with 12 historic eruptions of basaltic lava (andesite) that transformed the surrounding geography, including separating Todos Los Santos and Llanquihue Lakes.

The Liquiñe-Ofqui Fault Zone is located about a dozen miles east of the volcano, and recent research suggests that eruptions of Volcán Osorno are associated with the ascent of deep crustal basaltic magma enhanced by forces of this master fault, re-activating the lava reservoirs that are presumed to feed the volcano. Most of the eruptions have occurred from the summit and flank vents and fissures, the latter mostly on the volcano’s west and southwest sides. While Volcán Osorno’s historic activity was dominantly effusive (molten lava flows), multiple explosive pyroclastic (airborne) eruptions have also occurred over the past 14,000 years. Currently, Volcán Osorno’s status is dormant, and the last eruption occurred in 1869.

The Petrohué Waterfall (shown above) is one of many dramatic waterfalls that you’ll see along the Petrohué River as it cascades down a series of bench-like lava (andesite) flows produced by multiple eruptions of Volcán Osorno. The average water flow of these falls is 35.31 cubic feet per second (9,535 cubic meters per second), but it can be much larger during the rainy season when the surface level of Todos los Santos Lake rises by up to 3 meters. The river’s water is usually clear with an aquamarine hue, but when lahars (volcanic mudflows) flow down from the volcano, water at the falls can be loaded with sand and silt. The transport of these abrasive materials by the river explains the polished aspect of the rocks. The rock fluting you see in the photo below may be associated with columnar jointing in the fine-textured basalt. 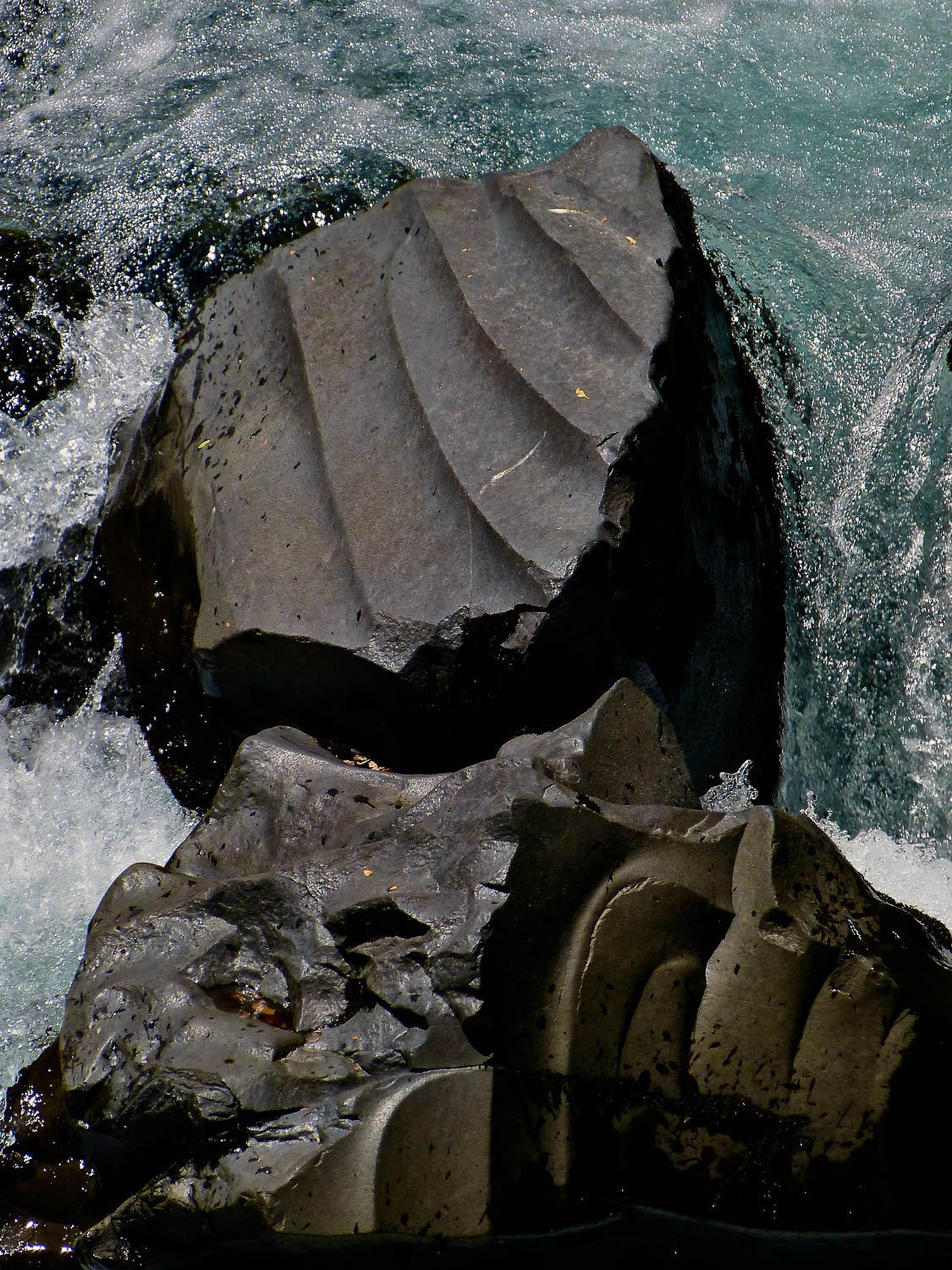 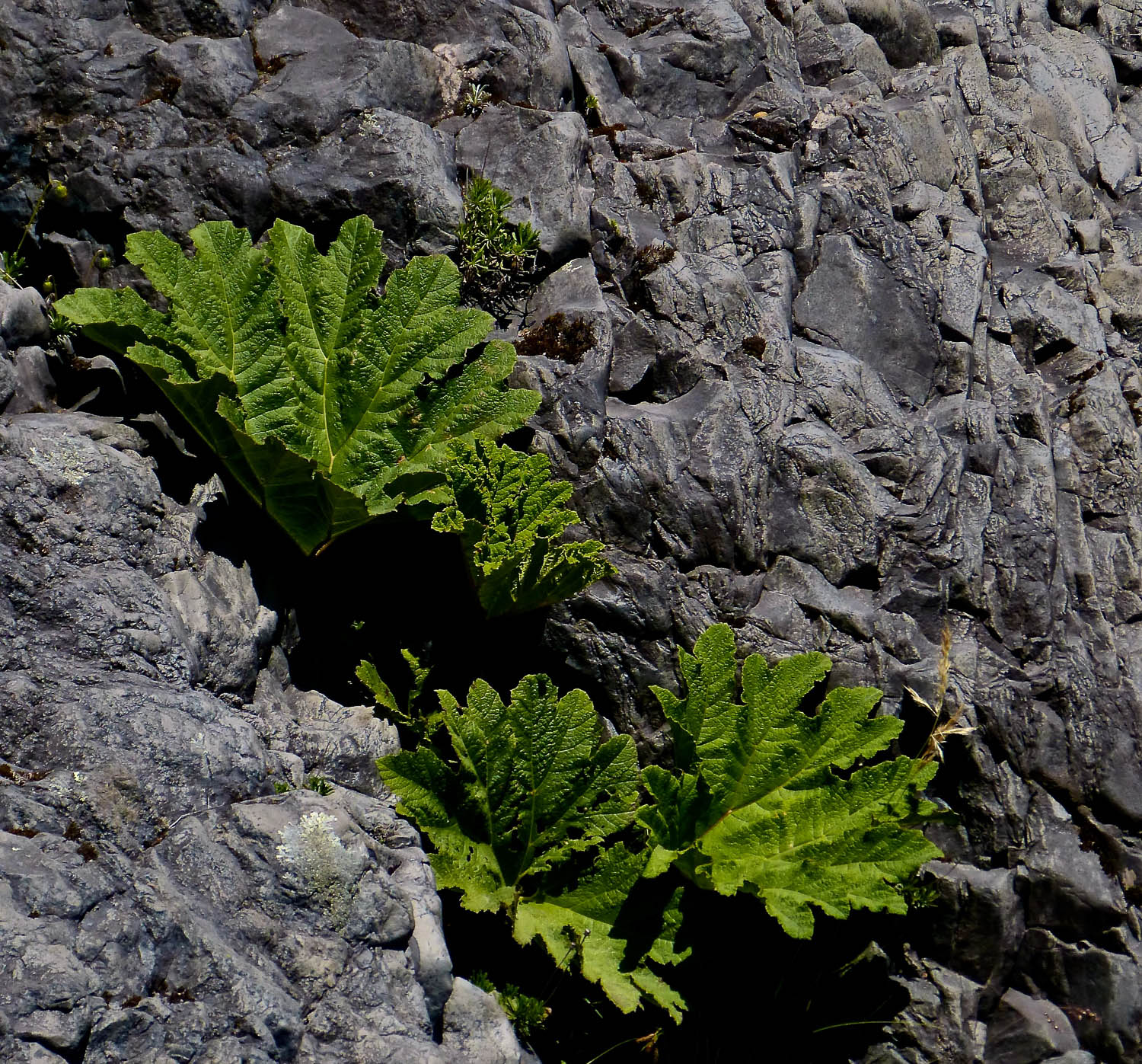 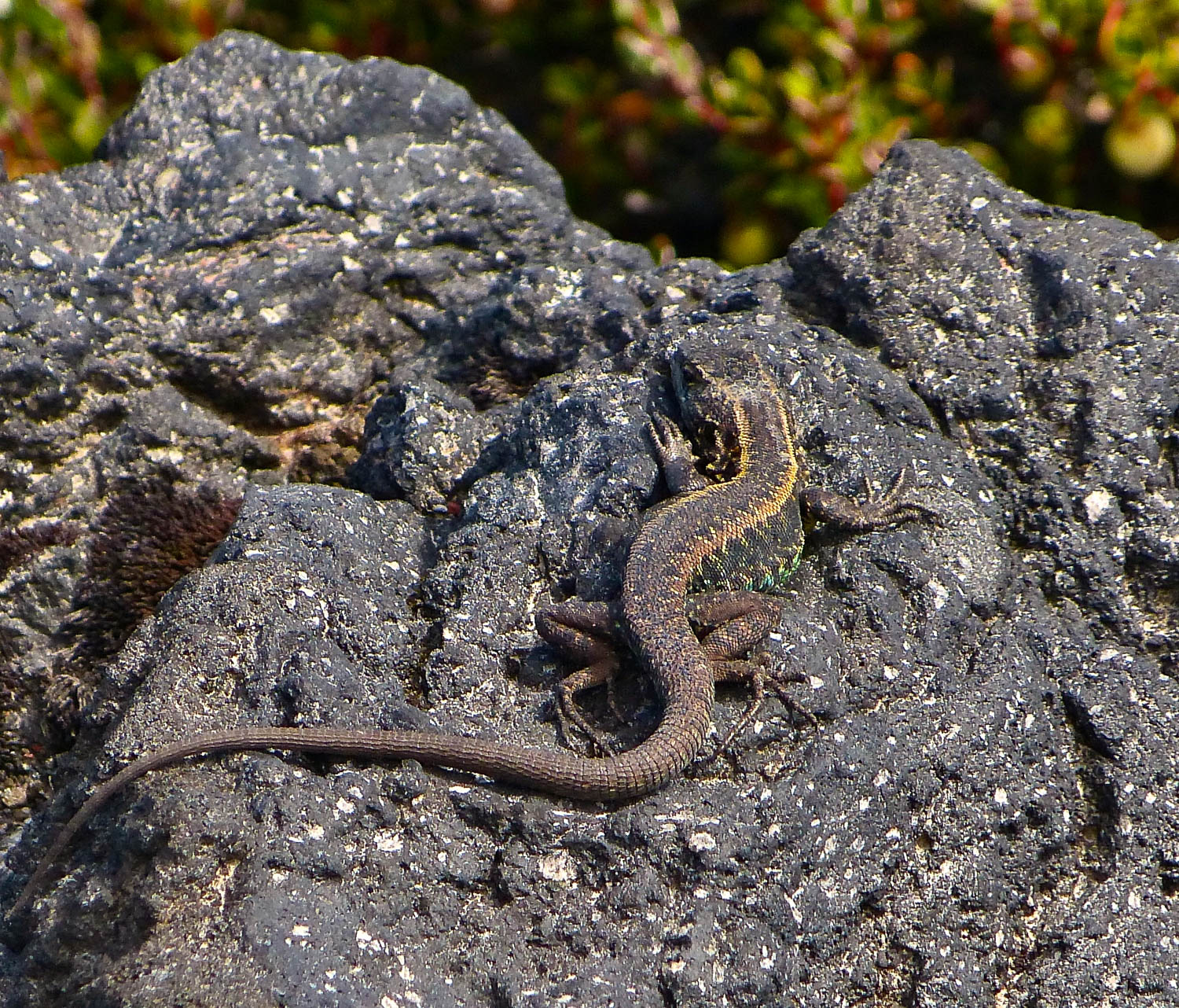 A Chilean lizard (Liolaemus chiliensis) is well-camouflaged against the colors of the lava.

In a country with hundreds of snow-capped volcanoes attracting mountaineers, I should not have been surprised to find Chile’s newest ski center gracing the slopes of Volcán Osorno. Conveniently located about 40 miles from Puerto Montt, the small ski resort has two chairlifts, three drag lifts, 12 slopes of varying levels, snowcat touring and a ski season that lasts until October. On a clear day from a high perch on the slopes you can look out at Lake Llanquihue and its surrounding towns, Volcán Calbuco, an array of Andean peaks and the Pacific Ocean. Wouldn’t Darwin be amazed!

According to local legend, the furious volcanic activity ceased after the sacrifice of Licarayen, a virgin Mapuche princess: a great bird flew down, snatched her heart, and threw it into the crater of Osorno. Today, that so-called appeasement and tranquility persists, allowing skiers to enjoy the slopes on the southwest flank of the volcano, the diversity of which, according to veteran ski enthusiast and fly fishing guide Francisco Castaño, sets the Volcán Osorno Ski Center apart from South America’s other ski areas. 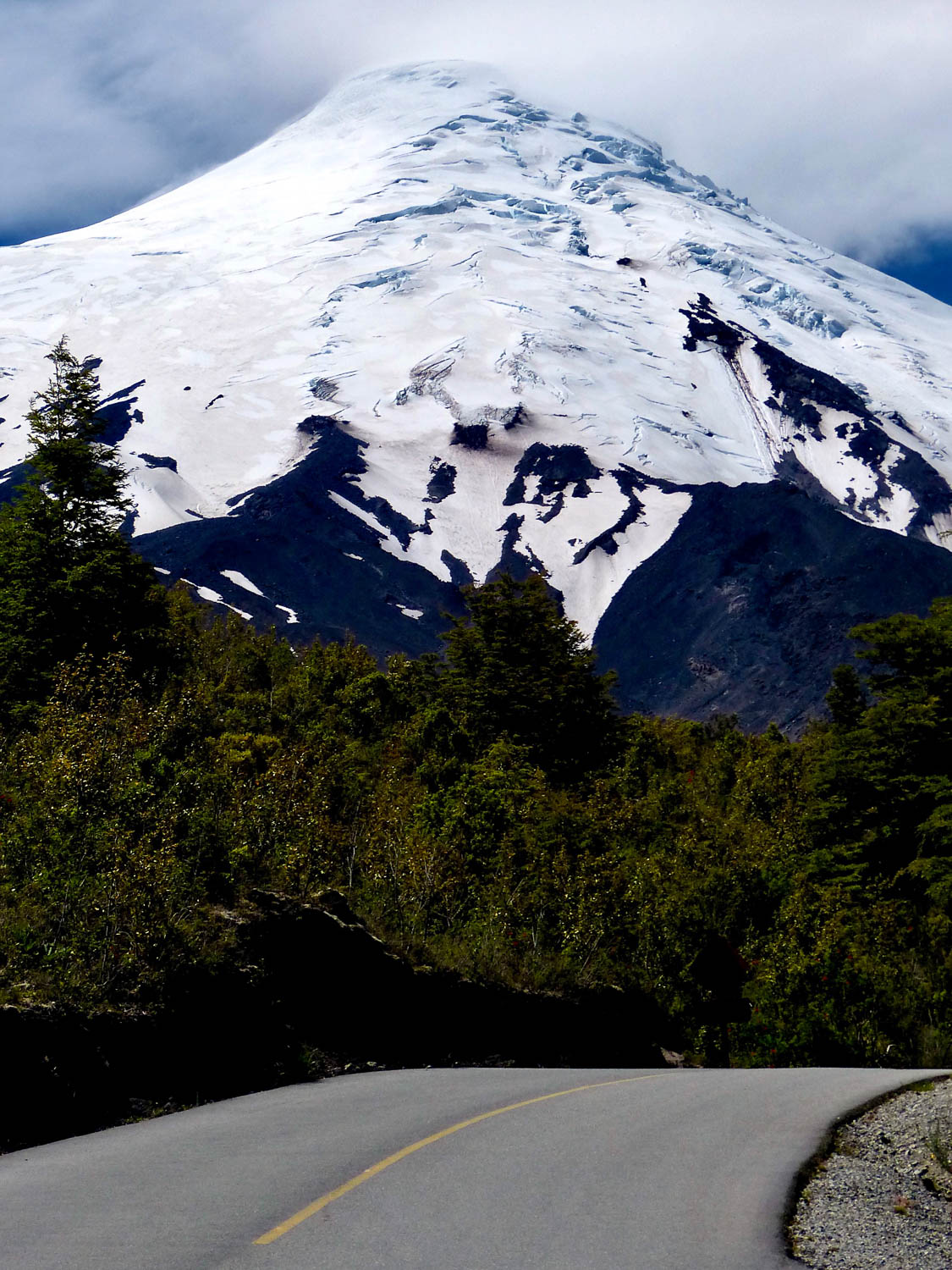 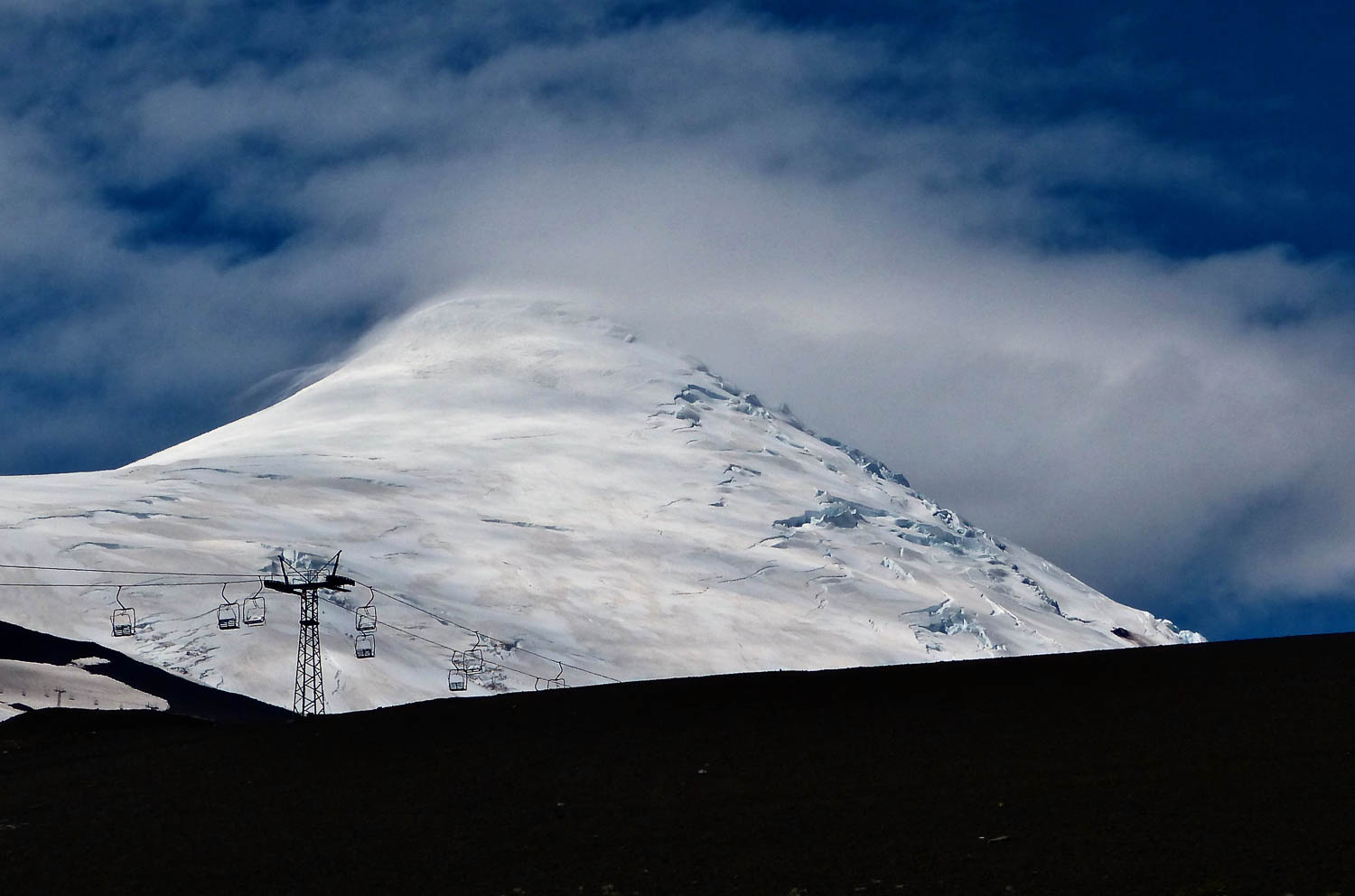 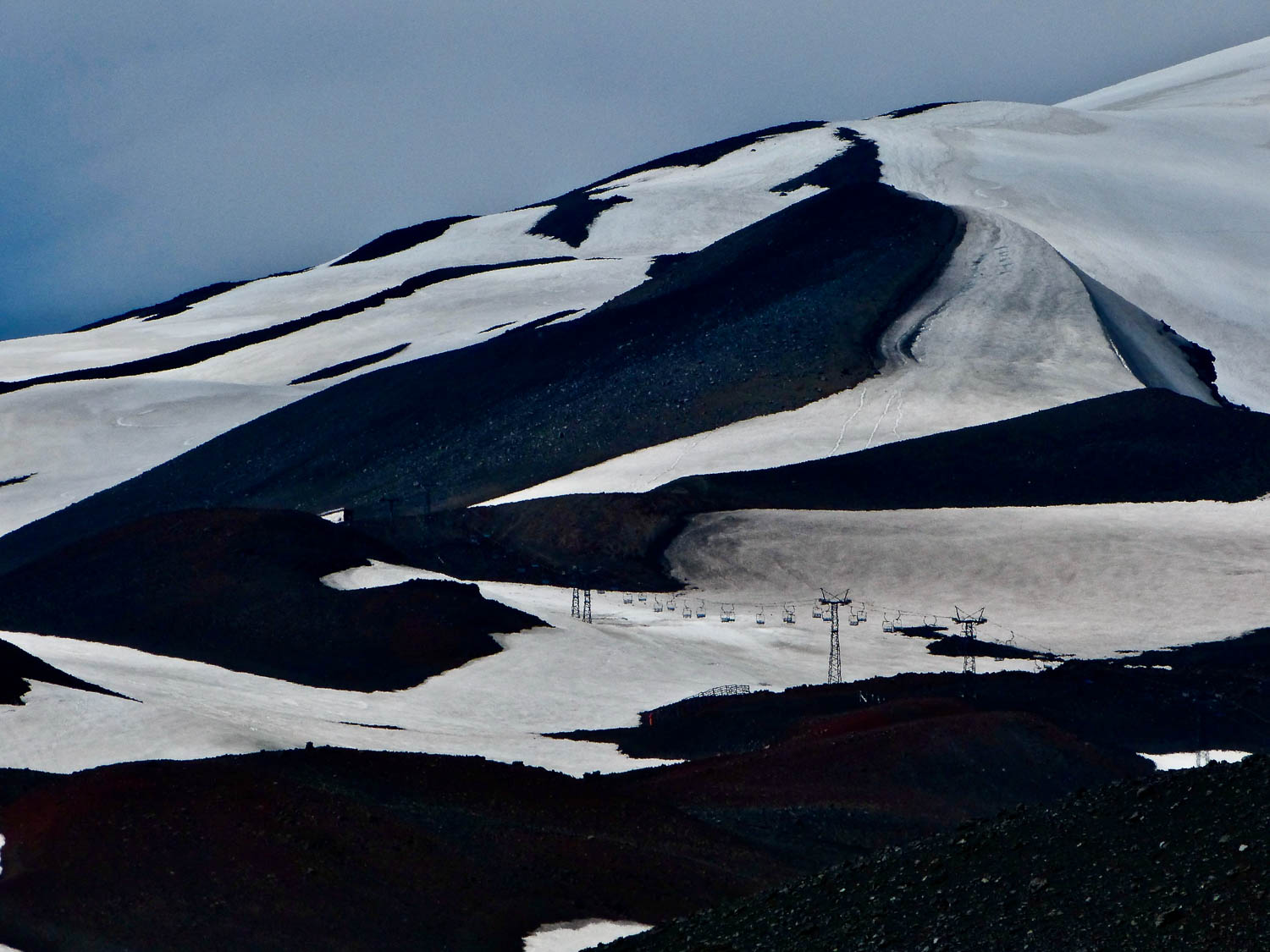