Rock carries its own epithets,
Its own refrains. 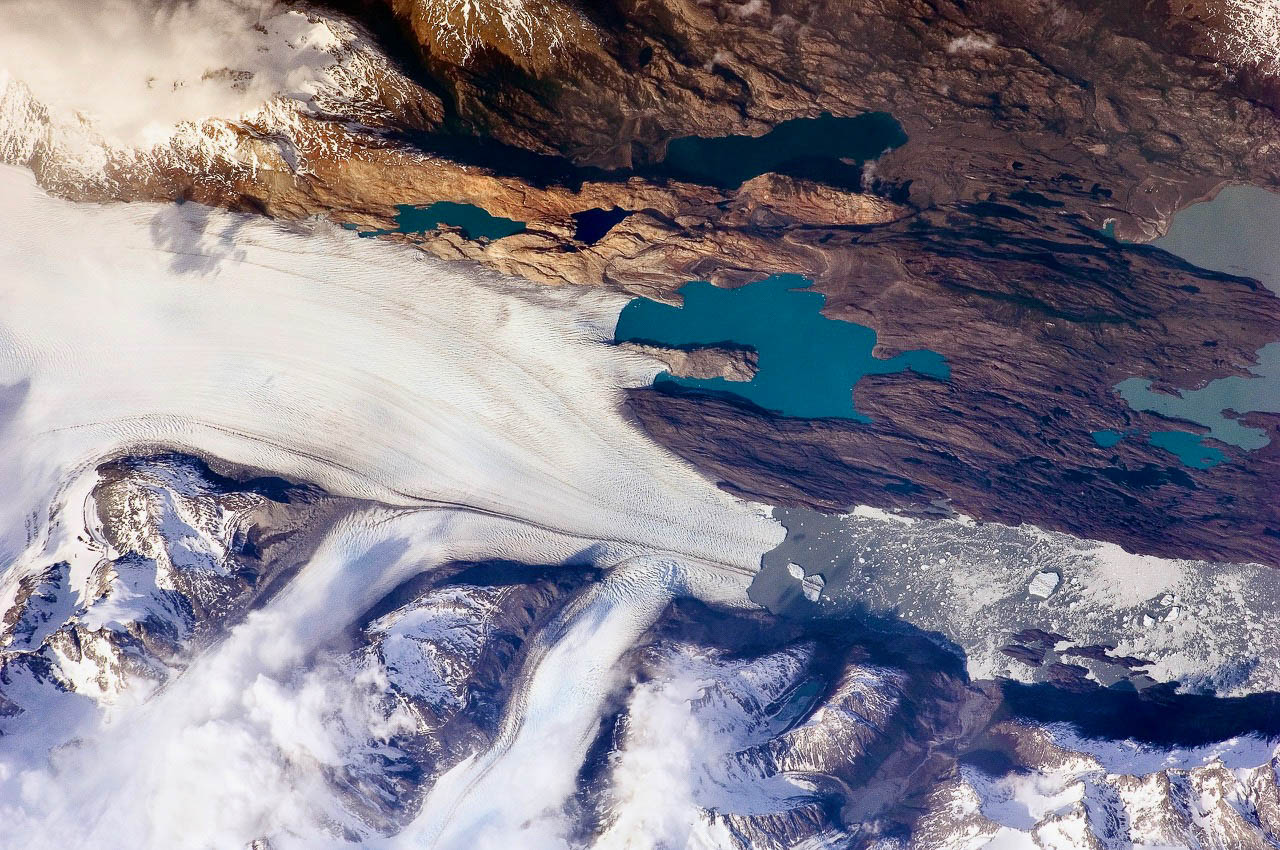 Photo Credits: This 2009 photograph is courtesy of NASA’s Earth Observatory archives. You are looking down from space on the Upsala Glacier and its three glacier tributaries (Bertacchi, Cono and Murallón). Along the top of the image, paralleling the Upsala Glacier, you can see Cañadon de los Fosiles (Fossil Canyon) and its turquoise-hued, glacial meltwater lakes. The Upsala Glacier is one of the most rapidly retreating glaciers in the Patagonian Icefield and the glacier’s terminal position during our visit in late 2010 revealed much more exposed bedrock than you see in the upper left corner of the 2009 aerial view.

ePostcard Dedication: To my dear friend and mentor, Dave Armstrong, whose superb course in the history of biology, Darwinian Revolution, helped me understand the importance of multidisciplinary perspectives in exploring the wonders of the natural world.

Earth’s life history is written, quite literally, in stone. Rocks reveal glimpses of deep time—a geologic saga of epic proportions and enduring fascination. Geologists are trained to “read the rocks,” gathering the evidence they need from rocks and fossils to write scientific narratives well grounded in geologic time. These narratives now include gothic tales of cataclysmic fires deep within the Earth, the breakup of ancient supercontinents, the birth of oceans, colossal volcanic eruptions, surging rivers of glacial ice, the reincarnation of new landscapes from old through recycling, and the evolution of new forms of life in the sea and on land. When I explore a landscape that is new to me, I try to envision the landforms, rock outcrops and stratigraphic layers I see as chapters in Earth’s autobiography—a marvelously idiosyncratic journal of geologic history that is utterly unique to our planet.

The three basic types of rocks we see—igneous, metamorphic, and sedimentary—preserve the details of their origins in plain view. Next time you are out hiking, pick up a rock that interests you and examine it closely, taking note of its color, texture, and any clues that might tell you how it formed. For the naturalist interested in deciphering the geologic story of any landscape, the ability to recognize differences in the origins of certain rocks gives you a jumpstart in understanding the scenery wherever you go. In the words of Chilean poet Pablo Neruda, “What can I say without touching the earth with my hands?” I absolutely agree.

For more than 4 billion years, our planet has endured meteorite impacts, tectonic upheavals, continental crust reorganizations, and climate changes — consistently exhibiting a remarkable resilience that suggests a dynamic and ongoing “dialog” between rocks, the oceans, the atmosphere, the biosphere, and solid Earth. Earth has been described by geoscientist Marcia Bjornerud as a “supersystem” of countless smaller, interconnected systems that revolve around the creative alchemy of rock, water, air, and life. These systems operate at spatial scales ranging from microscopic to planetary, and over time periods measured in seconds to millions of years.

We now know that human-induced changes in some of Earth’s systems equal or exceed those associated with the most devastating geologic catastrophes. Current extinction rates (numbers of species per century), probably rival those of the greatest mass extinctions of the geologic past. Rates of change in atmospheric chemistry are likewise extreme, even by geologic standards. It is becoming increasingly clear that some types of anthropogenic changes simply have no precedent in the geologic record and that we are in for a wild ride that may not end well. But Earth has many more lessons to teach us and we must humbly respect her seniority.

Before we begin our hike through time in Patagonia, let us look first at some ancient geography. It took scientists more than 100 years after Darwin’s initial observations of South American geology to discover the role of plate tectonics in the modern continental geography and mountain-building processes of our planet. As you’ll remember from previous ePostcards, the term plate tectonics describes the complex interactions of the Earth’s rigid lithospheric (crustal) plates, both oceanic and continental, as they move at varying speeds over the underlying mantle in response to deep earth processes.

Pangaea, the famous supercontinent created by complex plate collisions in late Paleozoic time (ca. 300-270 million years ago), broke apart as the modern Atlantic Ocean opened to form the supercontinents Laurasia and Gondwana. In the Southern Hemisphere, the supercontinent Gondwana, prior to its breakup during the late Mesozoic, consisted of present-day Arabia, Africa, South America, Antarctica, Australia, and the peninsula of India. Regions that were once part of Gondwana and are now separate continents provide countless examples of plate tectonic’s role in determining the global distributional patterns (biogeography) of many of the plant and animal species we see today. 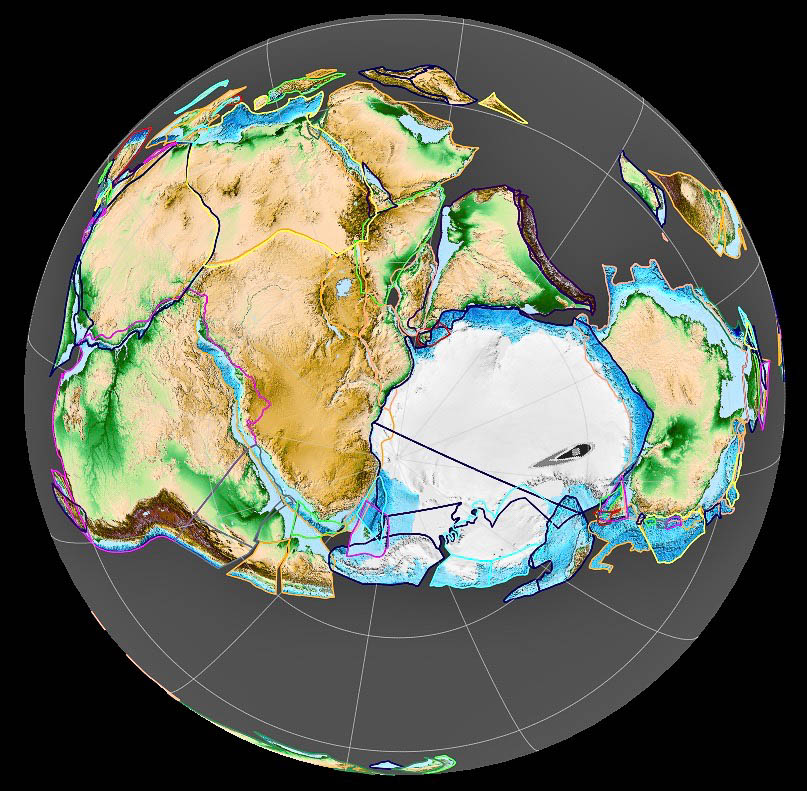 The map provided above shows the supercontinent Gondwana 420 million years ago and is centered on the South Pole. The collision of the Patagonian continental terrane with the southwestern Gondwanan edge occurred during the late Paleozoic. Subduction-related igneous rocks from beneath the North Patagonian Massif have been dated at 320–330 million years, indicating that the collision and subduction of oceanic crustal plates beneath the continental plate margin began in the early Carboniferous and lasted for about 20 million years. Gondwana gradually broke up during the late Mesozoic and those remnants make up around two-thirds of today’s continental area, including South America, Africa, Antarctica, Australia, the Indian Subcontinent, Zealandia, and Arabia.

Charles Darwin was never able to reach the eastern side of the Southern Patagonian Icefield, the vast region in the southwestern portion of Argentina’s Santa Cruz Province, which now encompasses Los Glaciares National Park. Had he done so, as you saw in the NASA image above, he would have been rewarded by a fabulous panorama of the Upsala Glacier, its three tributary glaciers, and Lago Guillermo.

Dwarfed by the towering, ice-capped peaks of the Andes, the canyon has one of the most beautiful and breathtaking settings in Patagonia. Our 9 mile hike through Cañadon de los Fosiles (Fossil Canyon) revealed at least 170 million years of geologic history, including rock layers that were once part of the supercontinents Pangea and Gondwana and seafloor rocks rich in marine fossils. Yes, marine fossils high in the Andes! I’m sure that you can can imagine Darwin’s excitement if he’d been able to explore this multilayered geologic wonderland of ebony, russet, and ochre-hued rocks displayed against a backdrop of glacially-polished outcrops resplendent with Jurassic-age ammonite and belemnite fossils. 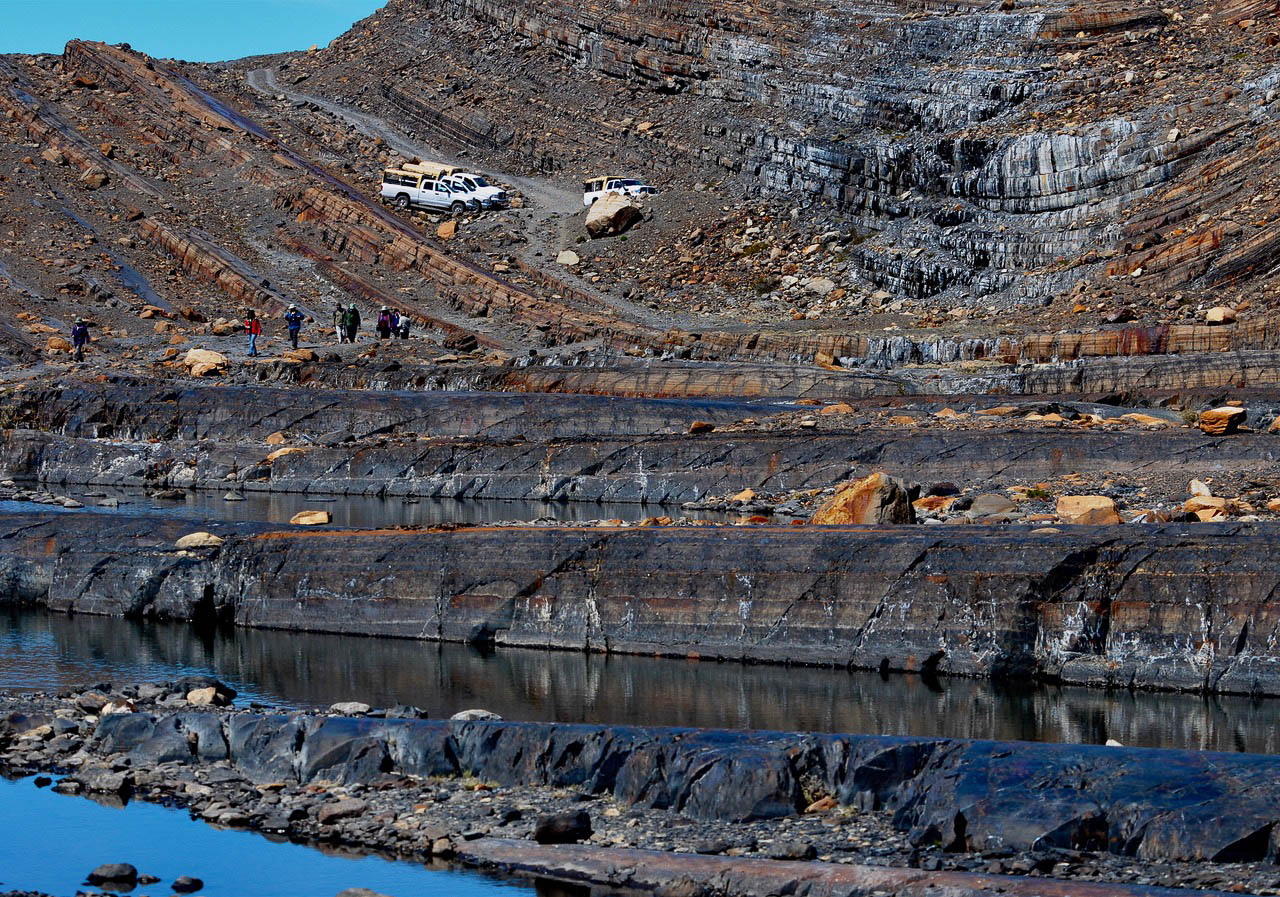 Photo Credits: All photos courtesy of Audrey DeLella Benedict (2010). Note the contorted and intersecting multilayered beds of meta-sedimentary rocks (mudstones) as we begin our hike to a view point overlooking the Upsala Glacier. 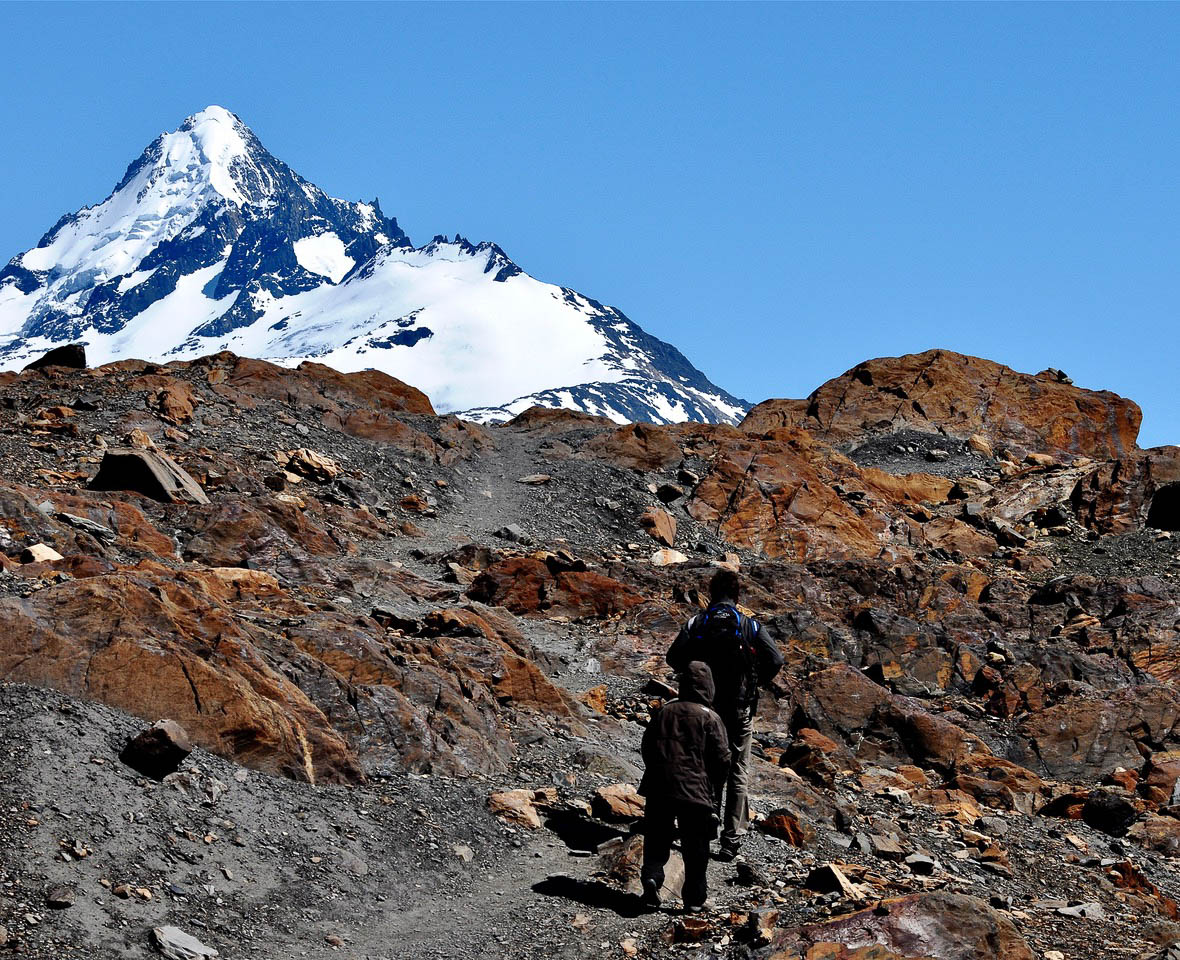 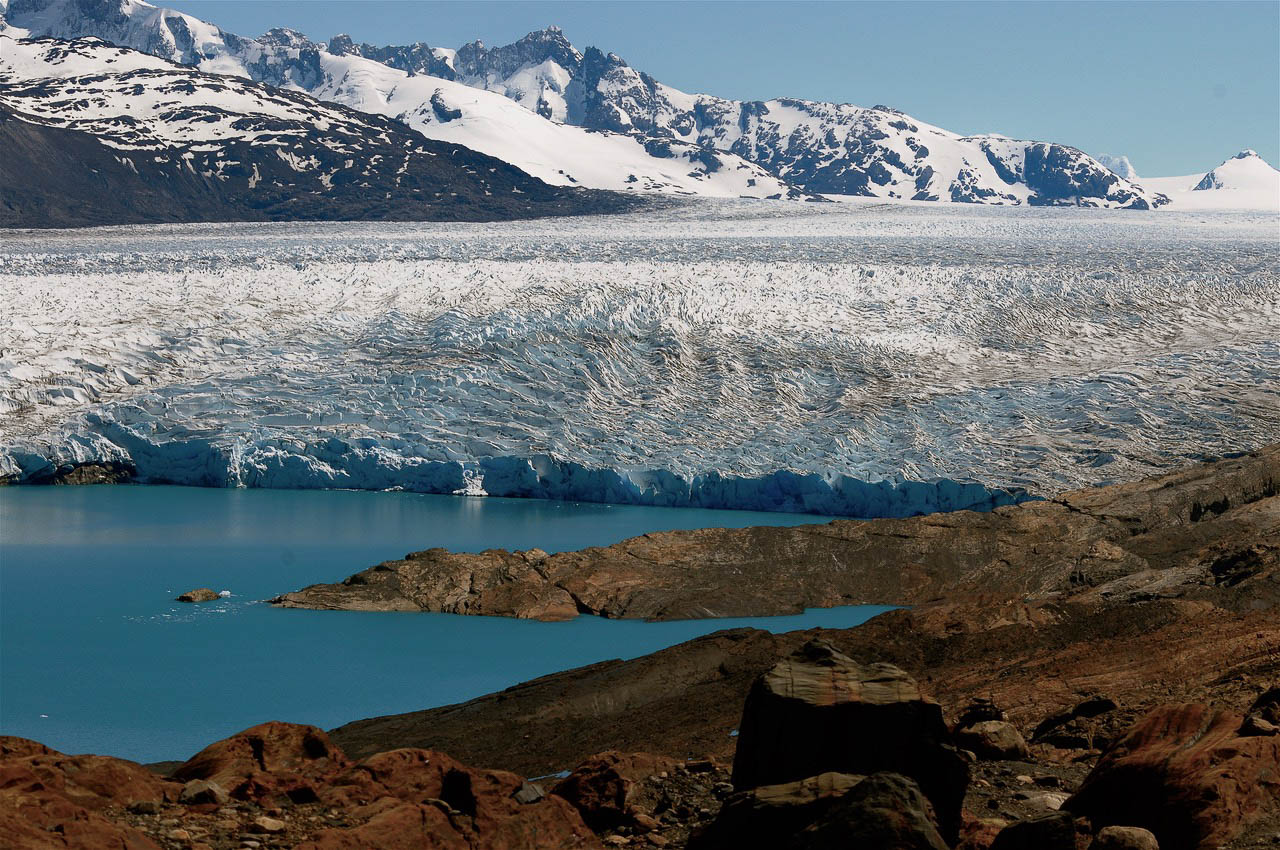 Lago Guillermo and the crevasse-riven terminus of the Upsala Glacier, one of the most rapidly retreating glaciers in the Patagonian Icefield. 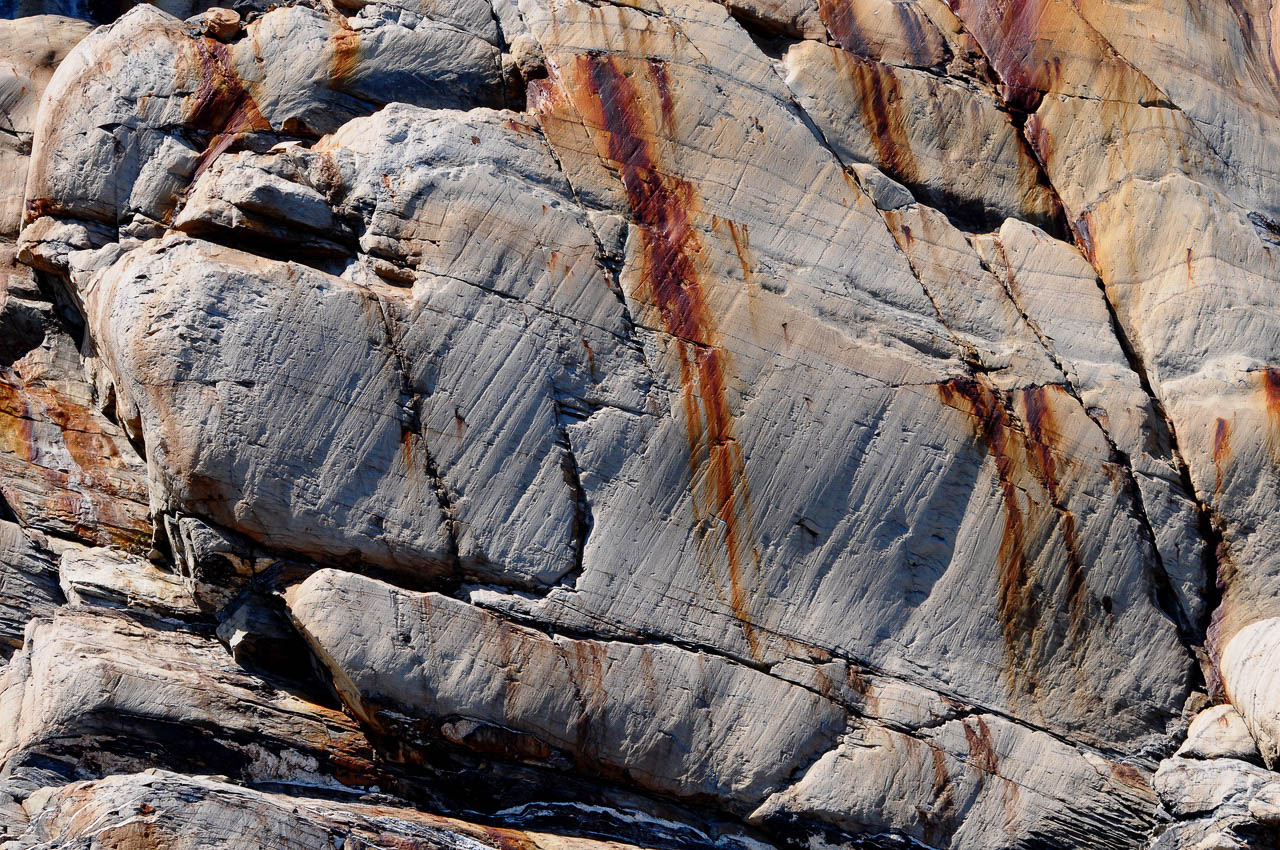 Glacially-etched striations pattern this meta-sedimentary limestone outcrop along the trail in Cañadon de los Fosiles. Limestone is composed mostly of the minerals calcite and aragonite, which are different crystal forms of calcium carbonate (CaCO3). Most limestone consists of sand-sized grains in a carbonate mud matrix. Dense, massive limestone, such as the outcrop above, is sometimes described as marble-like because of its fine texture and relative hardness when compared to less compacted varieties. 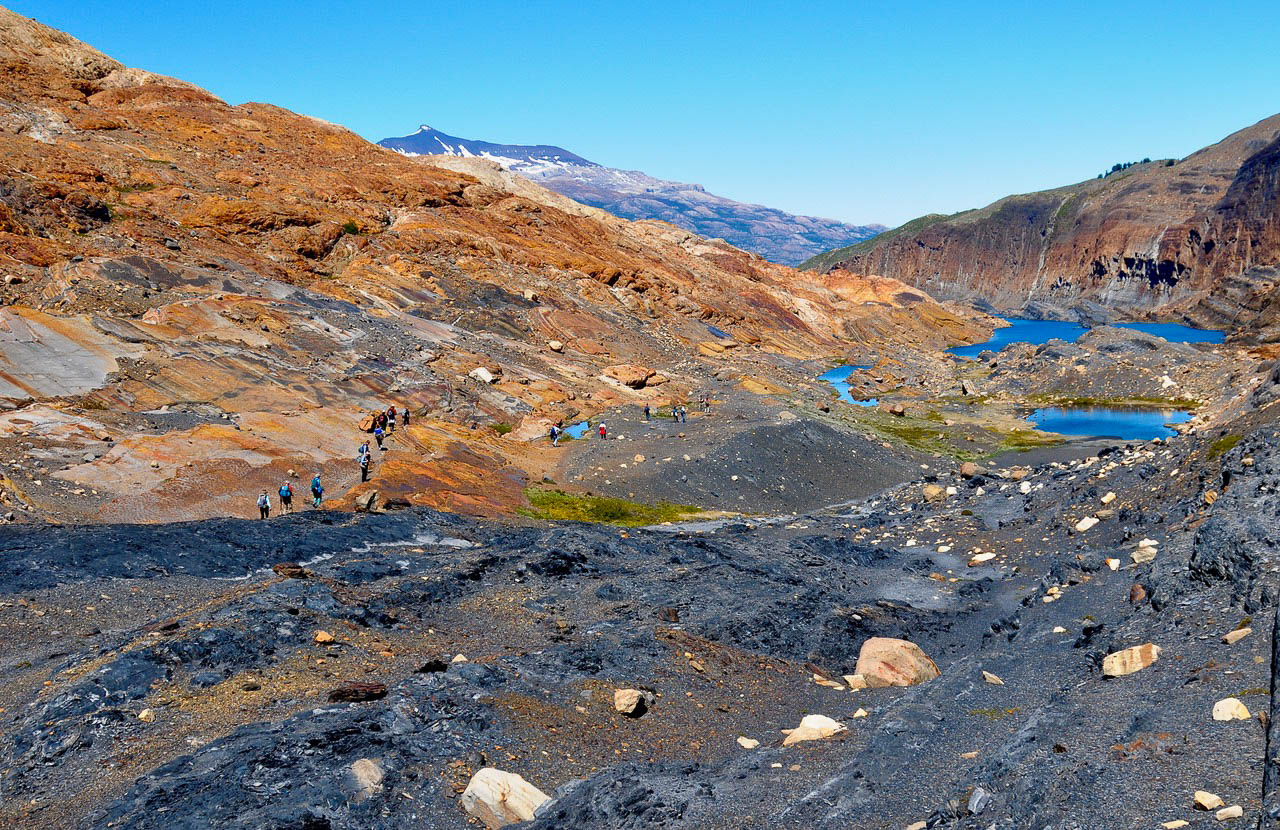 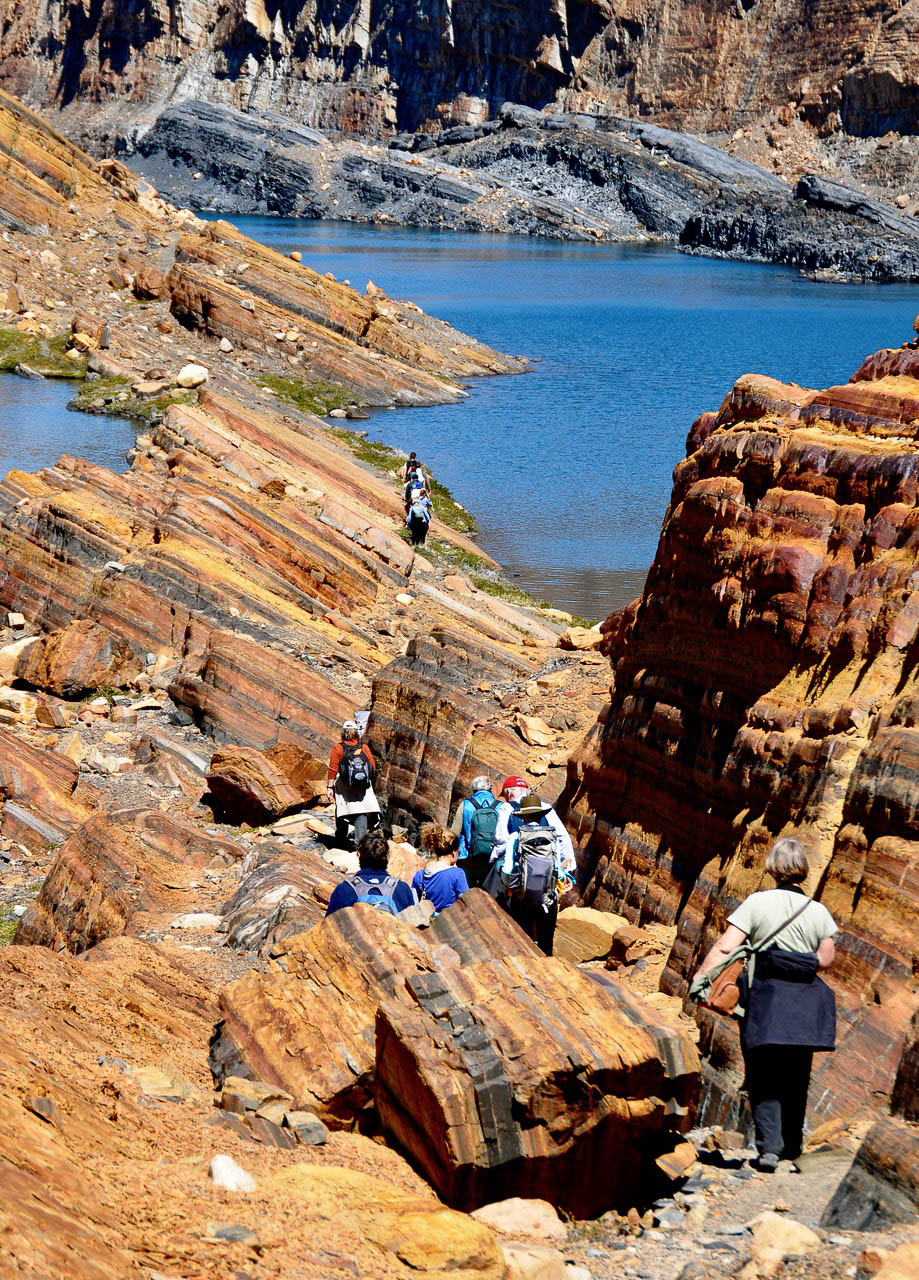 The hikers in the photos above are walking along a maze-like trail through upturned, multilayered sedimentary strata consisting of silicified sandstones, mudstones and shales. Mudstone is a common sedimentary rock with a very fine-grained texture that is sometimes referred to by various other names such as mudrock, argillite, claystone and siltstone. The term argillite is sometimes used specifically to refer to mudstone deposits that are well-formed and harder than other types of mudstones. Shale is also a type of mudstone and is typically gray to black in color, but differs from other mudstones in that is made up of visible and often friable layers.

The colors of the mudstone layers—yellow, gold, black, dark gray, and russet—reflect the original substrate’s mineral or organic content. Mudstones containing iron oxide are commonly red, orange, or yellow, while rocks rich in pyrite or carbon are black. As we hike deeper into the canyon, the dazzling stratified outcrops give way to an equally stunning array of Jurassic-age marine fossils. 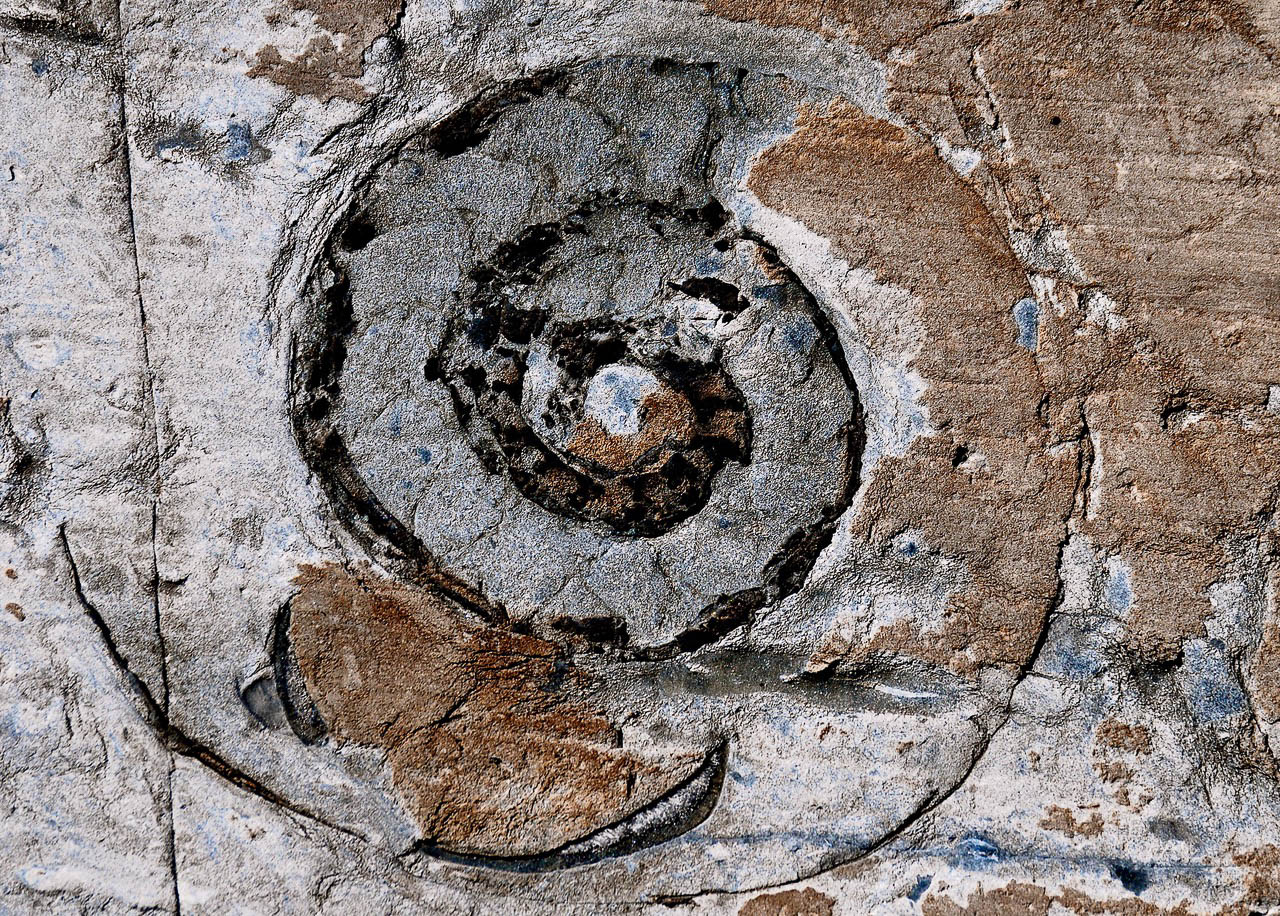 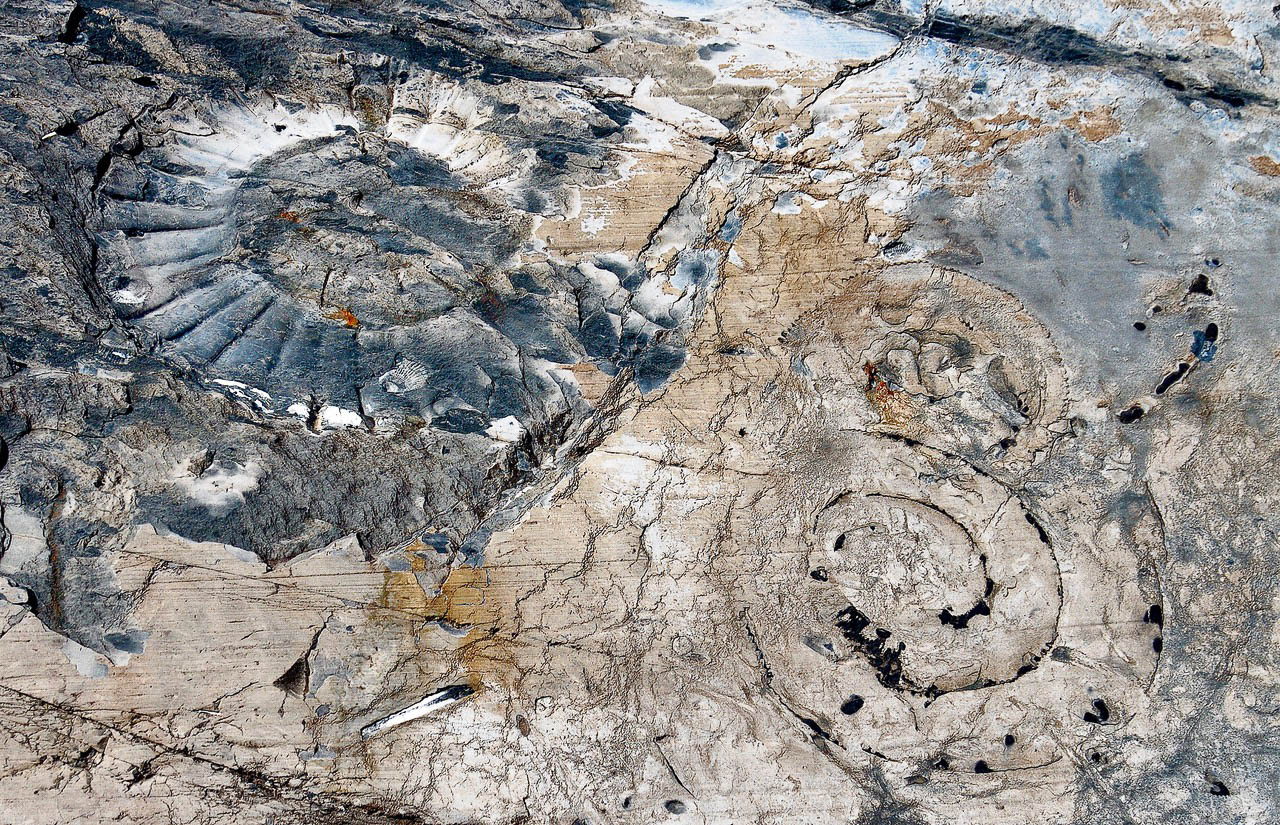 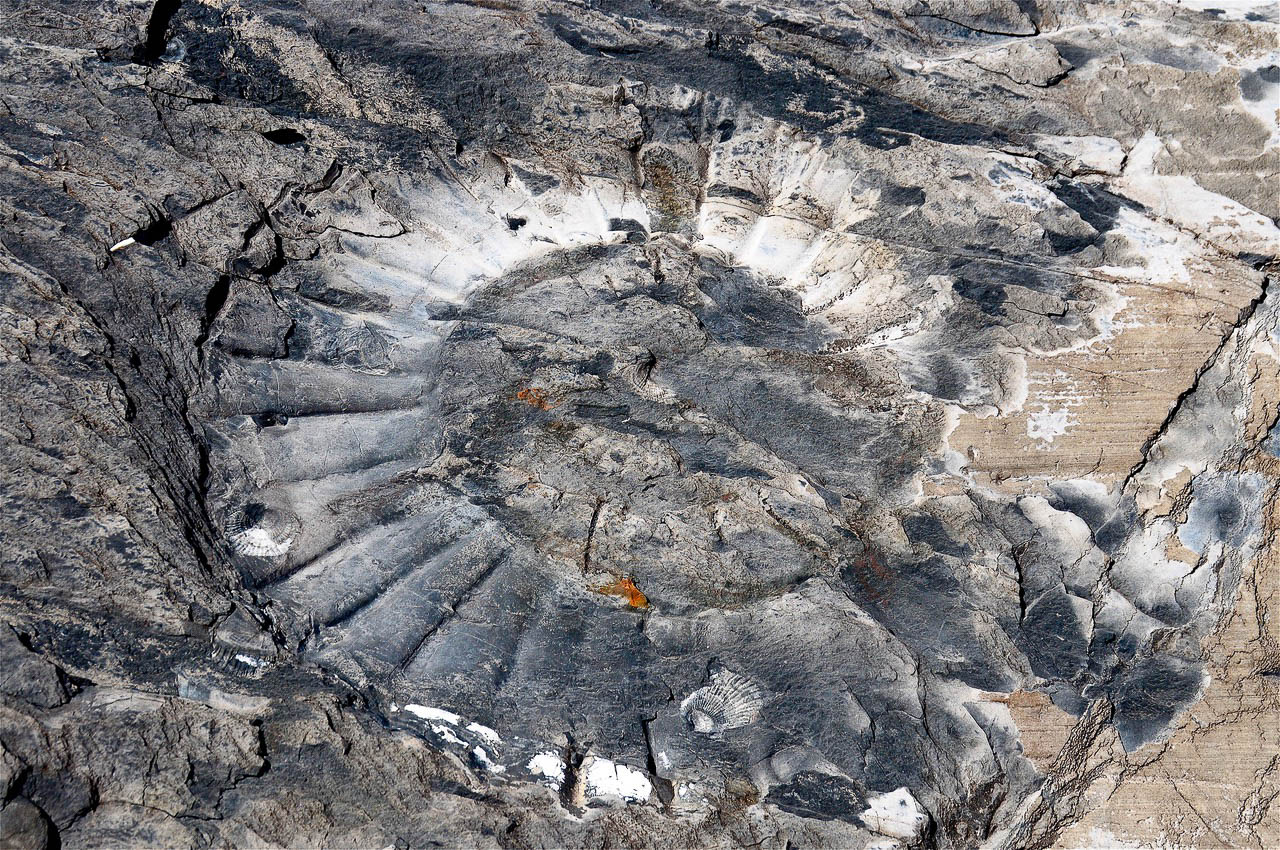 The name “ammonite” was inspired by the spiral shape of their fossilized shells, which somewhat resemble tightly coiled rams’ horns. Ammonites and belemnites are extinct mollusks and among the most common marine invertebrate fossils in the Mesozoic (Jurassic and Cretaceous) faunal record; together, these fossils represent a time interval of about 135 million years. Ammonites (phylum Mollusca, class Cephalopoda, and subclass Ammonoidea) are more closely related to living octopuses, squid and cuttlefish than they are to shelled nautiloids such as the living Nautilus species. Ammonites first appear in the fossil record around 400 million years ago (Devonian) and became extinct at the end of the Cretaceous (65 million years ago).

These beautiful mollusks most commonly formed a spiral chambered shell, with the ammonite living in the newest and largest chamber. Their shells ranged in width from less than an inch to more than 3 feet. The majority of ammonite species feature a planispiral, flat-coiled shell, while some species (as in baculites) have nearly straight shells. Still other species’ shells are coiled helically, similar in appearance to some gastropods.

Many ammonoids probably lived in the open water of ancient seas, rather than at the sea bottom, because their spiral-shaped fossils are often found in rocks laid down under conditions where no bottom-dwelling life is found. Many spiral-shelled ammonoid species were thought to have been good swimmers and capable predators, while species with flattened, discus-shaped, streamlined shells, were probably less effective swimmers and were likely to have been slow-swimming bottom-dwellers. Some ammonite fossils have the remains of isopod and mollusc larvae in their buccal cavity, indicating a possible plankton diet. We now know that some ammonoid species may have avoided predation by squirting ink, much like modern cephalopods; ink is occasionally preserved in fossilized ammonites. 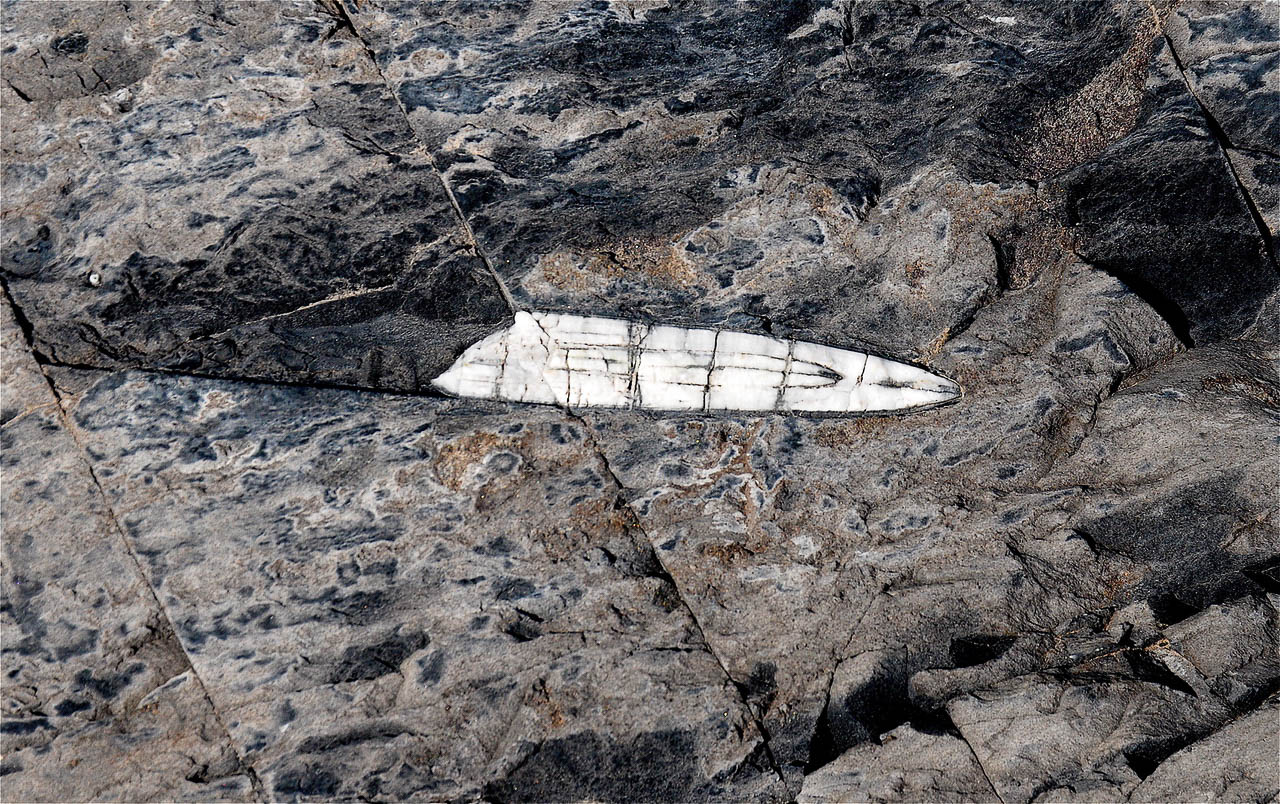 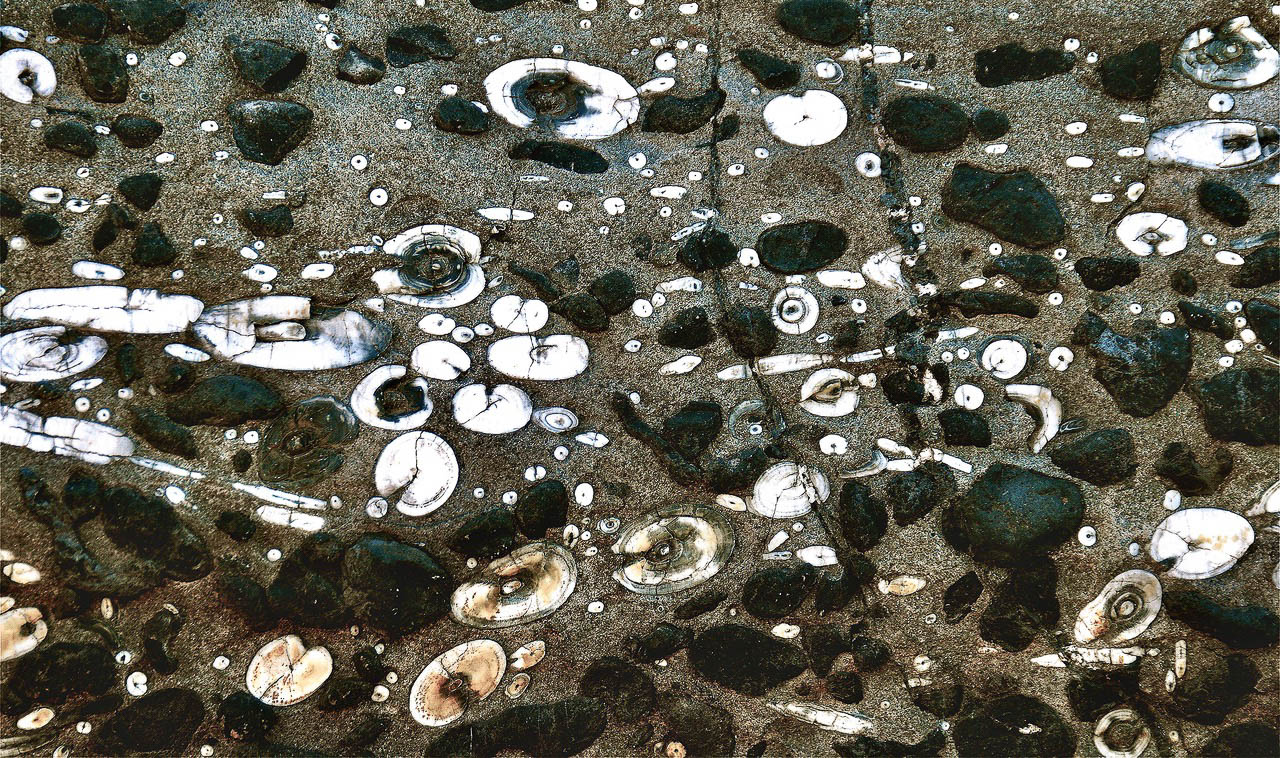 Belemnites are extinct marine invertebrates that also belong to the phylum Mollusca and the class Cephalopoda, a group that includes squid and octopuses. These invertebrate animals had a squid-like body but, unlike modern squid, had a hard internal skeleton that formed an aerodynamic, bullet-shaped feature called a guard (or rostrum). This white and distinctively-shaped structure is the most commonly found belemnite fossil. The belemnite’s calcitic guard provides paleontologists with information on the climate, habitat, and the carbon cycle of the ancient waters that they inhabited. Belemnites, in life, are thought to have had 10 hooked arms and a pair of fins on the guard. The chitinous hooks were usually no bigger than 0.20 inches (5 mm), and a belemnite could have had between 100 and 800 hooks in total, using them to stab and hold onto prey.

Belemnites were also an important food source for many Mesozoic marine creatures, both the adults and the planktonic juveniles, and likely played an important role in restructuring marine ecosystems after the Triassic–Jurassic extinction event. They may have laid between 100 and 1,000 eggs. Some species may have been especially adapted for speed and swam in the turbulent open ocean, whereas others resided in the calmer littoral zone (nearshore) and fed off the seafloor. The largest belemnite known (Megateuthis elliptica), had guards of 24 to 28 inches in length.