When I view all beings not as special creations, but as the lineal descendants of some few beings which lived long before the first bed of the Cambrian system was deposited, they seem to me to become ennobled.

CHARLES DARWIN, On the Origin of the Species 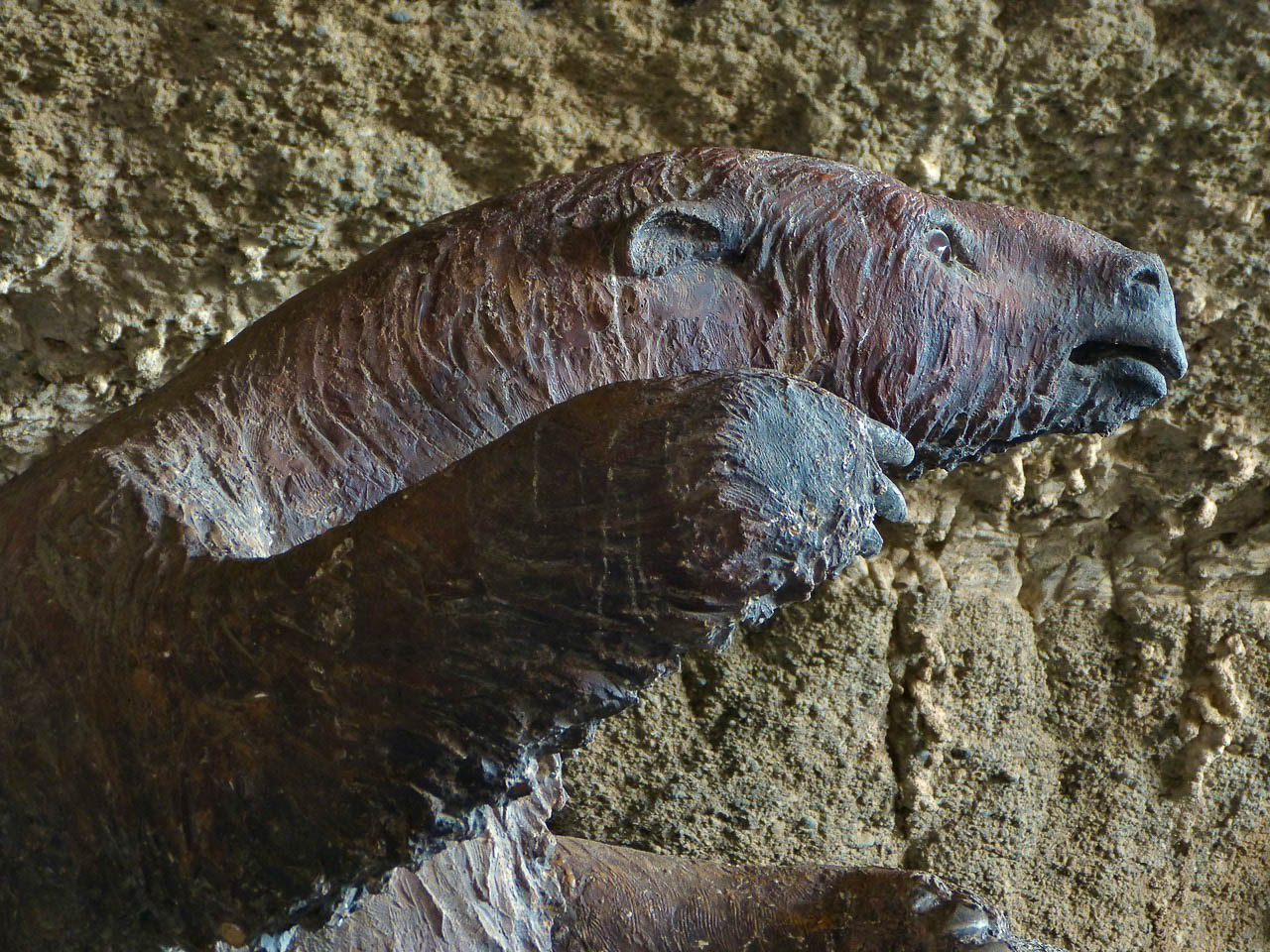 Photo Credits: All photos courtesy of Audrey DeLella Benedict except where specifically noted.

One group of fossil bones at Punta Alta stood out for Darwin, who initially identified them as belonging to the same family as the modern sloths. These bones included a nearly complete lower jaw with teeth (shown below). Darwin later shipped the skull to the Royal College of Surgeons in London, where it was examined by anatomist Richard Owen, the future founder of England’s Natural History Museum. Owen formally described the extinct mammal in 1839 as a new species of giant ground sloth, naming it Mylodon darwinii in honor of its discoverer.

The genus name “Mylodon” is a combination of the Greek words mylo and odous, meaning “molar” and “tooth,” respectively. The full scientific name translates literally as “Darwin’s Molar Tooth”, a possible reference to the uniform morphology of the sloth’s molar teeth. Darwin’s Sloth is one of the earliest ground sloths to be described, after Megatherium (Cuvier 1796) and Megalonyx (Cuvier 1825), and is the namesake for the family Mylodontidae. The discovery of Darwin’s Sloth is considered one of the naturalist’s most significant scientific achievements. 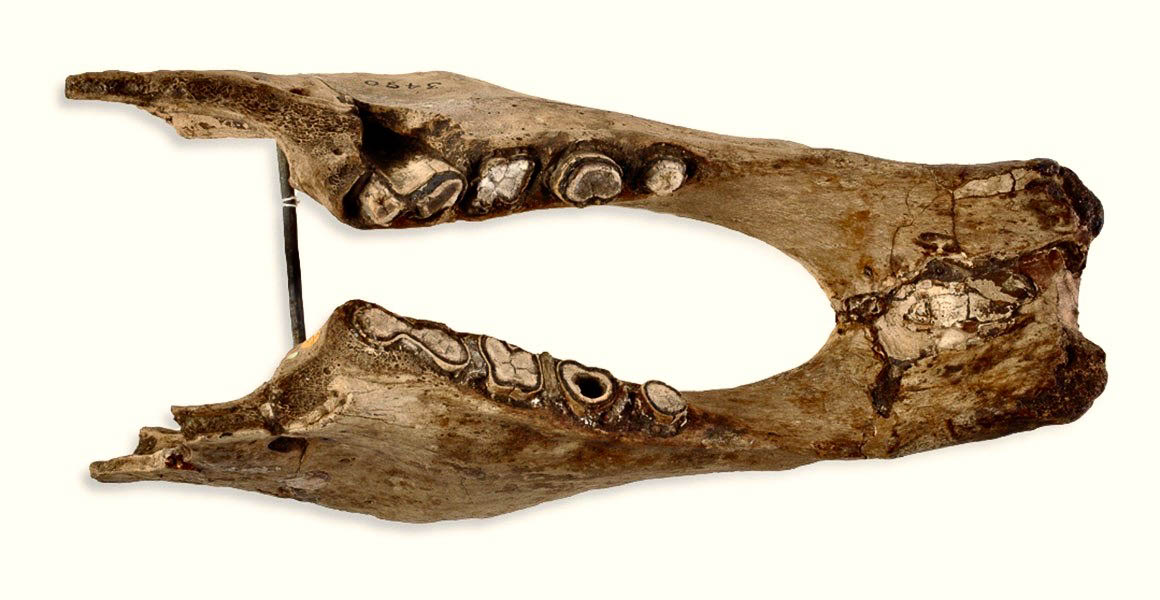 Photo Credit: Courtesy of the Natural History Museum at South Kensington. The holotype specimen of Mylodon darwinii was collected by Charles Darwin in 1832 at Punta Alta in Argentina. Darwin’s Sloth is best known from exceptionally well-preserved remains found in caves during the late 19th century in southern Chile, the most famous of those being Cueva del Milodón Natural Monument. 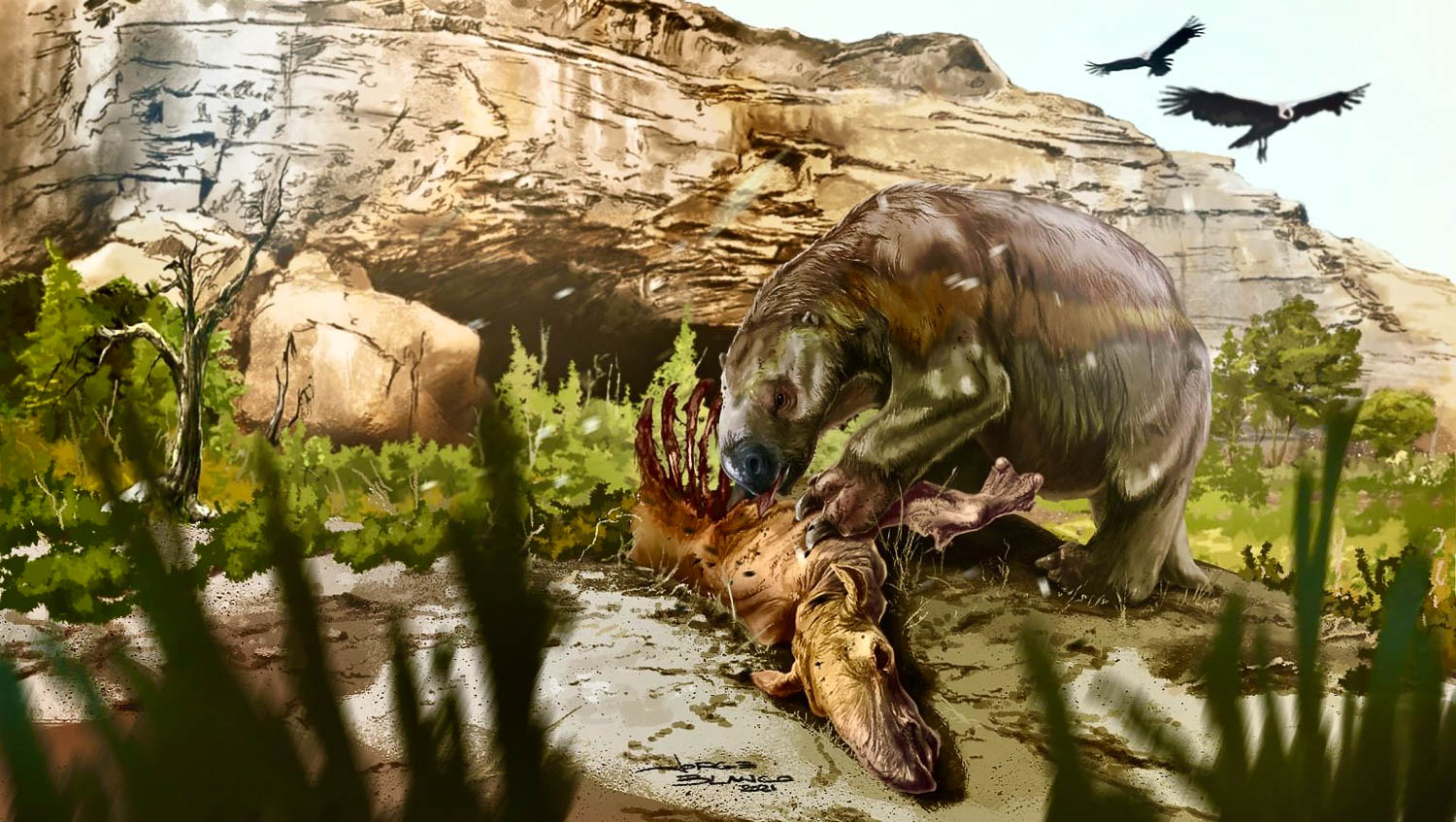 Artist’s Credit: Courtesy of artist Jorge Blanco and Earth Institute (Columbia Climate School.) The backdrop for the artist’s imagined scene (circa 12,000 years ago) is Cueva del Milodón in southern Chile. It shows Darwin’s Sloth feeding on the carcass of a Macrauchenia.

The giant ground sloth Mylodon lived during the Pleistocene epoch, between 1.8 million years and 12,000 years ago. The remains of Darwin’s Sloth have been found throughout South America, from Bolivia in the north to southern Patagonia, which suggests that the species was able to adapt to cold climates. Animals found in association with Darwin’s Sloth are indicative of grassland, savanna, or open woodland habitats with ready access to water. The giant sloths shared these habitats with such strange creatures as gomphotheres (Stegomastodon), deer (Morenelaphus and Antifer), notoungulates (Toxodon), litopterans (Macrauchenia), horses (Hippidion and Equus), and other giant ground sloths (Megatherium). Possible predators of Darwin’s Sloth included jaguar (Panthera onca) and southern sabertooth (Smilodon populator).

Darwin’s Sloth is exceptionally well known thanks to the preservation of its bones, pieces of skin and fur, and dung from several cave sites in Argentina, Bolivia and Chile. These remains were so well-preserved, in fact, that they were initially thought to be from recently dead animals. This mystery inspired several expeditions into the remote reaches of South America in hopes of finding a living example of the species, an effort which ultimately ended in failure.

One of the most important of those caves, Cueva del Milodón Natural Monument, is located along the flanks of Cerro Benitez in the Magallanes Region of Chilean Patagonia, near Puerto Natales and Punta Arenas. The monument comprises a group of several caves in a rock formation called Silla del Diablo (Devil’s Chair). The largest cave in the monument is the 660-foot long Milodón Cave, which was discovered in 1895 by Hermann Eberhard, a German explorer of Patagonia. He found a large, seemingly fresh piece of skin of an unidentified animal. In 1896, the cave was also explored by Otto Nordenskjöld and it was later recognized that the skin that Eberhard discovered was that of the extinct giant ground sloth known as Darwin’s Sloth (Mylodon). In addition to Darwin’s Sloth, the fossil record in the caves reveals the presence of several extinct Pleistocene mammals, including the “Dwarf Horse” Hippidion, the saber-toothed cat Smilodon, and the litopteran Macrauchenia. 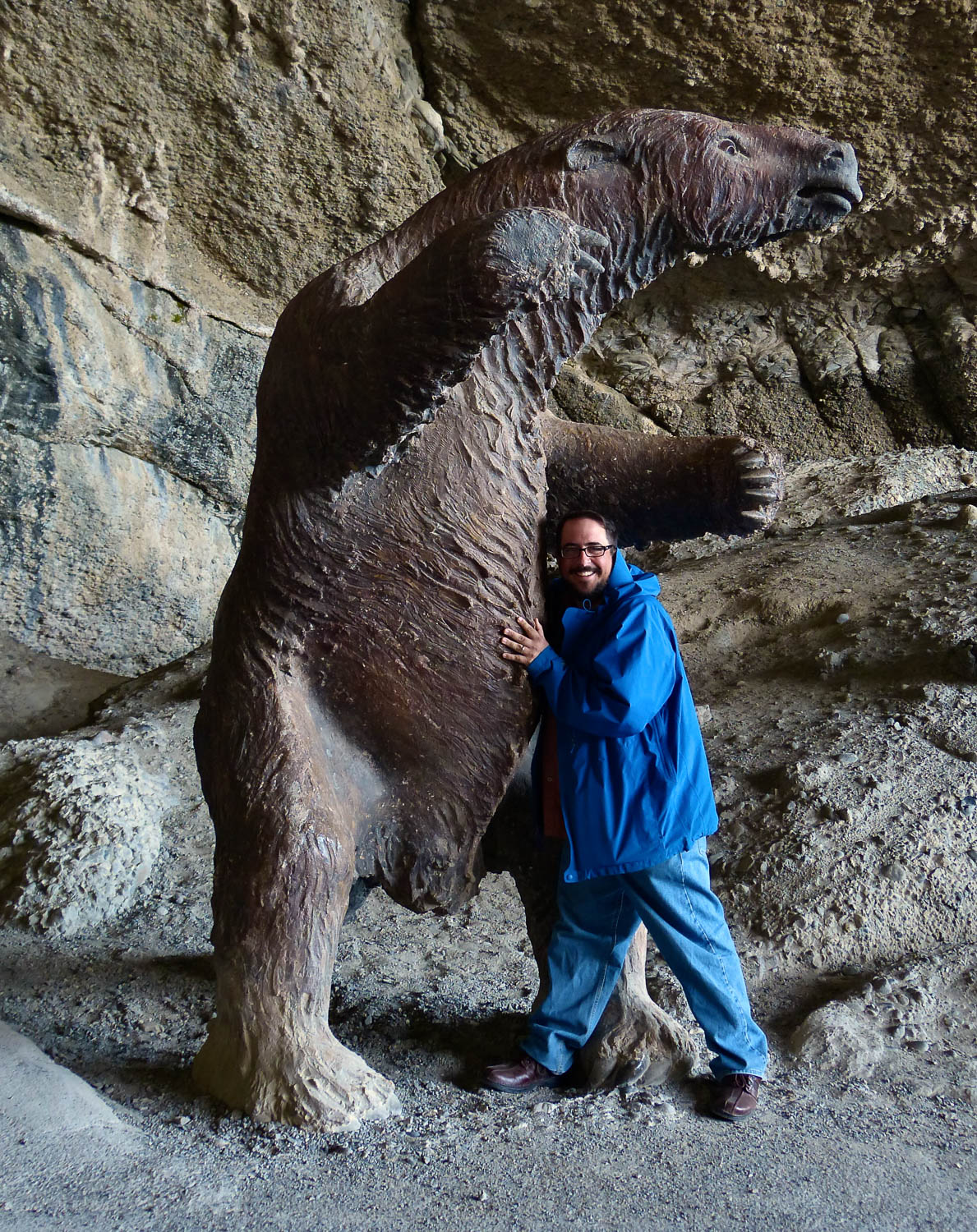 At the entrance of Cueva del Milodón Natural Monument visitors come face to face with a life size replica of Darwin’s Sloth, the giant ground sloth that Darwin first discovered at Punta Alto, Argentina. CSU archeologist Jason LaBelle obliged us by providing a sense of scale for this extinct mammal, which superficially resembles a large bear. Darwin’s Sloth was slightly smaller than some of its larger relatives, averaging about 10 feet in length and tipping the scales at about 2 tons.

Much is known about the appearance and ecology of Darwin’s Sloth thanks to exceptionally well preserved bones and soft tissue remains recovered from dry caves, and most notably from Cueva del Milodón. In addition to bones, a complete pelt, claw sheaths, and dung belonging to this species were recovered from Cueva del Milodón Thanks to these collections, we know that Darwin’s Sloth was covered in thick, reddish-blond fur. Analysis of its foot bones suggests that the fossorial (digging) capabilities of this ground sloth were moderate when compared to other mylodontid sloths and the naturalist’s namesake may have renovated abandoned burrows from other animals rather than excavating its own.

We know from archeological evidence that Darwin’s Sloth interacted with and was hunted by humans during the late Pleistocene. A preserved sloth pelt shows the telltale signs of having been removed and processed by humans. The skin itself was thick and had a network of pebble-like osteoderms embedded within it. Whether or not humans actually killed this sloth is unknown, but the skinning of such an animal was undoubtedly difficult due to the thickness of the skin and the embedded network of osteoderms (small pieces of bone), which must have served a protective function similar to chainmail and were probably a defense against predators. This may be the reason the pelt was ultimately left in the cave and not taken by those who processed it. Some bones of Mylodon darwinii show evidence of tooth marks, probably made by jaguars. 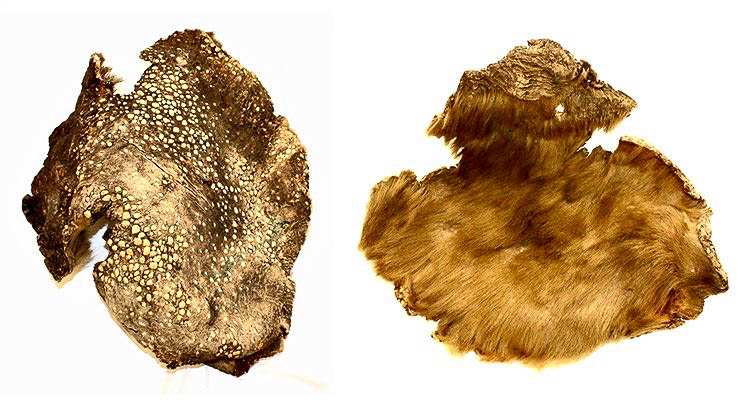 Photo Credit: Courtesy of the Natural History Museum of London. This photograph shows a piece of skin of Mylodon darwinii collected from Mylodon Cave. The first view shows the underside of the thick skin, which is is embedded with bone bits (osteoderms). The second view is shows the giant sloth’s luxuriant blond fur.

Modern sloths are tree dwellers (arboreal), move at a slow pace and eat a vegetarian diet—but the same thing can’t be said for their extinct relative, Mylodon. There are only six sloth species alive today, and all of them can be found living in the trees of tropical rainforests in Central and South America. But ancient ground sloths had a distinctly different lifestyle. Some of them reached the size of elephants and lived in a broad range of habitats, from Alaska to the tip of South America. Recent research published in the journal Scientific Reports has shown that Darwin’s Sloth, which lived in South America until about 10,000 years ago, ate meat as well as plants, which makes it an omnivore. The finding contradicts the long-standing assumption, based on the analysis of jaws, teeth, and fossilized scat, that these giant ground sloths were obligate herbivores like their modern counterparts.

The researchers in this study conducted a chemical analysis of amino acids, the building blocks of proteins, that were preserved in the hair from Mylodon specimens. When an animal eats specific foods, nitrogen isotopes become trapped inside amino acids, which then leave a trace inside body tissue, like hair or nails, and collagen, which can be found in bones and teeth. Nitrogen isotope signals can show if an animal was an herbivore, carnivore or omnivore. In this case, the analysis revealed that these giant ground sloths ate meat as well as plants. The researchers refer to the sloth as an “opportunistic omnivore,” meaning that it may have scavenged from carcasses of other animals or ingested animal protein from eggs. In addition to studying Mylodon’s hair, the researchers analyzed samples from seven species of sloth and their close anteater relatives, both living and extinct for comparison. The team also studied a wide range of modern omnivores. According to Dr. Julia Tejada, an American Museum of Natural History research associate.”Whether they were sporadic scavengers or opportunistic consumers of animal protein can’t be determined from our research, but we now have strong evidence for an omnivorous diet,”

Darwin’s Sloth, like the majority of the Pleistocene megafauna, went extinct at the Pleistocene/Holocene boundary, approximately 10,000 years ago. Fossil samples from Cueva del Milodón of bones, claws and large pieces of mummified skin covered with blond fur and riddled with osteoderms were the first non-human samples yielding genuine ancient DNA fragments. As we have just seen with the nitrogen isotope studies for determining the diets of ancient creatures, advances in sequencing technology that relies predominantly on short DNA fragments has proven to be a boon for paleobiologists. Previous mitochondrial data had suggested a close phylogenetic relationship between Mylodon and modern two-fingered sloths of the genus Choloepus.

In 2018, using a bone fragment which dates back nearly 13,000 years, Dr. Frédéric Delsuc and his colleagues teased out and reconstructed DNA fragments to obtain a high-quality mitochondrial genome and nuclear genomic information corroborating the close relationship of Darwin’s Sloth with the two-fingered sloths (Choloepus), from which it is estimated to have diverged around 22 million years ago. The much smaller, modern sloth evolved over time to inhabit trees, where it spends virtually its entire life suspended upside down.

“Our study confirms the convergent evolution of the two, tree dwelling modern sloths from two distinct lineages of extinct giant ground sloths,” says Dr. Hendrik Poinar, a lead author of the study and director of the McMaster Ancient DNA Centre and principal investigator at the Michael G. DeGroote Institute for Infectious Disease Research. “This means tree-living evolved independently, twice, which is remarkable.” Darwin would certainly have been amazed by the scientist’s research and their ability to take advantage of these cave-preserved Mylodon darwinii bone samples to produce a complete mitochondrial genome of this extinct emblematic sloth, providing insights into the sloth’s unique features and ultimate extinction. 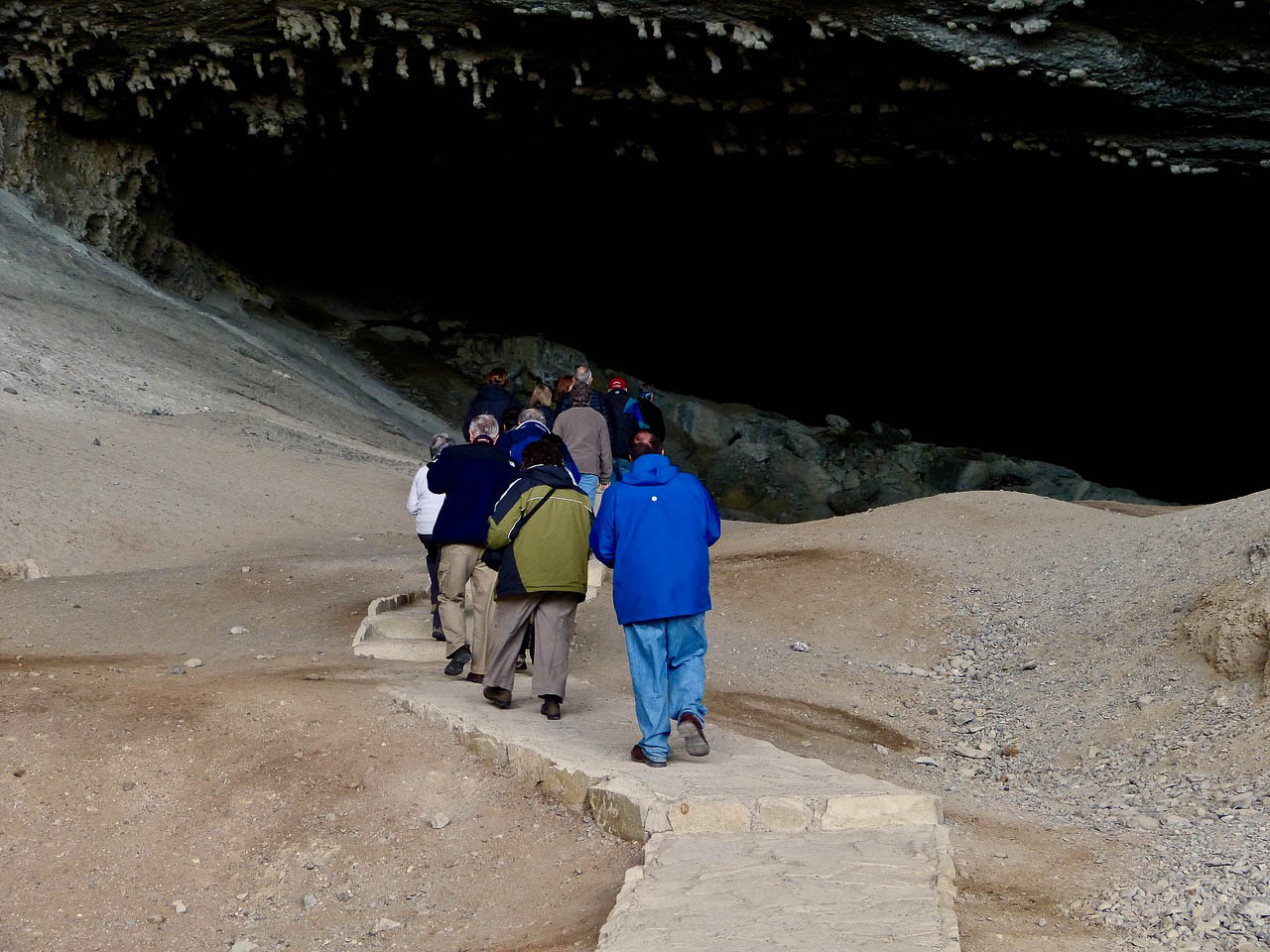 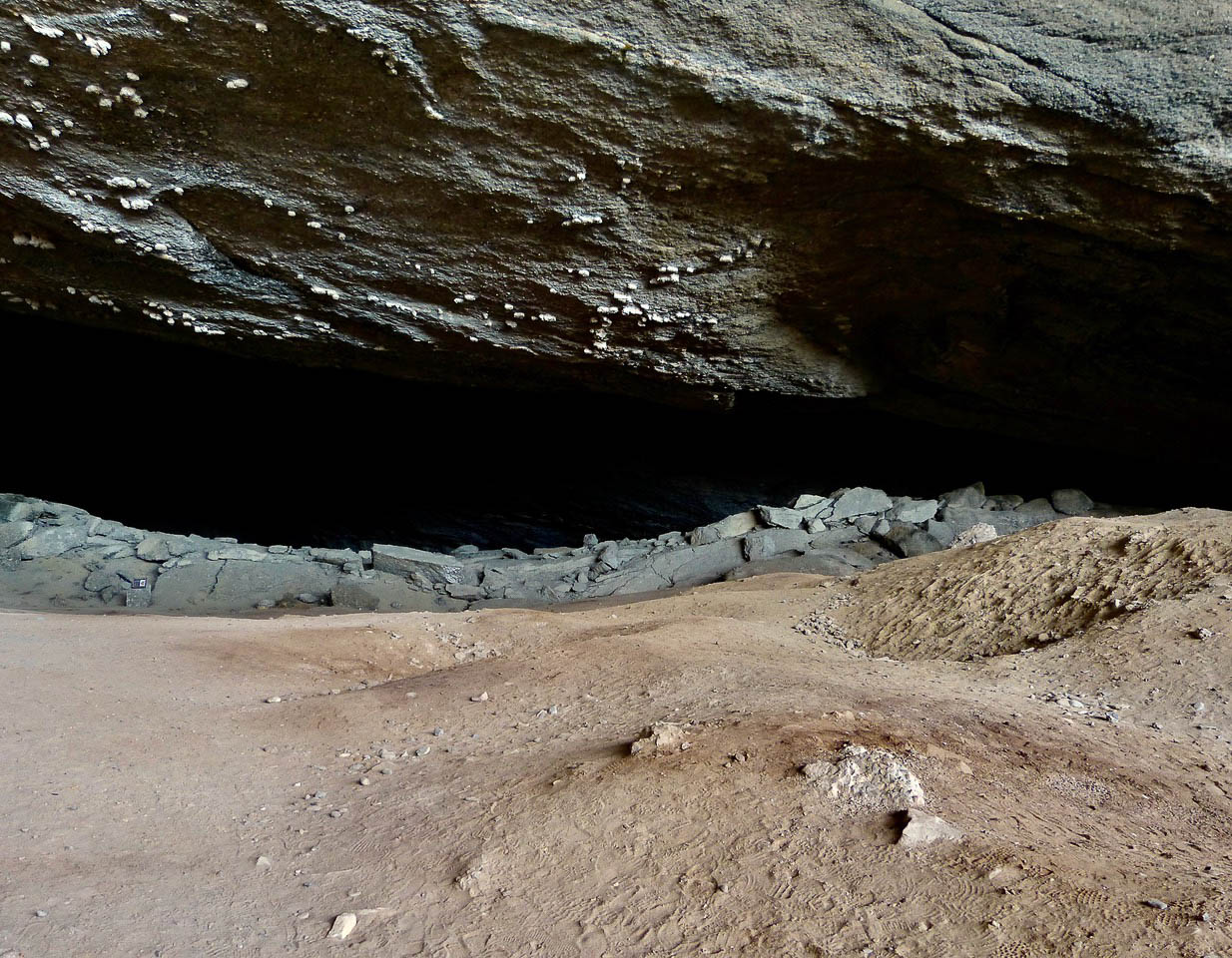 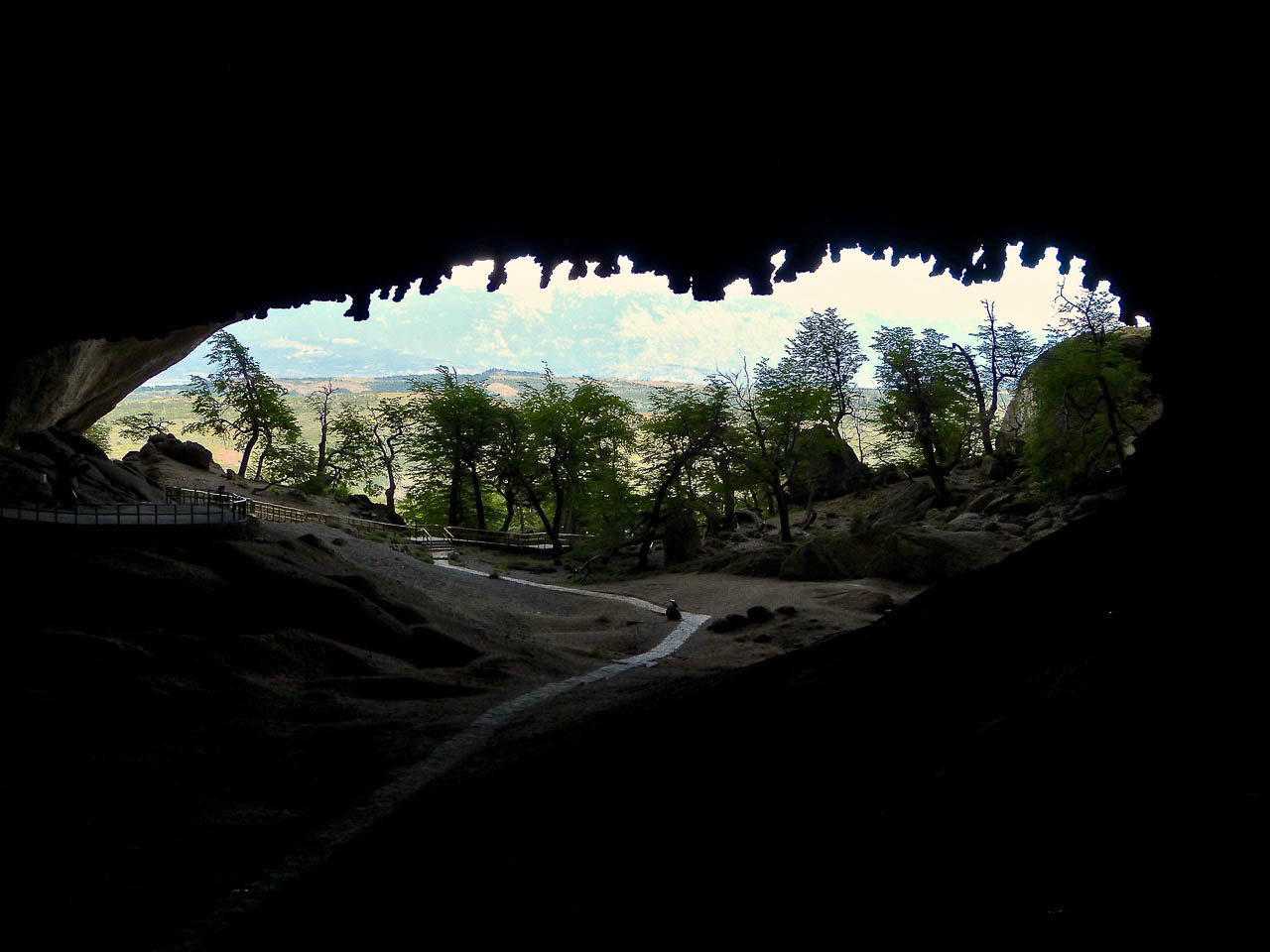 ePostcard Dedication: I dedicate many of the ePostcards in Cloud Ridge’s “In Darwin’s Footsteps” series to my dear friend and mentor, Dr. Yan Linhart, Professor Emeritus of Biology and Genetics at the University of Colorado. Yan’s patience with me as I stumbled my way from geology into his genetics and evolutionary biology classes as a complete neophyte inspired my life-long interest in evolutionary biology and ecology. His exceptional teaching conveyed the magic of evolutionary biology in ways I continue to aspire to in my own writing. I think he’ll remember this moment of discovery at Cueva del Milodón, with Don Van Wie and Sarah Drummond, as fondly as I do! 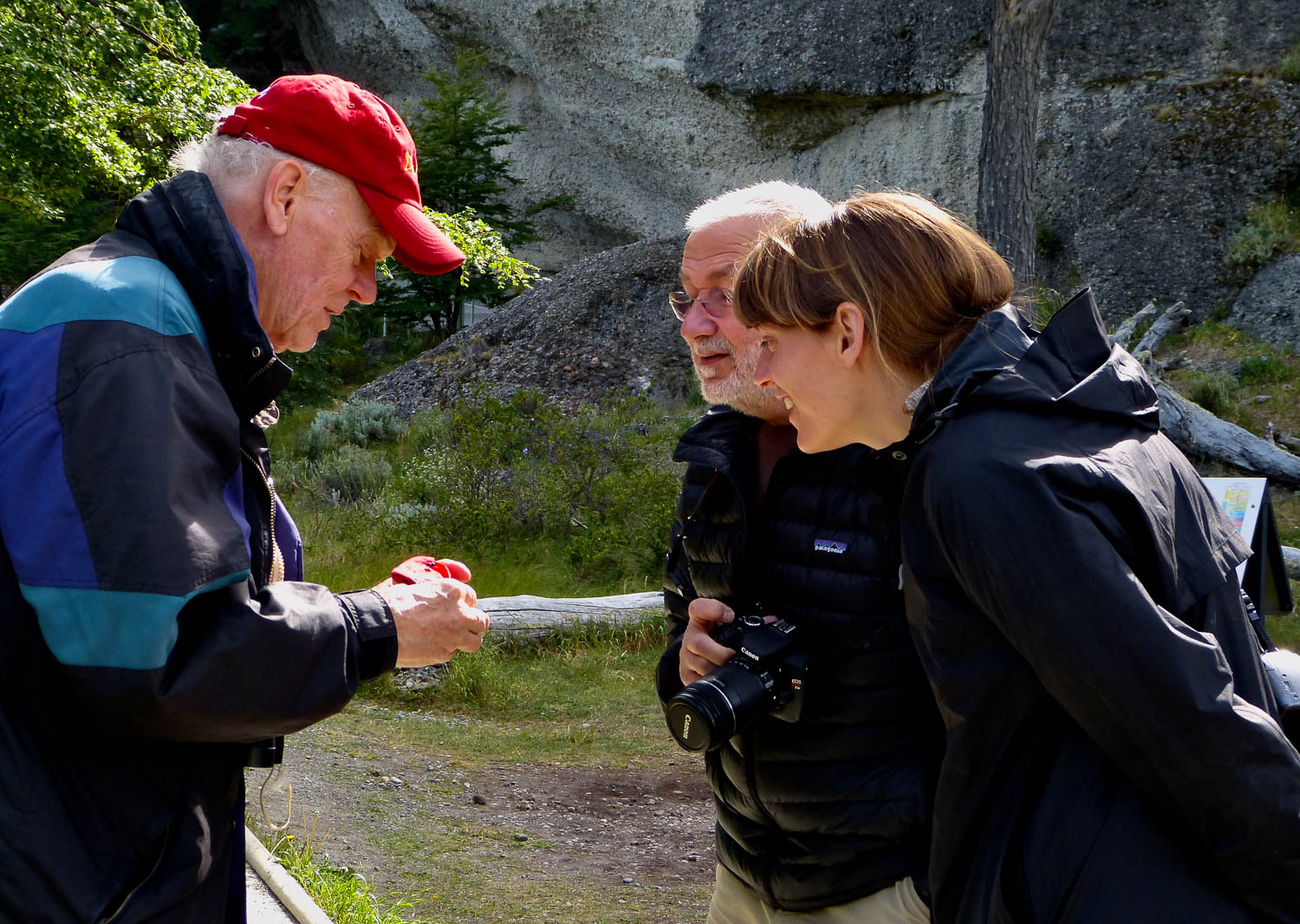 This handsome beetle (with an orange mite hitching a ride) is a member of the Snout and Bark Beetle Superfamily Curculionoidea. The snout beetles are one of the largest and most highly evolved groups of coleopterans, with a head prolonged into a conspicuous beak or snout. Thanks to a search on iNaturalist of snout beetles common to Patagonia, I’ve identified this one discovered at Cueva del Milodón as Rhyephenes maillei. 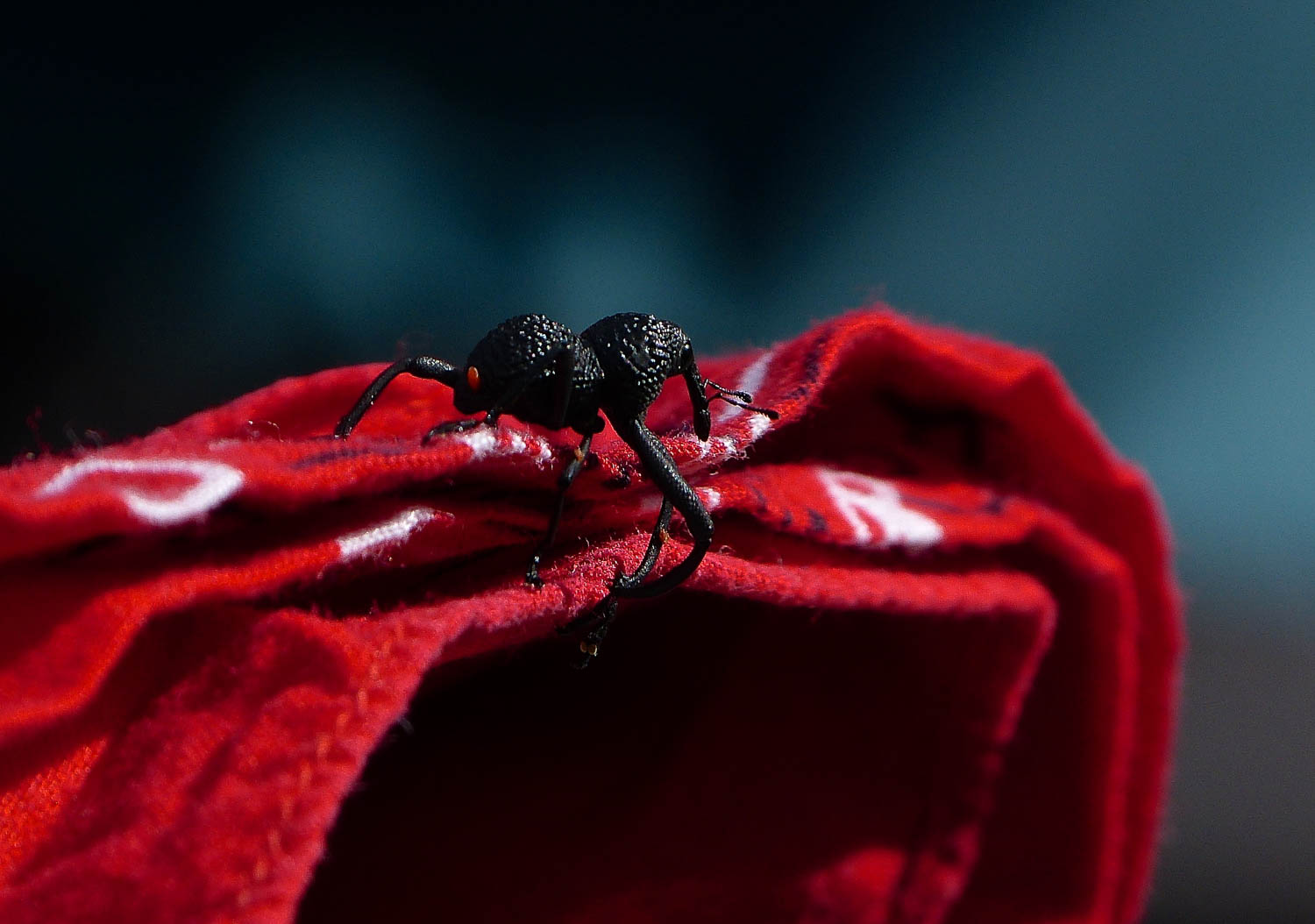