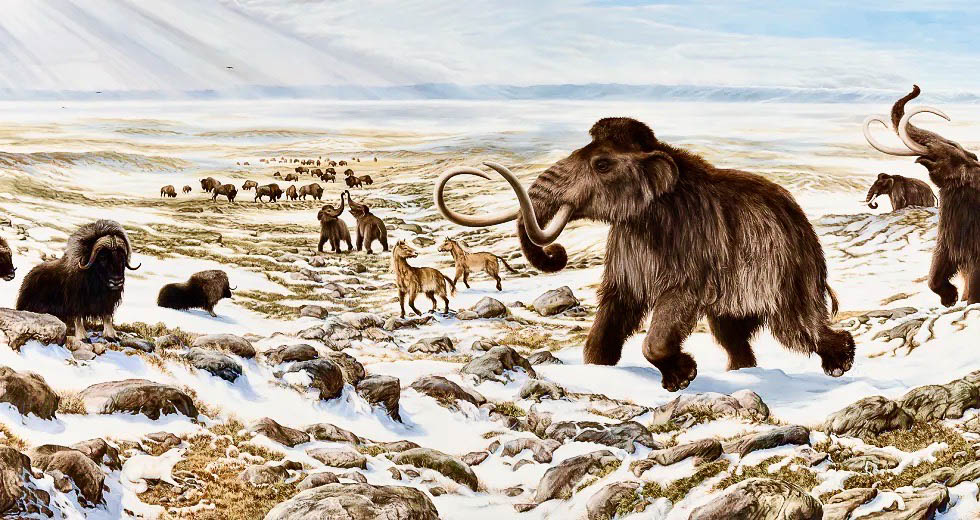 Imagine for a magical Ice Age moment that you are traveling across the vast expanse of Beringia. You have reached the eastern edge of the known world. You are watching woolly mammoths taking advantage of their size and formidable tusks to rout a pride of lions gathered around their kill in the mammoth’s territory. As the mammoths move on across the tundra you see them use their tusks to clear the wind-packed snow from the ground so they can browse. They won’t linger for long because the Arctic winds are howling. You watch as the lions return to their kill after the mammoth herd moves on to a more sheltered valley.

During glacial times, the cold tundra grasslands you see in these paintings provided prime habitat for large herds of Pleistocene grazers, including woolly mammoths, steppe bison, muskox, caribou, and Yukon horses. During warmer periods (interglacials), the tundra was also home to other browsers and grazers, such as Yukon camels, flat-headed peccaries, saiga antelope, elk and arctic ground squirrels. A remarkable bestiary of predators, including Beringian cave lions, scimitar cats, giant short-faced bears, and gray wolves also prowled the steppes and tundra valleys, hunting for prey. Bands of hunter-gatherers, the first wave of modern humans (Homo sapiens) to arrive in the New World, would eventually explore this landscape too, searching for food and skirting the white Arctic barrens.

What do scientists tell us about Beringia? As you know, Earth’s climate was not always cold. Over the last 2.5 million years, evidence derived from paleoclimate research has shown repeated cycles of cold “glacial” and much warmer “interglacial” periods. In the warmer interglacial periods, temperatures were similar to what we see in today’s Arctic regions. Keep in mind that the impacts of global warming in the Arctic during the human-driven Anthropocene are changing our definition of “normal” on an almost daily basis.

During the last Ice Age, the oceans were about 300 feet lower than today. The floor of the Bering Sea (Bering Strait) emerged to become the continent-sized land mass we know as Beringia, the vast land “bridge” connecting Russian Siberia with Alaska and the Yukon. The climate of Beringia was extremely dry and windy. Snow did not accumulate to the depths needed to form large ice sheets, and geologists believe that Beringia was mostly ice free during the last Ice Age. Beringia would have been a natural travel corridor for a great diversity of life, including humans, and an Arctic ecosystem unlike anything we know today. 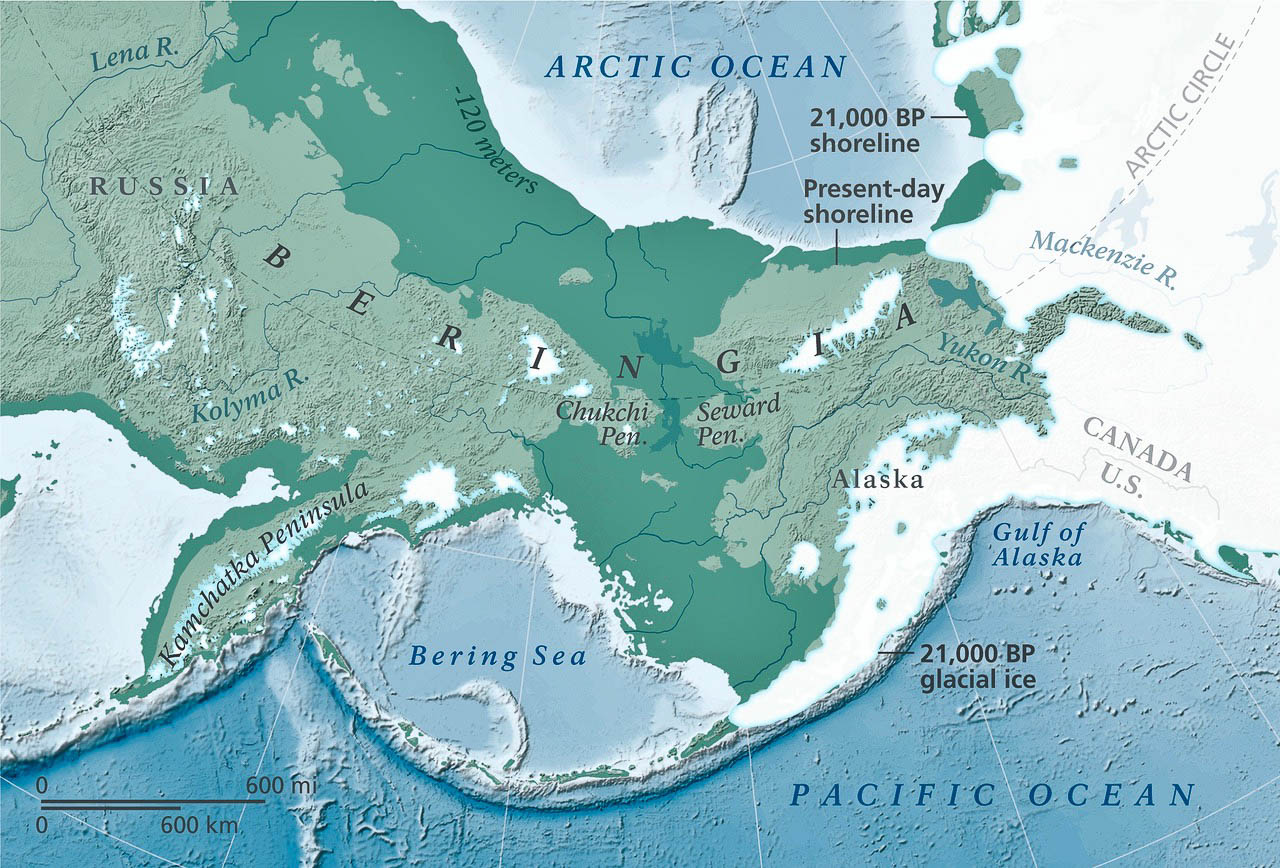 Map Credit: This map is courtesy of the National Park Service’s Shared Beringian Heritage Program, which recognizes and celebrates the unique natural resources and rich cultural heritage shared by Russia and the United States across the landscapes and seascapes known as Beringia. The program resulted from a commitment by Presidents George H.W. Bush and Mikhail Gorbachev in 1991 to expand cooperation in the field of environmental protection and the study of global change. (Maps and other resources are available at NPS.gov)

New multidisciplinary research efforts and technological advances are providing extraordinary insights into ice age landscapes as scientists continue to examine the well-preserved remnants of animal and plant life archived in the ultimate cold storage freezer—northern permafrost. As the accelerating rate of melting permafrost becomes more widespread, recovering these vulnerable remains becomes a critical race to save them before they decay and are lost forever.

Artists who specialize in depicting the extinct species and landscapes of the ancient world—paleoartists—often often work closely with paleontologists and biologists to study the skeletal and mummified remains of an animal. They compare these remains with similar species, and are then able make an informed depiction of the animal’s appearance and habits. The practice can be difficult, since there are large gaps in our knowledge of certain extinct species. Despite these unknowns, artists are able to create scientifically viable and compelling models, dioramas for display, illustrations and mural-sized paintings of the ice age world and the animals that populated it. Think about the museums and many books enriched by paleoart in all its forms. The legacy of generations of artists, scientists and educators is a gift to future generations the world over.

Mural Credit: This massive digital painting of ice age megafauna, which was the Winner of the Society for Vertebrate Paleontology’s Lanzendorf Award, 2020(2D), was created by Beth Zaiken and the Blue Rhino Studio for the Royal Alberta Museum (Edmonton, Alberta). 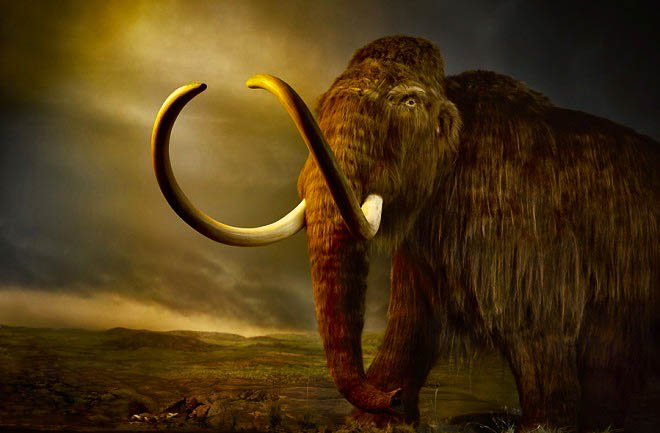 Artist Credit: Stephen Wilkes, Courtesy of the Royal BC Museum and Archives, Victoria, BC, Canada. Here you see an iconic example —a woolly mammoth—of the Ice Age megafauna of North America. Except for small isolated populations on Russia’s Wrangel Island and St Paul Island in the Alaskan Pribilof Islands, woolly mammoths went extinct soon after humans arrived on the continent.

Few adults or children would dispute my assertion that woolly mammoths, which were about the size of today’s African elephant, were the most charismatic of the extinct Pleistocene megafauna and emblematic of the last ice age. Unlike the extant elephantids, which live in warm tropical and subtropical habitats, woolly mammoths lived in the extreme cold of the dry steppe-tundra where average winter temperatures ranged from −30° to −50°C.

Both woolly mammoths and mastodons overlapped in Beringia during the early to mid-Pleistocene, with mammoths favoring the colder glacial epochs and mastodons thriving in the warmer interglacial periods. Scientists are using extremely well-preserved mammoth remains found frozen in permafrost from sites in the Russian and North American Arctic to gain insights into the lives of these prehistoric megafauna, including their genetic makeup, appearance, and the diet of these animals. We now know the complete sequence of mammoth DNA, including hair color and blood proteins. 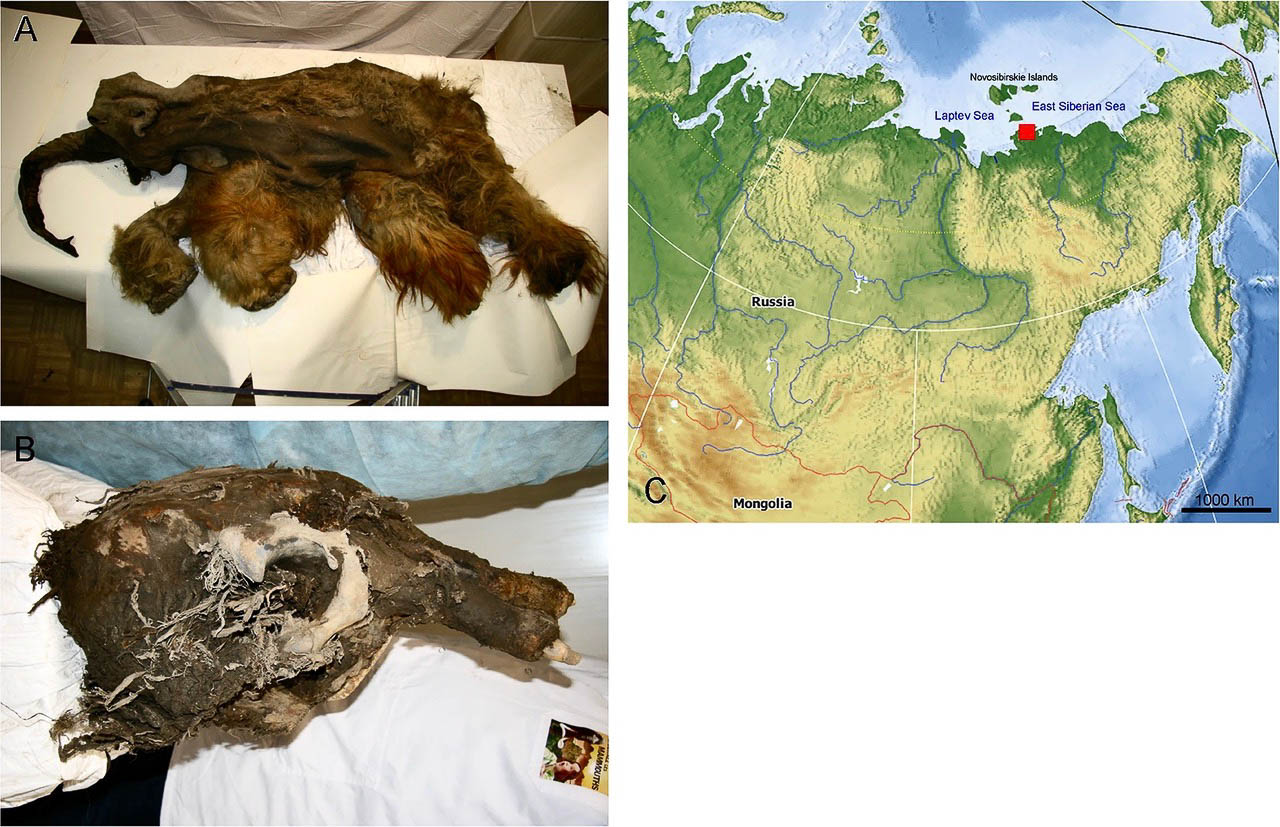 Photo Credit: These photos and locational map show the mummified Woolly Mammoth that was recovered in August 2010 when the carcass was exposed on a ledge of melting permafrost high on a north-facing bank of the Kondratievo River (Oyogos Yar locality, Laptev Sea region, Sakha Republic, Russia). The juvenile female mammoth (6–9 years old) was nicknamed ‘Mammoth Yuka’ after the village of Yukagir, whose inhabitants discovered it. The first photo (A) shows a general view of the mammoth carcass, (B) shows the skull, and (C) shows where it was found in Eastern Eurasia. These photos and the documentation history of this unique specimen are provided here from open source articles by Kharlamova et al. and Neretina et al in Sci Rep 10, 859 (2020). (https://doi.org/10.1038/s41598-020-57604-8).

Woolly mammoths evolved a suite of morphological adaptations to life in the extreme cold, including small ears and tails, a long thick coat, and, unlike other elephants, numerous large sebaceous glands, which are thought to have helped repel water and improve insulation. To identify the genetic changes that underlie the suite of woolly mammoth adaptations to extreme cold, geneticists sequenced the nuclear genome from three Asian elephants and two woolly mammoths, and identified and functionally annotated the genetic changes unique to woolly mammoths. The researchers found that genes with mammoth-specific amino acid changes are enriched in functions related to the circadian rhythm (the recurring processes that occur naturally on a twenty-four-hour cycle, even in the absence of light fluctuations), skin and hair development and physiology, lipid metabolism, adipose development and physiology, and temperature sensation. Their distinctively curved tusks may have been used for display, defense, or to sweep away snow cover to access vegetation. Mammoth tusks contain growth rings, like those of a tree, which can tell researchers a great deal about a mammoth’s health and environment throughout its entire life.

Researchers estimate that woolly mammoths disappeared from North America’s mainland at the end of the last ice age, between 10,000 to 14,000 years ago. Existing evidence suggests that they disappeared from Alaska and the Yukon around 12,000 years ago, but persisted on Alaska’s St. Paul Island for thousands of years after that. Alaska’s St. Paul Island, like the rest of the Pribilofs, was once part of the North American mainland. It was cut off from the continent beginning about 11,000 years ago as the sea level rose. An isolated mammoth population managed to survive on Wrangel Island (off the northern coast of Siberia) until as recently as 4,000 years ago, which means that the Wrangel mammoths were alive as Egyptians were erecting the pyramids.

Like Wrangel, St. Paul hasn’t always been an island. At the peak of the last ice age, around 21,000 years ago, it was a volcanically active spot on the southern edge of Beringia. Then, around 11,000 years ago, the climate began to warm and sea level rose, isolating the island over the next 2,000 years. The mammoths were trapped, but their island isolation may have protected them from predators. The final straw for mammoths was habitat loss: With increasing sea levels, the island may have become too small to sustain its dwindling mammoth population. St. Paul’s tundra landscape has changed very little since the end of the last ice age. While the distribution of woolly mammoths extended from Europe, across Siberia into North America, the genetic evidence suggests that after colonizing North America, there was minimal gene flow back west across the land bridge (as reported by Chang et al. 2017). 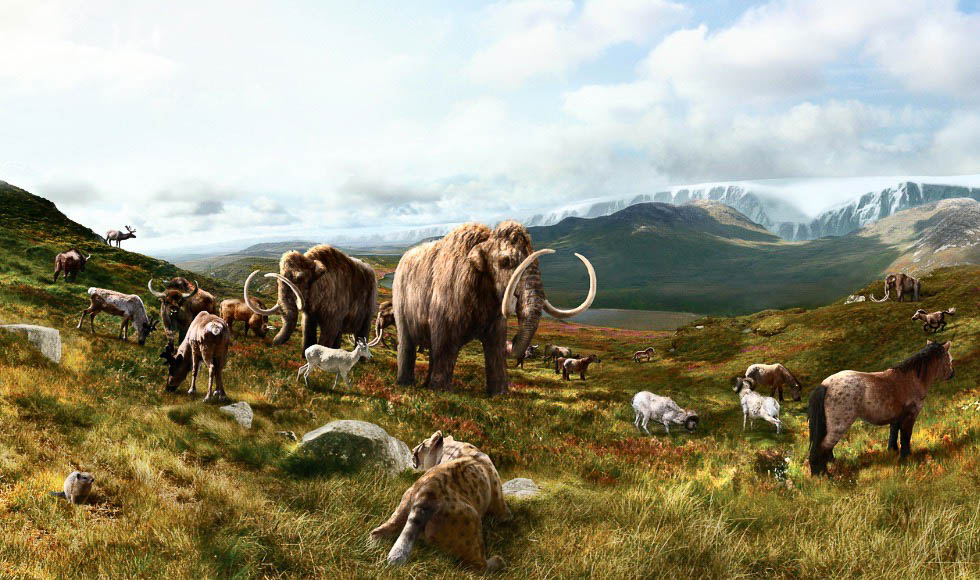 Many people are surprised to learn that horses first appeared in North America. In fact, the earliest known ancestral horse in the world lived in North America 30-50 million years ago. During the Ice Age, horses were among the most abundant large mammals on Beringia. These ancient horses were much smaller than the horses of today, and they had more toes. Since then, horses have evolved, adapted and expanded across much of the world.

In an article published in the journal Nature Communications, researchers from McMaster University, the University of Alberta, the American Museum of Natural History and the Yukon government presented a 30,000-year DNA record of past environments, drawn from cored permafrost sediments extracted from the Klondike region of central Yukon. The researchers used DNA-capture enrichment technology developed at McMaster University to isolate and rebuild, in remarkable detail, the fluctuating animal and plant communities at different time points during the Pleistocene-Holocene transition, an unstable climactic period 11,000-14,000 years ago when a number of large species such as mammoths, mastodons and sabre-toothed cats disappeared.

“Although mammoths are gone forever, horses are not” says Dr. Ross MacPhee of the American Museum of Natural History, one of the coauthors, “The horse that lived in the Yukon 5,000 years ago is directly related to the horse species we have today, Equus caballus. Biologically, this makes the horse a native North American mammal, and it should be treated as such.”

Researchers still debate what caused the mammoths to die out on the North American mainland at the end of the last ice age. Some say it was the changing climate, while others argue that humans were the culprits, hunting mammoths to extinction. Recent research suggests that mammoths and horses were already in steep decline prior to the climatic instability, but they did not immediately disappear due to human overhunting as previously thought. The DNA evidence shows that the woolly mammoth and North American horse persisted until as recently as 4,000 to 5,000 years ago, during the mid-Holocene, the interval beginning roughly 11,000 years ago that we live in today. These remarkable discoveries are the result of advances in dating technologies and enormous strides in genetic research capabilities.

← ePostcard #158: Voices Across the Tundra