ePostcard #158: Voices Across the Tundra 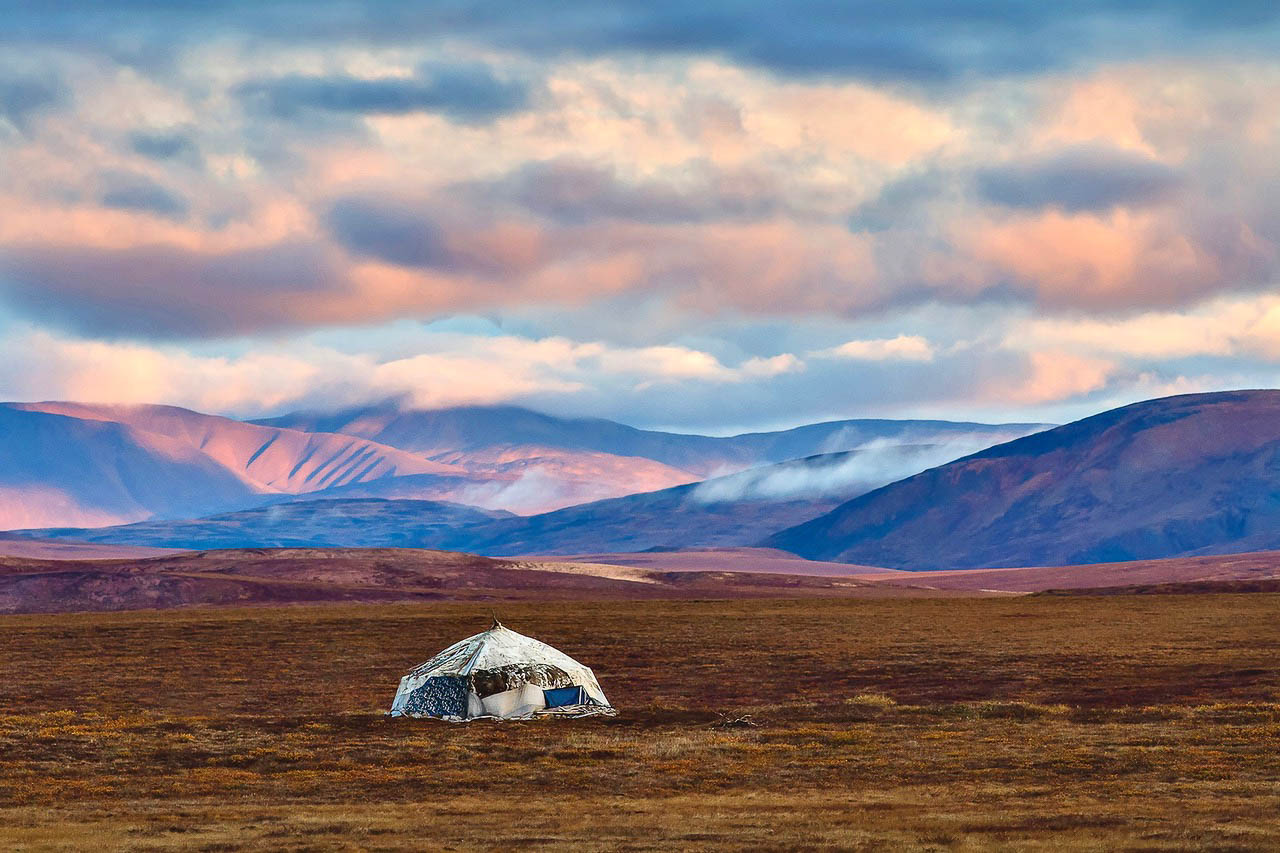 Photo Credits: All color photographs in this ePostcard are by Audrey DeLella Benedict (unless otherwise noted) and are from a 2009 Cloud Ridge Naturalists trip to the Russian Arctic and Wrangel Island with Heritage Expeditions. The archival black and white photographs (dating from the early 1900’s are attributed to Edward S. Curtis (Public Domain, Library of Congress), and all maps and paintings are credited as appropriate.

Voices Across the Tundra


The peopling of the Americas, from the Arctic tundra to the fjords of Tierra del Fuego, remains one of humanity’s greatest achievements, a feat of unparalleled endurance and adaptation to some of the harshest environments on Earth. Braving the unknown, the first Americans and their descendants encountered a diverse array of ecosystems on two continents—the longest geographical expanse ever settled by humans. We know that the first people to make the journey across northeastern Asia to the North Pacific shores of the North American continent were few, their fleeting encampments leaving little evidence of their passage. Given the daunting task of locating the campsites of a tiny population of highly mobile hunters and gatherers in the vast northern wildernesses of Asia and North America, we may never have the definitive answer to exactly when the first people arrived or whether they traveled by land or by sea. What we can be certain of is that their arrival was an exploration every foot of the way. 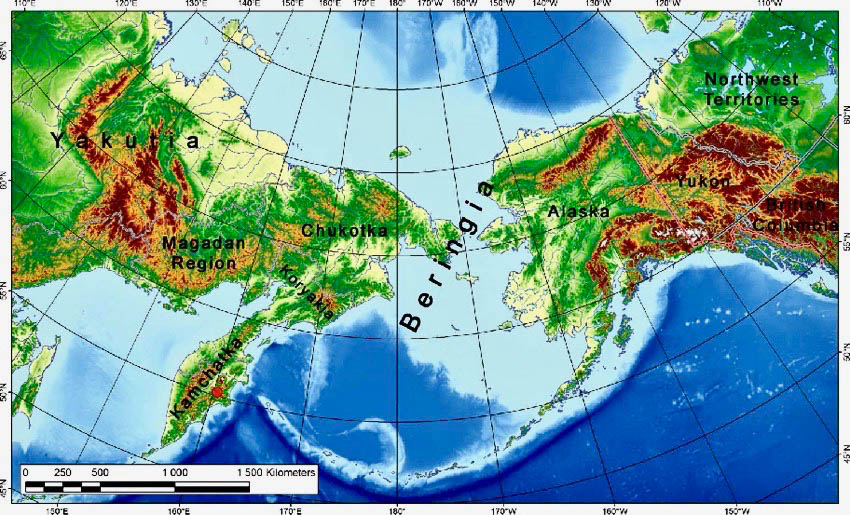 Years go, after I learned that North and South America were the last continents populated by modern humans (Homo sapiens), anatomically just like us), I wanted to follow the research as it progressed and the new tools being used by scientists to identify who the first inhabitants of the Americas were, and how they got there. My fascination with the Indigenous peoples of the circumpolar Arctic regions began in the early 1970’s, with multiple trips to the Canadian and Alaskan Arctic. In the Canadian Arctic, at Bathurst Inlet, I saw Paleo-Inuit game drive systems built of rock that were used for millennia to hunt caribou in the tundra. These drive systems are nearly identical in design to those my geo-archeologist husband studied in the alpine uplands of the Colorado Front Range.

I saw my first “skin” boats—umiaqs, biadarkas and kayaks—in the Aleutian and Pribilof Islands and in the Chukchi and Yup’ik villages along the Russian Arctic coast. Crafted from marine mammal skins (naturally waterproof!), these wonderfully seaworthy boats would certainly have been capable of traveling hundreds of miles across the North Pacific. Being an ardent sea kayaker, my next leap of faith was to envision a scenario in which the first Indigenous explorers to reach the shores of the New World actually traveled across the North Pacific in boats. My most recent book, Pacific Flyway: Waterbird Migration from the Arctic to Tierra del Fuego, opens with just such a scenario. Speculative, yes, but many archeologists are now finding sites with evidence that points to a sea route as a distinct possibility. 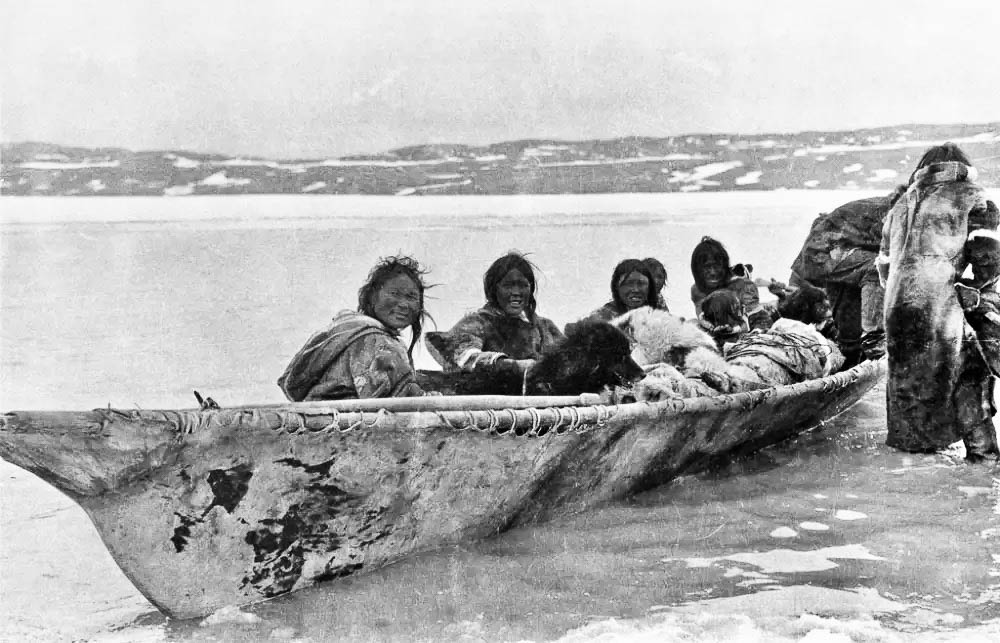 Photo Credit: Unknown, but probably Edward S Curtis, ca 1929. Note the dogs in the boat! More about dogs in a future posting. This umiaq, with a family on the move, is about 17’ long and capable of carrying an entire family, including several sled dogs for pulling a sledge with camping goods. The umaiq is made from the split hide of a female walrus that was lashed with sinew to an alder or willow pole frame. 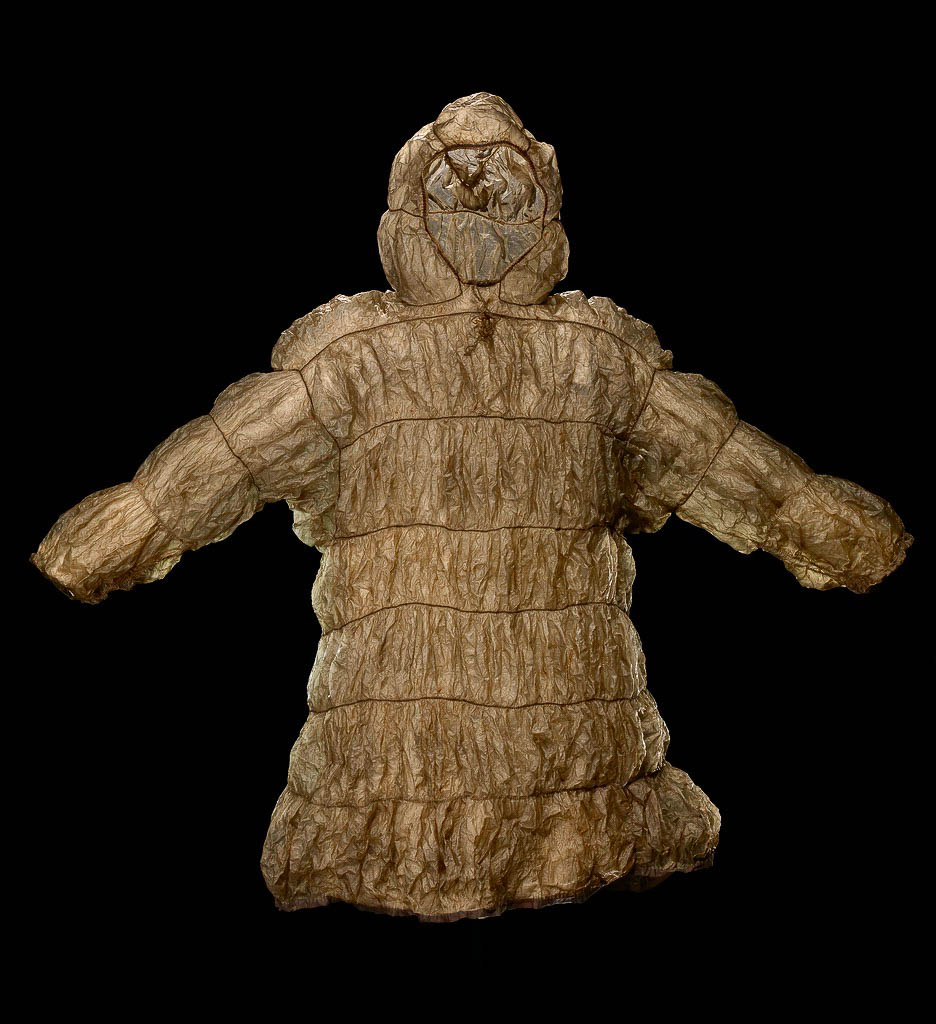 Photo Credit: Courtesy of the National Museum of the American Indian, Smithsonian Institution (photo #22/7435). This extraordinary waterproof parka, made from beluga whale gut, sinew, and grass twine, was part of an exhibition titled Tools: Extending Our Reach. I don’t think even Patagonia can match the quality and utility of this parka. Imagine it being worn with a parka made of seabird skins (murres, etc) underneath it for warmth at sea.

Feather-light and gossamer-thin, the gut parkas created by the Arctic sea hunters of Siberia, Alaska and coastal Canada provided protection from wind, rain, and stormy seas. These wide-skirted parkas could function as sleeping bags and the bottom edge could be tied securely around a kayak cockpit to prevent water penetration. The parkas were constructed from the intestines of sea mammals, including whales, seals, walrus, and sea lions. Nothing was wasted. The guts were removed as part of normal butchering after a hunt, and then cleaned, inflated, dried, and split into long ribbons. The parka in the photo above was made from the gut of a beluga-whale, identifiable by the width of the strips. The intestine, which is composed of many layers of collagen and muscle, allows nutrients to be absorbed by the body of the marine mammal, but it is also impermeable and resistant to decay. Women skillfully sew these parkas with sinew (animal tendon) using watertight seams secured in place with a running stitch. Such parkas also served spiritual purposes, with native doctors wearing one when performing curing or purification ceremonies. 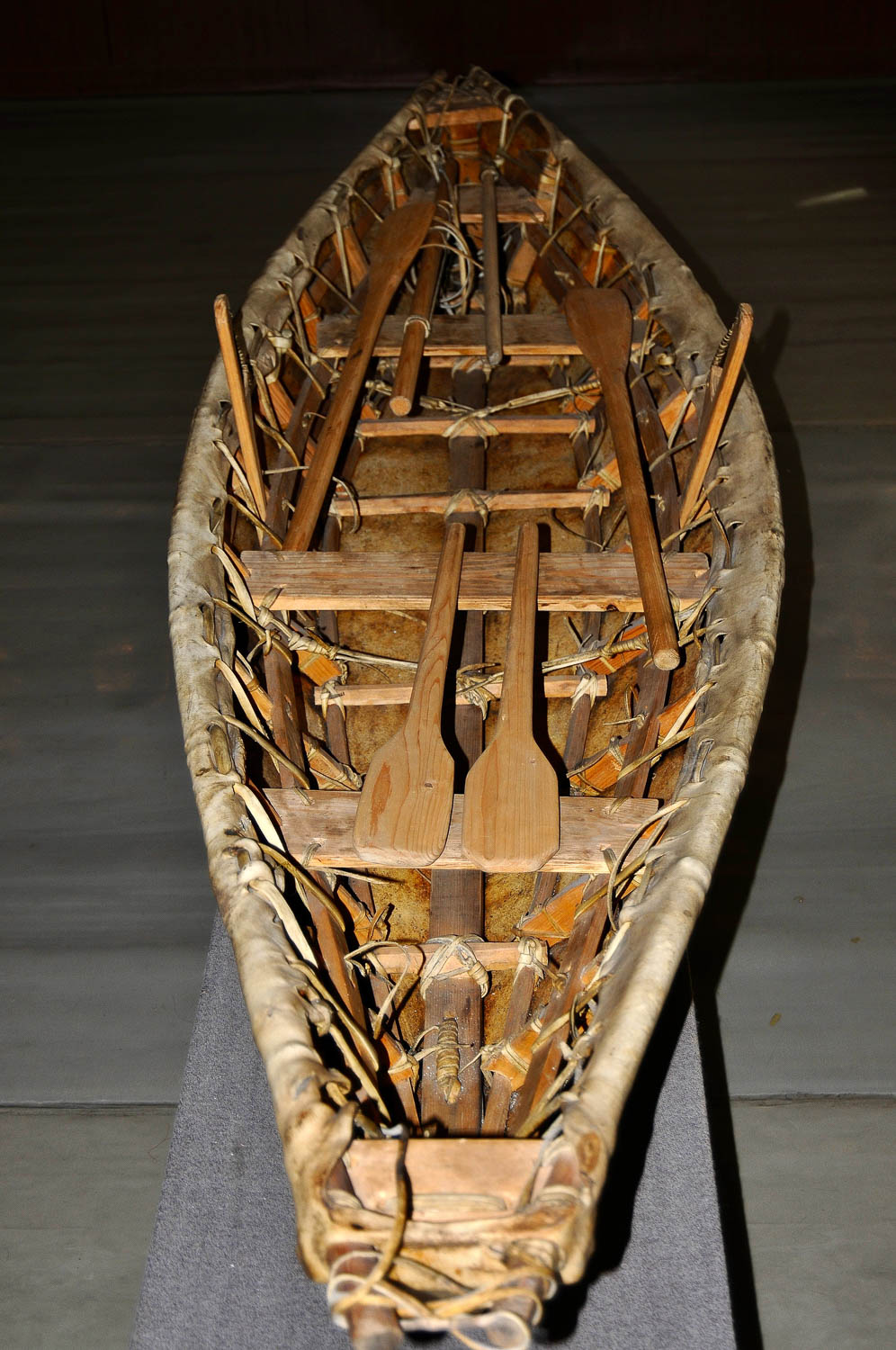 Photo Credits: Umiaq is the name given to a type of skin boat used by the Chukchi, Yup’ik and Inuit peoples. This classic style of umiaq is held together with thongs made of mammal sinew and the hull is constructed of wood, bone (whale), and split walrus hide.The umiaq is an open-faced boat propelled by oar, paddles, and sometimes with a sail in modern times. Smaller umiaqs are around 15 feet, while the larger ones can be as long as 60 feet. They are primarily used for group travel and transporting cargo, though they have been known to be used in whale or walrus hunting.

A CLOUD RIDGE VISIT TO THE RUSSIAN ARCTIC (2009)


For many people, the Arctic is a world apart, where past and present merge in a compelling landscape bathed in the luminous glow of the midnight sun. Others may find it daunting in its vastness and appallingly barren, but it is exactly the opposite of that perception. My intent with Voices Across the Tundra is to take you on a voyage through deep time and to ask you to imagine the Ice Age environment that our early human ancestors experienced—the exhilaration of uncluttered horizons, the summer-long freedom of endless light, the sense of a beloved homeland, and the undeniable connection to the Earth. At some unfathomable level of cultural memory, we all need to acknowledge how far afield our modern lives have taken us from that level of sustainability and connection. The photographs of mine (landscapes, flora and fauna) that I’ve chosen from our 2009 trip, as well as the remarkable portraits by Edward Curtis, are meant to convey a sense of place and the spirit of an Arctic people’s welcome that I wish you all could have experienced firsthand. 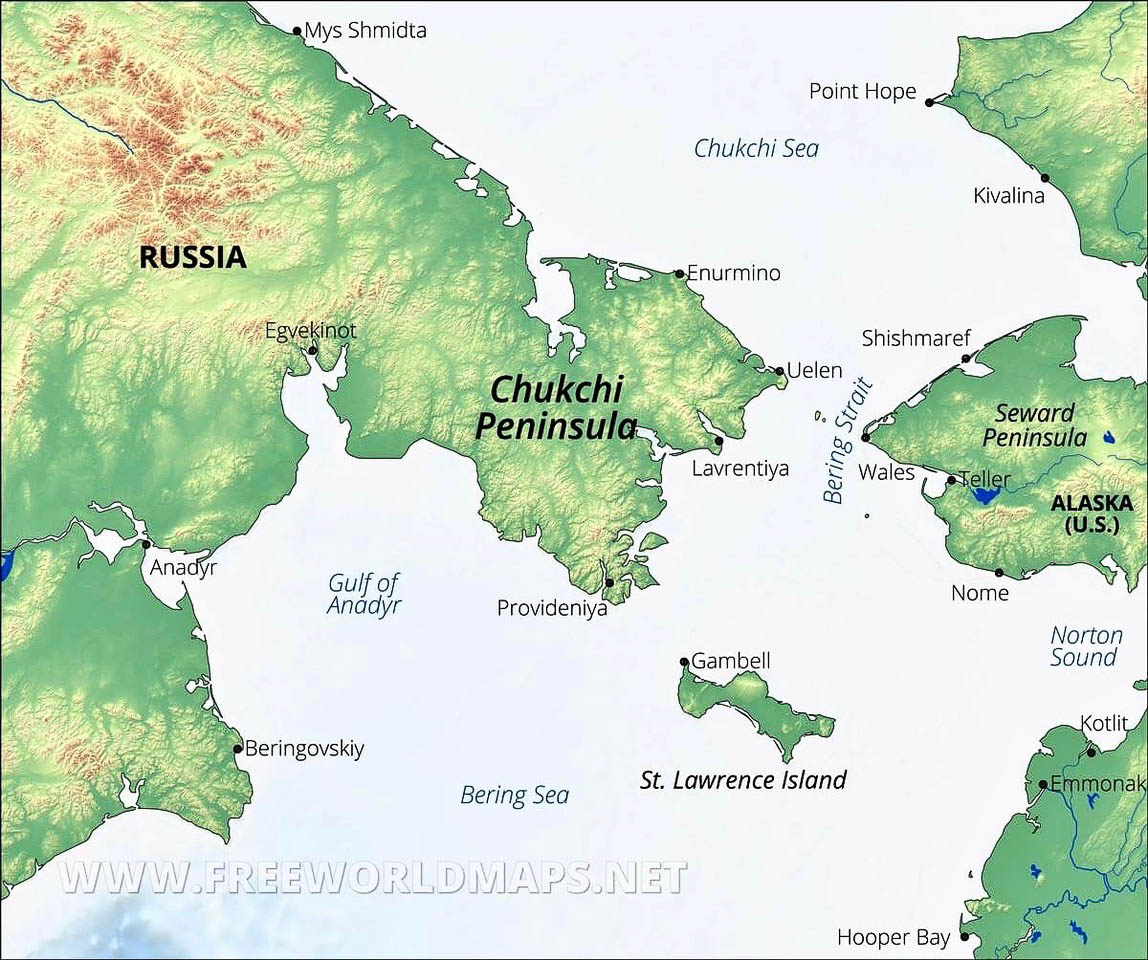 Map Credit: This map focuses on the region of Chukotka and the Chukchi Peninsula and is included here courtesy of Free World Maps. The Chukchi Peninsula, in the extreme east of Siberia—is so far east it’s west; it protrudes east of 180º longitude, forcing the International Date Line to make a bend around it so that it can pass cleanly through the Bering Strait between Russia and Alaska. 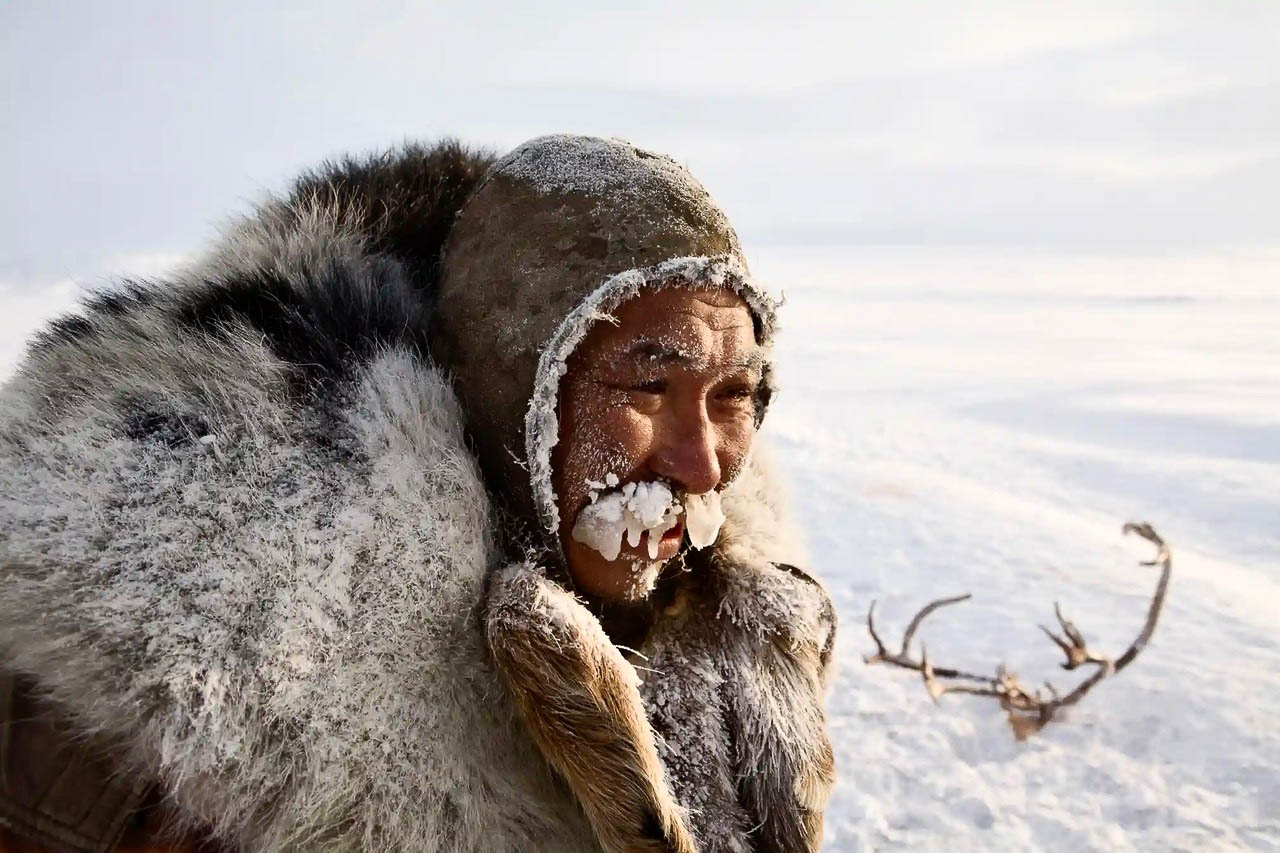 Photo Credit: Courtesy of Bryan Alexander/Arcticphoto and The Guardian.

This modern Yup’ik hunter is wearing the traditional fur clothing that has been used by Arctic peoples for many thousands of years. The same is true for the Chukchi people photographed by Edward Curtis in 1929.

Photo Credits (all b&w’s above): Edward S. Curtis, circa 1929, and courtesy of the Library of Congress’s Prints and Photographs division. (click to enlarge)

2.This Nunivak Cup’ig mother is wearing a traditional hooded parka made of feathered duck skins and her child is wearing a caribou and wolf fur parka.

3. This Nunivak boy is wearing a parka made of common murre skins (a white and black seabird) and a hat of bear fur decorated with bone disk beads. 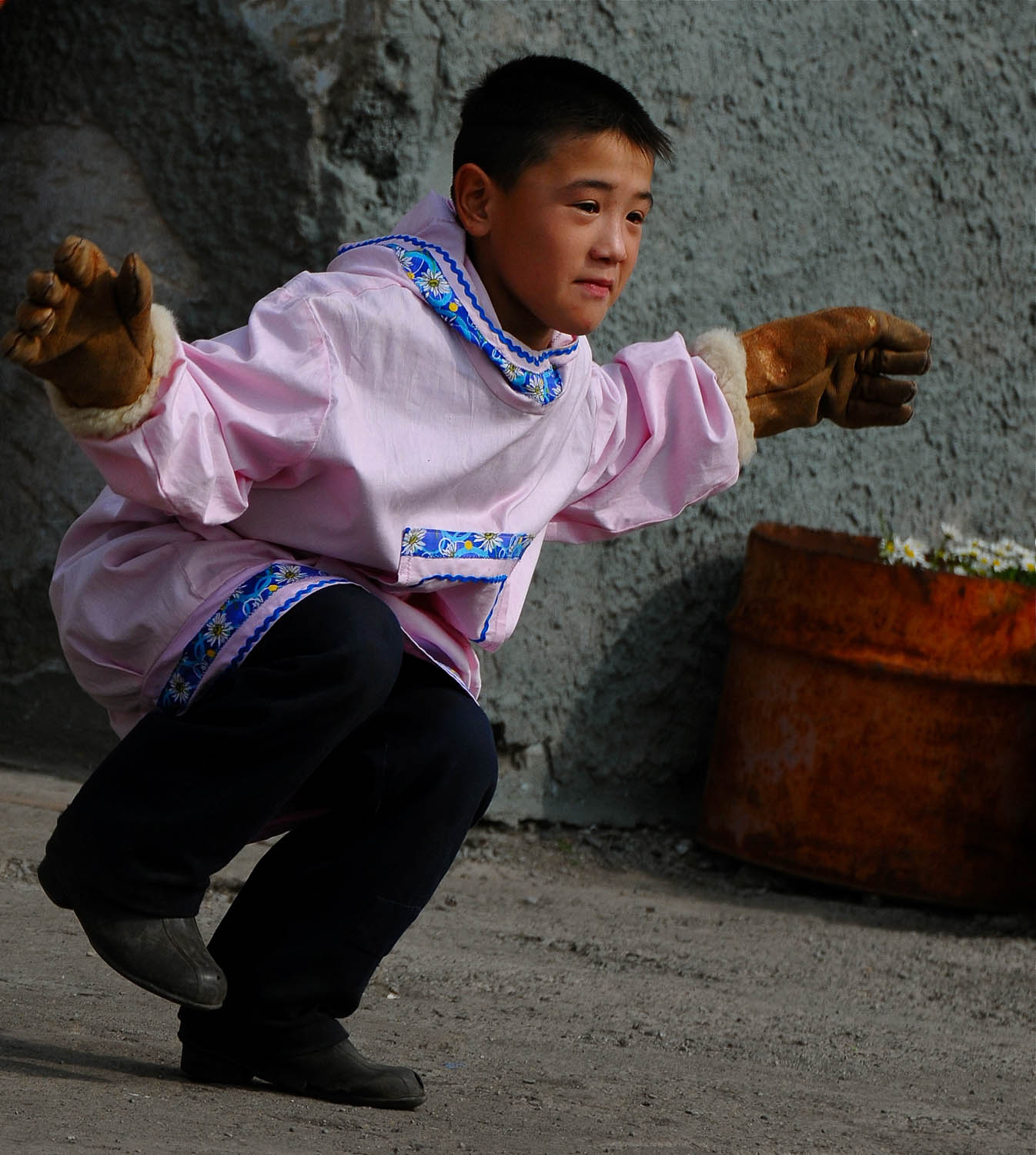 For this young Chukchi boy, in the village of Uelen, the honor of performing a traditional raven dance for us filled him with a pride in his culture that you could feel across time. 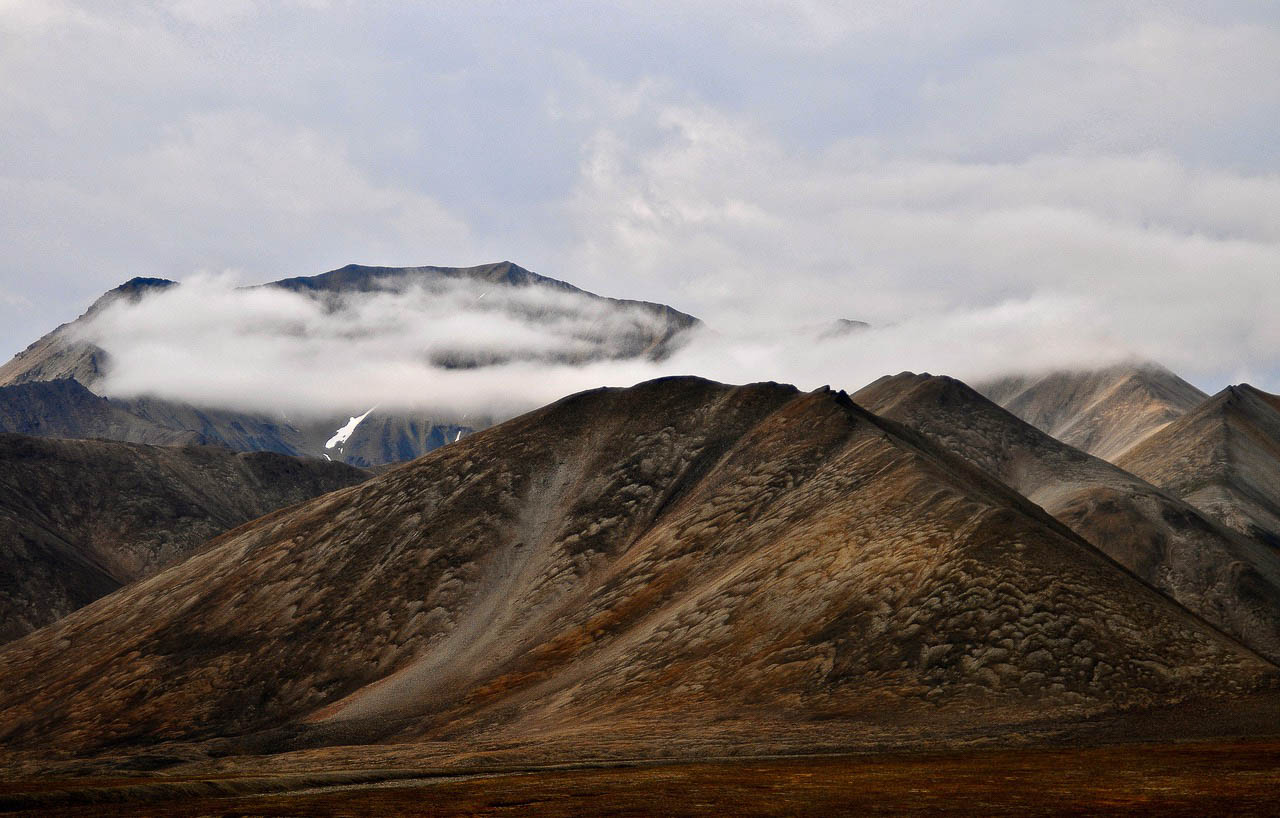 The mountains west of Egvekinot (Chukotka) are patterned by permafrost and frost-action landscape features. 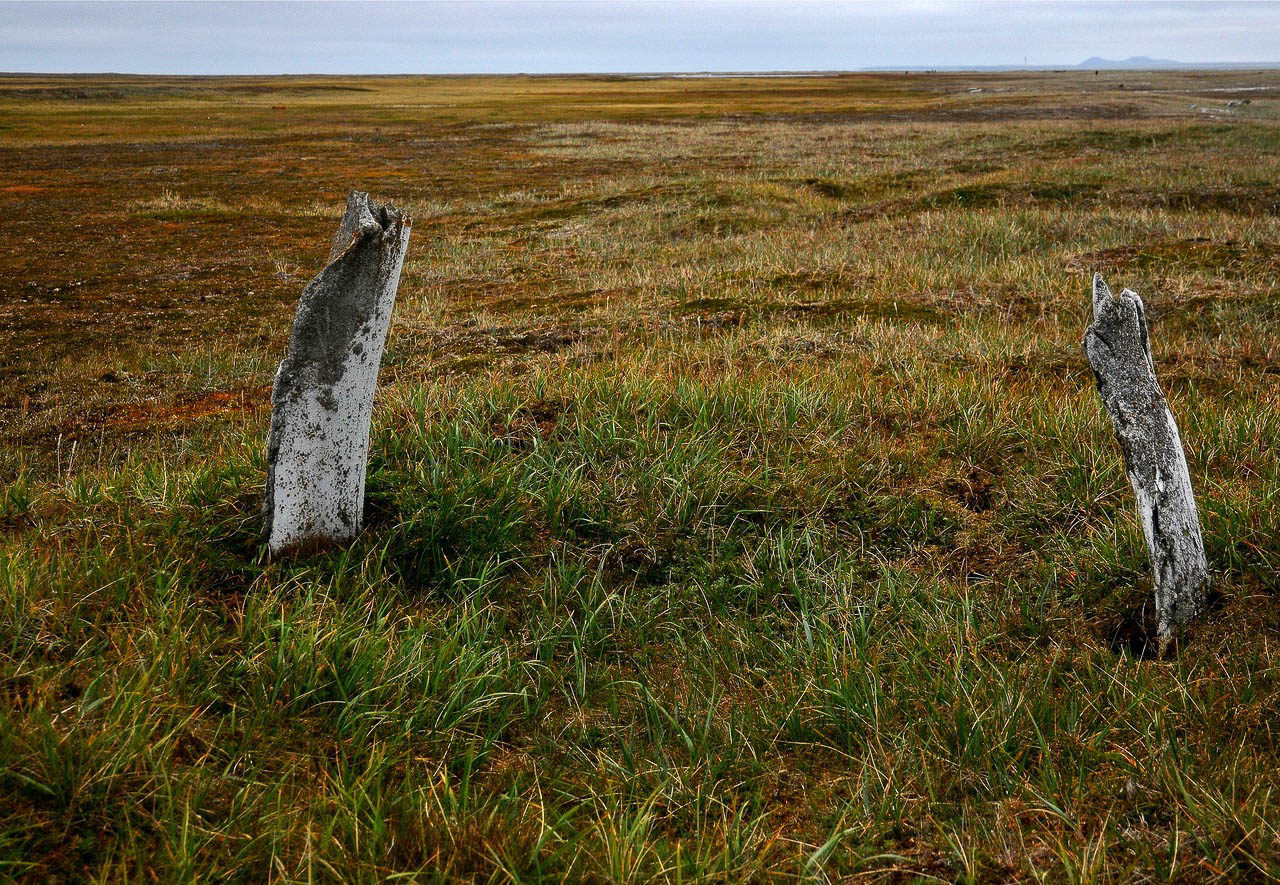 Here you see the remains of an ancient campsite, with a central circular depression and the whale bone frame for a tent made of animal skins . 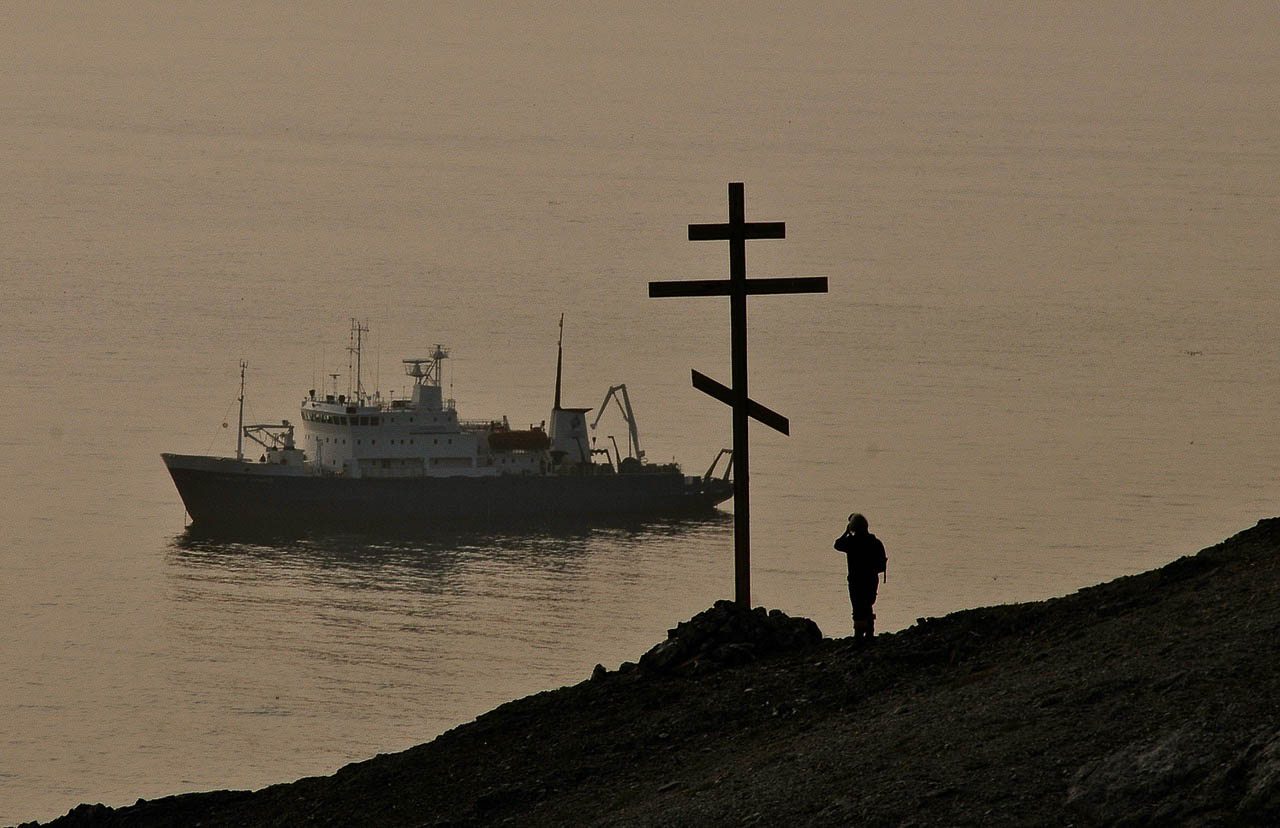 Heritage Expedition’s “Spirit of Enderby,” our Russian expedition ship, at anchor at Cape Dezhnev at dawn. Common murres are curious as we launch the Zodiacs. These are the seabirds that were hunted and, without wasting anything that might be useful, their feathered breasts were sewn together create the warm parka you saw in Curtis’ photos above. 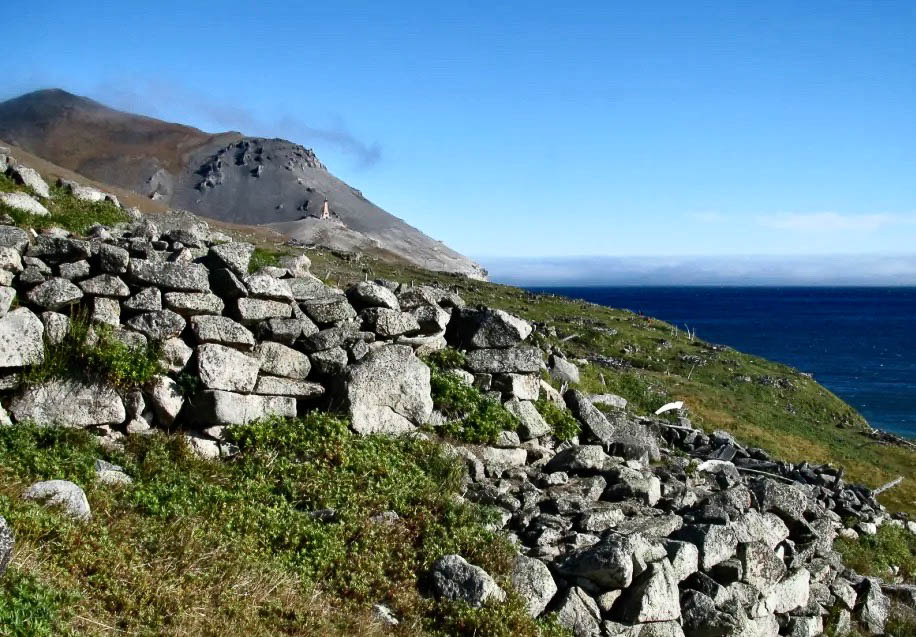 The ruins of Naukan, with the Cape Dezhnev Lighthouse in the distance.

The top photo shows the Spirit of Enderby, resting at anchor at Cape Dezhnev, while we hike the trail through the eerie ruins of Naukan, an abandoned Yup’ik settlement. The Yup’ik people lived here for centuries, on a plateau looking out on the chilly Bering Sea where they hunted for sea mammals. They were forcibly relocated by the Russians in 1958, who pronounced their village “uninhabitable”—one of countless attempts at cultural annihilation similar to the reservation system imposed on Indigenous people throughout North America by the Canadian and United States governments. At the museum in Lavrentiya, we met a Yupik woman who had lived in Naukan as a small child, and still missed it.


At the legendary site known as Whale Bone Alley, on Russian Siberia’s remote Yttygran Island (Chukotka, Beringia National Park), you step back in time to the Late Pleistocene. Forty years ago, Russian archeologists discovered dozens of bowhead whale bones and skulls carefully arranged in the ground running parallel to the shore. The bones, arranged two by two and sticking straight up from the tundra, form an eerie walkway that stretches more than a quarter of a mile along the shoreline. As we approached the beach in the Zodiac, we could see this row of vertically-fixed whale jawbones jutting skyward along the island’s northern shore. The whale jaw bones are believed to mark the spot where archeologists believe that Indigenous people gathered for ceremonial whale butchering, and the square pits found in the central portion of the alley are thought to have contained tons of whale meat. The local Yup’ik people dismiss the archeologist’s interpretation and say that the site was nothing more than a place where whale hunters gathered and collectively butchered their whales, and then stored the meat in the pits. This simple theory is supported by the fact that the Yup’ik name for Yttygran is Sikliuk, which comes from the word Siklyugak, which means “meat pit” in Yup’ik. Whatever role the site played in the lives of the people who lived along this coast, you can literally feel their presence as you quietly walk through the alley.

Photo Credits: The 5 photos above were all taken at Whale Bone Alley, in Chukotka, and were taken in by Audrey in 2009 on a Cloud Ridge expedition trip along the Russian Arctic coast. The 4th photo shows a probable meat cache or other type of rock storage structure. The 5th photo shows one end of a whale bone rack for an umiaq or kayak. The rack would have kept the boat elevated above the soggy tundra, away from gnawing rodents, and secured between sea voyages. 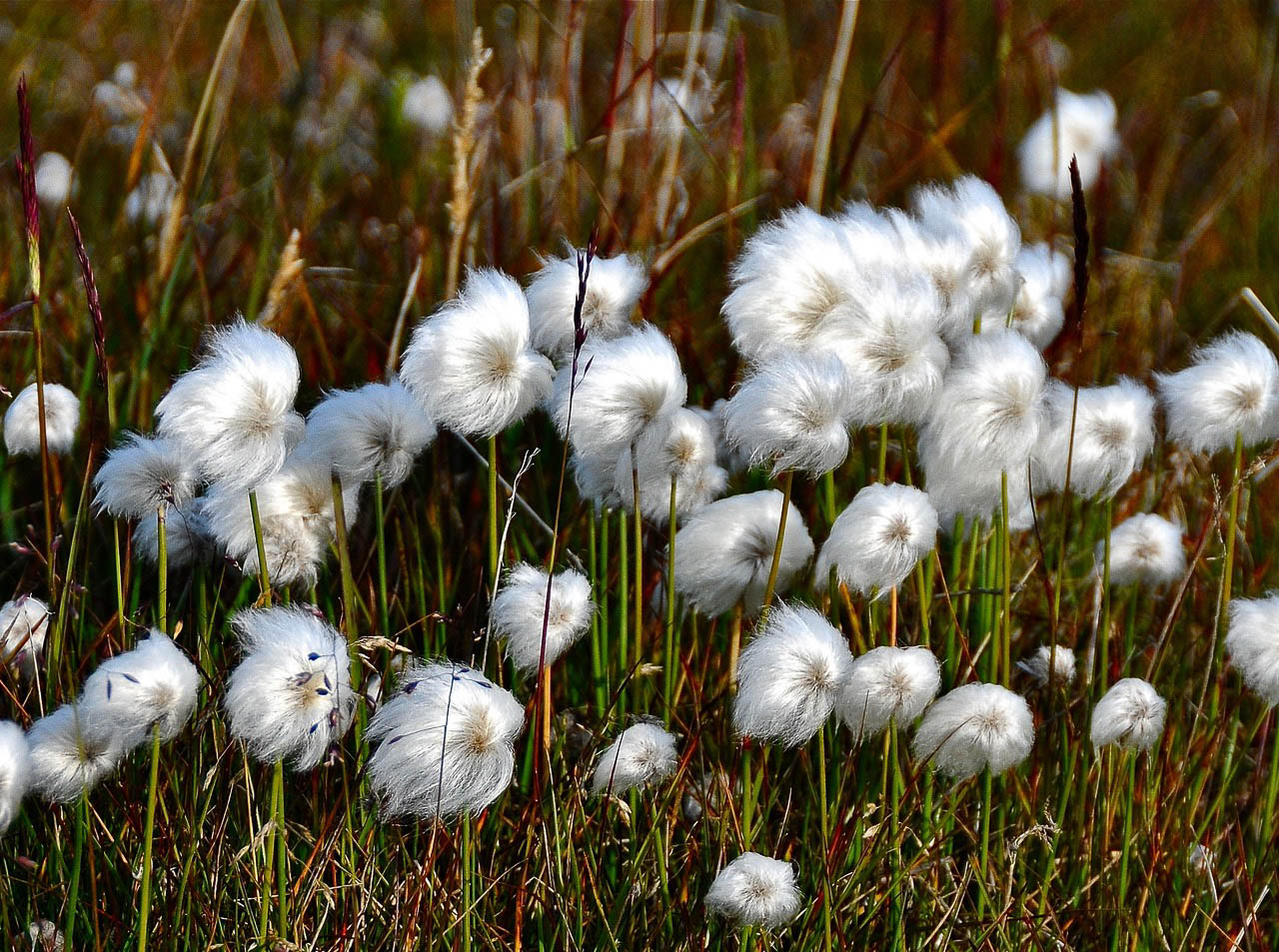 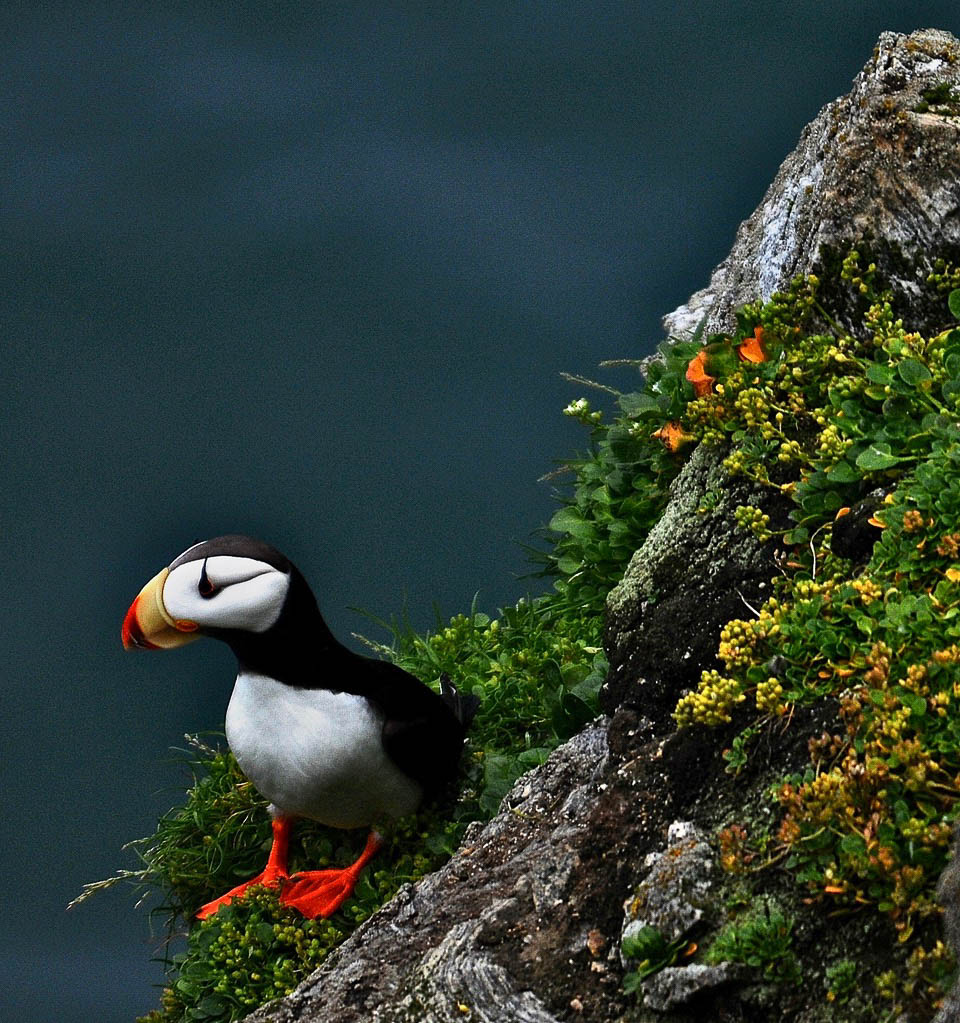 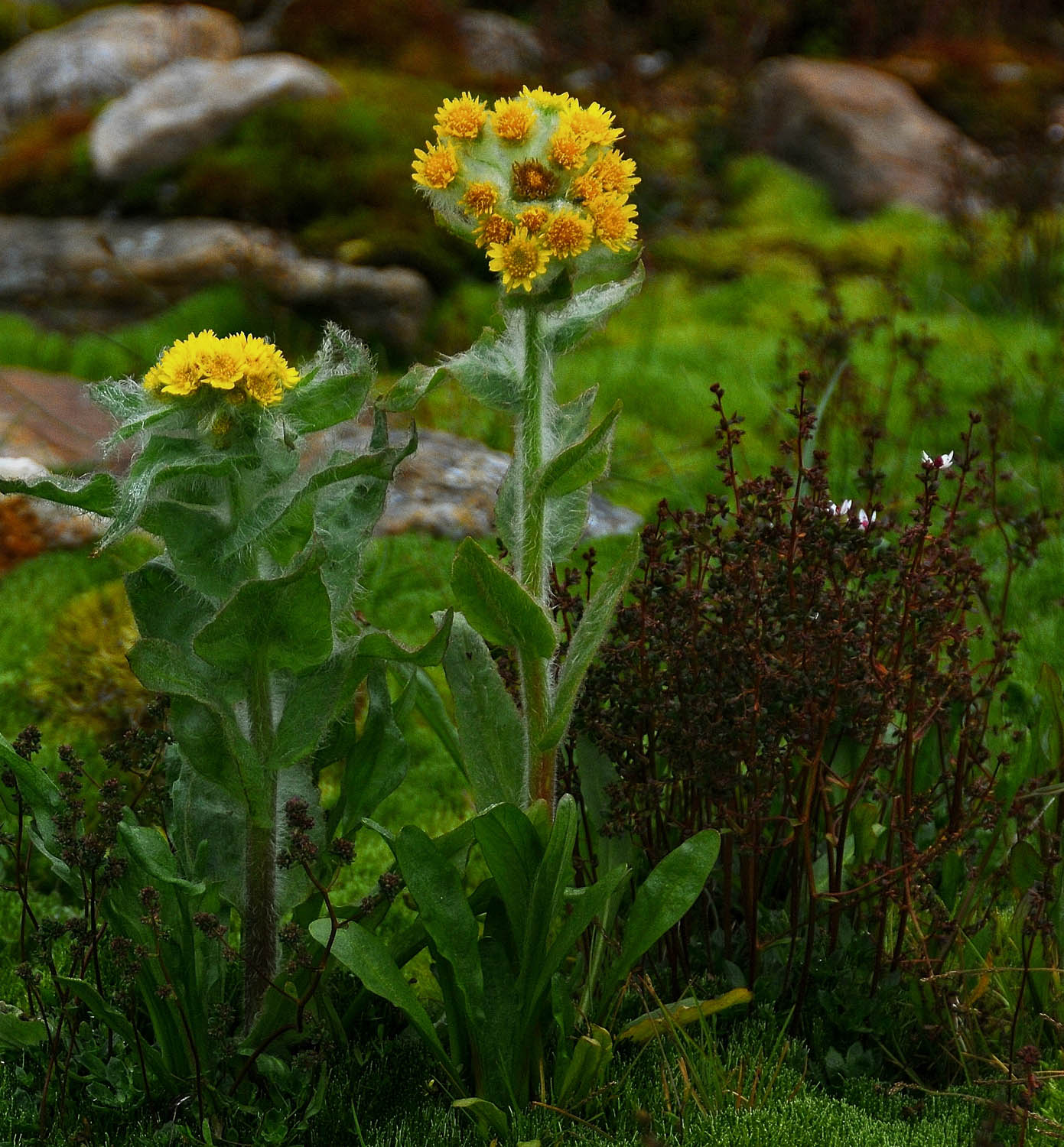 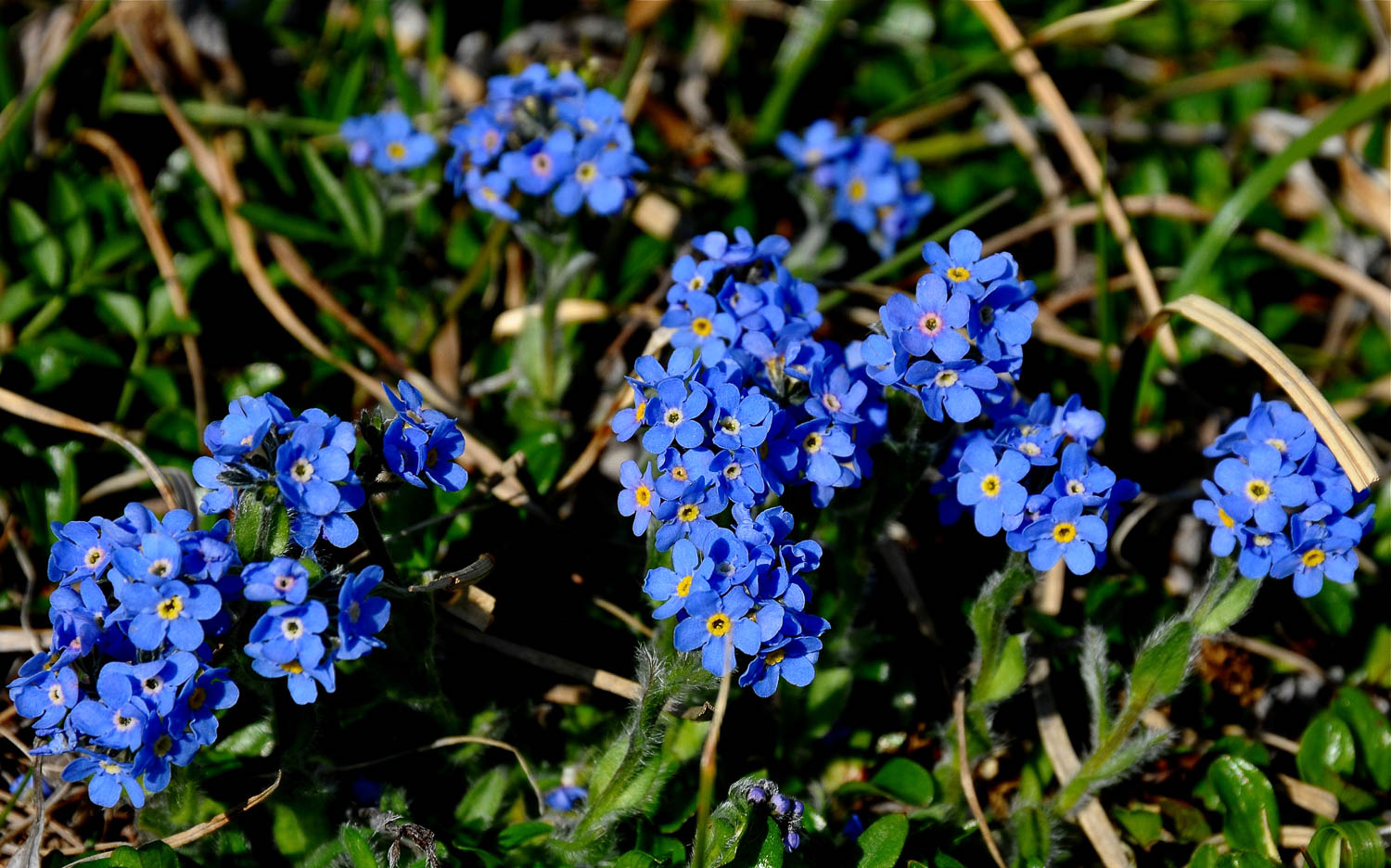 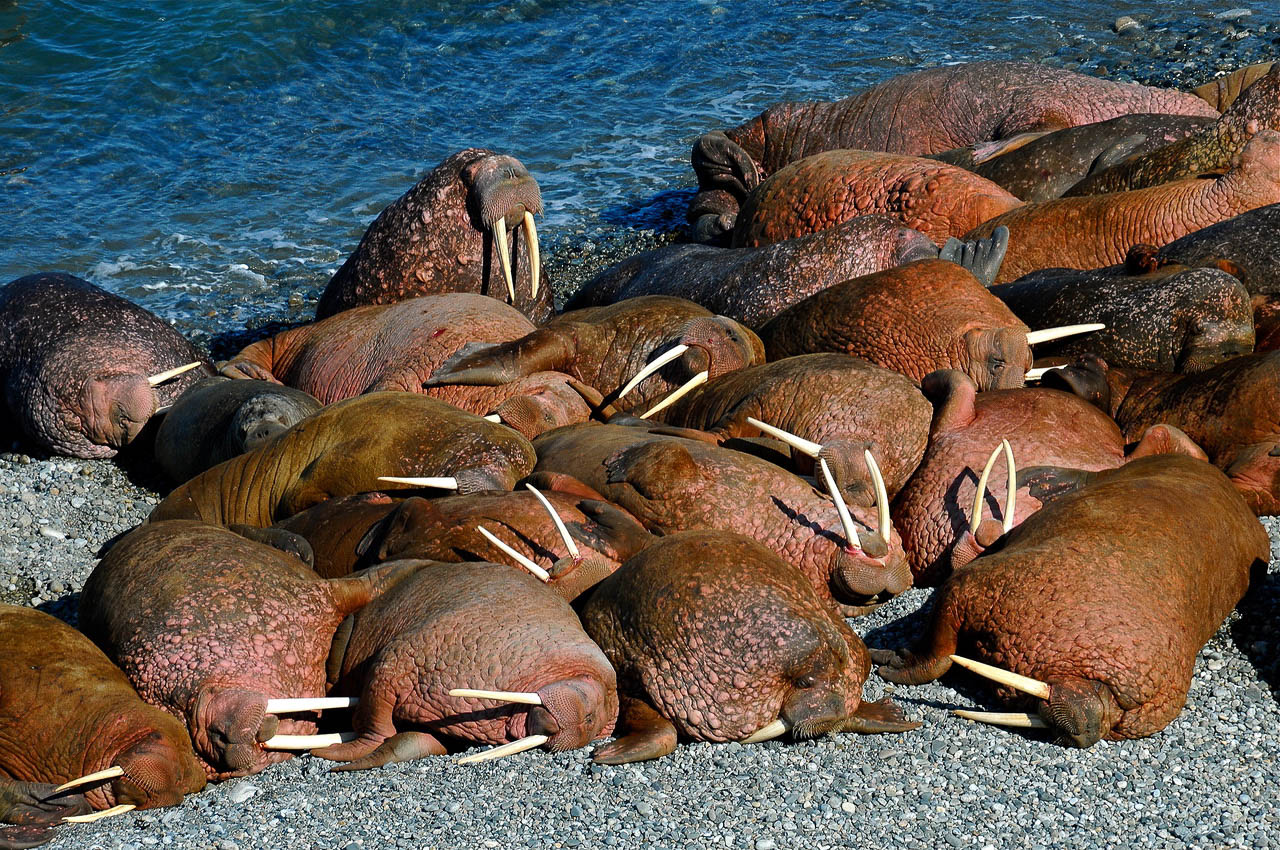 Walrus haul out along a beach on the Russian side of the Bering Strait. The bumpy pink skin is typical of male walrus’ in breeding condition.