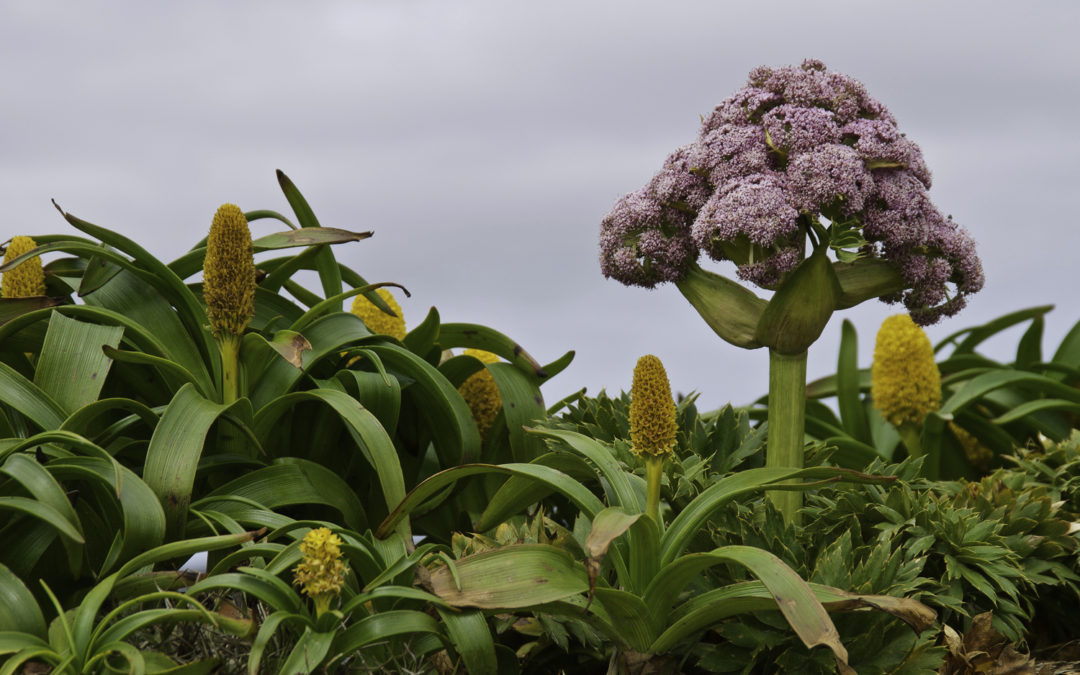 You know how much I enjoy questions! Yesterday’s ePostcard #37, Megaherb Mysteries, prompted lots of questions and encouraged me to dig into the most recent literature to find out what botanists are discovering about these fascinating plants. The term ‘megaherb’ was first used by James Clark Ross during his 1839-43 Antarctic expedition. The expedition’s British botanist, Joseph Dalton Hooker, wrote in his flora of the Auckland and Campbell Islands that the megaherbs produced “a floral display second to none outside the tropics.”

High winds and low temperatures typically encourage plants to stay small. Insect pollinators are few too, so flowering plants tend to be plainly colored (white is common) and most species rely on self- or wind-pollination. The megaherb flora of the Subantarctic Islands defies easy answers to these expectations. Jim and I spent 3 months on South Island in 1973 and met with two of New Zealand’s preeminent botanists, Peter Wardle and Alan Mark, kindred alpine plant enthusiasts who told us about megaherbs. About 25 years ago, Peter’s research on the megaherb species, Pleurophyllum speciosum, noted that the surface temperature of the corrugated leaves was 20 degrees C – much warmer than the ambient temperature. Wardle speculated that those hairs create “greenhouse spaces” that heat up the leaves.

Does it pay to be big, dark and hairy? The idea that hairy leaves and vibrantly-colored flowers heat up might seem a predictable discovery. Other studies have shown that dark colors better absorb solar radiation and leaf hairs trap heat within their folds. The plants’ bigger leaves might help capture as much heat as possible during the brief windows of sunshine. Extra heating would also keep the biochemical processes running in the leaves and flowers. Megaherbs in the subantarctic are not the only plants that have evolved hairy leaves and dark flowers to cope with low temperatures and scarce sunlight. Similar forms are also found in unrelated large plants in the tropical alpines of Hawai’i, Kenya and the Andes. These plants are called “giant herbs”. Both giant herbs and megaherbs have close relatives in milder environments, which stay small. Some alpine and arctic-focused botanists believe that the subantarctic megaherbs and the alpine giant herbs have converged on the same set of solutions to survive in cold, dim environments.

Lorna Little, a botanist who studied the plants for her PhD at the University of Otago in Dunedin, New Zealand commented: “It’s really lush and colourful, a striking contrast. For me, the megaherbs on Campbell Island are the equivalent of jungles in the subantarctic.” Little’s research found that all but one of the six megaherb species had flowers and leaves that were between 4C and 10C warmer than air temperature, substantiating Wardle’s earlier report. Over several weeks, Little took thermal images of six megaherb species. She used probes to compare real-time plant temperatures to air temperatures and the amount of sunlight available for photosynthesis. In thermal images of P. speciosum’s corrugated leaves, the hairy ridges shine as hotspots streaks of red-orange while the hairless valleys stay cool blue. “The leaves and flowers are where all the action is,” says Little. “Photosynthesis in the leaves feeds the plants while sex (pollination) occurs at the flowers.” Her research is published in the journal Polar Research.

So, what about megaherb pollination? The subantarctic region lacks butterflies and bees and the environment is characterized by high winds and low temperatures, unsuitable conditions for flying pollinators. Do subantarctic megaherbs, instead, rely on wind- or self-pollination? The answer appears to be no. Recent research on the insect fauna of Campbell Island provides some answers. In the absence of butterflies and bees, several other potential pollinators were commonly observed visiting flowers, including day-flying moths (Syrphidae), wingless flies (Dipterans), three beetle species (Coleoptera), and the wētā (a cricket-like Orthopteran). Wētā were probably present in ancient Gondwanaland before Zealandia separated from it. Wētās are nocturnal, and all New Zealand species are flightless. The Campbell Island wētā belongs to the family Rhaphidophoridae, the cave wētās, but unlike most wētā species its body is covered with numerous short hairs, a useful adaption for cold climates. Discovering that the Campbell Island wētā is a major flower visitor and a potential pollinator was surprising, partly explained by the fact that previous research had occurred during daylight hours. The researchers noted that the wētā were amply coated in pollen and highly active just below the Col-Lyall Saddle, even on a cold night, which suggests that the wētā might play a key role in the pollination of plants on other subantarctic islands. 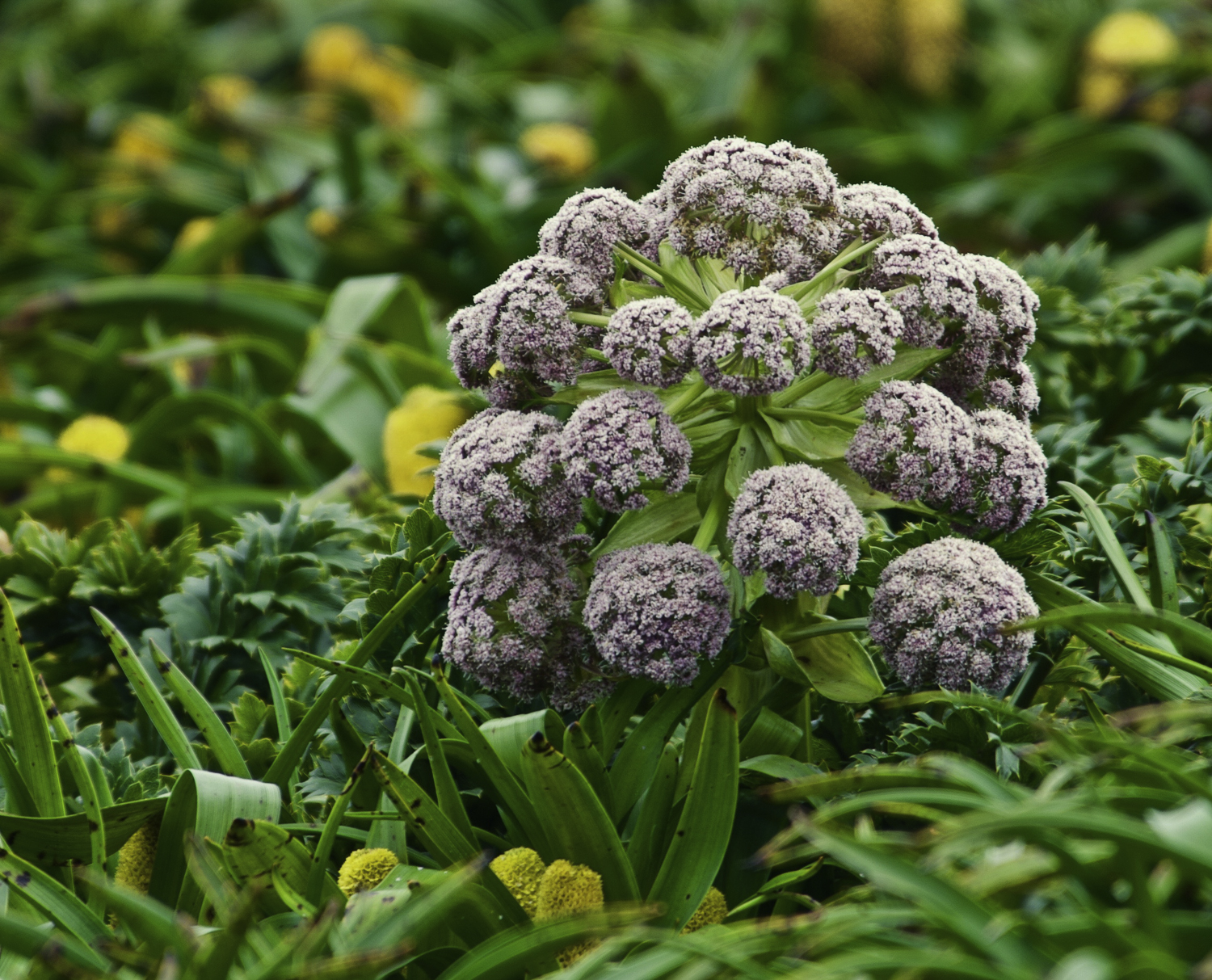