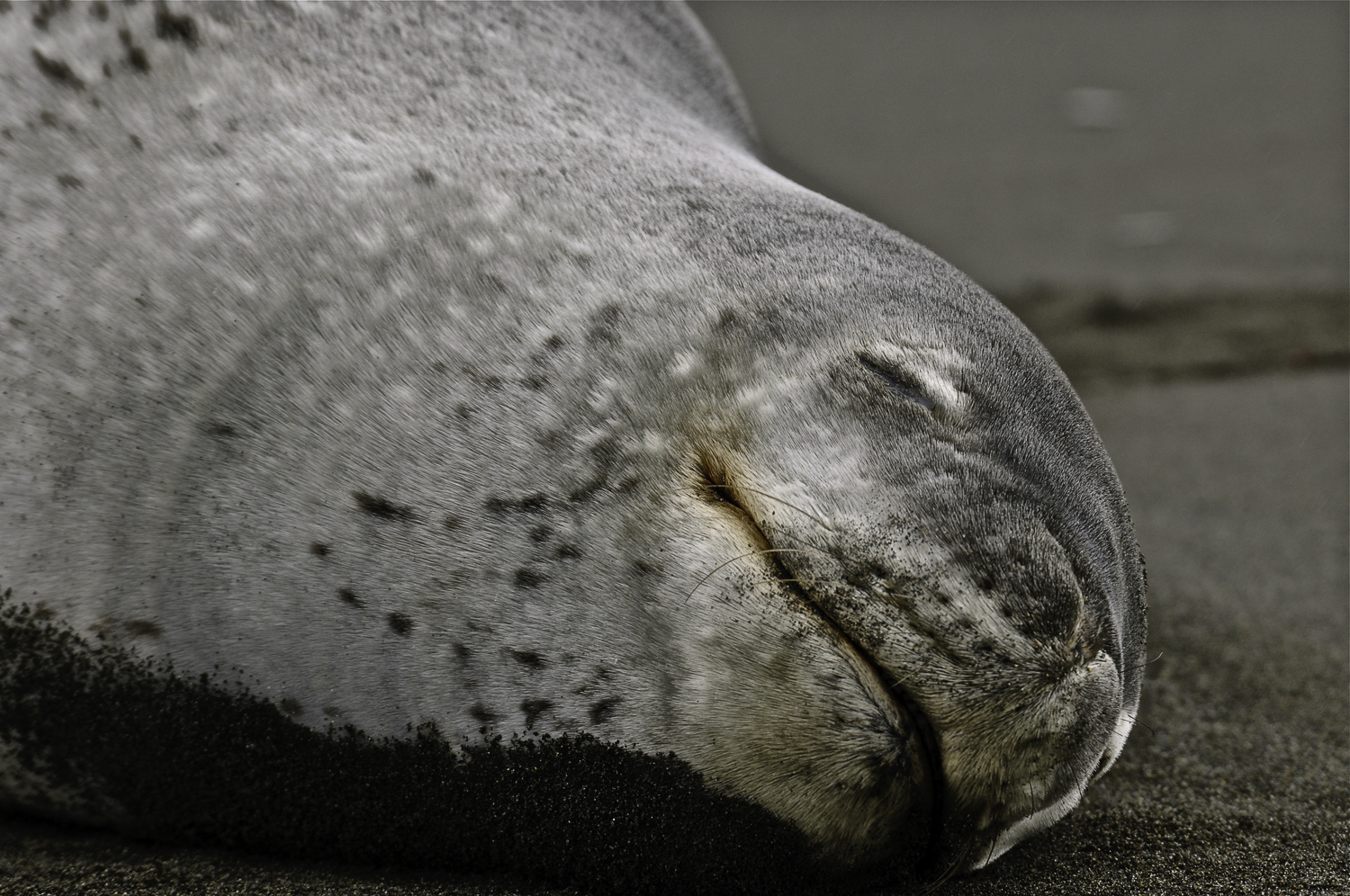 Spotting this young leopard seal asleep on the beach was a surprise, the cold gleam of the South Georgia sun turning its fur to burnished silver. Despite my efforts to quietly find a place to sit down and simply watch, I disturbed it. I could see the black “leopard” spots on its throat as it stretches up to assess my approach. I’m used to seeing them in the water as they hunt for unwary seals or penguins, their serpentine head and long, sinuous body slipping through the water like a seafaring python. This young leopard and I seemed to come to the same conclusion about social-distancing pretty quickly—“harmless” until one of us violates the comfort zone. When it comes to interactions with humans, leopard seals can be both curious and aggressive, and being situationally aware means that you give them plenty of space, whether you are in a Zodiac, a sea kayak, or on foot. A full-grown adult will be about 11 feet long, and may weigh as much as 1,200 pounds (females are larger than males). The last photo (#6) in this series is from my kayak and the seal was asleep at the surface with only its nose out of the water. Fortunate to spot it in time, I back-paddled slowly and safely out of the kelp and it never even opened its eyes.

Leopard seals have a circumpolar distribution in the pack-ice zone but can be found in small numbers on all subantarctic islands, and wanderers sometimes turn up along the southern coastlines of Argentina, Chile and even Australia. The global population is thought to be in the range of 200,000-400,000. The napping leopard seal in photo #5 is molting. Breeding has never been reported on South Georgia, and most of the leopards that show up there are comparatively young. These seals are normally solitary, hauling out on beaches, rocky shorelines or ice floes, and seeing them sleeping is not uncommon. In spring and summer, leopard seals focus their hunting on penguins and seals and are often spotted lurking just off shore from the colonies, waiting for the unwary. I’ve never observed them hunting penguins myself, but I’ve been told that they make quick work of it, grabbing the penguin in their powerful jaws and then rising to the surface, where they violently thrash it about and then rip it apart. Fish and krill are the primary food during the winter months. Much like the crabeater seal, leopard seals have cusped, interlocking teeth that help them sieve krill out of the water. Leopards are highly vocal underwater during the breeding season, but are notoriously silent when they are out of the water, leaving the bellicose roaring to the southern elephant seals. 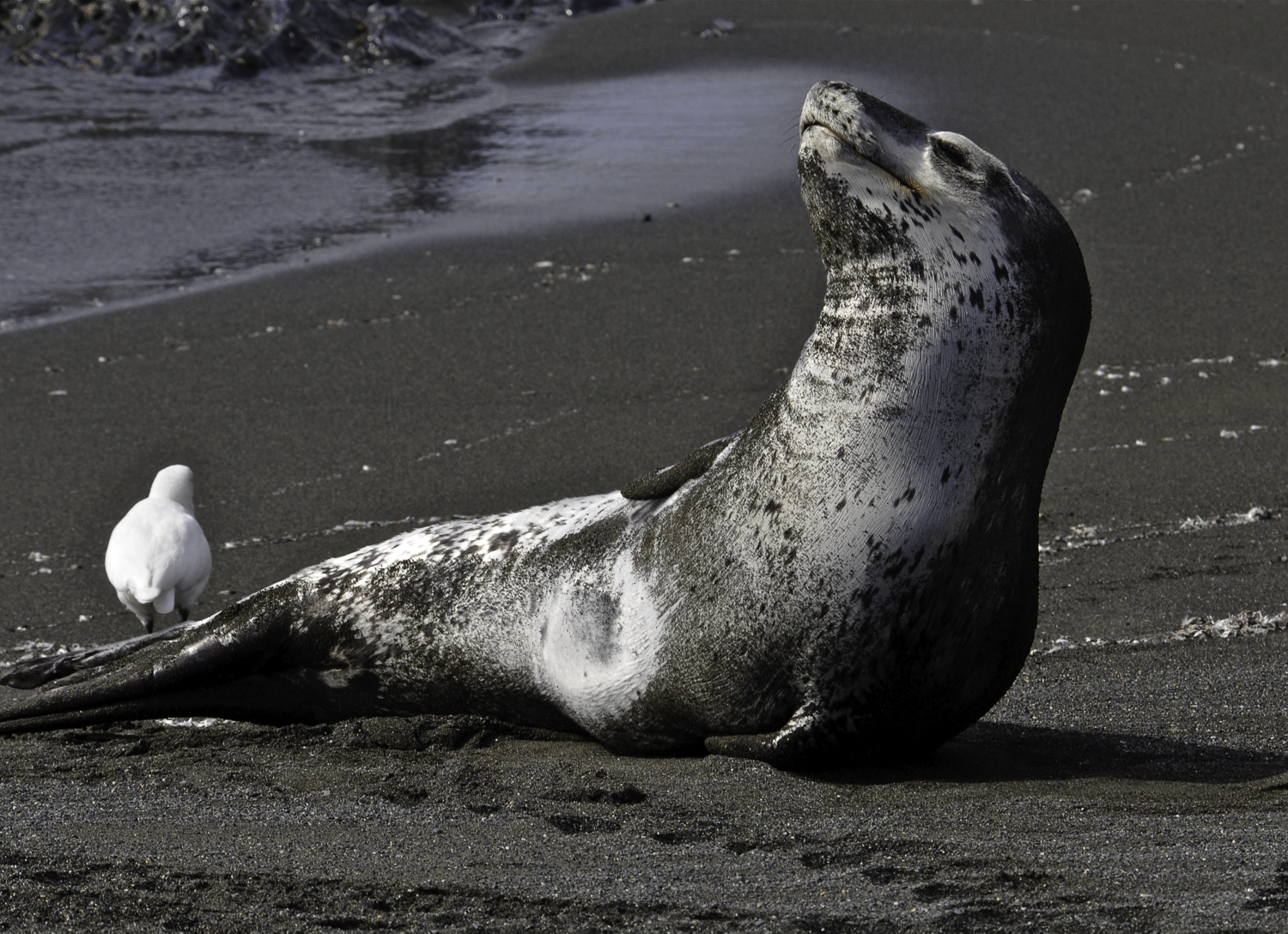 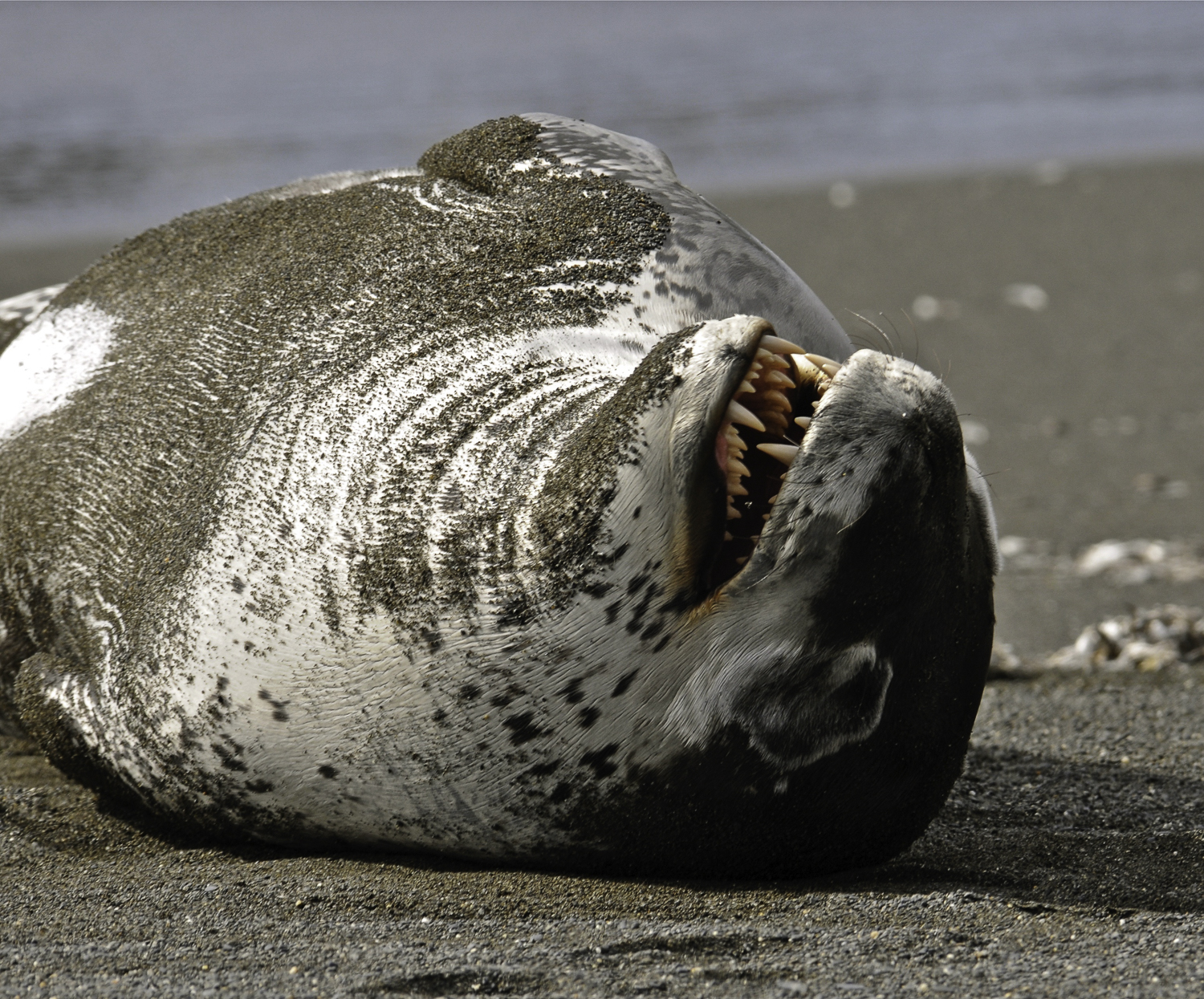 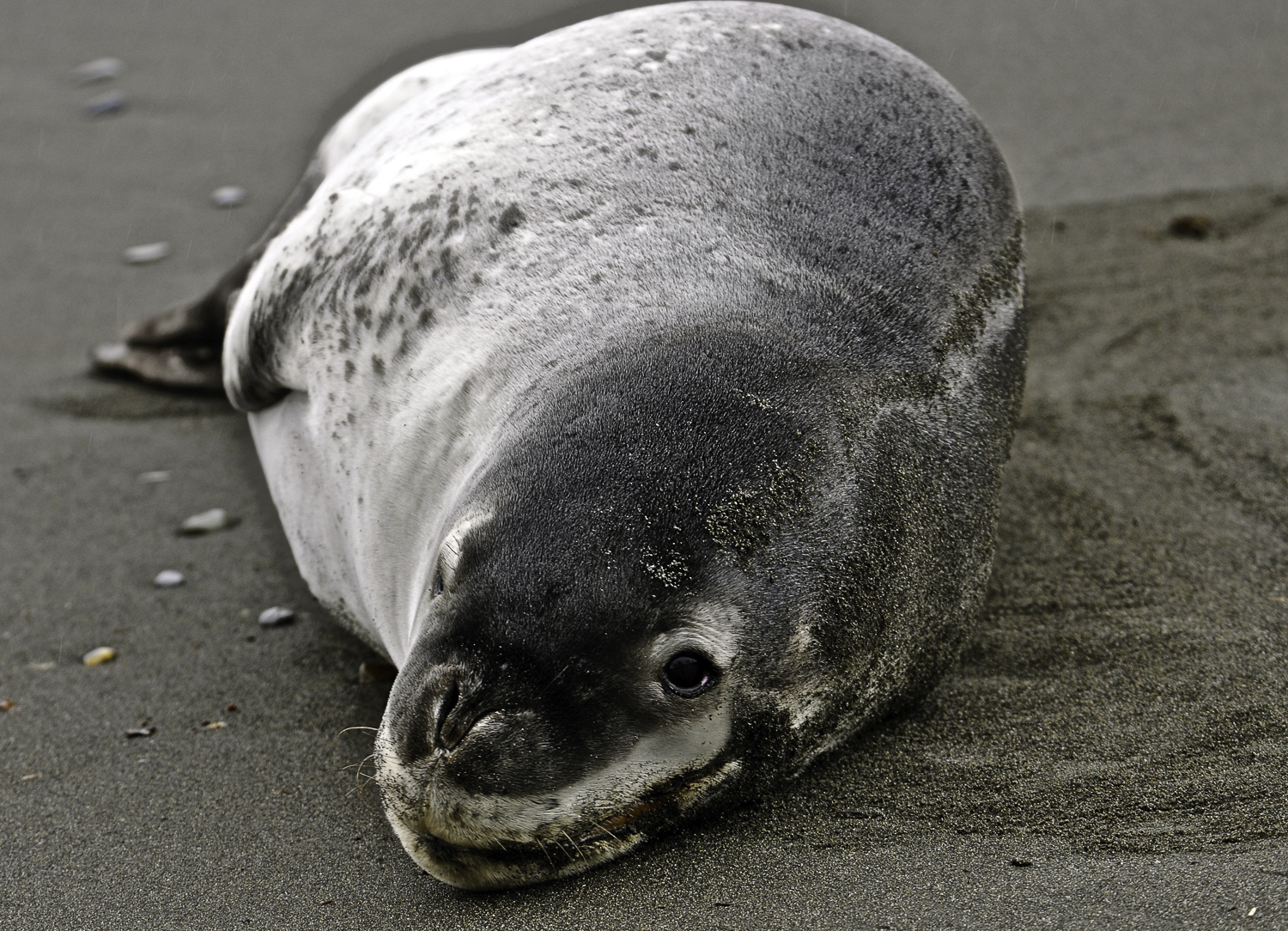 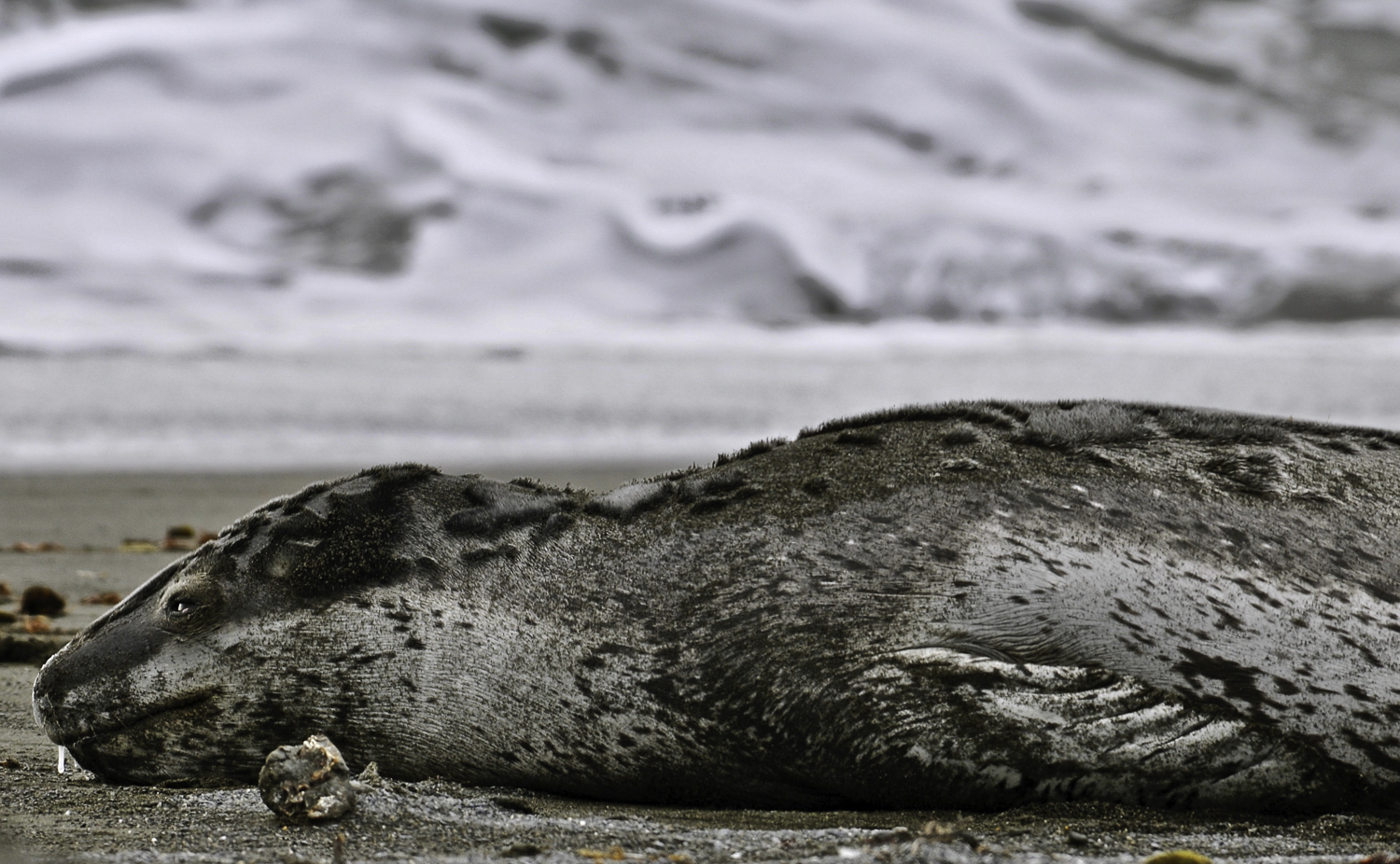 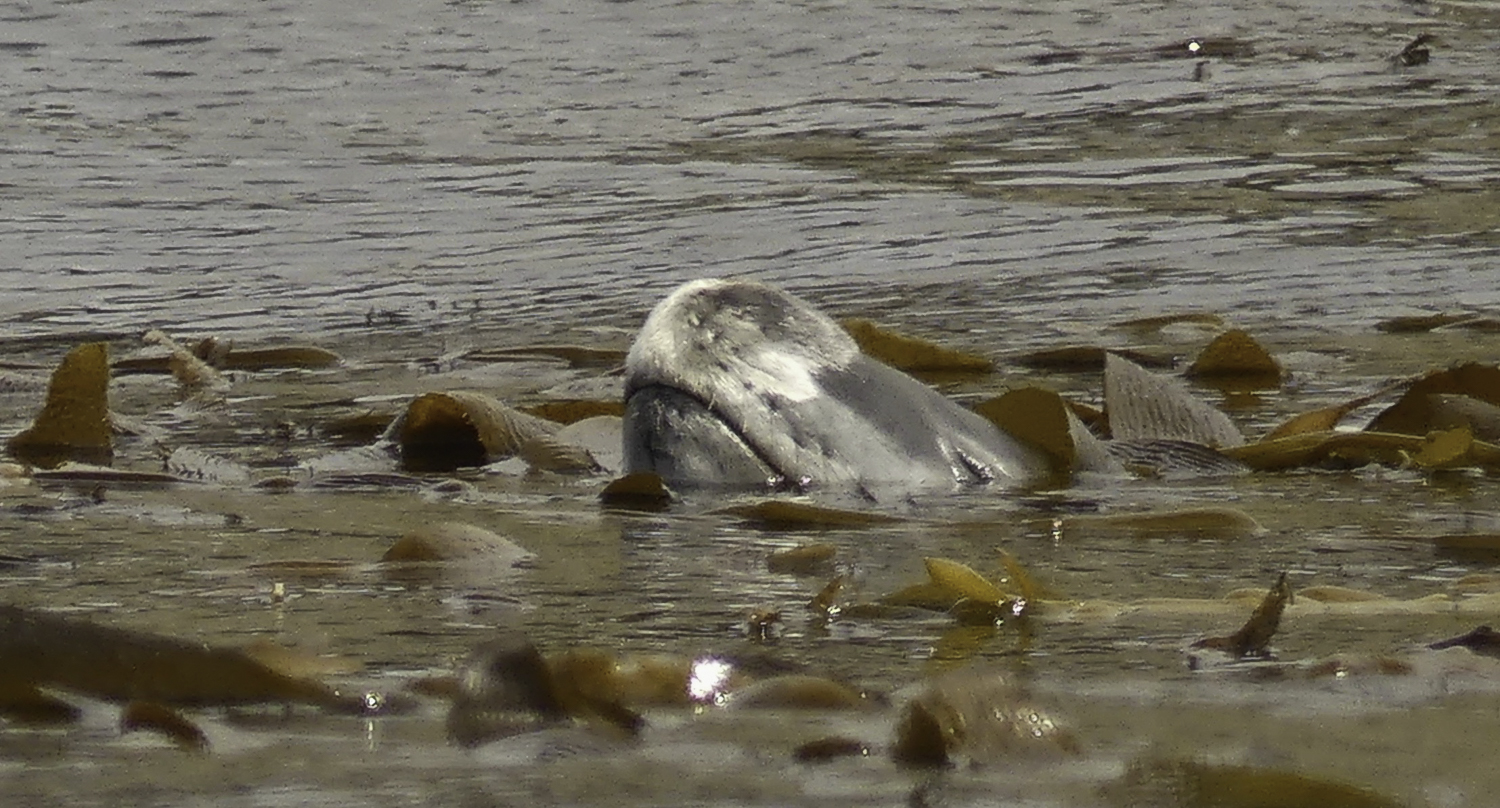