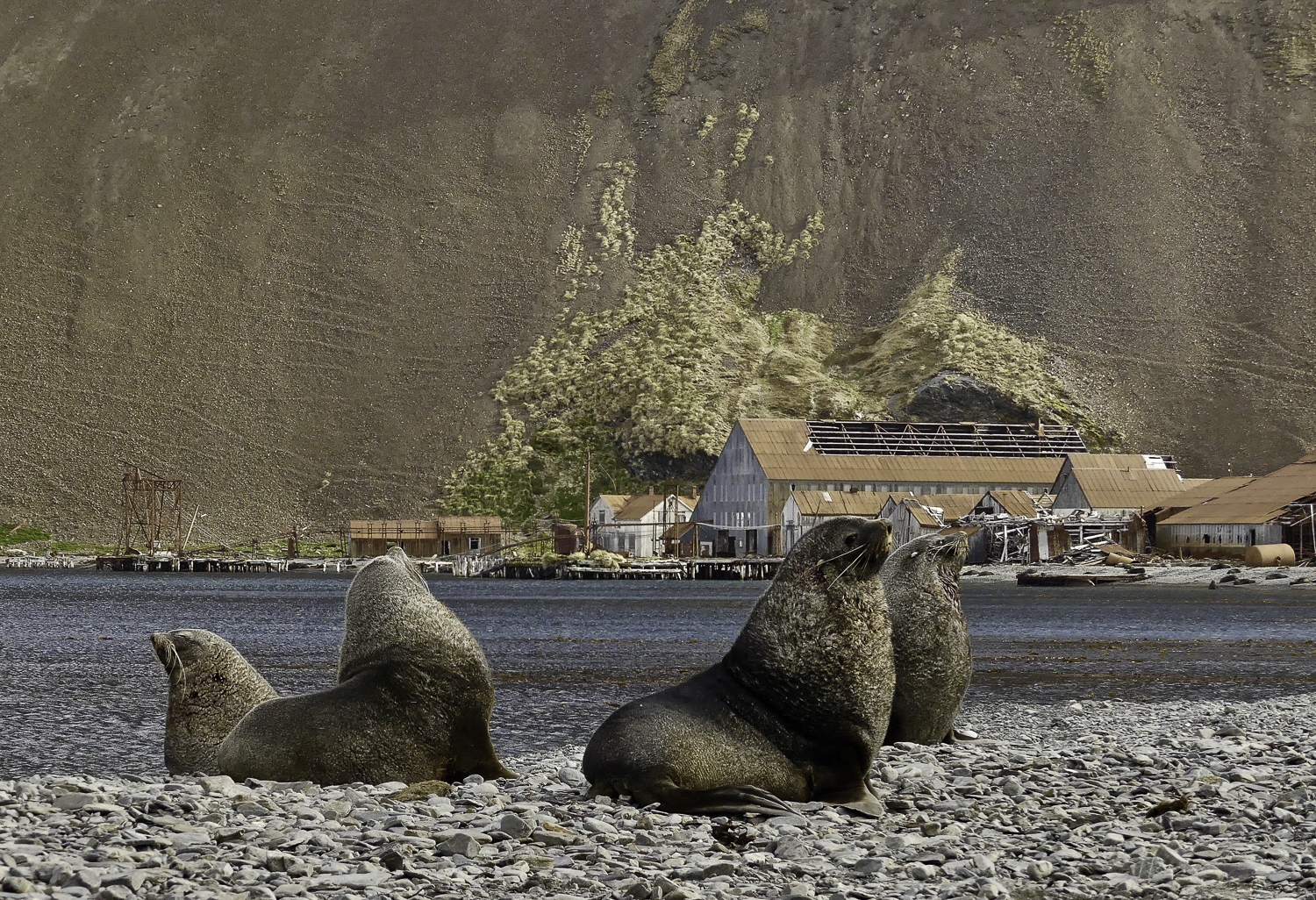 When British explorer Captain James Cook visited South Georgia in 1775, he noted the island’s abundant population of both Antarctic fur seals and southern elephant seals. In 1788, some 13 years after Cook’s visit, British sealers arrived from South America, followed by others from North America in 1791. The sealing industry first targeted the fur seals, which were clubbed or lanced to death and then skinned. Skins were washed in salt water and salted before being packed into barrels and shipped to Europe, North America and China. The competition between sealers was intense and there was much secrecy around early sealing activities, so it is unlikely that the full extent of sealing during the early years will ever be known. In 1800 Captain Fanning from the Aspasia recorded taking 57,000 fur seal skins, probably the largest single haul taken from South Georgia. In 1825, James Weddell, then a sealer, estimated that 1,200,000 fur seal pelts had been taken from South Georgia in total. By the early 1900s Antarctic fur seals had been hunted to virtual extinction and sealing was no longer economical. From 1908 to the mid-1960s, British legislation moved forward progressively to protect all of the breeding grounds of the Antarctic fur seal in the South Atlantic Ocean, which enabled fur seal populations to recover. It seemed so fitting to see these four fur seal bulls guarding the beach at the long-abandoned Stromness Whaling Station in 2018 (photo #1 above).

Antarctic fur seal bulls are majestic and their presence on any beach is commanding. Adults reach a length of about 7 feet and mature bulls tip the scales at over 440 pounds. About 1 in 1,000 of this species, like the majestic bull in the foreground of my photo #3, will have pale blond fur. Antarctic fur seals often stay at sea for weeks at a time, and are excellent swimmers and divers. Krill makes up nearly all of their diet, but they also eat fish, squid, penguins and other seabirds. A single fur seal can eat a ton—literally—of krill each year. Most foraging dives last about four minutes and reach a depth of nearly 100 feet. The known record for an Antarctic fur seal dive is 590 feet and the longest known dive is about 10 minutes! Antarctic fur seals are hunted by sharks, killer whales, and the pups are vulnerable to leopard seals.

When it’s time to breed, Antarctic fur seals return to the place of their birth. There are fur seal rookeries on several islands within the Antarctic convergence zone. One of the largest rookeries is on South Georgia. The breeding season begins in late October and continues through December, with the dominant bulls fighting each other for the right to rule harems of up to 20 females (the rare harem includes up to 100 females). These battles can be extremely aggressive, and some encounters result in serious injuries and sometimes death. Once they’ve established a harem, bulls will continue to protect their breeding territory and will stay on land up to 2 months without feeding. The females in the harem are already pregnant from the previous year’s season when they arrive at the colony, and give birth in November or December. They will mate again about a week after giving birth. Once their pup is born, the mother will head out to sea to forage for food to sustain her ability to nurse her pup. If the availability of food (krill and fish) changes, either by relocation or if there is simply less available, it makes survival more difficult. When this happens, the mothers will stay at sea longer to find sufficient food, which leaves the pup vulnerable. The pups are nursed by their mothers for about 4 months. Once they’ve learned to swim they will usually remain at sea for several years until they reach sexual maturity, when they return to their natal beach at the start of the breeding season. Antarctic fur seals are essentially loners outside the breeding season, but will sometimes congregate in vast numbers on beaches near good feeding grounds in the autumn and early winter. 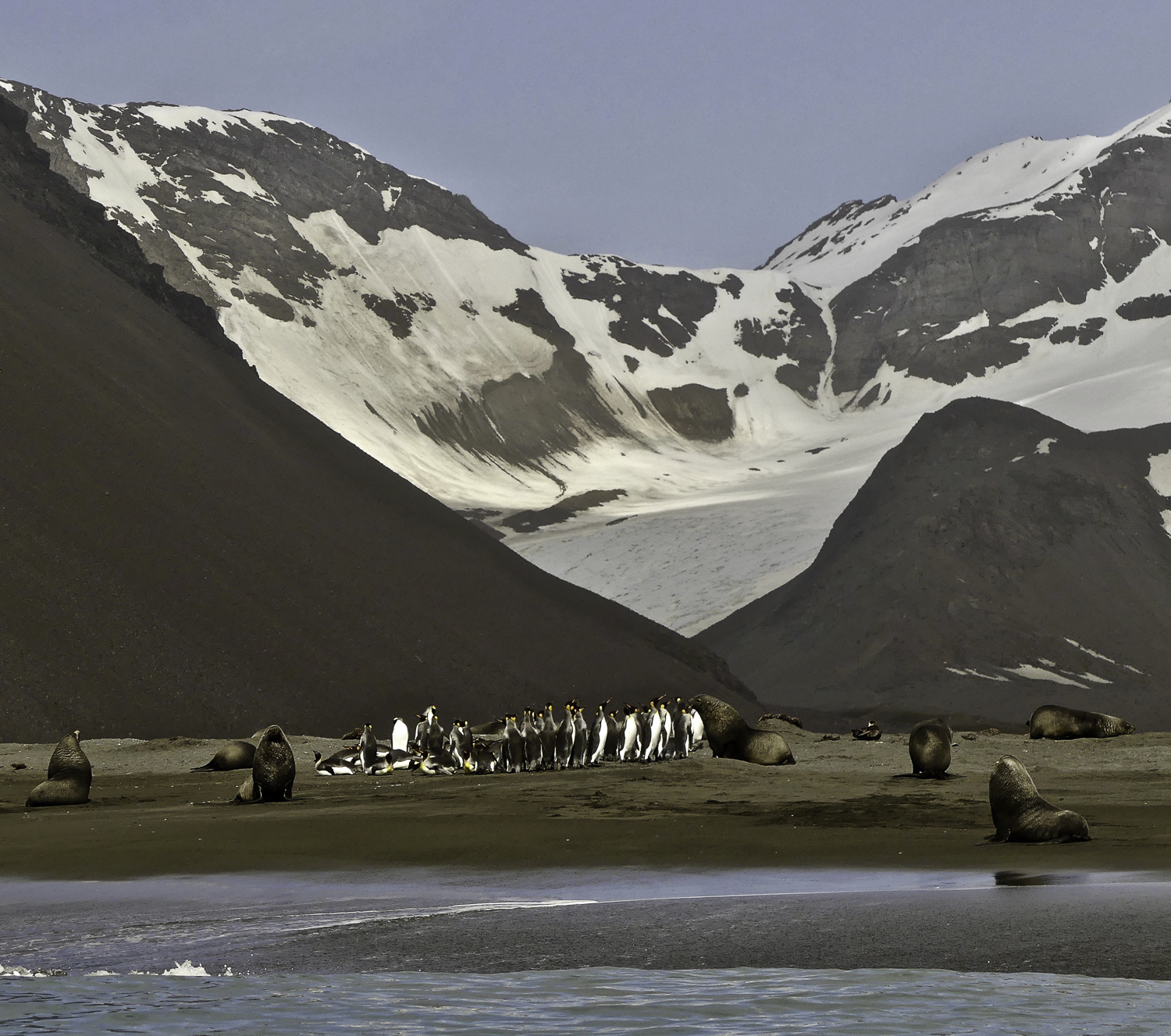 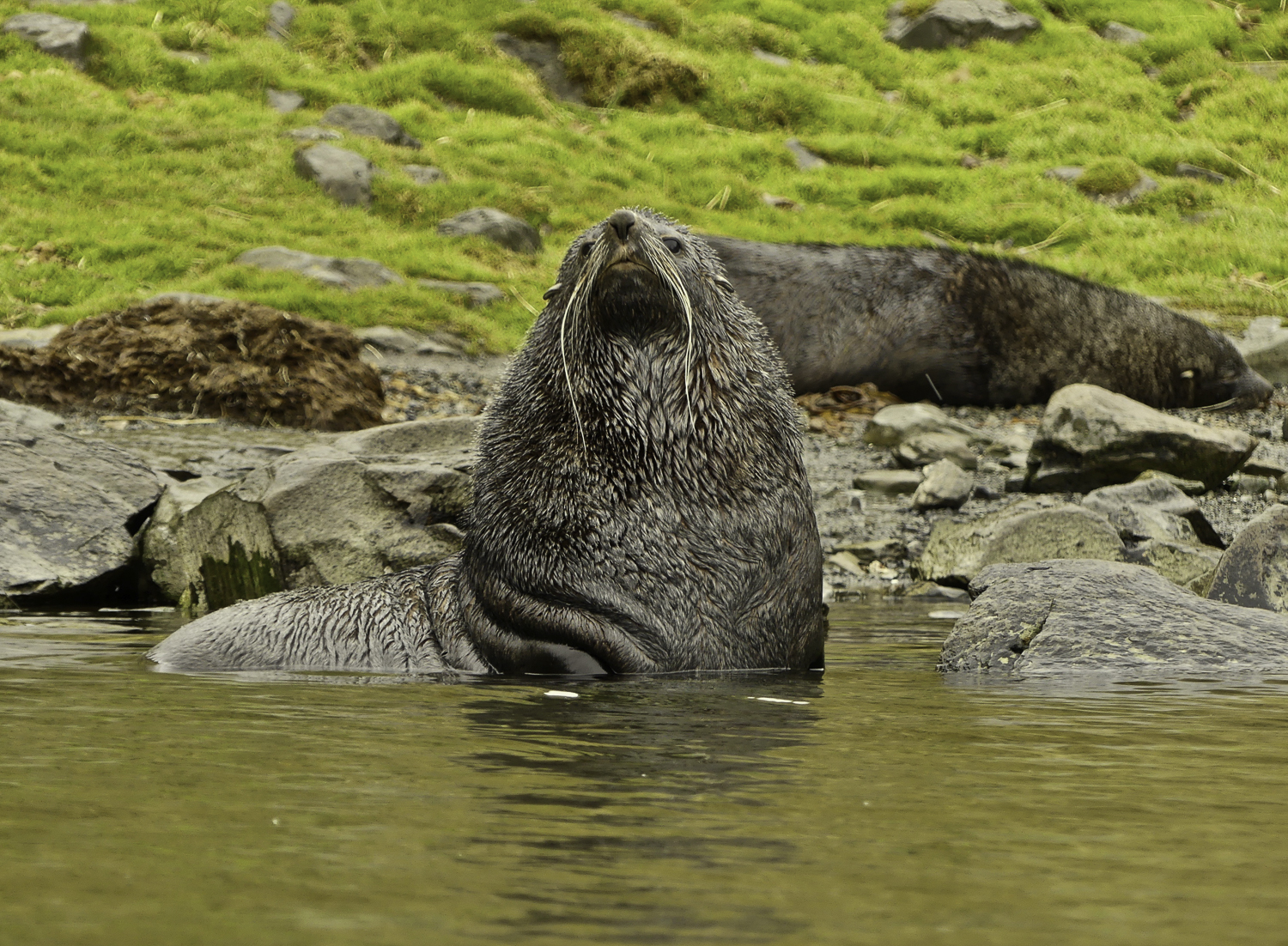 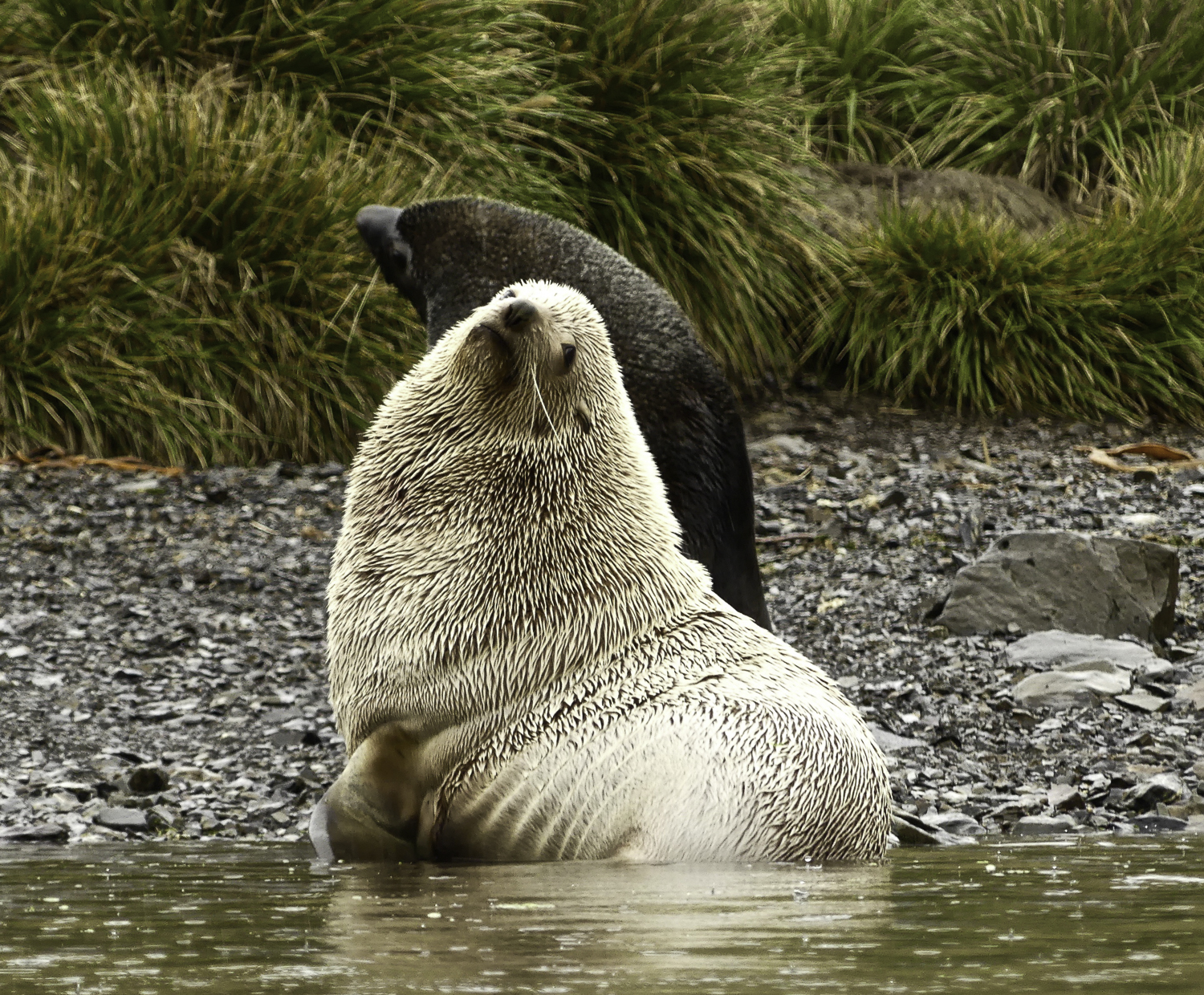 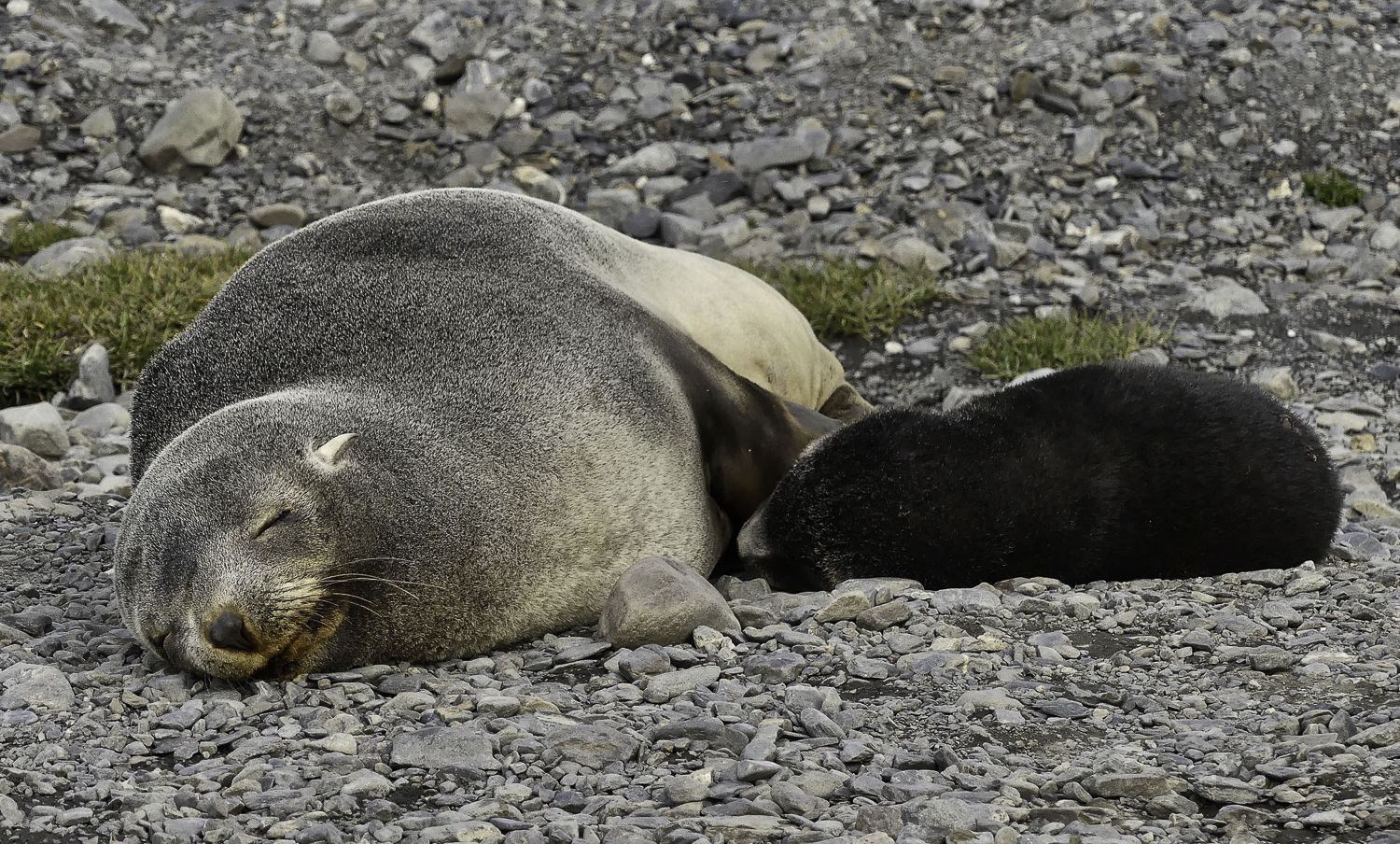