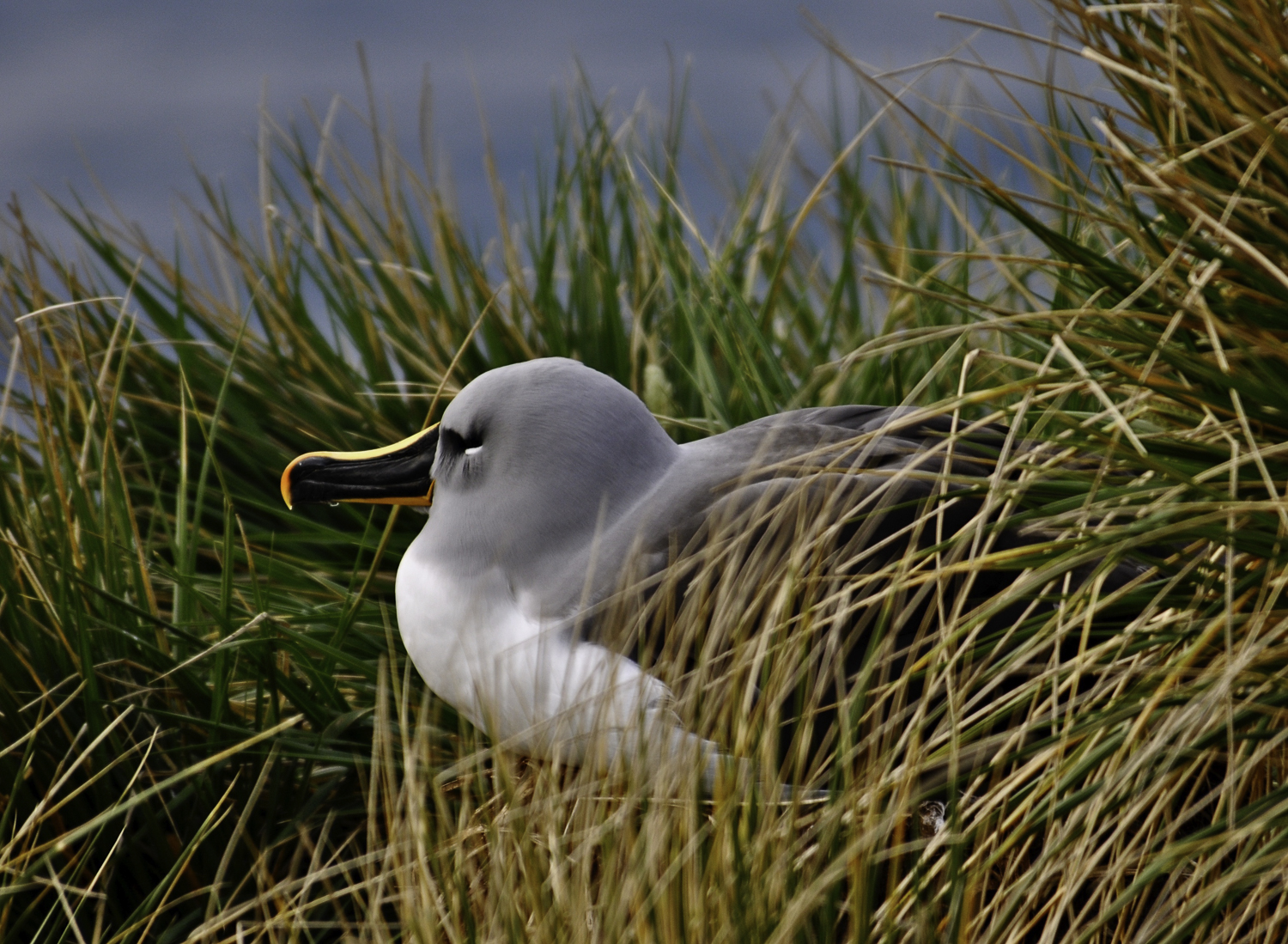 Albatrosses are some of the most iconic species in the Southern Ocean, but they also serve as sentinels for the challenges faced by albatross populations worldwide. South Georgia is home to globally significant breeding populations of the grey-headed (50% of world population), wandering (18% of world population), and black-browed albatross (12% of world population). With a prime location near the productive ocean currents of the Antarctic convergence, South Georgia and adjacent Bird Island are among the handful of subantarctic islands where albatrosses can breed and rear young. But these albatross species have not escaped the so-called “incidental” mortality during commercial fishing operations, known as bycatch, which has resulted in widespread population decline in albatross species worldwide. Some researchers assert that an albatross dies somewhere in the world’s fisheries every five minutes (c.100,000 deaths a year). Albatrosses are the world’s most threatened family of birds. Of the 22 species, IUCN Red List has listed 17 as ‘Threatened with extinction’ and the remaining five are considered to be ‘Near-threatened’. Research led by scientists at the British Antarctic Study, recently confirmed that all 3 of South Georgia’s albatross species experienced steep population declines—44% (grey-headed), 18% (wandering) and 19% (black-browed)—over the past 11 years.

South Georgia hosts approximately half the global population of grey-headed albatross (photo #1), the remainder breeding at Crozet, Kerguelen and the Prince Edward islands in the southern Indian Ocean, Macquarie and Campbell islands in the South Pacific, and Diego Ramirez and Ildefonso in southern Chile. At South Georgia, the grey-headed albatross breeds at nine locations, sometimes in mixed colonies with the black-browed albatross. All of these breeding sites are located in the northwest of the archipelago, with the largest colonies on Bird Island, the Willis Islands and the Paryadin Peninsula.

South Georgia currently supports the third largest breeding population of wandering albatrosses in the world, after the Prince Edward and Crozet Islands. The majority of the South Georgia population is located in the northwest of the archipelago and on Annenkov Island. The Wandering Albatross has the largest wingspan of any bird on earth. It takes 9-11 years for individuals to reach sexual maturity, and they may live up to 80 years or more. Highly pelagic, it spends the majority of the year wandering the southern oceans, coming to land only once every two years to breed. Nests are placed on slopes with sparse grass tussocks and with an exposed site for easy takeoff.

The majority of the global breeding population of black-browed albatrosses occurs in the Falklands (c. 72%), the islands of southern Chile (c.19%), but a significant population also breeds at South Georgia (c. 8%), where the species is known to breed at about 20 locations on the mainland and offshore islands of South Georgia, sometimes in mixed colonies with the grey-headed Albatross. The majority of these breeding sites are located in the northwest of the archipelago. All three albatross species are long-lived, have high adult survival rates, delayed sexual maturity and lay single-egg clutches. The wandering and grey-headed albatross breed biennially if successful in raising a chick. The black-browed albatross breeds annually, although 25-33% of breeders at South Georgia defer breeding the following year.

The conservation challenge for biologists is tackling at-sea threats to these albatrosses. The albatross populations that breed on Bird Island, which include the wandering (700 pairs), grey-headed (3,000 pairs), and black-browed (7,000 pairs), have been monitored by researchers since 1972. Studying more than 36,000 birds, researchers found that survival rates were declining in both adult and juvenile albatrosses. They attributed the results to two key factors: fishing bycatch and climate change. Bycatch occurs when fishing boats pull in their gear and catch anything other than their target species, which can include “non-target” types of fish, seabirds, sea turtles, dolphins, and porpoises. Although seabird bycatch has been reduced to negligible levels in the fisheries operating around South Georgia, wider implementation of effective seabird bycatch mitigation measures is required to improve the conservation status of the South Georgia populations of wandering, black-browed and grey-headed albatrosses, which travel well beyond South Georgia’s protected waters in their search for food.

The wandering albatrosses that breed on South Georgia range widely in the southwest Atlantic, where their pelagic travels overlap with a number of fishing fleets. On the basis of studies conducted to date (during the albatross breeding season), the pelagic longline fleets from Japan and Taiwan are critical to any effort to control bycatch because they comprise the largest fleets in the Atlantic. Overall, given the albatross’s limited overlap with trawl fisheries, bycatch in longline fisheries has been shown to be one of the main drivers of the decline in the wandering albatrosses that breed on South Georgia.

In the photos below, spend a morning with me on South Georgia hiking up through the tussocks to locate a small breeding colony of wandering albatrosses. We surprise a grey-headed albatross on nest duty (photo #1) and watch the mate soar off the cliff (photo #2) to forage at sea. Climbing still higher (photo #3), I see that my late husband Jim has reached the ridge top (photo #4) and his smile tells me that he has spotted the colony. We settle into the tussocks a good distance away from the nests so as not to disturb the young albatrosses (photos #5,6,7). The juveniles are clearly awaiting the return of their parents with the first meal of the day. Ever hopeful, we listen and watch—the morning chorus of pipits greeting another perfect day. 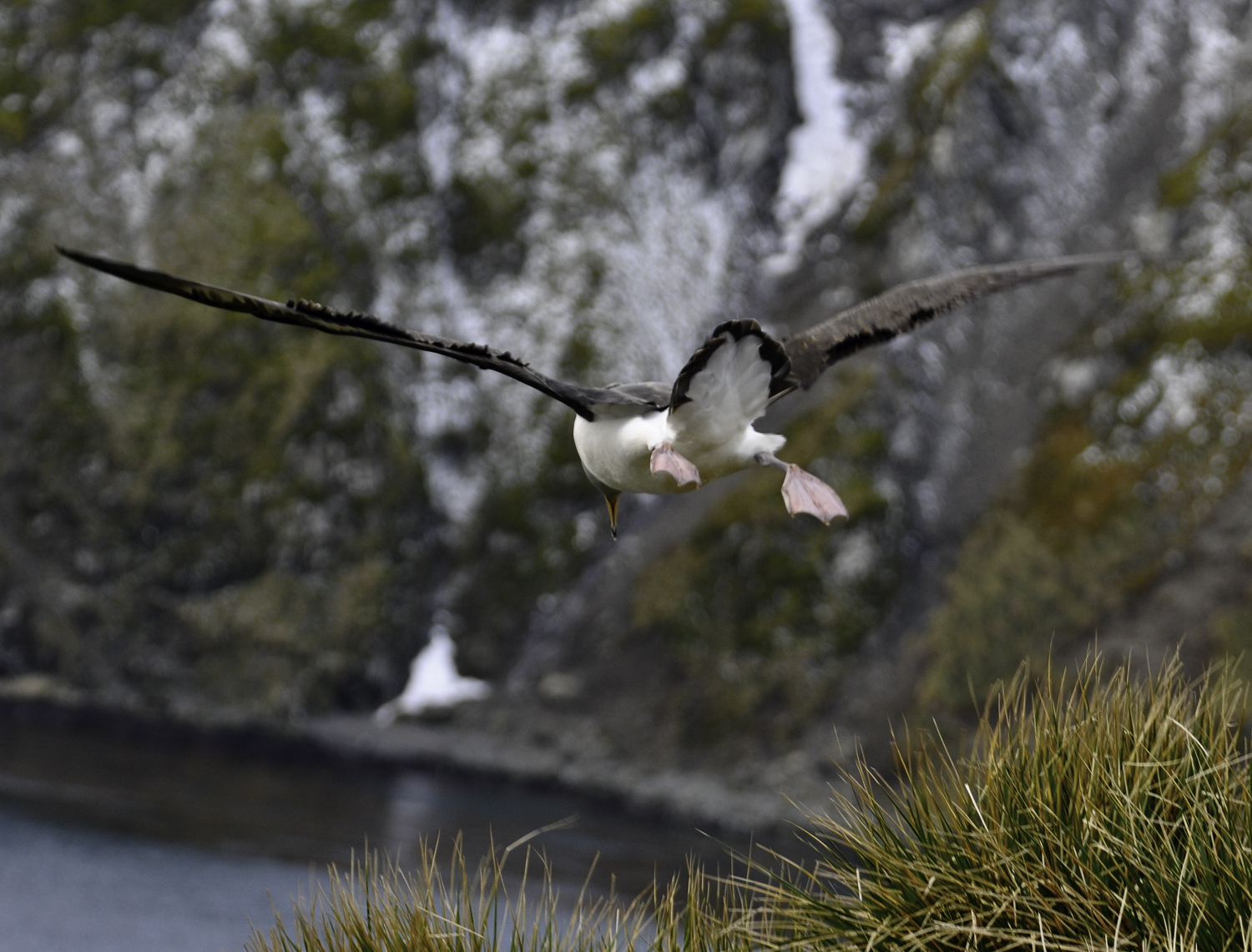 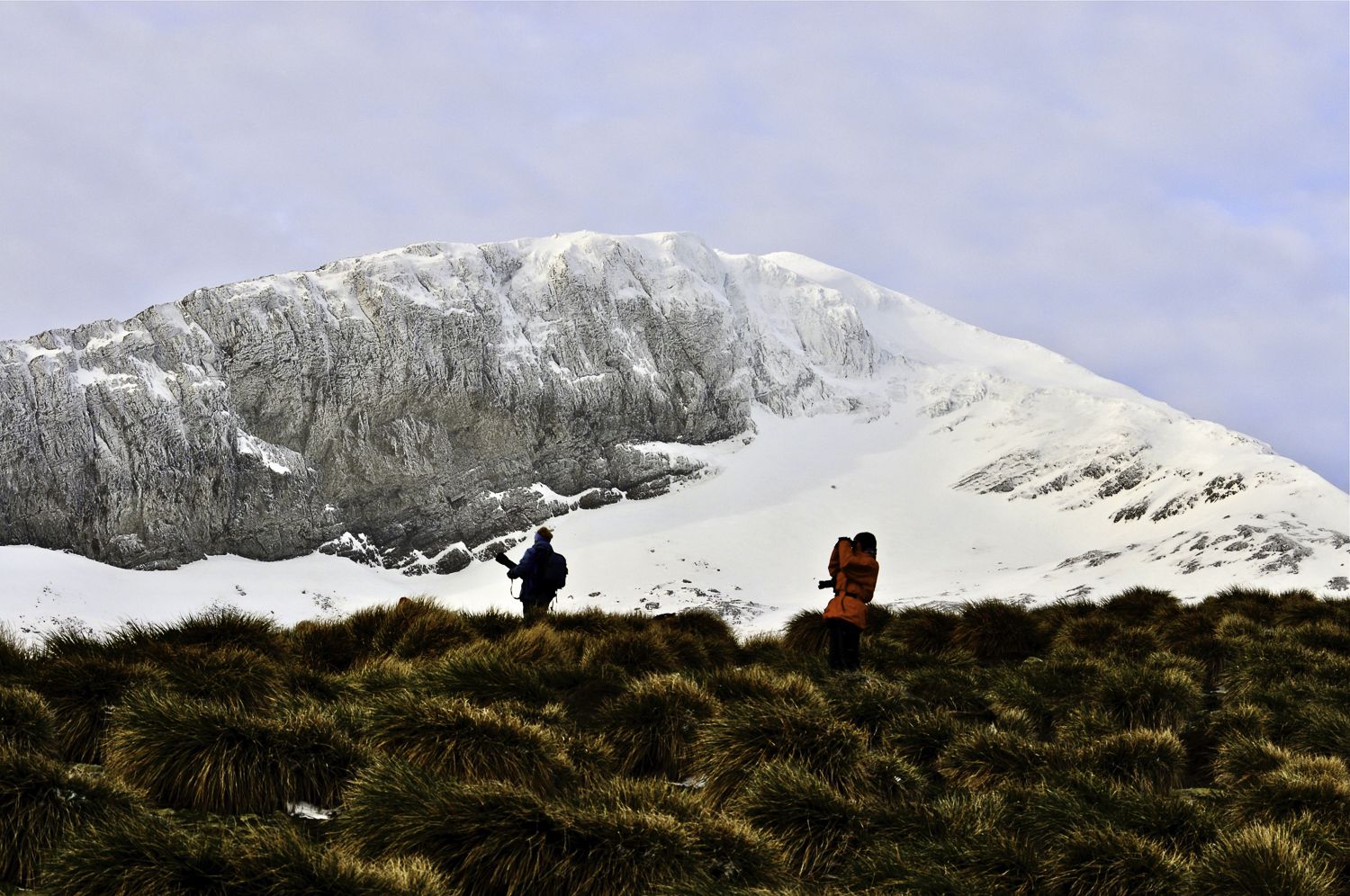 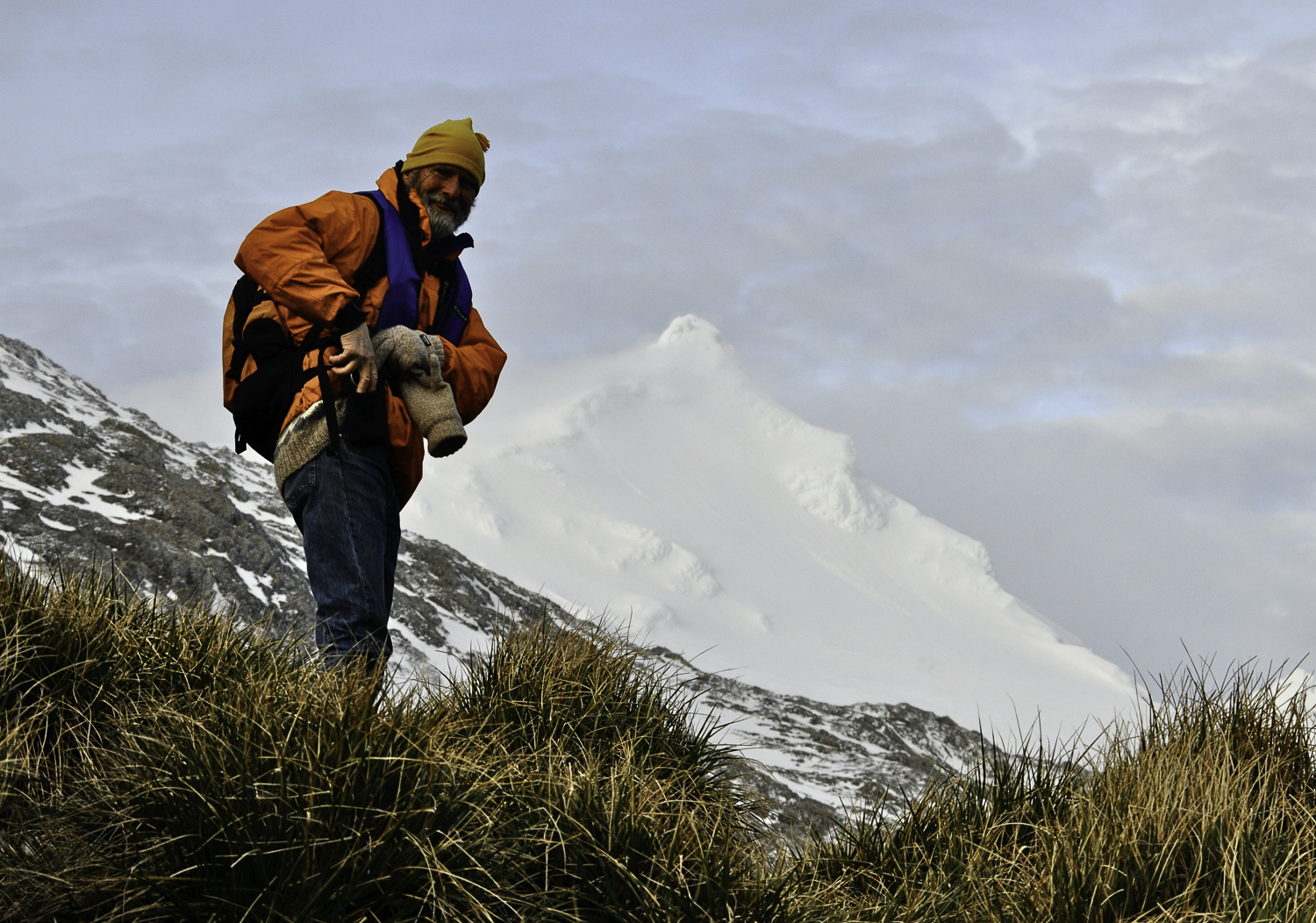 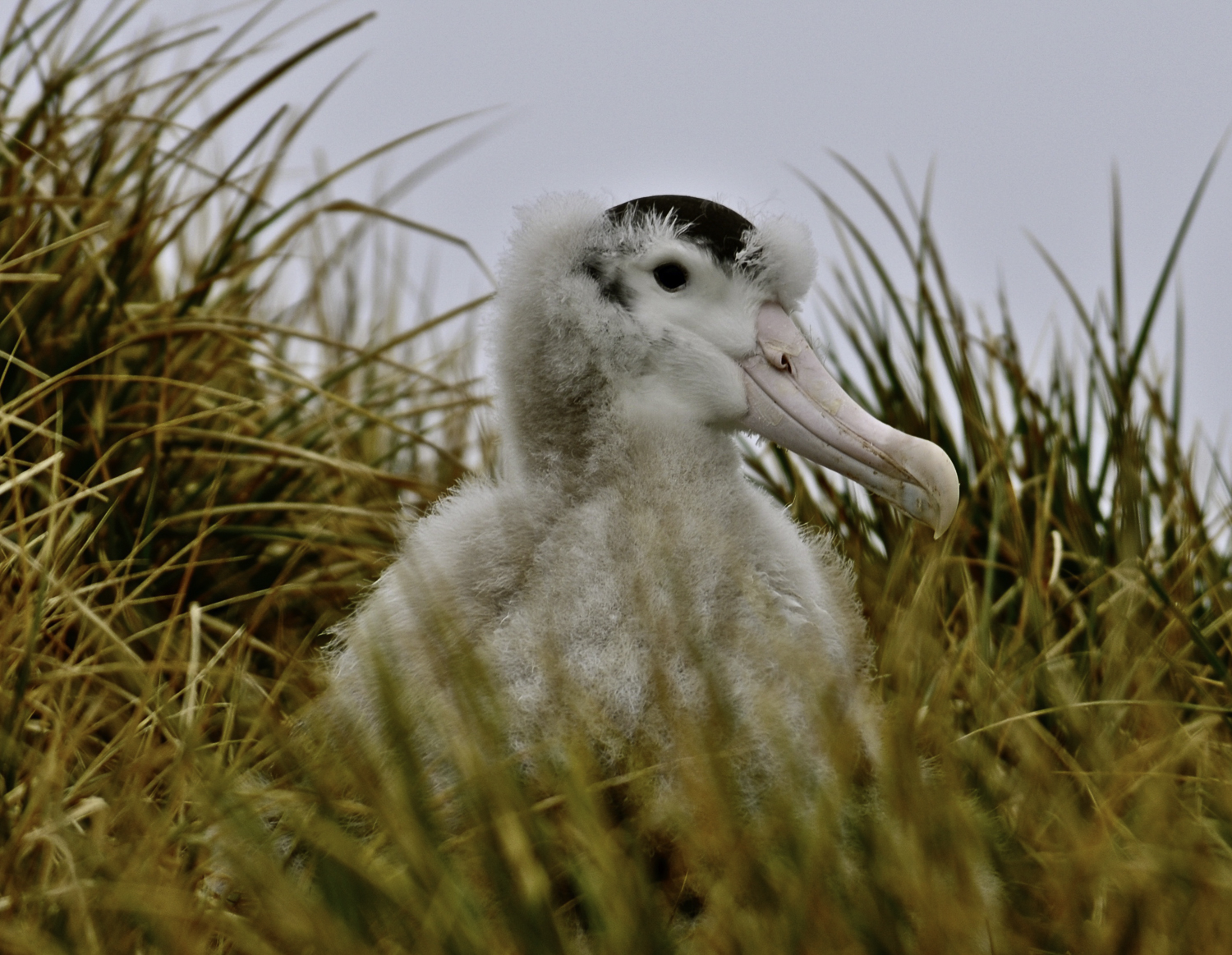 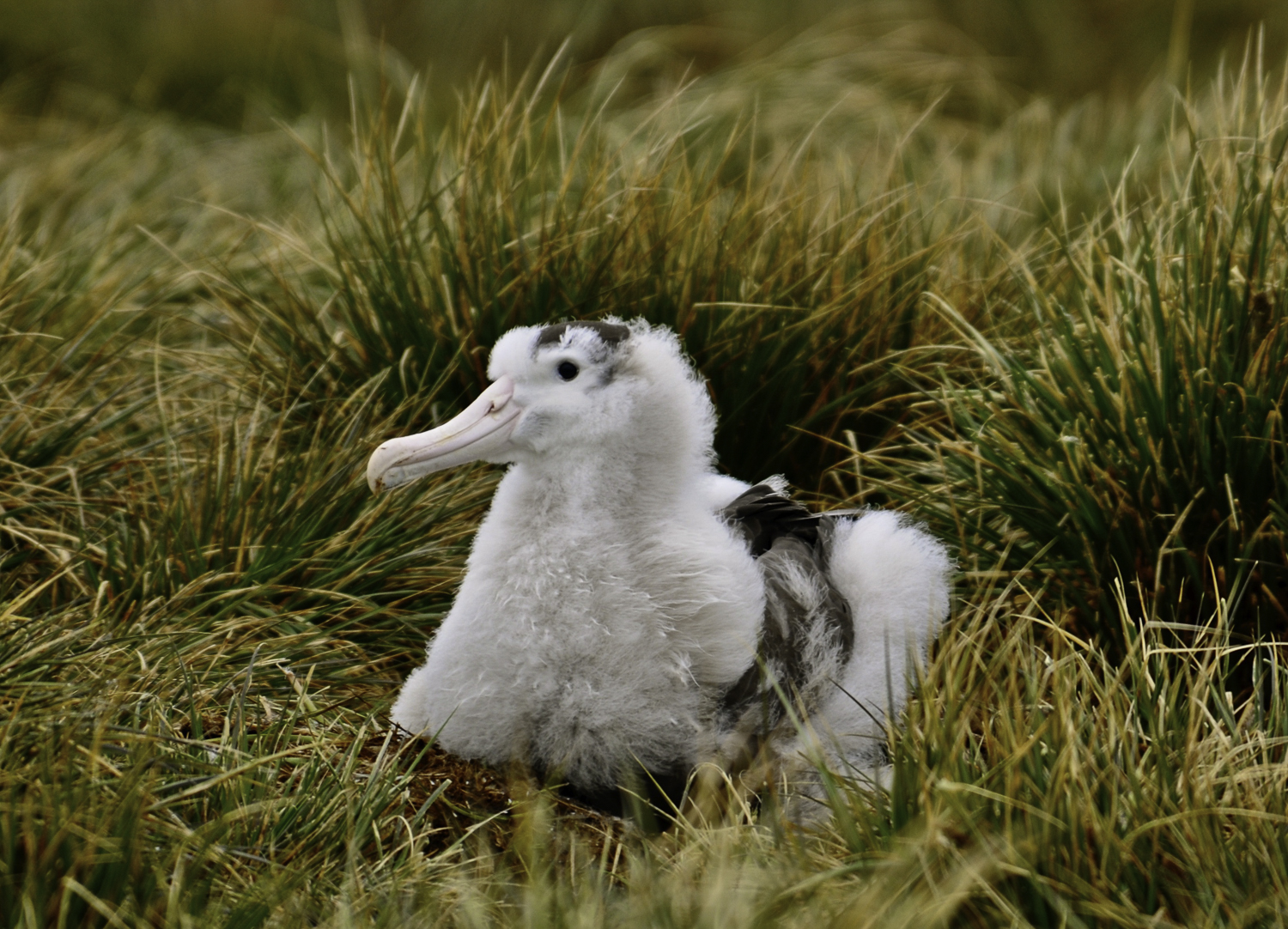 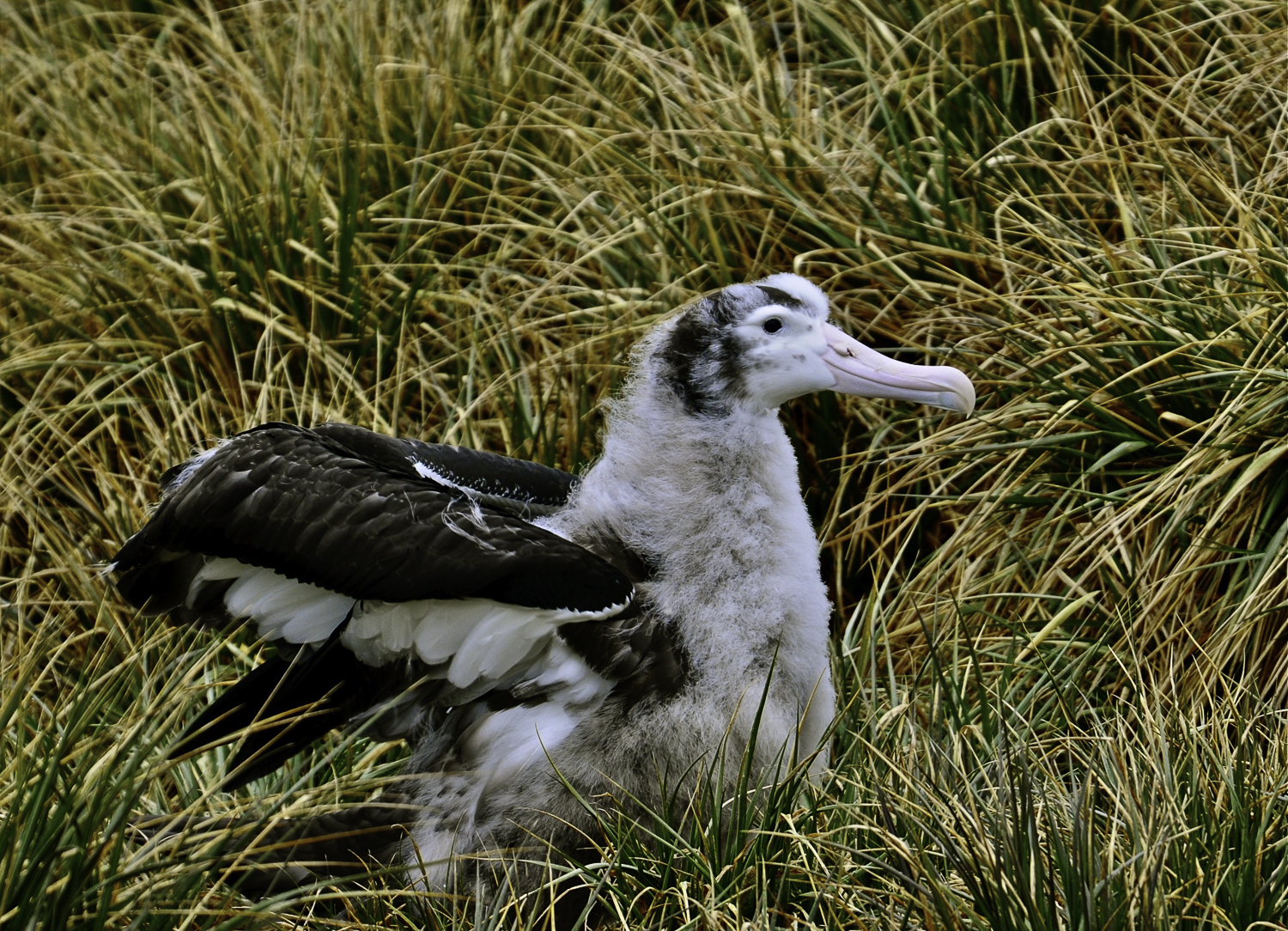