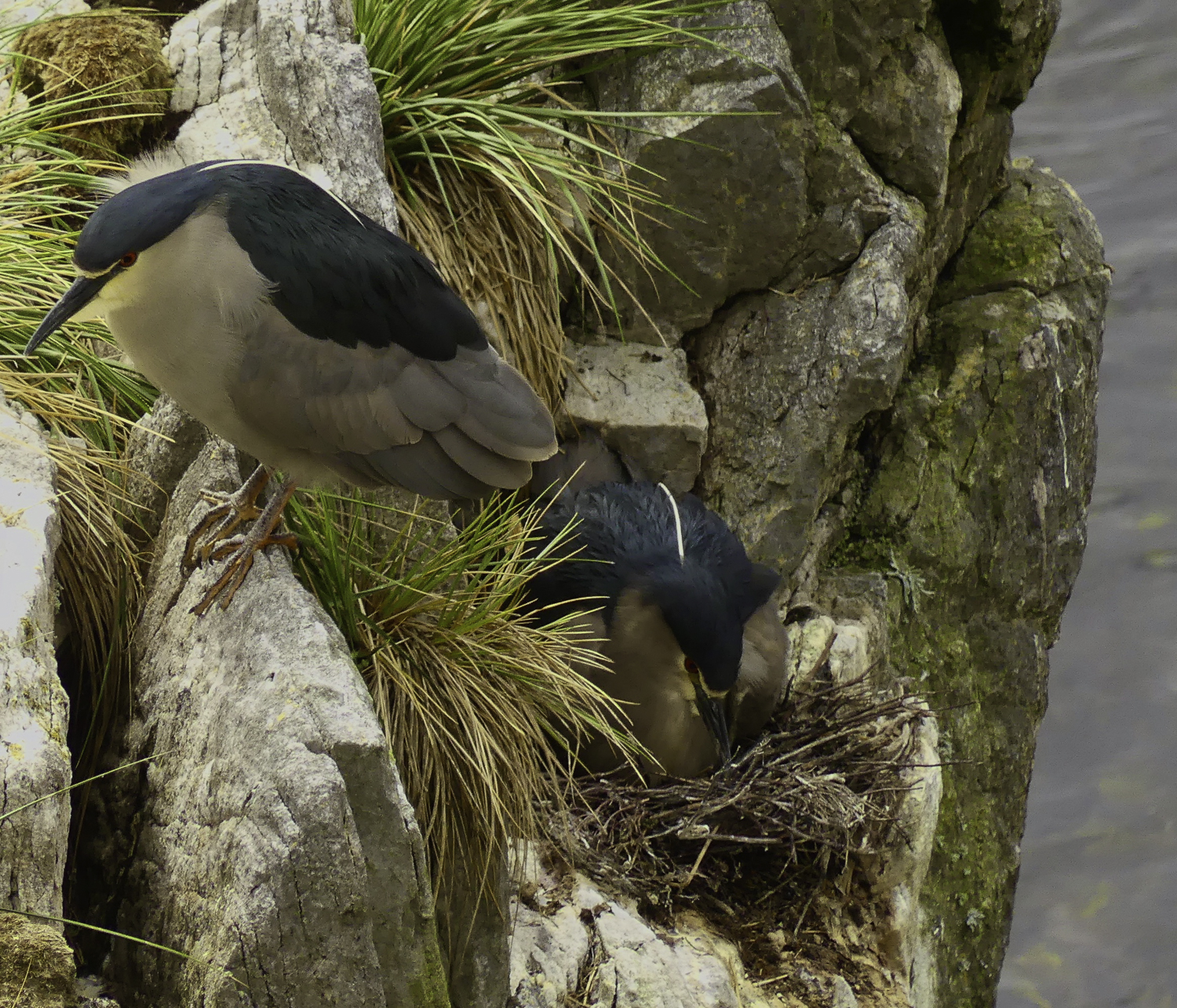 My first memory of watching the ghostly silhouette of a black-crowned night heron flying across the night sky goes back to my childhood and a ‘hornpoutin’ fishing trip with Grampa Roy. In the New Hampshire vernacular, “hornpout” referred to the native brown bullhead, a delicious fish to eat but a challenge to take off the hook because you had to avoid its three venomous spines. Sitting in the canoe under the stars, Grampa told me all about herons. We heard several splashes along the distant shore of the pond and he guessed the night heron was probably catching baby hornpout. With enough adult hornpout in our creel, we simply sat and watched the night heron fishing in the moonlight.

Now, perched on a cliff above two rookeries, I’m in the perfect spot to observe an active nesting colony of Falkland black-crowned night herons (Nycticorax nycticorax falklandicus) and a small colony of nest-building rock cormorants (photos #1 and #2). Nycticorax means “night raven” and derives from the Ancient Greek nuktos “night” and korax, “raven,” both words referring to the heron’s largely nocturnal habits and their croaking call. In the Falklands, the nickname for the night heron is “quark.” The Falkland night heron is restricted to the archipelago and does not migrate, and is one of the 5 subspecies of black-crowned night heron in the world. The other subspecies are found on all continents except Australia and Antarctica. You have probably seen the night heron subspecies N. n. hoactli, which breeds in North and South America, from Canada as far south as northern Argentina and Chile.

Night herons are easy to distinguish from other heron species because of their body shape and posture when resting or roosting, with their head tucked down and in perfect alignment with their body. When hunting, night herons do extend their relatively short necks and look more like other wading birds. Adults of both sexes (photo #1) are an overall pale grayish-buff with a blackish cap and back. Note the elegant white head plume and those striking red eyes. The plumage of juvenile night herons is brown and streaky, which provides good camouflage (photo #3, fledged juvenile resting on one leg). As is true for all heron species, they breed and forage in marine and freshwater habitats. Falkland night herons nest in relatively small colonies, constructing a platform-like nest from sticks, grasses and seaweed. Breeding colonies are typically situated in protected locations that limit access by potential predators, such as on seaside cliffs or offshore islets.

The eyes of night herons are large and more widely separated than those of day-active herons, which reflects their need for enhanced visual ability over a range of light levels. Although mostly nocturnal, these herons locate prey by sight and by sound, but also hunt by day to meet breeding season energy demands. Their diet consists of small fish, marine invertebrates, aquatic insects, and they are opportunistic predators of small birds and will take eggs and nestlings of other waterbirds. It’s a common sight to see them standing stock-still along the water’s edge or in the shallows, waiting for their prey to come within range. Surprisingly, these herons are good swimmers and are able to land feet first on the water, or even plunge-dive. They grasp their prey in their bill (instead of stabbing it) and then shake the prey until it’s been stunned or killed, swallowing it head-first. Black-crowned night herons are among the seven heron species known to engage in “bait fishing,” which involves luring or distracting fish by tossing edible or inedible buoyant objects into water within their striking range – a rare example of tool use among birds. They also use another fish-luring technique called “bill-vibrating,” in which the heron submerges its bill, and then opens and closes it rapidly in the water to create a disturbance that attracts fish.

Night herons reach sexual maturity mature at around 3 years of age, and at the time of pair formation adults of both sexes grow two or three long white plumes, their legs turn pink, and the back and head plumage takes on a glossy bluish-green sheen. My assumption is that the pair in photo #4 might be approaching their first breeding season and are engaging in a “greeting” behavior or some preliminary billing and preening. The male typically makes a hissing sound to attract females, and will also bow dramatically and erect the long white plumes on his head. The male starts building the nest, and once he’s found a mate, will continue bringing materials while the female takes over the actual construction duties. As you can see in photos #1, #2 and #5, the colony I observed was on the sheer cliff of an islet. There is certainly no margin of error for a wandering chick!

A significant effort by both parents is required to adequately feed the young, and continued courtship behavior sustains the pair bond throughout the breeding season. Of the two nests that I photographed (photo #5), one parent (upper left ledge) was incubating two eggs and the other parent (lower ledge) had two chicks she was keeping warm in the nest. If you look closely, you’ll see a tiny brown head sticking out from beneath her. The parent at the upper nest caught my attention as she rose and began turning her blue-green eggs with her beak (photo #6). After a bit of stretching and feather ruffling she settled back down to incubate, carefully positioning her brood patch (highly vascularized bare skin) directly over the eggs to keep them warm. At the nest with the two chicks (photo #7), which cantilevered out over the water in a precarious manner, I watched in amazement as a blur of tiny wings forced the parent to rise, allowing one downy chick to back out to very edge of the nest, flutter its wings for balance (I held my breath!), and then empty its cloaca in a steady brown stream onto the rocks below. Not one drop in the nest! The chick wobbled back under its parent and the second chick backed out and repeated the process. I observed the activities at these two nests for about a hour, which re-defined “living on the edge” and gave me a much better understanding of heron family logistics! 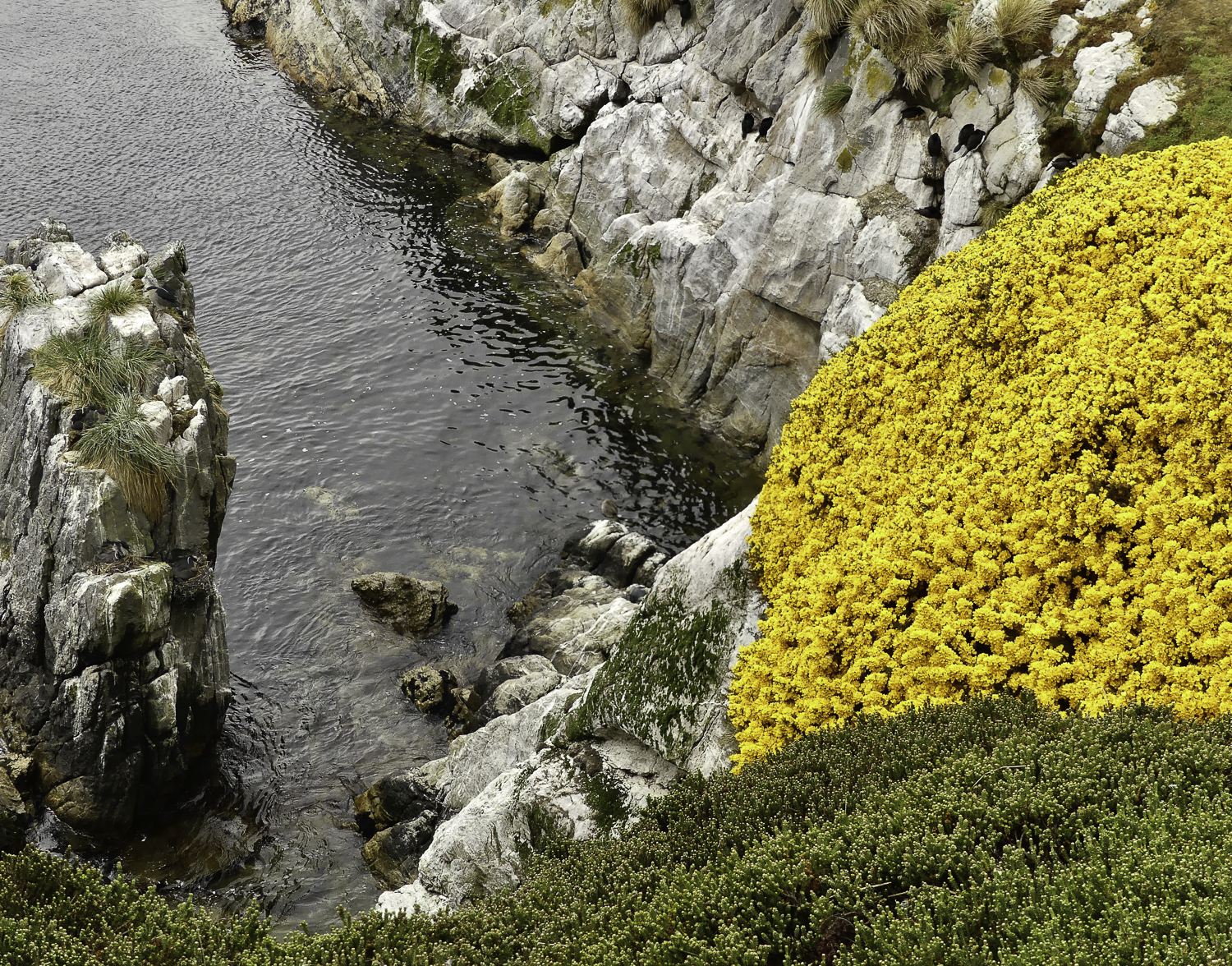 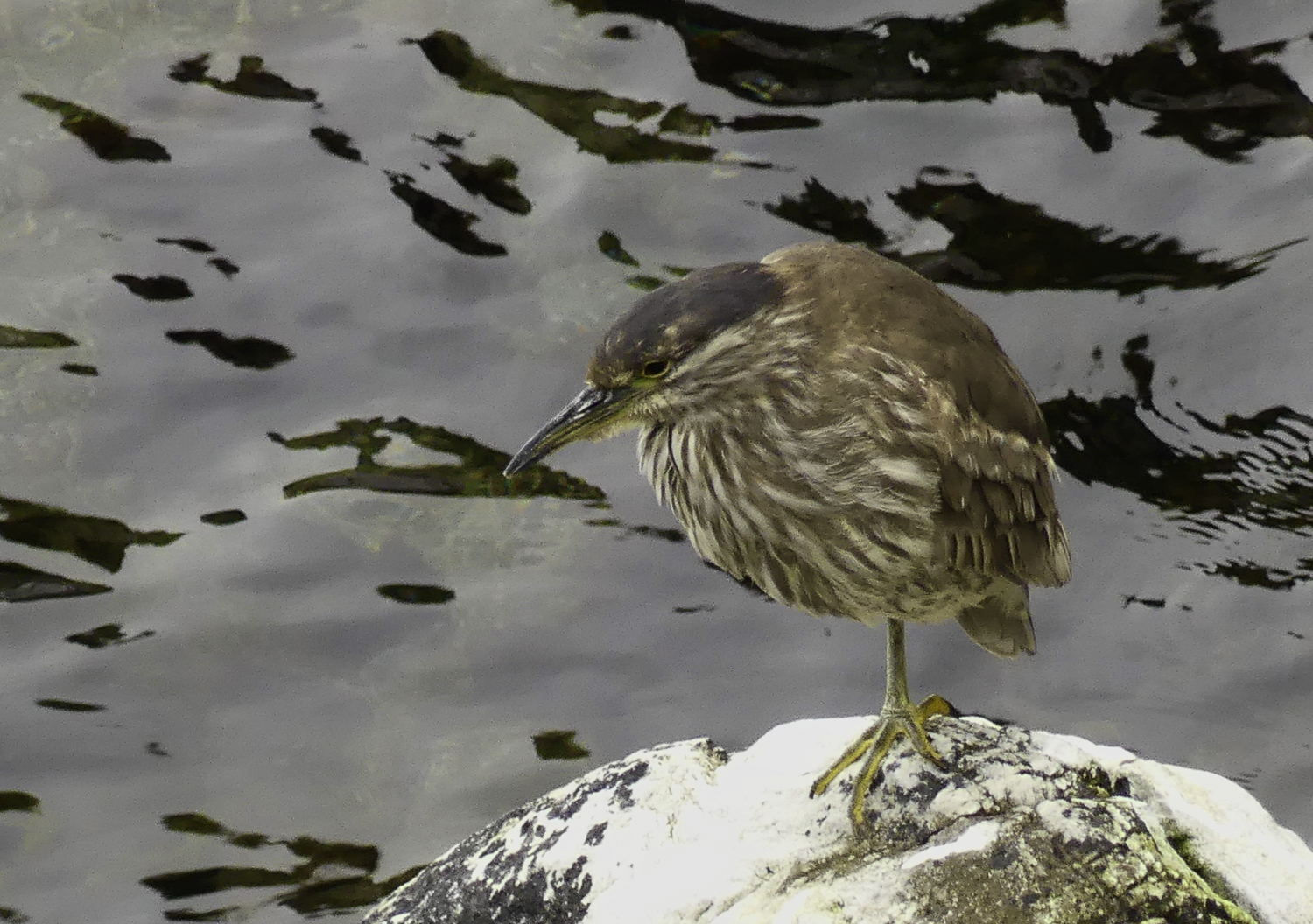 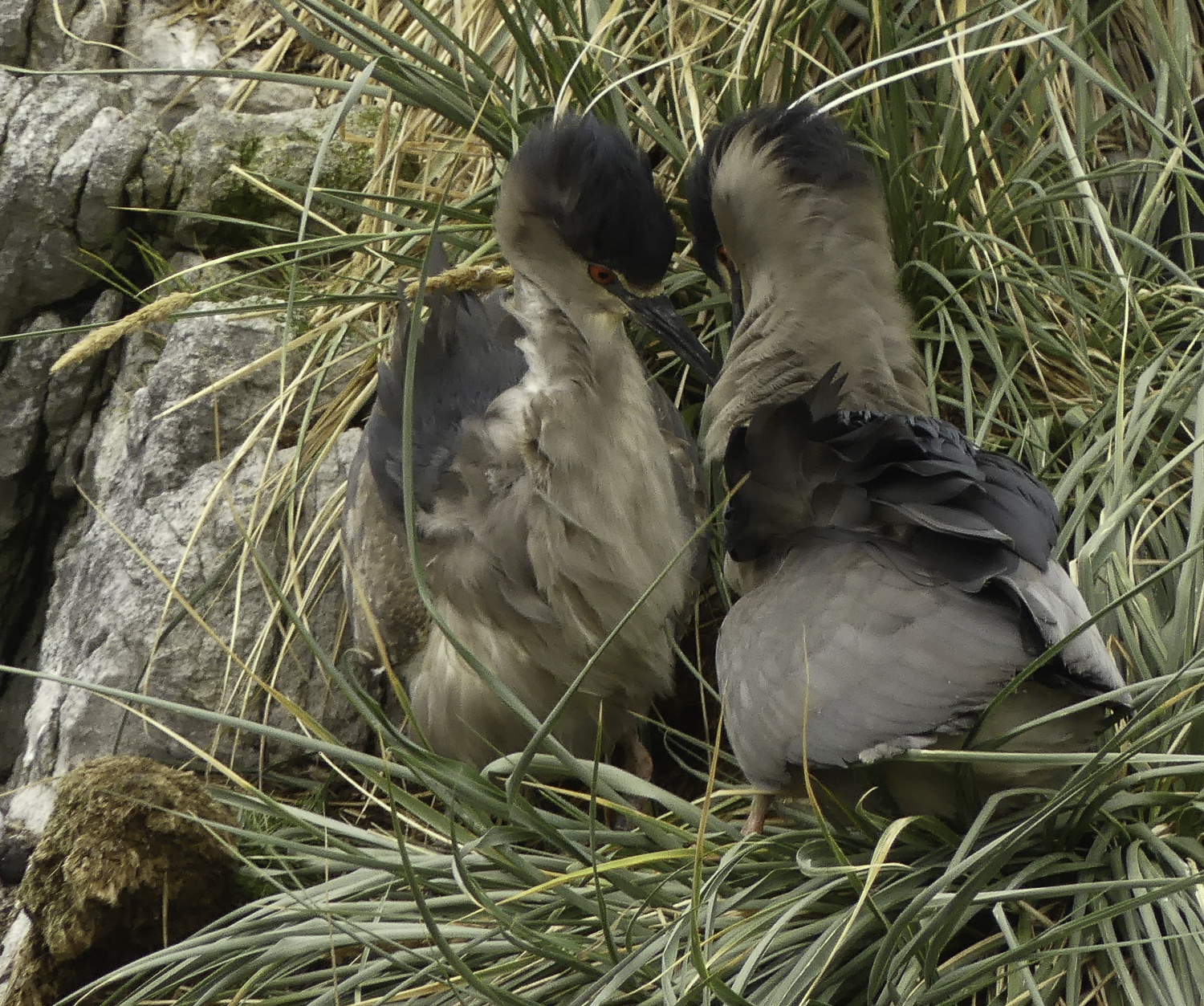 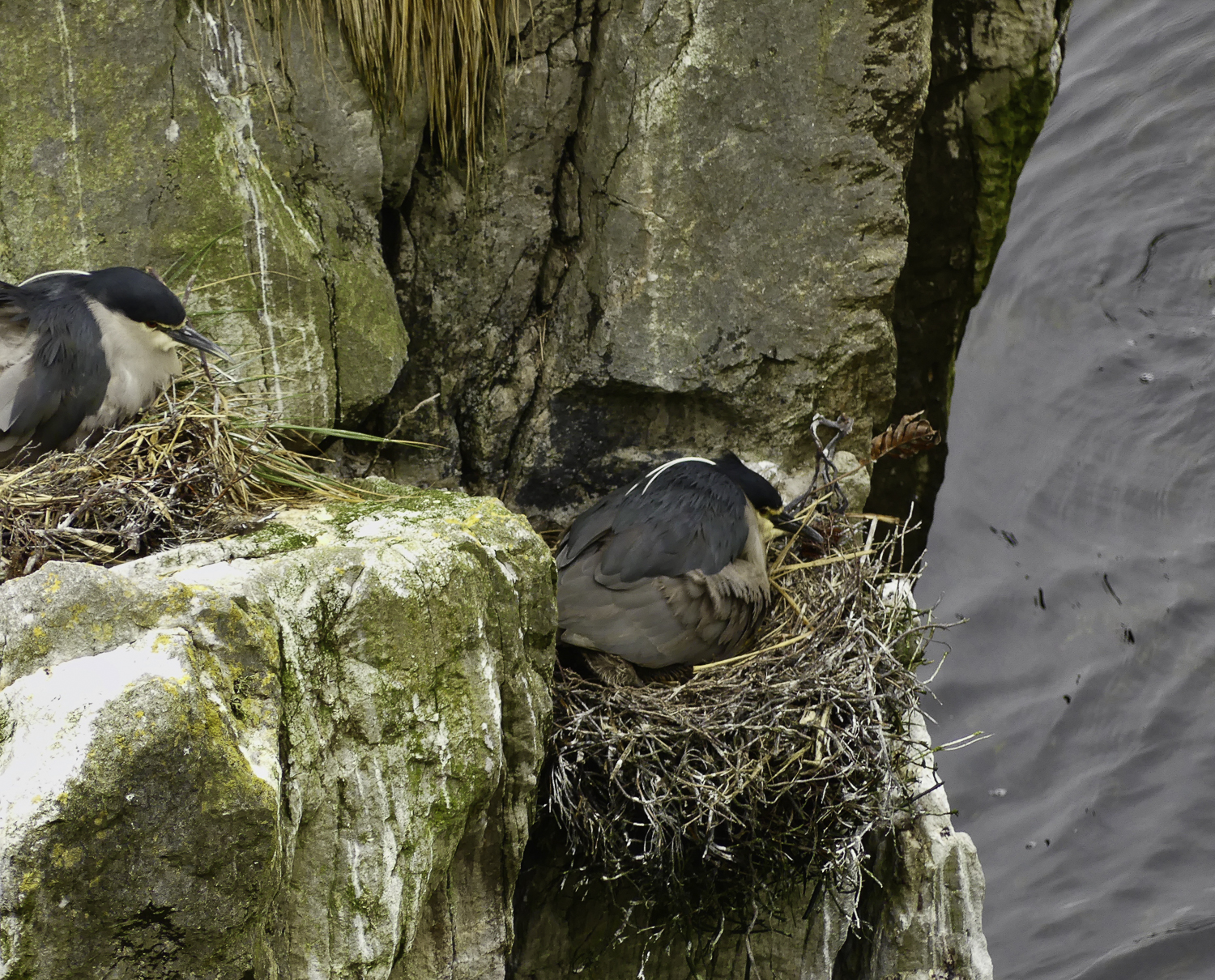 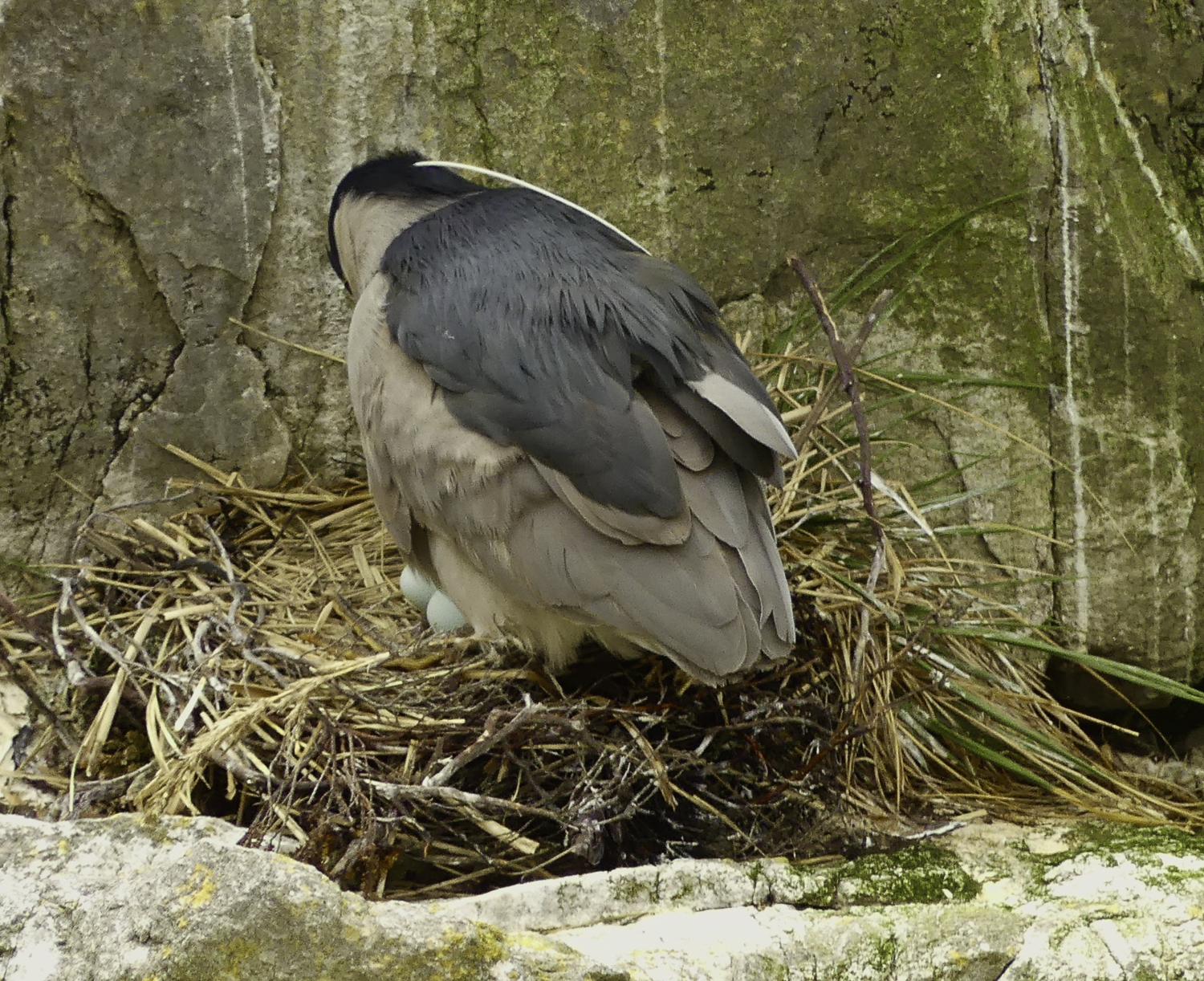 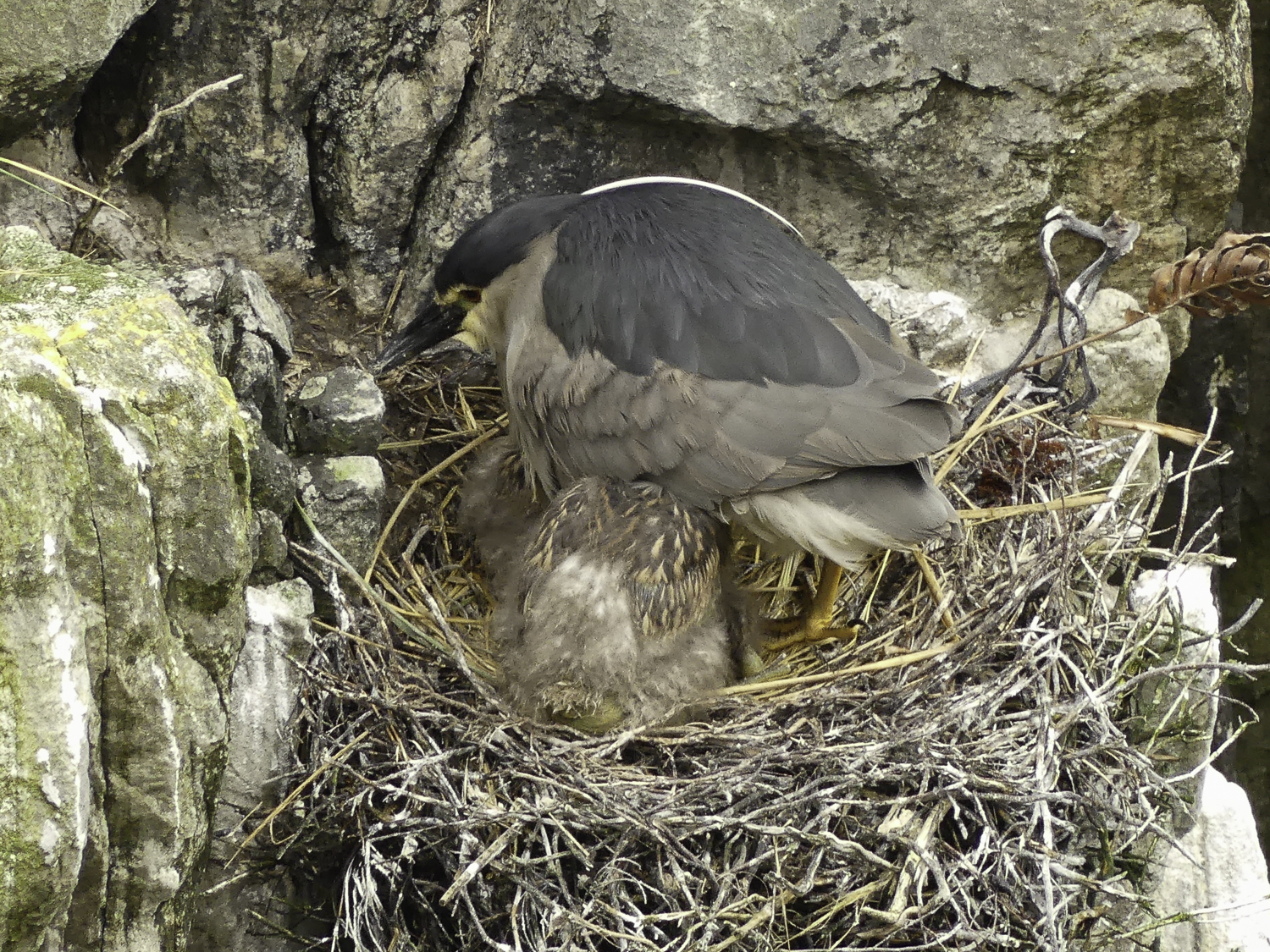