ePostcard #84: Mystery of the Curious Wolf 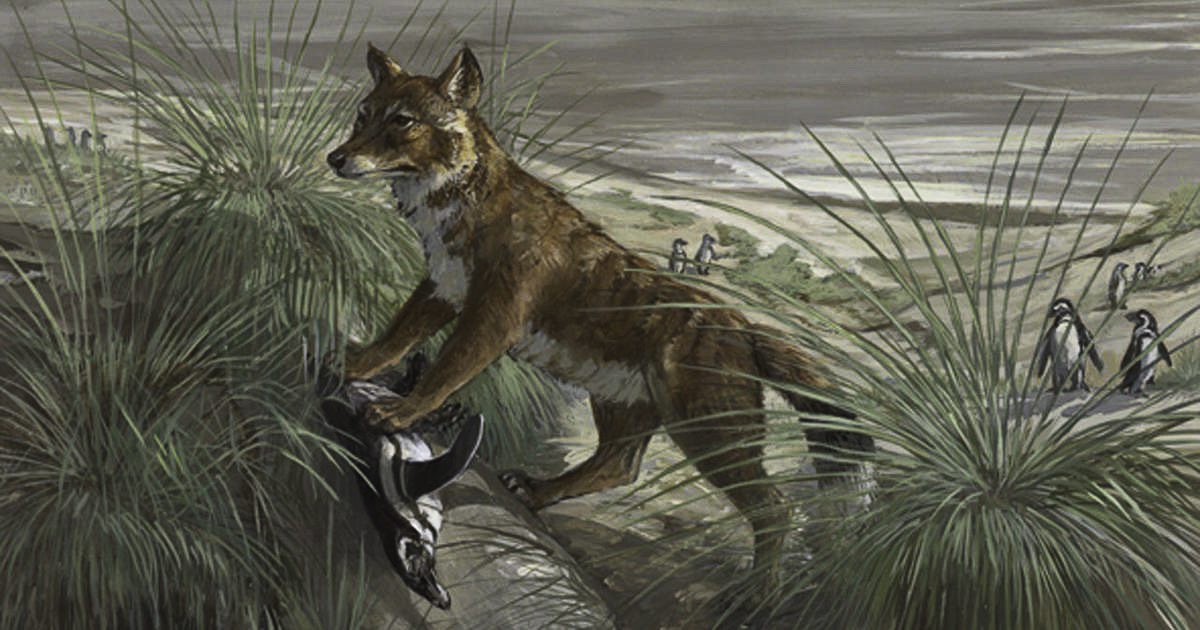 ePostcard #84: Mystery of the Curious Wolf

Charles Darwin regarded the Falkland Island wolf as a compelling biological mystery to be solved, and his observations would set the stage for what would become one of the most amazing natural history stories of all time—one that would take evolutionary biologists and paleontologists more than 300 years to solve. The great naturalist was not the first to marvel at the fearless, Labrador retriever-sized canid. Captain John Strong, a British mariner, made the first recorded landing at what we now call the Falkland Archipelago (Islas Malvinas) in 1690. He named the sound between the two main islands after Viscount Falkland, a British naval official, and the British eventually gave that name to the entire archipelago. Strong and his men reported seeing several “wolf-foxes” roaming wild on the two main islands, with some so curious that they swam out to “meet” the approaching row boats. Fascinated by these handsome animals, the men managed to capture one to take back with them to Europe. In mid-ocean, the captive became so frightened by the firing of the ship’s cannon that it jumped overboard.

With the eventual arrival of settlers in the Falklands during the 18th and 19th centuries, the strange wolf-fox acquired the name warrah, because of its similarity to the maned wolf (Aguará guazú; photo #4). The name “warrah” was an anglicized corruption of the word aguará (meaning “fox” in Guaraní, an indigenous language of southern South America). Unfortunately, the warrah’s fearlessness also made it extremely easy to kill. Visiting sailors off the ships hunted them for their valuable fur and the settlers, regarding the warrah as a potential threat to their sheep, lured them to their deaths with poisoned meat.

Charles Darwin saw his first warrah from the deck of the HMS Beagle in 1833. As he wrote in his journal, “The only quadruped native to the island, is a large wolf-like fox, which is common to both East and West Falkland. Have no doubt it is a peculiar species, and confined to this archipelago; because many sealers, Gauchos, and Indians, who have visited these islands, all maintain that no such animal is found in any part of South America.” Both Darwin and FitzRoy, the captain of the HMS Beagle, noted that the Falkland wolf-fox was strikingly different from the native canids they had seen on the South American mainland. Darwin initially gave the strange canid the scientific name Canis antarcticus. For Darwin, the absence of any other terrestrial mammals on the islands only deepened the sense of mystery surrounding the existence of the Falkland wolf, and he posed the following questions for later consideration: What was the likely ancestor of the wolf-fox? How (and why) would such a a large predator make the journey from South America to these islands, and why was it the only land mammal to have done so?

Darwin noted that the Falkland wolf, or warrah — like his now-famous Galápagos finches — varied widely in size and possibly color between East Falkland and West Falkland, providing one more example to his growing list that the traits of species were not immutable. Darwin interviewed a Mr. Lowe, “an intelligent person who has long been acquainted with these islands, assured me, that all the wolf-foxes from West Island were smaller and of a redder color than those from East Island.” After writing about the variety of animals in the Galapagos Islands, Darwin noted: “The only fact of a similar kind of which I am aware is the constant asserted difference between the wolf-like fox of East & West Falkland. If there is the slightest foundation for these remarks the zoology of Archipelagos will be well worth examining; for such facts would undermine the stability of Species.” Unfortunately, the Falkland Island wolf populations were already in steep decline by the time Darwin arrived in archipelago, with the last one shot in 1876. Darwin’s visit, in the species’ final decades, remains one of the only scientific observations of this species ever made. The modern scientific name given to the extinct Falkland Island wolf, Dusicyon australis, which means “foolish dog of the south,” seems a fitting epitaph for an endemic species whose extinction was caused by its lack of fear of people.

So where did the Falkland Island wolf come from? The research that has gone into tracing the evolutionary ancestry of these enigmatic predators, which has been an ongoing natural history mystery for more than 320 years, is a tribute to the extraordinary adaptability and tenacity of canids. Evolutionary biologists have debated whether the so-called wolves were actually foxes (which is what Darwin called them) or, like the Australian dingo, descended from dogs that indigenous peoples somehow brought to the remote archipelago thousands of years ago. During the Pleistocene (2.6 million to 12,000 years ago), we know that South America supported a diverse canid fauna. The first research effort to determine the wolf’s ancestral lineage used ancient DNA from museum specimens and suggested that the Falkland wolf diverged from its closest living relative, the South American maned wolf (Chrysocyon brachyurus) around 7 million years ago, and probably colonized the Falkland Archipelago around 330,000 years ago by unknown means. As you can see in photos #2 and #4, the differences between the two canids are striking. The maned wolf has much longer legs and long jaws that are best suited to catching rats and mice. The Falkland wolf has shorter legs and Labrador retriever-like jaws (photo#3) designed for grabbing and shaking large prey, such as seals and penguins.

In 2013, Alan Cooper and his colleagues from the Australian Centre for Ancient DNA, School of Earth and Environmental Sciences at the University of Adelaide, finally solved the mystery. These researchers also analyzed ancient mitochondrial DNA, but this time the search would be focused on finding the Falkland wolf’s direct mainland ancestor and establishing the Pleistocene geo-environmental conditions that would have permitted colonization of the remote archipelago by a land-based predator. I recommend that you simply glance through the scientific article (the reference link is provided below) that describes the complexity and multidisciplinary approach they used to solve Darwin’s mystery. By looking through the South American fossil record, the scientists were able to identify and retrieve ancient DNA from the Falkland wolf’s closest relative, an extinct fox known as Dusicyon avus, which was once found as far south as Patagonia and went extinct on the mainland 6,000 to 8,000 years ago.

Ancient mitochondrial DNA was obtained from six specimens of D. avus collected from sites in Argentina and Chile, which ranged in age from 7,800–3,000 yr BP. The researchers then compared those analyses with DNA from tiny pieces of tissue from a warrah skull that Darwin himself collected that they found stored in the attic of the Otago Museum in New Zealand. Further DNA analysis of the extinct fox (D. avus) indicated that it split from its mainland ancestors about 16,000 years ago – during the last ice age. At that point, when sea levels were much lower, Patagonia was only separated from the Falklands by a small passage of shallow sea, which would have been frozen over at times. In the 2013 study, the greatly improved “resolution” provided by using DNA data from the closest mainland relative (D. avus) allowed the researchers to conclude that the ancestor of the Falkland Island wolf likely colonized the islands by traveling over ice across a narrow strait during the Last Glacial Maximum in Patagonia, before evolving in complete isolation into the wolf-fox known as the warrah—not 330,000 years ago as estimated in the 2009 study.

Look at the map (from the 2013 article) in illustration #6 to get a better idea of the geologic setting during the late Glacial Maximum. Quoting from an interview with study leader Professor Alan Cooper; “The Eureka moment was finding evidence of submarine terraces off the coast of Argentina. They recorded the dramatically lowered sea levels during the Last Glacial Maximum (around 25-18,000 years ago). At that time, there was a shallow and narrow (around 20km) strait between the islands and the mainland, allowing the Falkland Islands wolf to cross when the sea was frozen over, probably while pursuing marine prey like seals or penguins. Other small mammals like rats weren’t able to cross the ice.”

Let your mind walk back in time and imagine individuals or packs of the ancestor of the Falkland wolf hunting seals, penguins seabirds along the margins of the ice—the ideal colonizers to find their way to the remote islands. I think that Darwin would have enjoyed every step that went into solving his mystery of the curious wolf of the Falklands!

Special note: For readers interested in the extraordinarily complex analysis and research used to discover the ancestry and probable colonization history of the Falklands Islands wolf, I recommend and have provided my primary reference below. If you do nothing more than scan the article to capture a sense of all the lines of evidence from multiple scientific disciplines used by the researchers to find answers to this fascinating mystery you will be amazed.

#2: Historic engraving by George Waterhouse from Zoology of the Voyage of H.M.S. Beagle). This curious and unusual canid, to which Darwin assigned the Latin name Canis antarcticus. Its modern scientific name, Dusicyon australis, means “foolish dog of the south,” because of its lack of fear of people. The Falkland Islands wolf and its fossil ancestor Dusicyon avus show a more carnivorous feeding morphology than other South American foxes, and they cluster morphologically with jackals.

#3: Historic drawing of the skull of the Falkland Island wolf also known as the warrah)

#5: Maned Wolf (Photo Credit: Ronda Gregorio/Smithsonian National Zoo). The maned wolf is the largest canid of South America. It looks more like a long-legged fox than a wolf. Genetic studies show that it is neither fox nor true wolf, but a distinct species. It is the only member of its genus, Chrysocyon. Maned wolves range through central and eastern South America including northern Argentina, South and Central Brazil, Paraguay, Bolivia and southern Peru. They inhabit the cerrado, the largest biome of South America, which is comprised of wet and dry forests, grasslands, savannas, marshes and wetlands.

#6: Map of submarine terraces between mainland South America and the Falklands/Malvinas. Four submarine terraces (levels I–IV) are shown along the continental shelf (light blue) between the South American continent and the Falkland Islands. During the Late Glacial Maximim (shown in gray as IV), the Falklands would have been separated from the mainland by a shallow marine strait estimated to be as little as 20 km wide and only 10–30 m deep. It is likely to periodically have been covered by ice, or facilitated ice rafting, during peak glacial conditions. 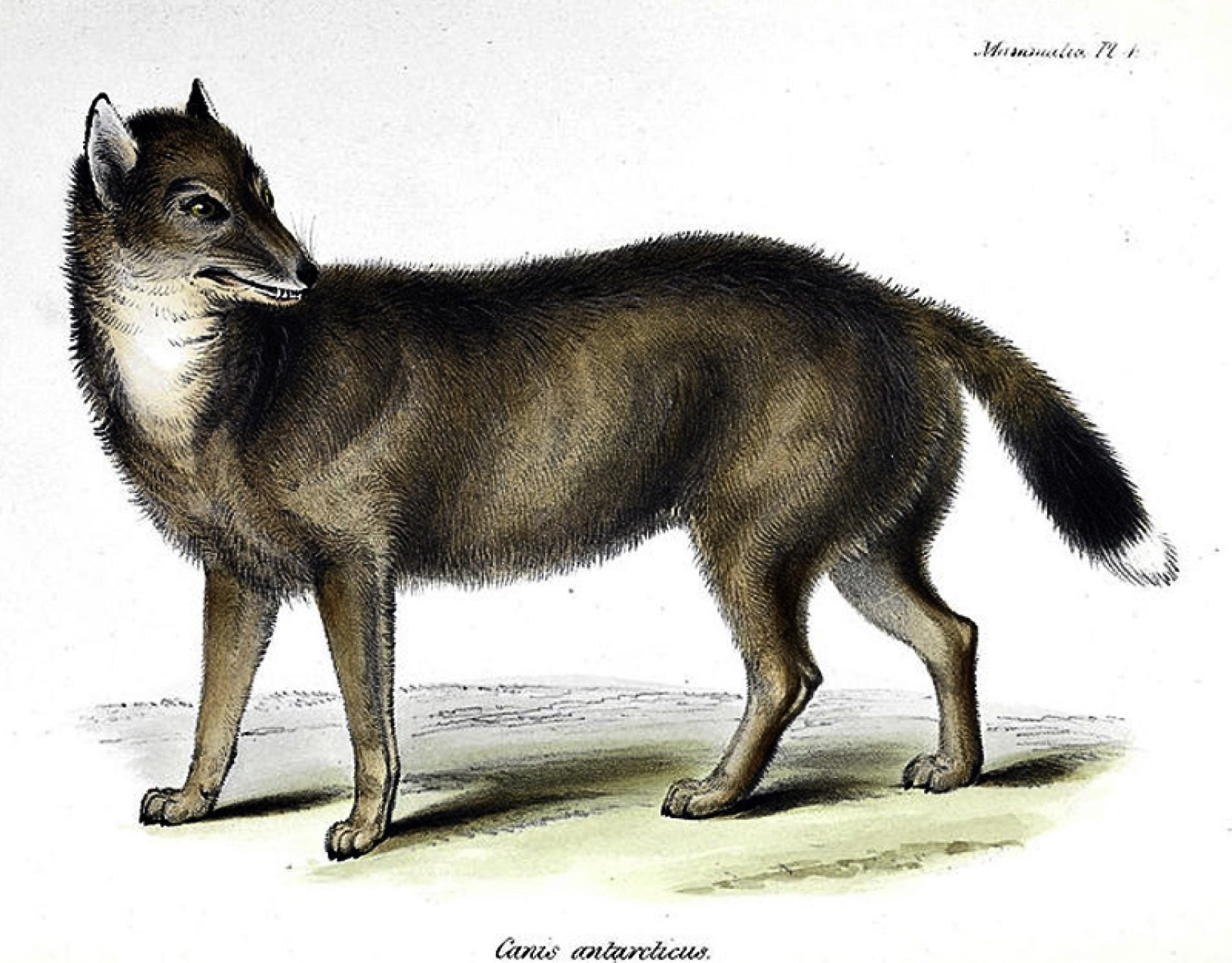 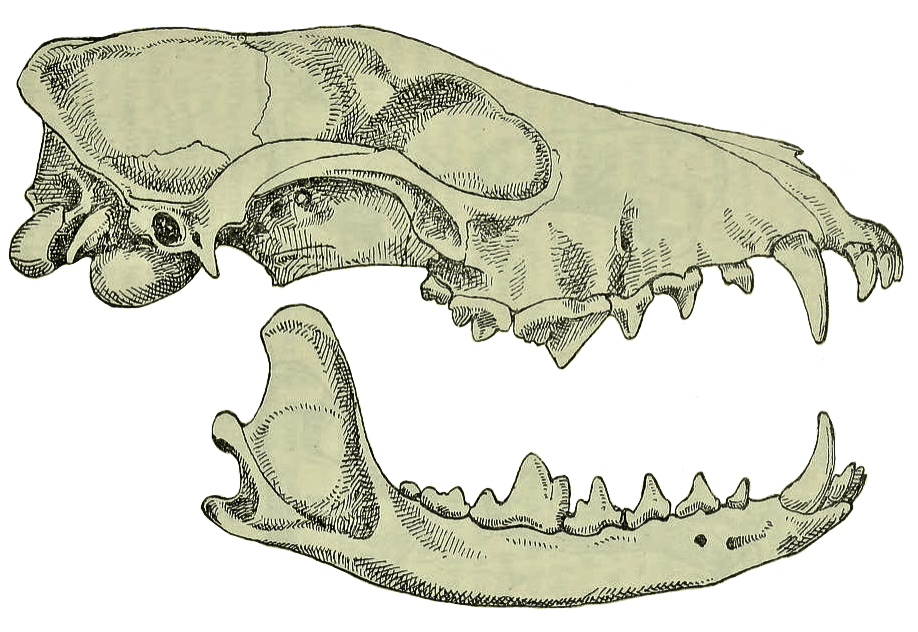 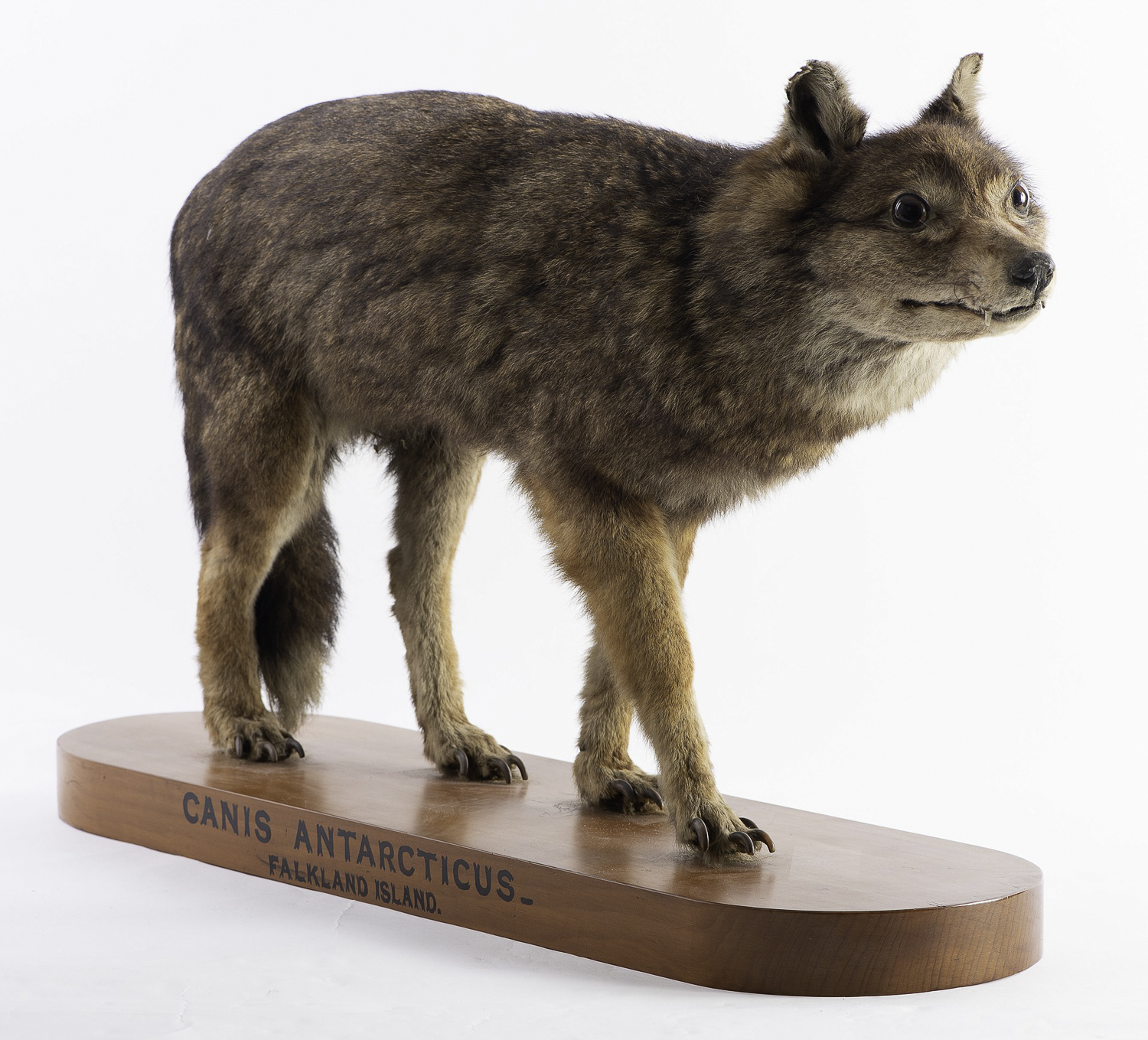 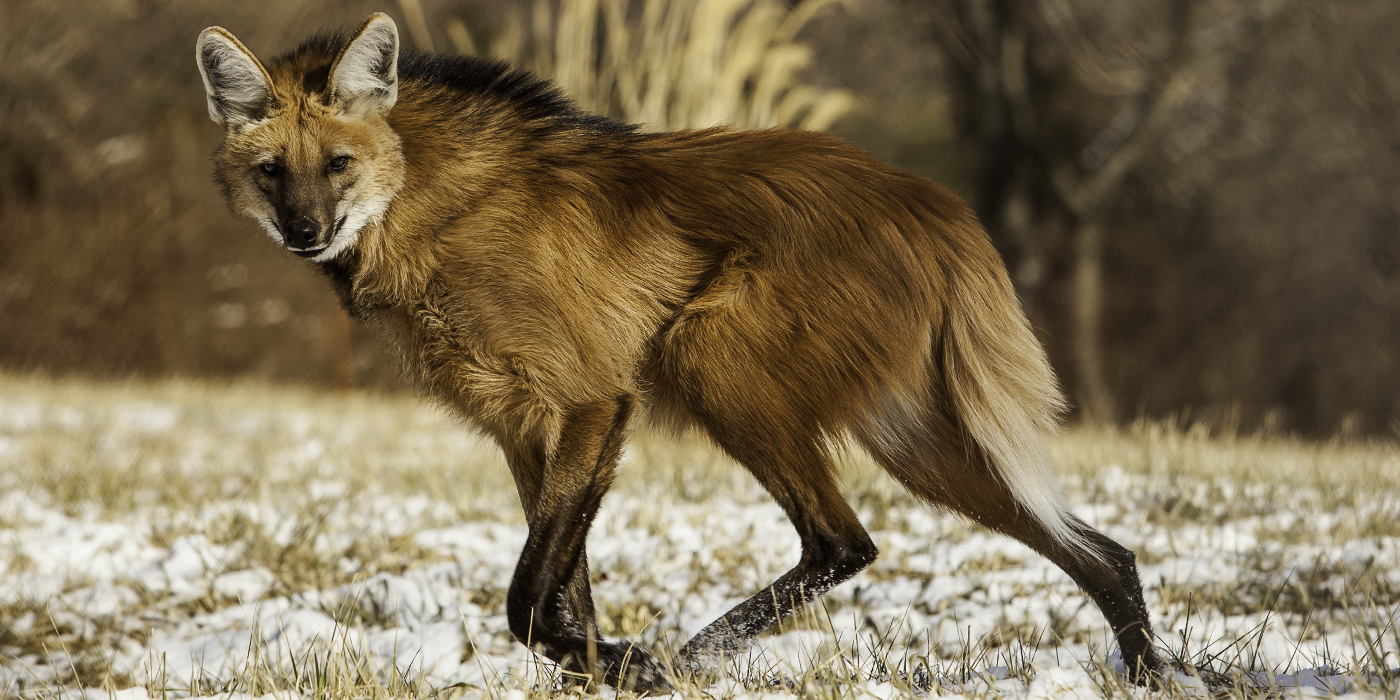 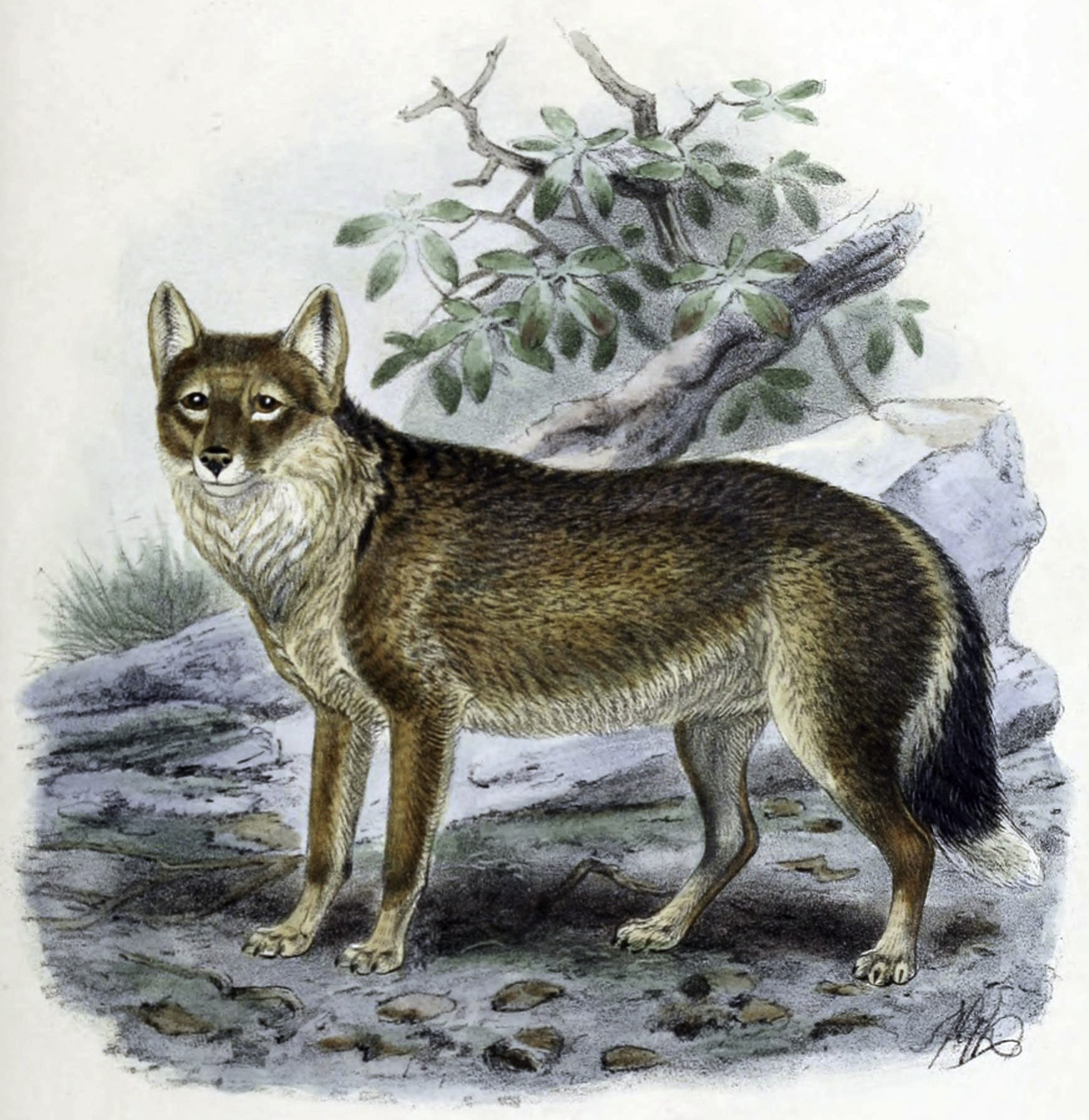 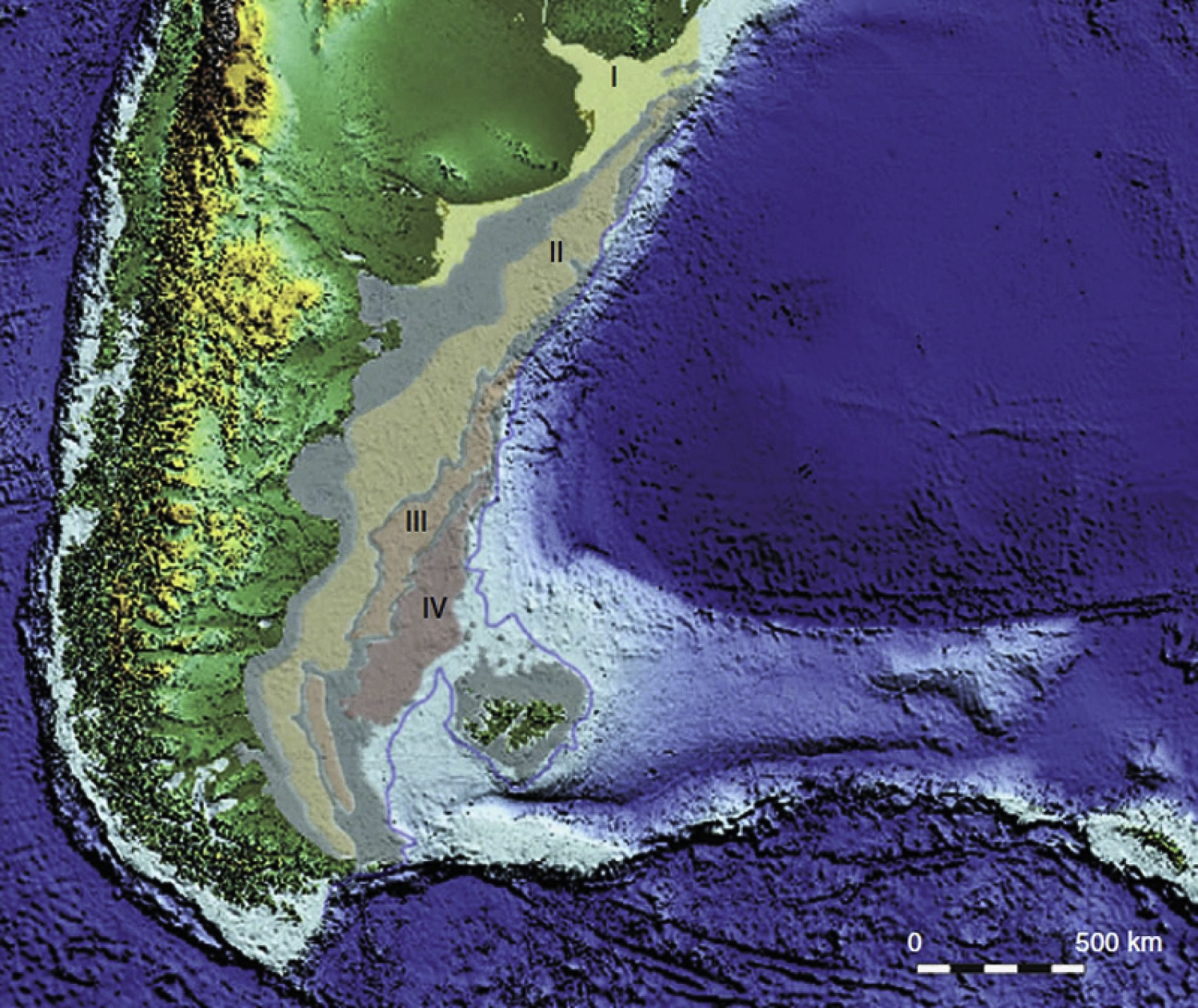