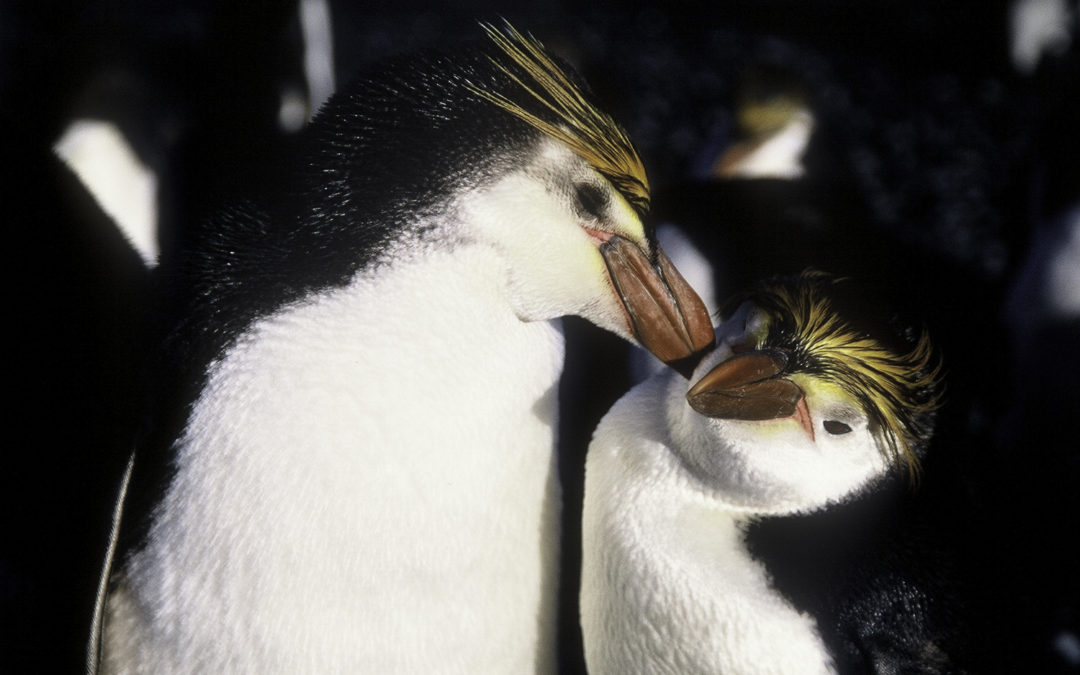 Crested penguins, every species, just make you smile—you can’t help yourself! The large and fascinating genus Eudyptes includes both crested and rock hopper penguins. The first two of my photos are of royal (crested) penguins on Australia’s Macquarie Island, where we were blasted by Southern Hemisphere sunshine on one lucky day and hammered with a fierce and icy rainstorm the next.

Royal penguins, which breed only on Macquarie Island and adjacent Bishop and Clerk Islands, are distinguished from their macaroni penguin relatives by their white (as opposed to black) faces. Royals form large colonies on Macquarie Island, nesting in the grasslands close to shore but also traveling considerable distances to reach plateau uplands located several hundred feet above sea level. On Macquarie, royal penguin breeding colonies are clustered in an area smaller than 38 square miles, with a 2016 population estimate of around 750,000 breeding pairs. Royal penguins are listed as “Vulnerable” on the IUCN Red List based on their extremely restricted breeding range, historic breeding habitat degradation, and consistently variable annual population estimates. For several decades during the 19th century, royal penguins were massively exploited for their rich oil, once considered a valuable industrial product. By the early 20th century, the Australian government instituted strict laws for penguin protection. On Macquarie Island, however, the accidental and intentional introduction of rats, mice, rabbits (overgrazing seabird nesting habitat), and cats (brought in to control rodents) have all taken a huge toll on nesting seabird species, and especially penguins. Aggressive eradication programs supported by the Australian government and conservation groups have been very successful in removing feral cats and efforts to remove rabbits and rodents are ongoing and seem to be increasingly effective.

Thinking about what most penguin species eat (krill and tiny fish), took me down an interesting path. As expected, both royal and macaroni penguins forage principally on krill (tiny euphausiid crustaceans) and on myctophid fish (a group of fish species commonly referred to as lanternfish or lampfish). Lanternfish rank among the most abundant groups of fish in the ocean. Royal penguins rely more heavily on myctophid fish than on krill. Royals catch their prey by pursuit-diving, normally at depths of up to 295 feet, with dives rarely exceeding 2 minutes. Some night foraging occurs, but that is typically at much shallower depths.

Seabird by-catch and food abundance issues associated with Antarctic-based commercial krill harvesting and other fisheries are a continuing problem in the Southern Ocean, and researchers believe that these issues must be addressed with an evolving set of regulations that take into consideration the tonnage of krill and small fish harvested annually and the spatial and temporal overlap between these commercial activities and penguin foraging patterns, especially during the breeding season.

Snares Crested Penguin: The final photograph is of a group of Snares crested penguin, which the IUNC lists as “At Risk.”. The Snares penguin is an indigenous taonga species, one that is of significant cultural and spiritual value to New Zealand Maori. Landing at The Snares is prohibited unless you are doing permitted research, which is an excellent regulation intended to protect the islands’ wildlife and vegetation. The Snares crested penguins were a challenge to photograph from a bobbing Zodiac, so I did what I always try to force myself to do—I put down the camera and simply observed. The group in my photograph had just come in from a fishing expedition and their crests were wet and slicked back. This group eventually moved upslope through the rocks and gathered beneath a cluster of Olearia trees (tree daisies) and a few climbed up to perch on bent-over branches. Breeding only at The Snares, the crested penguins have established about a 100 colonies on the larger islands of the Snares group. The accumulation of the penguin’s guano often kills the surrounding vegetation, which recovers when the penguins move to a new roost and breeding site.

Fish Class 101: Trying to learn more about “myctophids” (collectively referred to as lanternfish) encouraged me to dig a little deeper into the literature. The Myctophids are a large group of fish (267 species worldwide to be exact) that may be the most abundant and widespread fish group in the world’s oceans. Did you know that most myctophids, which average less than 6 inches in length, are bioluminescent (glow in the dark)? When eluding predators in the sun-deprived depths of the ocean, the concentration of light-producing photophores on the fish’s flanks “flash,” producing a distracting burst of light (an evasive strategy termed counter-illumination) that allows the lanternfish an escape window. Lanternfish are able to regulate the brightness of the bluish light emitted by their photophores to match the ambient light level above, effectively masking (camouflaging) their silhouette when viewed from below. During the day, lanternfish remain in a sun-deprived zone roughly 1,000 to 4,000 feet below the sea surface. At night, however, they migrate up to a zone within 30 feet of the surface. Lanternfish probably do this to avoid predation, and because they are tracking the daily vertical migrations of their prey, zooplankton. The lanternfish eat zooplankton, and in turn provide a rich source of food for countless animals, including much bigger fish, marine mammals and diving seabirds like penguins. 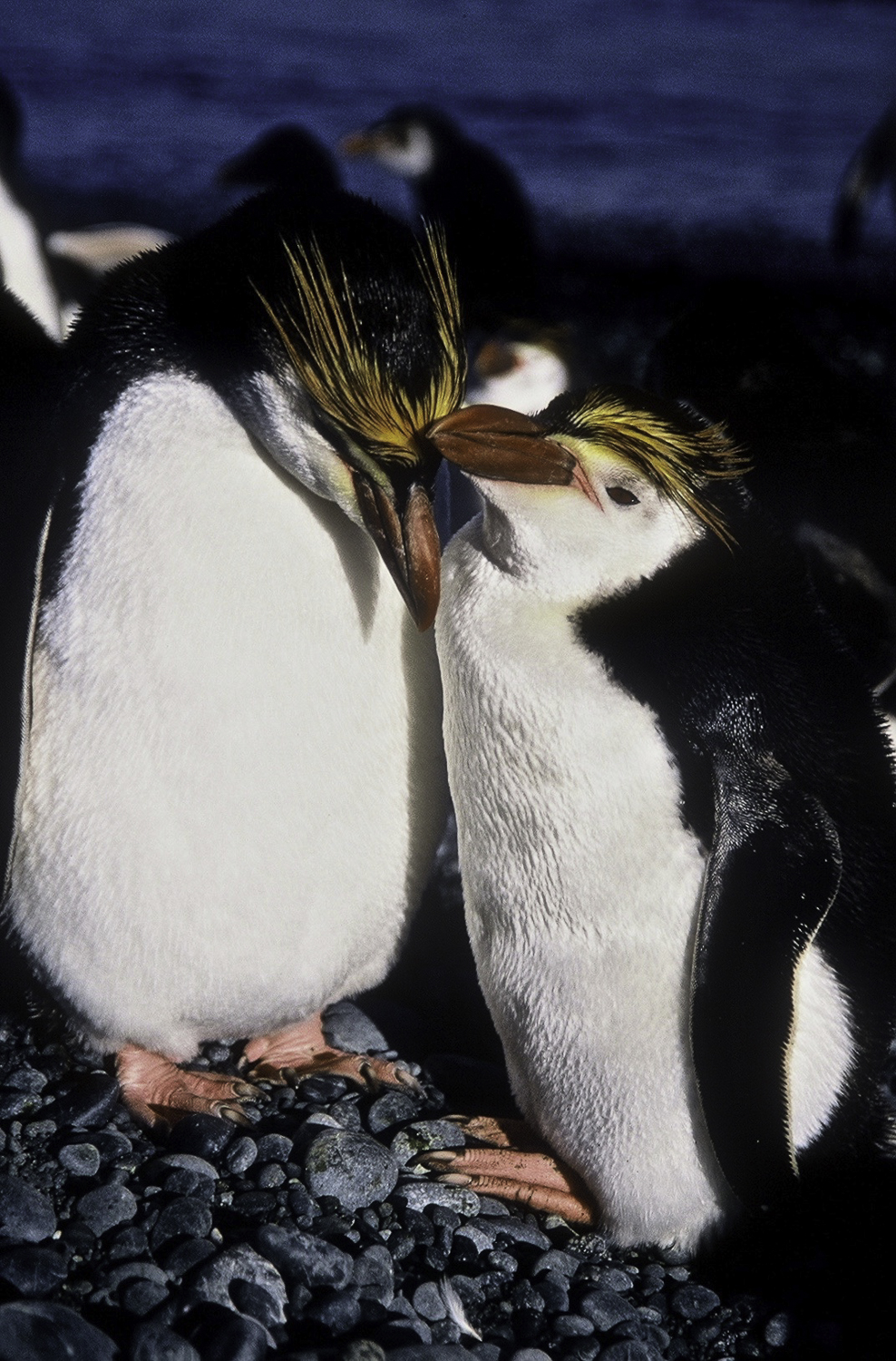 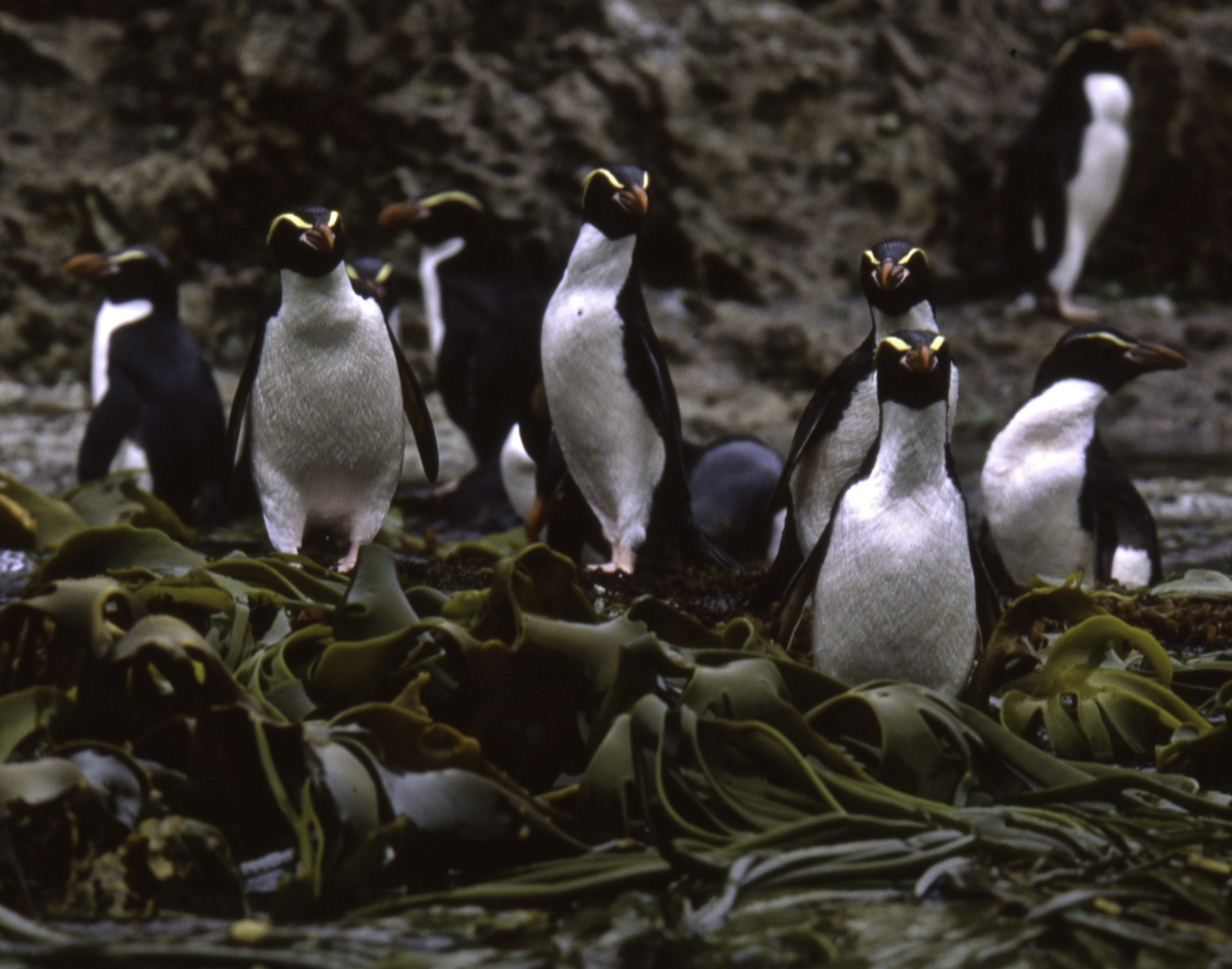