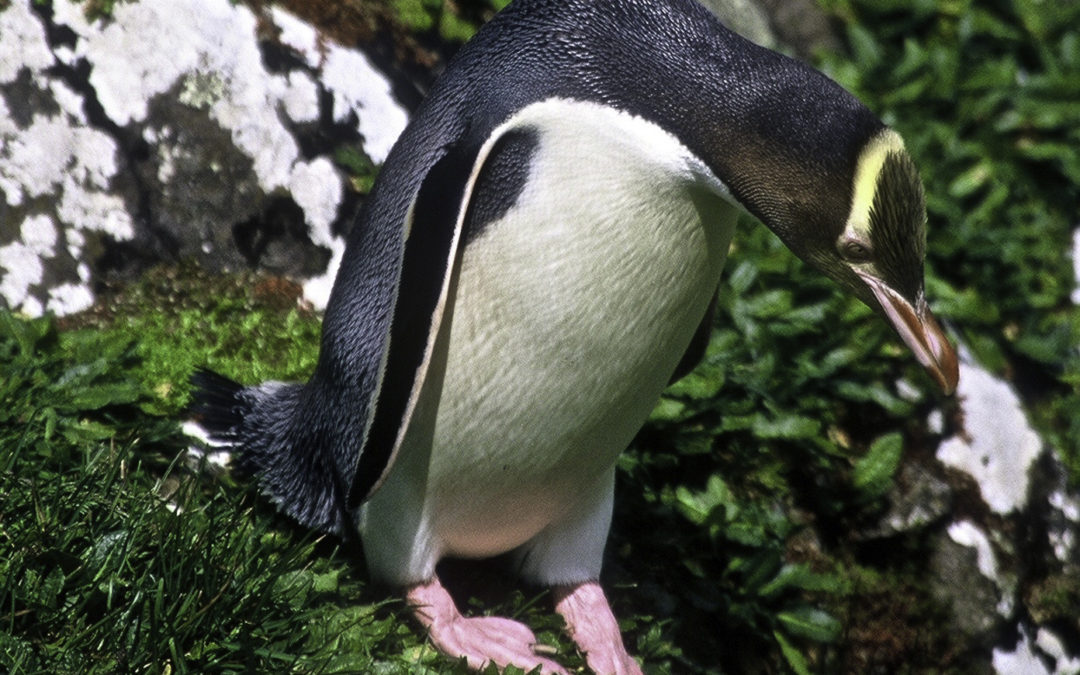 The yellow-eyed penguin is a New Zealand endemic and one of the rarest and most endangered species of penguin in the world. The Maori name for the yellow-eyed penguin is “hoiho,” which means “noise-maker.” This makes me smile, because in my limited experience with these shy penguins they were mostly silent. They breed only on the southeast coast of New Zealand’s South Island (mainland), on Stewart Island and its adjacent islands, and in the subantarctic on Auckland and Campbell Islands. The future for yellow-eyed penguins looks increasingly grim, with the most recent data showing that the species has declined by well over 50 percent in recent decades and now numbers less than 2,000 breeding pairs.

Yellow-eyed penguins are monogamous and will breed once a year with their mate. Males do not breed until they are between 3 to 10 years of age, but females usually reach maturity earlier in life. The breeding period runs from August through March and the female will lay 2 eggs in a shallow scrape of leaves, grass, and twigs. Both parents help with incubating the eggs (39 to 51 days) until they hatch. Once hatched, the fledging period takes about 108 days the chicks will remain with their parents until they are about a year old. The yellow-eyed penguin’s lifespan is about 23 years.

Yellow-eyed penguins prey on small marine animals, such as crustaceans, squid, and fish like red cod, opal and sprat. Like other penguin species, they are getting caught and drowning in the nets of commercial fishing operations while the forage for food. The specific nets, called gillnets, are virtually transparent underwater and trap unsuspecting penguins inside along with other marine birds and mammals. It’s not just yellow-eyed penguins who are at significant risk from common fishing materials. Thirteen out of the world’s 18 species of penguins also drown in these same deadly nets. One solution currently being considered is the introduction of black and white sheets that would be attached to the transparent fishing nets to alert birds in the water of their presence. Luckily, this method has shown success in reducing penguin by-catch in other fisheries by over 90 percent.

Listed formally as Endangered by the IUCN in 2010, the long list of ongoing threats to this species includes the loss and degradation of their breeding habitat (forest-shrub), human disturbances (including tourism and domestic pets), marine food shortages, and fisheries by-catch mortality are ongoing. On their breeding grounds, yellow-eyed penguins now must cope with introduced predators, such as rats, feral cats, stoats, ferrets and dogs. These predators are generally not a problem for adult penguins, but predation on eggs and chicks plays a key role in declining populations. In the ocean, penguin predators include sharks, killer whales, sea lions and fur seals. The penguins have no defense against such large predators, relying strictly on swimming speed and maneuverability, or escaping out of the water to dry land. Like all penguins, their black and white coloration gives them the advantage of being invisible from below due to their white chest, or from above due to their black backs.

Yellow-eyed penguins are specialized benthic foragers, relying on a stable and predictable year-round food source within reach of their breeding areas. Food shortages resulting from sea-temperature changes driven by global warming are on the rise. Disease is also an issue for yellow-eyed penguins, with avian malaria responsible for 29 deaths in 2018/19, a large and impactful number for such a small population. With warming temperatures enabling the spread of mosquitos into areas that were formally inhospitable to them, mortality from mosquito-transmitted diseases is expected to increase. 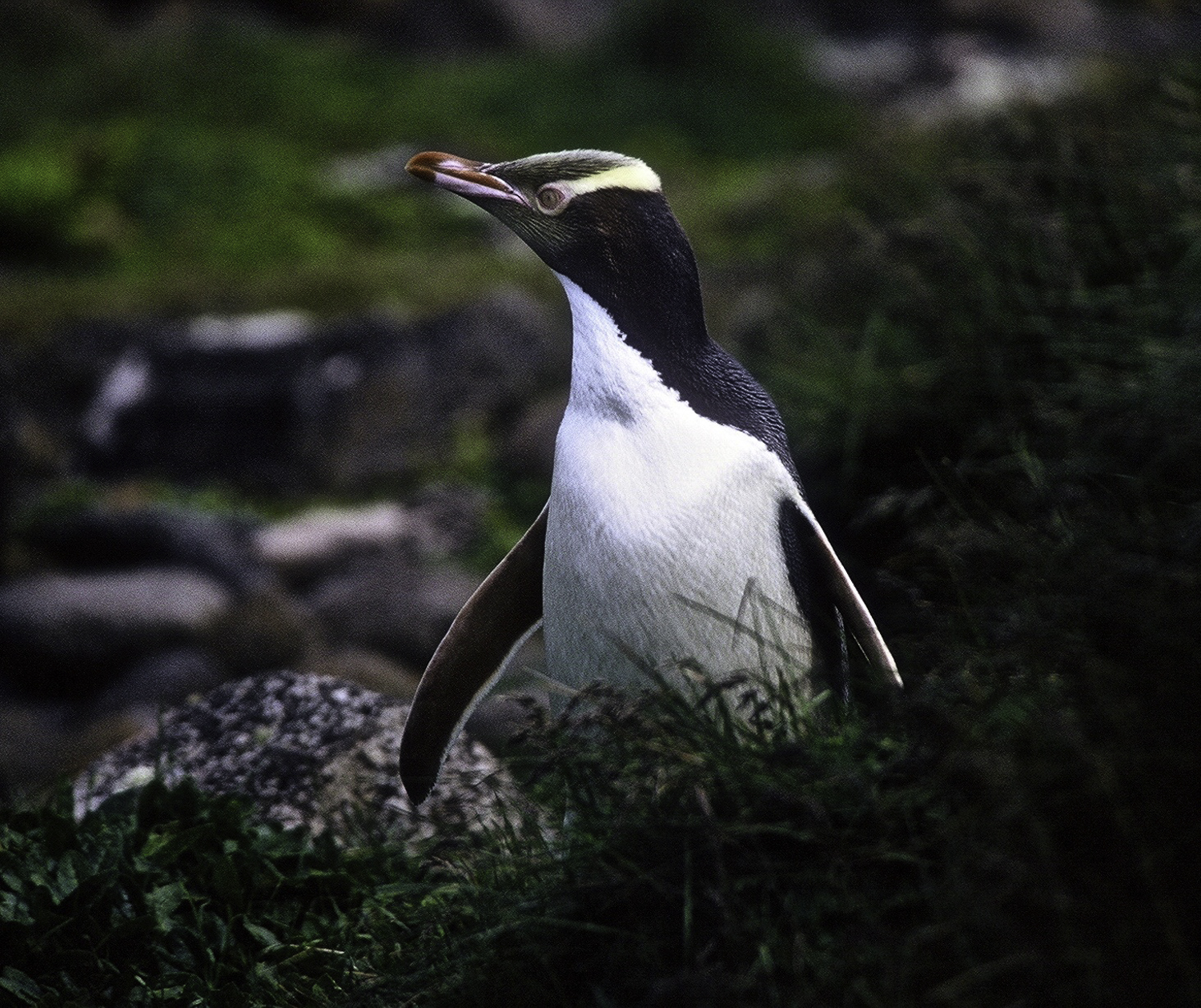 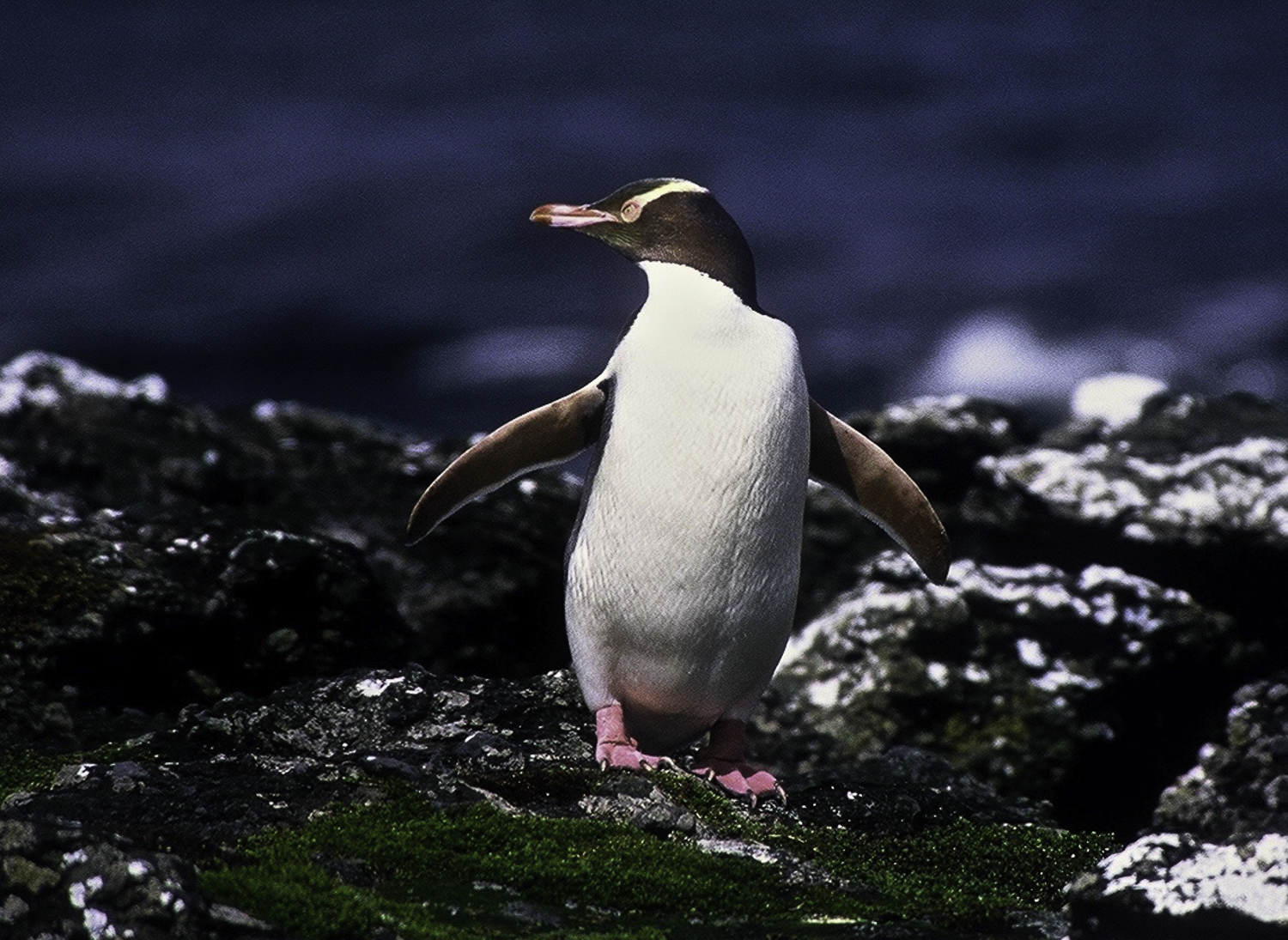