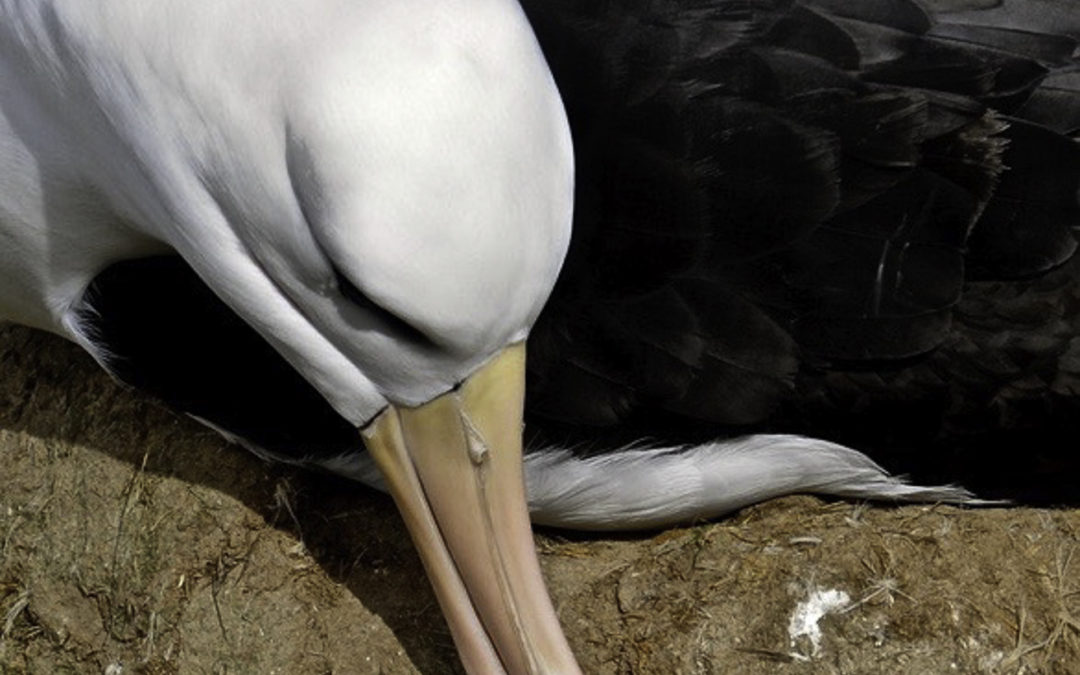 Seabirds live at the mercy of wind and wave, superbly adapted to thrive in one of the most demanding but productive environments on Earth—the ocean. For millions of years, the global ocean has served as “home away from home” for most seabirds. Their far-flung existence depends on the sea’s climate-driven moods, as well as on the environmental health and productivity of the interconnected marine waters that circle the globe. The largest group of seabirds, the tubenoses—albatrosses, petrels, shearwaters, and storm petrels—are distinguished by the tube-shaped, external nostrils on the topside of their bill. In albatrosses, the paired nostrils project from either side of the upper bill. In the other tubenose species, such as the giant petrel and the cape petrel, the nostrils are fused and sit atop the upper bill.

Look closely at the bill of the black-browed albatross, the two giant petrels, and the pigeon-sized cape petrel. Note the nasal tube and the drainage groove that extends down the length of the bill. These highly-specialized bills serve multiple functions, including salt extrusion, olfaction (smell), and the hook-shaped tip of the upper bill helps the tubenose grab slippery prey (fish and squid). Given their sea-based lifestyle and salt-rich diet, tubenoses have specialized glands, located above the beak and just under the eyes, which filter out excess salt from their blood, liquifying the concentrate so that it can be ejected via the nasal tubes that are used for olfaction.

What is unique among all tubenoses is how important the sense of smell is in everything they do. We perceive our world visually, and scent plays only a minor role in our daily lives. Did you know that tubenoses use their finely-tuned sense of smell to locate plankton blooms and massive krill swarms in the sea? Until about 40 years ago, most people thought birds had little if any sense of smell, except for carrion aficionados like vultures and condors. Thanks to groundbreaking research by Dr. Gabrielle Nevitt and her colleagues (UC Davis), we know that tubenosed seabirds have evolved not only extremely efficient navigation behaviors but also the ability to track the airborne chemical odors given off by their prey. Tubenoses rely on their extraordinary sense of smell in creating a “seascape scent map” of what, to our eyes and noses, is a featureless expanse of ocean. Although these ocean navigators may use a magnetic-based map embedded in their brain to find their way to a source of food—they also “smell” their way around the ocean, recognizing scent “waypoints” from previous trips and adding new ones to their brain-based map as they explore new areas.

Discovering that the source of the sea’s tangy aroma and the scent that attracts tubenoses to a possible seafood banquet are one and the same, I was inspired to learn more about a climate gas that most people have never heard of—DMS, or dimethyl sulfide. So, what is DMS? Forming base of the marine food web, phytoplankton and zooplankton (=plankton) are as crucial to the survival of the billions of waterbirds that travel the world’s flyways as they are, ultimately, to all life on Earth. Where zooplankton are foraging on a bloom of phytoplankton—or wherever bacterial decomposition and spontaneous degradation of phytoplankton is underway—the volatile compound dimethyl sulfide (DMS) is released into the sea and diffuses into the atmosphere as a gas. DMS is critically important as a climate gas because it provides the condensation nuclei that generate the clouds that cool our planet—a major force in shaping global climate systems. DMS is also one of the major sources of sulphur in our atmosphere, and scientists estimate that over 1 billion tons of it is produced by marine phytoplankton, bacteria, seaweeds, and some corals. Tubenose seabirds, such as albatrosses, are able to detect a DMS “scent cloud” when they are miles away from the source. 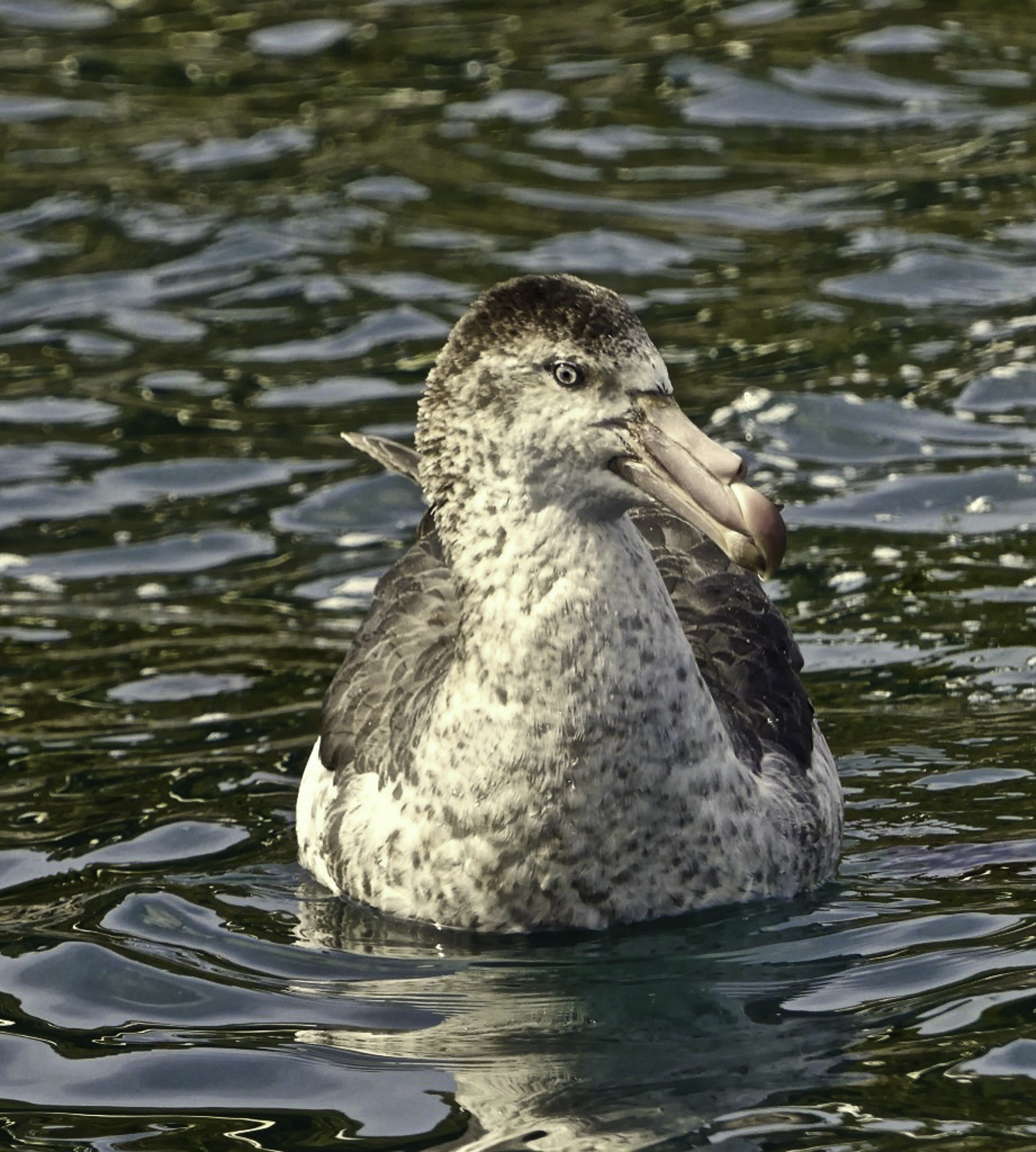 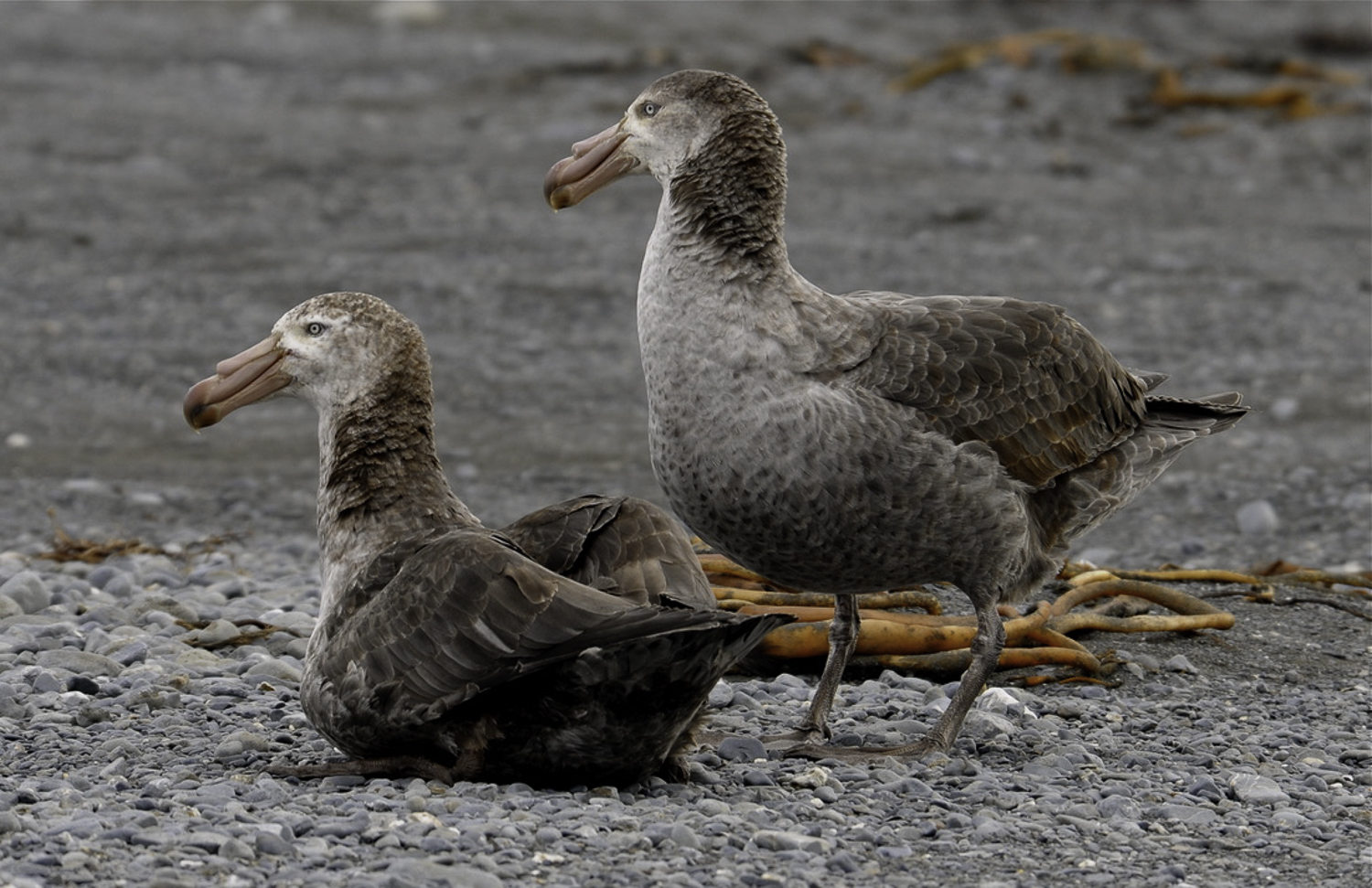 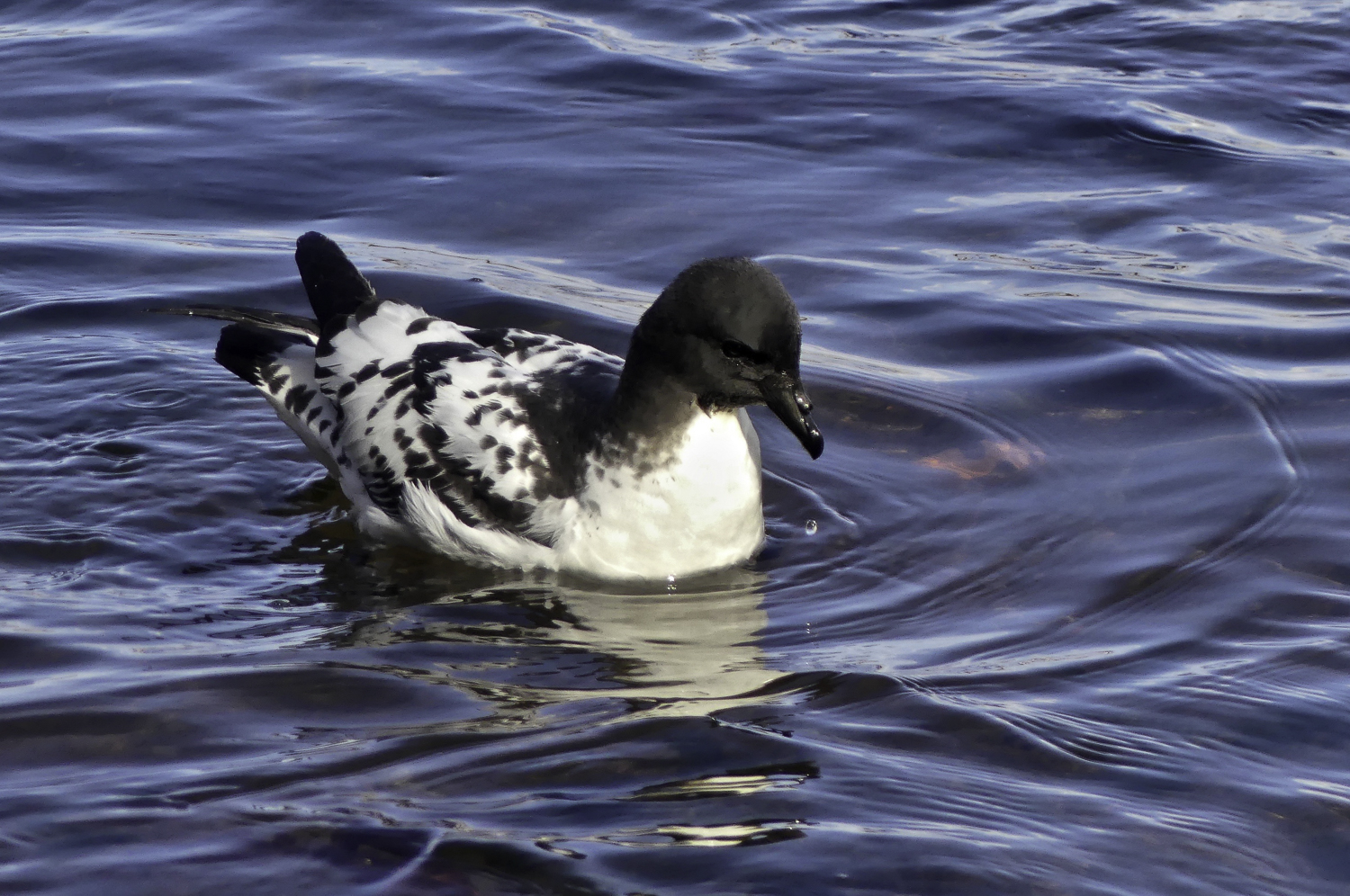 Sadly, the tubenoses’ fine-tuned sense of smell serves them poorly in oceans plagued by plastic pollution. When submerged, the surfaces of plastic objects tend to accumulate microalgae and organic detritus in a process known as “biofouling.” Recent research has shown that it takes less than a month for certain types of plastic (especially nylon and microplastics) to develop this coating, which then gives off the DMS aroma. Unfortunately, this DMS-scented biofouling smells just like the brightly-colored zooplankton, invertebrates (squid!), and small fish that tubenose seabirds love to eat. My photograph of a Laysan albatross carcass, taken during a 1998 Cloud Ridge trip to Midway Atoll (at the northern end of the Hawaiian Archipelago) provided my first introduction—more than 2 decades ago—to plastic pollution and its impacts on marine life. The second photo was taken by Chris Jordan, who has been documenting plastic ingestion by albatrosses in the Pacific since 2009. Note that in both photos the Laysan’s stomach is packed full of plastic bits. Both are adult albatrosses (probably between 25-35 years of age) and both died, no doubt, of starvation. The message here is clear! 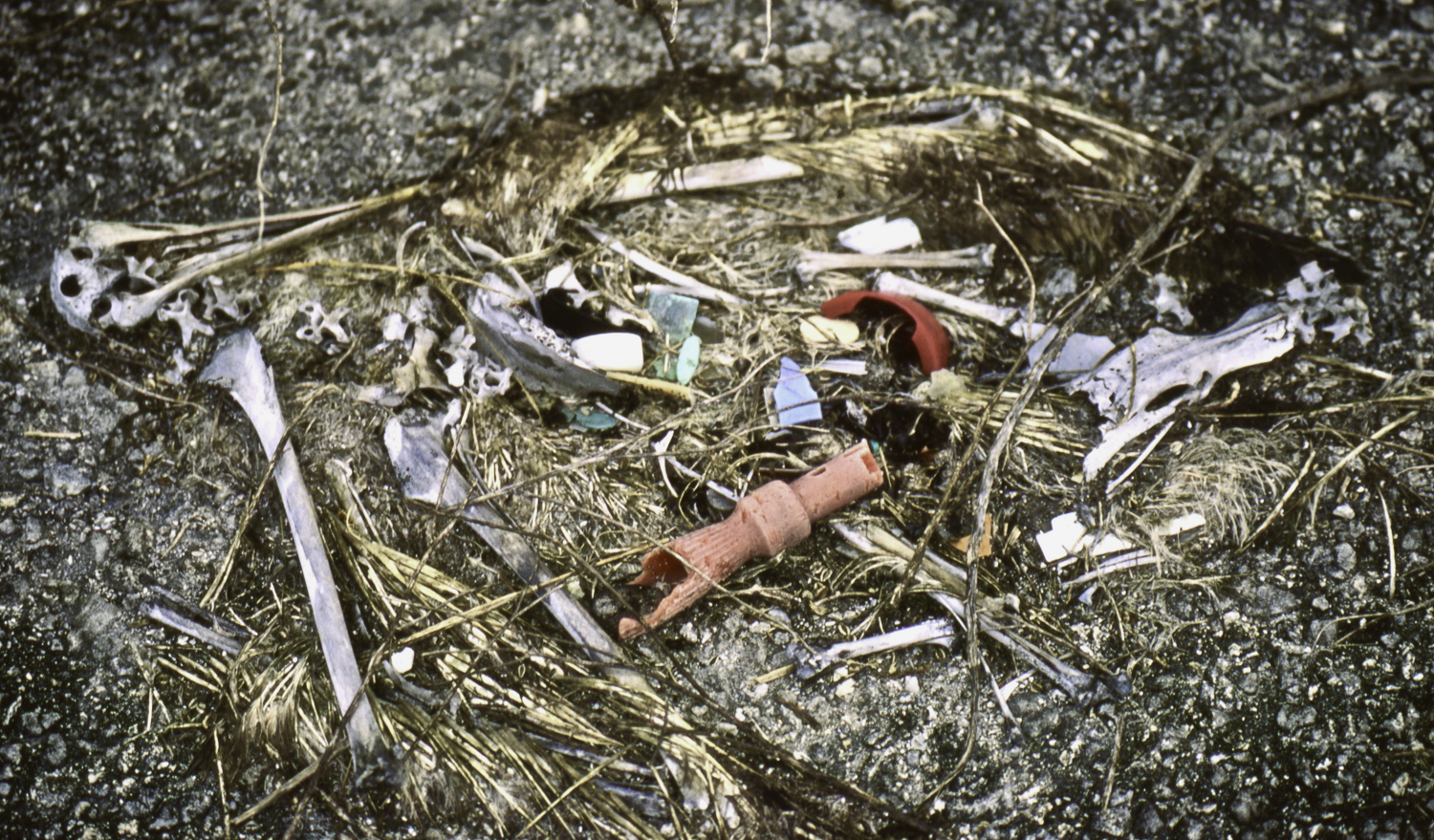 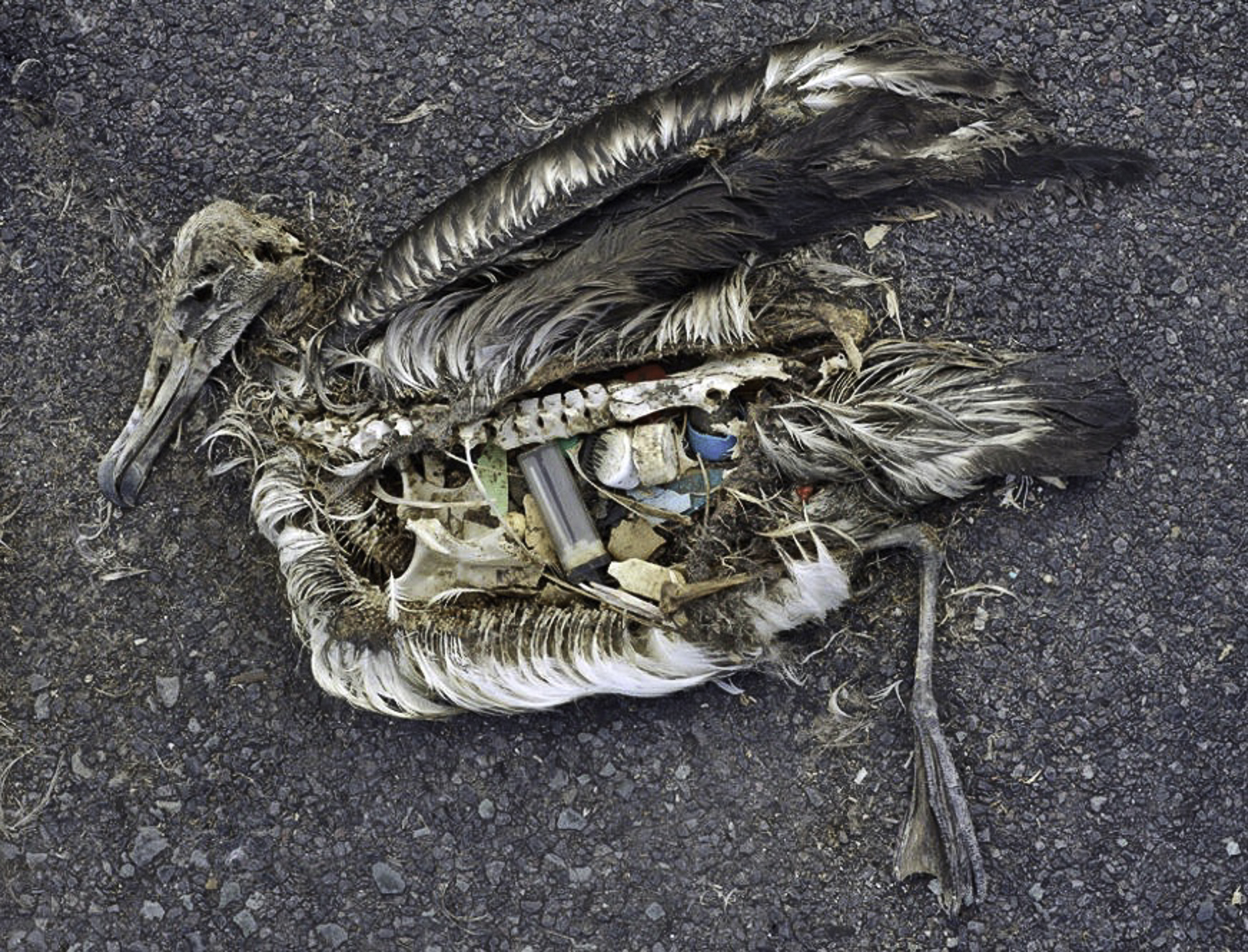