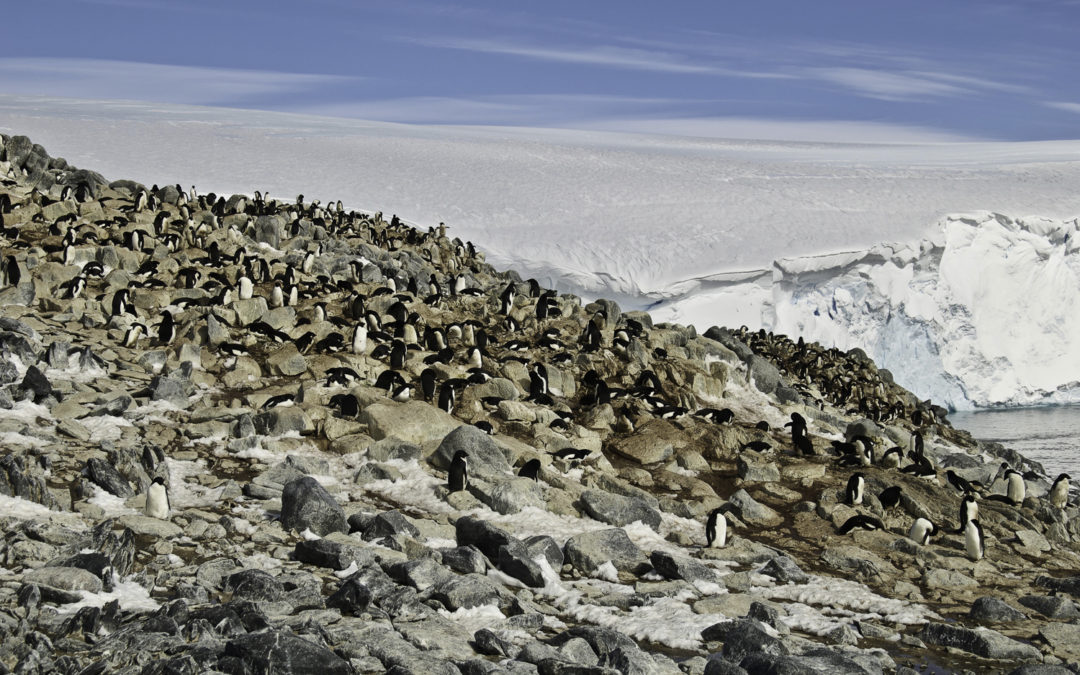 It is “mud season” in the Adélie penguin colony at Cape Denison. As you can see in this ridge-perched colony of Adélies, sunny spring days have left a few lingering patches of snow. As I sat and watched, Adélie penguins were coming and going from several colonies, with mud-brown breasts on the way down the steep snow slope to the water’s edge and pristine white and black tuxedo-like plumage on their return to the colony. Note the penguins sliding down to their seaside “spa!” Adélie penguins are members of the “brush-tailed” penguins (gentoo and chinstrap penguins are also in this penguin group). You can easily see the stiff, quill-like tail feathers in photo #3. The generic name for this penguin group, Pygoscelis, means “rump-legged” in Latin. Adélie penguins have a circumpolar distribution and the IUCN currently lists them as Near Threatened, but mounting evidence of an increasingly rapid rate of population decline due to the effects of climate change may soon be upgrading their status to Vulnerable.

Adélie penguins are highly migratory during the winter months, visiting feeding grounds that may be hundreds or even thousands of miles from their breeding colonies. During the time when they remain at sea, they tend to forage primarily in areas with pack-ice up to about 80% cover, often several hundred miles south of open water. Researchers have suggested that they appear to be dependent on visible light for foraging during the winter months. The Adélies in the East Antarctic return to their breeding colonies in mid-October, with variability in arrival timing affected by local and/or regional sea-ice conditions, and significant delays can occur in years with extensive sea ice.

The size of Adélie breeding colonies varies greatly and depends on the availability of suitable rocky habitat that melts out early in the season. Older, more experienced penguins generally arrive at the colony earlier than the younger birds. After arrival, Adélies remain at the nest site until egg laying begins, which averages about 21 days. Males initiate nest building by choosing the site, but both sexes build the nest. The nest consists of simple scrape lined with and surrounded by small stones and pebbles. Nests are constantly being added to, with the stones often being transported a considerable distance held in the beak or may even be “stolen” from a nearby nest.

The complex relationship between Adélies and their primary food, krill, drives the timing of egg laying, with the number of eggs laid (2 or 1) depending on local conditions. Eggs are laid a couple days apart and egg laying is relatively synchronous throughout the colony. Both males and females alternate incubation tasks for spans lasting a week or more before they rotate shifts. Incubation lasts anywhere from 32-43 days, and the first egg generally hatches a few days before the second. Hatching is also generally synchronous between nests (which are often no more than a meter apart in the colony). Some chicks hatch in 24 hours, while some can take up to 48 hours. In photo #6 look closely to see two tiny gray chicks beneath the parent on the nest.

The parents share guard duty and feeding responsibilities, with food deliveries once or twice a day. Time to fledging is highly variable and ranges between 55-64 days. Breeding success for Adélie penguins is also highly variable from year to year and is lowest in years with late spring snowstorms and when sea ice persists, which can affect the abundance of their prey (krill) or the travel distance from the colony to the preferred foraging areas. More about this in a future ePostcard. 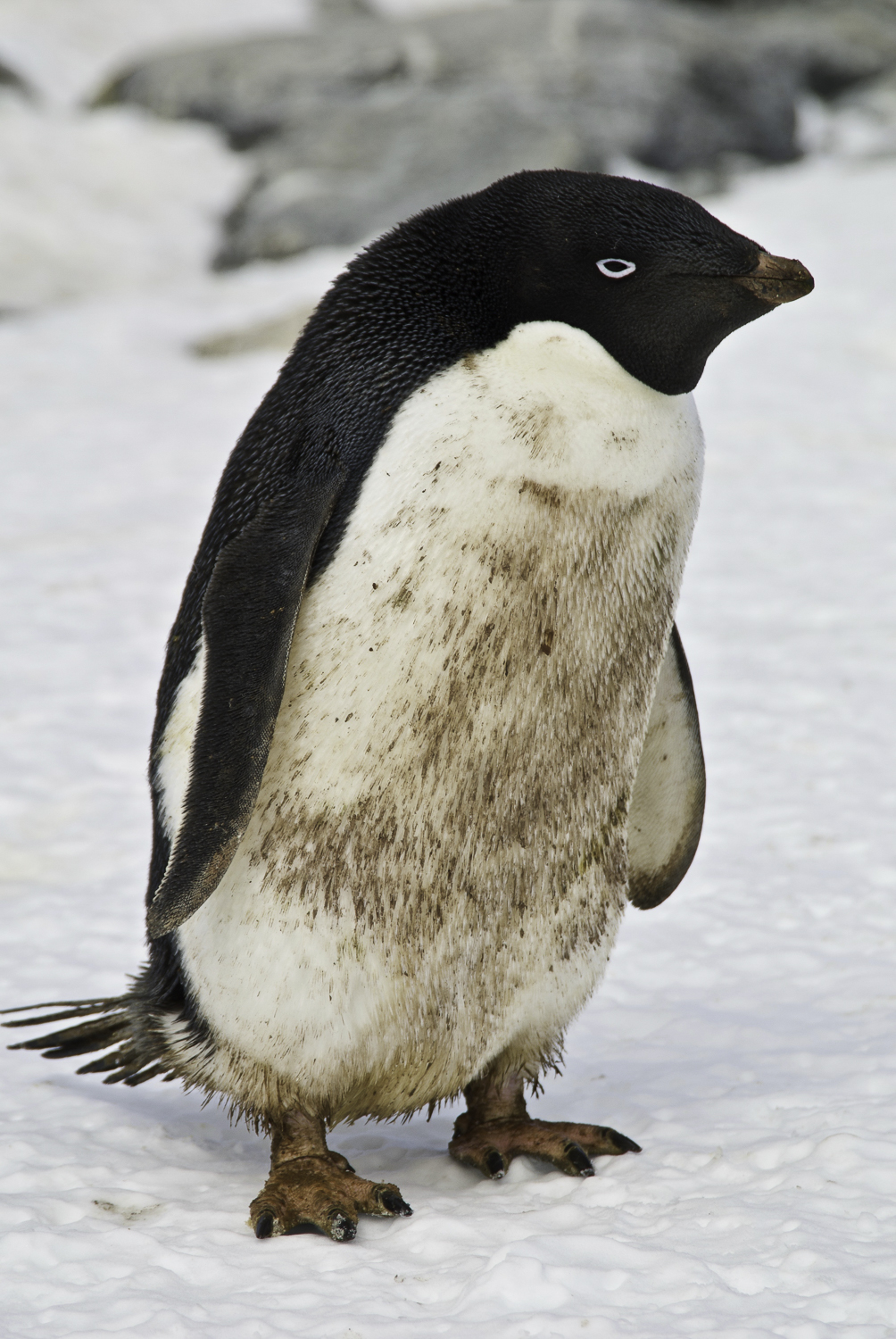 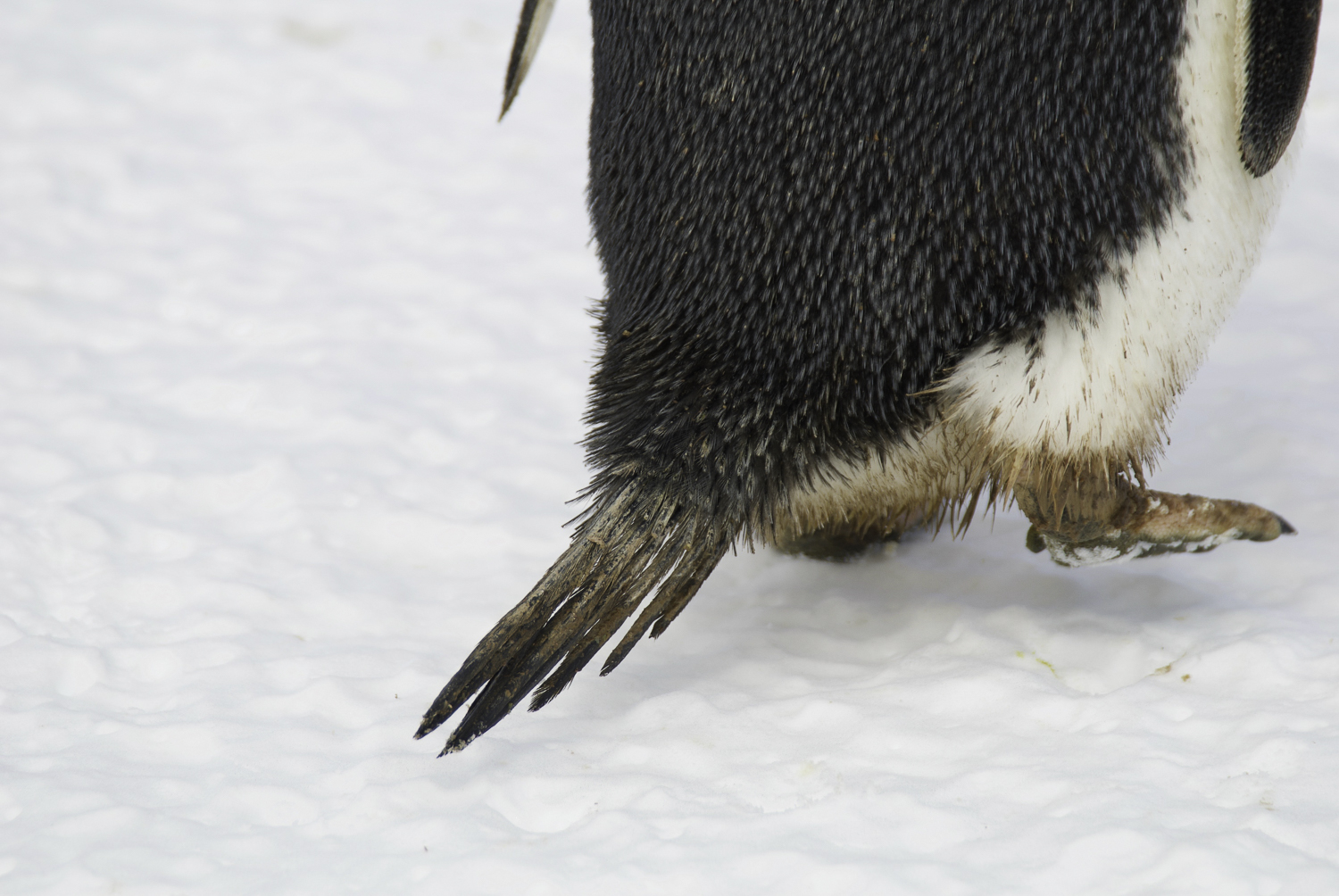 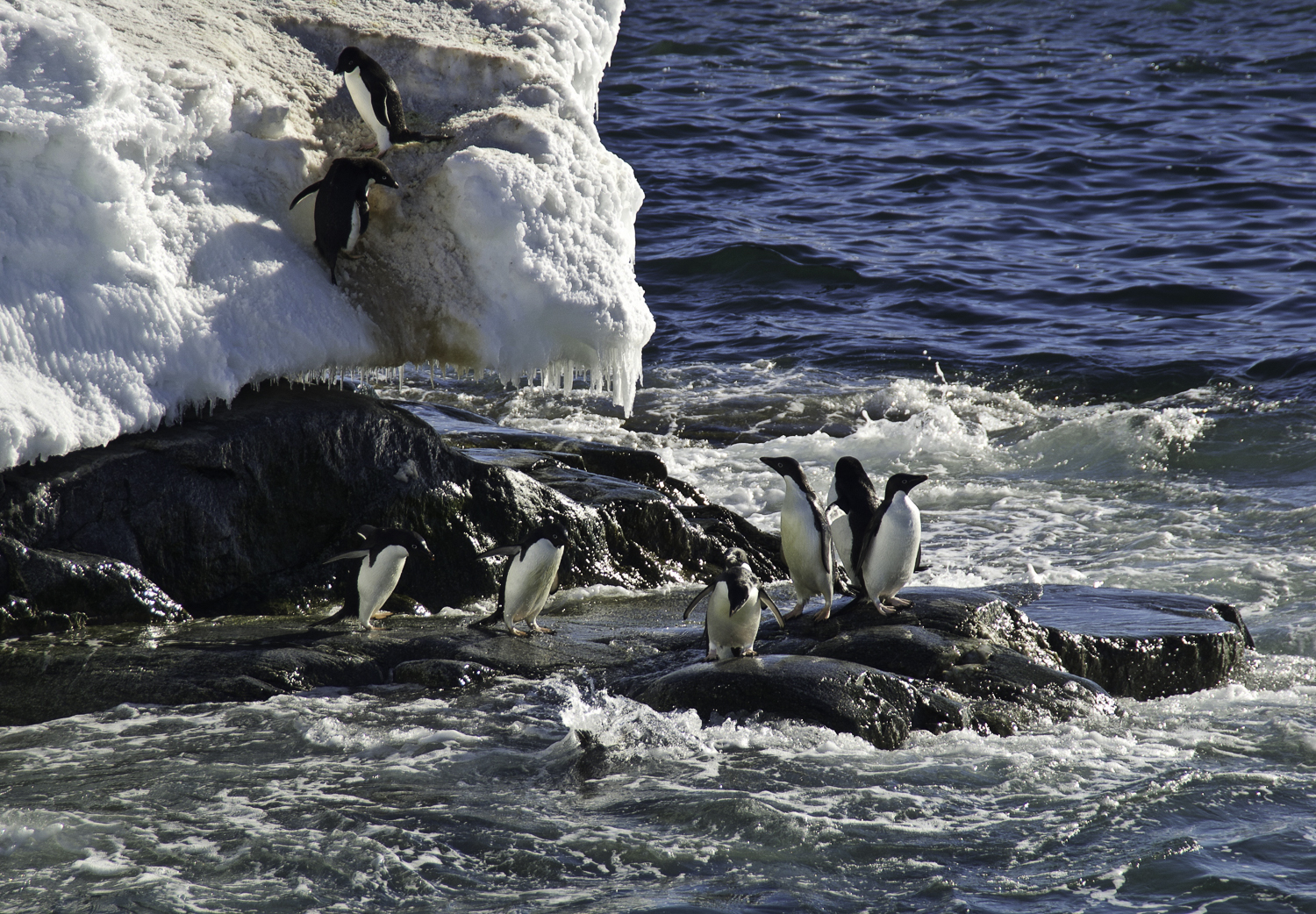 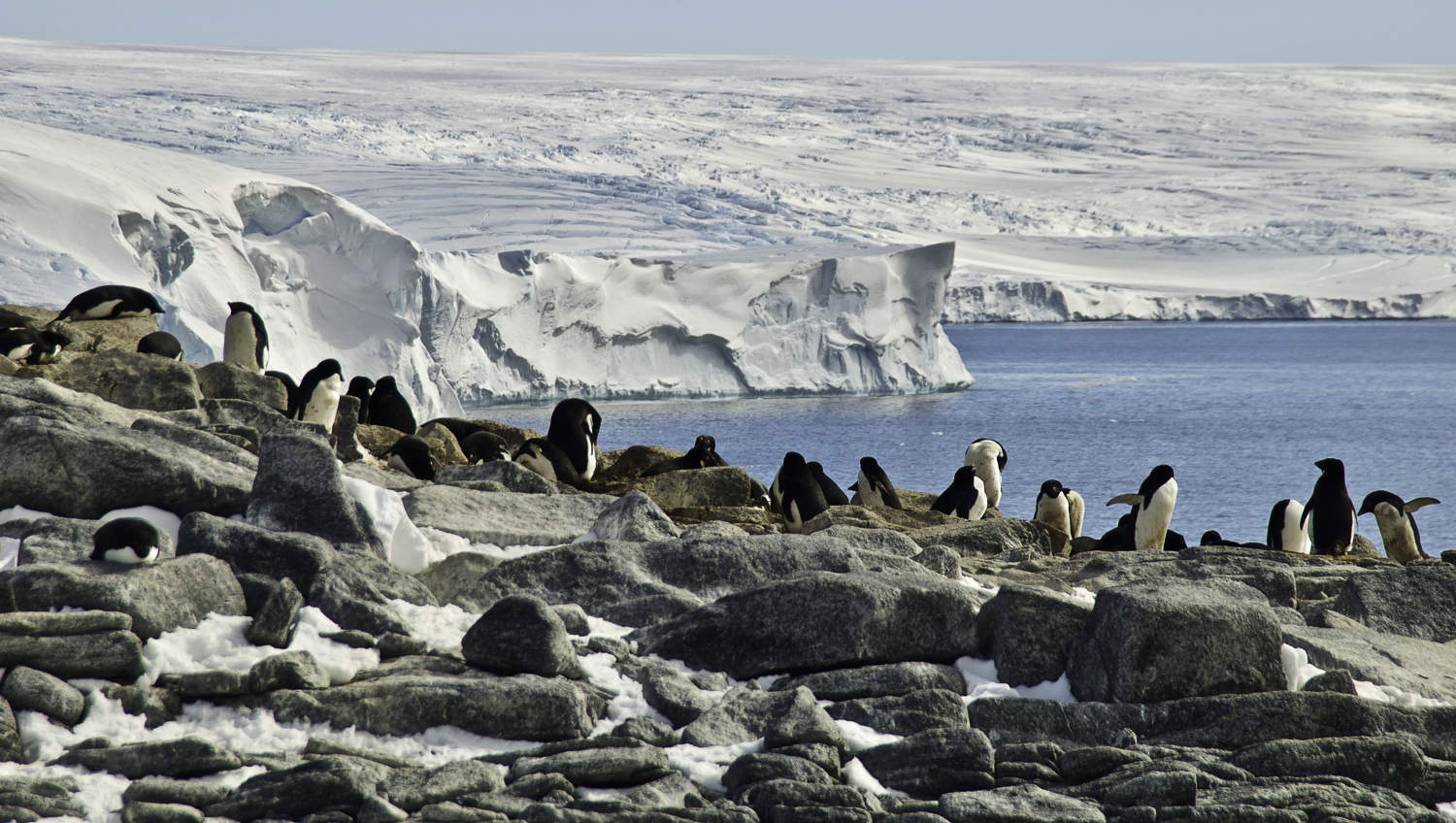 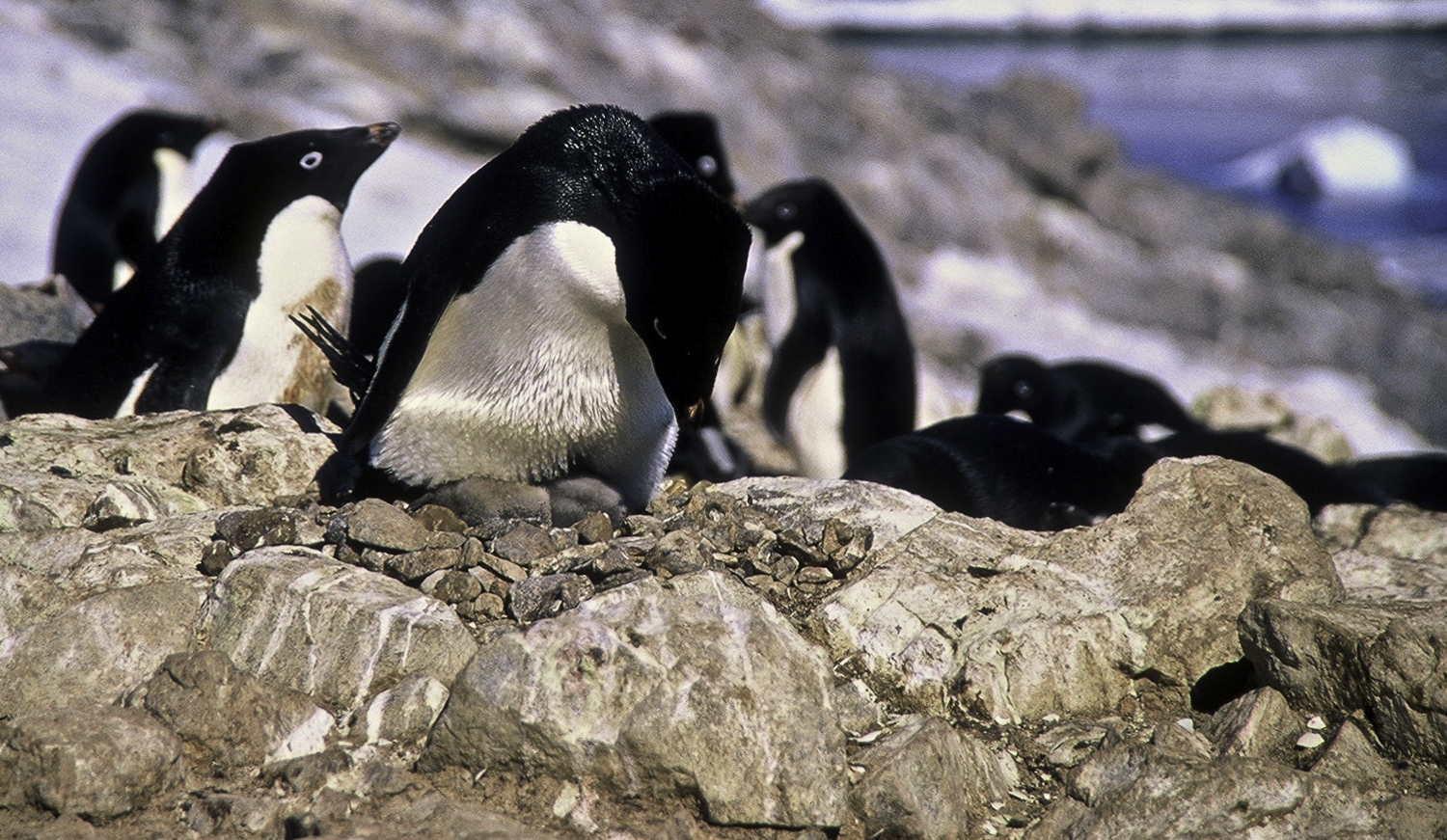