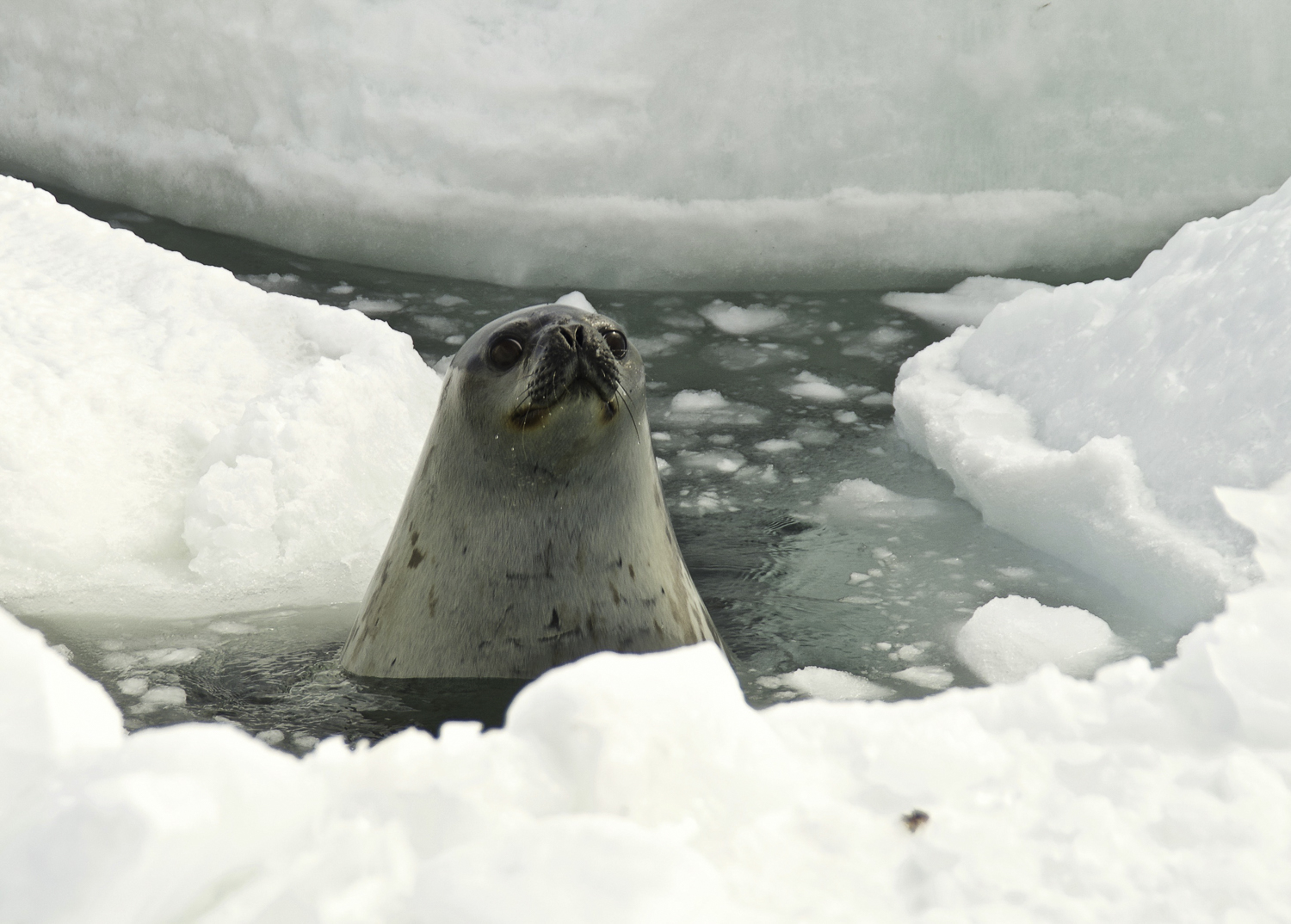 The Adélie penguins and crabeater seals that share the ice landing at Cape Denison (photo #2) appear to coexist as if the phrase “Peaceable Kingdom” still has some validity in the natural world. Crabeater seals are the most abundant seal species in the Southern Ocean, and the most numerous of all the world’s larger animals apart from humans. They have a circumpolar distribution and an estimated population size of about 15 million. Recent evidence suggests that these seals may also be in decline. Adult female and male crabeaters tip the scales at anywhere between 400 and 600 pounds. Males and females are generally close in size with females typically slightly heavier. Their scientific names of “Lobodon” and “carcinophagus” mean “lobe-toothed” and “crab eater” respectively. They spend their entire lives in the pack-ice zone surrounding Antarctica, resting, breeding and molting on the ice, and feeding in the surrounding waters. These seals can move large distances through the pack-ice, both by actively swimming and by passively traveling on drifting ice floes. They often take advantage of breathing holes in the pack-ice made by Weddell seals, sometimes chasing the young Weddell seals away so that they can claim exclusive rights to a particular breathing hole. Crabeaters generally move southwards in spring, and northwards in autumn, in tune with the seasonal contraction and expansion of the pack-ice.

Contrary to their name, crabeater seals don’t eat crabs. Krill make up to 95% of their diet, and the most important krill species is Euphausia superba. This seal’s common name comes from the German word, ‘Krebs’, which refers to other crustacea as well as crabs. Crabeater seals have evolved distinctive and complex teeth, which are considered the most specialized of any carnivore. Each tooth has tubercles, or bony protuberances, with spaces between them. The upper and lower jaws fit together so that when the mouth is closed, the teeth and tubercles can effectively strain krill, functioning much like baleen does in whale species such as humpbacks. Crabeaters feed by swimming through schools of krill with their mouths open, closing their jaws to trap the krill inside and then effectively sieving the water out between their specialized teeth. These seals do most of their feeding at night, and can dive as deep as 1400 feet, although feeding dives are usually no more than 100 feet. A single hunt can last up to 16 hours, and will involve hundreds of dives.

Crabeater seals are probably the most sociable of the Antarctic seal families. When younger, these seals will gather together in haul out groups that can number up to 1,000 individuals. Older seals tend to hunt alone or in groups of 3 or 4 individuals. Crabeaters reach sexual maturity starting at 3 years of age, and breeding occurs on pack ice in early spring between October and December. Unlike other seal species, crabeaters mate on the ice rather than in the water. Following an 11-month gestation period, females haul themselves out alone to give birth to their single pup on an ice floe. An adult male (not the biological father of the pup) will attend to the mother and pup until about 2 weeks after the pup is weaned, at which point the female will be ready to mate again. The pups are about 4 feet long at birth and weigh about 55 pounds. Nursing on their mother’s milk, they’ll gain around 9 pounds every day until they’re weaned at only 2 or 3 weeks, at which point they’ll already weigh nearly 220 pounds. The mother may have sacrificed up to half of her own bodyweight by this point. Pups are born with a light brown down which they lose when they undergo their first molt at the time they are weaned. The first down coat is replaced with a darker brown fur that fades to a lighter shade on their bellies. This fur will lighten over time, resulting in the light grey to blondish fur sported by mature adults. Crabeater seals are known to live up to 40 years in the wild.

We saw no pups at Cape Denison and I surmised that the female I photographed (photo #3) was very pregnant and seemed mildly stressed. I noted the blood just behind her and backed away to leave her in peace. About 8 hours after I photographed her, I followed a curving blood-spotted trail in the snow and found her asleep in a more remote area (photo #4). I could see the gash on her side where she had probably been attacked by a leopard seal (photo #5, caught in mid-yawn!), a serious predator with teeth superbly adapted for killing. Leopard seals are the crabeater’s major predator, and young pups are especially vulnerable. Most adult crabeater seals will have multiple scars on their bodies, most resulting from unsuccessful attacks from leopard seals when they were younger. Killer whales also successfully hunt and eat young and adult crabeater seals. When threatened crabeaters will snort, hiss, show their teeth, and roll over multiple times. This is probably a tactic that has evolved to help them evade killer whales and leopard seals. On land, crabeater seals have an almost snake-like method of movement, weaving their front and back ends back and forth in a curving motion. Using this method they can reach speeds of 25 km per hour for short bursts. In the water, they can reach speeds of almost 13 km per hour. As we lifted anchor and got underway, we spotted a leopard seal hauled out on the ice (photo #6). What huge eyes! 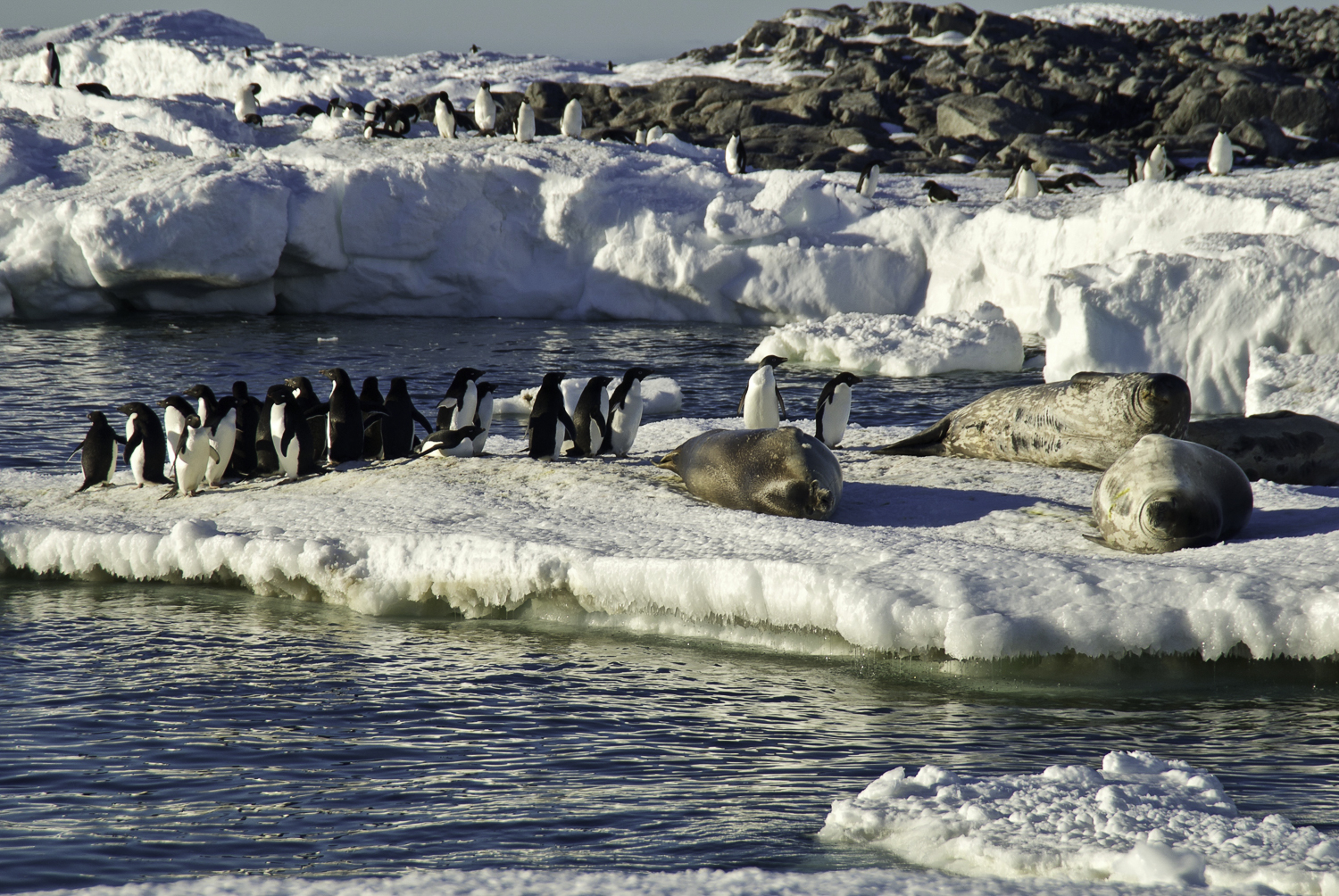 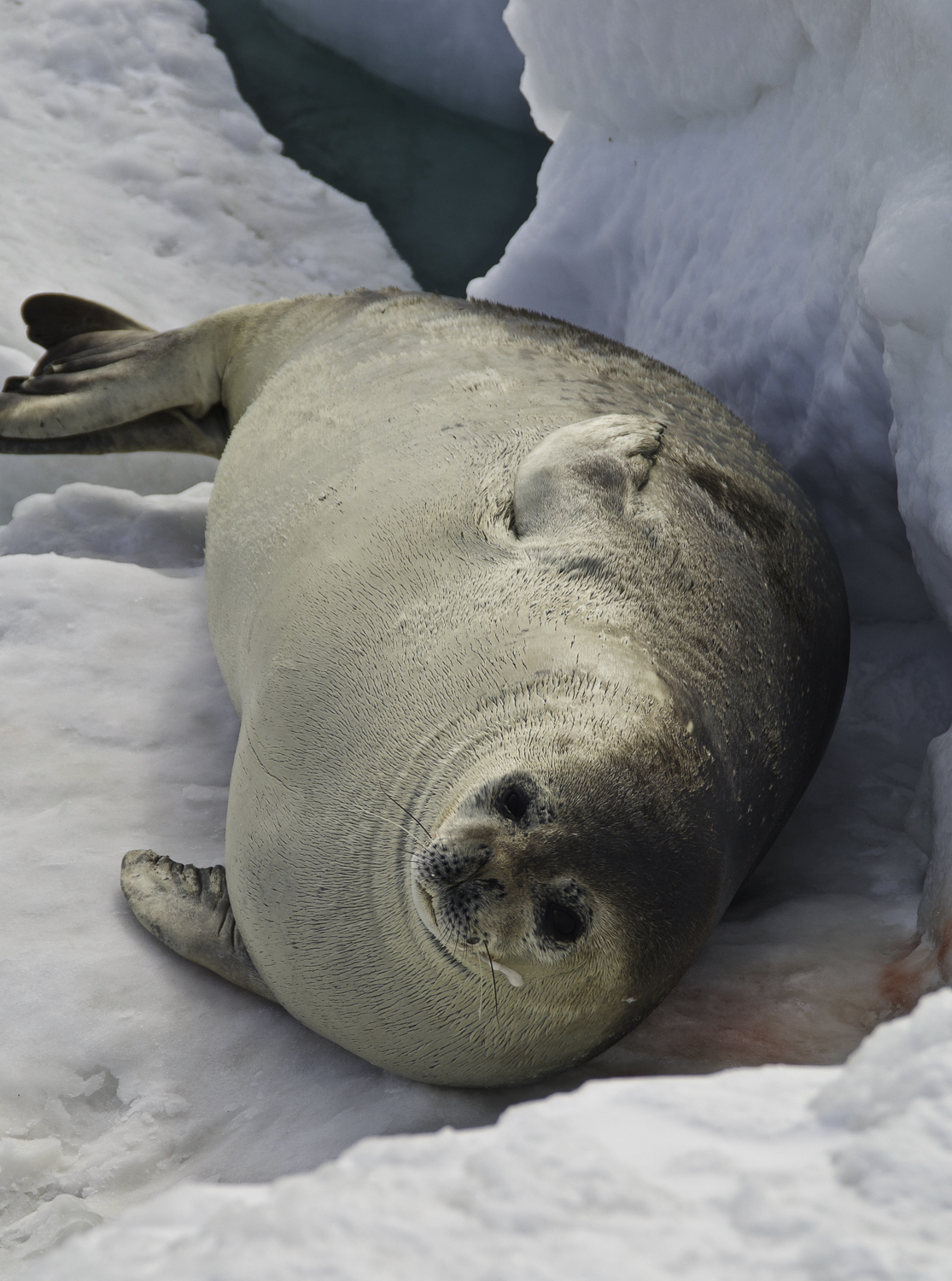 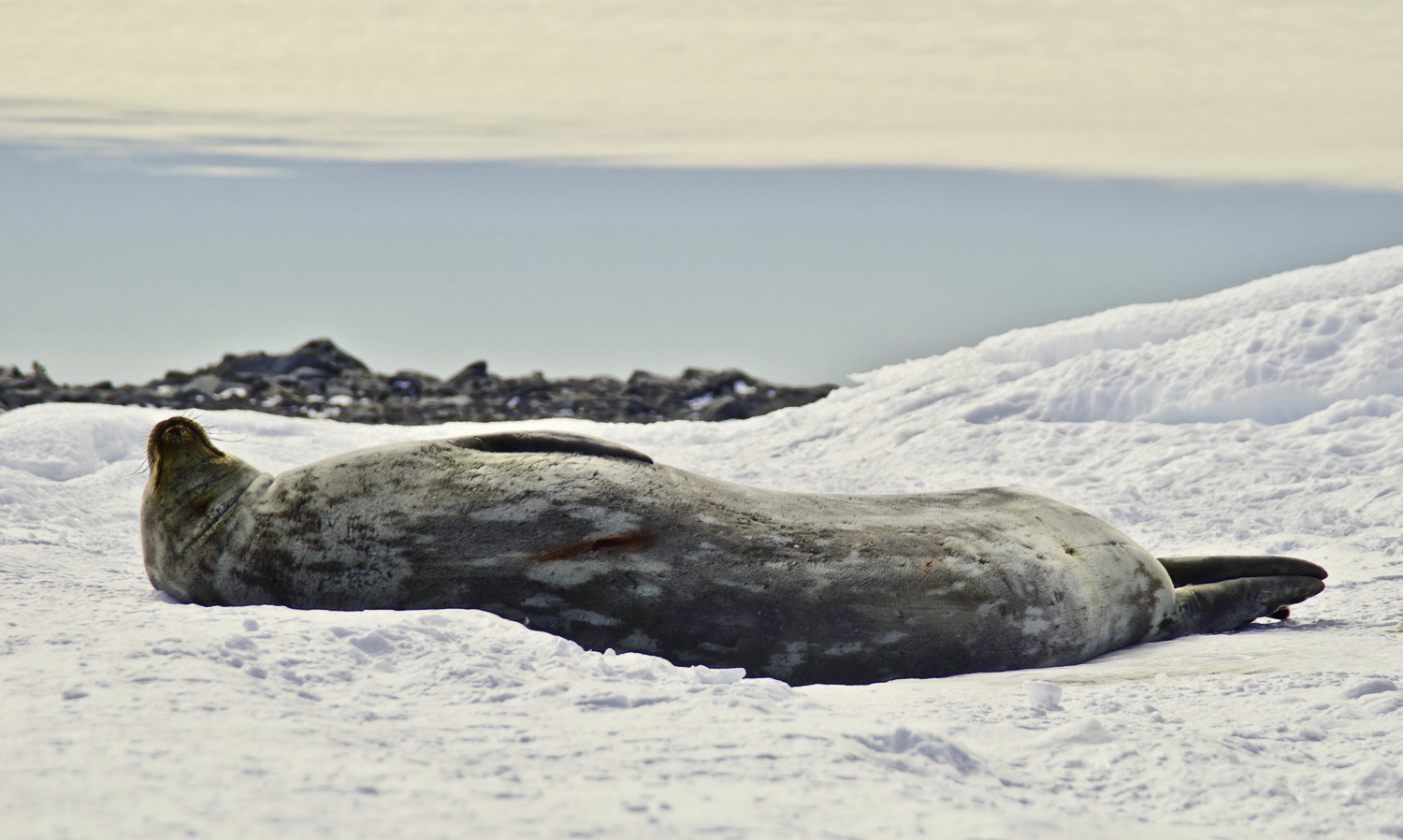 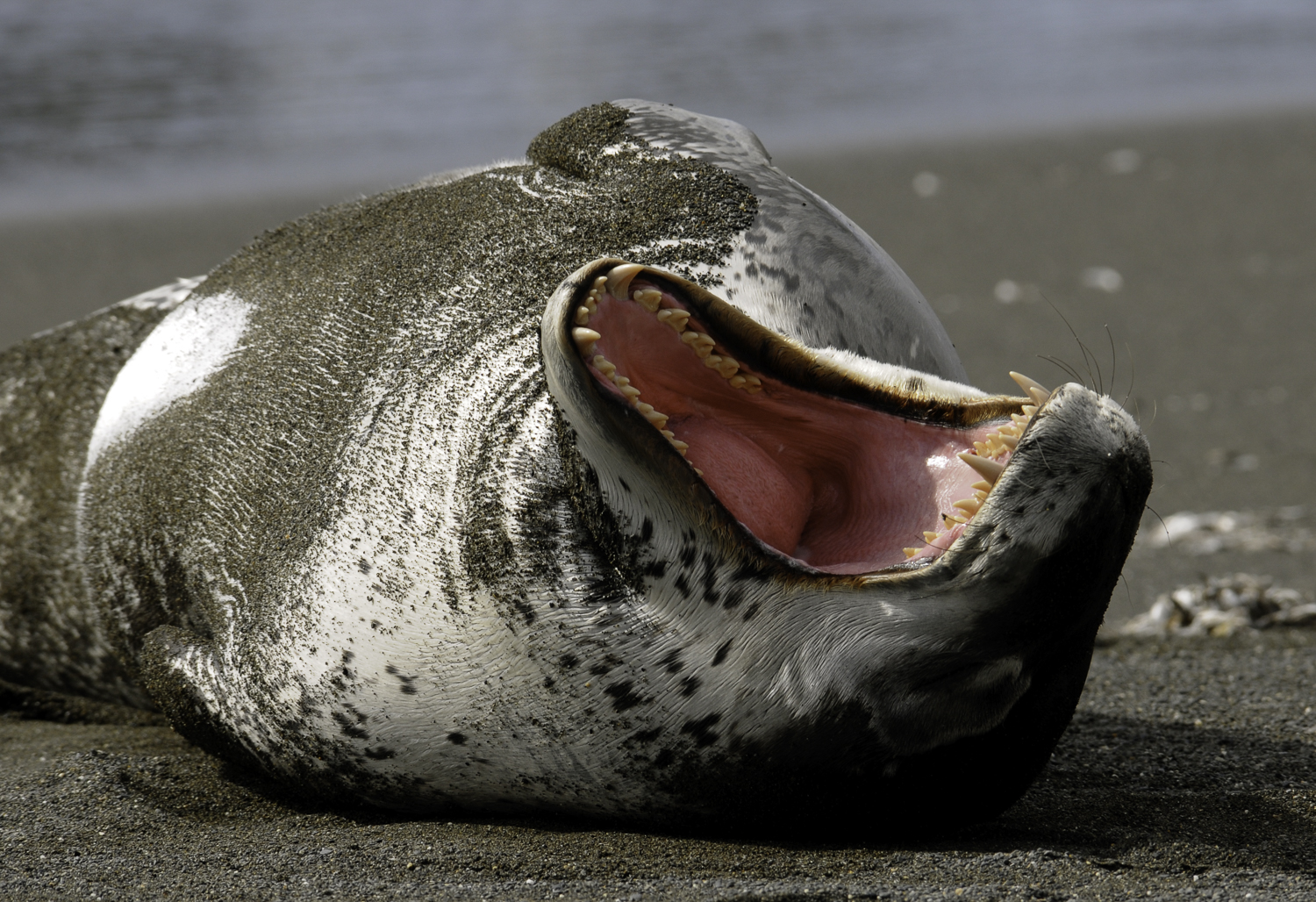 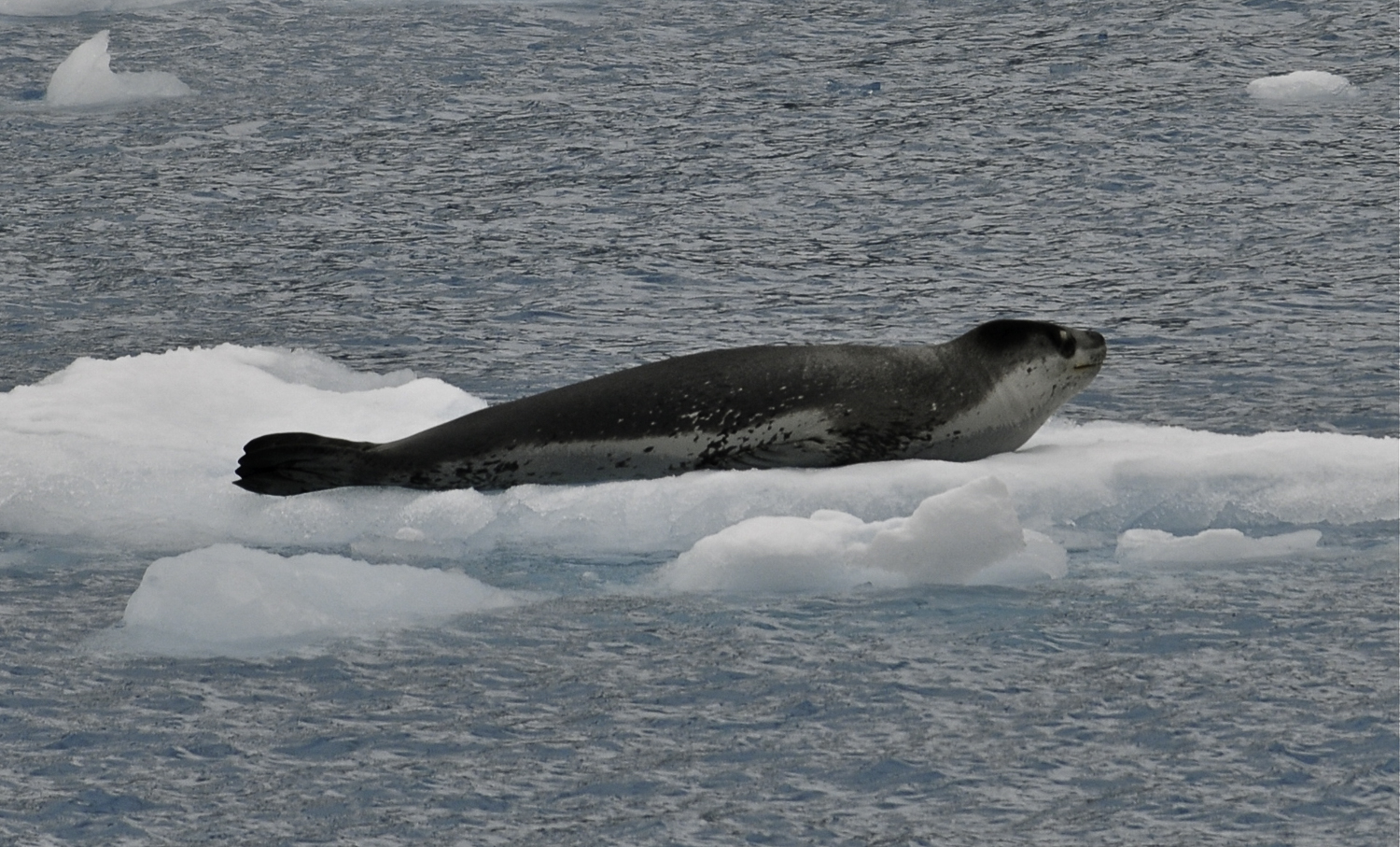