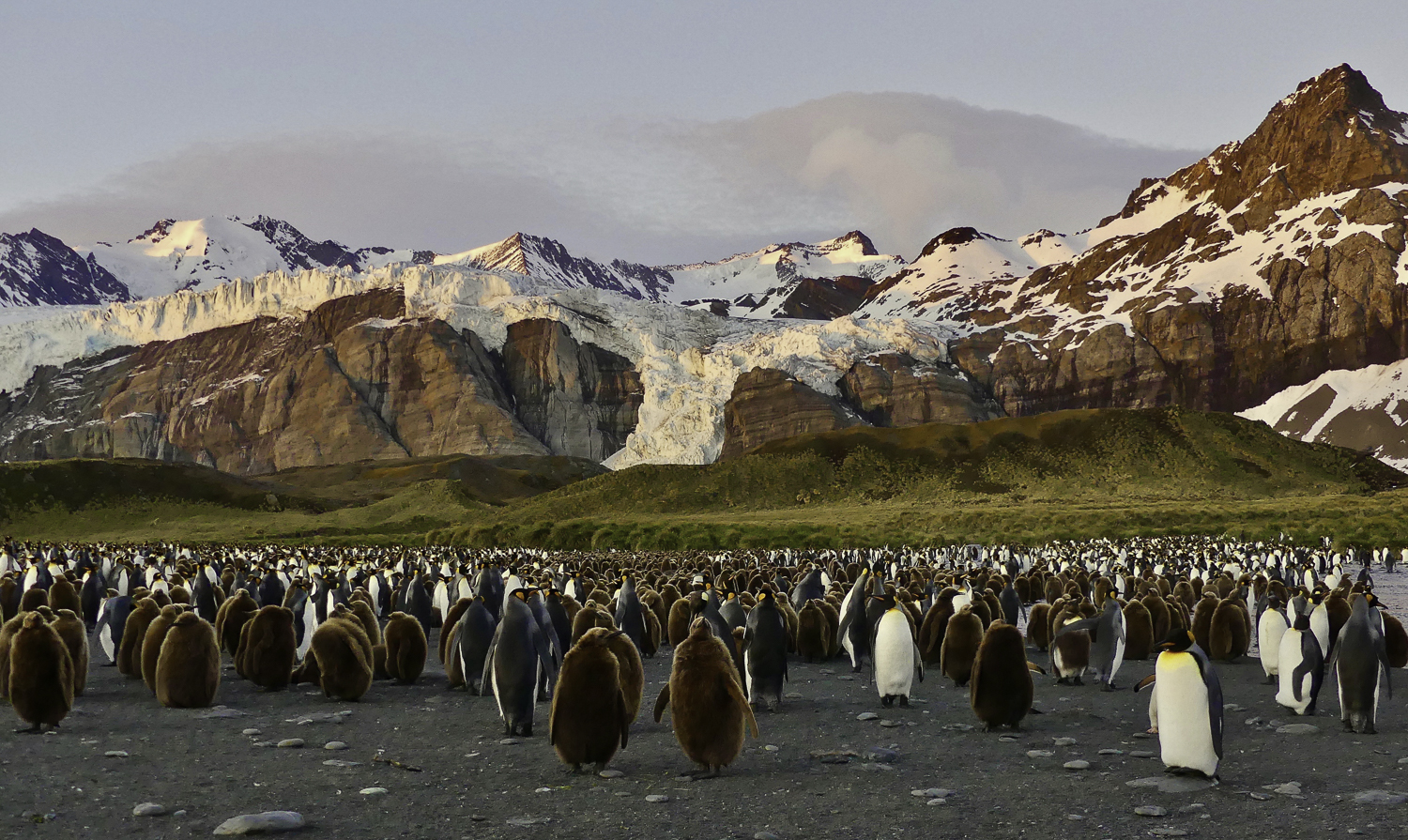 Penguins undeniably assume center stage for most visitors to South Georgia, and the cast of characters includes king, gentoo, chin-strap and macaroni penguins. This pre-dawn trip (2018) to the enormous king penguin colony at Gold Harbour was a total sensory experience, the air pungent with the odor of guano and the entire penguin-scape illuminated by alpenglow. Just the sheer numbers of king penguins (estimated at 15,000 breeding pairs at this one site) was overwhelming, adults and juveniles standing nearly shoulder to shoulder against the stunning backdrop of the Bertrab Glacier. With a soundtrack provided by a raucous, thousand-strong penguin chorus, it might well have been the finest way to start a day I’ve ever experienced.

Second in size only to the emperor penguin, the 3-foot high adult king penguins look so different from their chicks that European explorers in the early 18th century thought them to be a different penguin species. During the heyday of whaling in the Southern Ocean, the brown-feathered chicks were called “oakum boys” because they resembled sailors who became covered in the tar and hemp fiber compound they used to caulk cracks between the wooden planks on the whaling ships. During the 19th and early 20th centuries, after decimating the fur seal population, the sealing industry turned to killing and processing king penguins as a source of oil. Many populations were nearly exterminated through these activities. In recent decades the global population of king penguins appears to have stabilized at approximately 1.6 million breeding pairs.

King penguins tend to form large and very dense colonies, with several hundred thousand breeding pairs total in the major colonies found on Crozet, Prince Edward Island, Kerguelen Island, Heard Island, South Georgia and Macquarie Island. Most colonies occupy level ground near the sea or gently sloping moraines that become free of snow and ice early in the breeding season, and are occupied year round by either the chicks, the adults, or both.

King penguins are quite specialized in the prey they catch. Their diet comprises mainly lantern fish (myctophids), which are especially important during the breeding season. Over winter, the percentage of squid increases in their diet. King penguins fitted with depth recorders have been found to dive to at least 160 feet during the majority of their foraging dives. They regularly dive deeper than this and have been recorded at up to 1600 feet. Deep dives tend to occur during the day, while shallower dives happen mostly at night because they hunt prey that produce light by bioluminescence, which is how the penguins can see to fish at night. At sea, predators of king penguins include leopard seals and killer whales. In the colonies, skuas, sheathbills and giant petrels take eggs and young birds.

The king penguin breeding cycle is quite unusual and much longer (13–16 months) than that of any other penguin species. The mating season begins with the arrival of the adults back at the colonies after long periods spent at sea. Breeding is preceded by a molt, during which the adults shed their old feathers and slowly replace them with new ones. Like the juveniles, adults cannot fish for food until they have an all-new and fully-functional set of feathers, so this molt period is one of starvation and the penguins survive on body fat reserves. Mating occurs during this time ashore, after which the breeding pair returns to the sea for about 3 weeks. To attract a female, the male engages in a behaviour called an ecstatic display, in which he produces a trumpet call and stretches his head upward to become as tall as possible. Both partners then participate in a visual display in which the head is shaken or alternately thrown back and dropped downward toward the chest. The pair is monogamous throughout the remainder of the breeding season.

Like their close relatives, the emperor penguins, kings do not build a nest. Unlike Adélie penguins, egg laying in the colony is highly asynchronous. Eggs are laid from November to April, and the female will lay a single egg. Incubation takes about 54 days and both parents take turns incubating the egg. For the first month or more after hatching, the chick continues to be warmed by the feet and brood patch of the parents. It will be fed by the parents until it is large enough to survive on its own. During the subsequent 313-day fledging period, both parents forage for extended periods, and the chick may go 3–5 months between feedings. While its parents are away, the chick will gather with others in crèches (groups of young) for protection. Chicks cannot go into the water until they have lost their fluffy brown juvenile down that is an excellent insulator in the air, but a very poor insulator when wet.

Young king penguins become completely independent at the end of the fledging period, leaving the colony where they were born as soon as they are able to swim in the sea and catch their own food. They will not return to the colony until they are at least 3 years old, when they reach breeding age, and will continue to do so throughout their life. Non-breeding birds may be found far from their home colony, particularly in the region of the Antarctic convergence and other places of upwelling (such as oceanic sea-mounts and islands) where there are good concentrations of lanternfish and squid. King penguins become sexually mature at about six years old, with some individuals breeding successfully as early as four years old. 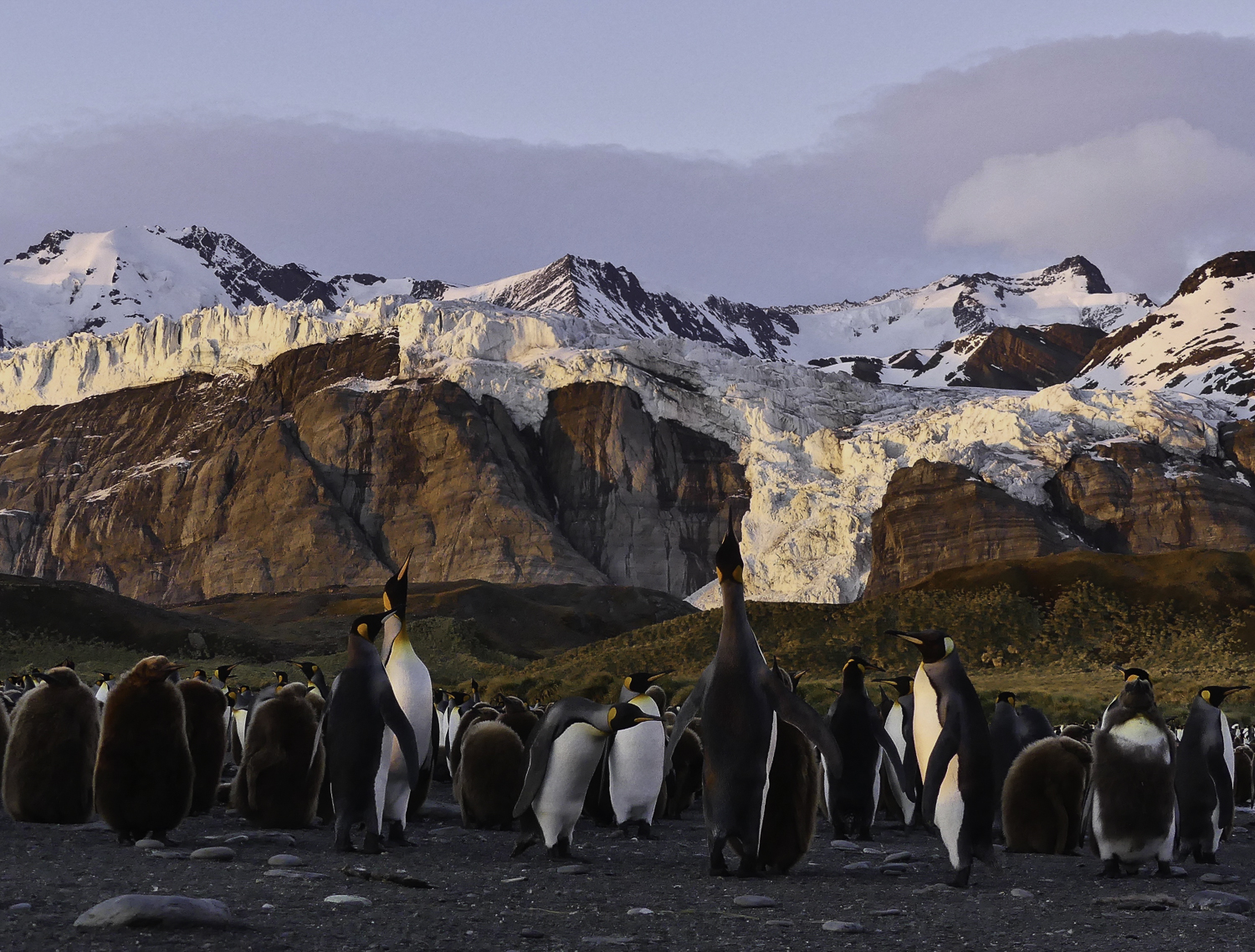 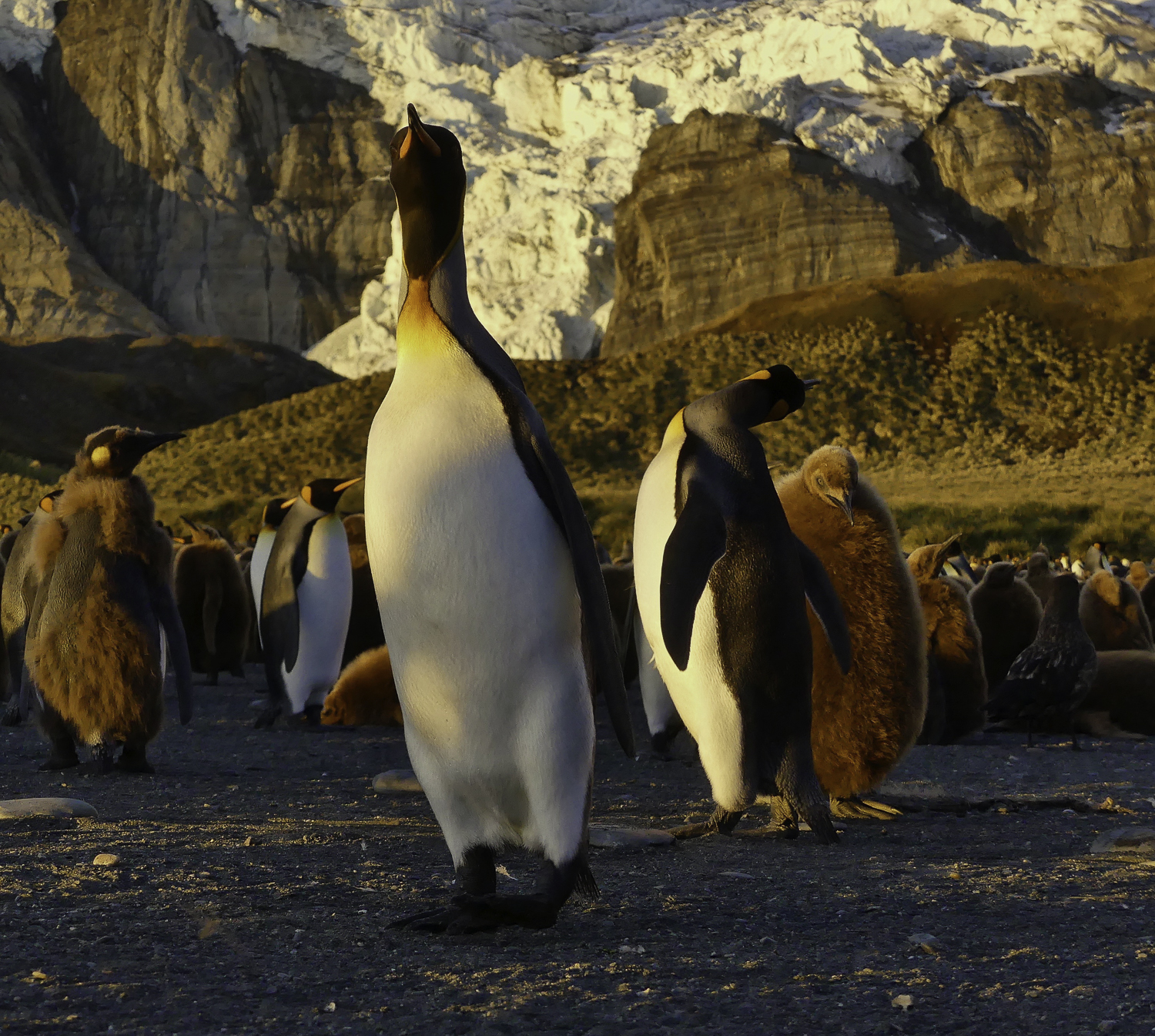 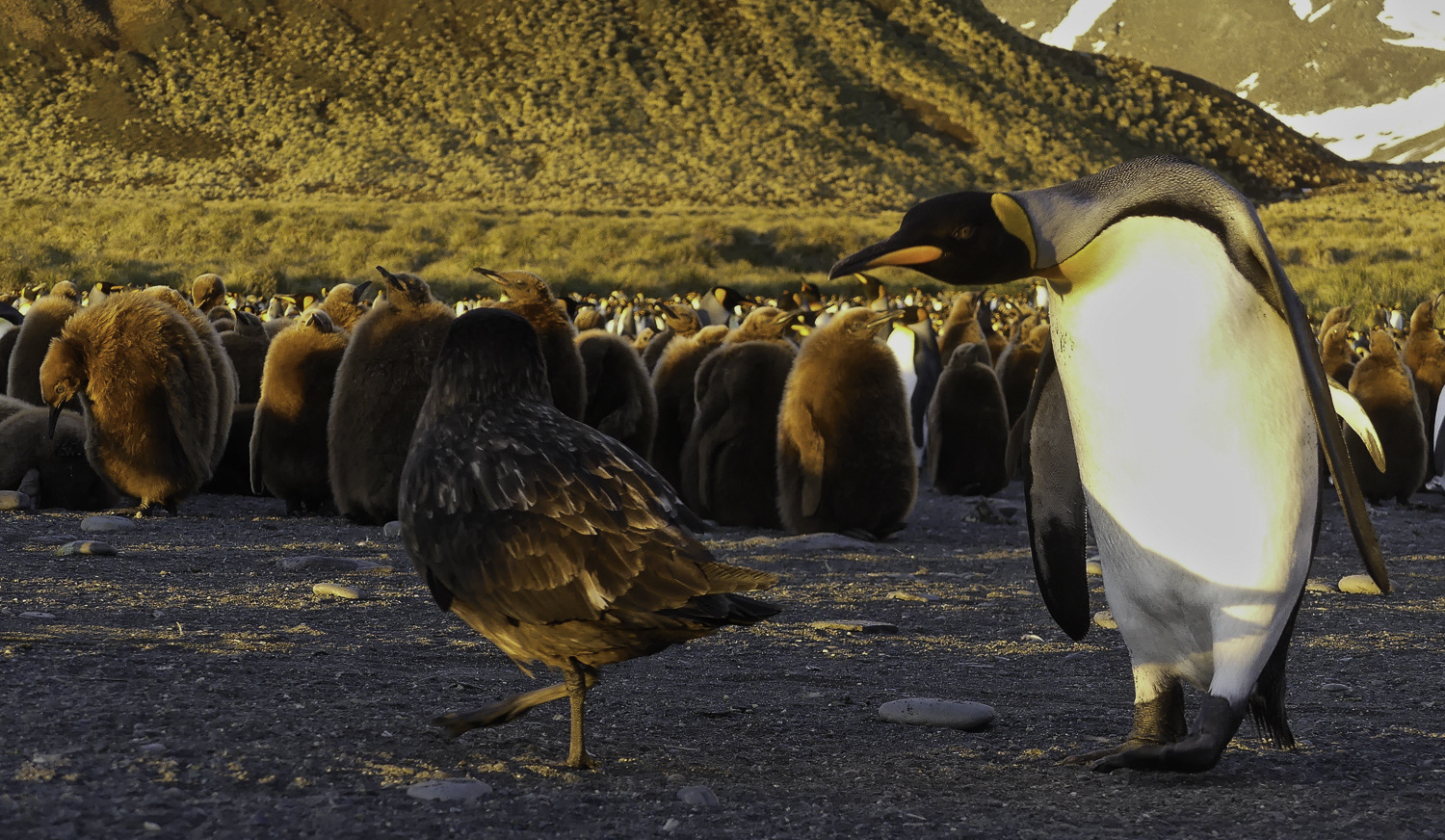