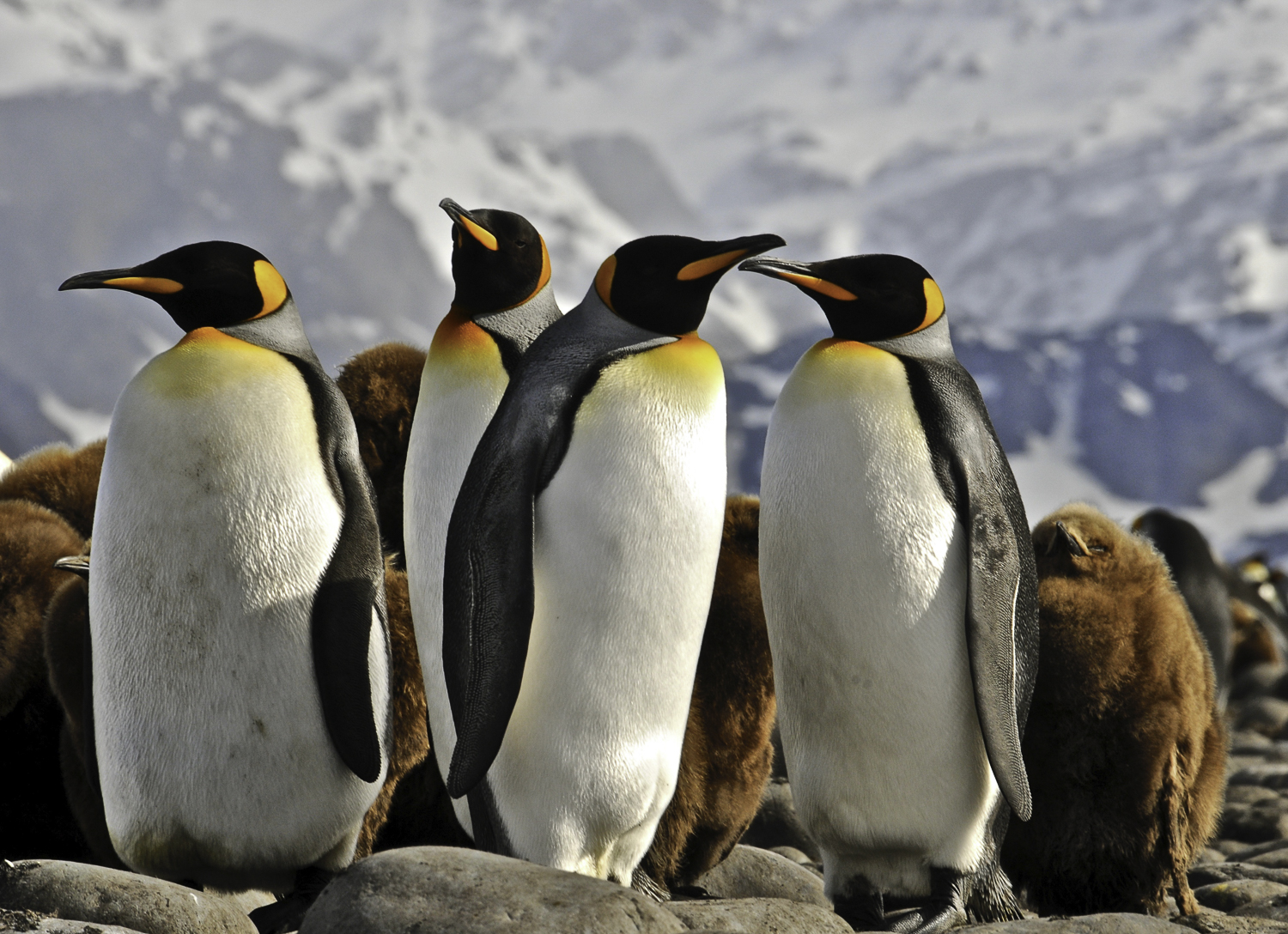 Sitting at the edge of a huge king penguin colony, I’m easily distracted by the overall visual magnificence of the scene and I forget that these penguins are telling me something about the state of their world—and I need to listen. But how do you make sense of the impacts of global climate change in the Southern Ocean when you are still discovering how incredibly complicated and interconnected marine and terrestrial ecosystems are? In the words of Dr. Dee Boersma, which I quote from her 2008 article “Penguins as Sentinels,” in the journal BioScience (https://doi.org/10.1641/B580707):

“Penguins are sentinels of the marine environment, and by observing and studying them, researchers can learn about the rate and nature of changes occurring in the southern oceans. As ocean samplers, penguins provide insights into patterns of regional ocean productivity and long-term climate variation. “

To varying degrees, penguin populations throughout the Southern Hemisphere are in decline. Over the past two decades penguin researchers have focused their efforts on trying to understand the multiple factors driving these declines, and most of the research points to the rapid changes occurring in marine environments worldwide. Quintessential “wildlife-rich oases” like South Georgia and the Crozet Island Archipelago (southern Indian Ocean) are by no means immune to these impacts. Multiple research studies have documented the role that climatic variability and extreme weather events have played in undermining the resilience of many penguin species in adapting to ongoing climate change, reduced marine productivity and significant range shifts in the prey species they depend on. A severe storm event, especially during the winter months when king penguin chicks (still in their brown down coats) huddle tightly together in their crèches until the parents return with food, sets the stage for chick death due to starvation and hypothermia. Reduced reproductive success (egg-laying and chick rearing) and higher mortality rates for both adult and juvenile penguins will determine the future for most penguin species.

Overwintering in the Crèche:

Unlike the chicks of other penguin species, kings stay in their colonies until the following spring. Wearing only their downy brown coat, the chicks must survive much colder and more severe conditions than their parents experience at sea (in their well-insulated and waterproofed adult plumage), where the temperature is not much below freezing. Clearly, safety in numbers provides some protection from predators and the advantage of being warm and snug with your fellow mates provides a survival edge. Crèching behavior in king penguins appears to be a strategy that protects chicks from adult aggression, predation and severe weather. Crèches serve as “nursery shelters” for chicks, with group size increasing early in the winter and decreasing as the austral winter progresses. Position within the crèche matters (near the center is preferred) and there is intense competition among chicks for access to the center. Lone chicks suffer the most aggression from unrelated adults, and aggression appears to encourage chicks to “join” a crèche. Chicks at the periphery of a crèche are vulnerable to predators and appear to be more situationally vigilant. Chicks in poor condition are often attacked and pushed to the periphery of the crèche, where they become easy prey for skuas and giant petrels. During harsh weather conditions, chicks form larger crèches, tolerate closer positioning within the group, and turn their backs to the wind and rain.

On our early-October trip to South Georgia in 2009, expecting “normal” chick survivorship after an “average winter,” we were stunned and disquieted by the numbers of dead chicks we saw as we looked across the king penguin colony at St. Andrews Bay. Some researchers have suggested that winter starvation may claim the lives of 50% of king penguin chicks. Sadly, this seemed to be one of those “50% chick mortality” years. Look closely at photo #2 and you will see numerous dead chicks in between relatively small crèches of healthy appearing chicks. My guess is that the chicks died of starvation on their original gravel nest and, for whatever reason, had not been part of a crèche or were too weak to remain with other chicks. In photo #3 you see several snowy sheathbills scavenging the remains. Photo #4 shows a probable penguin parent and its chick begging for food, while a clearly starving chick turns away to await a parent that may never return. The last photo is from the 2018 trip (late November) and shows a well-progressed molt from down plumage to black and white perfection. 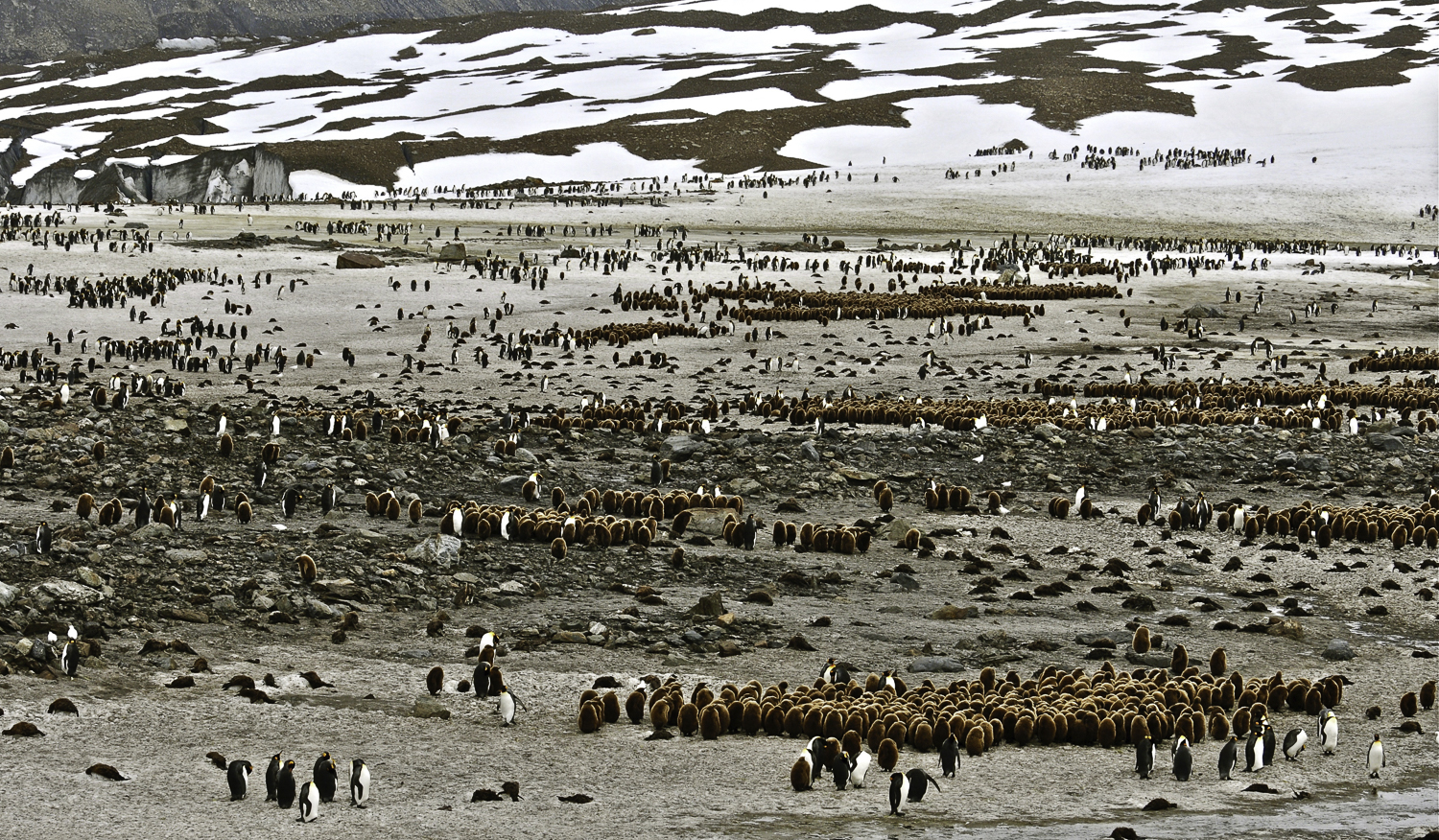 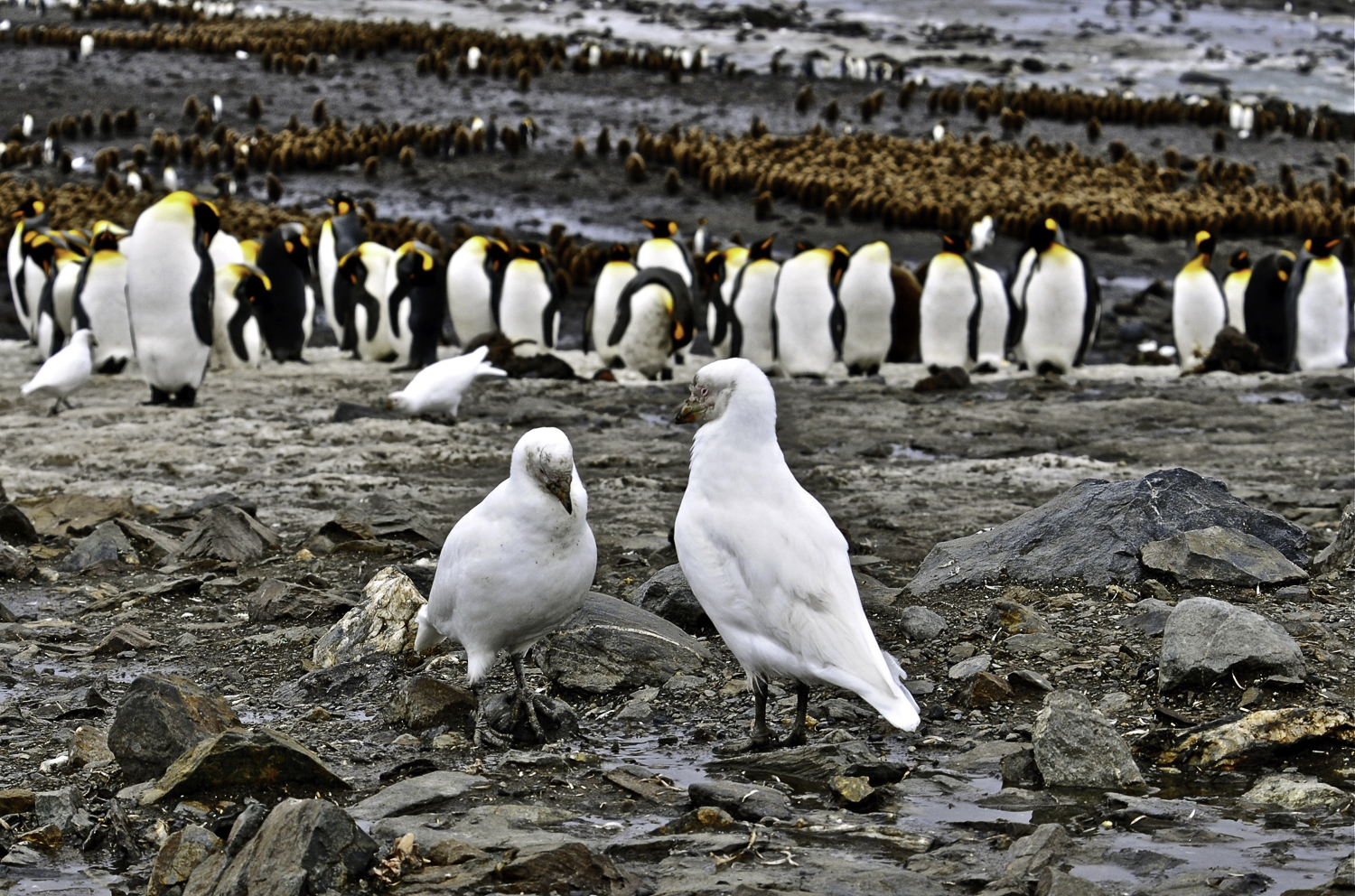 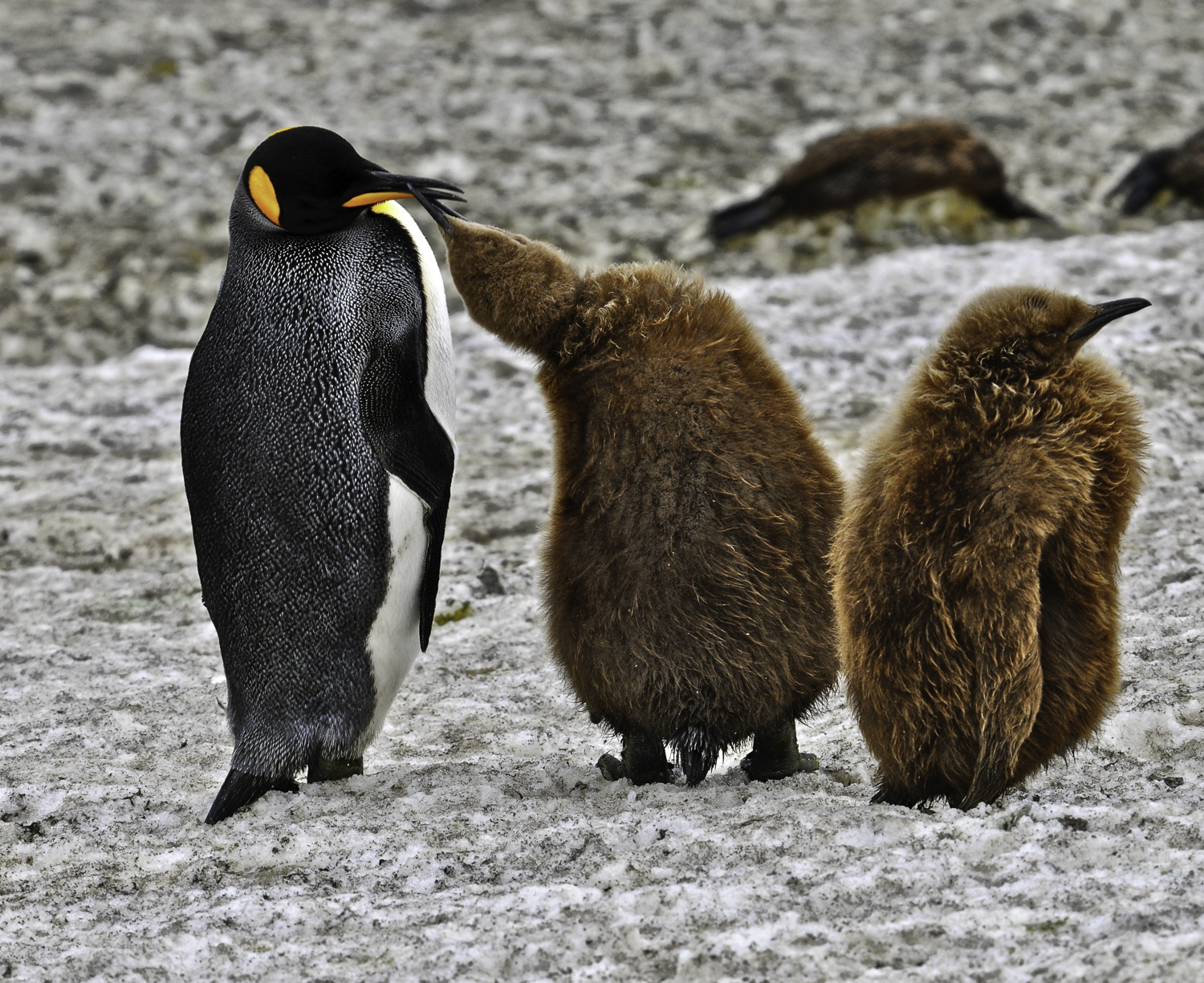 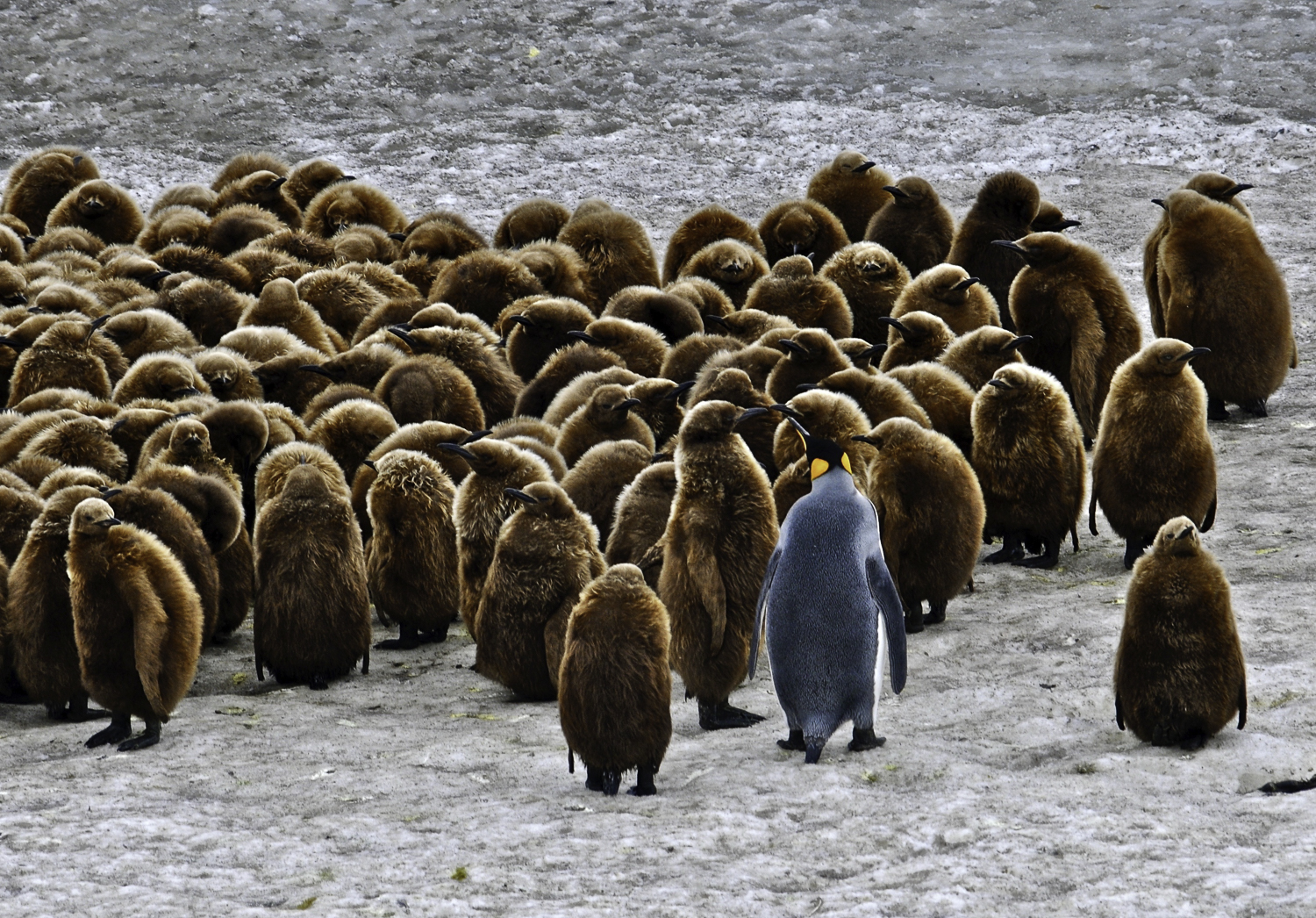