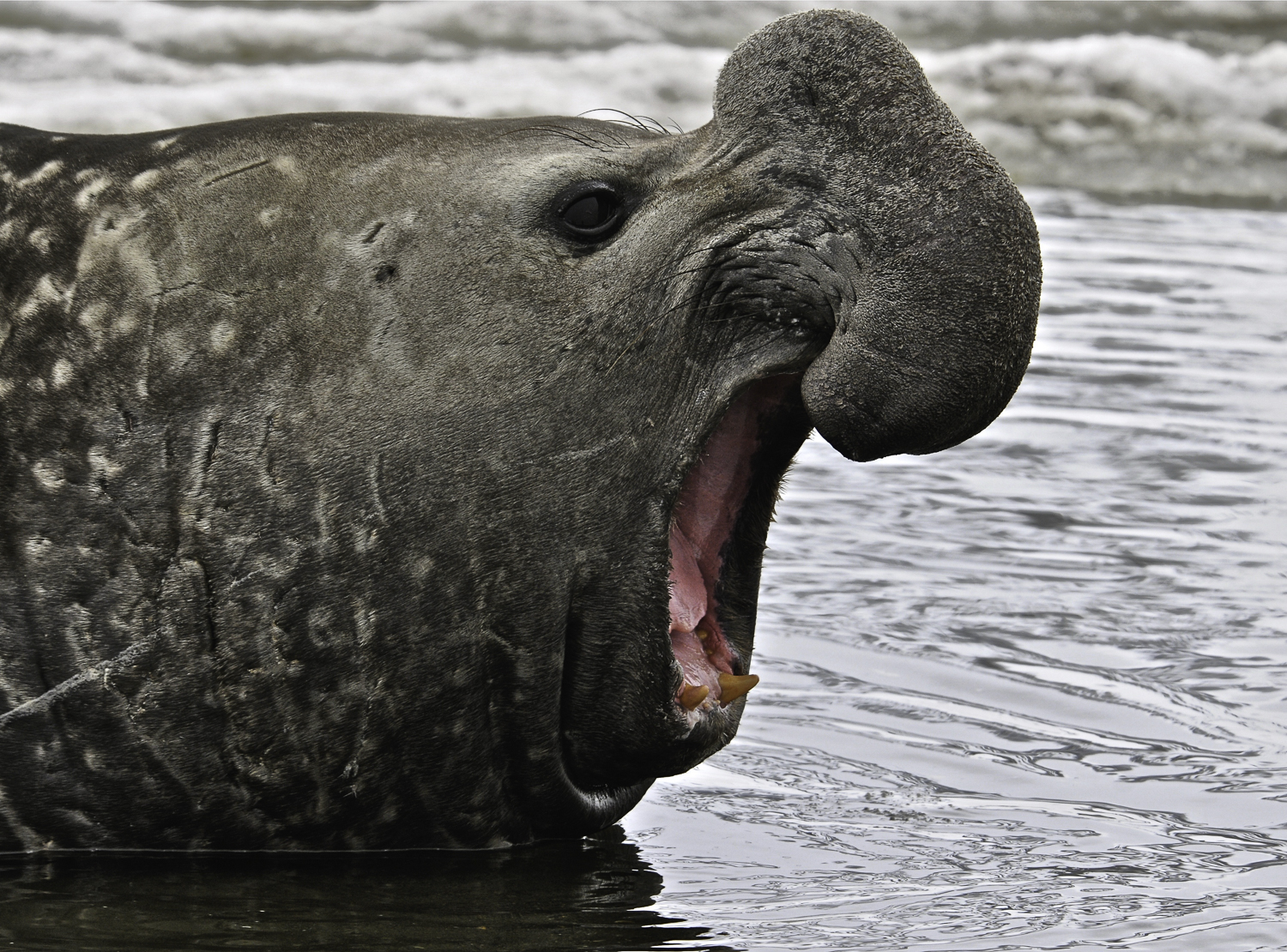 The realm of the southern elephant seal encompasses the entire Southern Ocean. These massive pinnipeds, sometimes nicknamed “sea elephants,” are named for the male’s trunk-like inflatable snout (proboscis). Southern elephant seals have a circumpolar distribution in the Southern Hemisphere and there are four genetically distinct populations: South Georgia, Peninsula Valdés (Argentina), Isles Kerguelen and Heard Island, and Macquarie Island (Australian). These seals are legendary travelers of the high seas and divers extraordinaire—dedicated open ocean predators that spend as much as 10 months of the year at sea, traveling thousands of miles on foraging migrations. Both sexes come ashore only to breed and to molt their coat (skin and fur). While at sea, elephant seals rest by floating at the surface and feed by diving to significant depths in search of large fishes and squids.

Southern elephant seals are the largest seal species in the world, and those that call South Georgia “home” are the largest of all. Biologists suggest that the size of males (bulls) is an adaptation that helps them aggressively defend their breeding territories and keep other bulls away from their huge harems of females (cows), to which they have sole mating rights. Consider the stunning fact that the majority of South Georgia’s dominant breeding bulls (or beach masters) are nearly 20 feet long and tip the scales at over 8,000 pounds, which is more than five times the size of breeding-age females—the greatest weight disparity between sexes of any mammal. Watching an enormous bull charge down the beach at high speed, its body rippling with fat and power, convinced me that nothing—not panicking female seals, yelping pups or any other hapless obstacle in their path (including humans)—would stop a bull when its tunnel vision focused on a territorial rival. Much like their penguin neighbors on the breeding beaches, southern elephant seals are superb ecosystem sentinels because their circumpolar distribution, extensive migrations and foraging behaviors, and population trends reflect the prevailing environmental conditions across a broad range of marine habitats.

Seen sprawled on a beach, the avoirdupois of a bull belies the tremendous power and graceful prowess that defines their lives in the months they spend at sea, swimming, diving and catching prey. The female’s streamlined, torpedo-like body shape seems intuitively a better design, albeit on a smaller scale. The diving ability of elephant seals is truly extraordinary and outside the breeding season they spend 90% of their time submerged, routinely diving to depths of 3,000 feet and more and staying down for as long as 2 hours. Most dives are about 30 minutes in duration and to depths ranging between 1,000 and 3,000 feet. Elephant seals can dive constantly while at sea, spending about 2 minutes on the surface between dives. They are able to accomplish these incredible feats because they have evolved some unique physiological adaptations that help them conserve energy. It may surprise you that southern elephant seals exceed even most cetaceans (whales, dolphins, and porpoises) in their ability to increase oxygen storage and reduce oxygen consumption. The simple fact that they can take in a breath at the surface and make that oxygen last for up to 2 hours is totally amazing!

How do they do it? The enormous volume of blood in their bodies stores oxygen, which they use very efficiently. They even have extra spaces (called sinuses) in their abdomens to store extra blood. Haemoglobin in red blood cells carries oxygen, and elephant seals have a lot more red blood cells per unit of blood than other animals. Their red blood cells may, as an adaptation for diving, contain more hemoglobin than normal. These extra red blood cells make elephant seals’ blood very thick. Their muscles are also used to store oxygen. Molecules of oxygen-carrying myoglobin are present in the muscles and give the tissues a black color. Isn’t evolution fascinating? Researchers have been using miniaturized satellite tracking loggers to learn more about the duration, depth and sequenced dive pattern that southern elephant seals use in hunting their prey—squid and fish—at depths of 1,300 to 3,300 feet. Based on these studies, we now know that elephant seals are the deepest diving, air-breathing marine mammal in the world, with a record-breaking maximum diving depth of 7,835 feet. Our next ePostcard will take you on a virtual dive and you’ll learn why southern elephant seals are such extraordinary ecosystem sentinels! 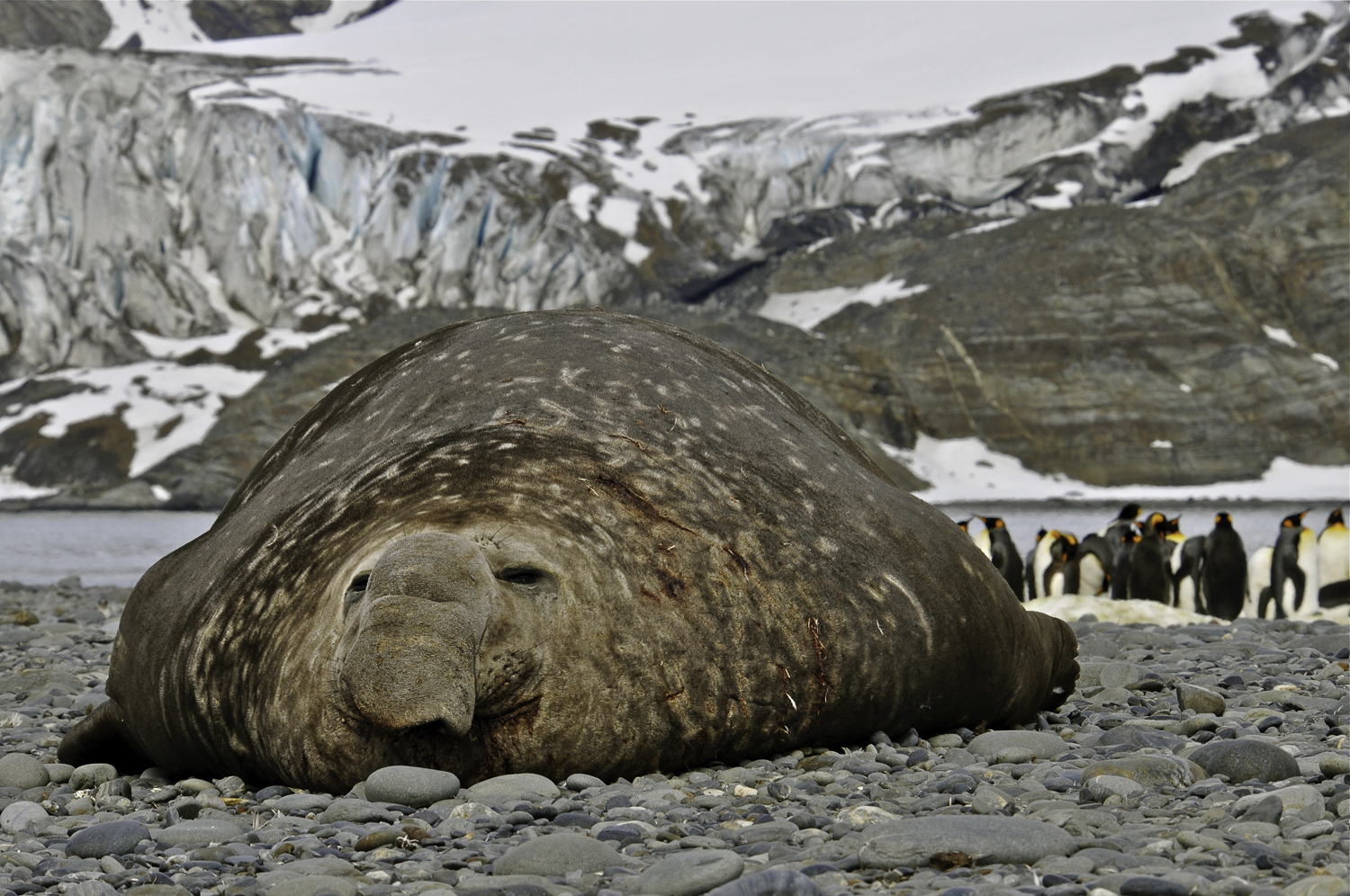 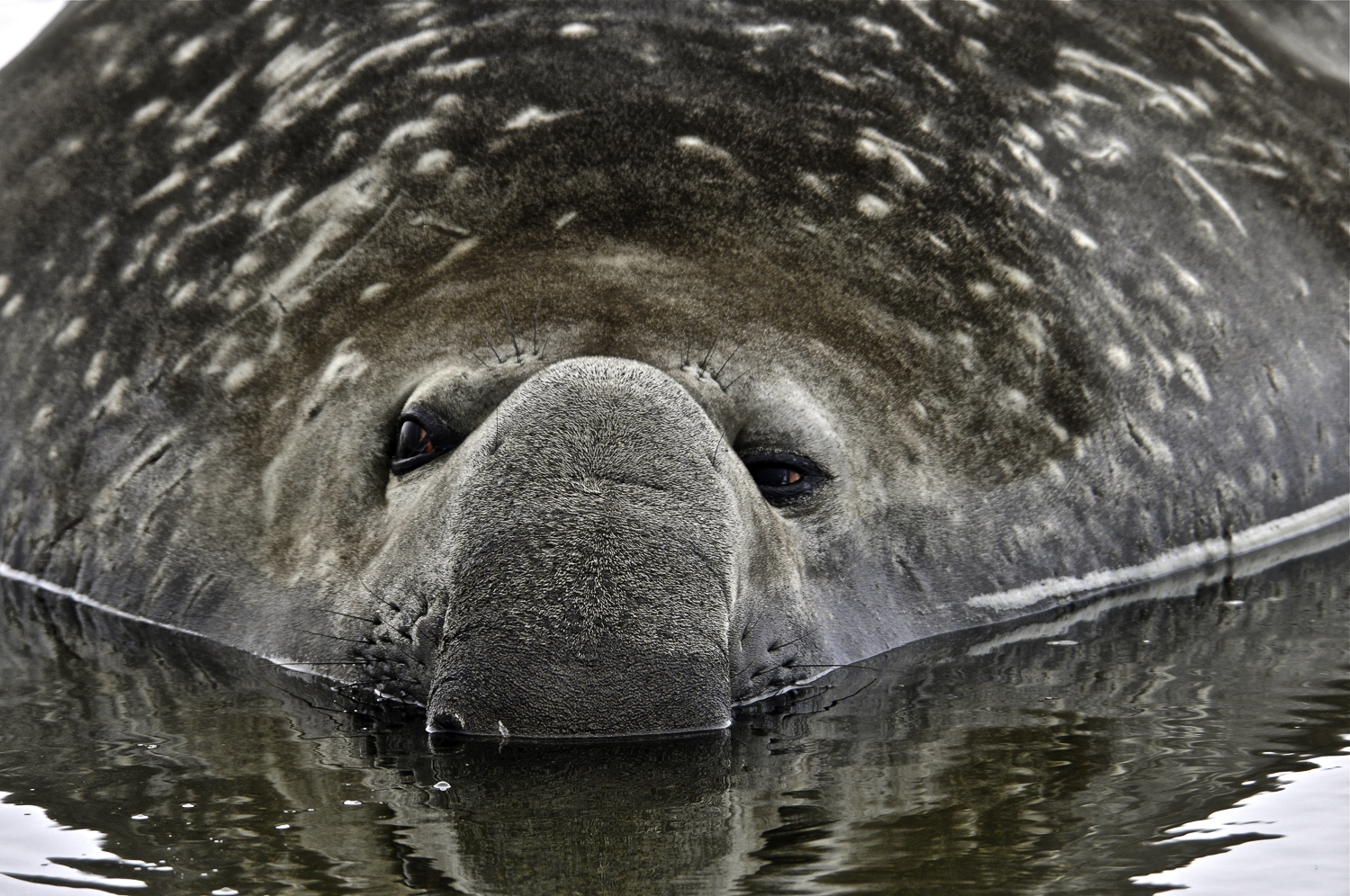 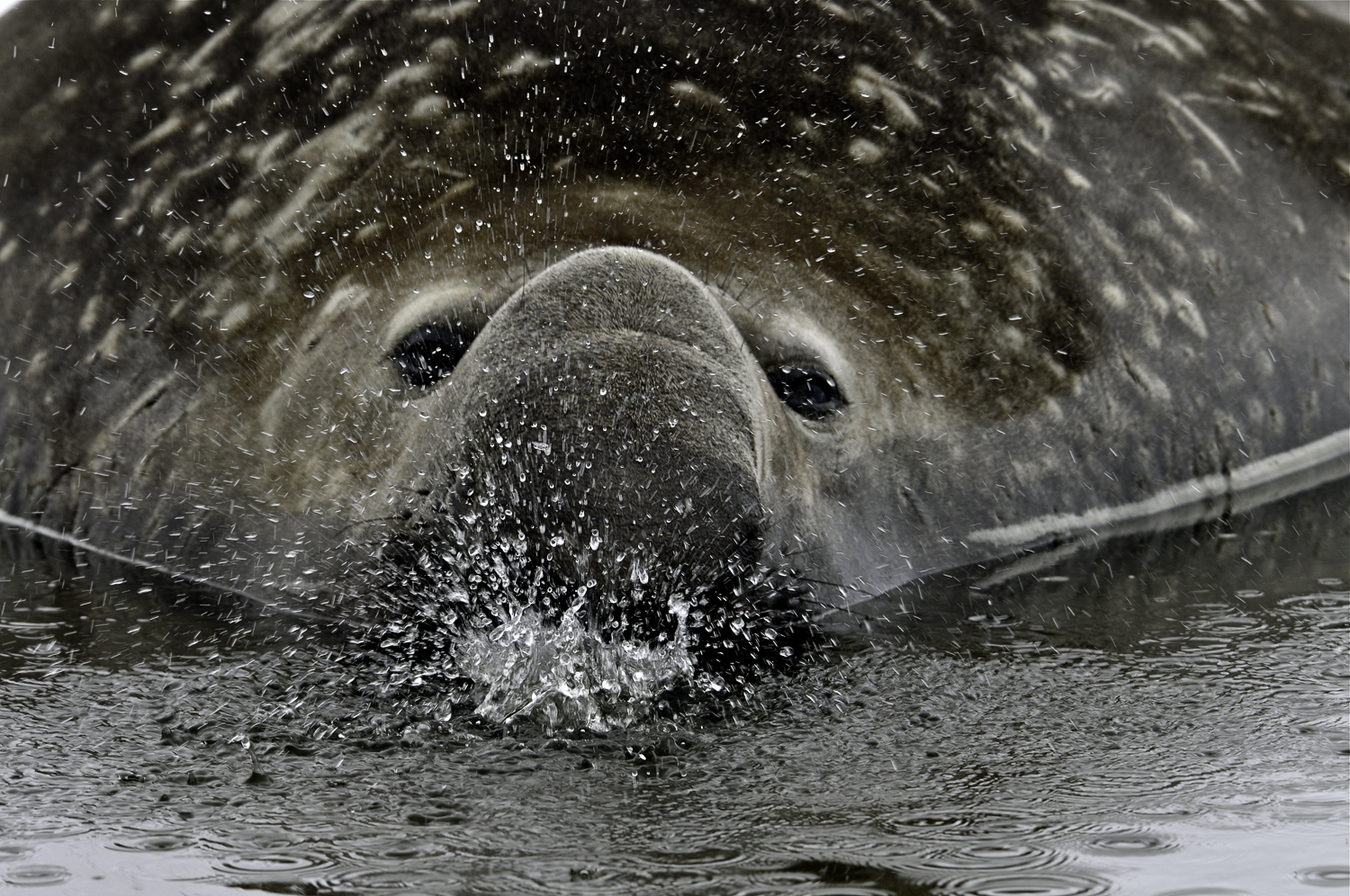