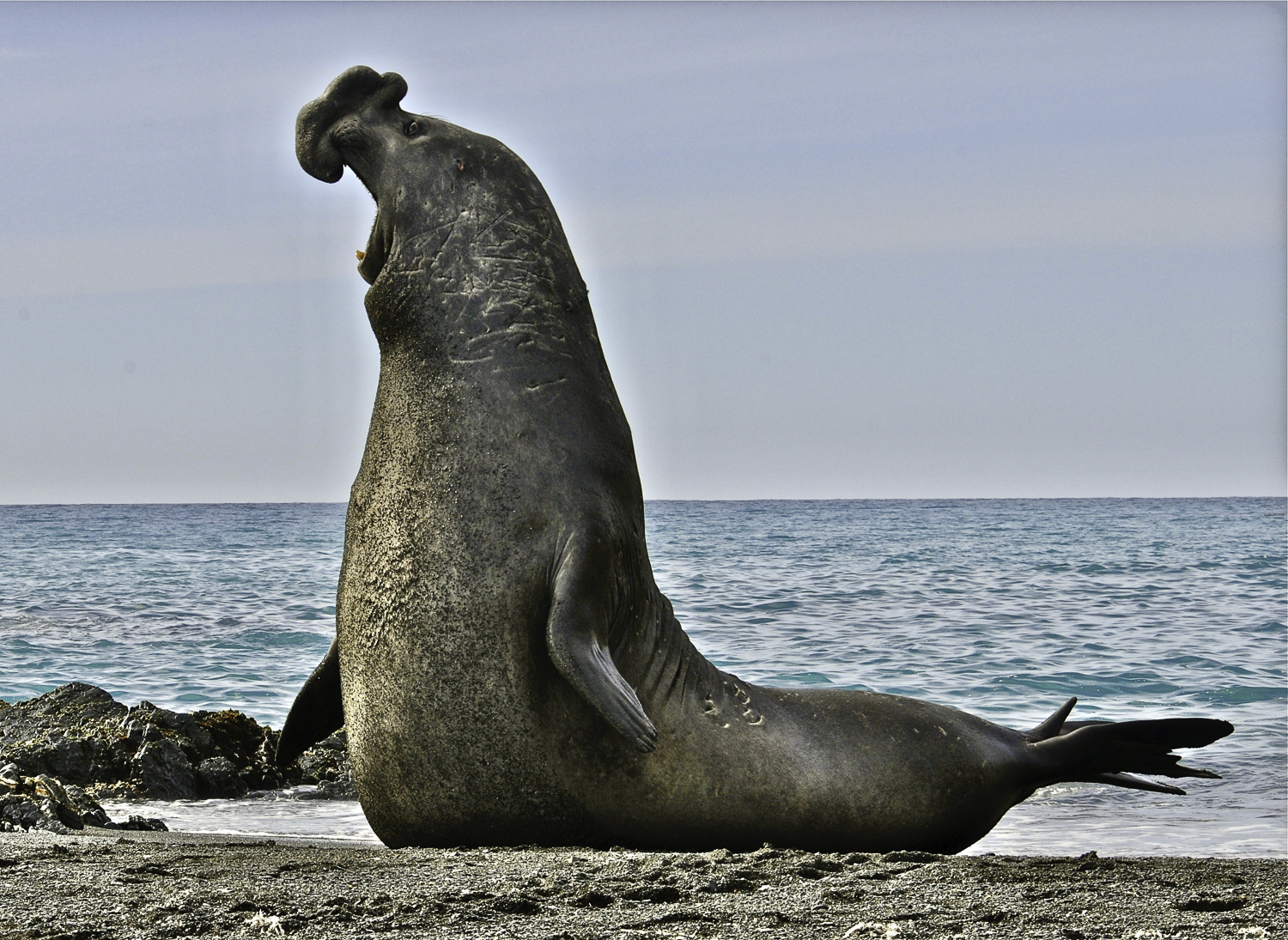 Before we begin satellite-tracking southern elephant seals on their epic migrations in the Southern Ocean we need a bit of Oceanography 101 and a good map (#2 below) to guide us on our virtual expedition. There is only one “world ocean,” the Global Ocean, the vast interconnected body of water that covers 71% of the Earth’s surface. The Global Ocean is geographically divided into 5 named ocean basins: the Atlantic, Pacific, Indian, Arctic and Southern. The “boundaries” between these ocean basins have evolved over time for a variety of historical, cultural, geographical, and scientific reasons. The Southern Ocean begins south of 60° S latitude and encircles the continent of Antarctica. Geologically speaking, it is the youngest of the ocean basins and was formed when Antarctica and South America moved apart, opening the Drake Passage, roughly 30 million years ago. Many of you have experienced the memorable high seas of the Drake Passage on the bow of a ship watching the horizon—or were you focused on the albatrosses riding the winds?

Many millions of years ago, the separation of South America and Antarctica as a result of continental drift and the subsequent birth of the infamous West Wind Drift, those fierce  westerly winds fueled by the vast expanse of uninterrupted ocean, gave rise to the east-flowing Antarctic Circumpolar Current (ACC), one of the world’s greatest geographic wonders. The volumetric dimensions of this massive current extend from the sea surface to depths ranging from 6,000 to 12,000 feet, and its maximum width is nearly 1,200 miles in certain areas. Because the ACC circles the globe in a clockwise (easterly) direction, it provides the unifying link to the other 4 ocean basins and plays a critical role in regulating the climate of our planet. Scientists predict that as rapid climate change increasingly impacts the Southern Ocean, the ACC will act as a conduit to transmit these changes around the globe.

Associated with the Antarctic Circumpolar Current is a mixing zone known as the Antarctic Convergence, where cold northward-flowing Antarctic waters meet the relatively warmer waters of the subantarctic. The colder Antarctic waters mostly sink beneath the subantarctic waters, and this upwelling-driven “mixmaster effect” creates a zone very high in nutrients. These nutrients nurture “blooms” of phytoplankton (think chlorophyll), which attract swarms of copepods and Antarctic krill, and lay the groundwork for the food chains that support fish, whales, seals, penguins, albatrosses and a wealth of other species.

There is increasing evidence and concern that Southern Ocean ecosystems are facing globally significant challenges, especially in regions undergoing some of the fastest rates of warming on Earth, and where industrial-scale commercial fishing may be impacting ecosystem processes. Modern tracking technology enabled University of Tasmania’s Institute for Marine and Antarctic Studies (IMAS) researchers Dr. Mark Hindell and Dr. Clive McMahon and their colleagues from eight countries to “travel” with the southern elephant seals on their annual foraging migrations. This six year project was part of the International Polar Year Program’s Marine Mammals Exploring the Oceans Pole to Pole (MEOP). The researchers tracked 287 male and female elephant seals from eight major breeding sites (65 from South Georgia) across the Southern Ocean, from Macquarie Island south of Australia to subantarctic islands, such as South Georgia and the Kerguelen Islands. The seals were sedated just long enough to allow researchers to attach (glue) satellite-linked, logging sensors to the top of their heads (the sensor falls off when the seal molts). Photo #3 (Courtesy of Dr. Clive McMahon). The logging device is battery powered, waterproof-housed in solid epoxy, and has an antenna and PC interface for recording (via satellite). The recorded data set includes GPS location, behavioral and physical oceanographic data (i.e. pressure, wet/dry immersion, salinity, and temperature).

The study showed that the overall southern elephant seal population had increased slightly to some 750,000 since the last review in 2005, but that a long-term population decline continues at Macquarie Island and probably correlates with an increase in sea ice, which prevents seals from accessing productive foraging areas. We now know that southern elephant seals spend more than 10-months of the year foraging at sea before returning to their breeding sites, with the longest migration route recorded during the study a remarkable 3,406 miles. The researchers recorded individuals diving for up to 94-minutes and to a maximum depth of 7,838 feet.

According to the study’s lead author, Dr. Hindell: “For the first time, biologists can now monitor oceanographic conditions simultaneously with animal behavior, giving an integrated picture of the physical structure of the ocean and how it affects elephant seal activity. Elephant seals dive almost continuously while at sea and therefore provide valuable high-resolution information on the ocean attributes of the water column, such as temperature and salinity, wherever they travel. It’s almost as if we had 287 mini-submarines exploring the Southern Ocean, providing new insights into remote and previously inaccessible locations while revealing where seals forage and how they respond in different environmental conditions. This has only been made possible by a major global research collaboration that brought together a broad data set of physical observations, including information on more than one million individual elephant seal dives in 568,000 different locations.” Co-author, Dr Clive McMahon, notes that “female southern elephant seals rely on the energy stored during their foraging trip to raise their pups, and their foraging success affects both their pup’s size at birth and its survival chances in the first years of life. This early investment period has broad consequences at the population level so that survival during the juvenile phase is an important determinant of population growth rates.”

While Antarctic continental shelf waters can be regarded as prime habitat for both sexes, tracking data indicated that individual seals use different regions of the Southern Ocean, ranging from waters north of the subantarctic Front to the continental shelf of the Antarctic Continent.The elephant seal population breeding on South Georgia, which has been stable for many decades, used both the Southern Atlantic and the Antarctic Peninsula shelf area for foraging, perhaps because the peninsula is relatively close to South Georgia. The seals used this particular shelf habitat more and for longer than any other region, even when sea ice formed during winter. In the ocean, the seals apparently live alone. Most females dive in the upper layers of the ocean for foraging, while males forage in both the upper layers and deeper benthic zones. Individuals will return annually to the same foraging areas. While hunting in the dark depths, elephant seals seem to locate their prey, at least in part, using vision, and the bioluminescence of some of their prey species helps with their capture. Elephant seals do not have a developed system of echolocation like cetaceans do, but their facial whiskers (vibrissae) are sensitive to vibrations and appear to play a role in locating food.

Map Credit: Lyubomir Ivanov. This file is licensed under the Creative Commons Attribution-Share Alike 3.0 at https://commons.wikimedia.org/wiki/File:Antarctic-Overview-Map.tif 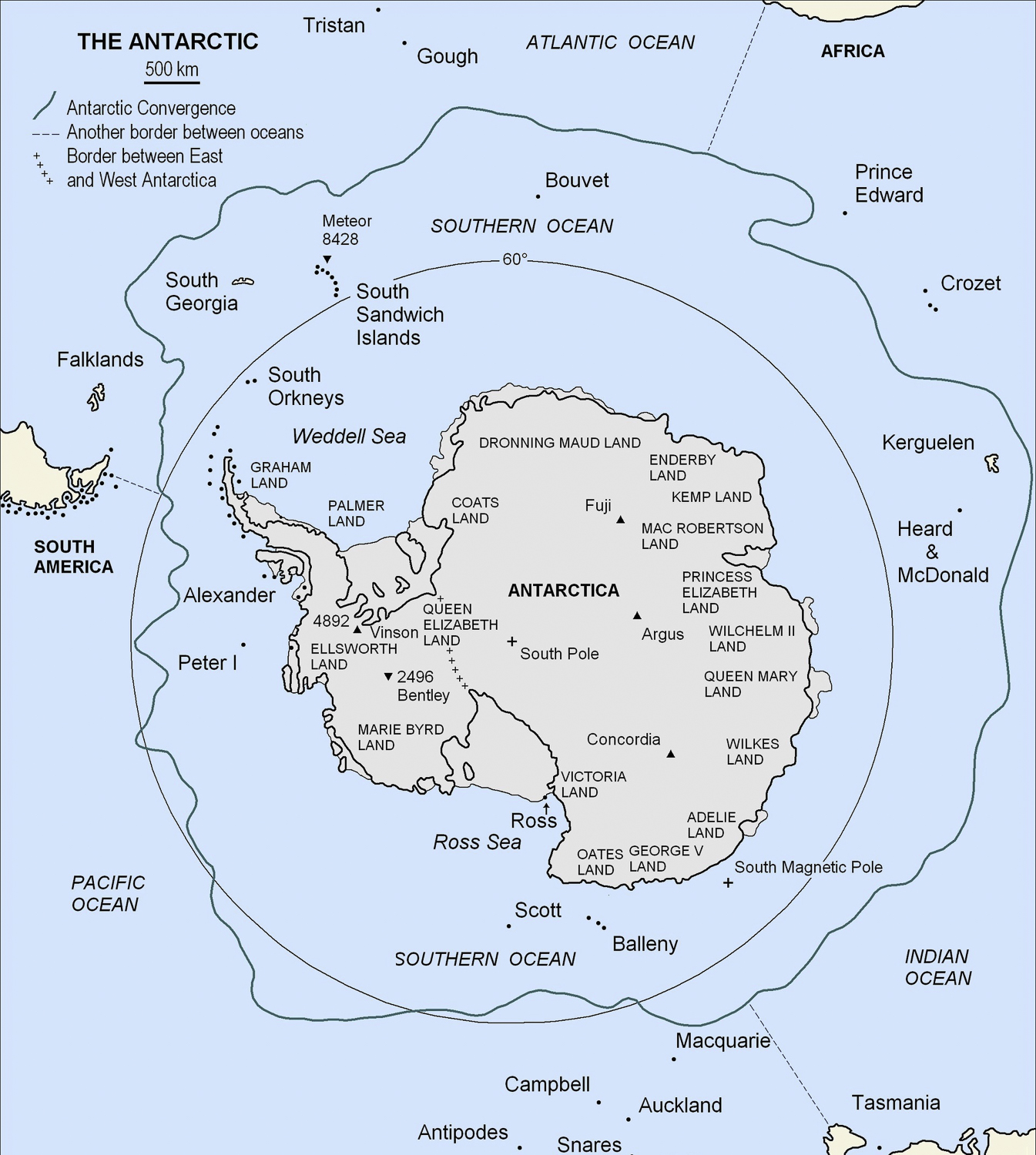 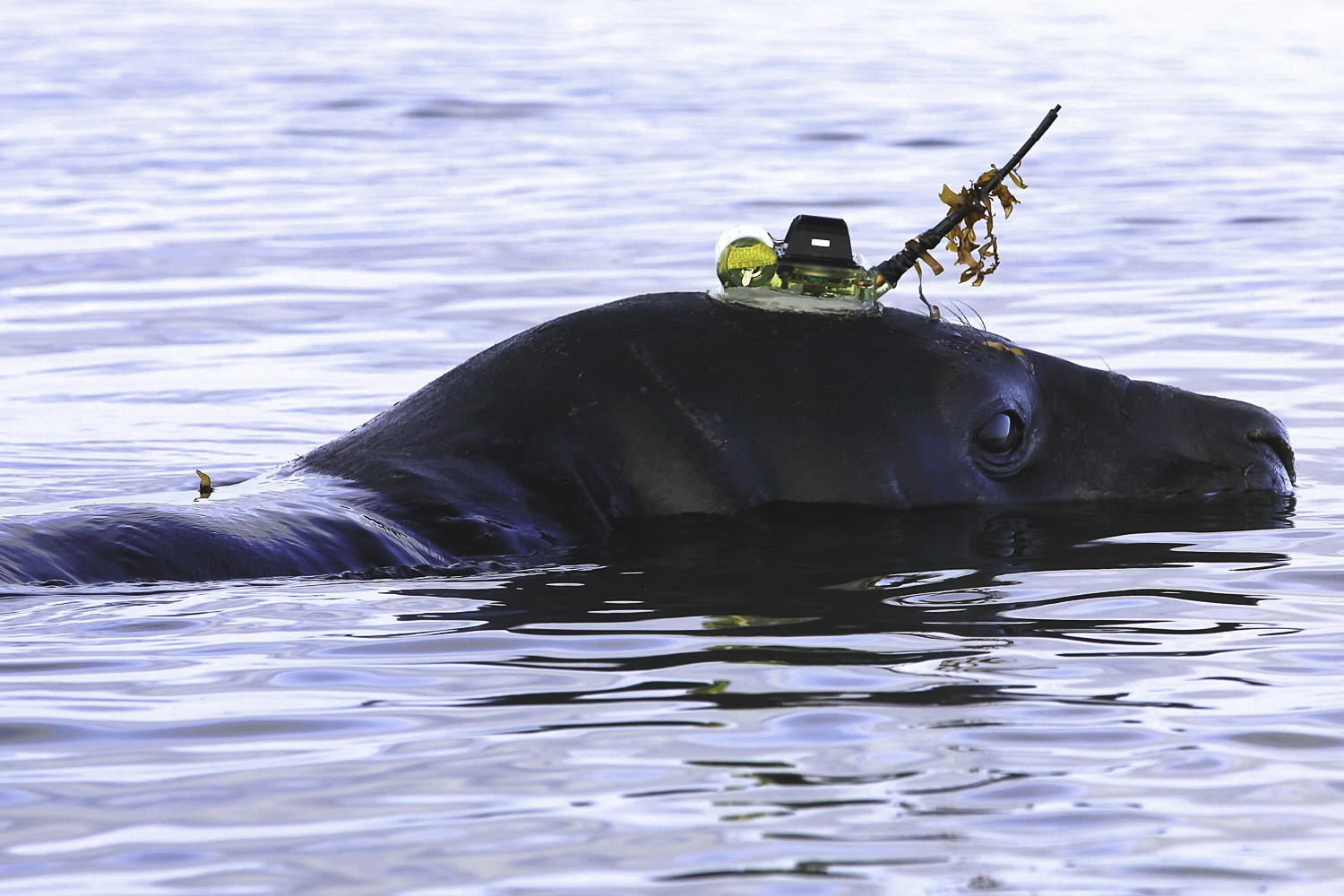 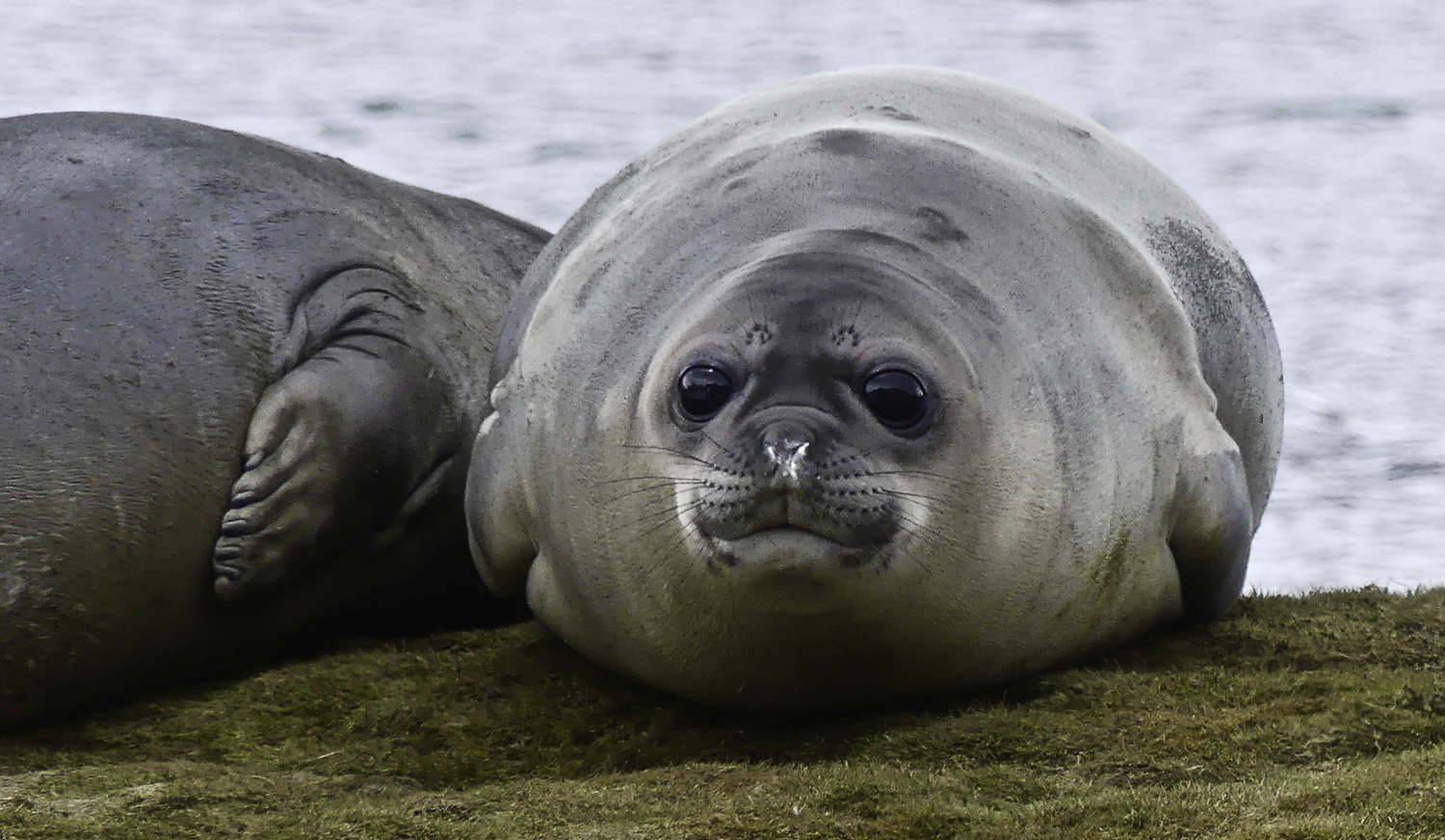 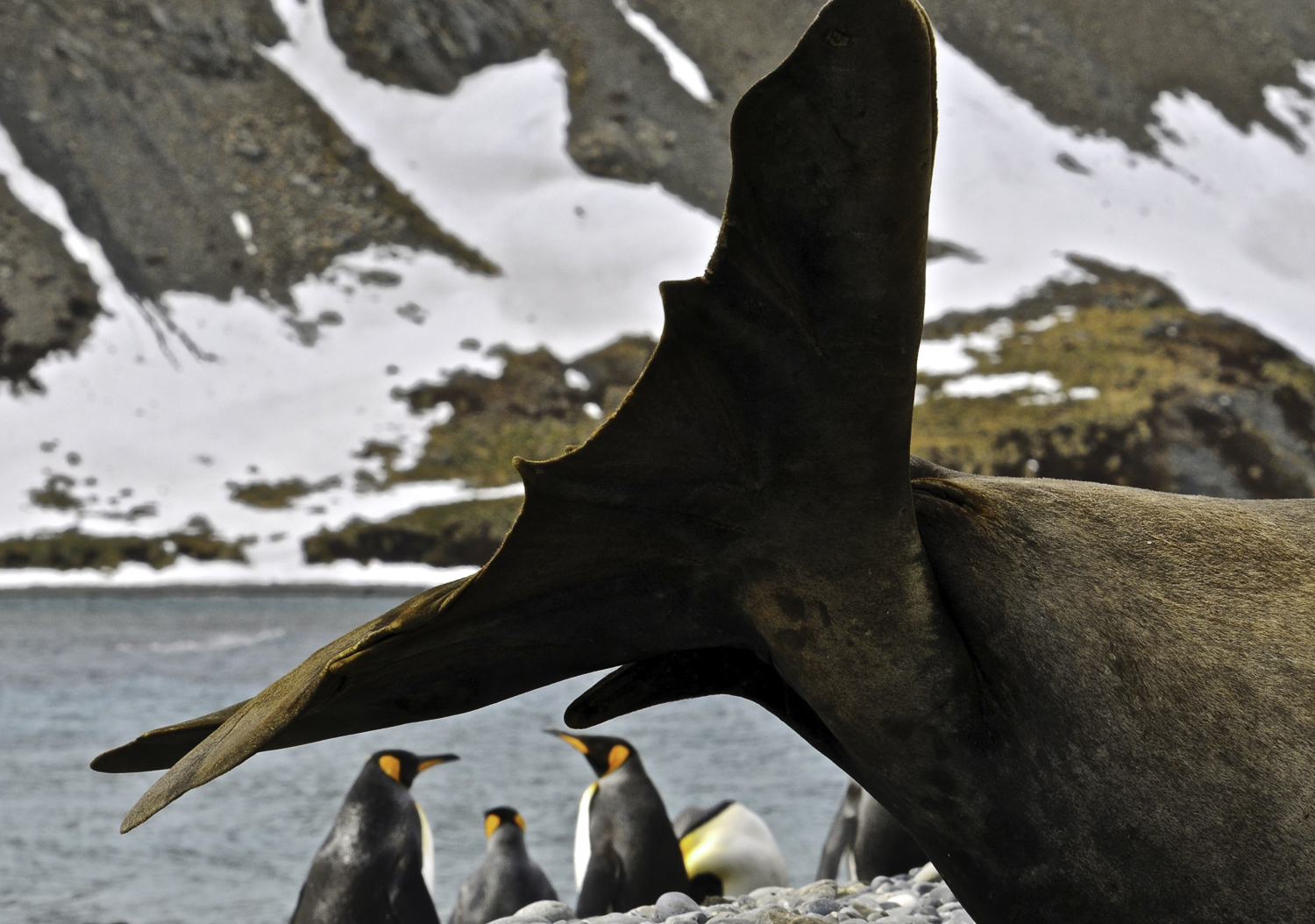 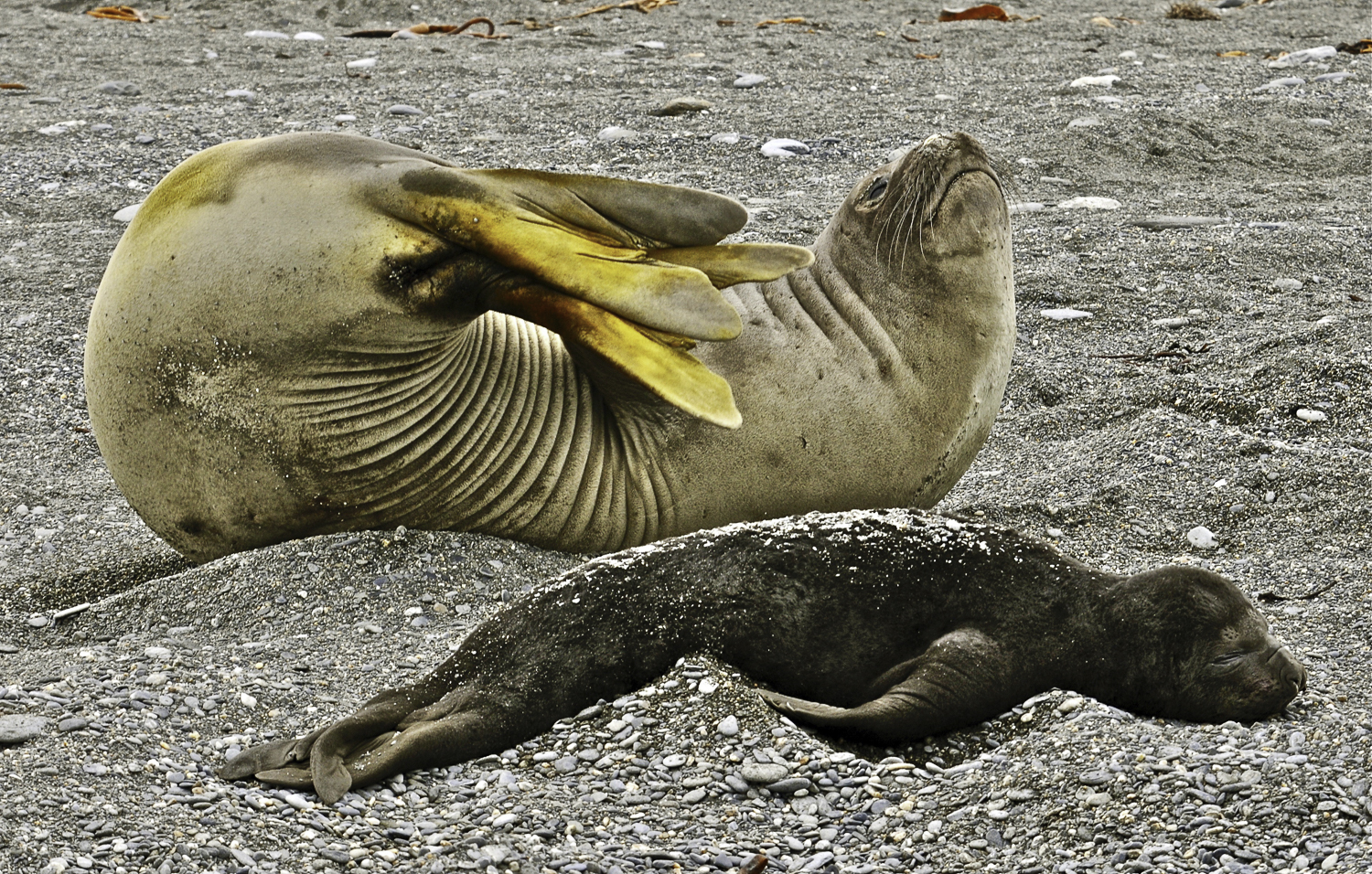