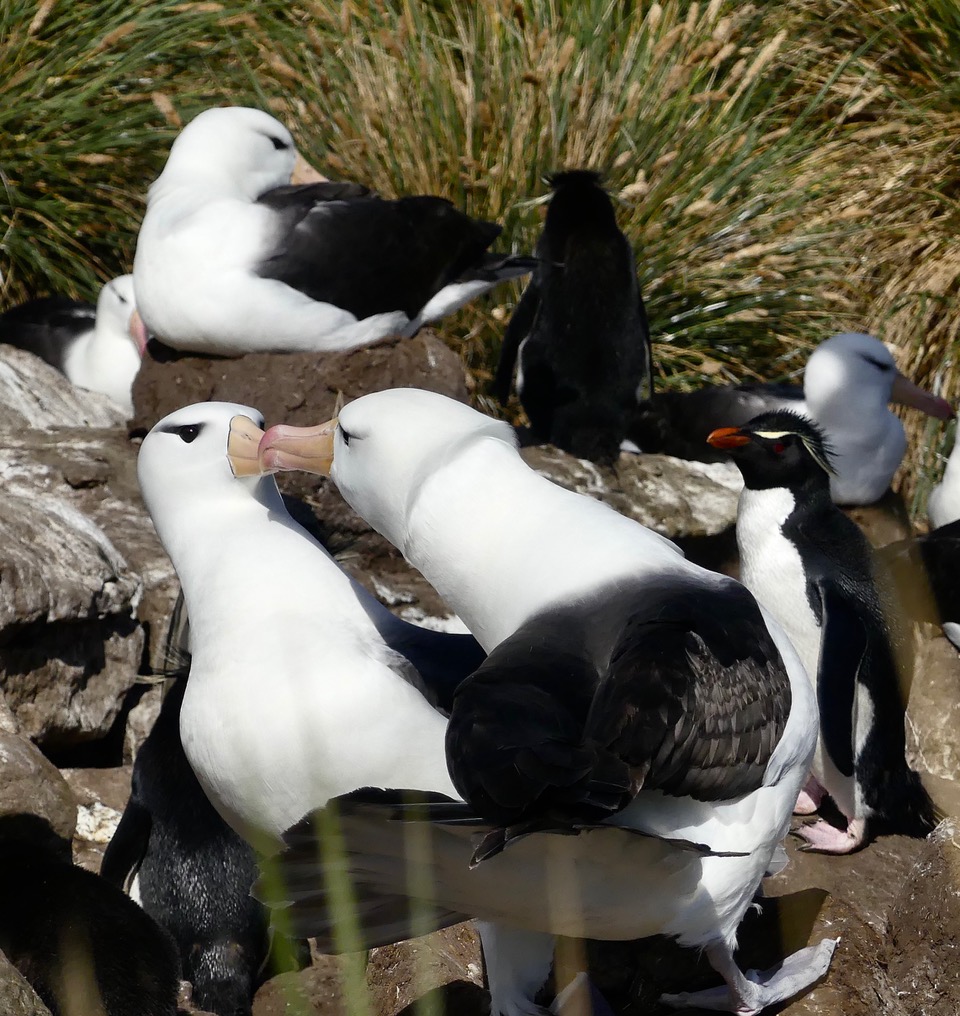 We celebrate the wonder of black-browed albatrosses with our final two ePostcards from the Falklands/Malvinas. Before we go, however, we must preen our own “feathers” for the long flight to the southern tip of South America—Tierra del Fuego. Among seabirds, albatrosses are renowned for their complexly beautiful and ritualized courtship and pair-bonding displays. These behavioral repertoires tend to be most complex in the largest and most long-lived of albatross species, such as the wandering, Laysan, and black-browed albatrosses. As you can well imagine, I’ve never met an albatross species that I didn’t fall in love with. All of my photos on these two ePostcards are from either Saunders Island or Steeple Jason Island.

Black-browed albatrosses, like all birds, perceive their environment through visual, auditory, tactile and chemical stimuli. Albatrosses are generally silent birds, but on their breeding colonies they declare their territorial claims to nesting sites by making loud “braying” or “cackling” calls, as well as a rapid series of grunting and bill-clapping sounds. Breeding pairs communicate through courtship behaviors like allo-preening and beak touching. Most albatross species are monogamous, and black-browed albatrosses often mate for life. Their breeding season begins in September or October and runs until April. A pair will often engage in rituals of feeding each other, using stereotyped postures while facing each other. Mutual preening (allo-preening) is normally directed towards the head, neck or breast feathers and is frequently performed by paired birds or those in an advanced stage of pair bond formation. Greeting and courtship behaviors often involve some distinctly sensual (to me) bill rubbing, and sometimes a swirl of “dance” steps, with tails fanned, accompanied by soft calls.

The bills of albatrosses play a distinct role in courtship and pair-bonding, and bill behaviors can vary greatly from one species to another. Bill pointing, where the male’s head is slightly higher than the female’s, may become synchronized with the extended bills of the two birds being held close, often touching each other. This is the most commonly observed behavior, and is often used as a greeting or as the prelude to more intense activity. Bill touching is the only mutual behavior requiring both birds to perform the same actions together. Females often respond to bill touching with a snapping sound, which is viewed as an aggressive behavior. However, males followed bill touching with bowing, which is thought to represent appeasement. Bill “nibbling” is often observed, with either the male or female gently nibbling the side of the other’s bill. As pair-bonds develop between albatrosses, they spend less time displaying and more time sitting together “yapping” or “dueting,” which may be particularly important in strengthening the pair-bond as it could be used for individual recognition. Being able to spend several hours observing colonies of of black-browed albatrosses at the peak of the breeding season has been one of the greatest privileges of my life as a naturalist. 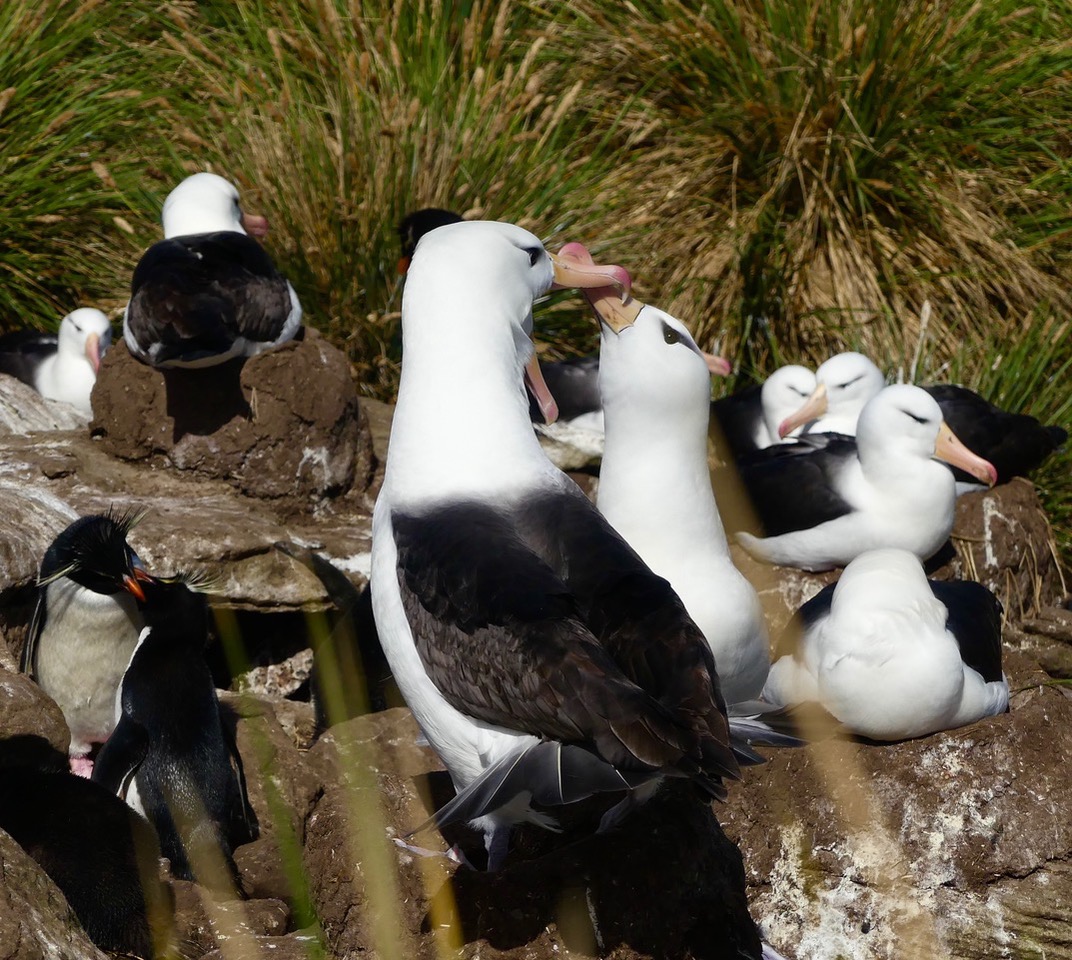 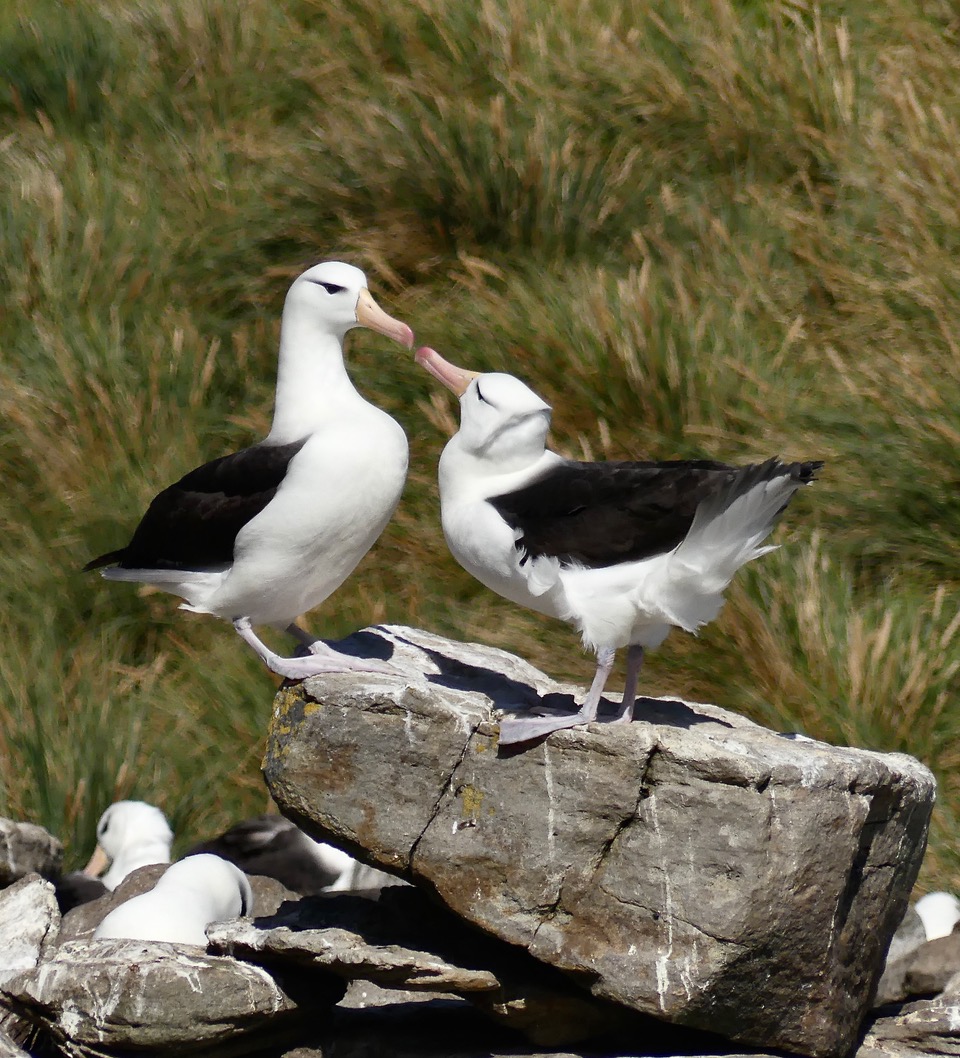 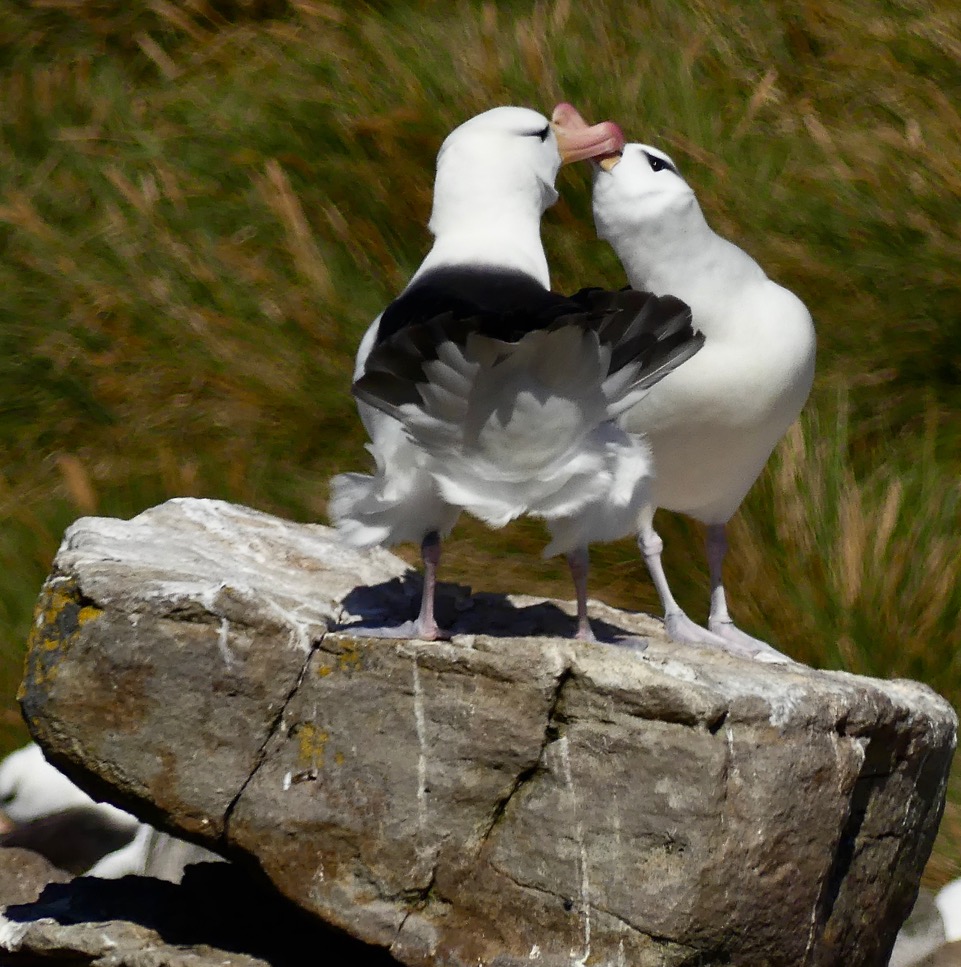 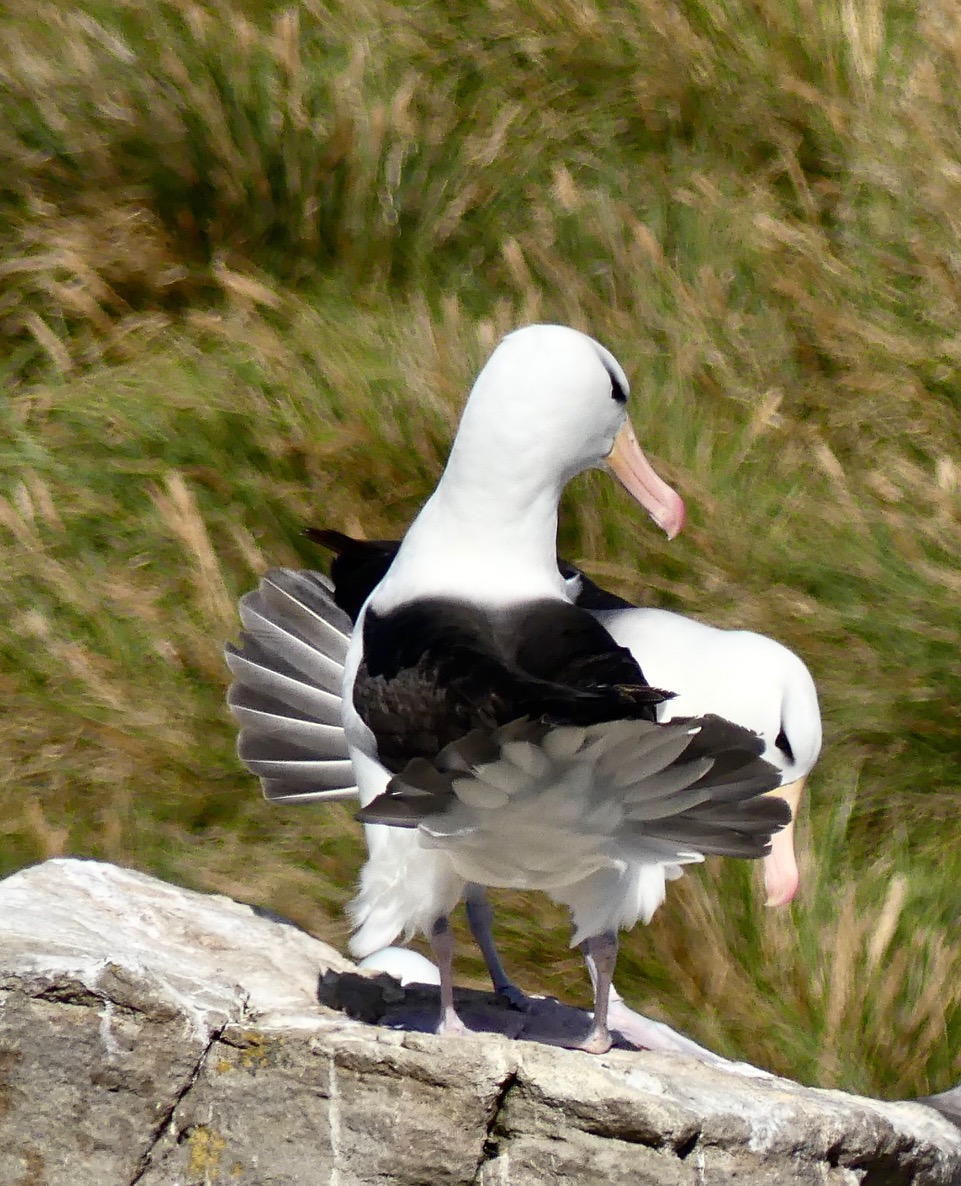 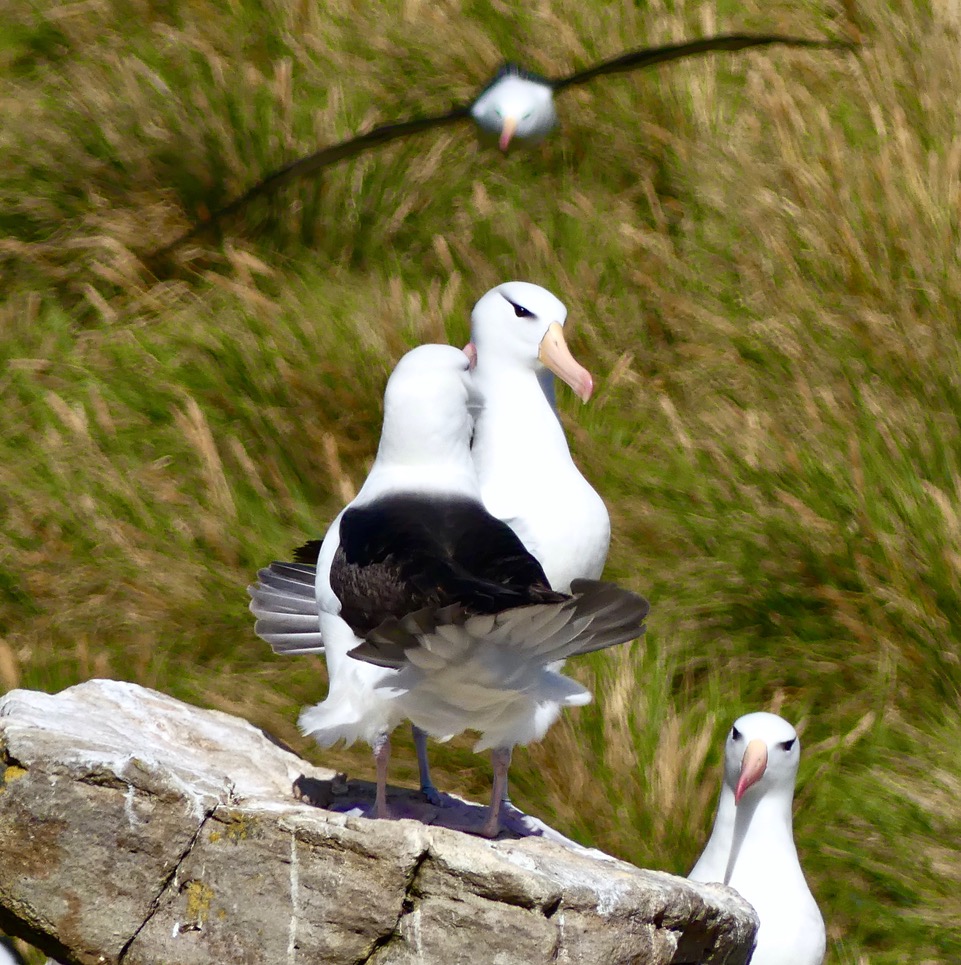 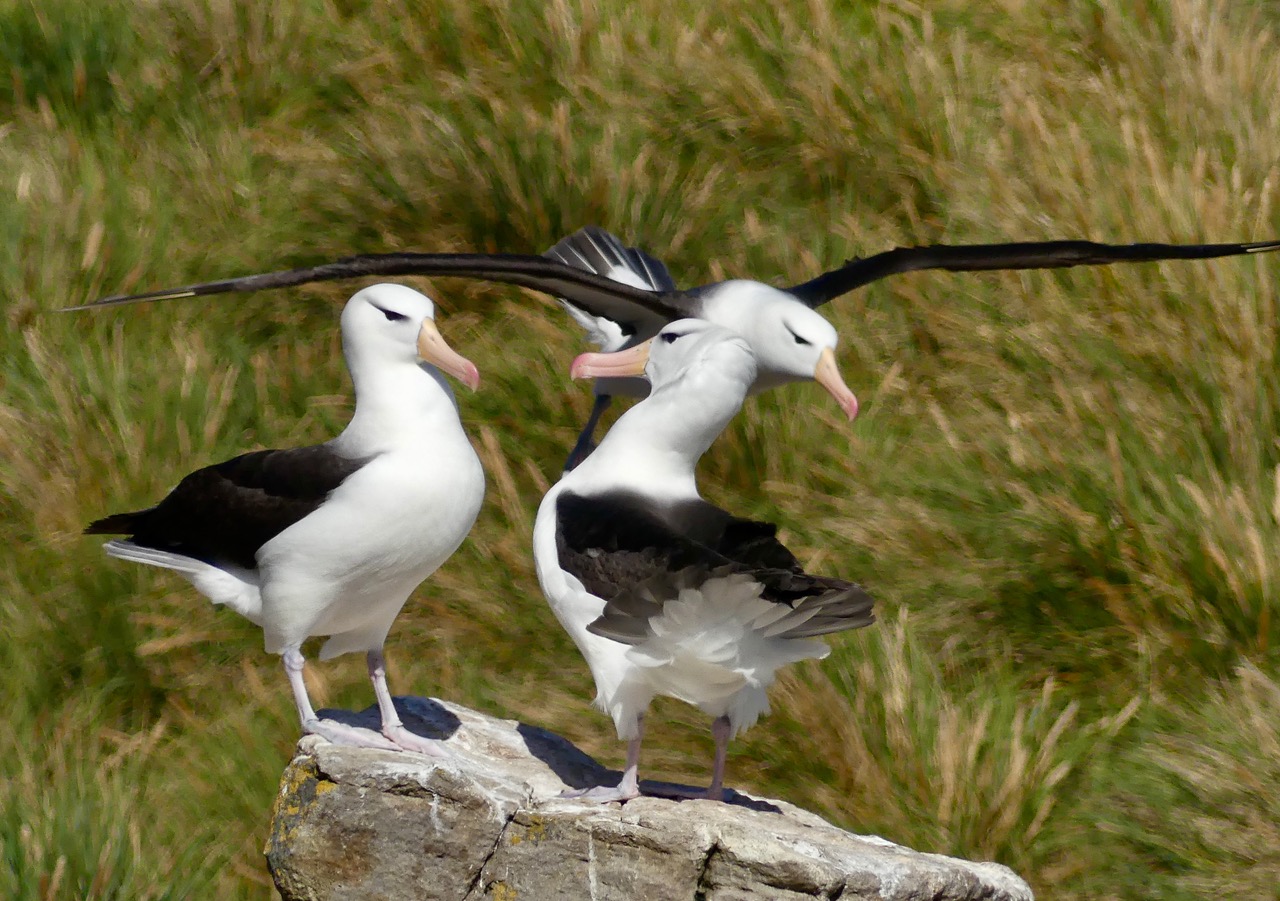