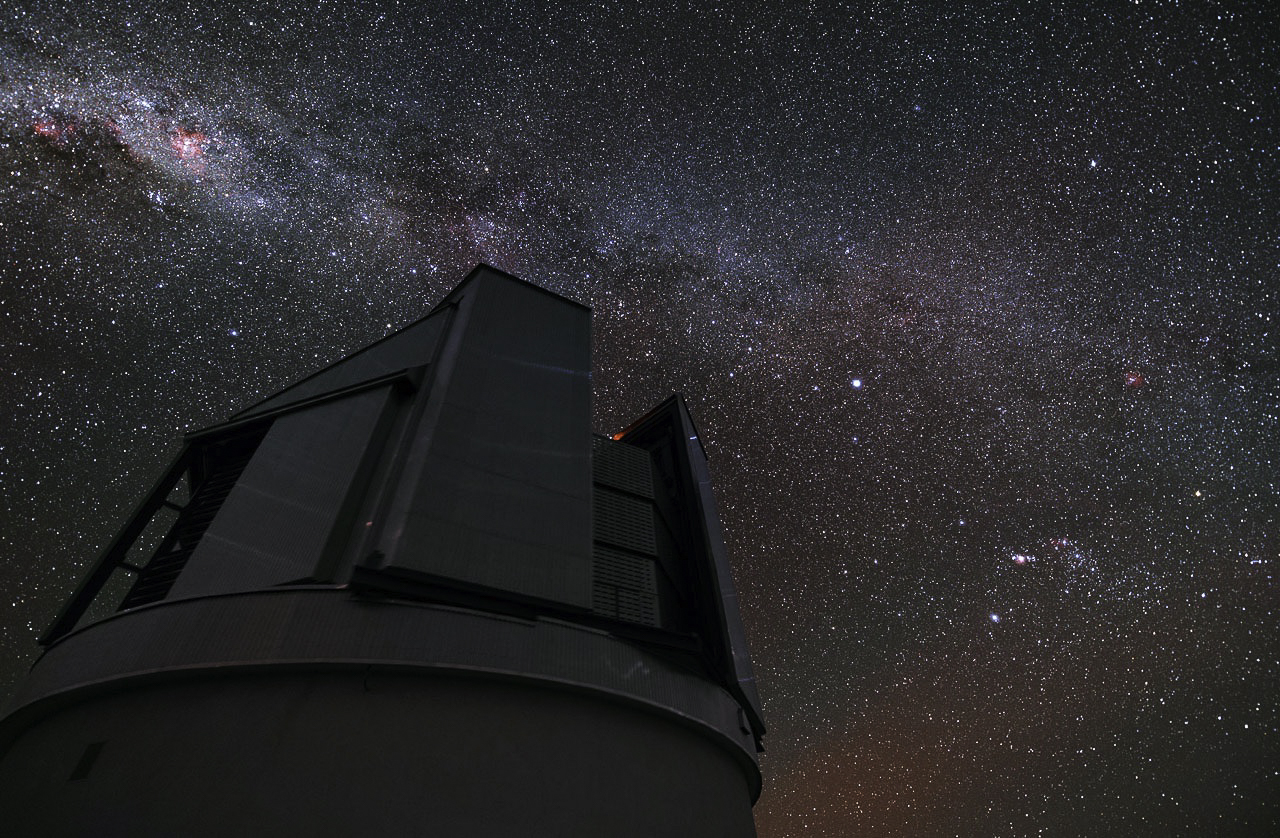 #1. Photo Credit and Caption: Y. Beletsky (LCO)/ESO. The VISTA (the acronym for Visible and Infrared Survey Telescope for Astronomy) is the most famous telescope at the Paranal Observatory. The observatory is located on the outskirts of the Chilean Atacama Desert, 600 km north of Santiago de Chile and at an altitude of 2400 metres. Like other observatories in this geographical area, it is located far from sources of light pollution and has one of the darkest night skies on the Earth.

The beauty of the night sky in the Southern Hemisphere can take your breath away—but it will also make you long for a good telescope to help you make sense of it all! Imagine, for a moment, being magically transported to Chile’s Atacama Desert for a night of star gazing with the VISTA infrared telescope, the most famous telescope at the Paranal Observatory. As you start to scan the starry wonder of the southern Milky Way Galaxy, you’ll see two distinctive celestial “clouds” nearby that are unusually bright. They’re bright because they are close to Earth and contain lots of stars. They were unusual enough to have captured the attention of 16th century observers like Ferdinand Magellan and the expedition’s chronicler, Antonio Pigafetta, who described the “many small stars congregated together” in his book about the voyage. As you look through the telescope, you’ll see that the Milky Way has captured smaller galaxies in its orbit, and the two largest of these are known as Magellanic Clouds.

The Magellanic Clouds are comprised of two irregular-shaped galaxies, the Large Magellanic Cloud (LMC) and the Small Magellanic Cloud (SMC), which orbit the Milky Way once every 1,500 million years and each other once every 900 million years. They are both are visible to the unaided eye in the Southern Hemisphere, but they cannot be observed from most northern latitudes. Lying only about 200,000 light years away, they were the closest known galaxies to the Milky Way until recently, when the Sagittarius and Canis Major dwarf galaxies were discovered and found to be even closer. Their relative proximity to Earth make the Magellanic Clouds ideal candidates for studying how stars form and evolve, and they have also played a significant role in our understanding of the distant Universe. Henrietta Leavitt discovered the period-luminosity relation for Cepheids while studying variable stars in the SMC. This has become one of the most important relations in determining distances to objects in the Universe, and forms the first rung of the extragalactic distance ladder. In addition, the metallicity of the Magellanic Clouds is much lower than that of the Milky Way. These lower metallicities align more closely with the conditions found in the early Universe (before the evolution and deaths of stars could enrich the interstellar medium) and give astronomers an idea of the processes that might have been in action billions of years ago.

Magellanic Clouds formed at about the same time as the Milky Way Galaxy, approximately 13 billion years ago. They have been known since ancient times by indigenous people from South America and Africa, and from the first millennium in Western Asia. The first preserved mention of the Large Magellanic Cloud is believed to be in petroglyphs found in Chile. Magellanic Clouds were recognized early in the 20th century as companion objects to the Milky Way Galaxy. When American astronomer Edwin Hubble established the extragalactic nature of what are now called galaxies, it was clear that the Magellanic Clouds had to be separate systems. By studying the motions of stars in the LMC galaxy, it has been calculated that it is spinning on its axis, taking about 250 million years to rotate once. If you look at the LMC using binoculars, it is very easy to pick out a bright patch of gas which, because it resembles a spider, has been given the name Tarantula Nebula. The Tarantula is a place where stars are being created by the gravitational contraction of its vast colorful clouds of dust and gas; in fact there is so much star creation going on that astronomers classify the Tarantula as a starburst region.

As the Magellanic Clouds began circling the Milky Way billions of years ago, an enormous stream of gas known as the Magellanic Stream was ripped from them. The stream now stretches across more than half of the night sky. But astronomers have been at a loss to explain how the stream became as massive at it is, over a billion times the mass of the sun. Now, astronomers at the University of Wisconsin-Madison and their colleagues have discovered that the Magellanic Clouds are massive enough to have their own halo, or corona, of warm gas enveloping them. The halo acts much like a protective cocoon, shielding the dwarf galaxies from the Milky Way’s own halo. As the smaller Magellanic Cloud galaxies entered the sphere of the Milky Way’s influence, parts of this halo were stretched and dispersed to form the Magellanic Stream. Special Note: The researchers published their findings on September 9, 2020 in the journal Nature. 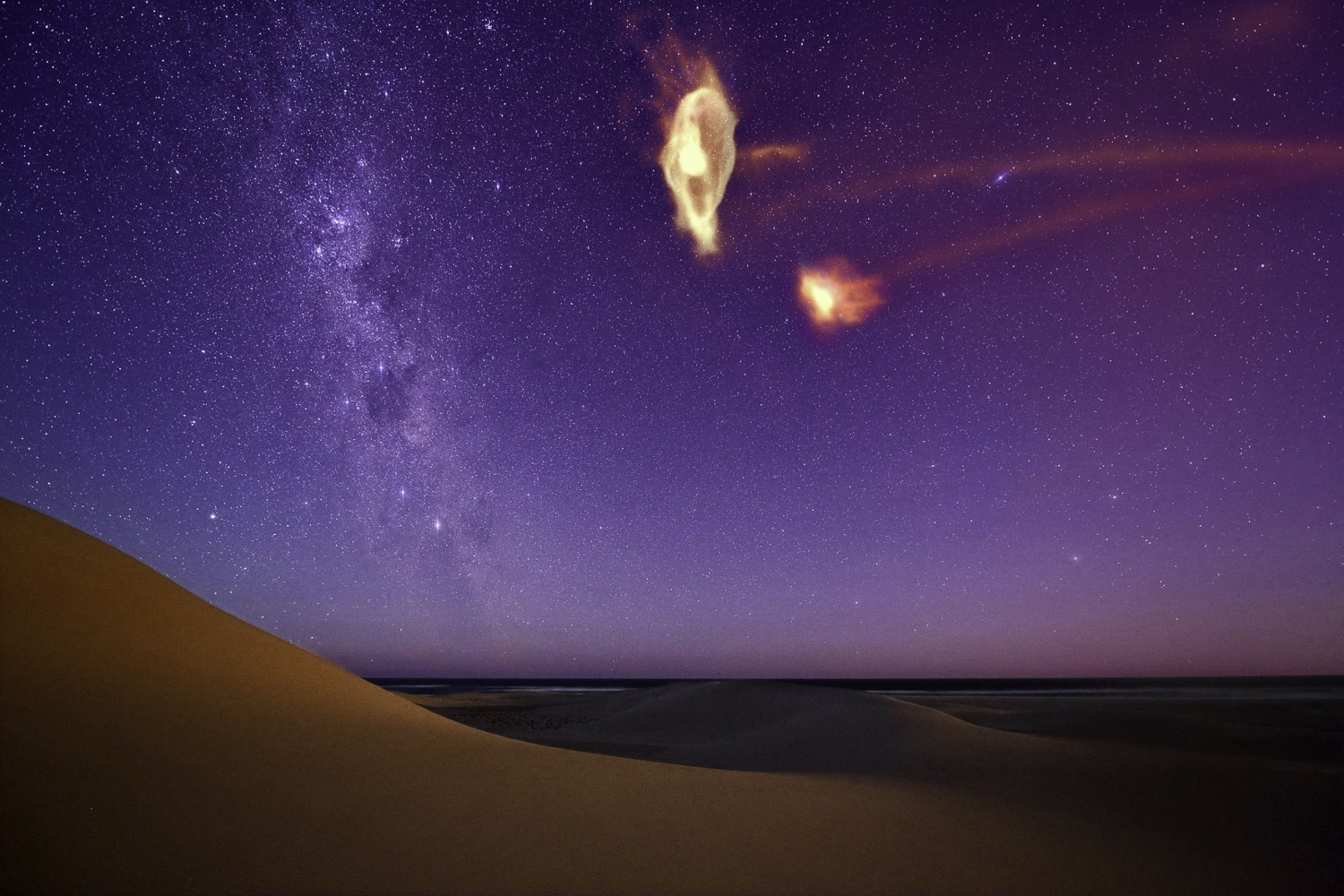 #2. Caption and Photo Credit (Above): Colin Legg / Scott Lucchini. This is a view of the gas in the Magellanic System as it would appear in the night sky. The Magellanic Corona covers the entire sky while the Magellanic Stream is seen as gas flowing away from the two dwarf galaxies, the Large and the Small Magellanic Clouds. This image is taken directly from the numerical simulations, however it has been modified slightly for aesthetics. Source: Massive Magellanic Cloud Halo Discovery Finally Explains Stream of Gas Swirling Around the Milky Way (University of Wisconsin-Madison posting on September 9, 2020 (Earth/Sky and ScienceTechDaily websites).

#3. Photo Credit and Caption: A Ultra High Definition (UHD) equirectangular panorama from the Chilean Atacama Desert, showing the Moon shining brightly overhead. Taken from low on the ground, we get a sweeping view of our galaxy. Visible on the boulder are several celestial petroglyphs. ESO/B. Tafreshi (twanight.org); Paranal Observatory, open source image collection. 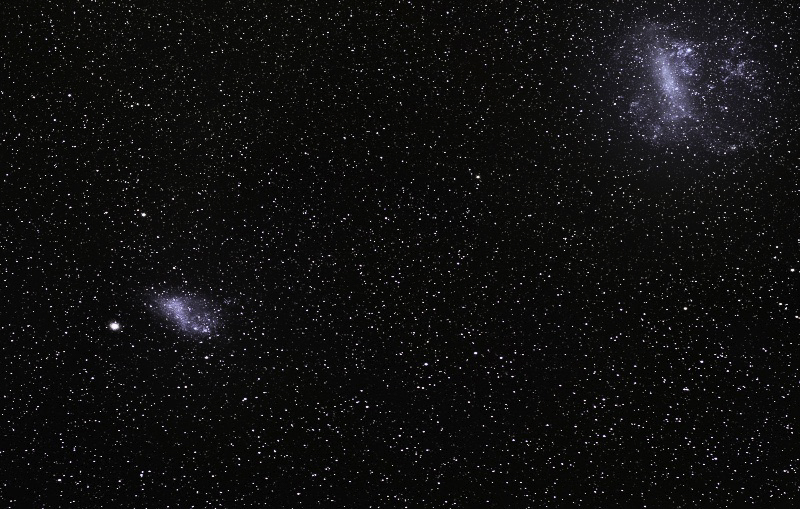 #4. Photo Credit and Caption (above): Large & Small Magellanic Clouds – www.eso.org/public/images/b01/ Recent studies of the Small Magellanic Cloud indicate that it might be a former single galaxy split into two remnants. Gravitational interactions with the LMC may have broken that galaxy apart. 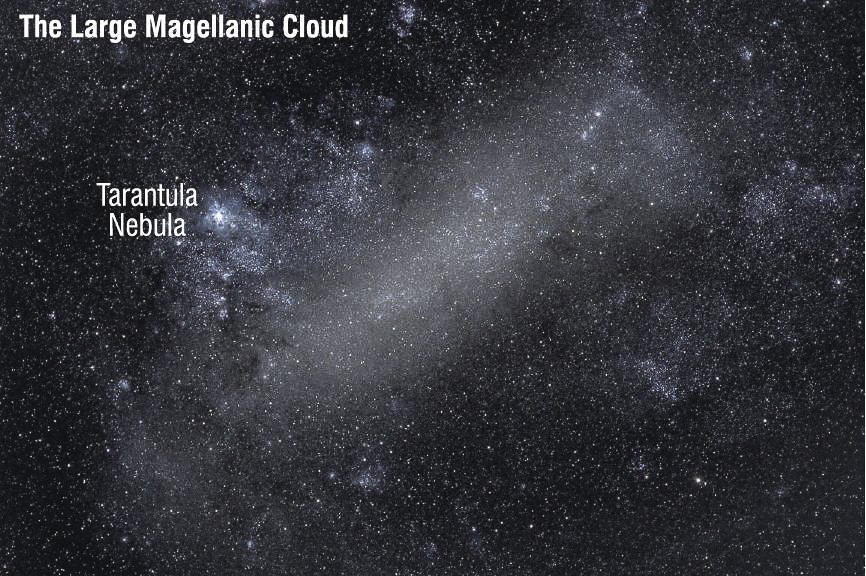 #6. Photo Credit and Caption: This ground-based image of the Large Magellanic Cloud was taken by German astrophotographer Eckhard Slawik. Image via ESA. 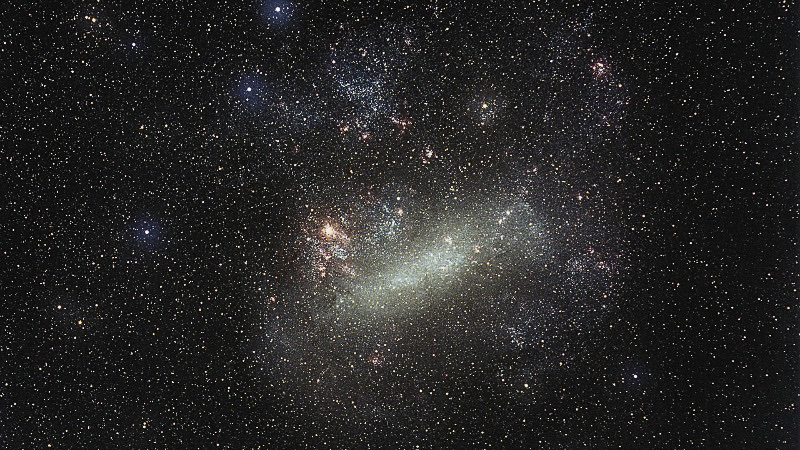 #6. Photo Credit and Caption: This ground-based image of the Large Magellanic Cloud was taken by German astrophotographer Eckhard Slawik. Image via ESA.

#7. Photo Credit and Caption (above): The Small Magellanic Cloud galaxy is a striking feature of the southern sky even to the unaided eye. But visible-light telescopes cannot get a really clear view of what is in the galaxy because of obscuring clouds of interstellar dust. VISTA’s infrared capabilities have now allowed astronomers to see the myriad of stars in this neighboring galaxy much more clearly than ever before. The result is this record-breaking image — the biggest infrared image ever taken of the Small Magellanic Cloud — with the whole frame filled with millions of stars. 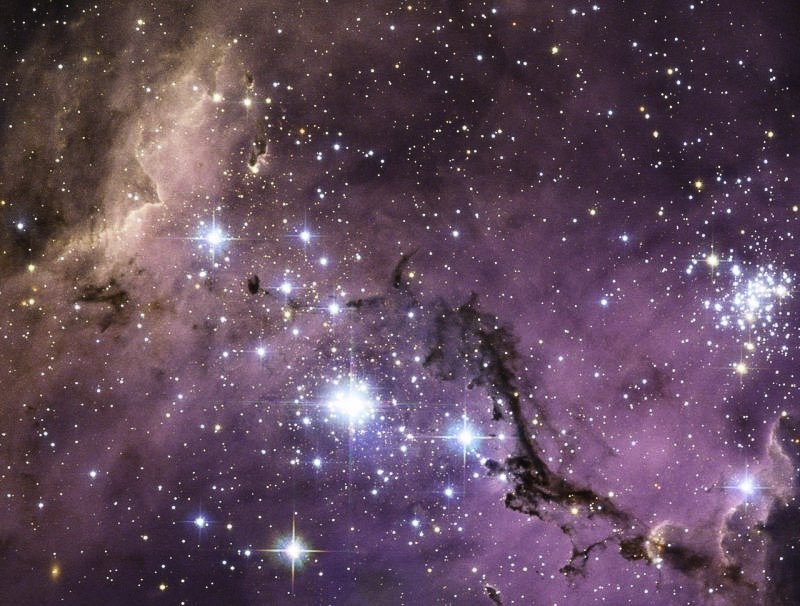 #8. Photo Credit and Caption (above): Nearly 200,000 light-years from Earth, the Large Magellanic Cloud, a satellite galaxy of the Milky Way, floats in space in a long and slow dance around our galaxy. As the Milky Way’s gravity gently tugs on its neighbor’s gas clouds, they collapse to form new stars. In turn, these light up the gas clouds in a kaleidoscope of colors, visible in this image from the Hubble Space Telescope. Image via ESA/NASA/Hubble. 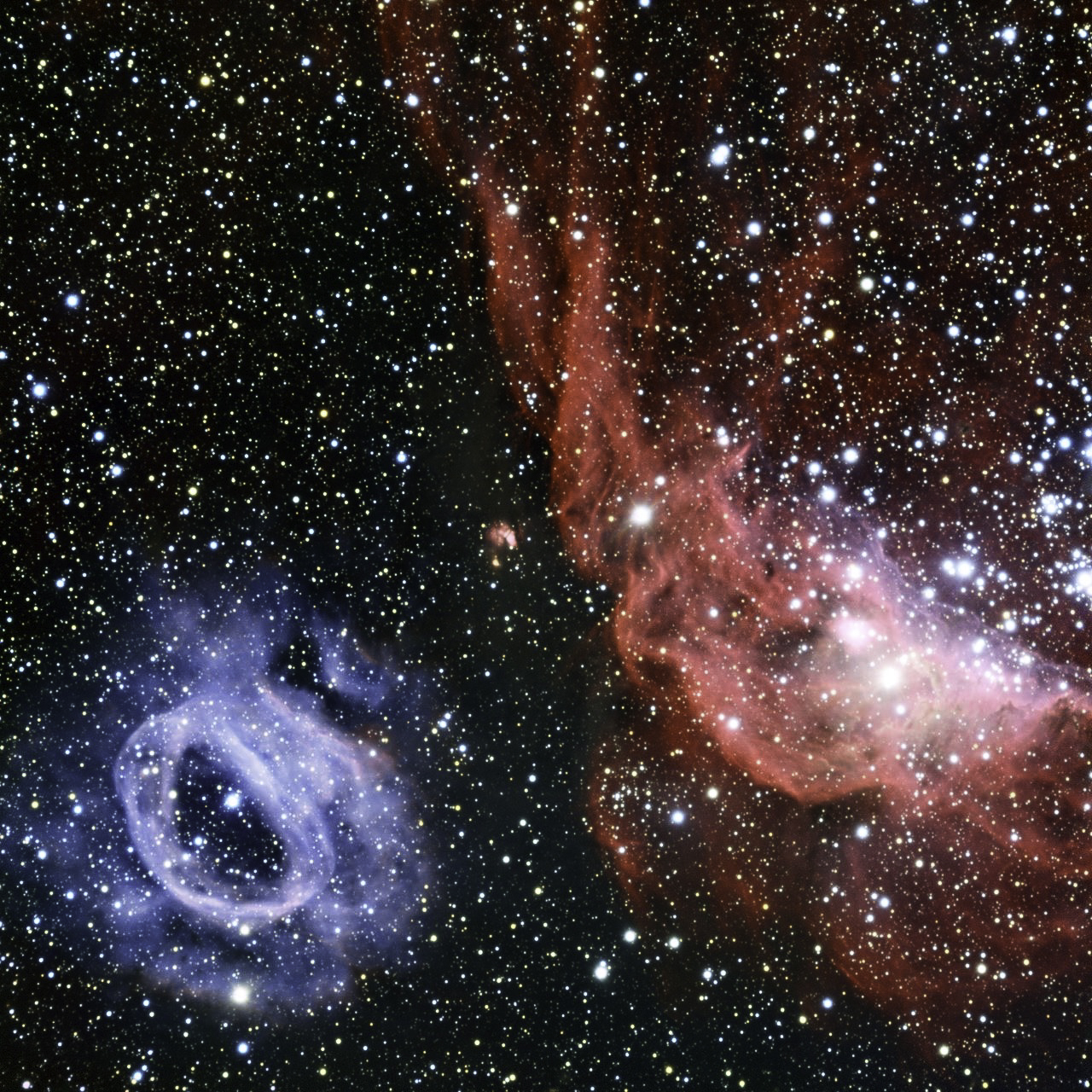 #9. Photo Credit and Caption: ESO’s Very Large Telescope (VLT) has captured a detailed view of a star-forming region in the Large Magellanic Cloud — one of the Milky Way’s satellite galaxies. This sharp image reveals two glowing clouds of gas. NGC 2014 (right) is irregularly shaped and red and its neighbour, NGC 2020, is round and blue. These odd and very different forms were both sculpted by powerful stellar winds from extremely hot newborn stars that also radiate into the gas, causing it to glow brightly.