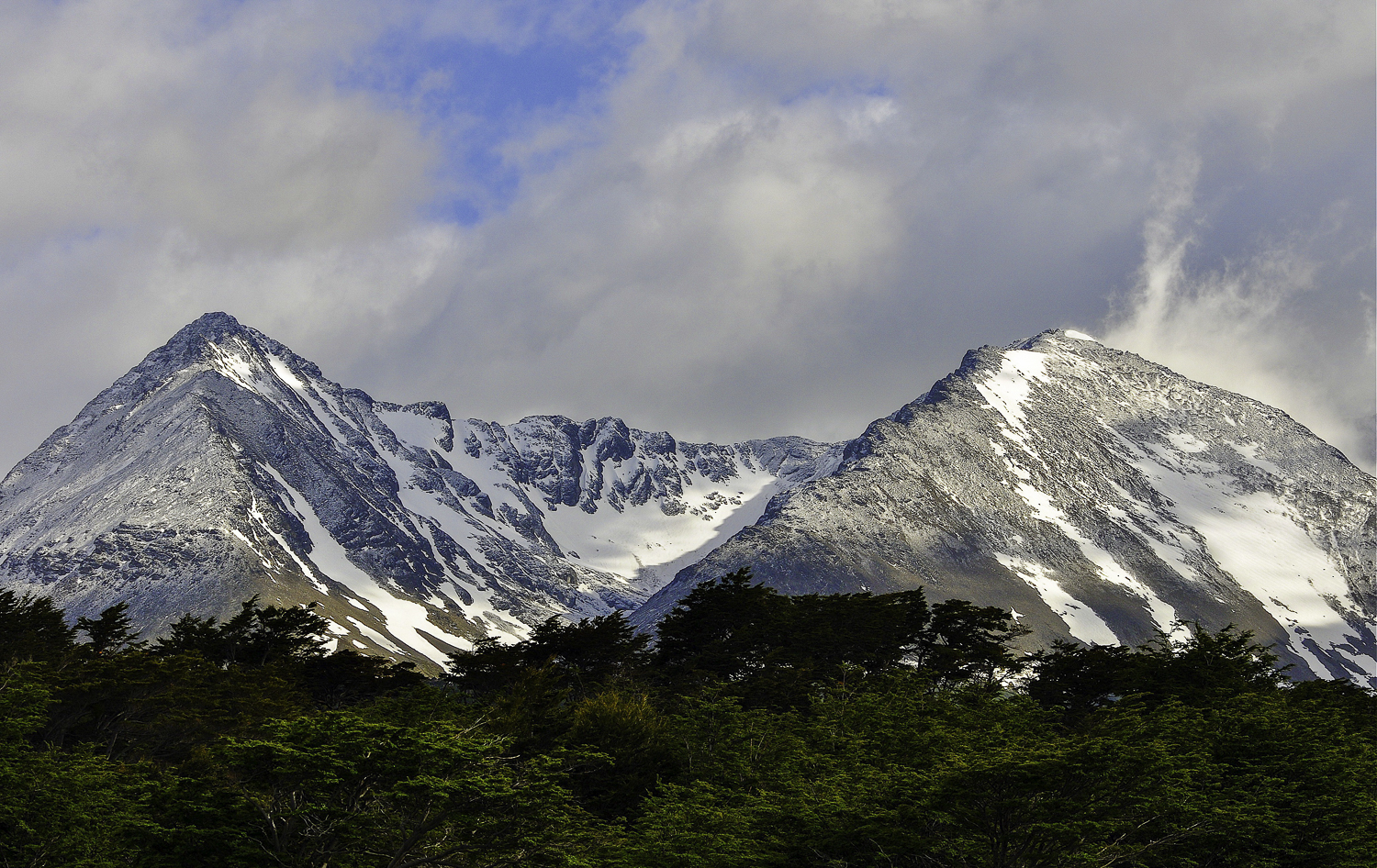 Tierra del Fuego is a land of striking contrasts—cool-temperate rainforests, miniature bryophyte forests, elegant orchids, the snow-capped Andes, azure-tinted glaciers, Magellanic penguins, Andean condors, austral parakeets, Magellanic woodpeckers, and a mouse-sized marsupial called monito del monte. The archipelago’s food-rich coastal waters and numerous rocky islets host many seabirds, including albatrosses, gulls, terns, and penguins. With this series of ePostcards on Tierra del Fuego, I’ll introduce you to the “uttermost place on Earth” and highlight some of the unique natural history details of the flora and fauna that have compelled me to return again and again. This beautiful archipelago is made up of about 100 islands and islets, and is located at the southernmost tip of South America. The region is home to a stunning diversity of globally-significant ecosystems. Note: All photographs in this series are my own and from multiple trips.

Setting the stage for our travels, we’ll first explore the Subpolar Magellanic Rainforest, the major terrestrial ecoregion found in southernmost South America (Chile and Argentina). This cool-temperate rainforest lies mostly to the west of the Andes Mountains, which run north-south for most of their length but curve eastward near the southern tip of South America, terminating in the archipelago of Tierra del Fuego. The ecoregion was covered by glaciers during the last ice age, and the landscape is deeply dissected by fjords, with numerous islands, inlets, and channels, including the Strait of Magellan, which separates Tierra del Fuego from the South American mainland. The Strait of Magellan is the waterway discovered by Portuguese explorer Ferdinand Magellan, linking the South Atlantic to the South Pacific. Only 30% of the islands have forests, which are all classified as Magellanic subpolar. The northeast region of Tierra del Fuego consists of Patagonian steppe and cool semi-desert ecosystems.

The marine climate along Tierra del Fuego’s western coast is comparable to that of North America’s Pacific Coast cool-temperate rainforest. The Andean and Fuegian mountains intercept moisture-laden westerly winds, creating temperate rainforest conditions, while the cold oceanic Humboldt Current, which runs up the west coast of South America, and the cold Antarctic Circumpolar Current, which runs from west to east through the Southern Ocean, keep the Magellanic ecoregion cool and wet, and the strong oceanic influence moderates seasonal temperature extremes. Average annual temperatures vary from 42.8 °F (6 °C) in the north to 37.4 °F (3 °C) in the south and annual rainfall ranges from 157 in (4,000 mm) in the west to 17.7 in (450 mm) in the east. Snowfall can occur even in summer. Fog is very frequent. Winds are so strong that trees in wind-exposed areas grow into twisted shapes, inspiring people to call them “flag-trees.” The southernmost islands possess a subantarctic climate typical of tundra, which does not support tree growth. Some snow and ice-bound areas in the interior have a polar climate. Regions in the world with similar climates to southern Tierra del Fuego include the Aleutian islands, Iceland, the Alaska Peninsula, the Faroe Islands, Macquarie Island, and the Heard and McDonald Islands.

Magellanic rainforests evolved in isolation from those of North America and are characterized by broadleaf trees, especially members of the genus Nothofagus, the southern beeches. These are the only forests in the world to have developed in a climate with such cold summers. One third of the woody species you find in these forests are endemic to the region. These forests are a refuge for the so-called Antarctic flora, and share many plant families with the temperate forest ecoregions of New Zealand, Tasmania, and Australia. Three species of southern beech (Nothofagus) dominate the Magellanic subpolar rainforest—Nothofagus antarctica, Nothofagus pumilio, and the evergreen Nothofagus betuloides. In addition to Nothofagus, six other tree species are found in the forests of Tierra del Fuego, including the canelo or winter’s bark (Drimys winteri), Maytenus magellanica, and Pilgerodendron uviferum, the southernmost conifer in the world. Forests extend as far south as Isla de los Estados, Navarino Island, and the northern part of Hoste Island. Dwarf Nothofagus communities are found at altitudes above 1,640 ft (500 m). On Wollaston Islands and the southern part of Hoste Island the vegetation is subantarctic tundra.

Photo Credits and Captions [All photos are by Audrey Benedict]:

1. (cover image, above) A Magellanic subpolar rainforest of (southern beech) rises to tree-limit along the Strait of Magellan in the Fuegian Range.
2. (1st image below) Magellan’s evergreen beech (Nothofagus betuloides), is also called guindo, and its occurrence on Hornos Island earns it the distinction of being the southernmost tree on Earth. In 1769, Sir Joseph Banks collected a specimen of the tree in Tierra del Fuego during Captain Cook’s first voyage.
3. Chilean firebush (Embothrium coccineum) is a beautiful endemic species and “paints” broad brush strokes of glowing crimson across forested slopes beginning in early December. The flowers are mainly pollinated by hummingbirds and black-chinned siskins.
4. The white dove orchid (Codonorchis lessonii) often blooms prolifically from November to March, but the best season is December.
5. The Magellanic Woodpecker (male) is the largest woodpecker in South America. I’ll devote an entire ePostcard to this woodpecker.
6. A noisy flock of Austral Parakeets, with their emerald green, turquoise and reddish feathers flashing in the sunlight, are a sight to behold in the forest.
7. Hiking to a retreating glacier from the Mare Australis. 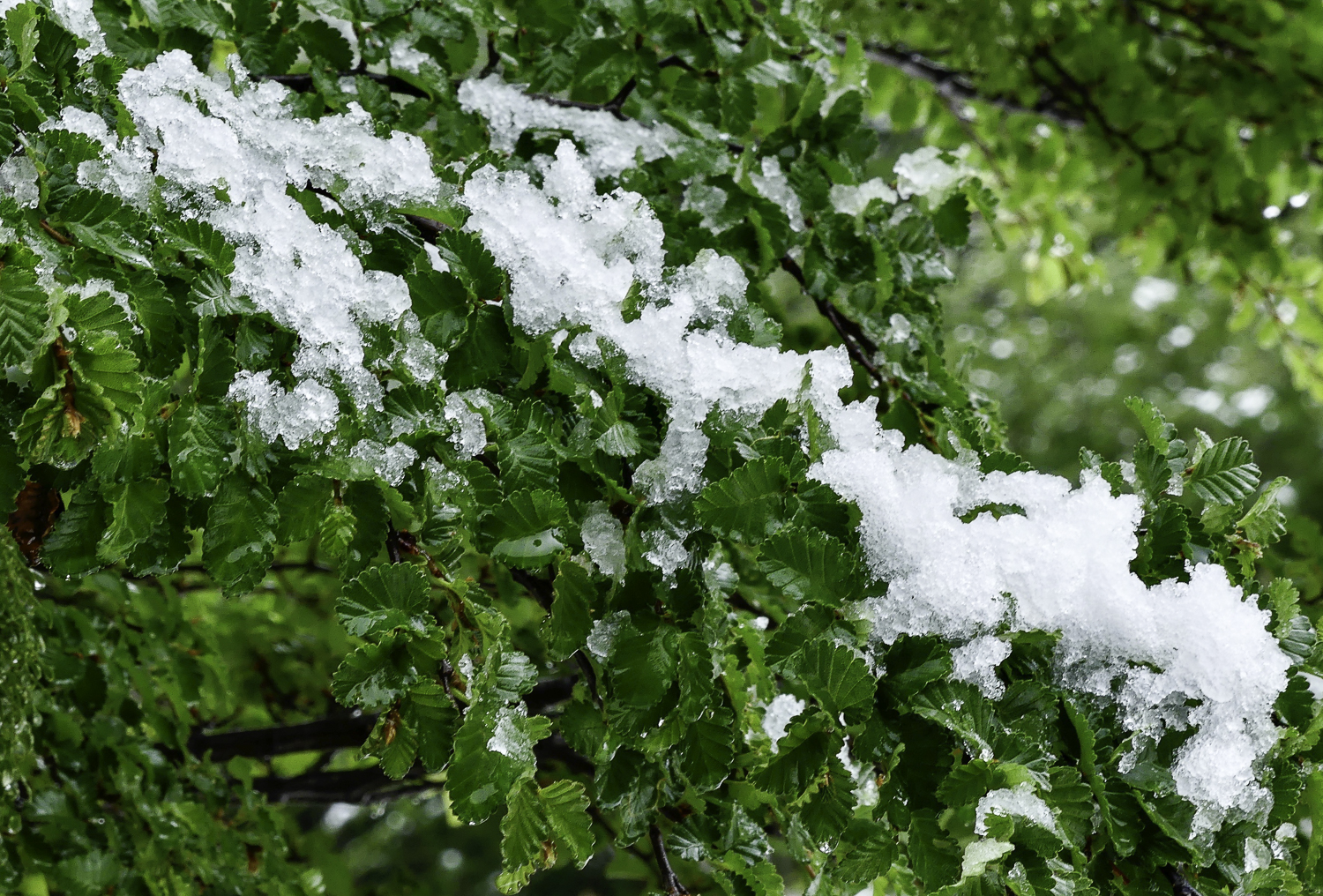 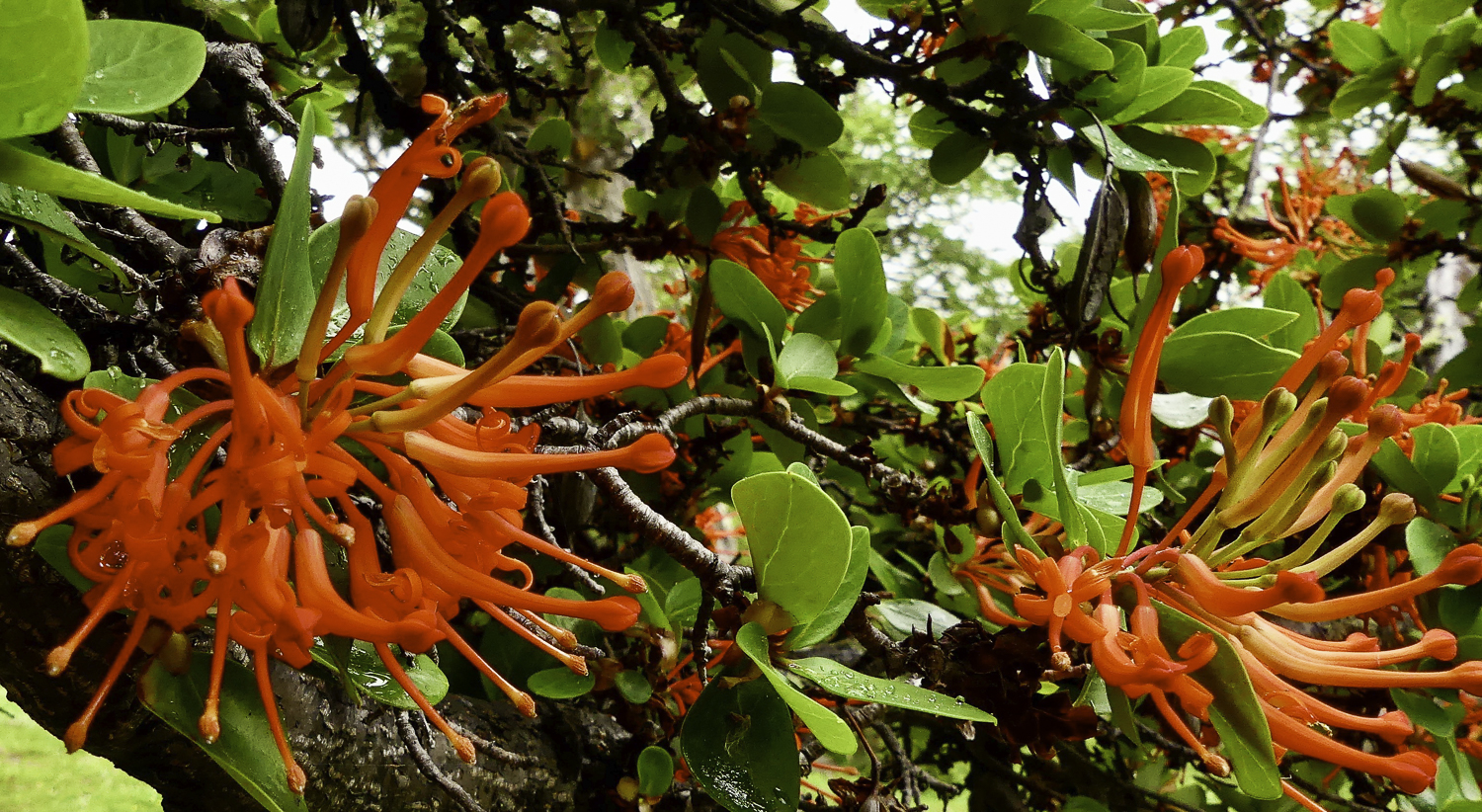 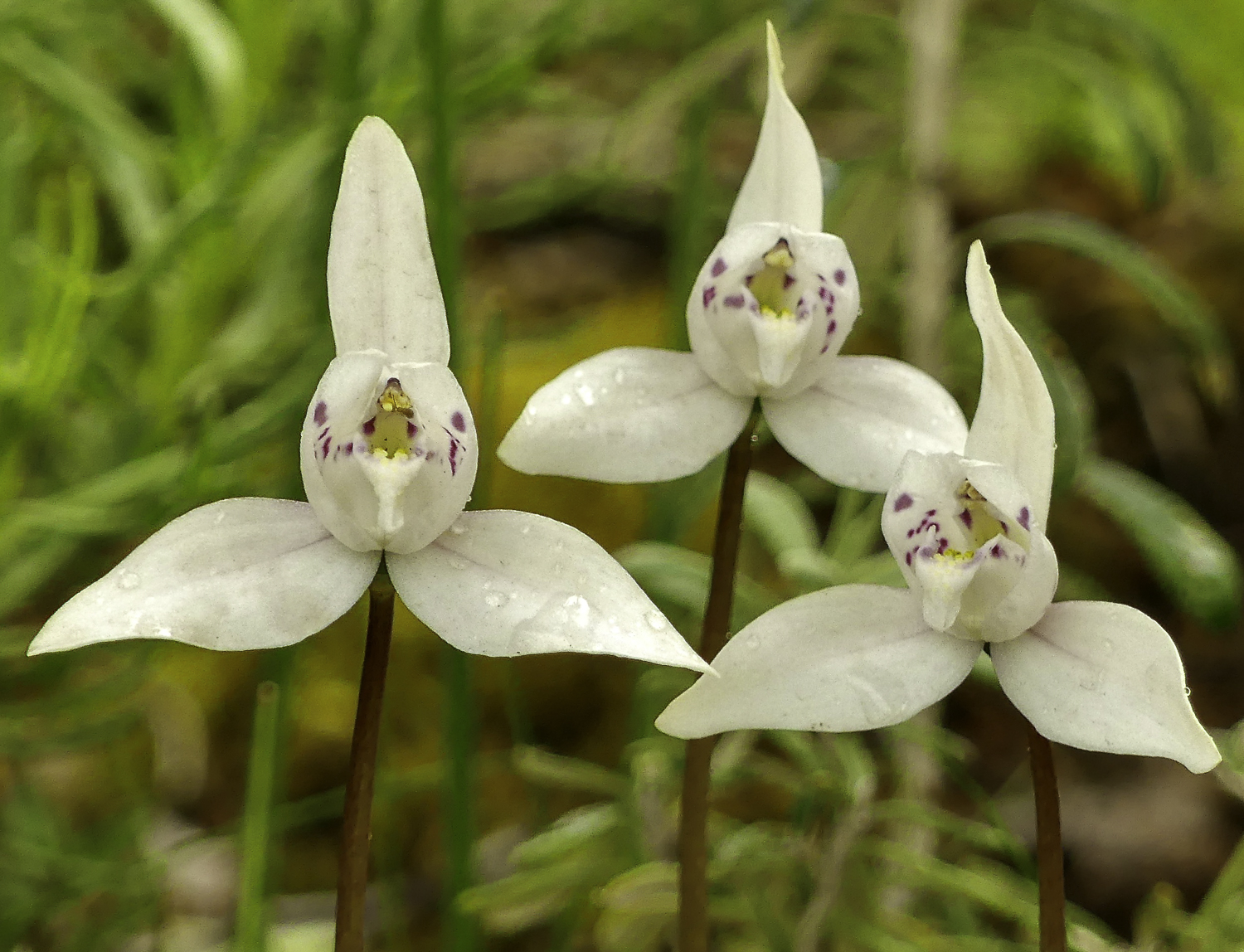 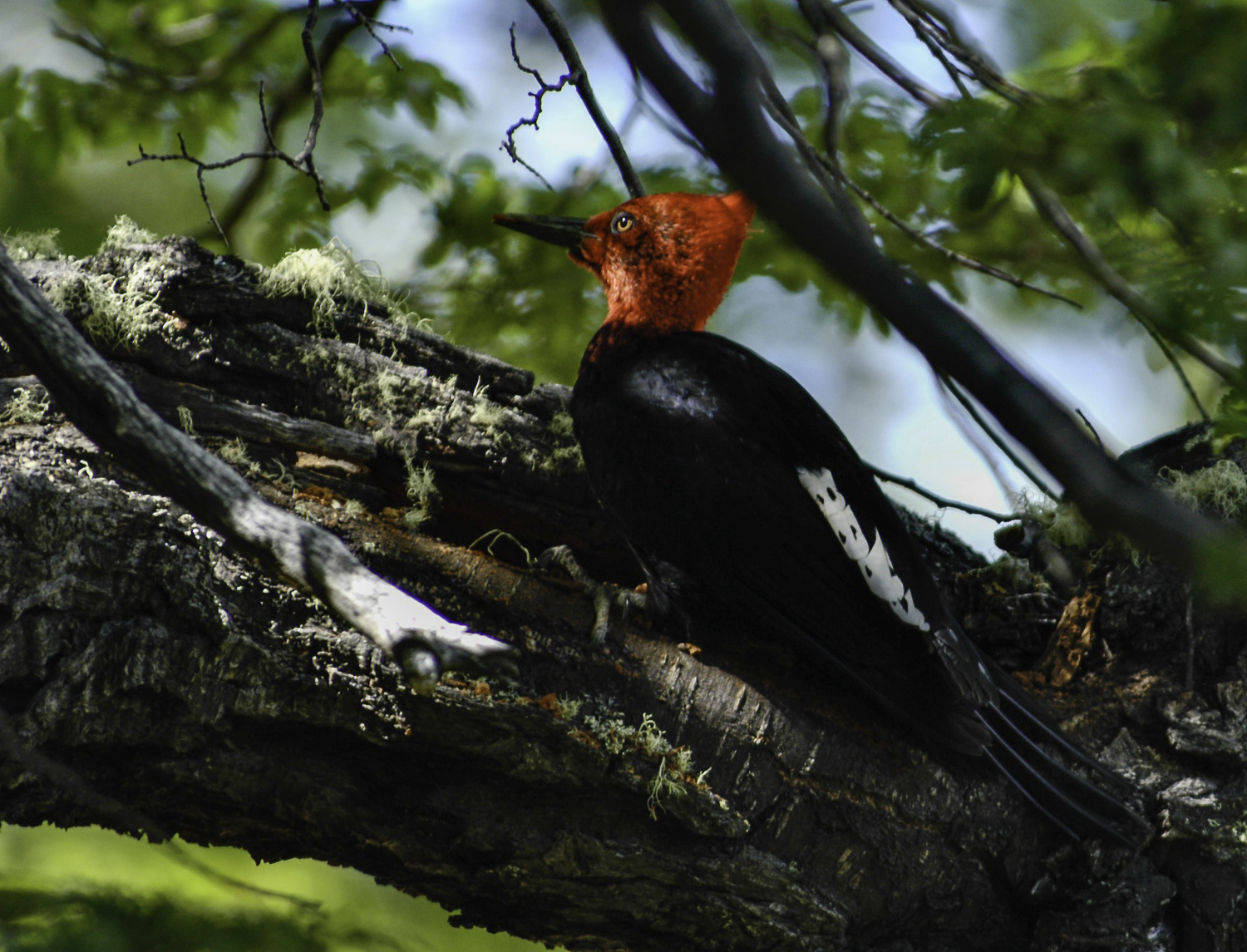 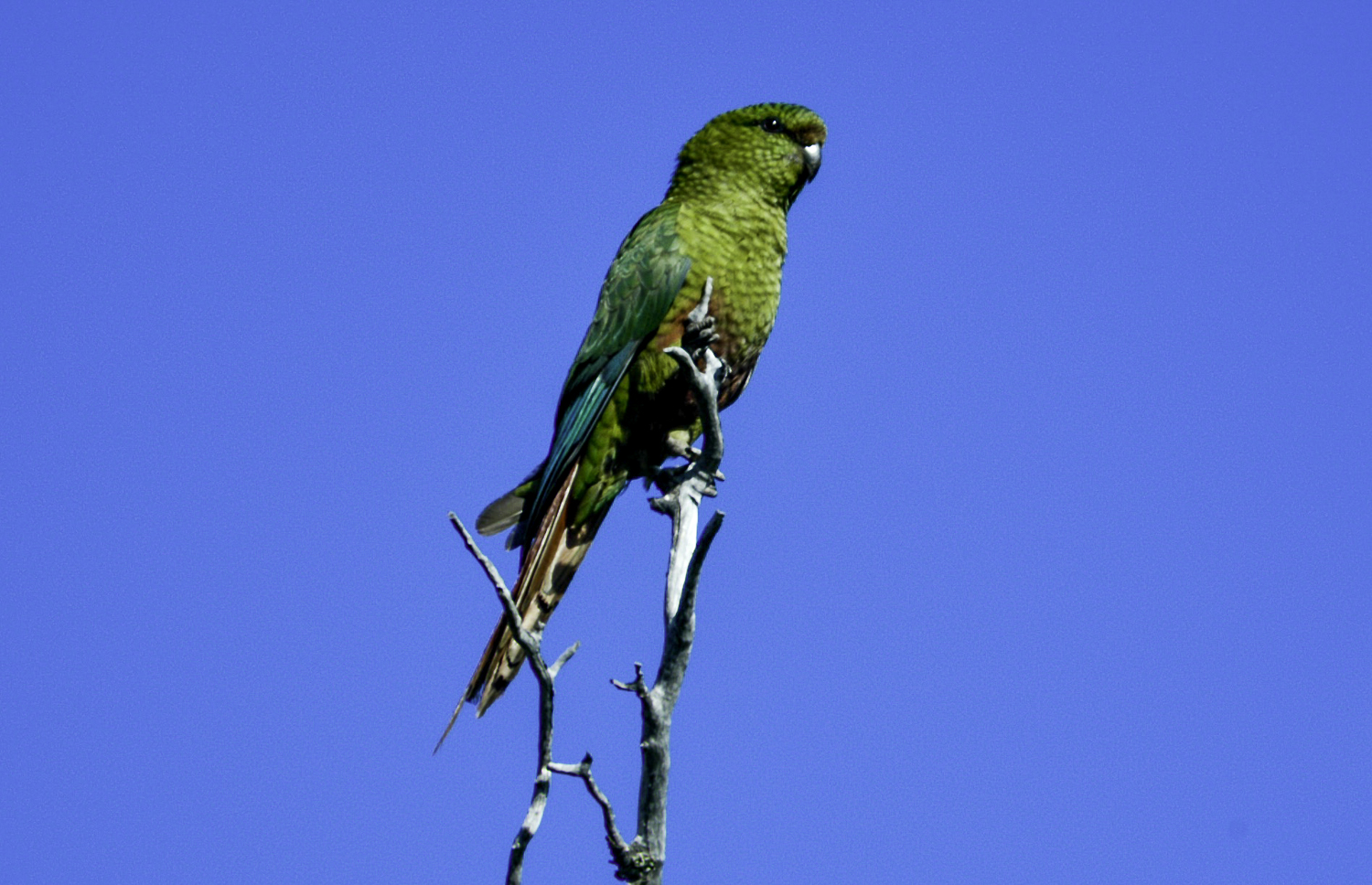 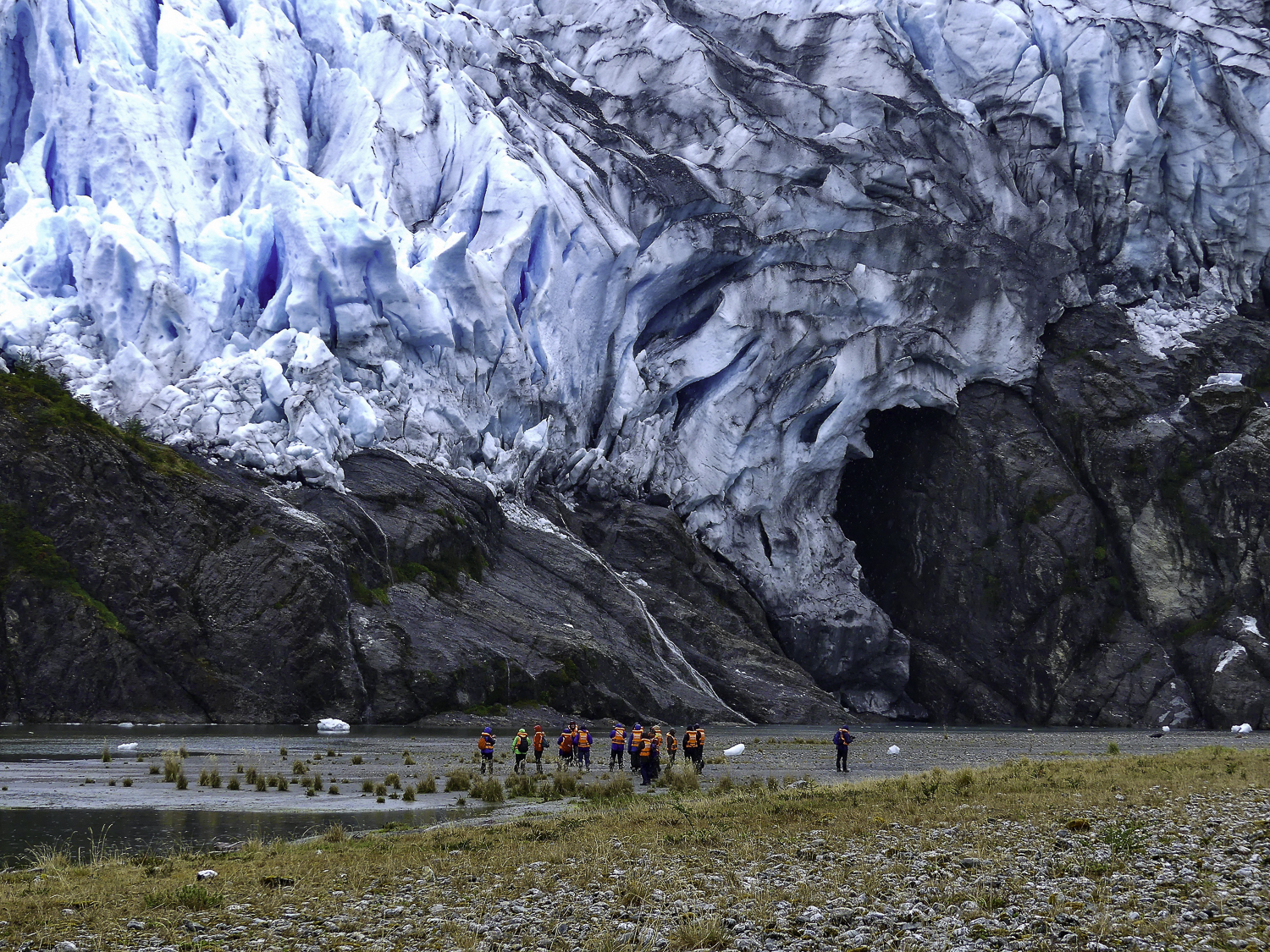