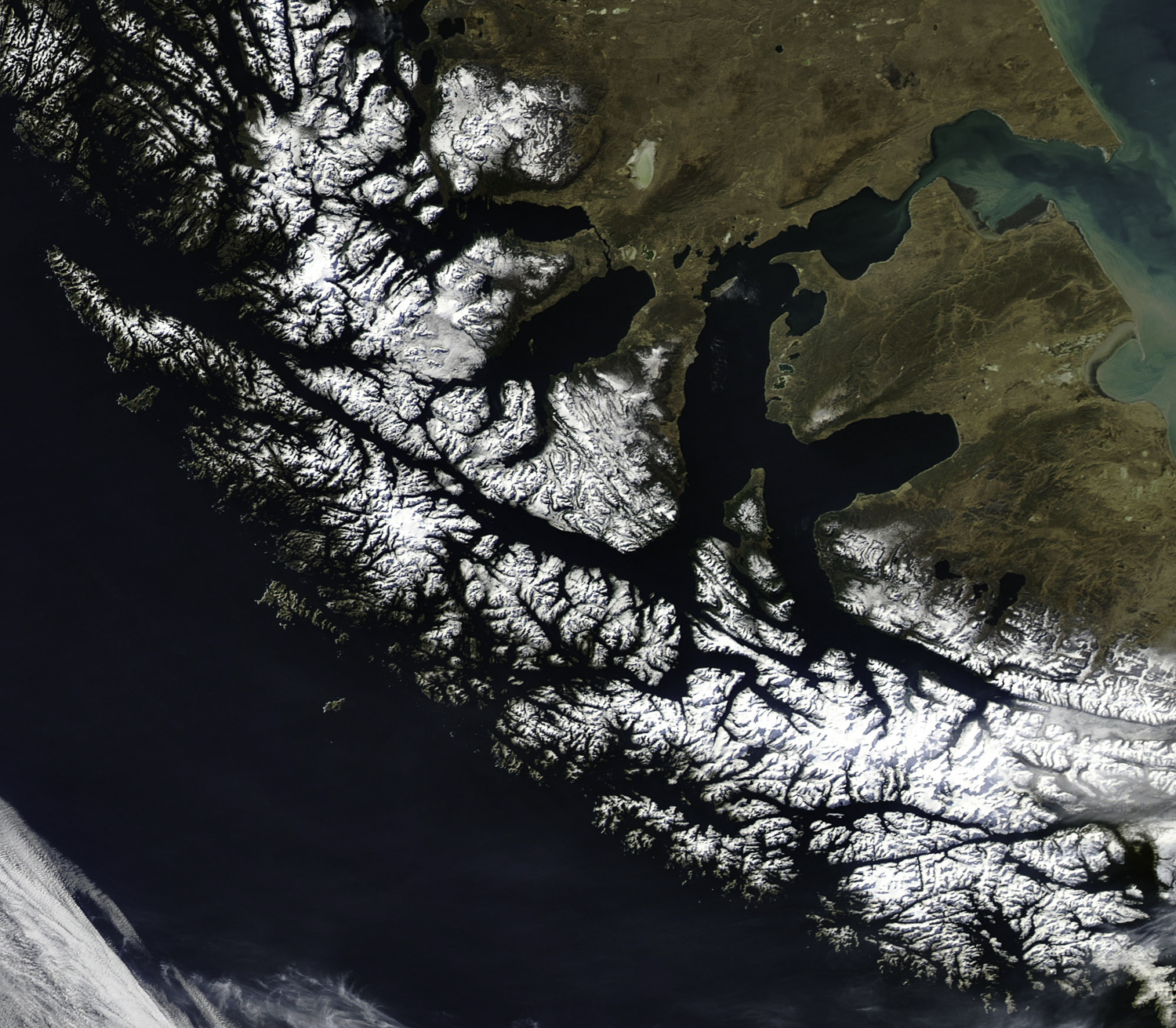 By Magellan’s calculations, the expedition was months behind schedule. They should have found the strait by now and been on their way to the Spice Islands. On October 18, having been bedeviled by foul weather at sea, the fleet finally left the sheltered waters of the Santa Cruz River and resumed sailing south. Constantly vigilant, Magellan scrutinized every inlet and bay they passed for the slightest indication of a westward trending waterway. On October 21, he spotted a prominent headland at 52°S latitude that extended into the open ocean—a cape. As the Trinidad sailed closer, Magellan could see that the seaward side of the cape was flanked by a sand beach strewn with the skeletons of whales and appeared to mark the entrance to a large bay. With a glance towards the heavens, Magellan dared to trust his instincts that the concentration of bones suggested a major whale migration route, and perhaps one leading from the Atlantic to the Pacific. Clearly worth exploring, Magellan signaled the other three ships to follow him into the bay. The ships immediately encountered competing tides and standing waves as they sailed across the bay and approached yet another break in the mainland coastline. You can imagine the men’s mounting excitement as the ships navigated the swirling tides and entered a much narrower marine passage with strong currents consistent with those of a strait. Unlike the Río de la Plata, the water did not lose its salinity as they progressed, and soundings indicated that the waters were consistently deep. Once they were well within the strait’s embrace, Magellan saw that these waters cut a dramatic swath leading west. Against impossible odds, the great navigator had finally found his strait.

To Pigafetta, it was clearly a miracle. “After setting course to the fifty-second degree toward the said Antarctic Pole,” he wrote, “on the Festival of the Eleven Thousand Virgins, we found by miracle a strait.” The cape’s modern name, Cabo Virgenes (Cape of Virgins) honors the day of Magellan’s discovery and marks the entrance to the strait that would one day be known as the Strait of Magellan. Magellan had no idea of the challenges he would face in navigating this 300 mile-long watery maze. Tides can run as much as 24-feet, which makes it difficult to anchor ships securely. Pigafetta commented on the extreme depth of the strait: “In this place it was not possible to anchor because no bottom was found. Wherefore it was necessary to put cables ashore of 25 or 30 cubits in length [1 cubit = 21 inches].” Beds of giant bull kelp threatened to foul lines, keels, and rudders. Rocky reefs along the strait were a frequent hazard. At night, the men caught glimpses of fires burning in what they believed to be indigenous encampments, prompting Magellan to give the region the name Tierra del Fuego (Land of Fire). Although Magellan undoubtedly saw the Onas’ campfires along the strait, there is no mention in Pigafetta’s journal that they saw or had any contact with Fuegian indigenous peoples. Undoubtedly, as portrayed in the mural that I photographed at the Museo del Fin del Mundo (#4), the Ona must have watched as the strange boats entered their world for the first time.

Magellan’s extraordinary skills as a mariner would prove to be the key to his ultimate success in navigating the entire length of the “Dragon’s Tail.” Whenever they were underway, he ordered sailors to climb to the highest perch on each ship, where they could watch for hazards. He also deployed small scouting parties in the longboats to travel ahead of the armada and warn him of rocky shoals, bays that deceptively resembled a continuation of the strait, and other dead ends that would have delayed their passage. The archipelago of Tierra del Fuego covers more than 28,000 square miles, encompassing cool-temperate rainforests, lakes, glaciers, and the southern extension of the Andes mountain range. The climate was decidedly cold and wet, and the pilots found that the sky was rarely clear by day or night, which made it nearly impossible to take accurate measurements either by the stars or the sun.

As the ships negotiated the frigid waters, the men were increasingly impressed by the strait’s dramatic scenery, so unlike anything they had ever experienced. Fresh snow was often observed on the towering glaciers and down to the waterline, and the meltwater from the snow and ice fed spectacular waterfalls that cascaded down over the sheer cliffs of the fjords. Countless icebergs calved from the tidewater glaciers frequently formed an armada of ice on the water, with ice colors ranging from white, to gray, and an unearthly azure blue. Pigafetta wrote glowingly of the strait’s natural splendor and the abundance of sustaining food: “One finds the safest of ports every half league in it, water, the finest of wood, fish, sardines and missiglioni, while smallage, a sweet herb, grows around the springs. We ate of it for many days as we had nothing like it. Although the men didn’t realize it, their diet replenished vitamin C, which protected them from scurvy. All things considered, Pigafetta suggested, “I believe there is not a more beautiful or better strait than this one.” Despite his own euphoria on discovering the strait, Magellan quickly realized that he had mistakenly conceived of the strait as a simple and short channel to traverse, when it was actually a challenging maze that would test his navigational abilities at every turn.

Despite all the challenges, the prospect of successfully negotiating the strait and sailing on to the Moluccas appeared increasingly likely, at least to Magellan. At a critical juncture in the expedition, perhaps midway through the strait, Magellan convened a council of the captains and pilots to discuss the fleet’s future course. The men of the Concepción and the Victoria were strongly in favor of pushing on. The only voices of dissent came from pilot Estêvão Gomes and the crew of the San Antonio. Magellan prevailed in his decision to proceed as planned and gave the orders to weigh anchor the next day. Gomes’s opposition resulted in a mutiny by desertion, not a violent uprising with flashing swords but one in which the mutineers took advantage of the “cover” of a navigational reconnaissance of Magdalen Sound to reverse direction and sail back to Spain, taking with them a majority of the expedition’s supplies. With the desertion of the San Antonio, Magellan’s fleet had been reduced to three ships and what meager provisions remained in their holds. He felt compelled to ask his two remaining captains if they wished to return to Spain as well. Magellan listened respectfully to their concerns that proceeding without sufficient provisions and without any knowledge of the ocean distance to the Spice Islands seemed unwise. Magellan replied that he believed that they still had three months of provisions and to trust that God would guide them to their final destination.

The next morning, Magellan gave the order to weigh anchor. The three ships ignited a salvo of cannon fire that reverberated among the towering mountains and azure glaciers of the strait, and the fleet set sail once again. At last, 38 days after entering the strait, the sparkling waters of the open ocean finally came into view. Pigafetta writes that Magellan was so overwhelmed to have completed his navigation of the strait that he “wept tears of joy.” Magellan named the just-discovered Pacific cape “Cabo Deseado (Cape Desire), “for we had been desiring it for a long time.” On November 28, 1520, the triumphant Armada de Moluccas entered an ocean that was calm and peaceful, which inspired Magellan to call it Mar Pacifico (“peaceful sea”). Reveling in their accomplishment, all discord and arguments for turning back dissipated like morning fog. According to historical weather research, Magellan probably benefited from an El Niño, which provided calm winds during his crossing of the Pacific.

Magellan’s skill in negotiating the entire length of the strait is widely acknowledged as the single greatest feat in the history of maritime exploration. Seeking riches and personal glory, Magellan’s daring and ambitious circumnavigation provided the Europeans with far more than just spices. Although the trip westward from Europe to the east via the Strait of Magellan had now been discovered and mapped, the journey would ultimately prove too long and dangerous to become a practical route to the Spice Islands. Nevertheless, European geographic knowledge was expanded immeasurably by Magellan’s expedition. He found not only a massive ocean, hitherto unknown to Europeans, but he also discovered that the earth was much larger than previously thought. Finally, Magellan’s circumnavigation of the globe conclusively discredited the medieval theory that the Earth was flat.

#1. NASA satellite photograph of the Strait of Magellan. This navigable sea route links the Atlantic and Pacific Oceans, and separates mainland Chile from the archipelago of Tierra del Fuego. 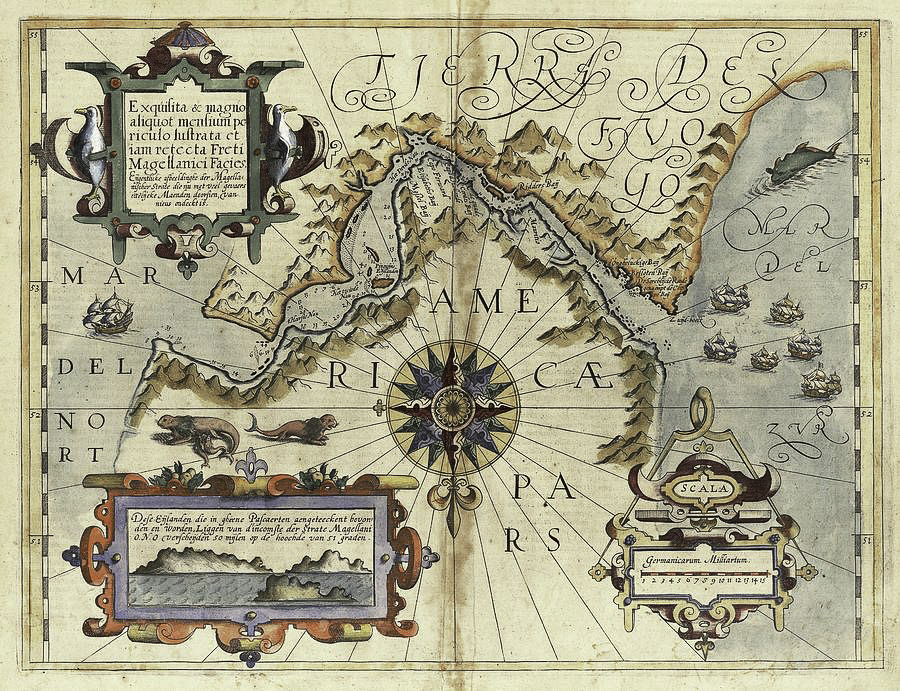 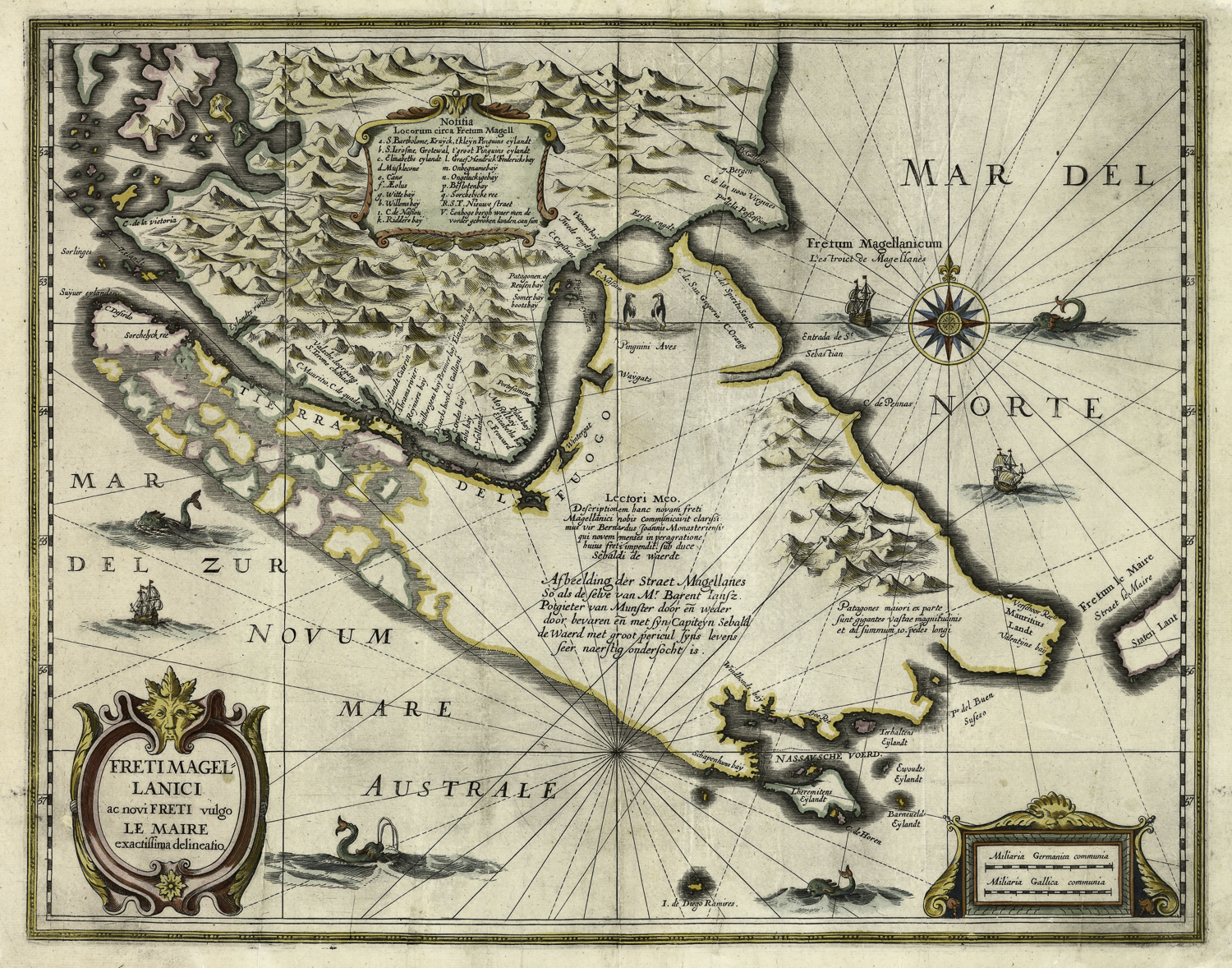 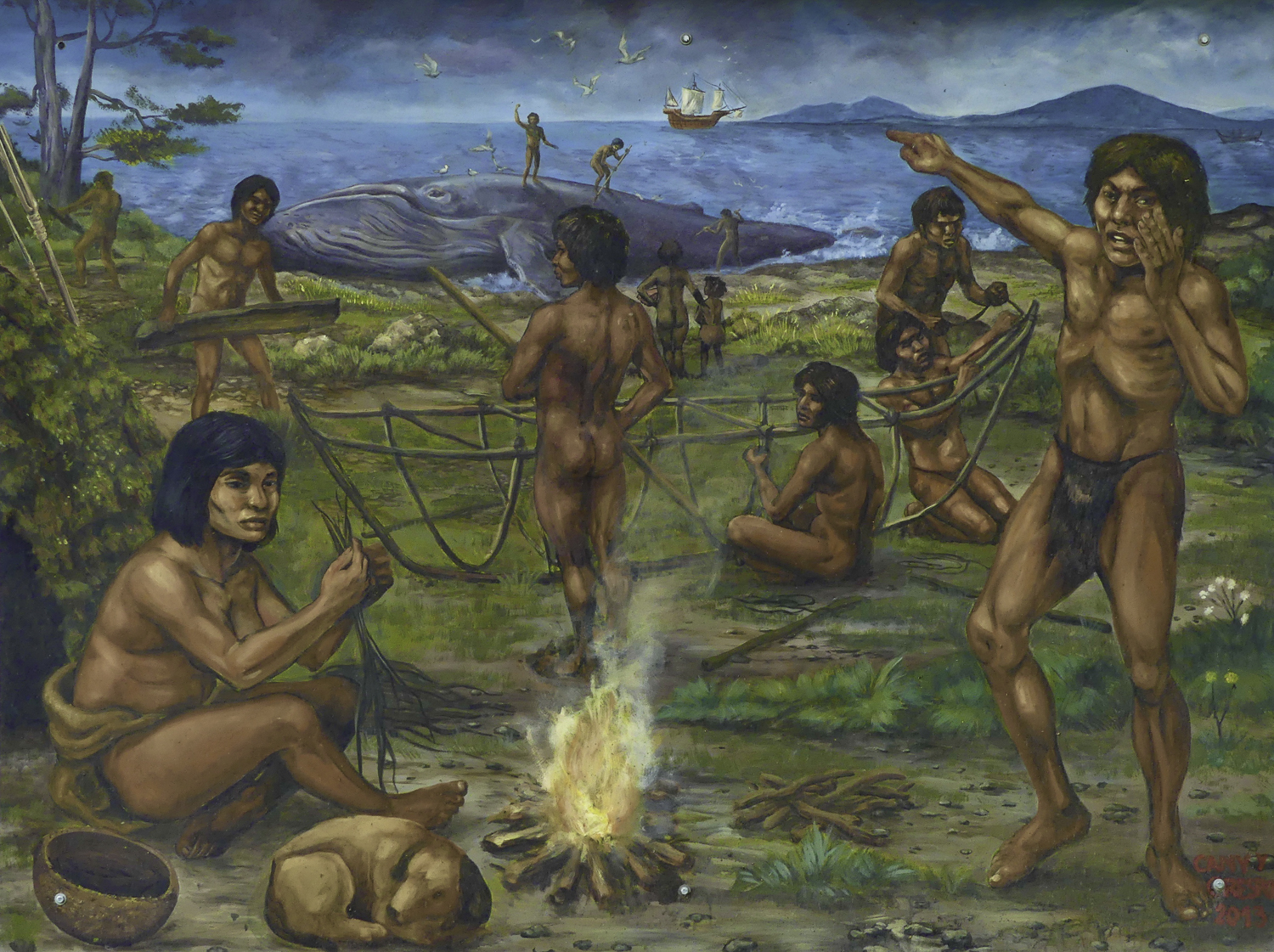 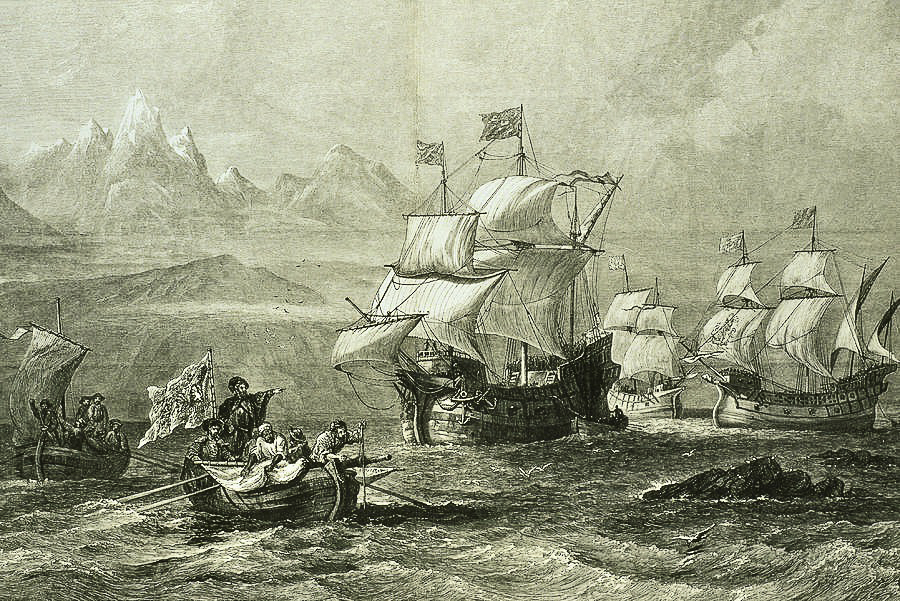