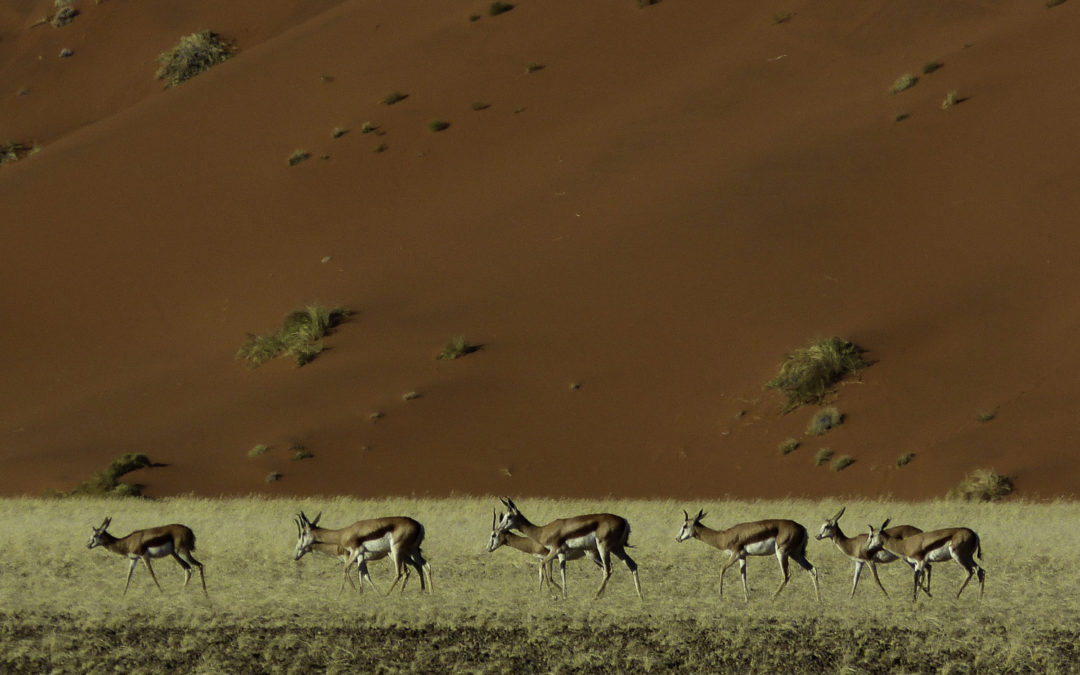 African biodiversity has been a recurring theme throughout this series of ePostcards. With this postcard, I offer a fresh photographic canvas for exploring biodiversity within a single family—the Bovidae (antelopes and buffalo). North American bovid species include the familiar American bison, mountain goat, bighorn sheep. The African bovids you may have seen in your own travels or on a trip to the zoo include the impala, eland, kudu, gemsbok (oryx), wildebeest, African buffalo, and springbok. I wanted to provide a generalized Bovidae “family profile” before I introduce you to my favorite African bovid—the springbok. All bovid species are ungulates (hoofed mammals), with two-toed hooves. Male bovids have two or more horns (not antlers), and in many species the females possess horns, too. The size and shape of the horns vary greatly, but the basic structure is always one or more pairs of simple bony protrusions without branches, often having a spiral, twisted or fluted form, each covered in a permanent sheath of keratin. The word “simple” doesn’t begin to describe the extraordinary elegance of these horns. Bovids are herbivores and have a four-chambered stomach, which classifies them as ruminants because of how they process and digest their food. One sidebar that fascinates me is the fact that the Bovidae evolved 20 million years ago, in the early Miocene, when they began diverging from the cervids (deer) and giraffids.

Springbok inhabit the dry areas of south and southwestern Africa, and are probably the best known and commonest of all southern African antelope. Slender and graceful, these long-legged antelope have a pair of black horns that curve at their tip, a white face with a dark stripe running from the eyes to the mouth, a light-brown coat marked by a reddish-brown stripe running from the upper fore leg to the buttocks across the flanks, and a white rump flap.They are named for their distinctive pronking display, which involves multiple stiff-legged leaps into the air (6 ft. or more), with the back bowed and the snow-white back stripe fanned, and white rump lifted. Pronking is thought to be a reaction to being chased, a distractive signal to potential predators that the springbok being chased is fit and agile. Springbok pronk in a variety of behavioral circumstances, however, so a broader interpretation might include signaling reproductive fitness or leadership status within the herd.

Versatile and adaptable, springbok will browse or graze, eating whatever food is available, including grass, shrub leaves and roots, pods, seeds and flowers. By feeding on succulent vegetation, springbok can live for years without drinking water. Active mainly at dawn and dusk, springbok avoid the hottest times of the day by seeking out a suitable shade tree. The shade-seeking herd I photographed was tightly packed but I could see that the group included both males and females. Breeding takes place year-round, and peaks in the rainy season, when forage is most abundant. A single calf is born after a five- to six-month-long pregnancy; lambs remain hidden in the grass for a few days after birth, freezing in place to avoid detection by jackals and other predators. Weaning occurs at nearly six months of age, and the calf leaves its mother a few months later. Female calves generally stay in their natal herds, but young males leave and join male bachelor groups after about 6 months. In the final photo, I’ll let you guess what might be attracting this rowdy, vocalizing group of fork-tailed drongos to this handsome ram. 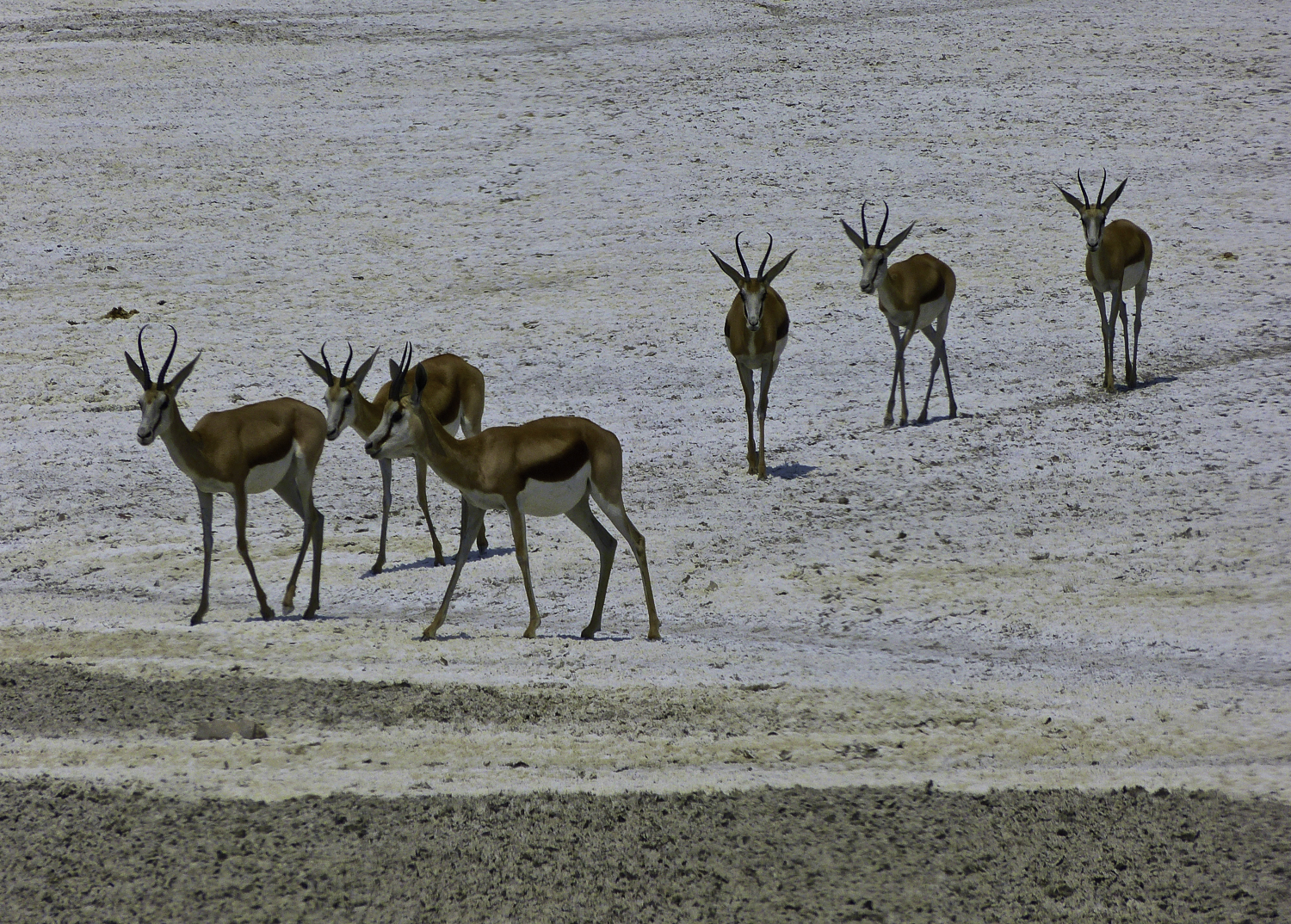 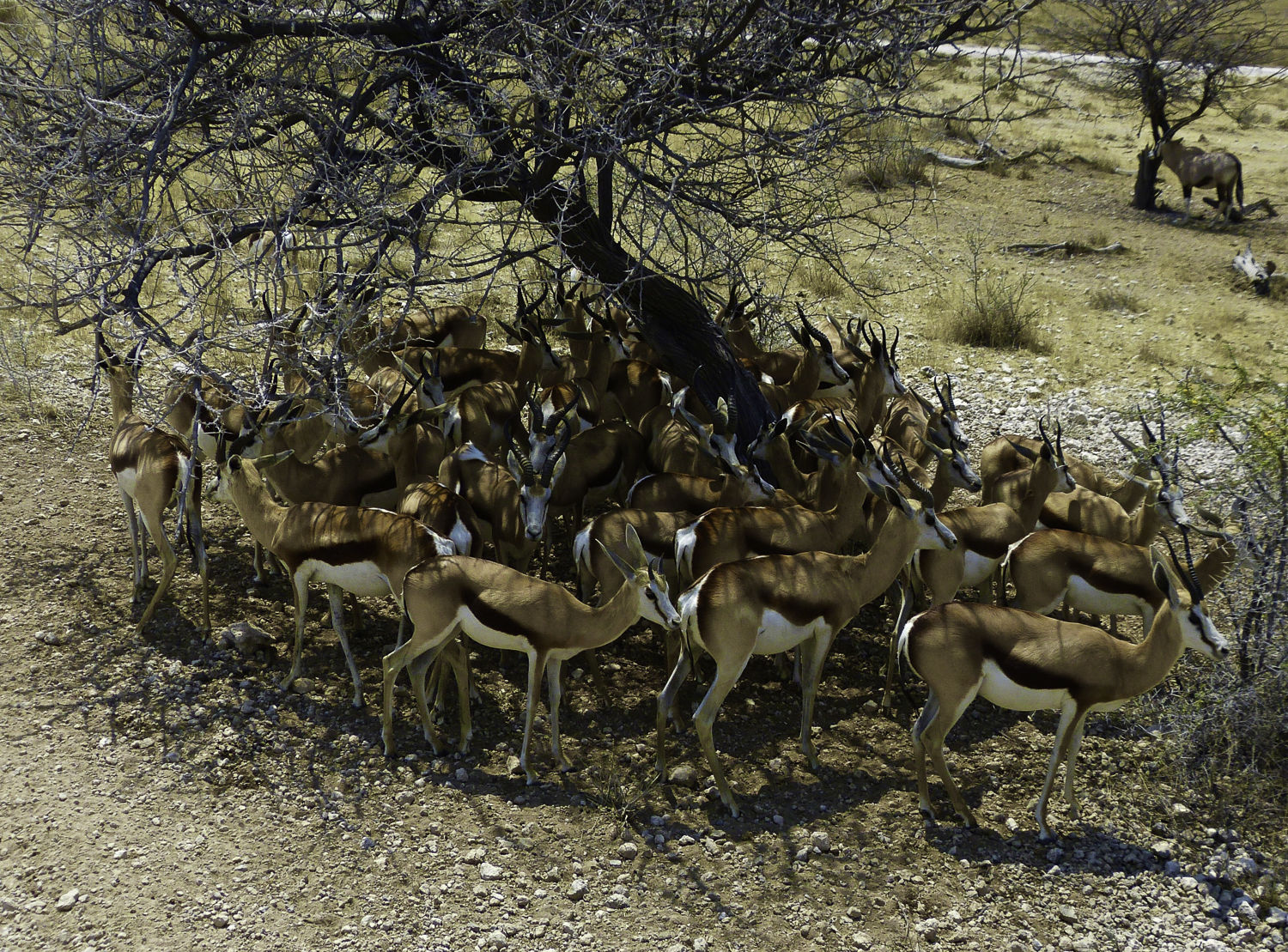 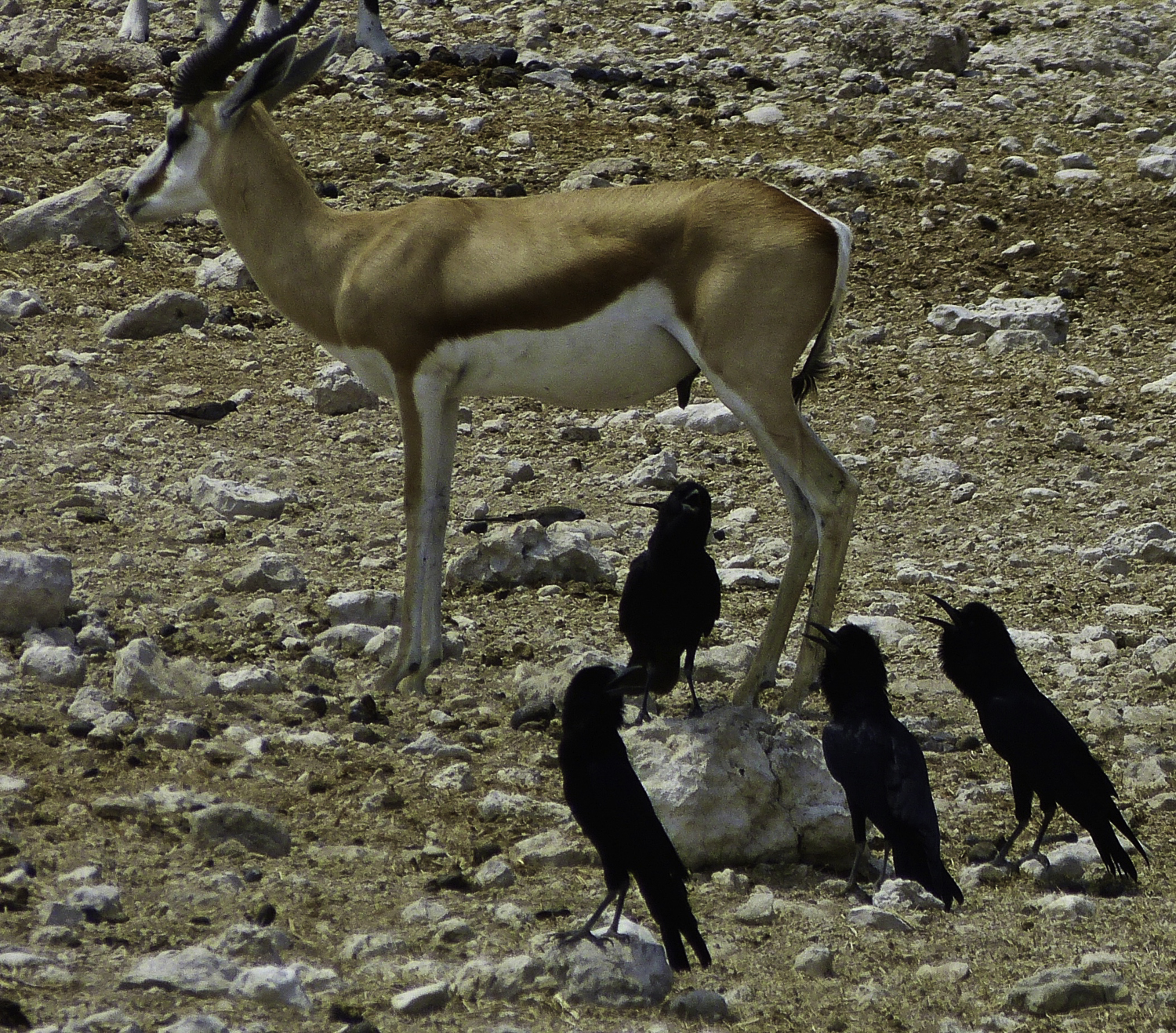