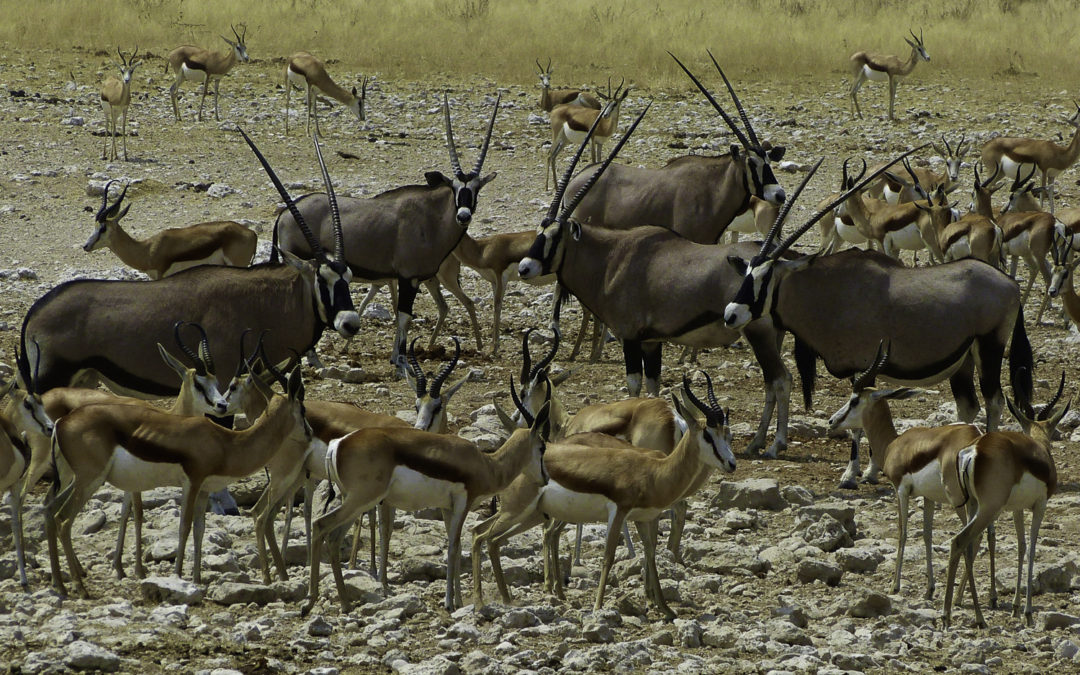 Settling in at the edge of Etosha’s salt-pan for a day observing the comings and goings of a diverse array of handsome bovids is a supreme luxury! The range of variability in size, fur color and patterning, diet, and social behaviors is simply stunning. Most bovids are diurnal, with feeding and social activities concentrated during the hours of dawn and dusk. Smaller bovids, like the dik-dik, are somewhat shy and solitary, preferring the tree and shrub thickets at the edges of the pan that offer cover and greater protection from predators. The larger bovids, like the gemsbok and the eland, are more gregarious and form herds of various sizes, with most species associated with savannas and open grasslands. I show only a few of the species I observed that day but each photo captures a moment in time and an opportunity to share a few of the strategies that enable these beautiful animals to survive in one of the harshest environments on earth.

Top of Page:
(1) Gemsbok (Oryx) and Springbok
The gemsbok’s beautiful face pattern, stocky build, and extremely long horns add visual drama to any mixed gathering of bovids at a waterhole. Surprisingly, the horns of the bull are shorter than those of the female, which average nearly 3 feet in length. The horns are used in territorial defense. Gemsbok herds are generally small, and territorial males will often join herds of other bovid species, such as these springbok.

Below:
(2) Black-faced Impala
These graceful antelope form mixed herds until the autumn breeding season, when territorial rams will herd the females and chase other males away. Territories are established before the breeding season starts, and are scent-marked with fore-head rubbing and secretions from interdigital glands between the hooves. Territorial fights are usually short and ritualistic, but can turn deadly in some instances. After a clash, the victor roars and the loser trots away. Lambing takes place within a short period in summer, when their is sufficient food for supporting growth and lactation. An impala lamb hides for a day or two after birth, joining the herd as soon as it can follow its mother.

(3) Kudu
Large and stately, these handsome antelope are also surprisingly graceful. As you can see here, bulls have massively spiraled horns and long-haired throat patch; females lack horns but both sexes have distinctive white facial markings, body stripes and large ears. The kudu is a secretive species, preferring wooded savanna which provides both cover and food. Herd composition changes seasonally, with bulls joining the herds for mating as the females become fertile. Calves are born at any time of the year (mostly in summer,) and will stay concealed for 2-3 months before joining their mothers in the herd.

(4) Eland
The eland is the largest of Africa’s antelopes and strongly gregarious, with a herd herd composition that varies seasonally. Mixed herds consisting of subadults and juveniles are joined by adult males and females during the breeding season. The large old bulls, like the one shown here, are dominant in the herd and have the breeding rights. After breeding the adults go their separate ways The cows rejoin the mixed herds before their calves are born.

(5) Damara Dik-dik
The dik-dik is southern Africa’s smallest antelope, averaging a mere 15 inches at its shoulder. The dik-dik’s small size makes it extremely vulnerable to predators, so it prefers densely vegetated habitats that provides good escape cover. At the first hint of danger, the dik-dik remains motionless, using its sensitive nose, big eyes and excellent vision to identify the source of the threat. As a last resort, when freezing in place fails, the dik-dik explodes into a high-speed, zigzag dash meant to distract the predator long enough to escape. Well-adapted to high temperatures and aridity, the dik-dik has an extended, proboscis-like snout and a nasal vestibule that enhances the evaporative cooling of its blood. While panting, the dik-dik conserves energy by reducing blood flow to its muscles. 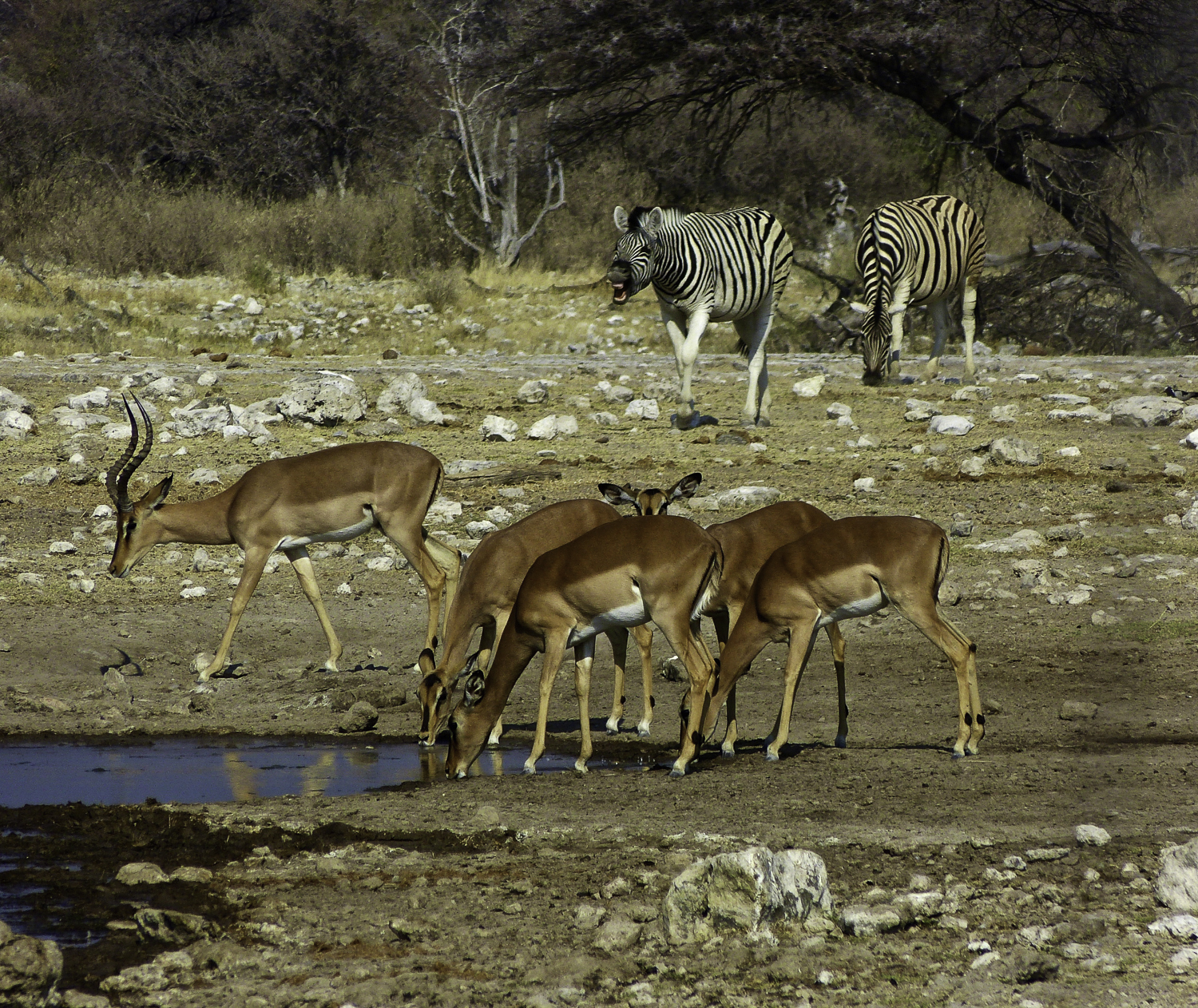 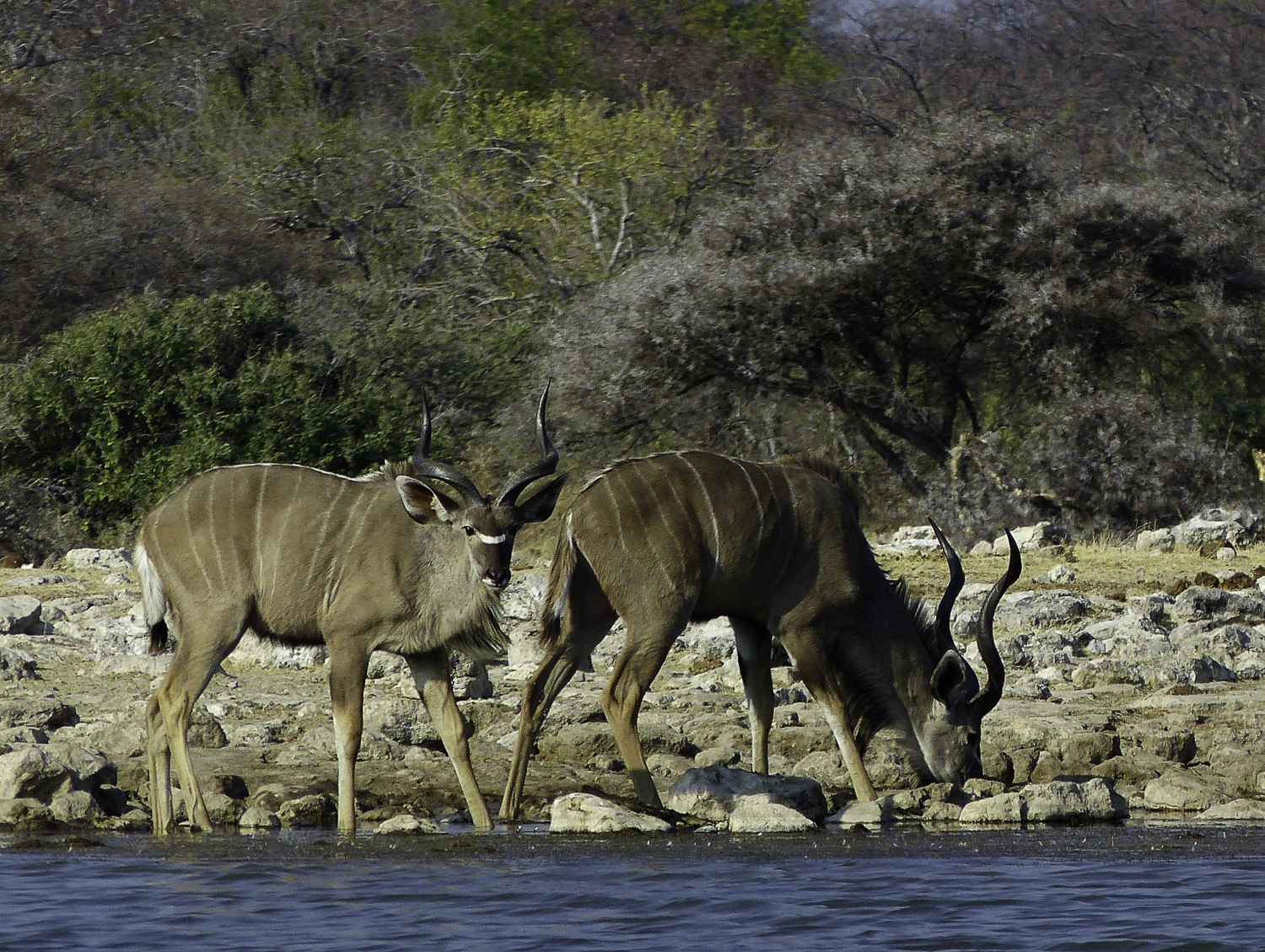 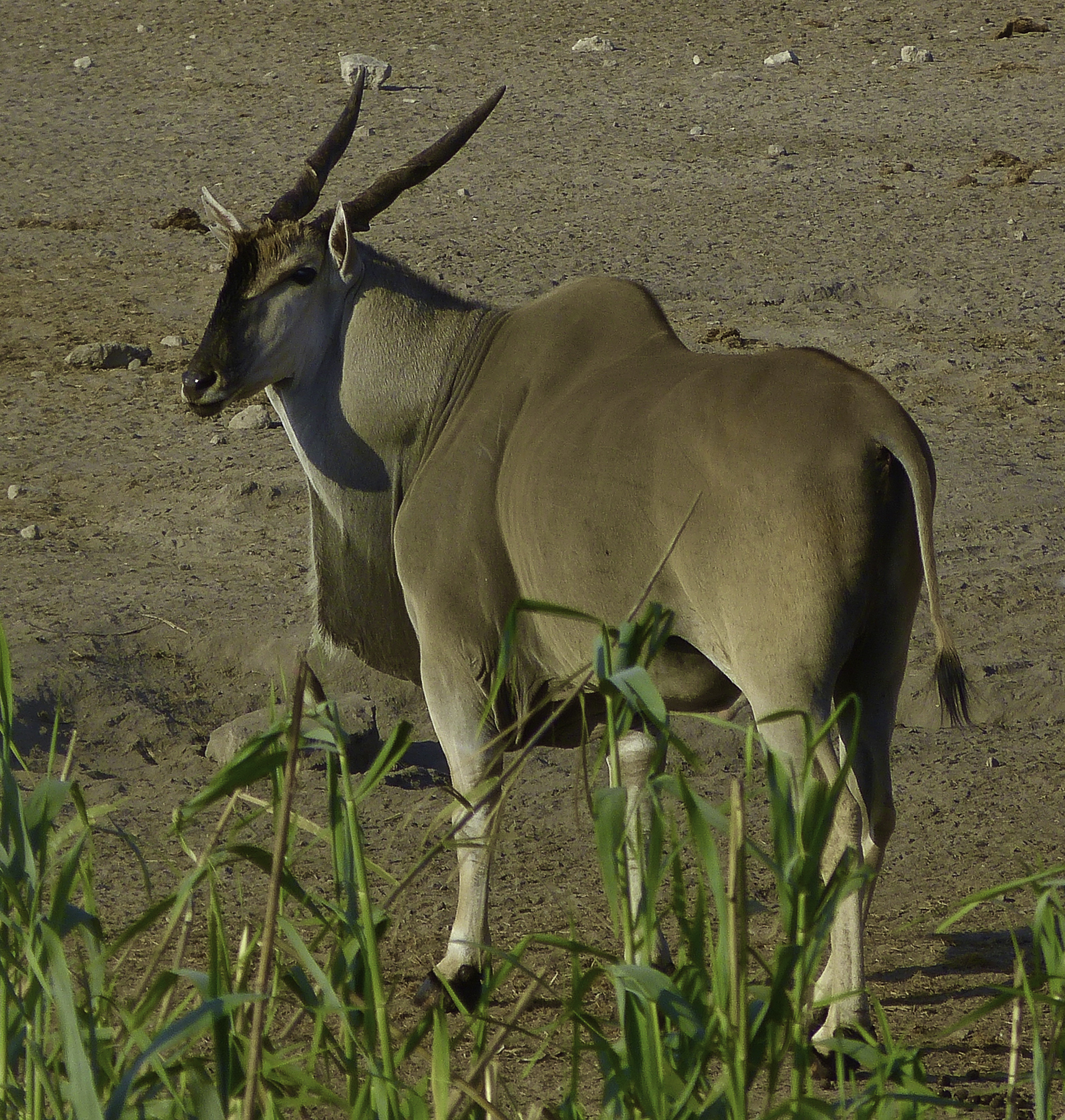 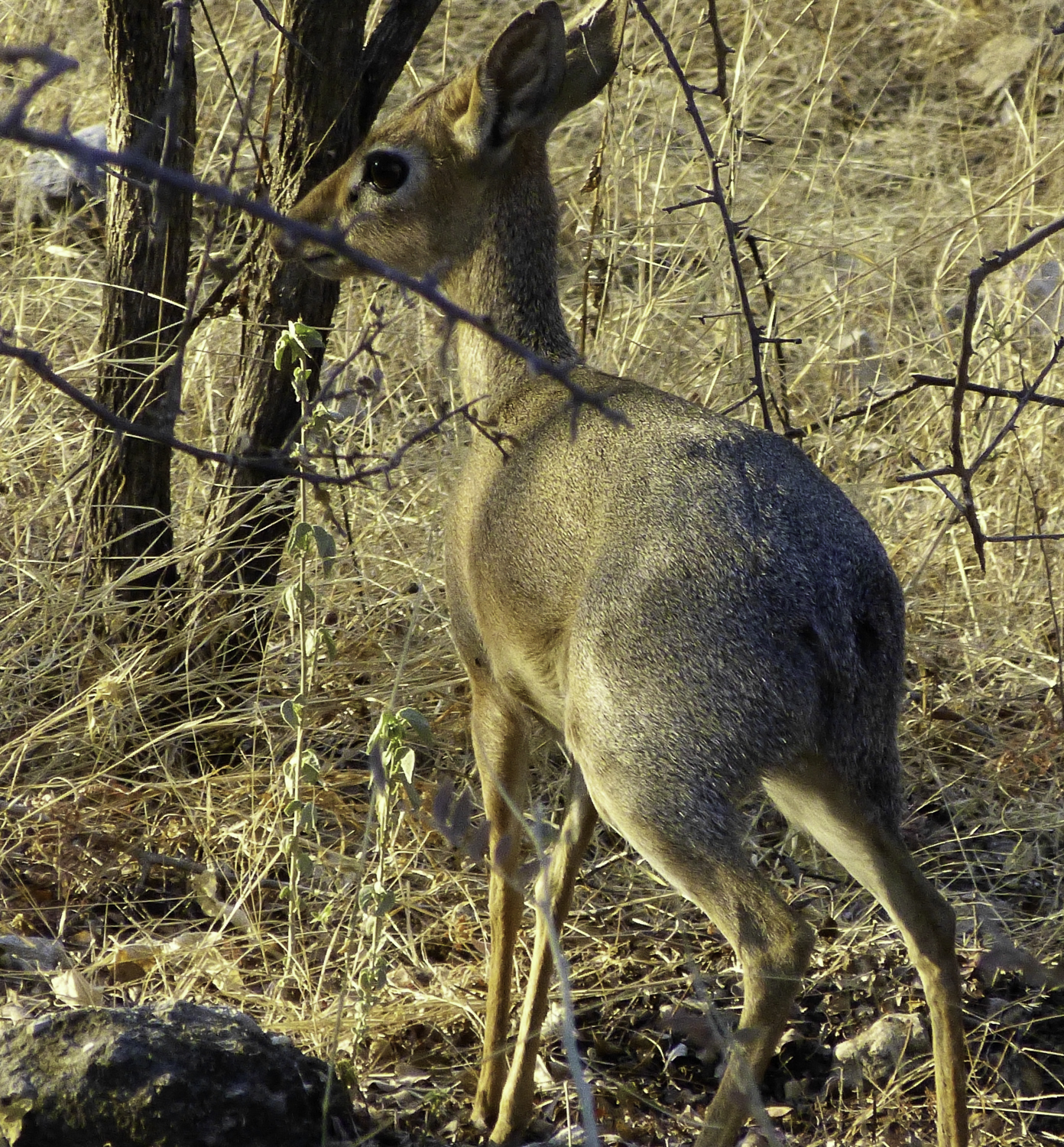