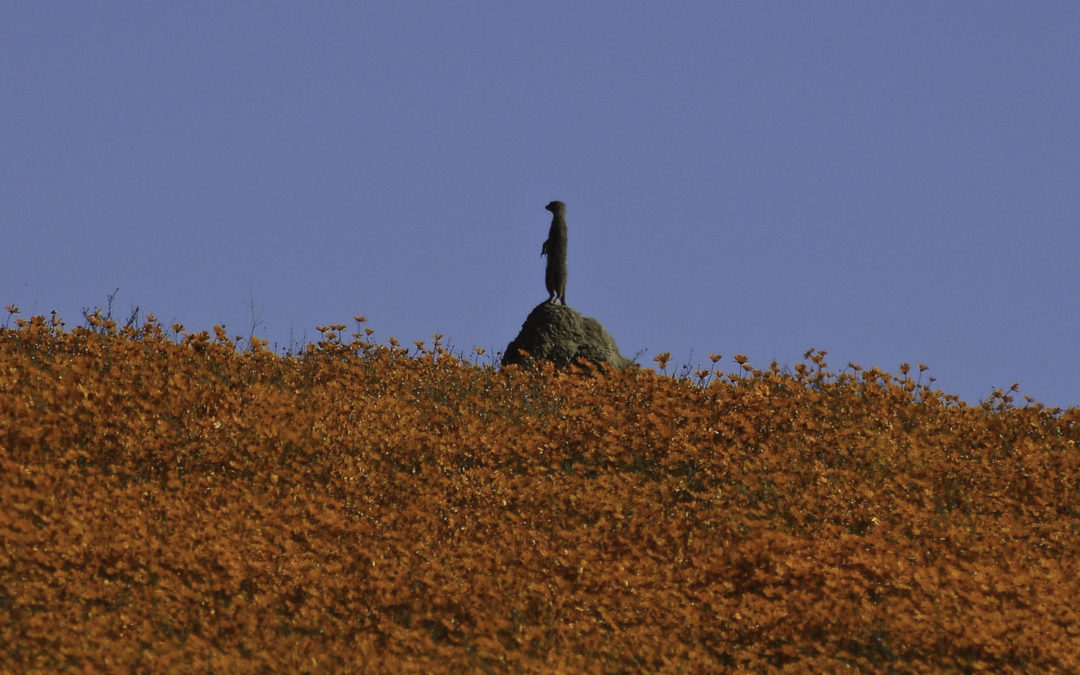 My fascination with meerkats goes back nearly fifty years. Spotting my first meerkat standing “sentinel” atop a termite mound in a sea of African daisies brought me to a standstill, binoculars raised. These fascinating mammals are members of the mongoose family, easily identified by their foot-long bodies, flattened ears, and their distinctive habit of standing upright, braced by their long tail and sturdy hind legs. Meerkats are among the world’s most social and cooperative mammals, living communally in large colonies numbering up to 40 individuals. It is no surprise, given their strong social bonds, that an extended family group of meerkats is called a “mob.” Colony members cooperate in digging their large burrow system, which consists of a complex of tunnels and rooms that remain cool in spite of the scorching African sun. Meerkats possess special adaptations that help them dig their burrows, including long claws, eyes equipped with a clear protective membrane that shields them from dirt, and ears that close tightly to keep dirt out.

Meerkats are omnivores and will eat insects, lizards, rodents, birds, and fruit. When hunting small animals, they work together and communicate with purring sounds. They also eat scorpions. Adult meerkats have some immunity to the venom, so scorpion stingers pose little risk. Instead of allowing their pups to learn by trial and error and risk a potentially life-threatening sting, mothers will cut the tail off a scorpion before feeding it to her young. Meerkats are diurnal and are a targeted prey species for small to medium-sized predators. By keeping watch over the colony, meerkat sentinels play a critical role by scanning for potential predators such as hawks and eagles, jackals, venomous snakes (cobras) and other opportunistic hunters. When standing sentinel, the meerkat’s eyes give them a wide angle view of their surroundings and the dark patches around their eyes help to reduce sun glare distraction, much like when a baseball player smudges dark lines beneath their eyes. Once a predator is spotted, the sentry will give out a very loud warning bark, alerting its group to run for cover in their burrows. The sentry will be first to re-emerge and will be the one who determines when it is safe for colony members to leave their burrows, with a few adults remaining underground as babysitters for the pups. In certain situations, a mob of meerkats can scare off formidable predators like jackals or cobras. Meerkats are able to spot a soaring eagle a thousand feet up, which explains why young meerkats dive into their burrows when airplanes pass overhead.

Within the meerkat colony, family groups are led by an alpha pair, with the female being the most dominant. Most of the group members are either children or siblings of the alpha pair. The dominant couple (and subordinate pairs) will produce two to four babies a year in one of the group’s burrows. The babies, called pups, weigh around 1 ounce at birth and are blind, deaf and almost hairless. Other group members will babysit the pups, even suckling them when needed. Because survival of the pups is vital to sustaining their social unit, meerkats have been known to risk their lives trying to protect the young. The whole family, including the father and siblings, pitches in to help raise the pups, teaching them to play, forage, and to be alert to predators. By nine weeks, the pups are weaned, and by about 18 months the young meerkats will be mature enough to breed and have their own offspring. 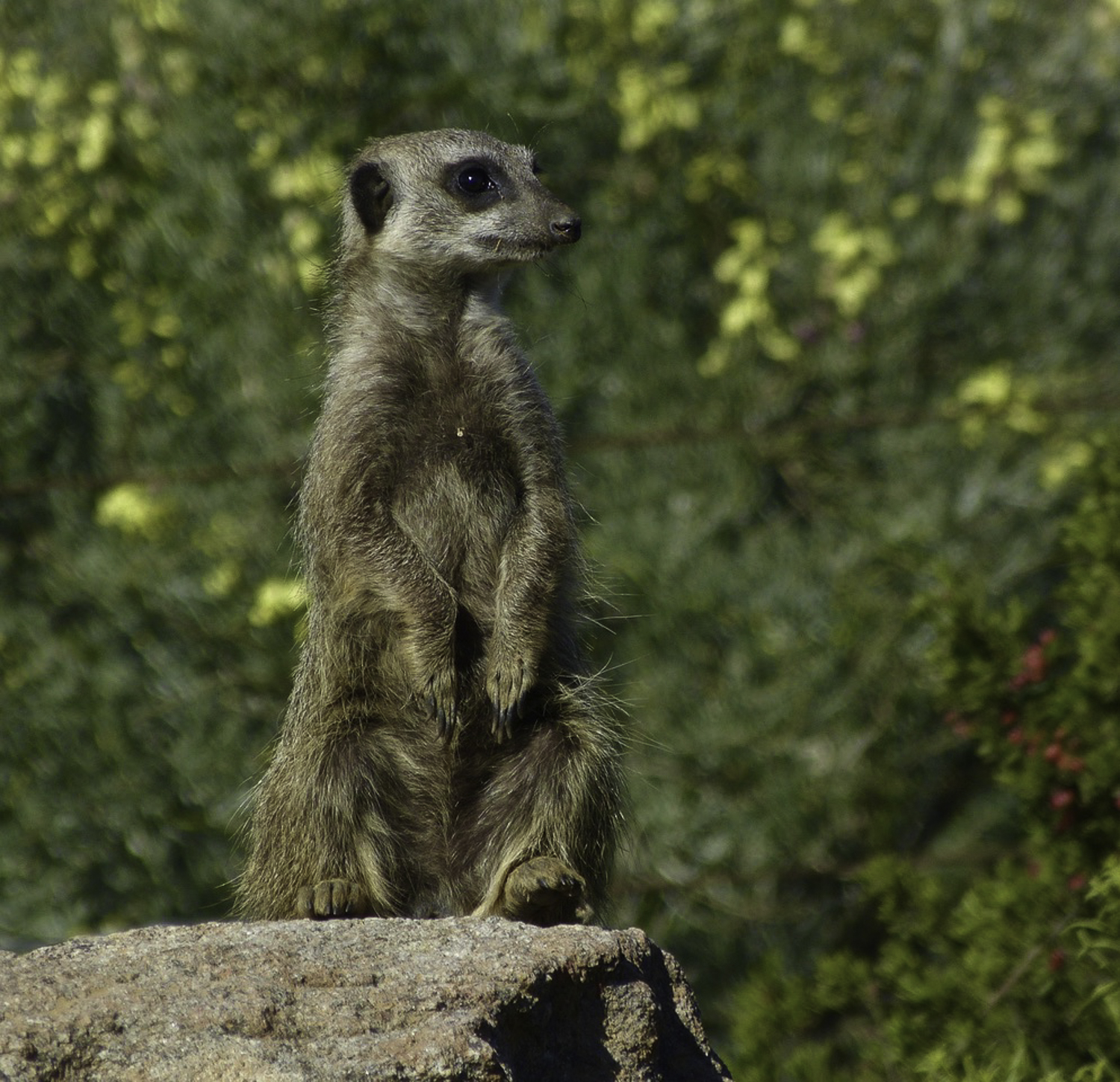 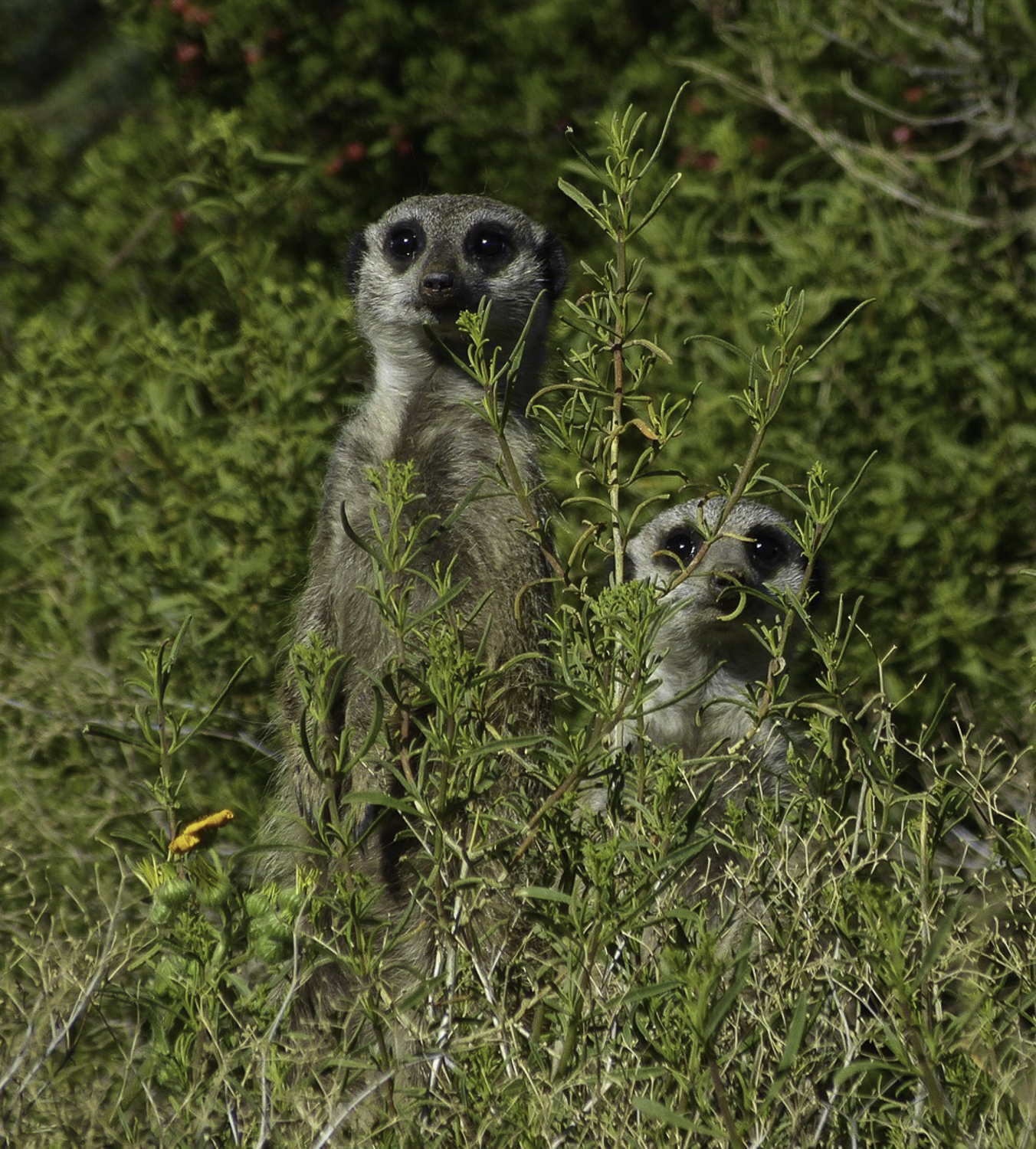