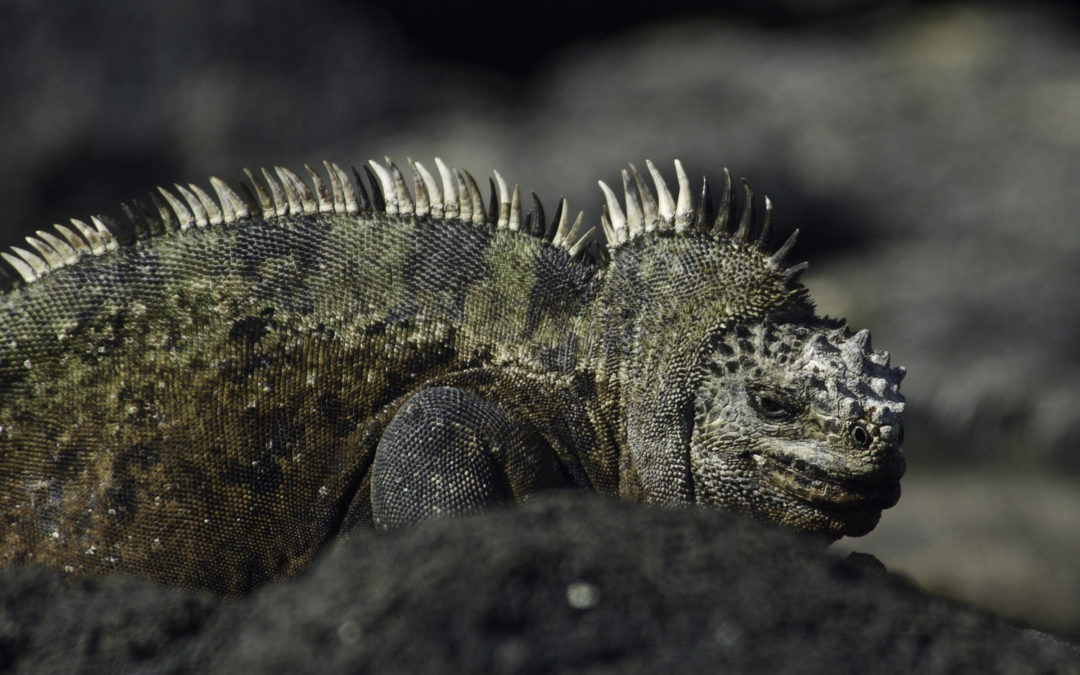 We begin our Island Biodiversity ePostcard series with a sailing schooner voyage to the Galapagos Islands aboard the S/S Sagitta—a dream come true for any naturalist. The Galapagos Archipelago, a scattering of small volcanic islands located some 600 miles west of mainland Ecuador, is perhaps the most famous symbol of island biodiversity in the world. The Galapagos were officially discovered —quite by accident—in 1530, by Fray Tomas de Berlanga, the Bishop of Panama, when his ship’s course was diverted westward by the strong Humboldt Current. Although Fray Tomas found these islands to be too dry to be inhabitable, his fascination with the giant land tortoises he encountered there inspired him to give the islands their name—the Galapagos (Spanish for “tortoises”). The archipelago’s best known explorer, Charles Darwin, visited the Galapagos aboard the H.M.S. Beagle in 1835. Darwin’s keen observations and collections, most notably focusing on 13 species of Galapagos finches, would eventually provide the basis for his pioneering theory of evolution. As you might imagine, the Galapagos Islands have no shortage of fascinating animals to photograph and write about and, with the first few ePostcards in this series, I will introduce you to some of Darwin’s Galapagos Island favorites.

There are few places on earth where reptiles dominate terrestrial and marine landscapes as they do in the Galapagos Islands, where you find both marine and land iguanas and giant tortoises. When you are watching marine iguanas, which are endemic to the Galapagos, it’s easy to let your imagination backtrack many eons, to the Age of Reptiles. The largest of these marine iguanas approach 4.5 feet and weigh close to 20 pounds. They are impressive swimmers, a behavior that has made them far less vulnerable to predation threats on land or in the water. Land iguanas, which often exceed 3 feet in length, have suffered profound population declines due to impacts associated with the influx of humans, rats, pigs, feral dogs and goats. It is not known when the first immigrant iguanas arrived in the Galapagos, but reptiles are excellent island colonists when the opportunity presents itself. The ancestral iguana species is not known with any certainty, but it remains possible that the widespread common iguana of Central and South America might have played this role, perhaps “rafting” on a mat of vegetation and transported seaward by the Humboldt Current. The original colonization event might have occurred several million years ago, or as recently as 10,000 years ago. In any event, it is important to remember that evolution can take place rapidly, especially in small isolated populations, and apparently it has, to allow these unusual reptiles to occupy two extraordinarily different niches. Iguanas are herbivores and you should note that the marine iguana is nibbling seaweed, its primary food.

The Galapagos fur seal, endemic to the Galapagos Islands, is the smallest member of the eared seal family (the otarriids; sea lions and fur seals), and the only fur seal that breeds in tropical latitudes. Sea lions and fur seals have external ear flaps, in contrast to the simple ear openings of the true seals, and have very strong front limbs that enable them to move about on land much better than the true seals. There are two types of eared seals in the Galapagos, the larger Galapagos sea lion, a subspecies of the California sea lion, and the Galapagos fur seal, which is the smallest of all the eared seals. Both are essentially endemic to the Galapagos. Although similar in overall body shape, the fur seal is smaller, with a much furrier pelt (no lion-like mane), and very large eyes, which are considered an adaptation for nocturnal hunting for fish and squid. Both Galapagos eared seal species are closely associated with the cool, upwelling waters that surround the islands. Both species are thought to have come to the Galapagos from opposite hemispheres, possibly during glacial times, when the waters were cooler. During El Nino years, the upwelling systems fail and the near-surface waters warm substantially, disrupting and impoverishing the regional food chain. As a consequence, pup survival is extremely poor in some years. The Galapagos fur seal is thought to be nonmigratory, remaining in the Galapagos and surrounding waters as a year-round resident. 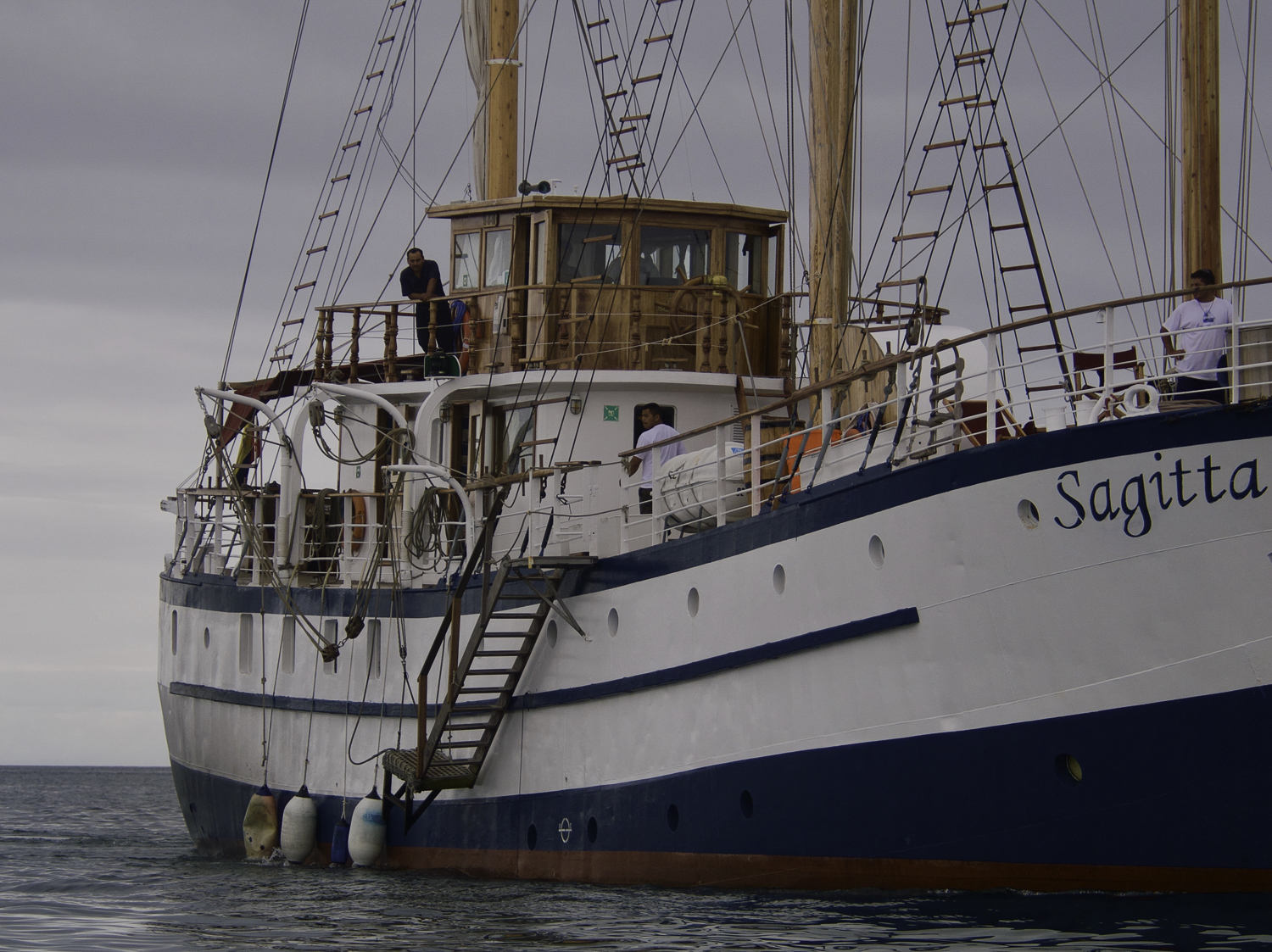 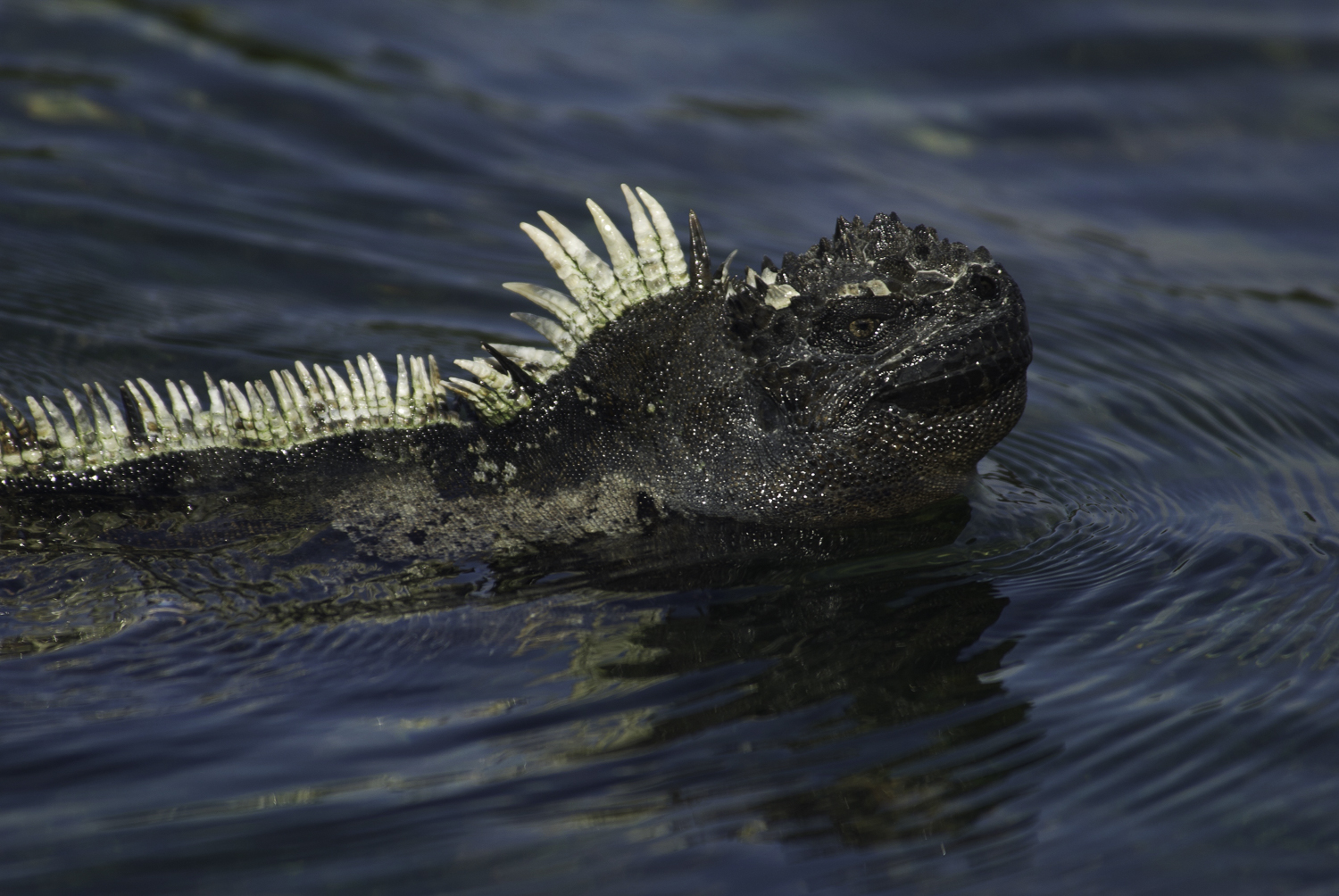 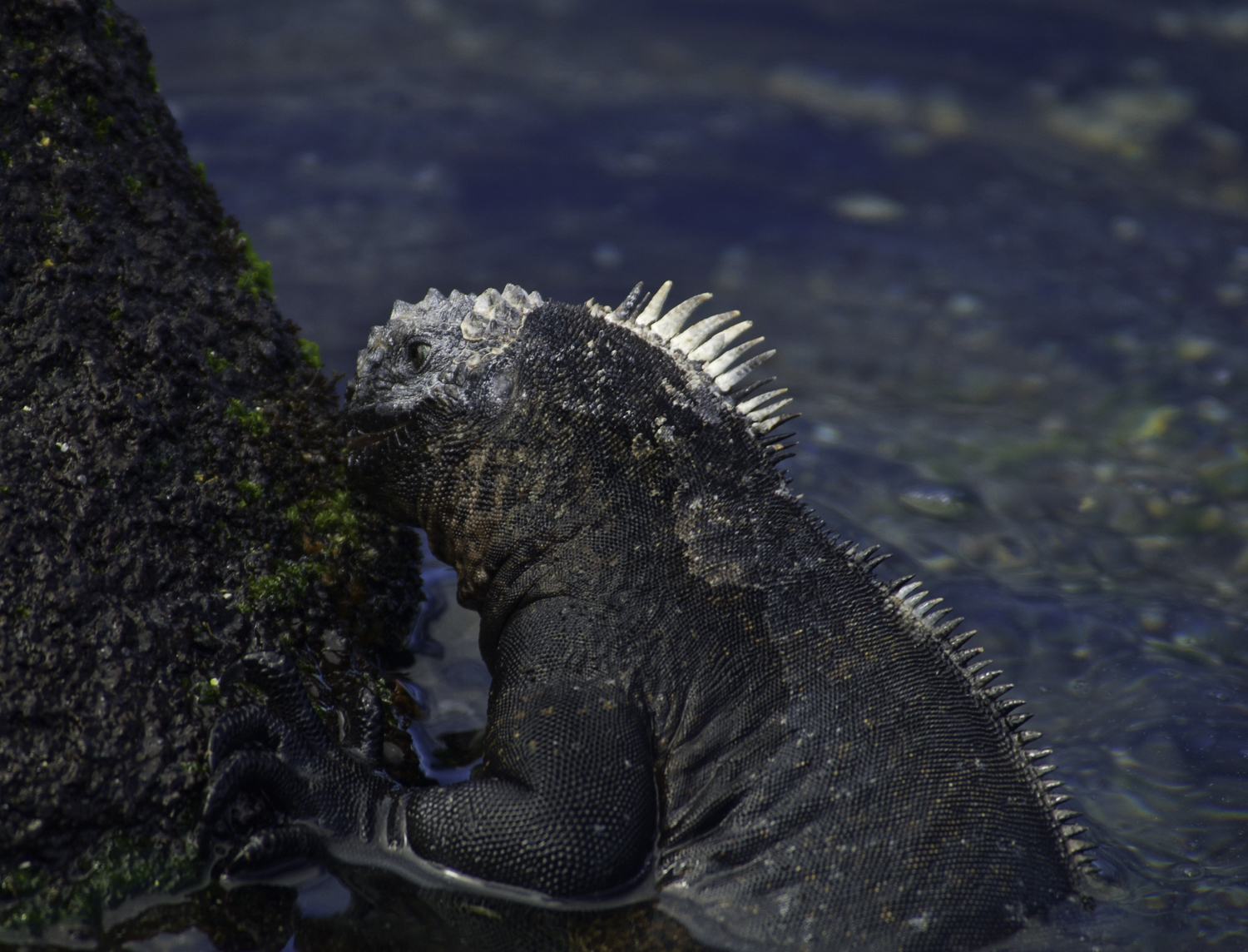 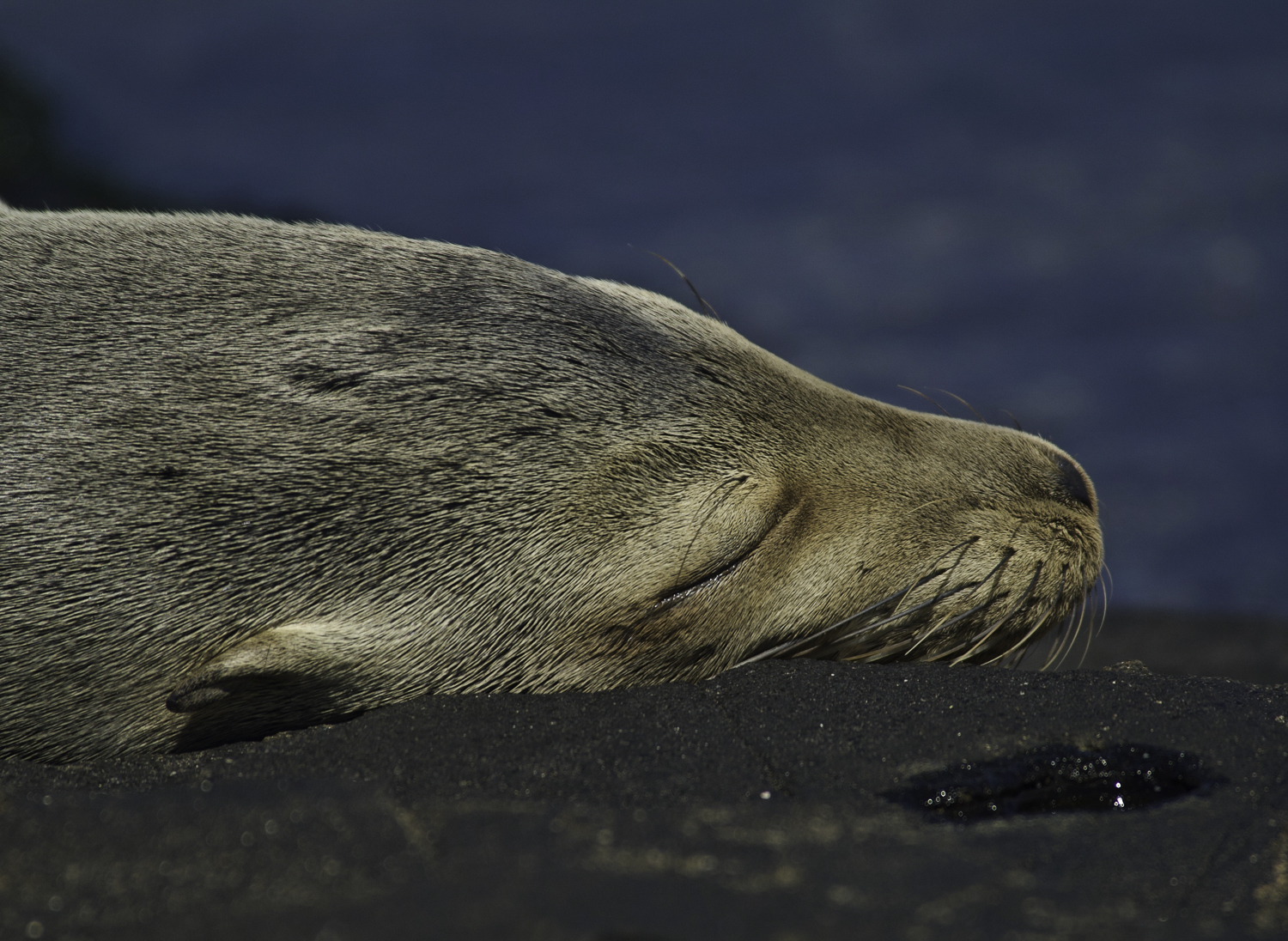 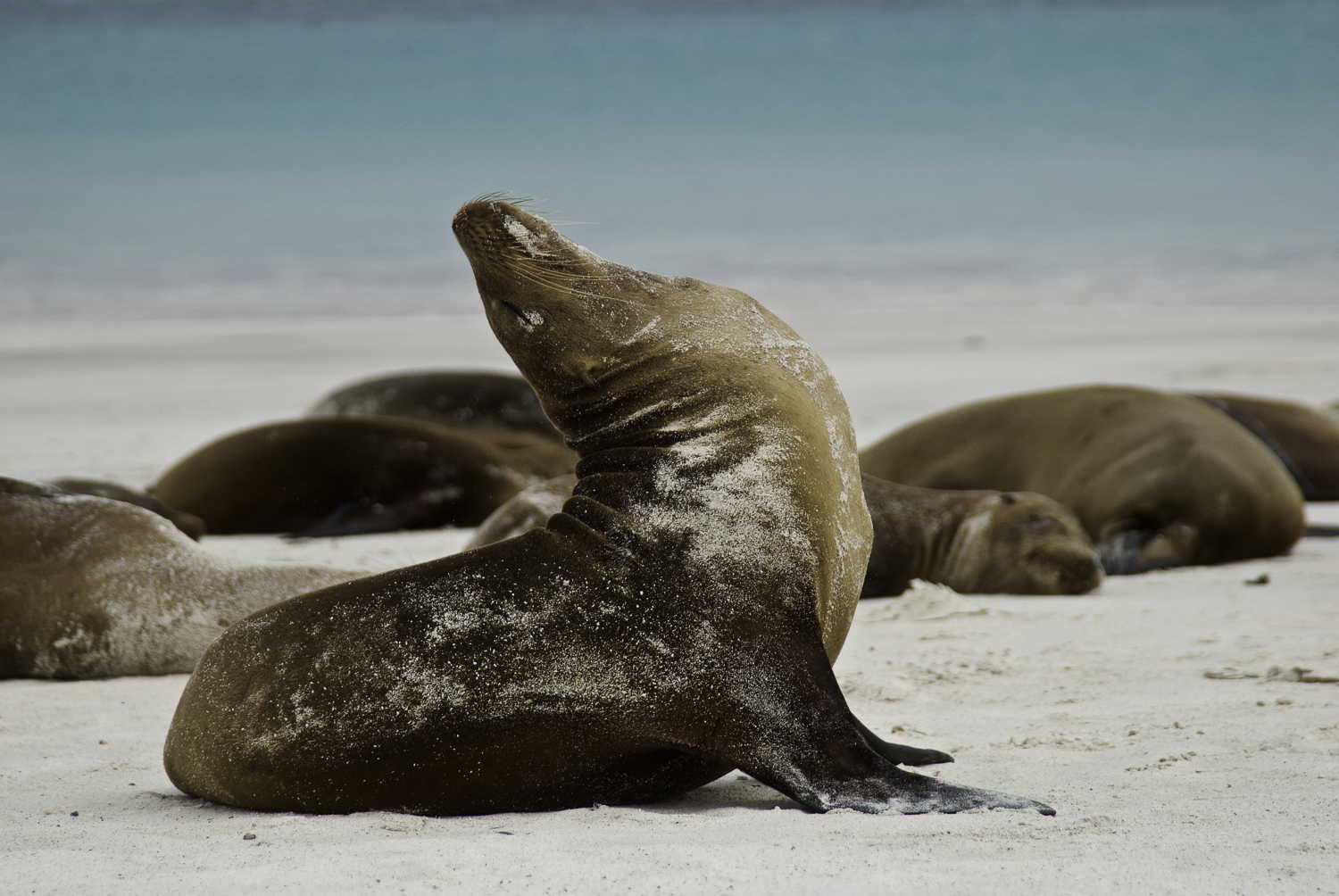 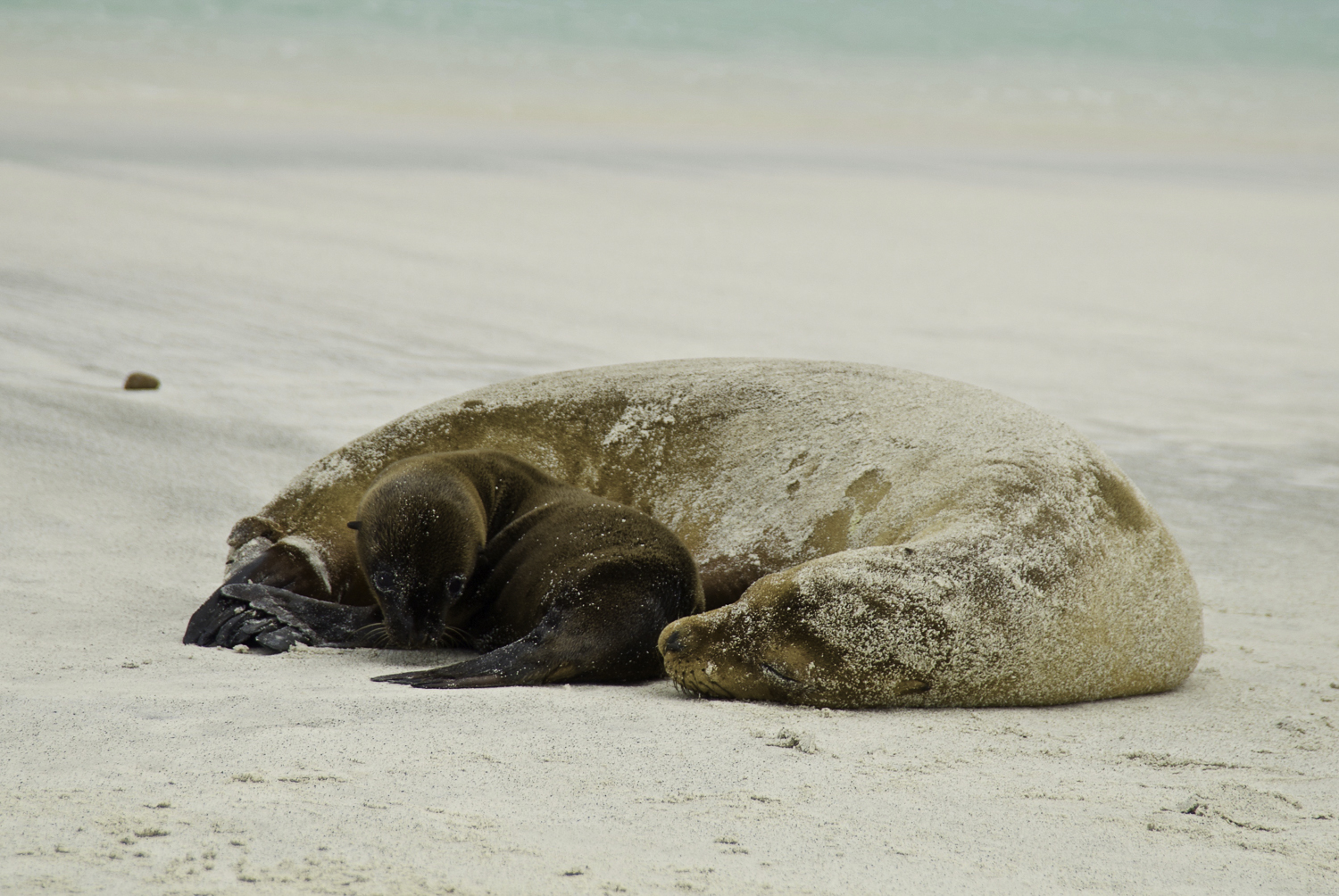