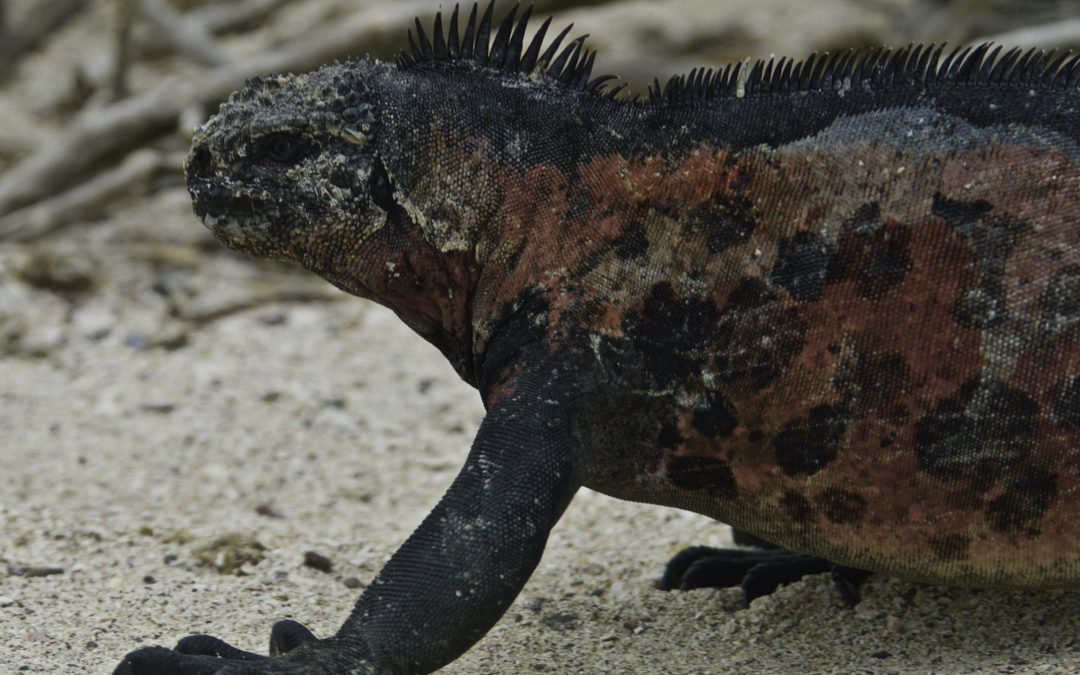 The color red—bold and eye-catching in plants and animals—provokes our curiosity as naturalists in ways that few other colors do. Exploring the evolution and science behind how animals perceive color in their world is beyond the scope of our ePostcards, but I can’t resist touching on a few of the things I find fascinating about the color red. The majority of colors we see in the natural world arise from the way that different types of pigments, each with a unique chemistry, react with light. Depending on their chemistry, pigments absorb certain wavelengths of light, leaving the remaining reflected wavelengths to make up the colors that we see. Animals acquire color-producing pigments in two ways: They can “manufacture” the pigment from simple compounds available within their own bodies, such as amino acids and fatty acids, or they can consume plants or animals that already contain these pigments. The pigment melanin (blacks, browns and other dark colors) is made from the building blocks of proteins called amino acids, which the animal acquires from its food. Carotenoid pigments (bright reds, oranges, and yellows), in contrast to melanin, cannot be synthesized in the animal’s body and must be transported as “intact” molecules through the circulatory system to the areas of the body where the pigment will be used (skin, shell, carapace, bills, or feathers).

Animals (vertebrates and invertebrates alike) use pigmentation for a variety of purposes, including protection (camouflage, mimicry, or as a warning), to attract mates and signal breeding readiness, to display individual fitness, fend off rivals or, in the case of melanin, to protect the skin tissues from ultraviolet radiation. Where red and dark orange hues appear in nature, they clearly convey an important message. Let’s look at a few examples from the Galapagos that caught my attention.

Isla Espanola boasts the most colorful marine iguanas, with blotches of red and coppery green patterning the dark gray skin. Marine iguanas are herbivores that feed primarily on marine algae. The red pigment comes from a particular seaweed common during the summer months, which also coincides with the iguanas’ mating season. The endemic lava lizard is common on several of the western islands in the archipelago. Males are blue gray to brownish, and have dark cross bands on the neck and anterior portion of the back. The male’s throat has a large black blotch, extending to the base of the forelimbs. Females, as my photo shows, are largely unmarked or have light speckles, and lack the dark crossbars of males. Adult females lack the black throat blotch of males, and instead have a distinctive “cheek patch”: a blotch of salmon, orange, or brick red extending from the base of the front legs to the snout, and up to the eye. The cheek patch appears as females attain reproductive maturity.

Sally lightfoot crabs are ravishing and unmistakable in color and behavior, with the intense red shell of the adults the most striking characteristic of all. Juvenile crabs have darker coloration with red spots, which clearly provides greater camouflage against the charcoal-hued lava rocks of the intertidal zone. Every time the young crabs molt their shell, the red spots enlarge incrementally until the shell becomes completely red at the adult stage.

Both the great frigatebird (seen here) and the magnificent frigatebird occur in the Galapagos, but the great frigatebird is by far the most common. The most “expressive” characteristic of adult frigatebirds is the brilliant red gular (throat) sac of the breeding males. Although the sac is hardly visible when not inflated, when the red sacs are ballooned with air in full display mode, the advertisement of male breeding fitness is unmistakable. Displaying great frigatebird males perch conspicuously on a small tree or bush, fully inflate their gular sacs, spread and shake their wings, look skyward, and emit a high-pitched, oscillating whinny to one and all.

The swallow-tailed gull, in my view, is one of the most beautiful gulls in the world. Breeding adults are mostly pearly gray with a black head, beadlike red eye ring, pinkish legs, and a pale-tipped bill with a white spot at the base. Outside the breeding season, the head is white and the eye ring is black (not red). This gull’s main breeding location is in the Galápagos Islands, particularly the rocky shores and cliffs of Hood, Tower and Wolf Islands, but it spends most of its non-breeding life flying and hunting over the open ocean. The swallow-tailed gull is the only fully nocturnal gull and seabird in the world, preying on squid and small fish that rise to the surface at night to feed on plankton (their pigment source). In order to see while hunting for food at night, the swallow-tailed gull’s eyes are larger in size and volume than those of any other gull. They also possess a tapetum lucidum in the back of the eye that reflects light back through the retina, increasing the amount of light available to the photoreceptor cells.

The American Oystercatcher bird is found all along the Pacific coast and in some areas of the Atlantic Ocean. In the Galapagos, they are found in the intertidal zone on most of the islands, with a breeding population of about 400 pairs. These beautiful black and white, counter-shaded shorebirds have a distinctive red eye ring, a bright reddish-orange bill, and pale pink legs. The name “oystercatcher” comes from their amazing ability to use their bill as a structurally-reinforced tool to pry open bivalves, effectively cutting the adductor muscles in order to get at the meat inside. Note that the oystercatcher chick is dressed, appropriately, in camouflage plumage. 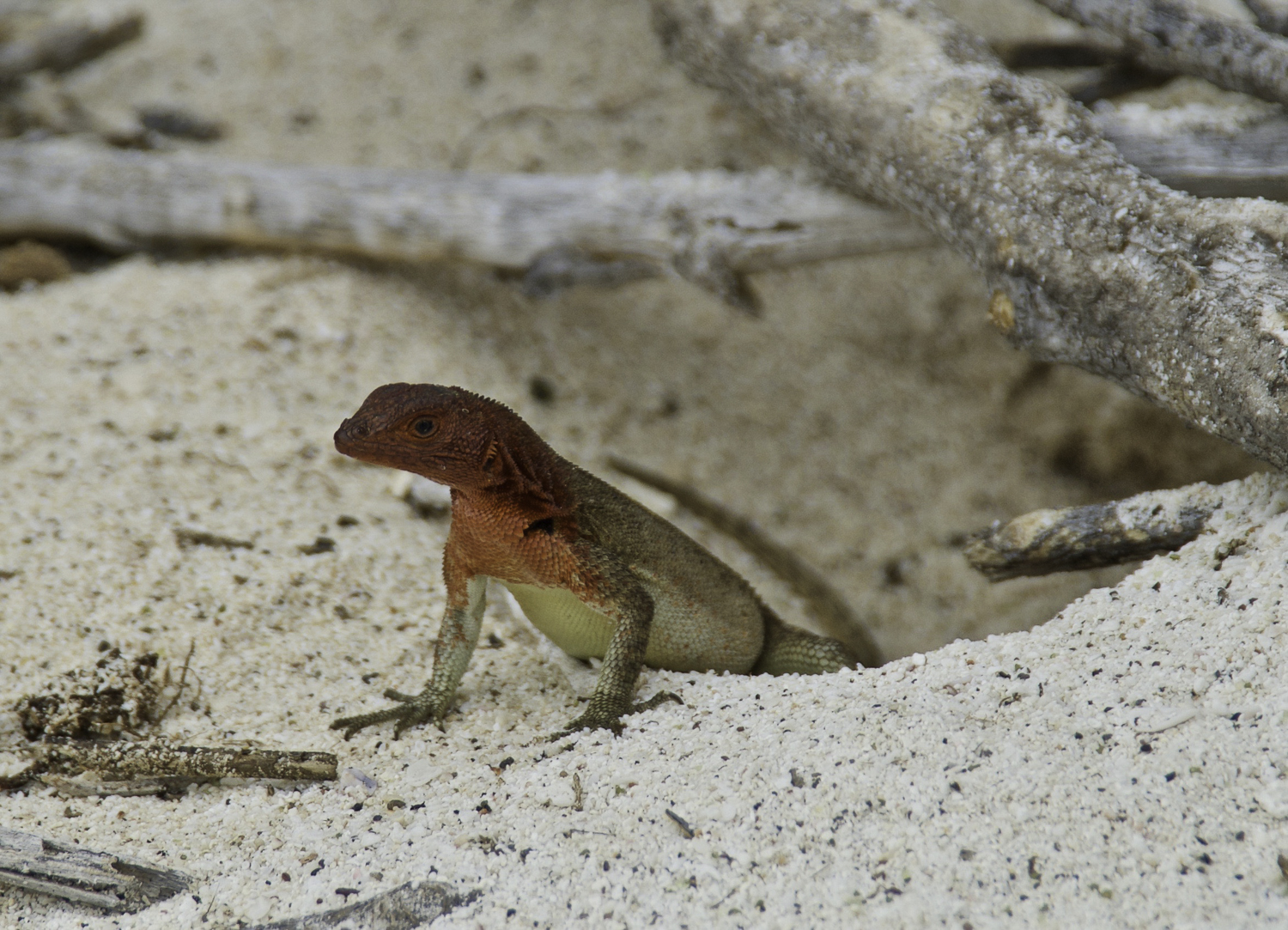 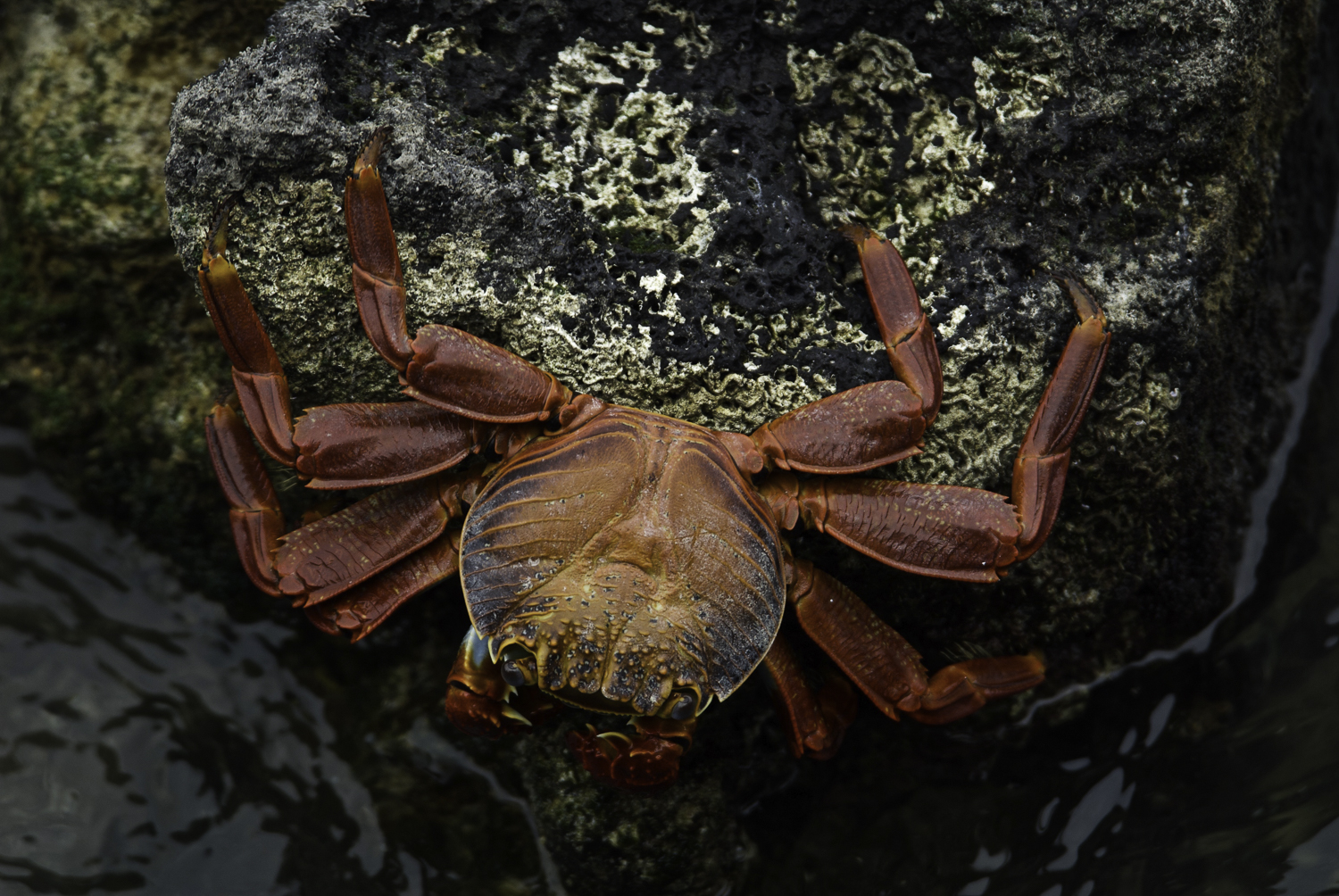 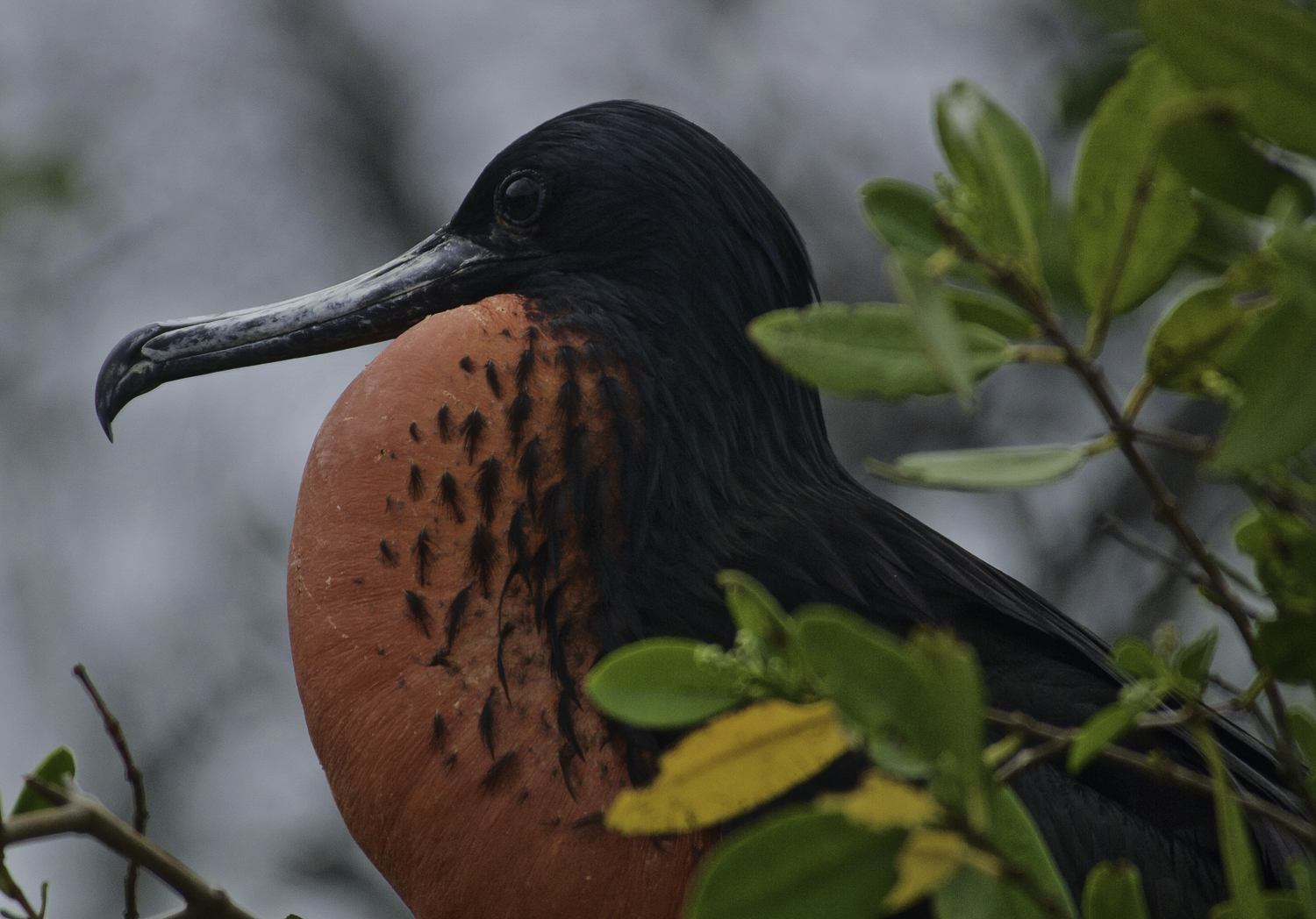 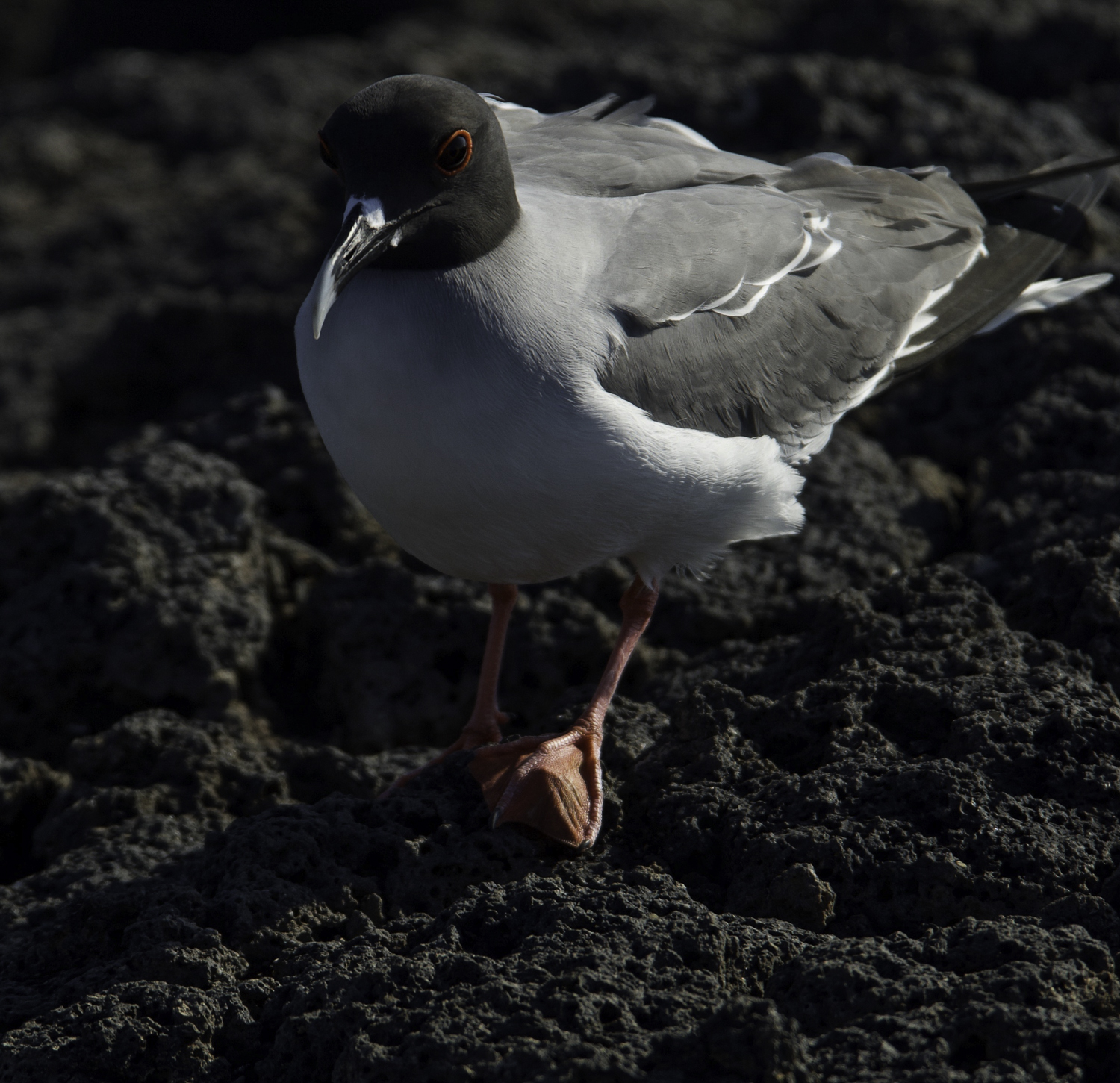 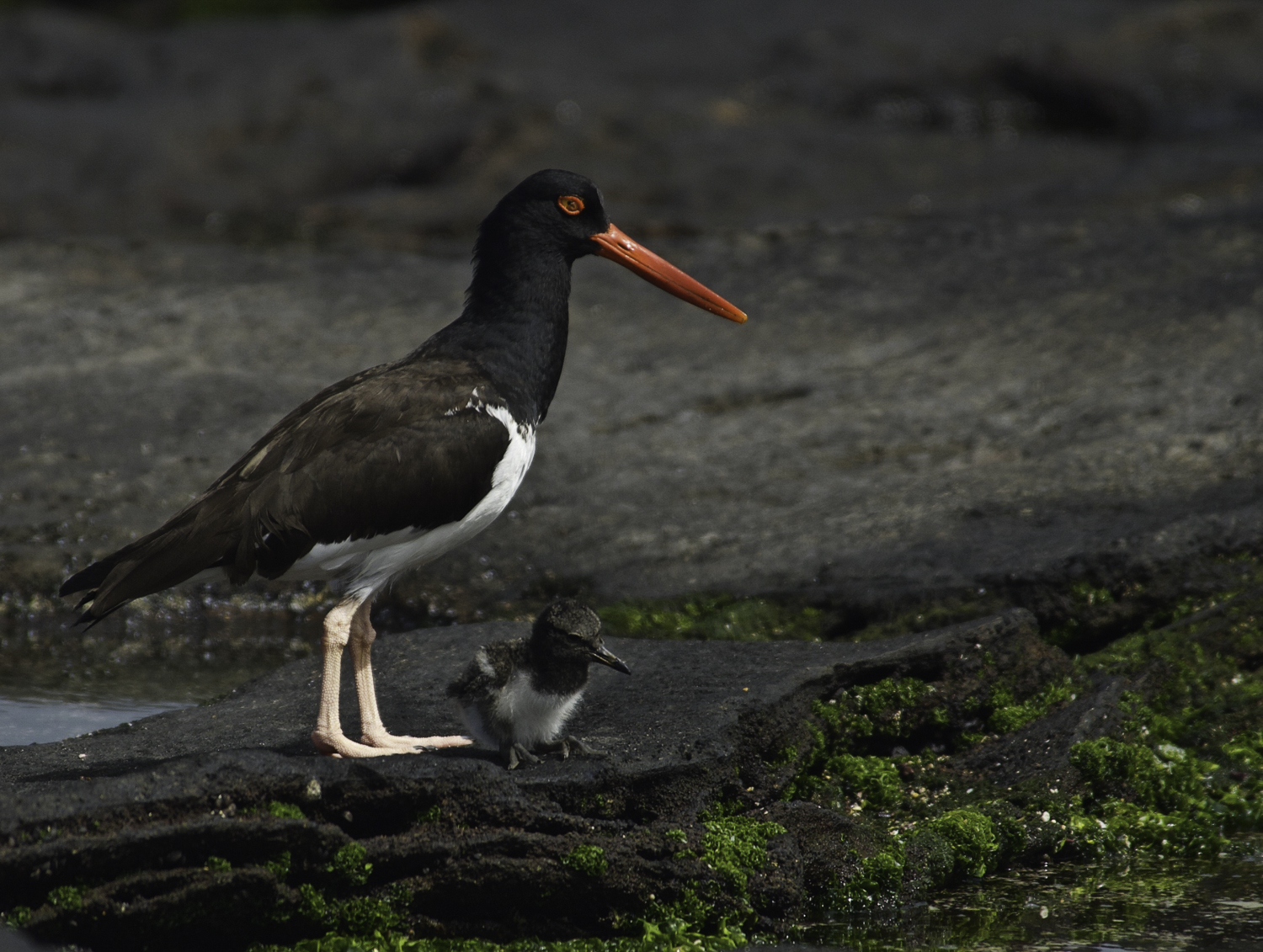