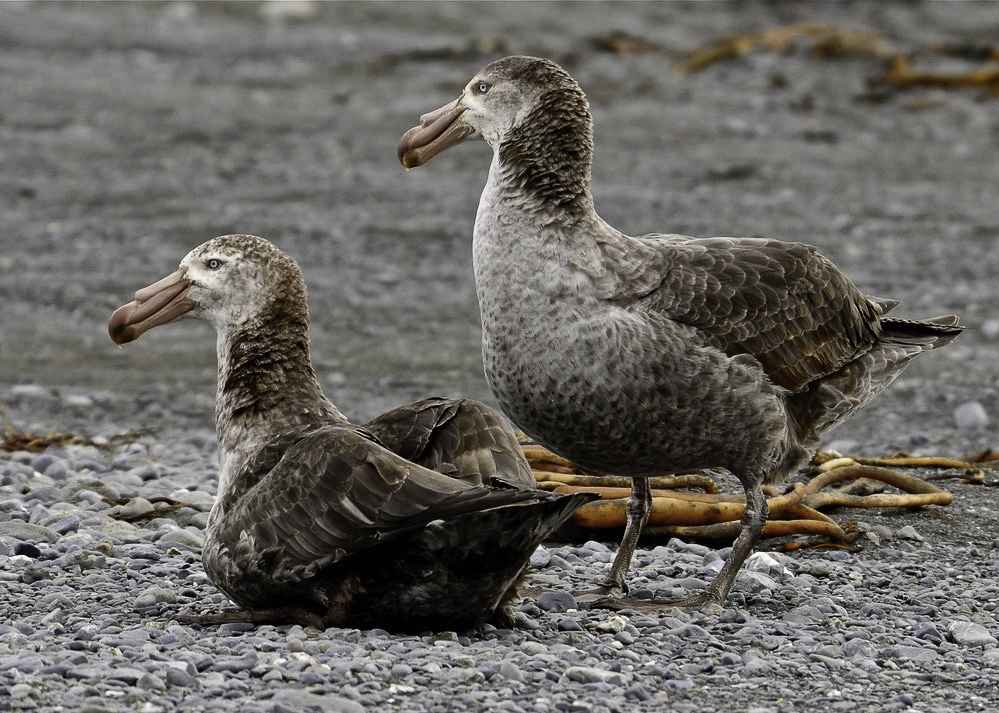 Our task must be to free
ourselves… by widening our
circle of compassion to embrace
All living creatures and the whole
of nature and its beauty.

This quote from Albert Einstein speaks truth to the human turmoil we find ourselves in today—just as it does to our perceptual failure to acknowledge the nuanced wonders of the natural world. As a naturalist, I’ve sought to understand how all the threads of any ecosystem are woven together to create the unique life tapestry we see before us. Scavengers, along with decomposers and detritivores, are essential in maintaining and sustaining the health and functional integrity of marine and terrestrial ecosystems. We often see vultures, gulls and other scavengers portrayed in the popular media as macabre and opportunistic predators, rather than as fascinating animals that play a key role in the ecology of natural systems. Many people recoil at the sight of a bloody-faced scavenger at a roadkill or a flock of gulls foraging through a garbage dump. Watching brown bears splashing through a river at the peak of salmon spawning evokes quite a different response than a black bear does when it takes advantage of an unsecured garbage can—yet both bears are scavenging. If you think about the global environmental degradation we have imposed on the “ natural” world, it becomes increasingly clear that Einstein’s words speak to our role as stewards and as fellow sojourners on Earth.

Scavengers are not simply nature’s “clean-up crew,” and their complex role in natural systems is dynamic and vital, reflecting millions of years of evolution. Mobile scavengers, both on the wing and on foot, accelerate nutrient cycling and redistribute energy and nutrients within ecosystems and across ecosystem boundaries. Not only is carrion a high-quality energy resource, it requires relatively little energy expenditure when compared to the high energy demands of predation. Given the energetic benefits of scavenging, most vertebrates will scavenge if presented with carrion. Opportunistic (facultative) scavengers utilize carrion when it is available or seasonally abundant. In the absence of carrion, opportunistic scavengers will rely on their skills as predators. We are now discovering that scavengers and decomposers reduce the environmental spread of pathogenic organisms and other toxic substances associated with decomposition. I’ll touch on this subject in relation to COVID-19 in a future ePostcard.

On South Georgia, most scavengers belong to the order Procellariformes, the tubenosed seabirds. The infamous giant petrels—the northern and southern giant petrels—are unique among tubenoses in having strong legs that allow them to walk well on land, which is presumably an adaptation for scavenging carcasses. We perceive our world visually, and scent plays only a minor role in our daily lives. Giant petrels use both their finely-tuned sense of smell and sharp vision to locate carrion on land or at sea. As you’ll remember from a previous ePostcard, they have tubular nostrils, and those in the family Procellariidae, the true petrels (northern giant petrels are featured in photos #1-6), have their nostrils united along the top of an extremely powerful bill. This highly-specialized bill serves multiple functions, including salt extrusion, enhanced olfaction (smell), and the hook-shaped upper bill allows them to grab slippery live prey (fish or squid) or tear into carrion. Given their sea-based lifestyle and salt-rich diet, tubenoses have specialized glands, located above the beak and just under the eyes, which filter out excess salt from their blood, liquifying the concentrate so that it can be ejected via the nasal tubes that are used for olfaction.

Although giant petrels have circumpolar breeding distributions, the population size of the northern giant petrel is much smaller than that of the southern giant petrel, and nearly half that total northern population breeds on South Georgia. Not surprisingly, the breeding season for South Georgia’s northern and southern giant petrels coincides with the breeding season for seals, penguins, and several smaller tubenose seabird species—a bounty for these ever-vigilant scavengers as they fly over or walk through the colonies searching for dead pups, abandoned penguin eggs or unwary chicks. Admittedly, giant petrels look a bit ghoulish with their blood-tinged feathers as they “attend” seal pup births to scavenge the afterbirth tissues.

The northern giant petrel breeding cycle begins about 6 weeks earlier than that of the southern giant petrel, with a single egg laid in late September-early October. Incubation requires about 2 months and the petrel chick takes about 4 months of parental care to fledge. During the breeding season, male giant petrels spend more time feeding the chick than females do. Males eat more carrion than females, with females predominantly feeding at sea on krill, fish and squid. Competition for carcasses can be intense, with dominant male giant petrels often excluding the smaller females from the feast. This may be one explanation for why the female giant petrel diet emphasizes live marine prey. Giant petrels have learned to follow fishing boats and cruise ships on the open ocean, swooping down to eat any discarded fish and or food waste thrown overboard. They are extremely aggressive and will kill other seabirds, mostly penguin chicks, sick or injured adult penguins (photo #4 shows a starving gentoo, with a pair of petrels) and the chicks of other seabirds, even small species of albatross. Skuas, which are in the same family as gulls, jaegers and terns (Laridae), compete with the giant petrels for carrion and are also dedicated predators in the breeding colonies. No, it isn’t “pretty” in our perceptual view, but it is how energy flows through complicated ecosystems in a harsh world where all that matters is the survival of you and your offspring. 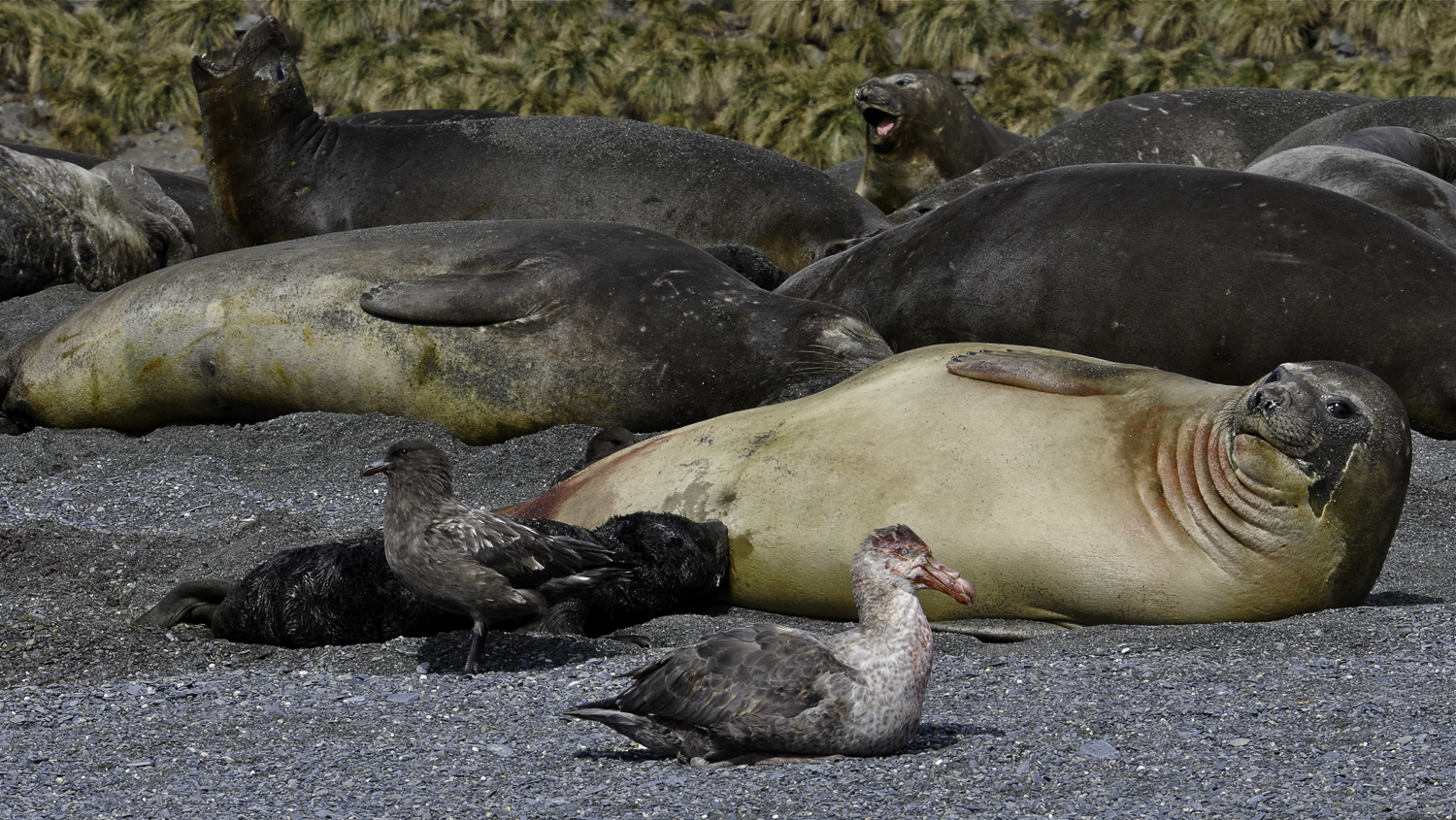 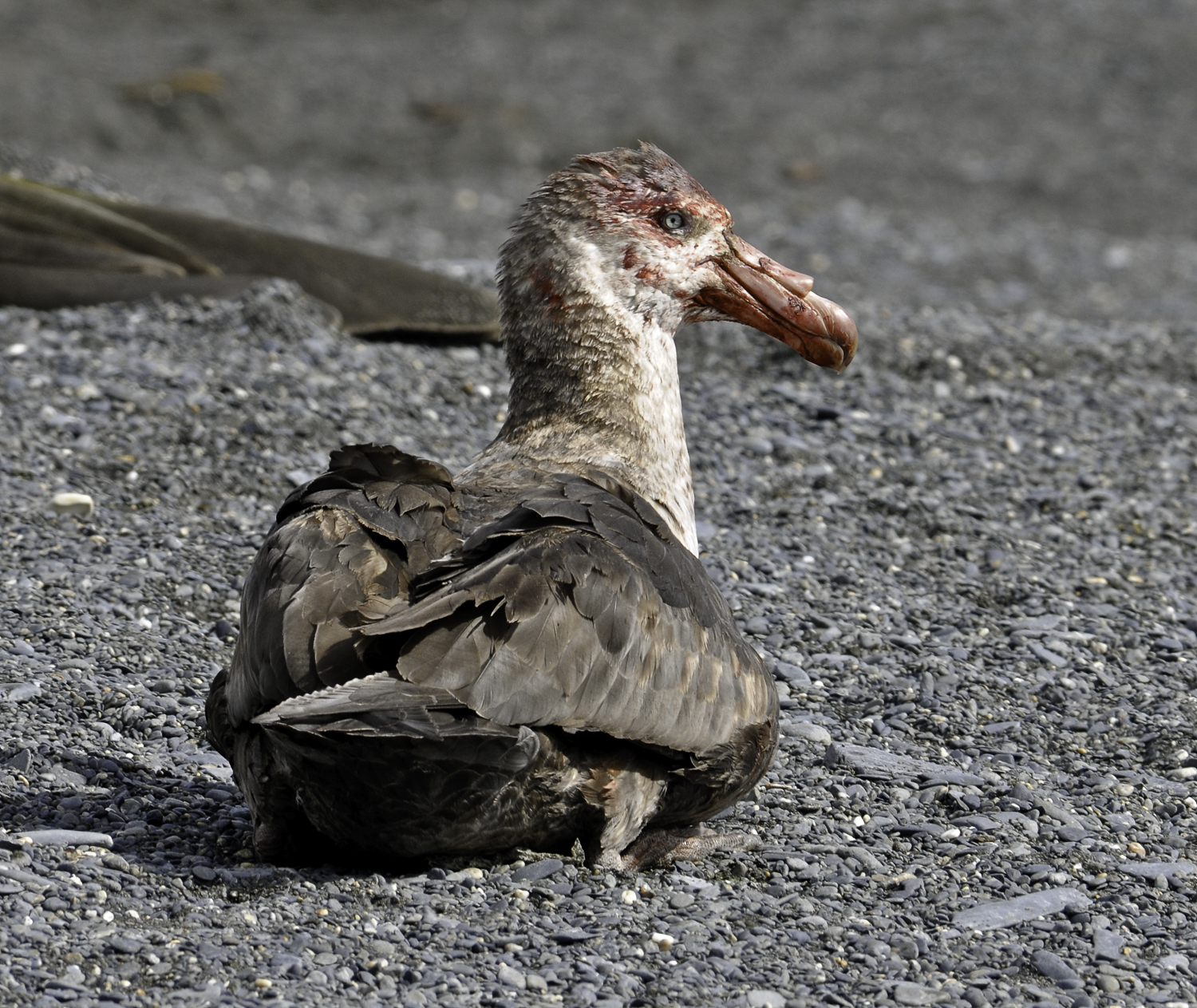 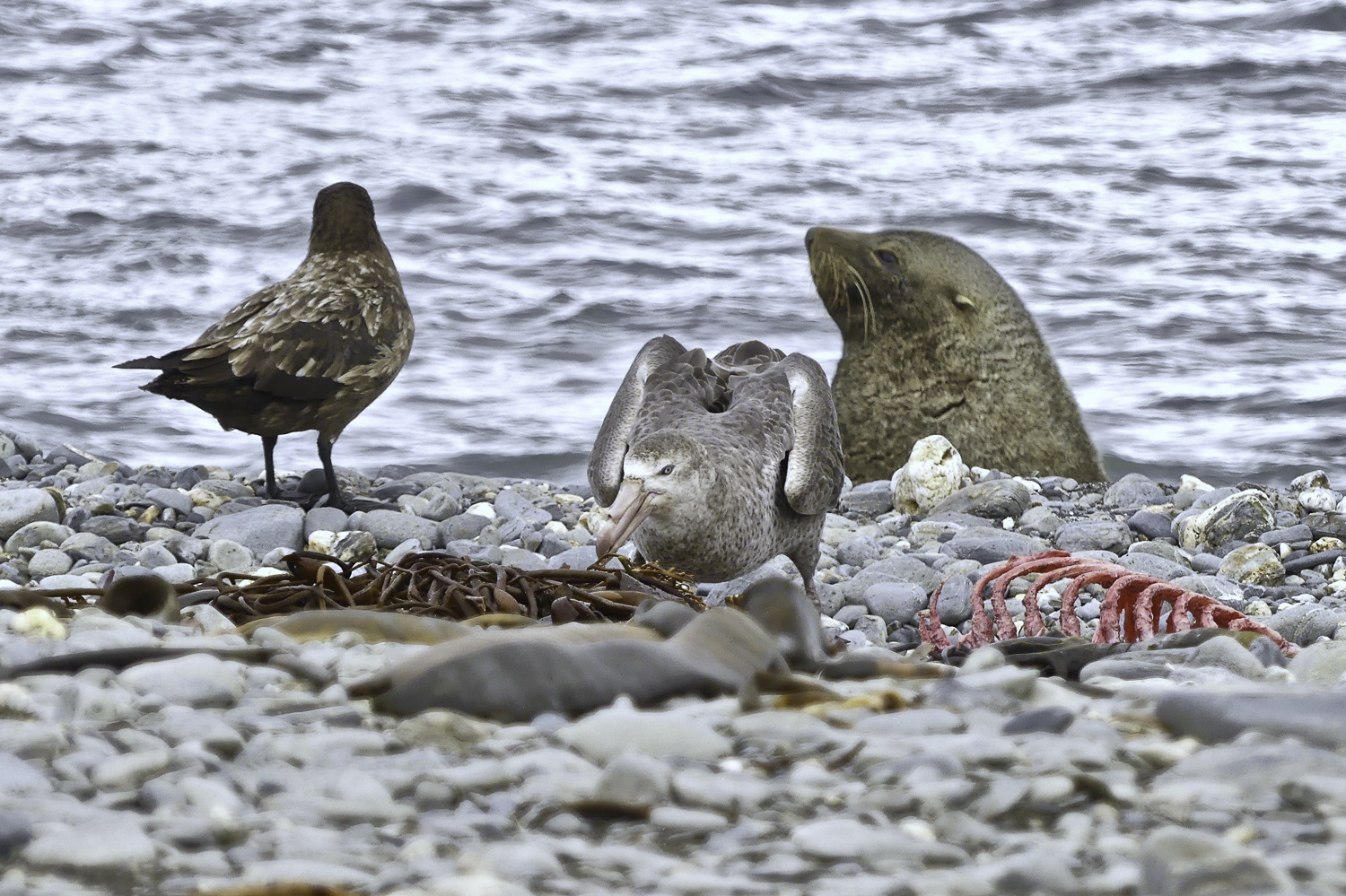 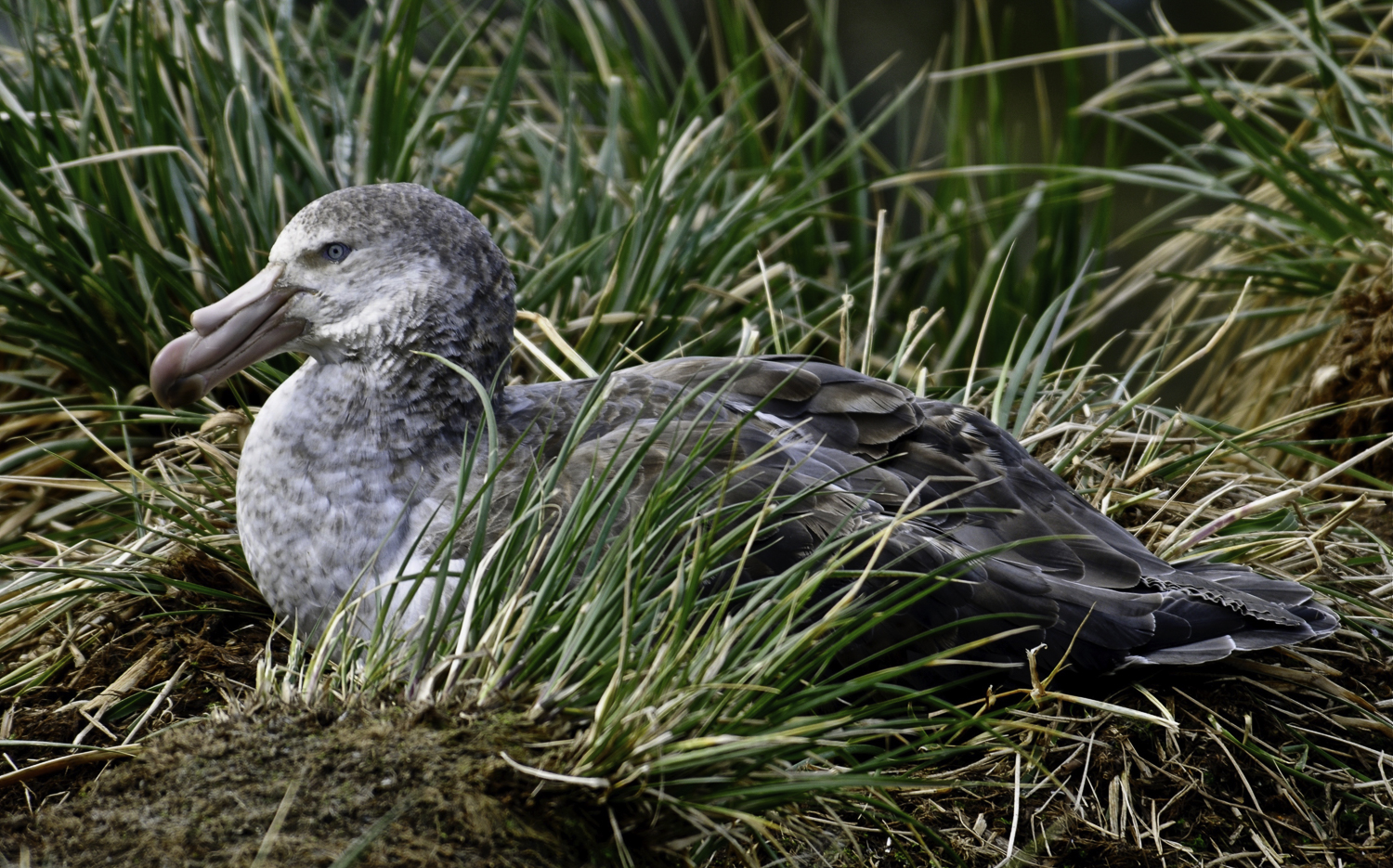