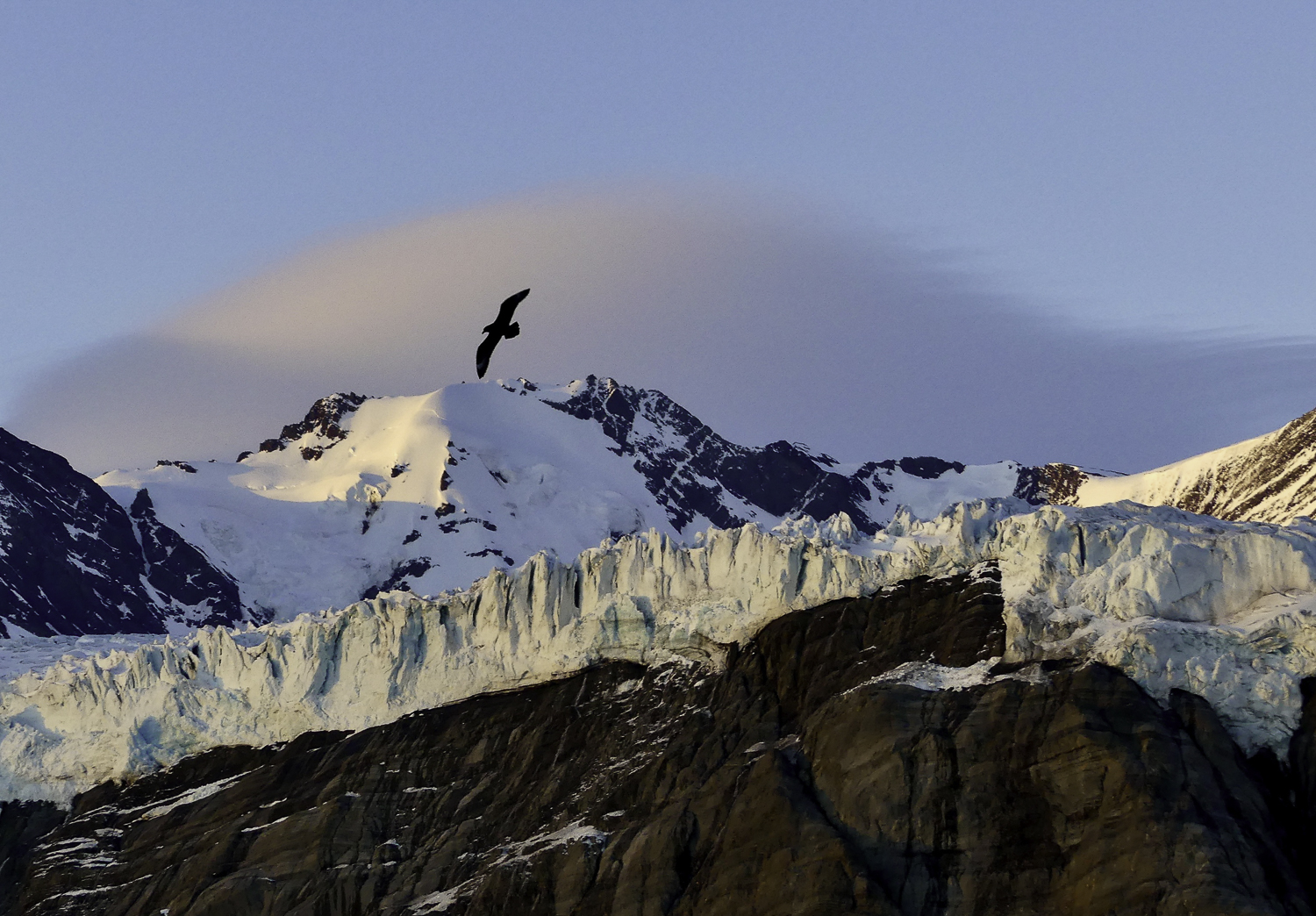 To a geologist, rocks are richly-illustrated narratives—stories of deep earth cataclysm and landscape transformation over billions of years. To a biologist, rocks and landforms provide the physical setting for the ecosystems and species they study. More than 40 years ago, fascinated by both science disciplines, I decided to interweave them in my own education to better understand the world around me. What is so compelling to me about South Georgia is that this tiny island is a microcosm of Earth’s history and the biological legacy of millions of years of evolution. Isolated and surrounded by the tempestuous waters of the Southern Ocean, South Georgia is graced by some of the world’s most beautiful alpine scenery and is equally renowned as an Antarctic oasis for its biodiversity. After tumultuous days at sea, your first glimpse of South Georgia seems like a mirage, with Mount Paget (at 9,678 feet) rising above at least 20 other peaks over 6,560 feet. I thought of it as a ghost ship the first time I saw it’s dark silhouette.

Let’s begin our geologic saga with an introduction to the biogeographical setting of South Georgia. Geologically speaking, the Southern Ocean is the youngest of the world’s 5 ocean basins and was formed when Antarctica and South America moved apart as a result of continental drift, creating the Scotia Sea and the Drake Passage. When you look closely at any natural landscape, you see that time and weather have wrought their transformational magic. South Georgia lies just south of the Polar Front (Antarctic Convergence) and generates its own weather in spectacular ways. Along the southwestern edge of the archipelago, the mountain ranges serve as barriers to free air flow, intercepting the low-pressure weather systems (depressions) that sweep eastward across the Scotia Sea. As these unstable air masses are forced upwards, they set the stage for the cold, cloudy, wet and windy climate that has shaped the South Georgia we see today over many millennia.

Stacks of wind-sculpted lenticular clouds build dramatically downwind of the mountains where the wind is thrown into a standing wave. Photo #2 shows an elegant lenticular cloud formation over the Allardyce Range. The moisture-laden air coming in from the west nourishes the large snow and ice fields that cover over 50% of South Georgia. The island’s exposed southwest coastline is cooler, damper and more extensively glaciated than the northern side of the island. The northern coastline is conspicuously milder and drier, with tussock-dotted grasslands and glaciers that have mostly retreated back from the sea and terminate on land.

To the northeast of the island, where the relatively warmer waters of the Antarctic Circumpolar Current meet colder waters that originate in the Weddell Sea to the south and southeast of South Georgia, marine ecosystem productivity benefits from favorable oceanic conditions created at the edge of the continental shelf, where depths drop rapidly to nearly 10,000 feet. The continental shelf itself is relatively wide, extending up to 100 miles out from the island in some areas. The shelf is mostly less than 650 feet deep, except for the deep submarine canyons, which are the offshore extensions of many of the glaciated fjords on the island—a near-perfect scenario for supporting marine and terrestrial biodiversity.

Rising straight out of the Scotia Sea, South Georgia’s 100-mile long bedrock spine—the magnificent Allardyce and Salvesen Ranges—define the emergent crest of the Scotia Ridge, a curving arc of submarine mountains some 2,700 miles in length that link South America’s Andes to the Antarctic Peninsula. The geologic story of South Georgia begins long before the Atlantic Ocean existed, when the continents of Africa and South America were part of a vast, continental landmass called Gondwana. South Georgia and the South Sandwich Islands owe their existence to the colossal tectonic forces that inexorably drive huge crustal plates across the Earth’s surface.

The roots of South Georgia’s mountains rise from the seafloor, but they were once part of a great mountain chain that bordered the Gondwana supercontinent. Ultimately, these plate tectonic forces powered the breakup of the Gondwana supercontinent, seafloor-spreading and the birth of the Atlantic Ocean (200 million years ago), and the plate-driven subduction violence that ultimately created the South Georgia “microcontinent.” The fragmentation of the Gondwana supercontinent and the subduction-triggered eruption of submarine volcanoes is “recorded” in an outcrop of a green, serpentine-rich rock called ophiolite in Larsen Harbour. Geochemical analysis of many of the most distinctive rock types that make up the South Georgia microcontinent match those of high-grade metamorphic rocks (folded metamorphosed slates, silts and greywackes) found in Cordillera Darwin in Tierra del Fuego and other regions in the southernmost Andes. The granites (igneous) and gneisses (metamorphic) that form the Savesen Range date from this era and are the island’s oldest rocks. South Georgia and the submerged mountains of the Scotia Ridge sit squarely in the path of the Antarctic Circumpolar Current—the “perfect storm” of conditions necessary for generating the broad-scale upwelling and mixing of the cold, nutrient-rich waters along the polar front. 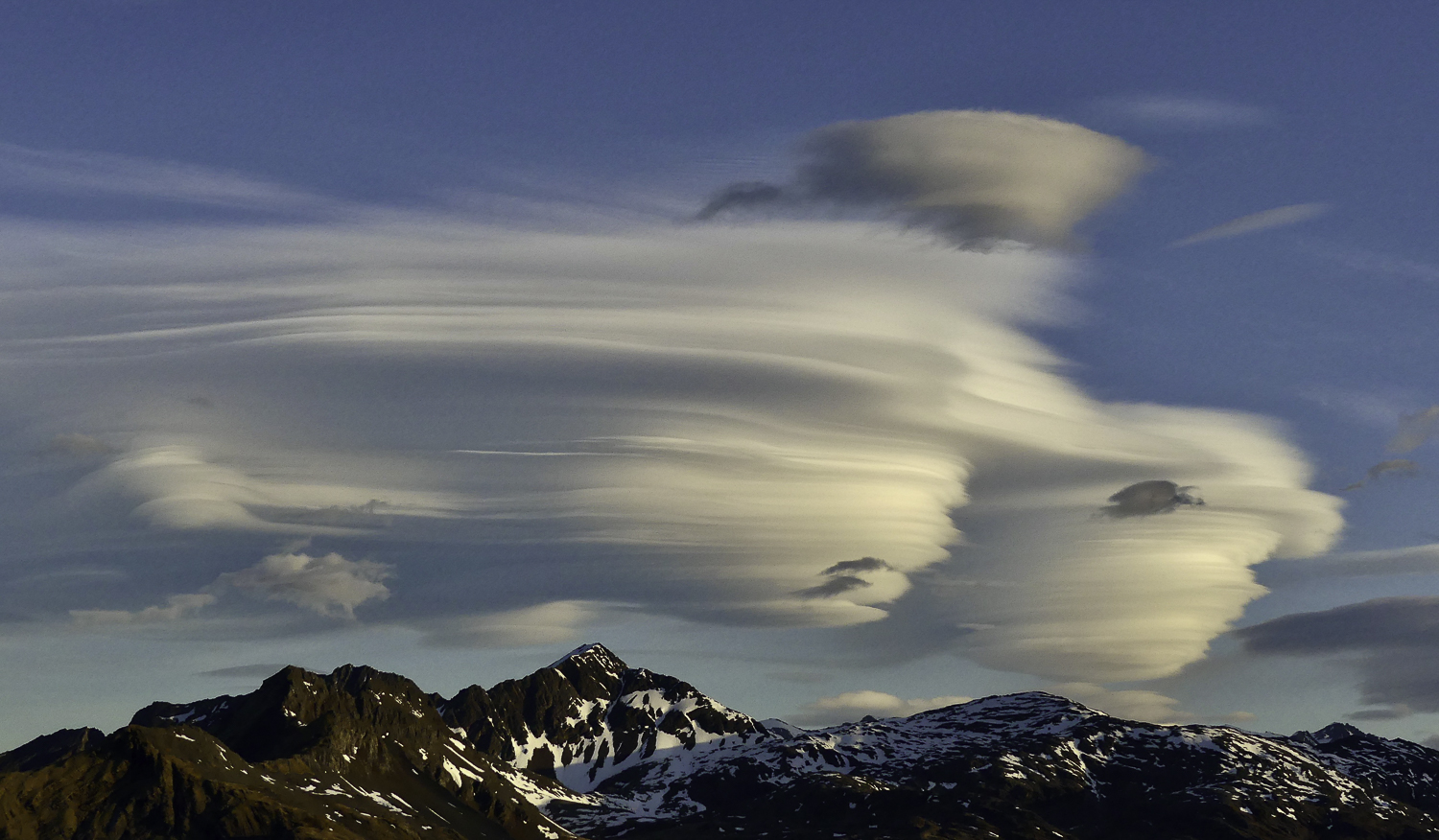 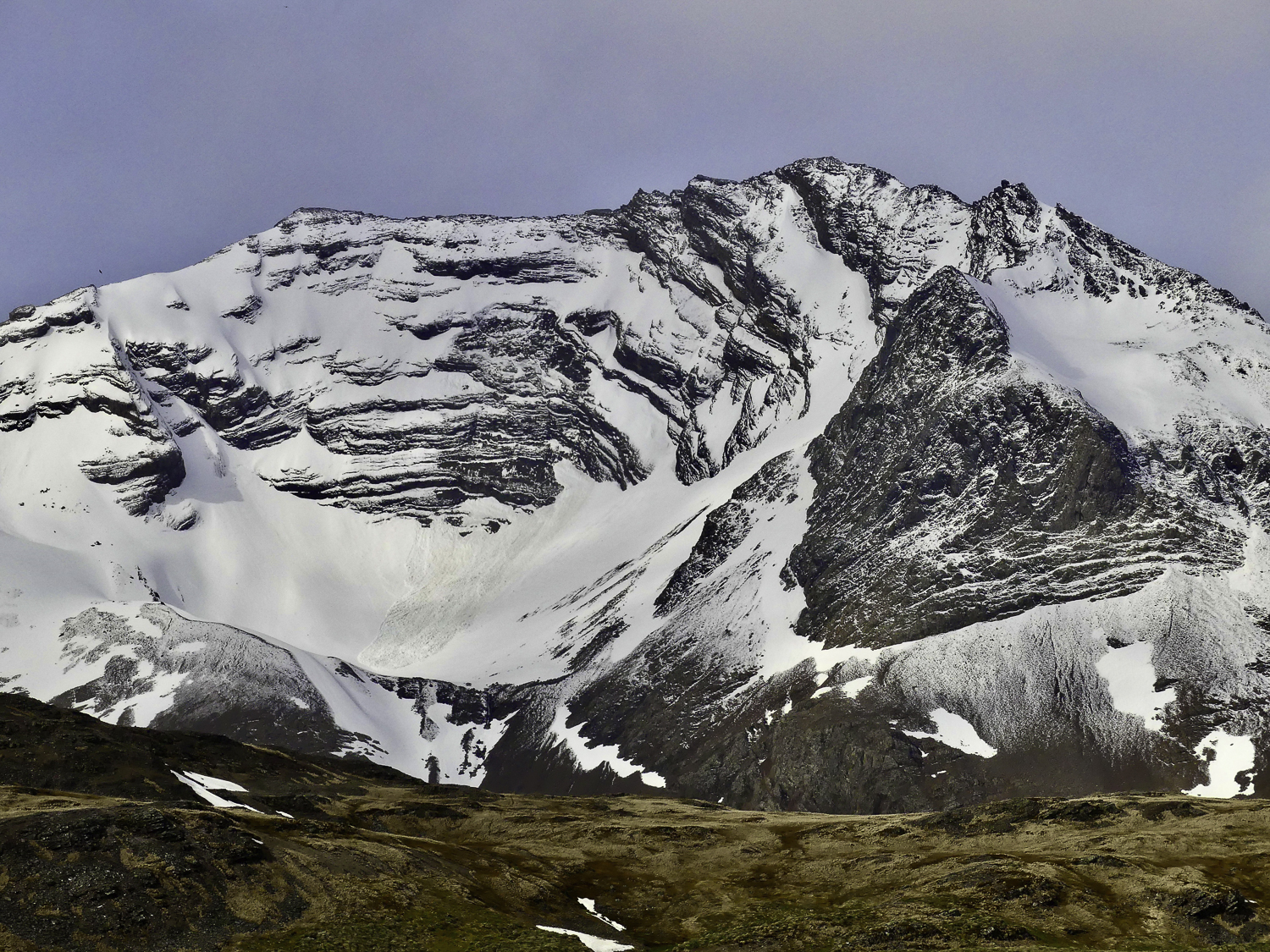 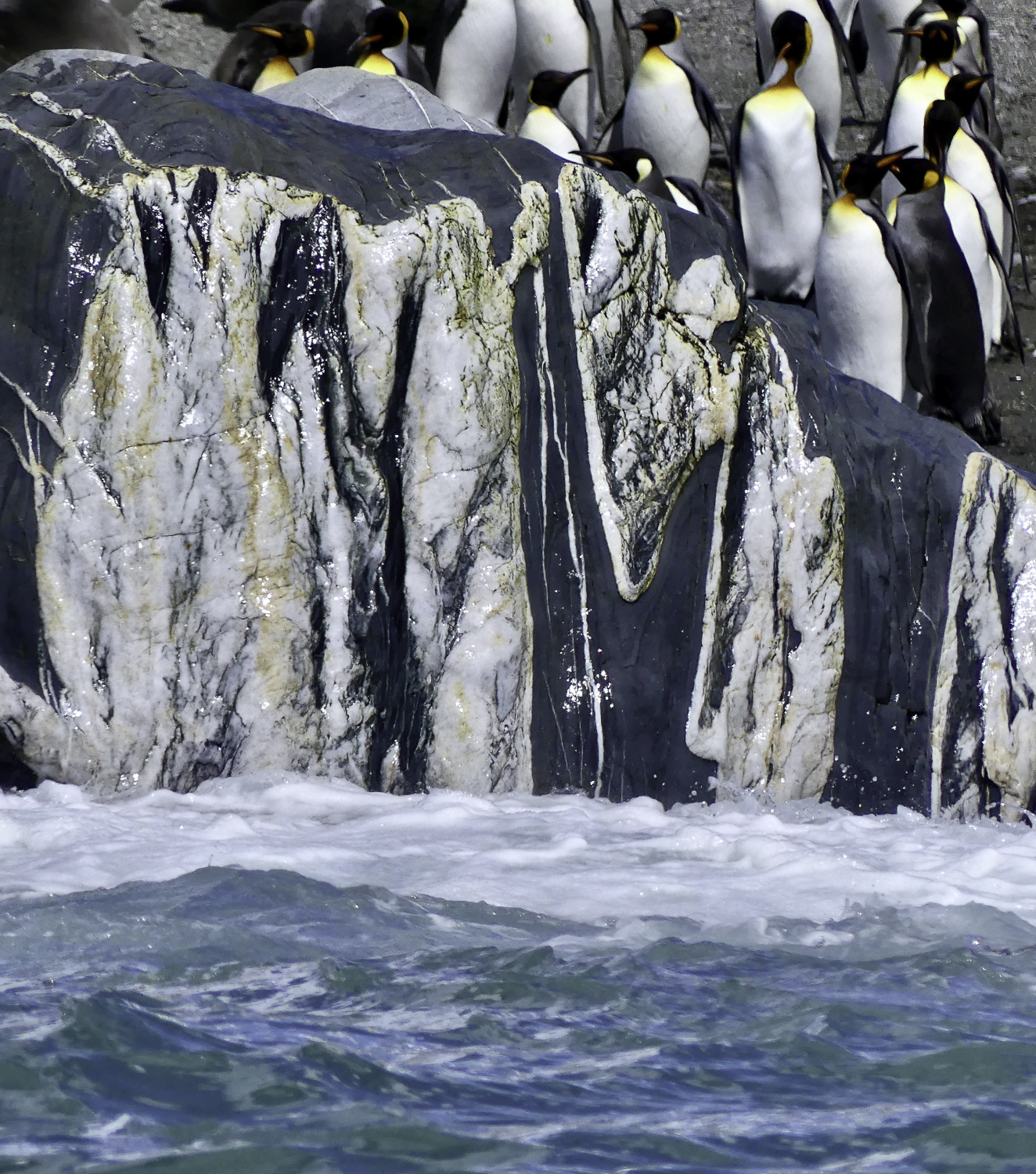 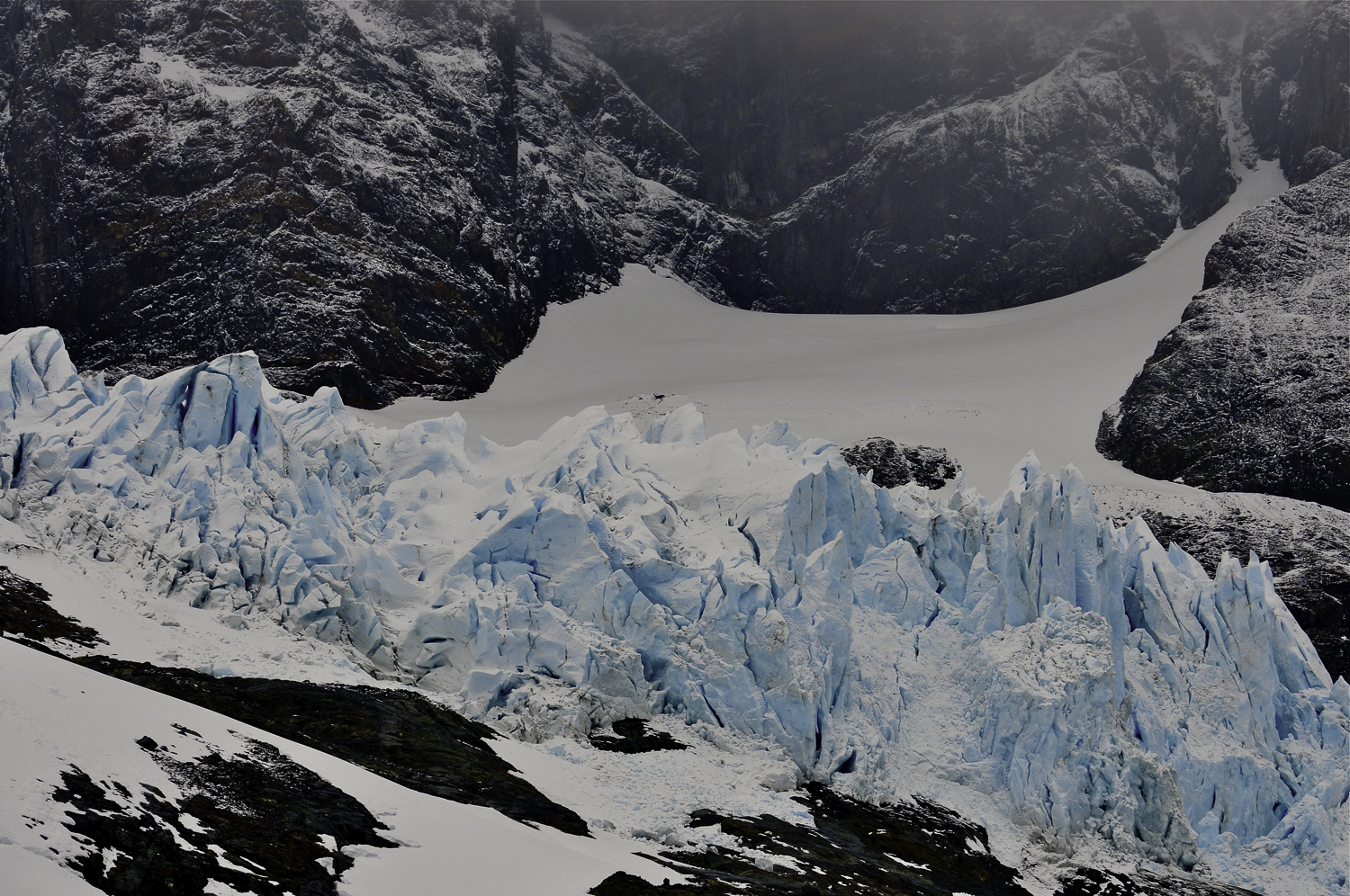 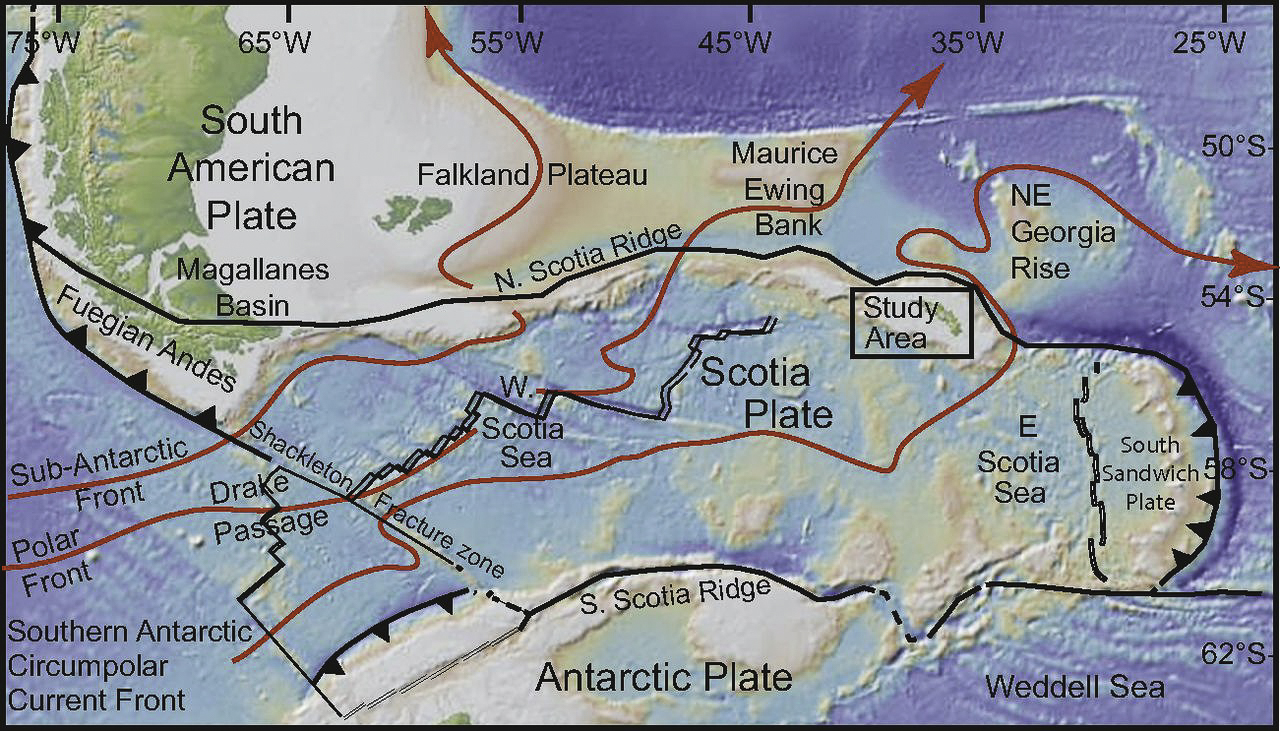